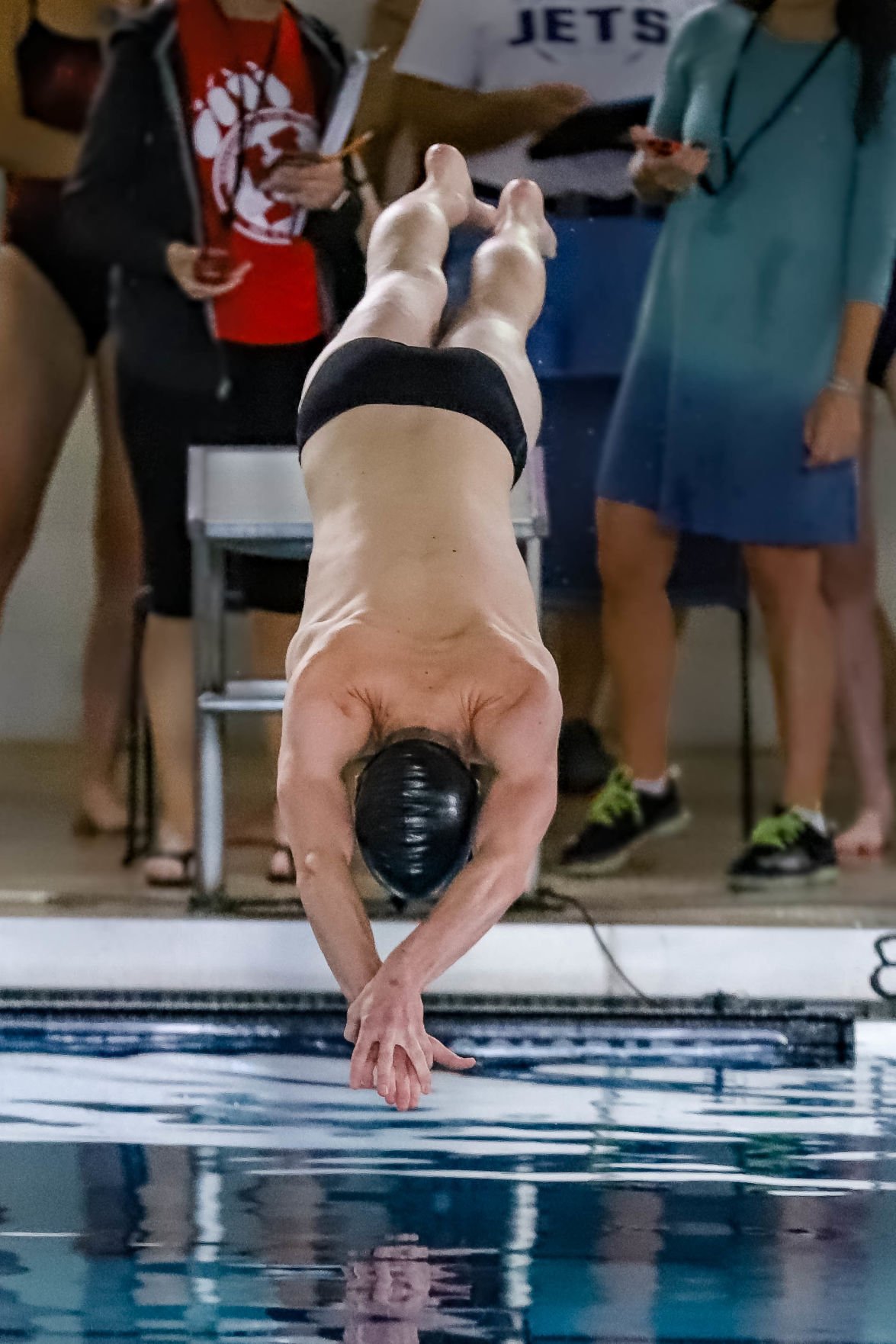 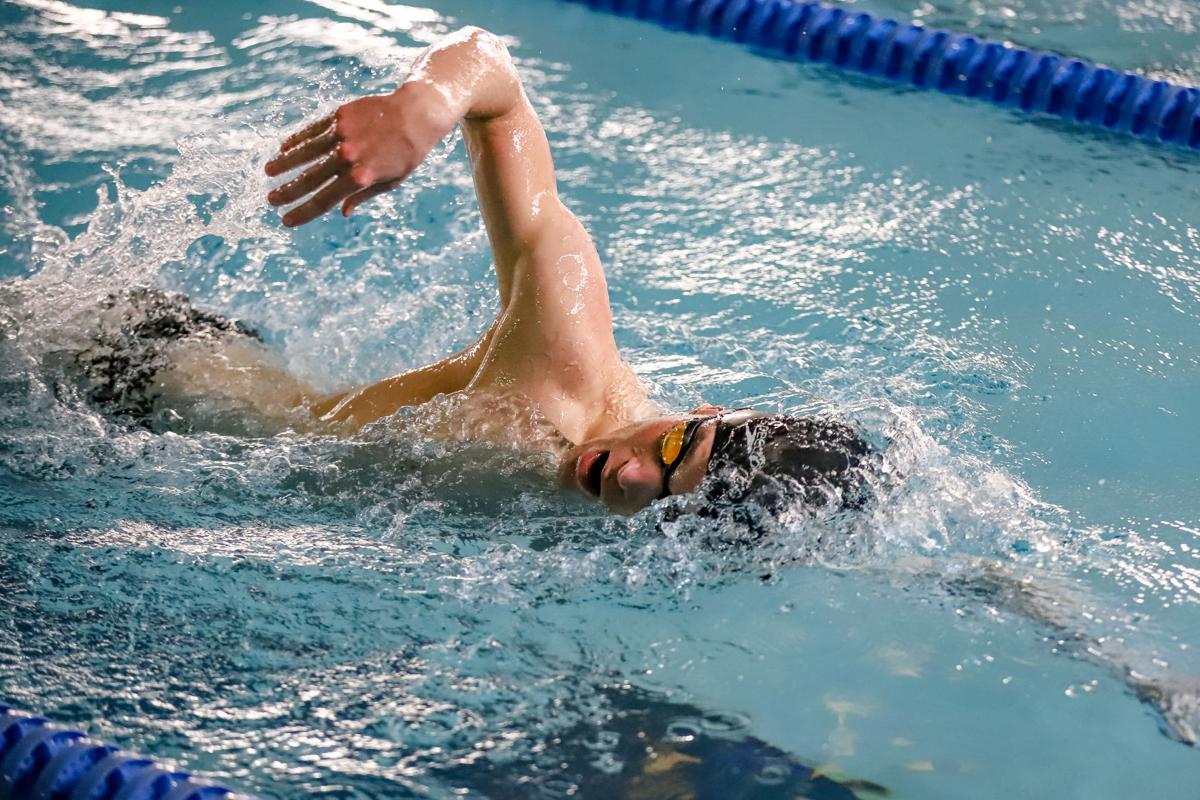 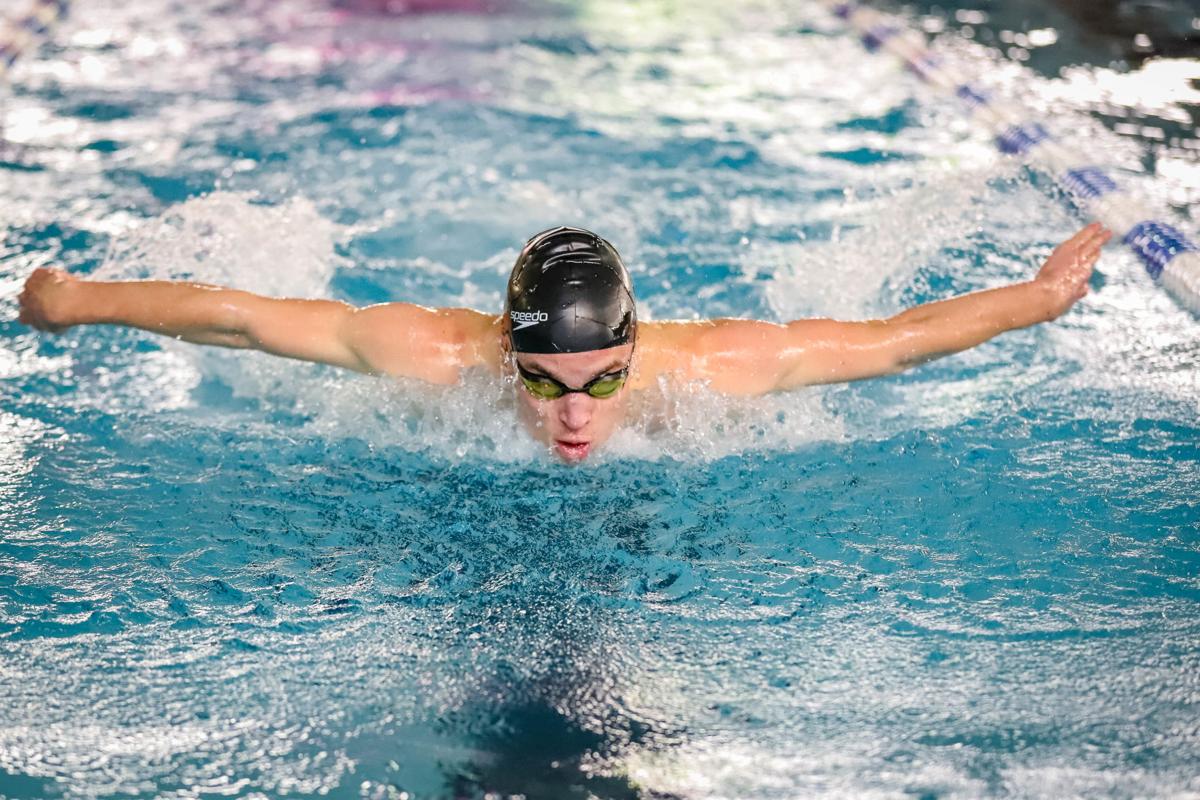 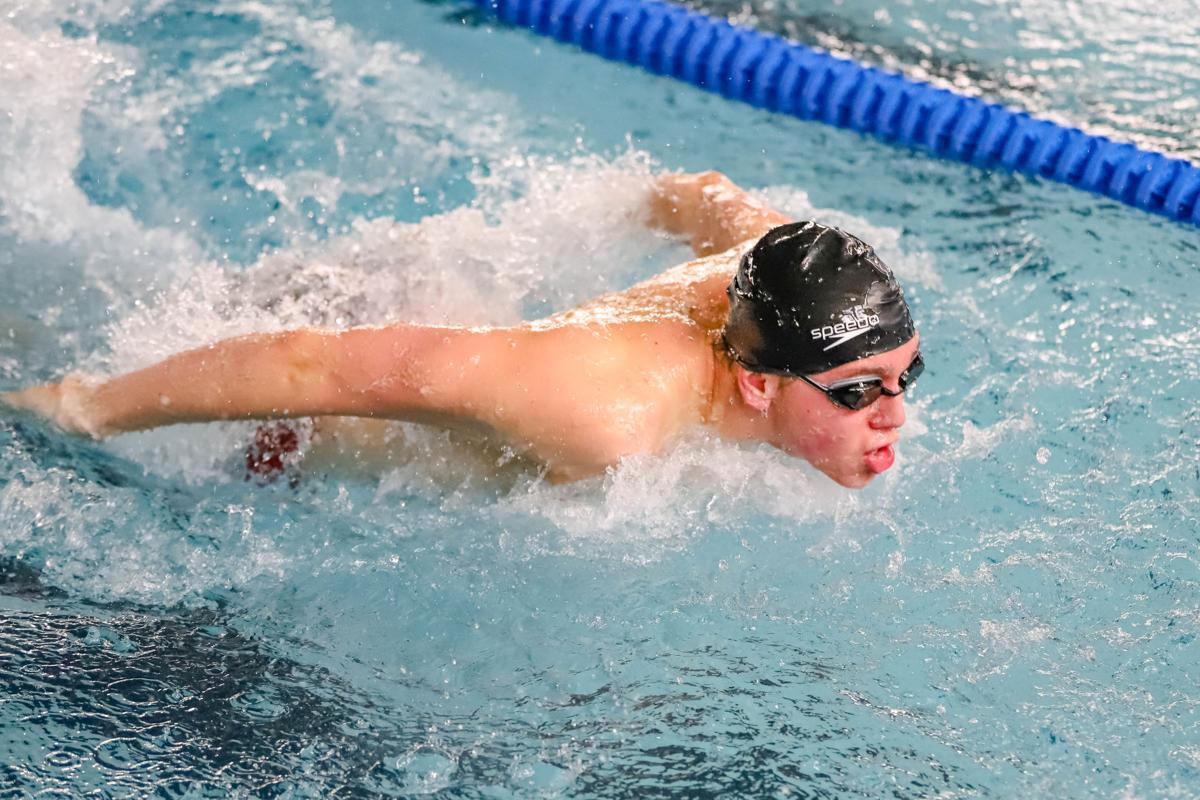 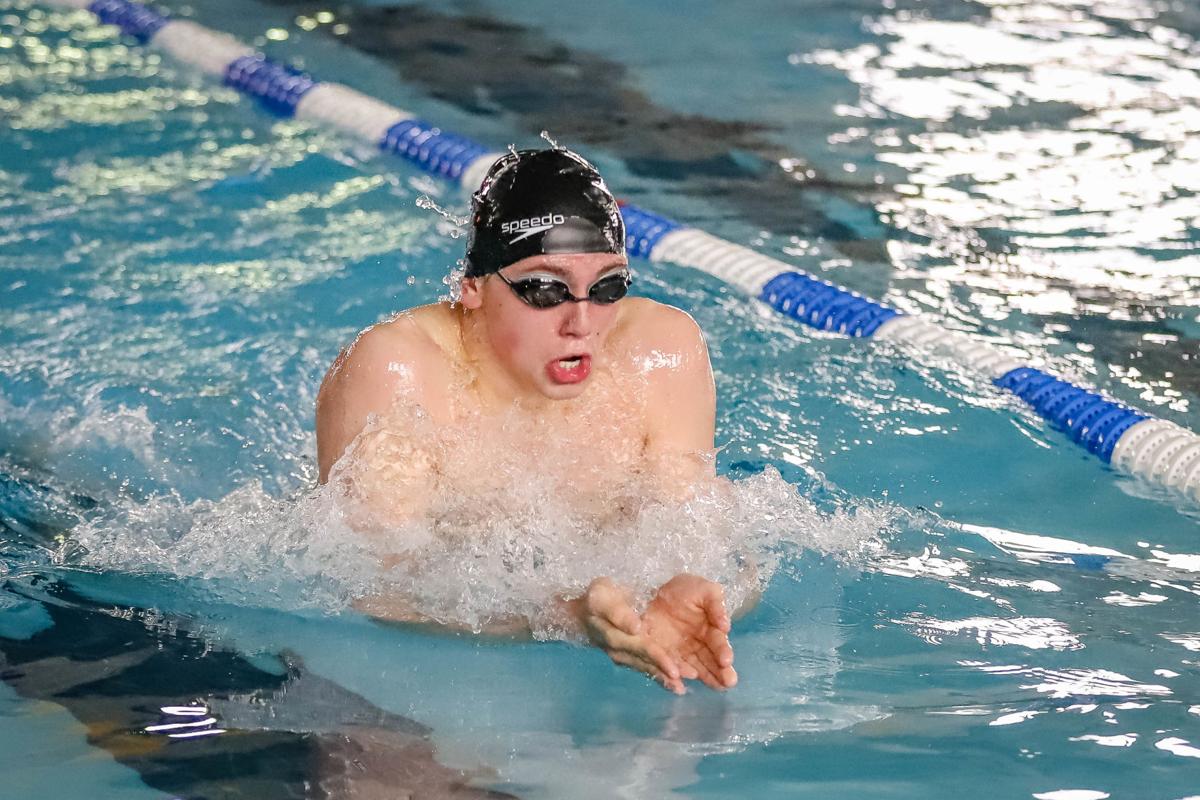 Freshman Tucker Valliere and senior Cameron Bailey took different paths to the Pisgah swim team. Both boys, however; have joined forces to be leaders in and out of the pool for a relatively inexperienced Bears team.

Both Valliere and Bailey are part of the Bears’ relay teams that already have automatic regional qualifying times, and both have also won most of the individual events they’ve participated in so far this season.

“They’ve definitely put in the hard work,” said Pisgah swim coach Courtney Phillips. “Our whole team has. We come here twice a week and then work Tuesdays and Thursdays on campus. We’re trying the best we can to improve everybody on the team and Cameron and Tucker both have helped out tremendously with that.”

Both swimmers, ironically, found their way to the pool after trying their hand at other sports, but finding their calling in swimming.

Valliere, the more experienced swimmer of the two, started swimming about three years ago with the Smoky Mountain Aquatics Club (SMAC).

“My big draw to that was that I didn’t make the Canton Middle basketball team,” Valliere said. “So I told myself that I was being drawn to swim. So it just kind of took off from there and I started seeing success, not only success in swim but just success all around. Swimming really brightens me and makes me who I am. It’s a big characteristic of me. It’s awesome to have this high school team, being with friends and meeting Cameron.”

While Bailey has only been swimming about a year, as a former cross country and track runner, he already had a lot of the necessary traits in speed and endurance.

Bailey took a similar path to Valliere in joining the SMAC, which has further strengthened his swimming abilities.

“My draw to it was we didn’t have indoor track,” Bailey said. “I originally came from cross country and track. So I came into the team last year at Pisgah and immediately loved it, found success in it. And then after last year’s regionals, I was contemplating whether to go to SMAC or stay with running and picking this up in the winter. I came to cross country season this past summer and our coach ended up quitting, so I decided to commit to SMAC, and it’s made me so much better, I’ve made some friendships. It enhanced my experience not just in swimming but in school, socially with friendships and all that.”

After finding their niche in it, Valliere and Bailey have both found different aspects of swimming they enjoy.

“I of course love the physical aspect, being able to challenge myself,” Bailey said. “But I also like the mental side, being able to push yourself through pain and all that and I can bring that into real life with school or just personal issues that I have.”

Valliere gave a fairly creative answer when asked what he enjoyed most about swimming.

In addition to their prowess in the pool, both have emerged as leaders for a Bears team with a large number of “novice” swimmers.

Valliere and Bailey are able to teach their teammates proper technique, often literally leading by example.

Valliere knows from his own learning experience how beneficial that type of teaching can be.

“Personally, I’m a very visual or hands-on type person,” Valliere said. “So I feel like it helps other people to see it, and then have me be in there and actually help perform what they’re trying to do if it’s a turn or a technique.”

In her first year as a swim coach, having two experienced, skilled swimmers to serve as leaders and help her teach the rest of the team has made a huge impact.

“Having these two here with me has been a tremendous help,” Phillips said. “They’ve shown me things that I didn’t know and they’ve really helped everyone out.”

While having a freshman as one of the team leaders might at times bring a different dynamic, for Valliere, the leadership ability he brings lies in swimming experience rather than age.

“It definitely is, but I try to take away that aspect of it that I’m younger than a lot of the kids I’m swimming with,” Valliere said. “It’s more that I’m just more experienced and that I’m just trying to help them in any way that I can.”

While both swimmers have their favorite events, they’ve brought added value in an ability and willingness to participate in different ones to allow the rest of the team to get experience.

At the recent Tuscola invitational, the Pisgah coaches asked Bailey to switch from his usual event, the 50-yard freestyle, and swim the 200-yard freestyle. He did, and took first place in two minutes flat.

“It’s definitely beneficial,” Bailey said. “Honestly, I’m more in it for the team and getting the most points possible instead of what I want to do. I obviously would love to do sprinting events, but if I need to do a distance event or anything, because I have that experience over some people, then I can give the points for the team. That’s really what matters in the end.”

As the Bears look to continue what’s been a strong season, and get as many swimmers to the state meet as possible, the leadership of Valliere and Bailey both in and out of the water will be critical.

Recruiting Ticker, Jan. 23: A few young QBs on the Huskers' radar screen for 2021, beyond