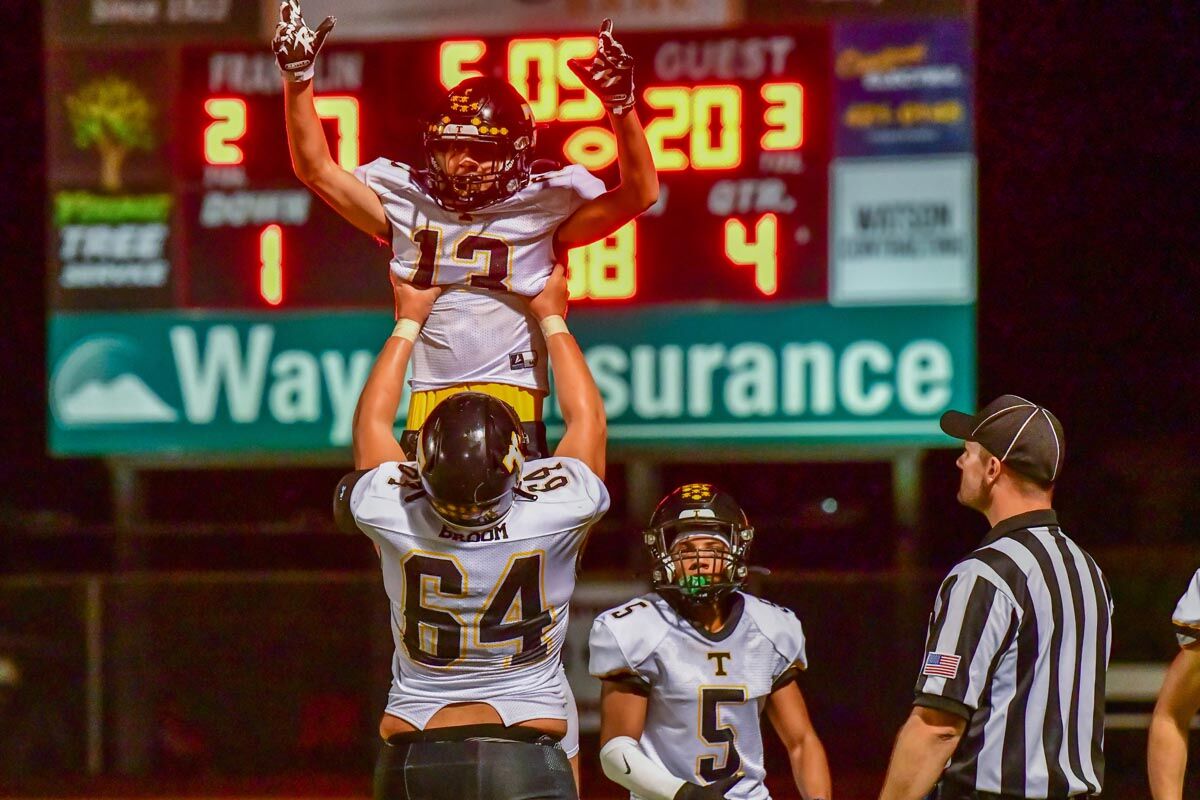 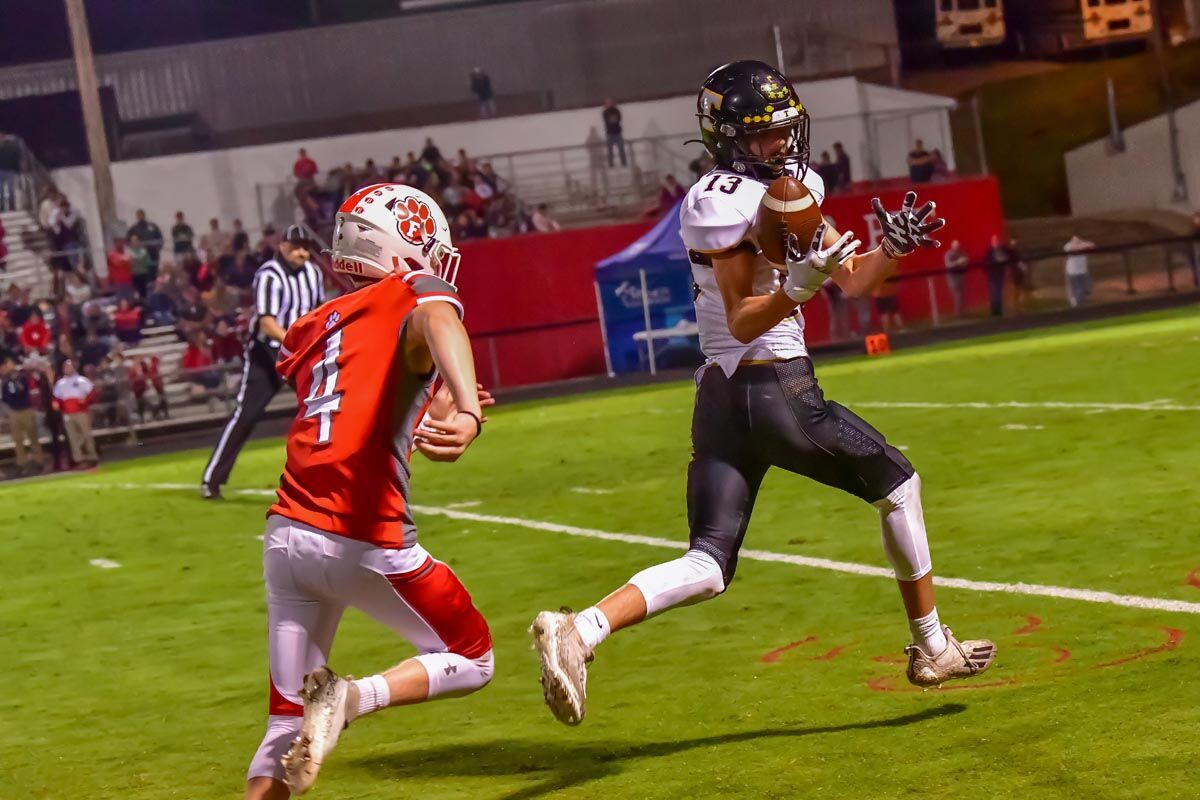 Tuscola sophomore wideout Bryant Oancea briefly bobbles a reception before securing it and flashing down the sideline on his game-winning 68-yard touchdown late in Friday’s thriller. 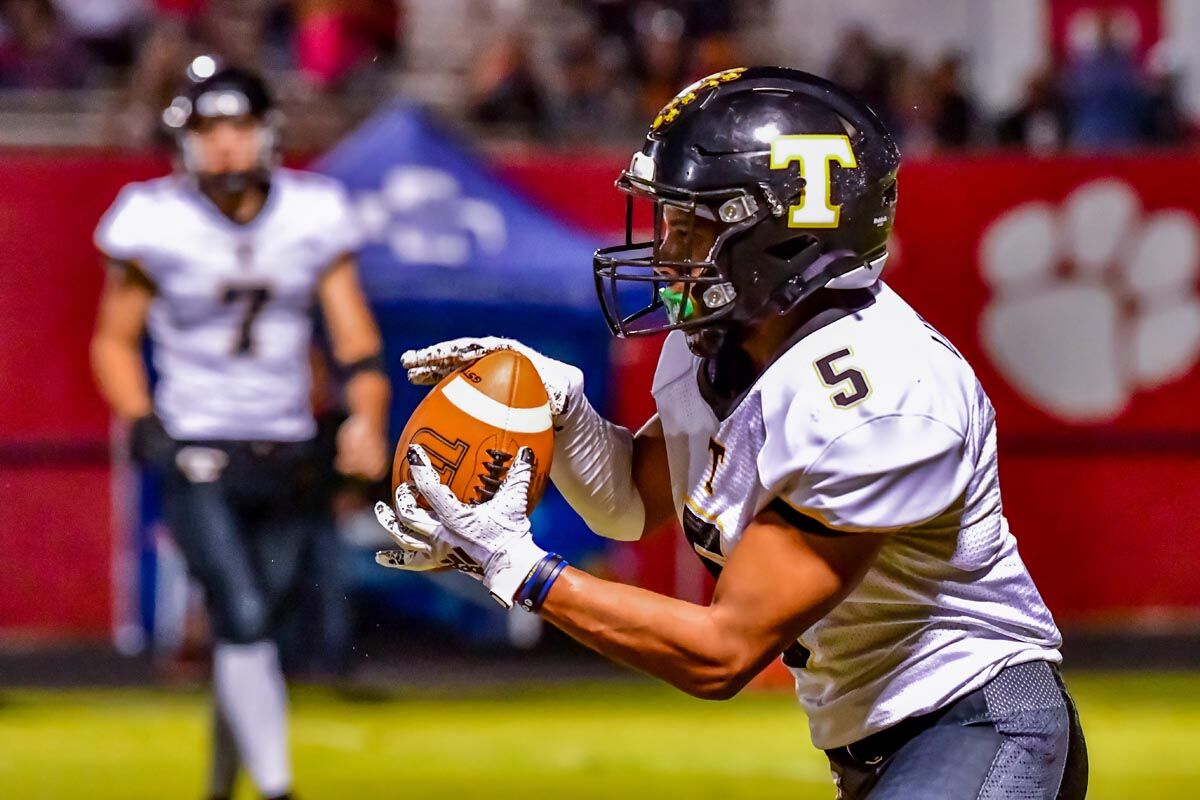 Tuscola’s Darien Lunsford secures the football Friday against Franklin. Lunsford put the Mountaineers’ first points on the board on a 97-yard kickoff return touchdown in the second quarter. 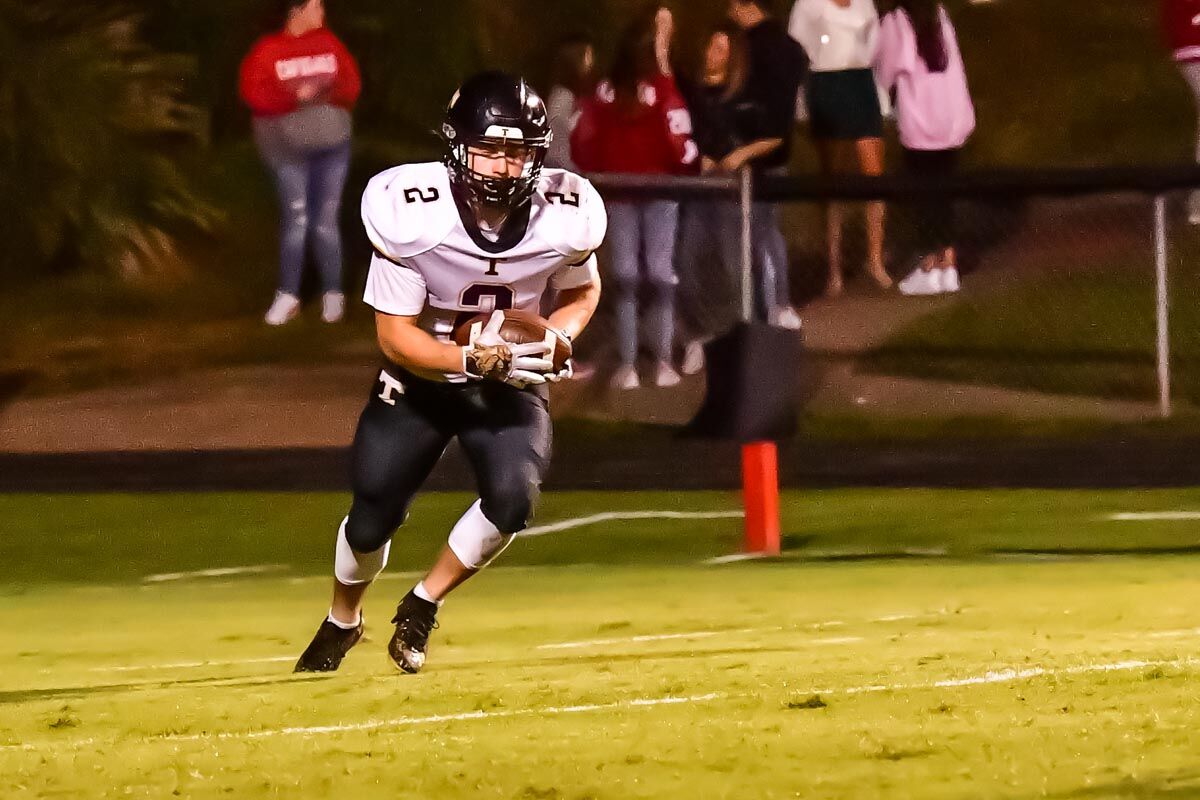 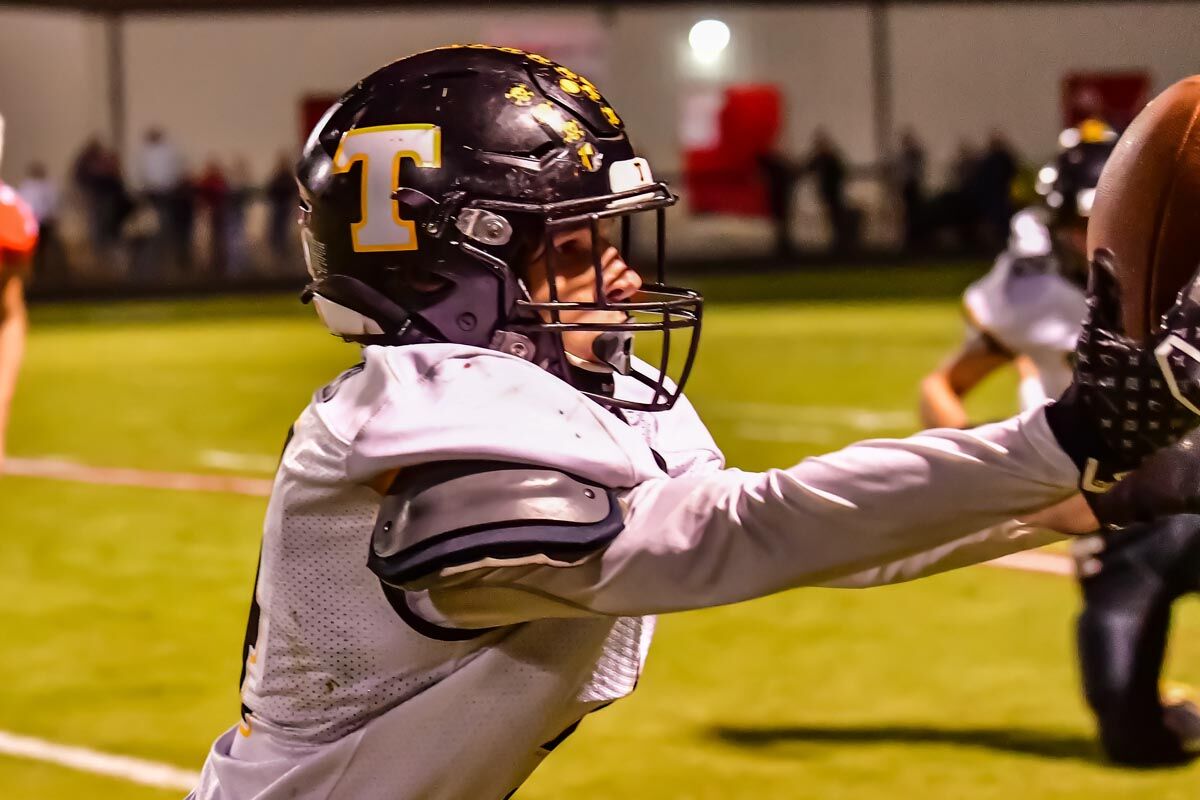 Tuscola senior outside linebacker Mason Baker hauls in an interception near the sideline following a blown Franklin punt attempt in the fourth quarter of Friday’s contest. 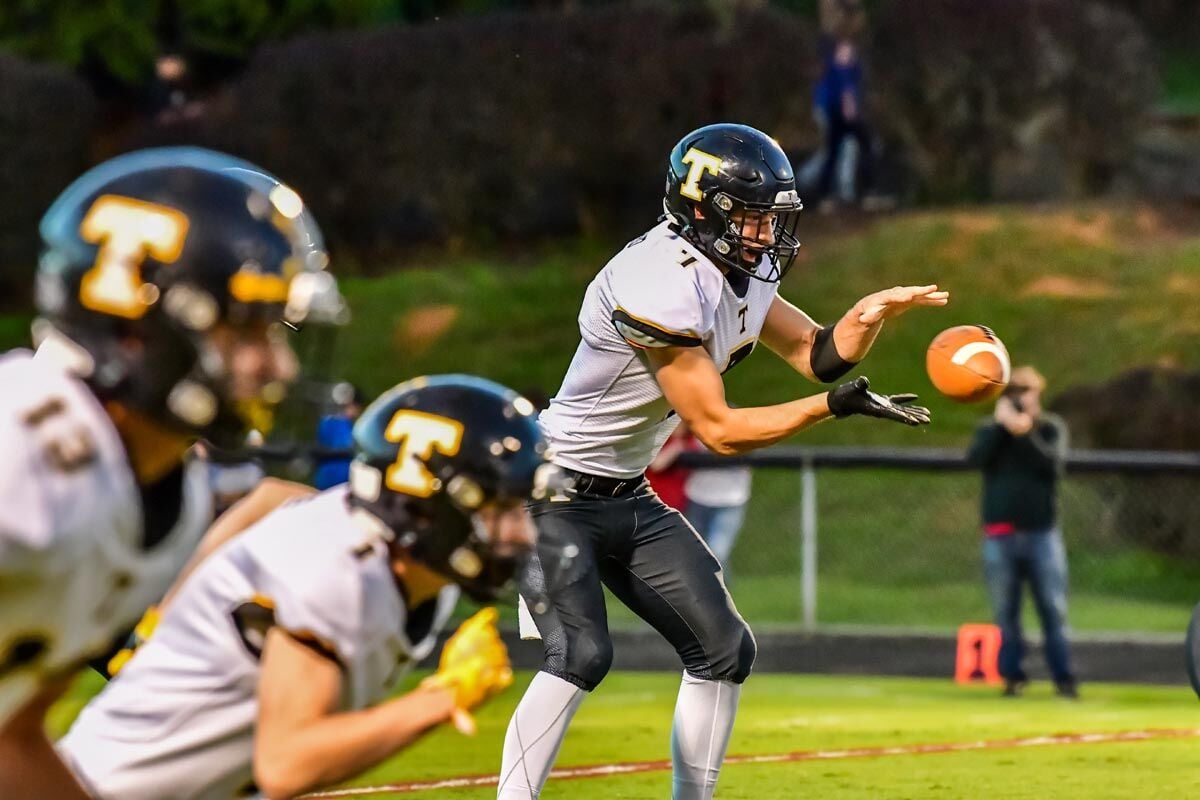 Tuscola sophomore wideout Bryant Oancea briefly bobbles a reception before securing it and flashing down the sideline on his game-winning 68-yard touchdown late in Friday’s thriller.

Tuscola’s Darien Lunsford secures the football Friday against Franklin. Lunsford put the Mountaineers’ first points on the board on a 97-yard kickoff return touchdown in the second quarter.

Tuscola senior outside linebacker Mason Baker hauls in an interception near the sideline following a blown Franklin punt attempt in the fourth quarter of Friday’s contest.

Under the lights on a chilly early fall evening in Franklin, the Mountaineers (3-2) opened Mountain Seven play with a 21-17 road victory over the previously undefeated Panthers (4-1) in nail-biting comeback fashion.

After trailing 17-7 early in the fourth quarter, Tuscola sophomore wideout Bryant Oancea bobbled a pass, secured possession and streaked down the sideline for a 68-yard touchdown, giving the Mountaineers their first lead of the game with 5:05 to play, a lead they’d never surrender.

“It was real nice, it was team effort to be honest,” Oancea said. “We all played hard, we all tried our hardest and we never gave up, so that was the best part.”

After the Panther defense opened the game with a stop, Franklin put together a 12-play, 72-yard touchdown drive to take a 7-0 lead towards the end of the first quarter.

The Mountaineers were forced to punt two more times before Franklin drove down and had a first and goal from the 10. Tuscola’s defense came up with a stop on third and six and the Panthers settled for a field goal, leading 10-0 with 3:20 left before halftime.

But Tuscola senior Darien Lunsford answered right back with the special teams spark the Mountaineers needed. Lunsford fielded the kickoff at the three, burst through a seam on the right side and turned on the jets, outrunning everybody for a 97-yard touchdown. Junior kicker Nolan Martin nailed the extra point and Tuscola suddenly trailed by three.

On Franklin’s ensuing possession, Lunsford nearly came up with a game-changing interception, breaking up a second down pass to help end the drive and send the game to halftime.

Tuscola forced a three-and-out to open the second half and drove deep into Panther territory before a fumble inside the 10 gave it back to Franklin.

The Panthers bled the clock on a methodical drive that lasted into the fourth quarter. With 11:53 to play, Franklin senior running back Kellen Stiles bounced his way into the end zone from seven yards out to extend his team’s lead to two possessions at 17-7.

Again, Tuscola’s attention to detail on special teams provided an electrifying answer. This time, it was junior wideout Jett Benson who made a kickoff return house call. Benson exploded through another gap on the right side and dashed 98 yards to pay dirt, bringing the Mountaineers back within three.

“We had kickoff return left called and I saw my blockers go and then somebody from Franklin fell down,” Benson said. “It just opened up like the Red Sea and I ran right through it.”

Then, on an important Franklin third and two, Tuscola junior middle linebacker Jourdyn Butler answered the bell, coming up with a stop in the backfield to force a punt. The snap sailed over senior punter Erick Munoz’s head and after managing to pick it back it up, he panicked with the Mountaineers bearing down on him. Running towards the sideline, Munoz flipped the football up and senior outside linebacker Mason Baker snatched it out of the air for an interception.

Tuscola took over at the Franklin 25 but didn’t advance past the 18. On third and three, Oancea had a chance to secure a short first down reception but the ball slipped through his hands. Nolan’s 35-yard field goal try was off slightly left and the Panthers clung to a three-point lead.

The Mountaineer defense rallied once more and came up with a stop to give the offense another chance at seizing a late lead.

“Our defense was on the field a whole lot and they just held on, just kept fighting away,” Brookshire said. “Right now, we’re 1-0 in the conference and that’s what we wanna be.”

Tuscola started its drive with a false start and faced a first and 15 from the Franklin 38. With just over five minutes left, Brookshire decided to take a shot, a decision that ultimately led to victory.

“The corner was at six yards and he’s playing him inside leverage and we’d been waiting on that look all night,” Brookshire said. “We got that look and we just hit him and we got an opportunity to do it and the Lord was looking after us.”

Senior quarterback Jared Penland delivered a strike towards the sideline and Oancea did the rest on the game-winning 68-yard touchdown strike.

“Well, it feels complicated, but we’re still working on it and we’re still pushing to be the greatest team,” Oancea said. “We’re still trying the hardest we can, so hopefully come out on top.”

With 5:05 left on clock, the home team was far from out of it. Looking for some homecoming magic, the Panthers converted a pair of short fourth downs, the latter of which gave them a first and 10 chance from the Tuscola 28 with 1:28 to go. Franklin called its final timeout.

On third and six with the clock winding down rapidly, Panther senior quarterback Chris McGuire lost his footing and went down deep in the backfield. The fourth and long pass fell incomplete and as the Franklin faithful began streaming out, Penland took a knee and the visitor’s sideline went wild.

“We’re 1-0 in conference and that was our goal, to come up here and beat them on their own field,” Benson said. “I can’t even explain it, it’s great.”