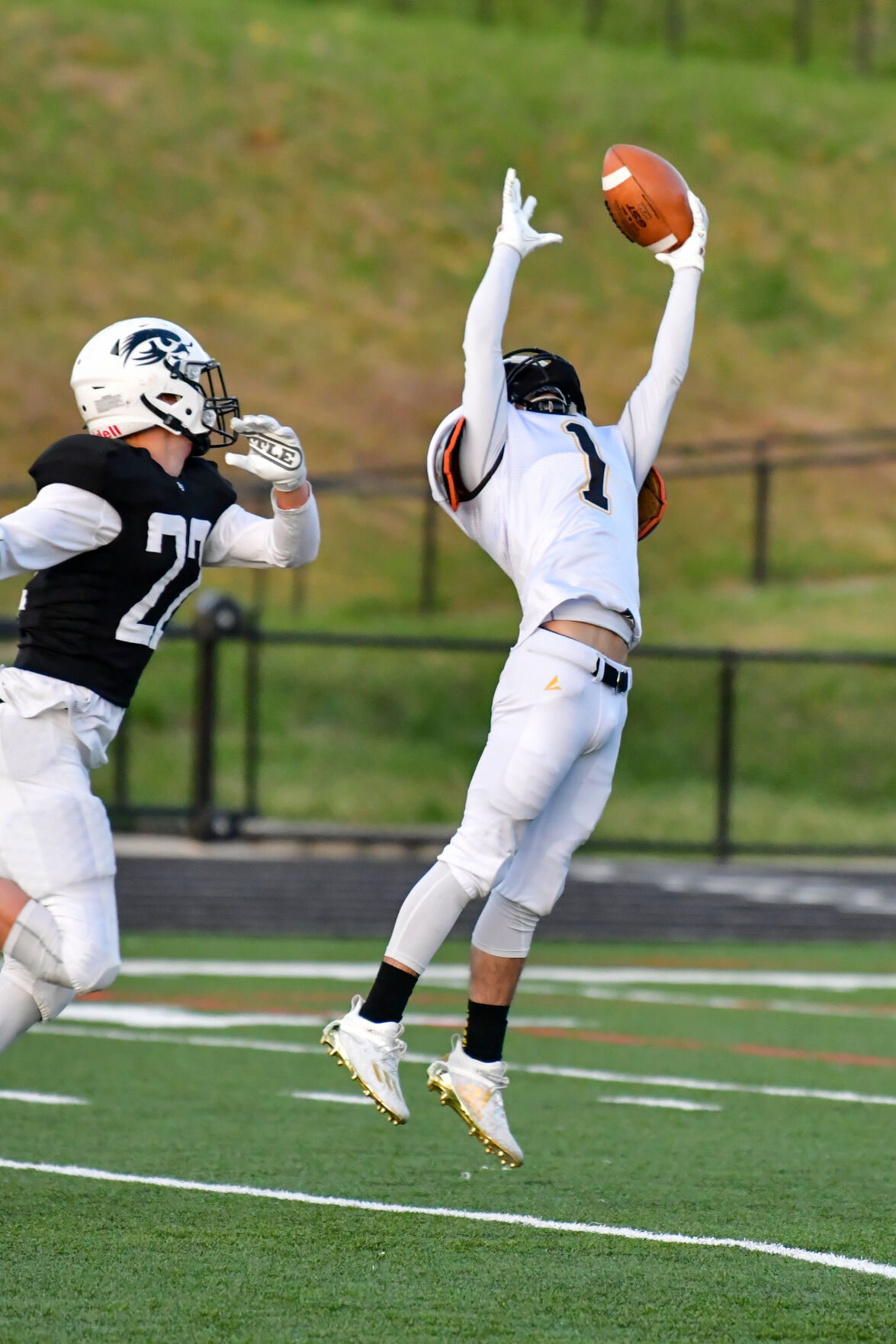 FINAL PUSH — Tuscola’s Jared Penland hit Jesse Delcambre for a seven-yard touchdown pass in the fourth quarter to put the Mountaineers ahead by 18 points, with a final score of 24-6. 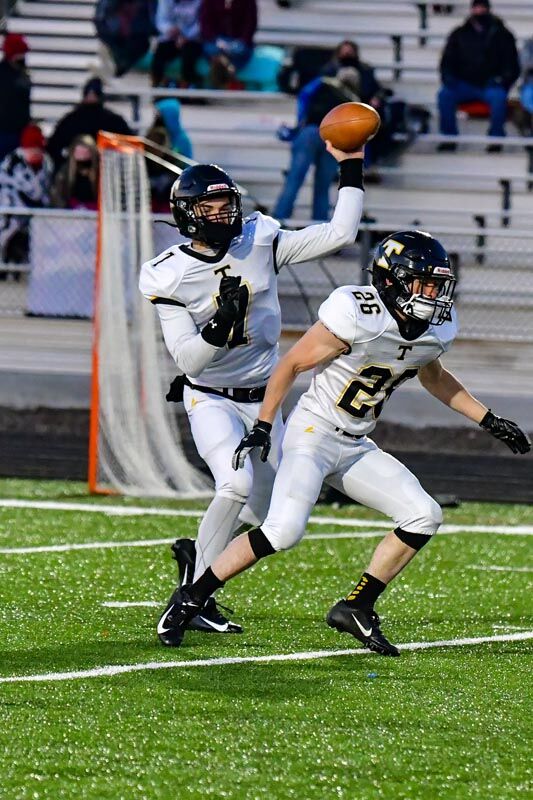 DOUBLE TROUBLE — The duo of Jared Penland and Garret Fox did most of the damage during a second-quarter drive that resulted in a field goal.

FINAL PUSH — Tuscola’s Jared Penland hit Jesse Delcambre for a seven-yard touchdown pass in the fourth quarter to put the Mountaineers ahead by 18 points, with a final score of 24-6.

DOUBLE TROUBLE — The duo of Jared Penland and Garret Fox did most of the damage during a second-quarter drive that resulted in a field goal.

Tuscola’s Mountaineers continued their winning ways with a convincing 24-6 victory over the North Buncombe Black Hawks on Friday in Weaverville.

Tuscola is coming off last weeks’ equally impressive win over West Henderson, earning the team’s second straight “W.” Chalk this one up to the defense as their stellar play held the potent Black Hawk offense to six points. The Black Hawks came into the game averaging over 32 points per game.

Bucking conventional wisdom, North Buncombe chose to receive the opening kickoff, running out to the 27-yard line. After running two plays, they called for a time out. After four more plays they called their second time out. Something was obviously confusing for the offense. A fourth down punt was blocked and shanked and The Mountaineers took procession on the Black Hawk 30-yard line.

The Mountaineers wasted no time and took advantage of the good field position, and three plays later were in the end zone. Garrett Fox ran it in from the 18-yard line.

North Buncombe went on an 11-play drive that ended with a fourth down incomplete pass. Key plays were made by Mason Baker and Darien Lunsford, who defended third- and fourth-down pass attempts.

Tuscola then drove the length of the field, reaching the four-yard line, but an illegal procedure call derailed the drive. With the duo of quarterback Jared Penland and Garret Fox doing most of the damage, the drive resulted in a field goal by Wesley Leichessenring with 8:20 remaining in the half.

After a fourth-down incompletion, North Buncombe opened its possession with a 40-yard completion to the 20-yard line, eventually punching it in for a touchdown with 59 seconds remaining in the half. The PAT was no good.

Disaster was avoided on the ensuing kickoff. Tuscola couldn’t cover the kickoff and North Buncombe recovered on the Tuscola 36-yard line. However, Kain Fortney came up big with a second-down interception, returning the ball to Tuscola’s 35-yard line.

Because of the Black Hawks’ decision to receive the ball at the start of the game, Tuscola received the second half kickoff. Darien Lunsford returned the kick to the 25-yard line. From then Penland and Fox took control.

In a 13-play drive the Mountaineers ran the ball 12 times, culminating in a four-yard rushing touchdown by Fox.

Fox rushed for two touchdowns and has 30 carries for 210 yards.

“Listen, he’s probably 5-7, 145 pounds — pound for pound he’s one of the toughest kids I’ve ever been around. He wants the football. We try to give him a break,” Brookshire said.

The play was aided by two penalties during the drive, taking more than four and a half minutes off the clock.

An ensuing eight-play drive by the Black Hawks ended with a failed trick play on a fourth down punt formation.

The Mountaineers took over in Black Hawk territory with four minutes left in the quarter and courting disaster again, fumbled the ball on a first down play. North Buncombe recovered on their own 39 and used an offside penalty and first down to move the ball into the Mountaineers’ territory.

Hold onto your seats

The ensuing sequence early in the fourth quarter was wild.

Lunsford ended the Black Hawks’ drive with an interception and returned it to the Hawks’ 25-yard line. With North Buncombe and Tuscola committing personal foul penalties on the play, Tuscola took possession on the Black Hawks’ 22-yard line.

The weird events began with a Fox rush of 32 yards, putting the ball on the Black Hawks’ 44 yard line. North Buncombe was guilty of a personal misconduct penalty that moved the ball to the Mountaineers’ 29.

One play later, a flag was thrown for a fourth personal misconduct penalty, with the ball being placed on the four yard line. Three plays later, Penland hit Jesse Delcambre for a seven-yard touchdown pass. A little over five minutes saw the Black Hawks’ defense commit some careless penalties, which the Mountaineers took advantage of.

The rest of the fourth quarter went as planned as Tuscola’s defense stifled the Black Hawks.’

“Outside of two quarters this year, you could narrow it down to 10 or 15 plays in the six games; they have played extremely well all year,” coach Brookshire said. “The run defense has been really well, we’re still getting better in the pass game, and we take some chances, putting some kids out on the island.”

Brookshire lauded some of his players’ contributions, “Both the Baker twins were all over the field and combined for 20 tackles. The D-line played well. When Greyson Jones, Hunter Murphy, Jadon Mintz and Coleman Cothern are doing their parts, it makes everybody else’s runways a lot easier. Greg Harrison and Conner Medina have been as consistent as anybody on the football team. ... Coleman Cothern does a great job, too. We had three penalties, It cost him about 75 more yards. He would have been pushing 300 yards.”