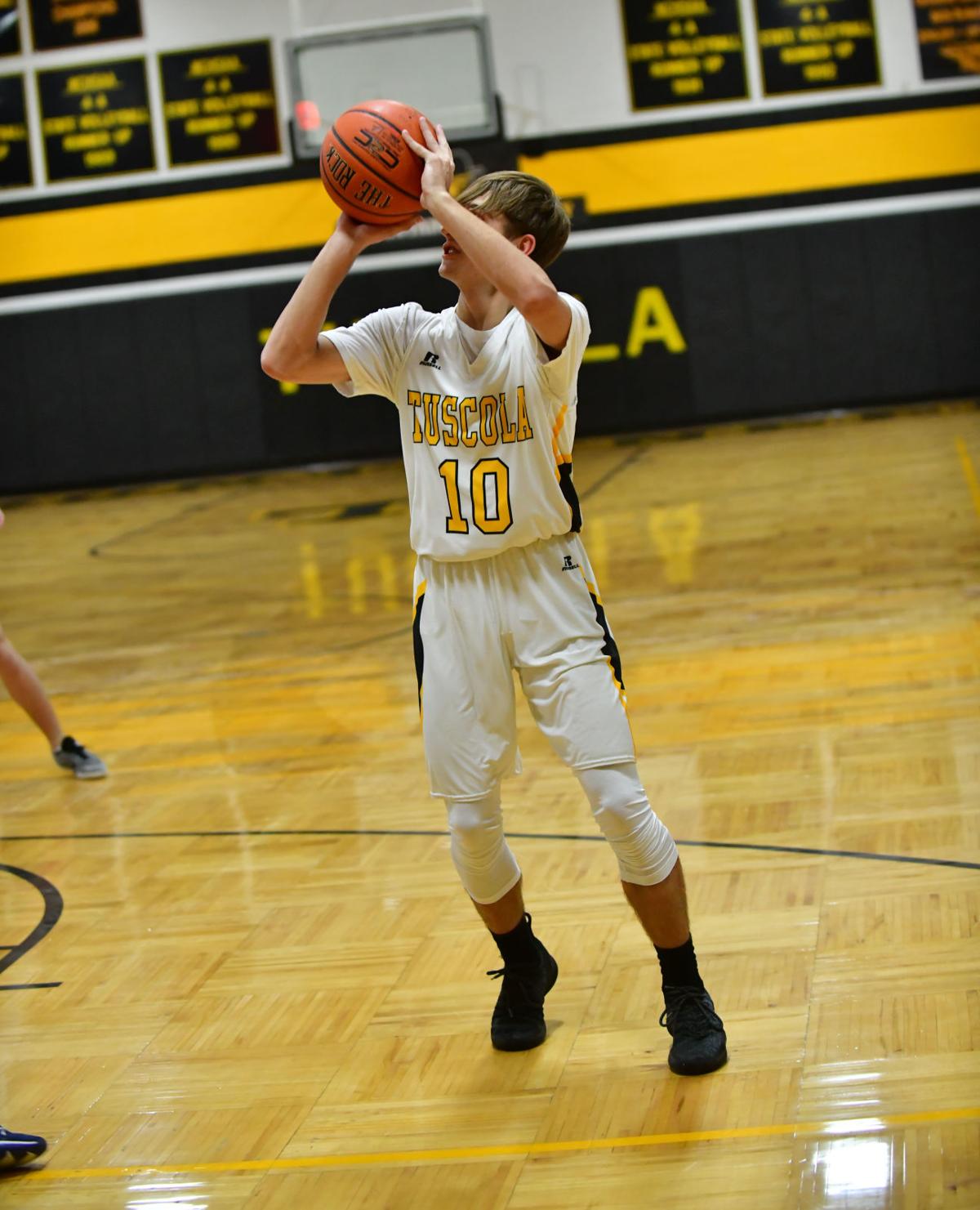 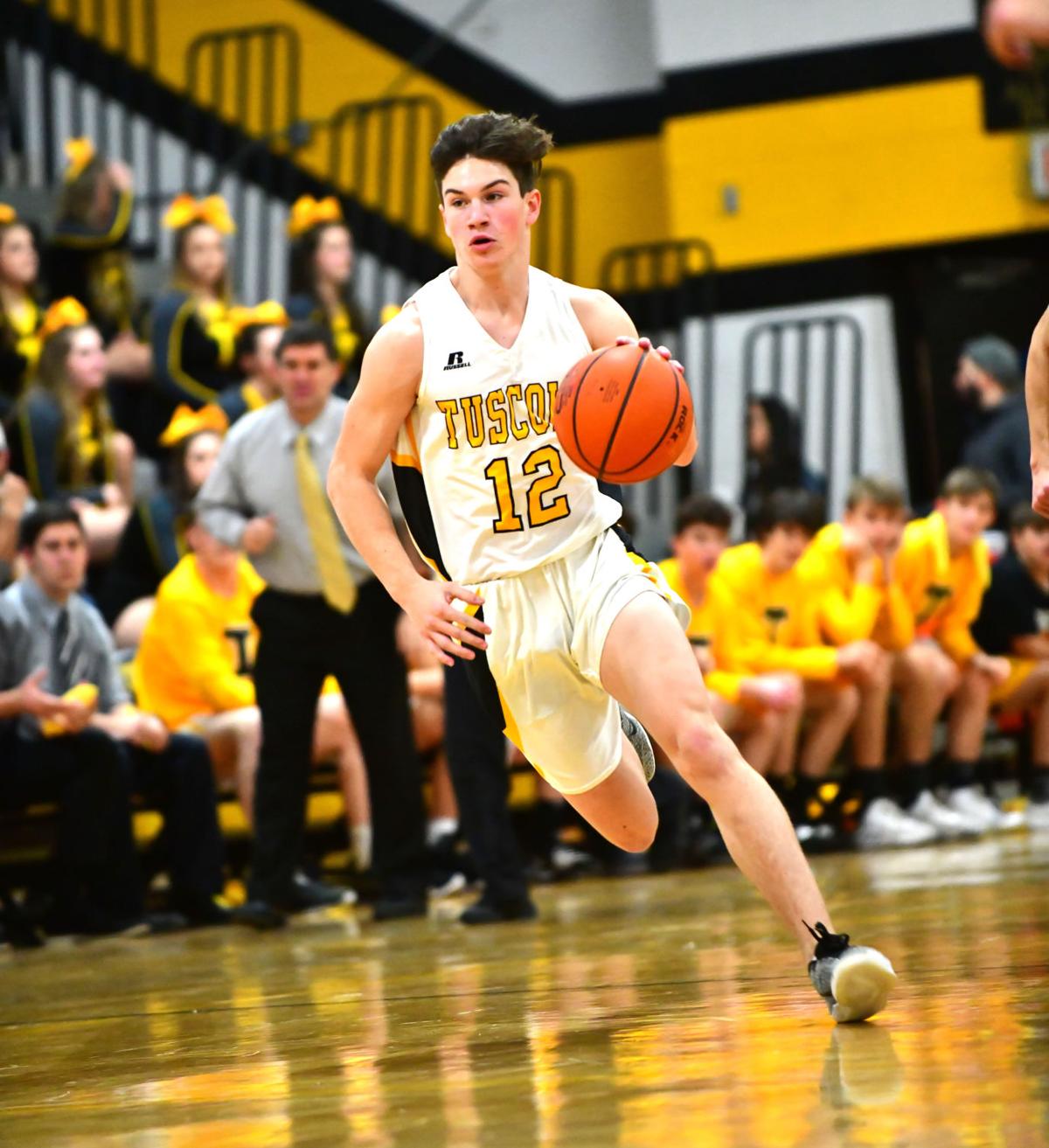 DRIBBLE — Tuscola’s Coleman Bryson dribbles up the court during a home game against T.C. Roberson. 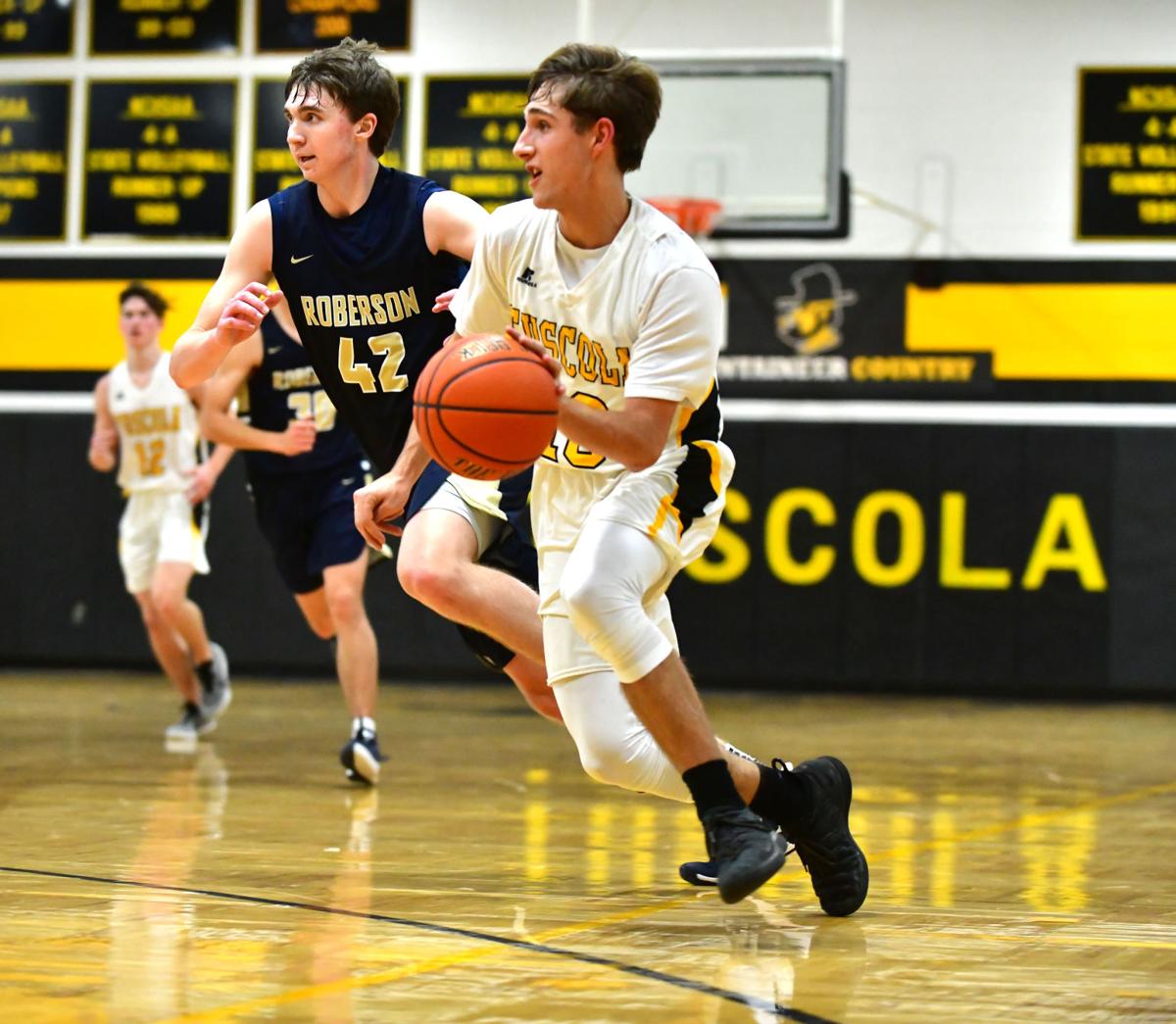 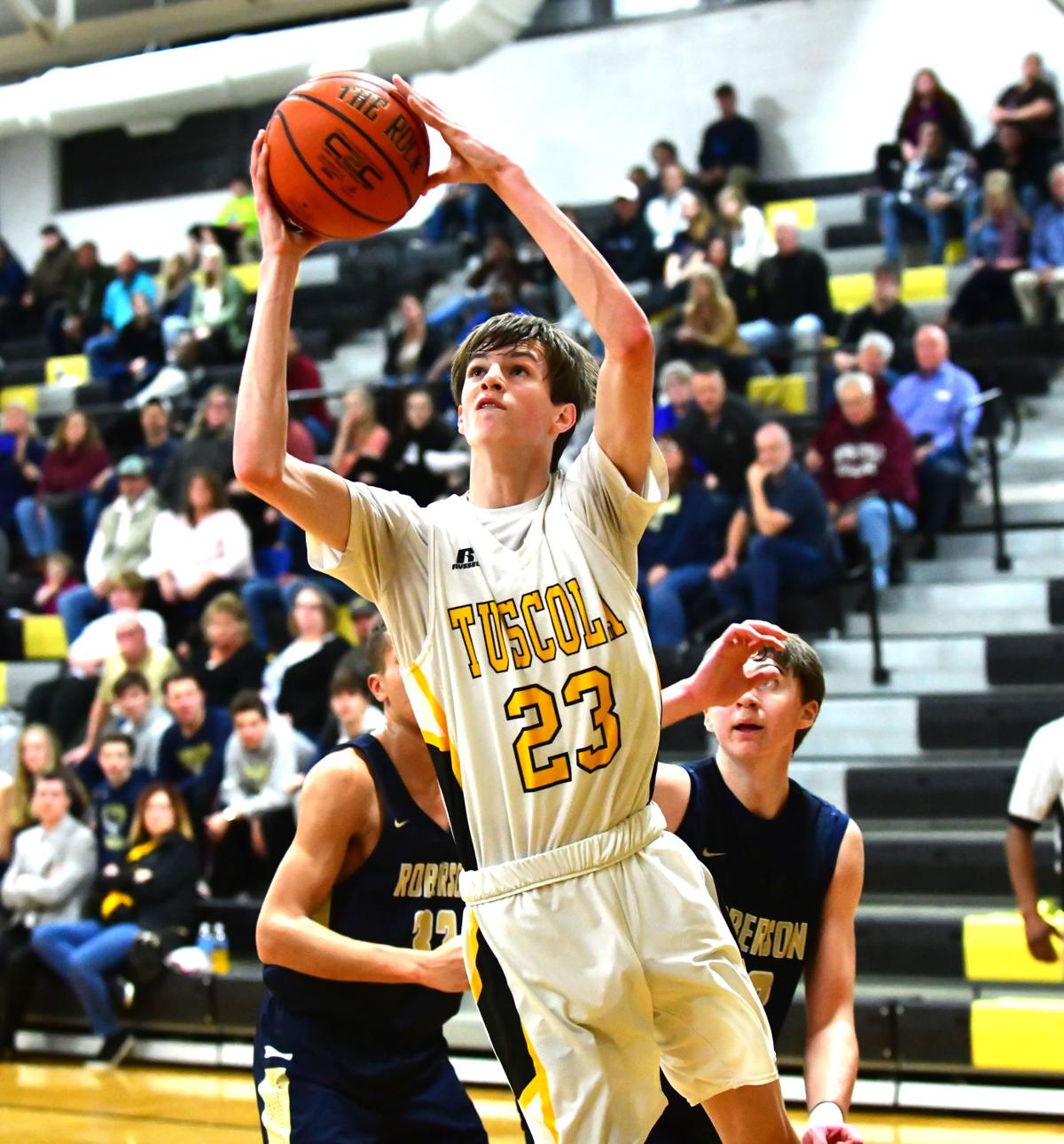 LEADER — Tuscola’s Nate Brafford puts up a shot during a home game against T.C. Roberson. 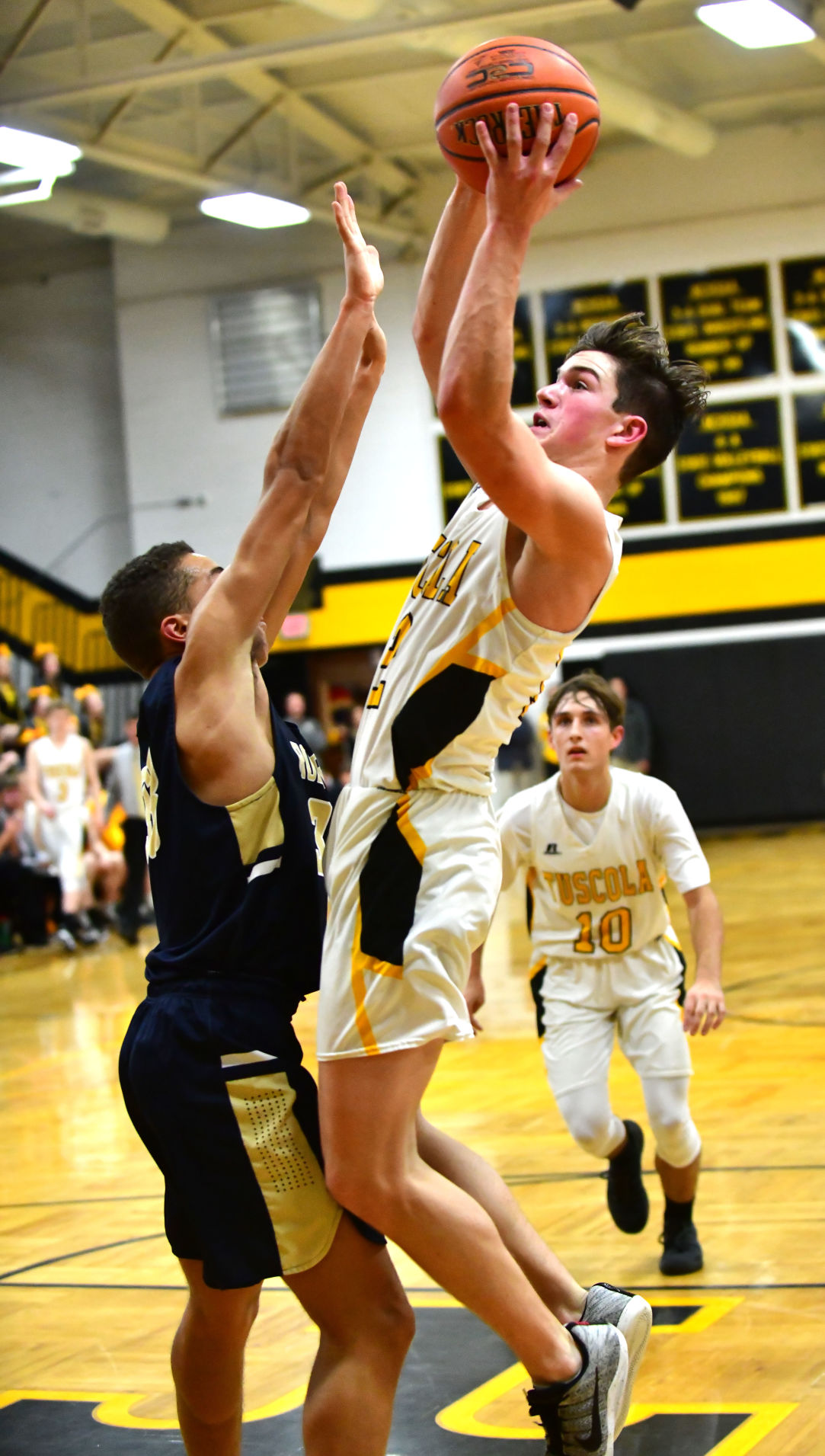 DRIBBLE — Tuscola’s Coleman Bryson dribbles up the court during a home game against T.C. Roberson.

LEADER — Tuscola’s Nate Brafford puts up a shot during a home game against T.C. Roberson.

Tuscola boys basketball once again fought back in the fourth quarter, and Nate Brafford once again led the way with an eye-popping total, but the Mountaineers could not quite get over the hump in a 79-76 loss to T.C. Roberson.

Brafford led the Mountaineers with 38 points, followed by Coleman Bryson with 15 and Trent Turner with 13. The Rams took a nine-point lead into the fourth quarter, but Tuscola fought all the way back and had a chance to tie it at the buzzer.

“T.C. is an extremely well-coached and very, very athletic team,” said Tuscola head coach Nathan Messer. “Us having three games this week, and similar games, it takes a toll on us, but our kids still gave us a shot at the end to tie the ball game. That’s what it’s going to be with us the whole year. That’s how we’re going to have to play.”

Brafford’s fourth quarter resembled the one from the night before, as he hit four 3-pointers, the fourth of which brought Tuscola with one at 59-58 with 4:08 to play. The Rams pulled back in front by six by picking up the next five points of the quarter, including a three-point play. After T.C. pushed its lead to seven with a free throw, Trent Turner hit a triple with 3:01 left to play to bring the game within four at 65-61. Brafford grabbed a steal off the in-bounds pass and layed it in to again bring Tuscola within two.

With under two minutes to play, Tuscola found itself down by five and in need of a big finish. Bryson obliged quickly, grabbing four straight points to bring his team within one at 71-70 with 1:34 to play.

“They got a lot of experience last year,” Messer said. “That’s why they’re making the plays in the close games for us. They’re making plays on the court that you don’t even see. They’re talking to the kids and helping them adjust. I think that’s a big asset for us.”

The Rams pushed their lead back to three, but a T.C. Roberson turnover following a missed Mountaineers shot gave Tuscola the ball back down by three with under a minute left. The Mounties turned it over, however; and the Rams hit their free throws off the ensuing foul to go up by five with 44.4 seconds left.

A lay-up from Brafford with 38.5 seconds left brought Tuscola back within three, as did free throws by Turner with 20.3 seconds left. The Rams then turned it over with 18.7 seconds to go, giving Tuscola a shot at a potential game-tying play. The Rams intercepted the in-bounds pass, however, and pushed their lead back five with a fast-break with about 10 seconds left.

Turner hit two more free throws with 8.8 seconds left to bring it within 3, and Brafford came up with a late steal, but his attempt at a buzzer-beating 3 was just wide.

The Mountaineers also trailed by nine in the second quarter, but ended the first half with a 14-7 run to get within one.

The Mountaineers immediately took their first lead since early in the first quarter to start the third quarter, courtesy of a 3 by Brafford. The first few minutes of the quarter provided intense, back-and-forth basketball as both teams alternated taking one-point leads.

The Rams, however; capitalized on a trio of Tuscola turnovers to push their lead to seven at 40-33. T.C. Roberson stretched its lead to 42-33 with what turned into a 9-0 run. The back-and-forth nature of the game continued from there, as Tuscola hit back with six unanswered to get back within one possession at 42-39.

“We did have poor shooting at the very beginning of the game,” Messer said. “But the guys kept playing hard and kept doing the little things. They just kept us in the ball game. That’s what we’re going to have to do.”

T.C. Roberson had the last answer in the quarter, finishing it with a 7-2 run to take a nine-point lead into the final frame and leave Tuscola in need of another of its fourth-quarter comebacks.

The Mountaineers will face Erwin on the road Tuesday.

“We just need to take care of the little things from the first quarter to the last quarter,” Messer said. “The little things matter a lot when you’re in tight ball games like we’re going to be in.”