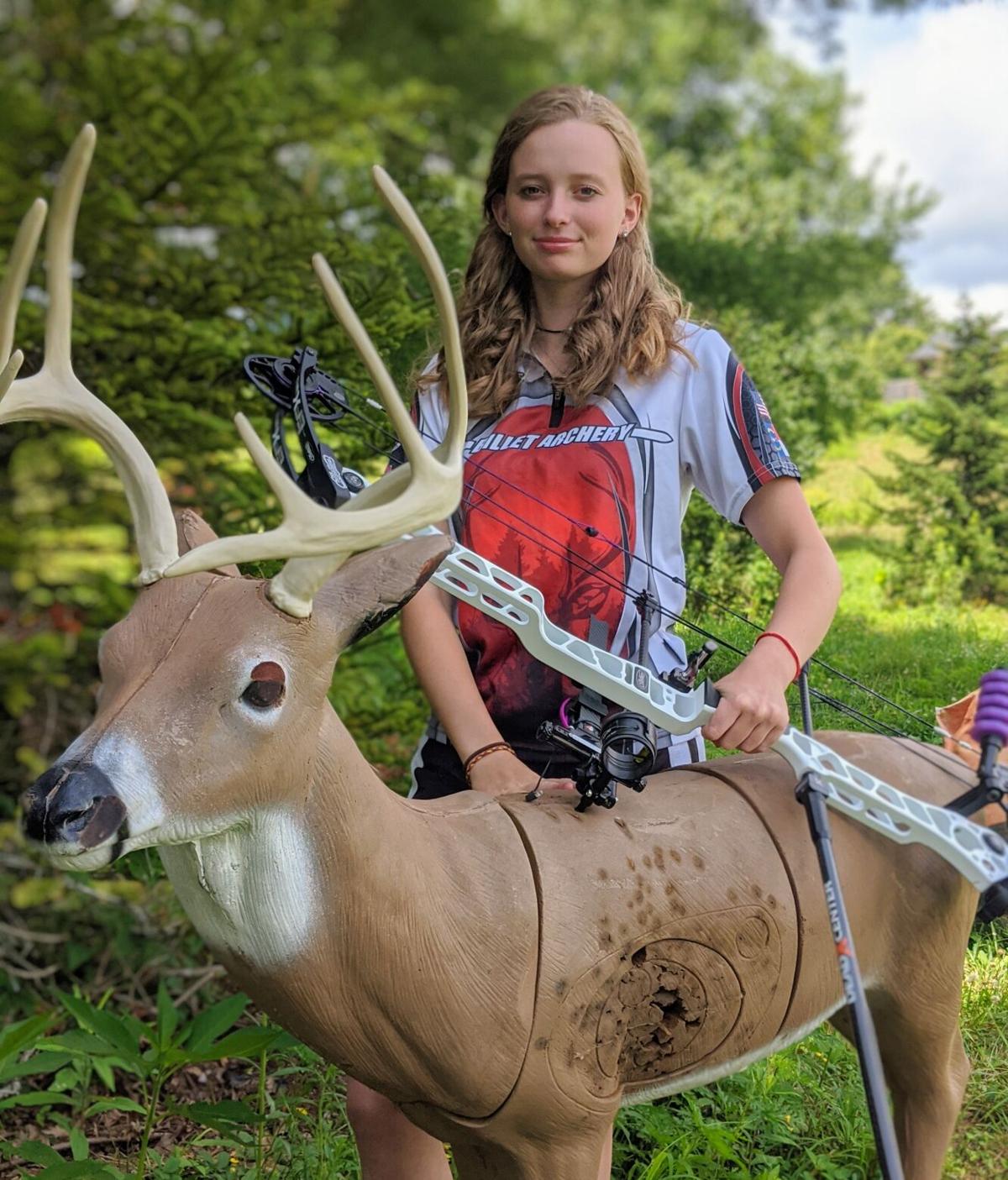 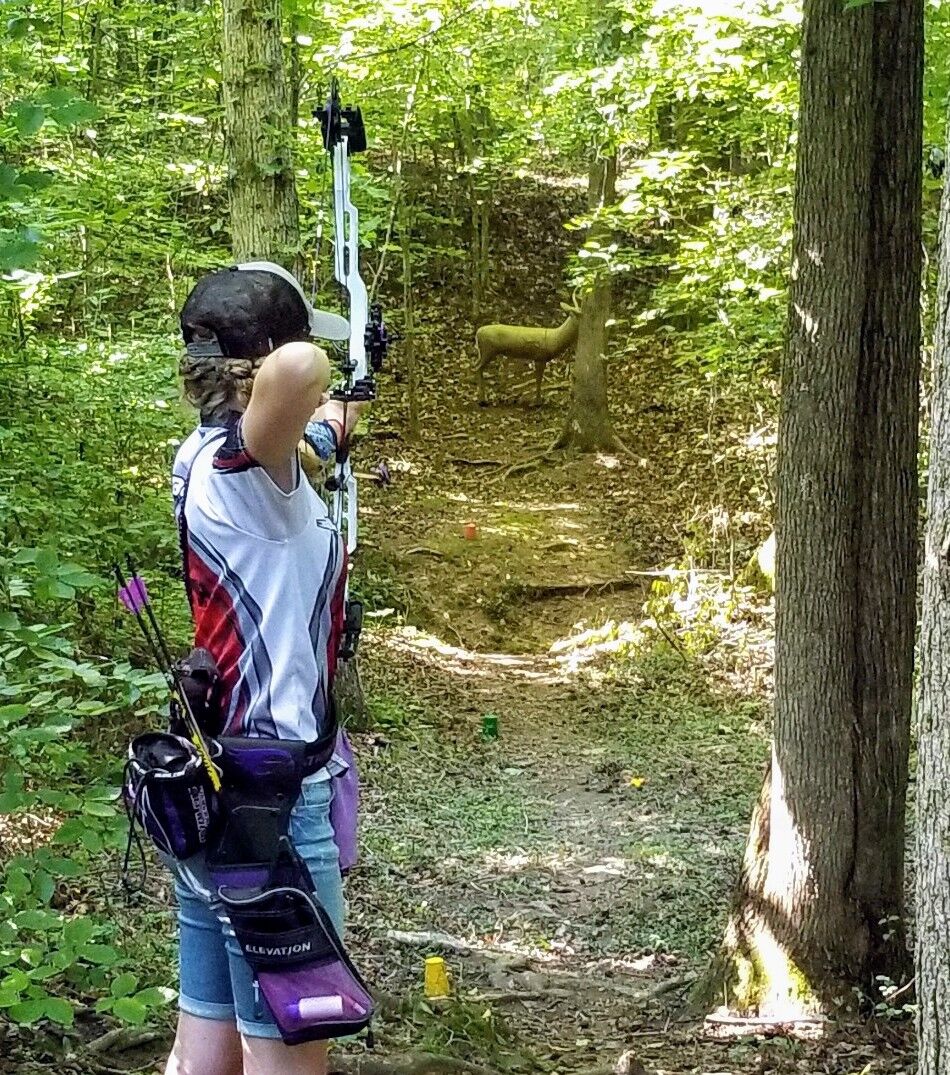 ARCHER — Alea Boyd prepares to fire an arrow at her target.

ARCHER — Alea Boyd prepares to fire an arrow at her target.

The competitive archer took home the win in the High School Girls Open of the 2020 event. Open means the competitors can use any kind of equipment on their bow.

Boyd won her event in 3D shooting, which involves shooting at foam animals marked with rings from varying distances, from different angles and elevations. Each morning she went out and shot 15 targets before turning in her scorecard. Boyd called 3D shooting her favorite part of archery.

“To be honest, I didn’t really expect to win because I had no idea how many people were in my division,” Boyd said. “Really, I just enjoy going out and shooting. I meet a lot of interesting people, especially through ASA because I don’t just meet other high schoolers, I meet adults, I meet middle schoolers, elementary school kids. It just means a lot to me that I have the ability to shoot, but also that I can go to these places and compete, and really just see how far I can push myself to become better.”

Boyd’s road to her victory started about seven years ago, when she was entering sixth grade. She decided she wanted to learn about archery and got her own bow.

“I’ve tried a lot of different sports in middle and high school, and I feel like every time I drew my bow back, I was really calm. I felt happy,” Boyd said. “It was sort of therapeutic to me because I’ve been dealing with a lot of anxiety.

Archery has gotten Boyd through some of the toughest times in her life, including losing her best friend to suicide her freshman year of high school.

Boyd credits archery with making her stronger both physically and mentally.

“It was a really good coping mechanism,” Boyd said. “But it also allowed me to heal myself and become stronger emotionally, because archery is a huge mental game. It’s not just physical; it’s a huge mental game. And if you’re not in the right mental state, you’re just not going to do as well.”

Between her ASA competitions, shooting for S3da (Scholastic 3-D Archery), being involved with the sportsman’s team at Tuscola, and working with a Junior Olympic Archery Development Program, archery keeps Boyd pretty busy.

She practices for indoor archery in the fall and winter, and estimates she shoots about 50 arrows a practice with the sportsman’s team.

The regimen for the JOAD team involves a lot more than shooting. It includes lifting weights, stretching and working out. She tries to lift dumbbells every week when she has the time.

And, especially at the present, Boyd has what she needs to practice at home.

“Since it’s the summer, I have my own targets that I shoot at home in my backyard,” she said. “That’s how I practice. I do about 50 arrows a day.”

Alea’s father, Woody Boyd, did not grow up around archery. But, when his daughter expressed interest, and got her first bow for Christmas in middle school, he was drawn to the sport as well.

“I honestly didn’t know that much about archery when we first started but I’ve also really gotten into it,” he said. “I also have a bow and shoot competition with her as often as I can.”

While Alea Boyd has her coaches and instructors on her various teams and competition levels, she also gets plenty of instruction and help from her dad.

“He’s kind of like my personal coach,” she said. “He’s with me all the time, because he’s my dad. When we’re doing small maintenance at home, he helps me correct my bow, correct my form.”

Getting to spend that time for her father has been another plus of getting into archery. Plus, when she and her father travel to compete in events in other states such as Alabama, Georgia or Kentucky, they go as a whole family.

Her mother, Gina and brothers, Alex (12) and Adam (7) support her archery as well, and the competition trips provide for quality family time. Adam has started archery as well; Alea and Woody coach him.

It’s special for any parent to watch their child find their passion. But for Woody Boyd, getting to spend time with his daughter through archery and see her success up close has been a unique experience.

“It’s great anytime a young person finds something that they’re interested in,” Woody Boyd said. “But getting to do this with her is really special. Seeing her advance and continue to progress, learning more about archery and doing better at each event makes me really proud.”

This weekend, the Boyd family will head to Cullman, Alabama, for the Elite Black Eagle ProAm, a convention of sorts that will serve as a meetup for archers of varying skill levels, from amateurs to pros such as Levi Morgan. It will also feature vendors who sell archery equipment.

The event was moved to Cullman because of COVID-19, which continues to leave its mark on the sporting world. Archery is no different, but has been less affected than a lot of leagues.

There were no qualifiers for the North Carolina ASA State Championships, because so many events were cancelled by the virus. There are safety precautions such as temperature checks going into events, spacing people out on ranges and making sure everyone wears masks when inside or off the range.

Still, archery has been able to continue with many events, and provide a sense of normalcy for its competitors.

As Alea Boyd heads into her senior year at Tuscola, she’s looking to earn a college scholarship through the S3da program. She’d like to go to NC State, where both of her parents graduated college (Alea was born in Raleigh), and shoot for the Wolfpack’s archery team.

One thing’s certain going into the future: Archery is an important part of Alea Boyd’s life, and will continue to be.

“Archery is something that I take great pride in,” she said. “I think that anyone can shoot and I think that anyone should shoot because it’s a really good sport for people who don’t really want to do contact sports or anything. It’s calming; it’s therapeutic, but it’s also very heavily demanding when you’re competing. But it also can be very enjoyable once you break through that nervousness and you break through that barrier of ‘Hey, I’m probably not that good,’ to, ‘Hey, I am good, I am doing this and I’m really enjoying it.’”