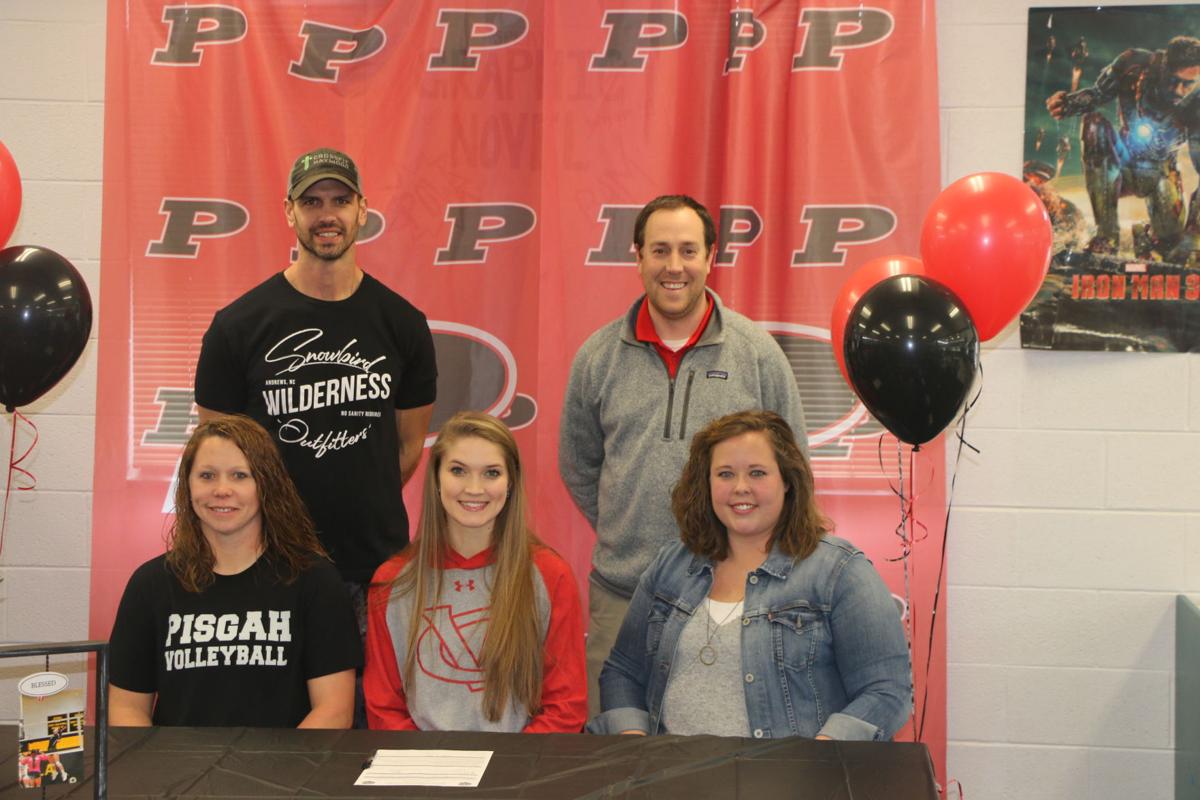 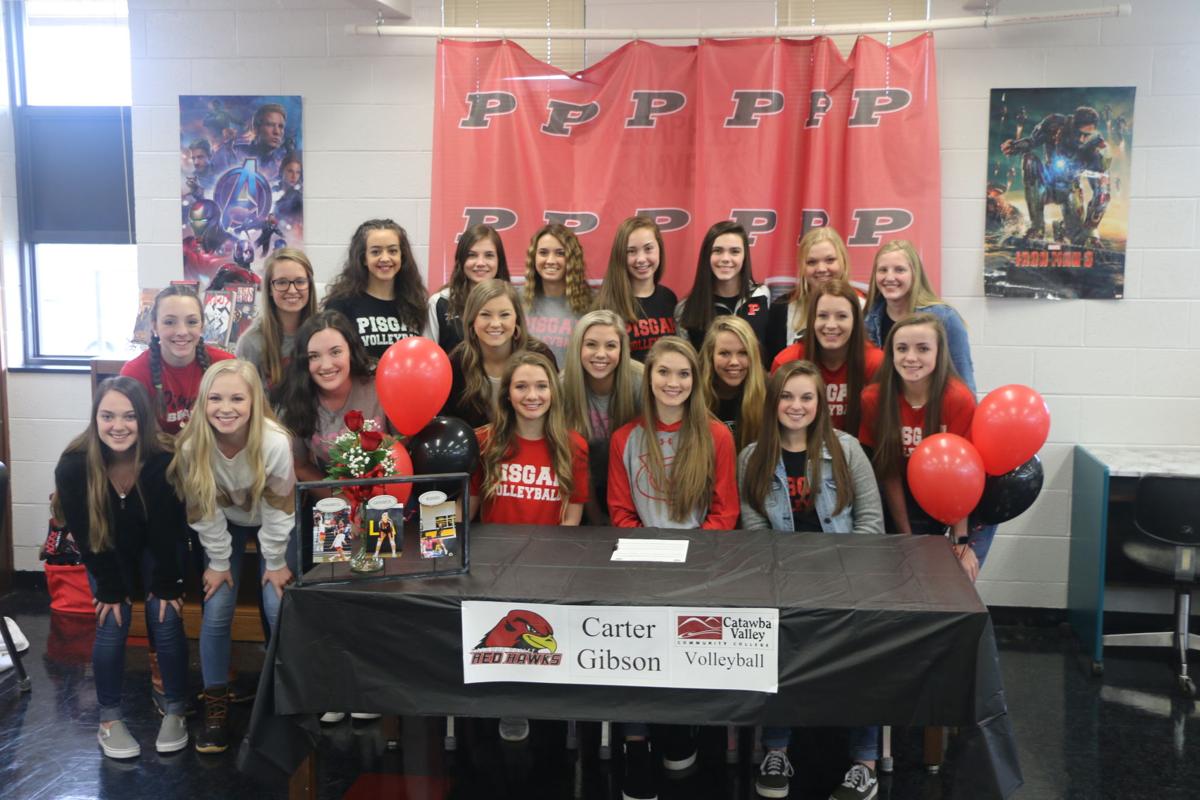 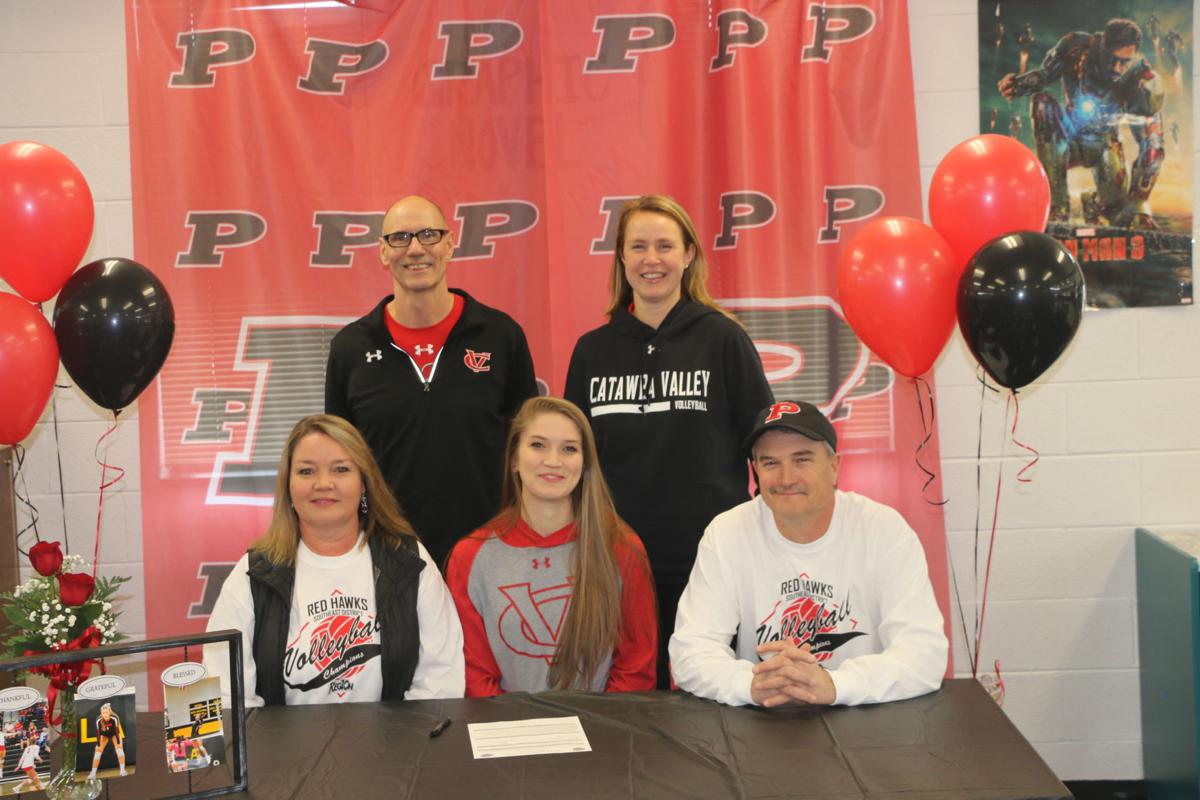 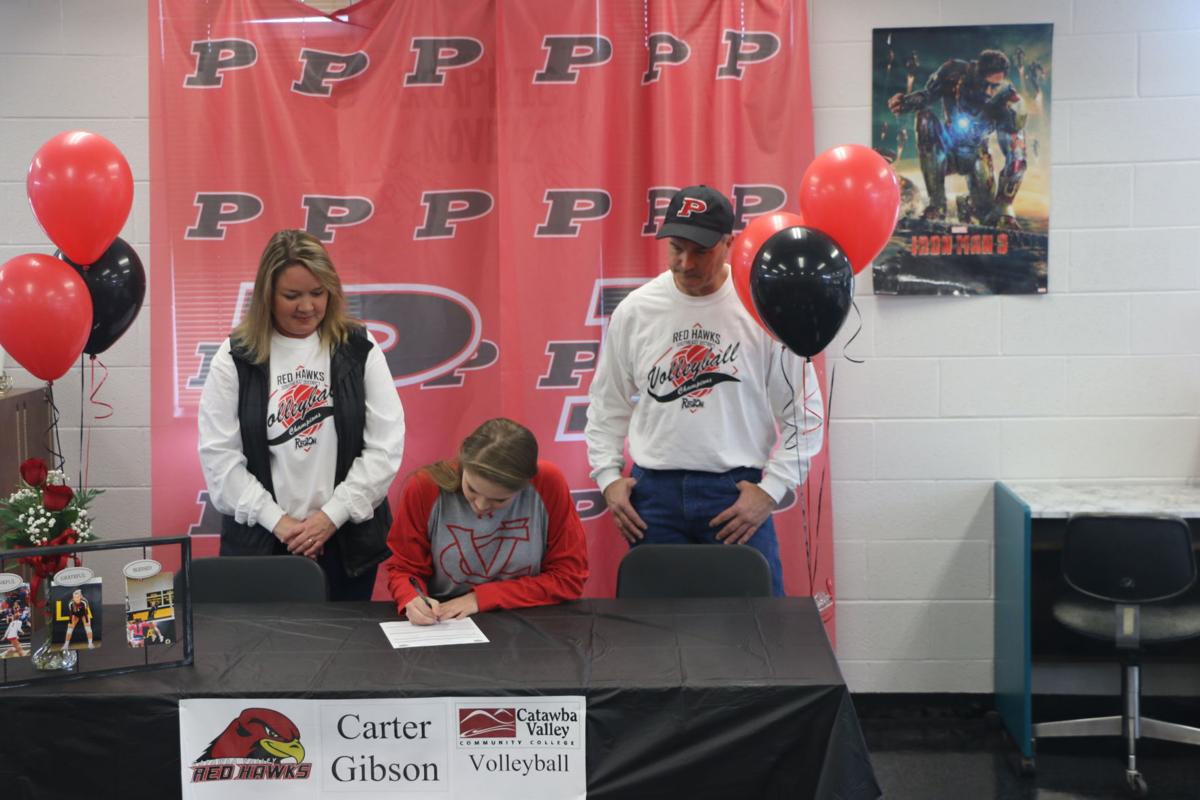 Thursday afternoon in Pisgah’s library, that dream was realized, as Gibson signed her national letter of intent to play at Catawba Valley in front of her college and high school coaches, teammates, family and friends.

“I’m so excited,” Gibson said. “It’s literally a dream come true. As soon as I started playing volleyball in middle school, whenever it was available to me, I knew that this was going to be the sport that I loved and that I would want to pursue for the next two, four, however many years that I get to play.”

Gibson pummeling a volleyball over the net and into the floor became a more than familiar sight for Bears fans during her career, as she racked up 932 kills as a varsity player, according to MaxPreps.

What will stick in Simmons’ memory, however; is not her numbers or production.

“What I’ll always remember, on the floor, was just how hard Carter played,” Simmons said in his address to the crowd. “It’ll never be a kill that stands out in my mind, it’ll be the loose balls that she dug out of bleachers or behind other teams’ benches, diving into walls. That’s how Carter practiced every day and that’s how Carter played. I know the coaches here will enjoy that at Catawba Valley.”

That combination of work ethic and skill that Gibson displayed, combined with the fact that she’s a two-sport athlete (Gibson also plays on the Bears’ girls basketball team), that drew the Red Hawks’ coaching staff to her.

“She’s just a really athletic player and I know here she’s played multiple sports,” said Catawba Valley head coach Shannon Hudson. “We appreciate that at Catawba Valley, knowing that she has those different skill sets and ability to do multiple things. She’s strong, she’s quick and she has a powerful swing. She’s all of the things that we’re looking for in an outside hitter. She’s the complete package.”

In addition to her abilities on the court, Simmons pointed out that Gibson continued to develop leadership abilities that should serve her well playing at the college level.

The development of that leadership ability didn’t go unnoticed by Catawba Valley’s coaches, either.

“Off the court, her coach and I were just talking about her leadership and how she’s really developed in that area,” Hudson said. “You can see those things watching her and how her teammates trust her. We do look for more than just what are they doing on the court but how are they interacting with their teammates, are they respectful to their coaches? Do they seem respective to the input the coach is giving? So all of those things are great qualities that she possesses. I think it’s going to be a great fit for her at Catawba Valley.”

Any potential college recruit wants to go to a school that goes above and beyond to make them feel wanted.

For Gibson, that was what the Catawba Valley coaches did during the recruiting process, leaving her without a difficult decision.

“[It was] the fact that their coaches came to me personally, emailed me, got me to Catawba and let me practice with the team some, showed me around and just how welcoming they were towards me,” Gibson said. “Their program is incredible, they’re one of the top junior colleges in the nation. They’re awesome. It was easy when they offered me.”

With the library crowded with her various coaches from her time at Pisgah, her family, her teammates and friends from the school, Gibson took a moment to reflect on what her time in the Pisgah community has meant on her journey to playing in college.

“It’s very heartwarming,” Gibson said. “Like I said during the ceremony, they all impacted my life one way or another whether it was on the basketball or the volleyball court or in the school hallway, they’ve all been great and it’s really been great to have this group of students really helping me with who I am as a person and who I am as an athlete.”

For the Pisgah program, and volleyball in Haywood County, to have a representative in the college ranks should only serve to further the game’s growth in the county.

The ability to be a role model, and representative of her school and community at the next level is something that Gibson doesn’t take lightly. She hopes to inspire young athletes in Haywood County to play the game, and give them someone to look up to.

“That’s what I hope for,” Gibson said. “I hope they look at me and say ‘I just want to be like her when I grow up.’ I know I’ve looked at players in the past like that, like Brooklyn Allen and my sister was one of them. It’s very good to be able to carry on my school to the next level and to hopefully make them proud as I continue my journey. I know that they’ll be standing behind me, they’ll be supporting me and it’s just going to be a great experience.”