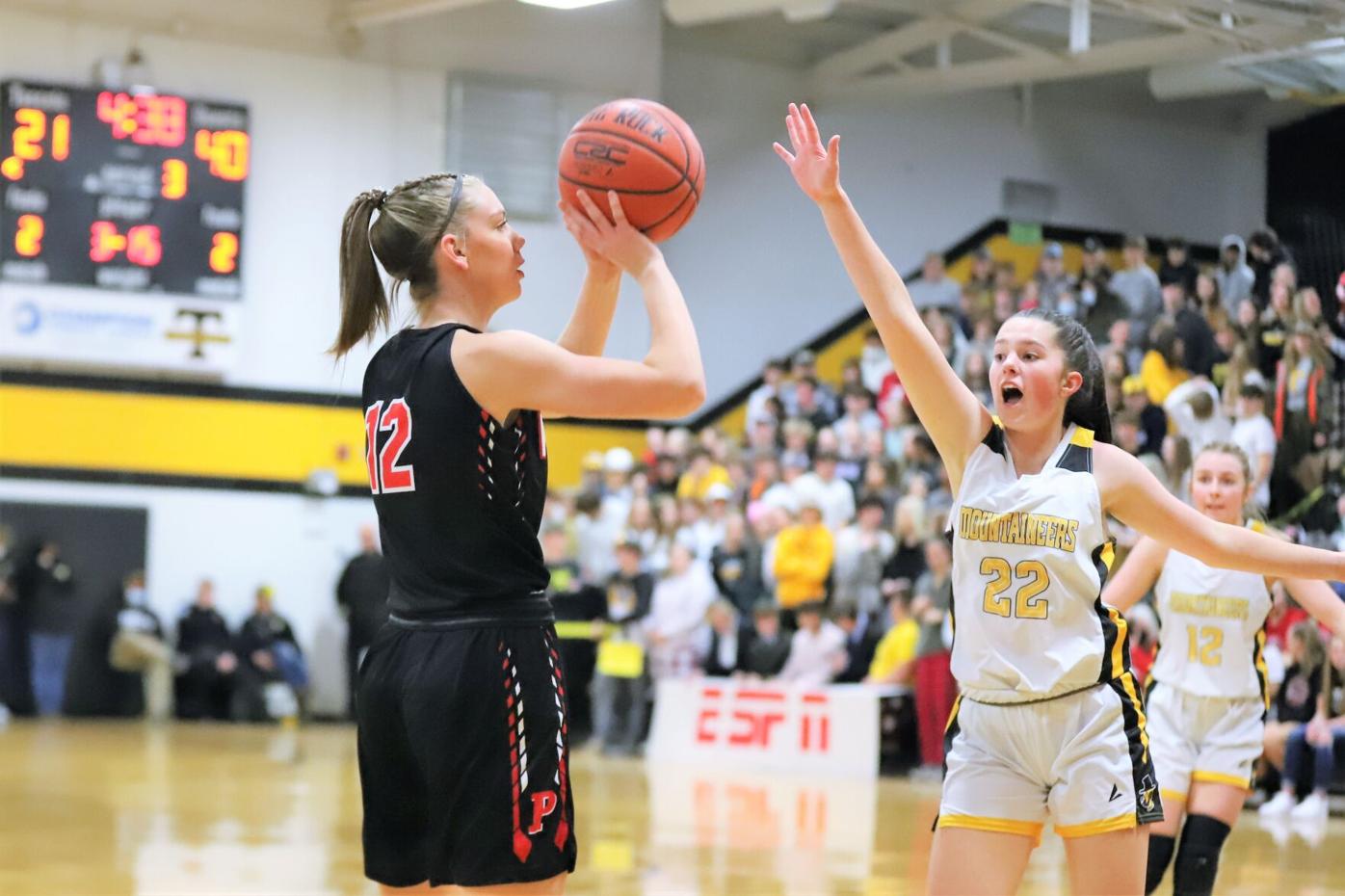 CONTESTED — Pisgah senior Ashtyn Frady looks to shoot over Tuscola freshman Cecilia Morgan’s outstretched arm during the Bears’ win on Friday in Waynesville. Frady scored 8 points in the game while Morgan finished with 2. 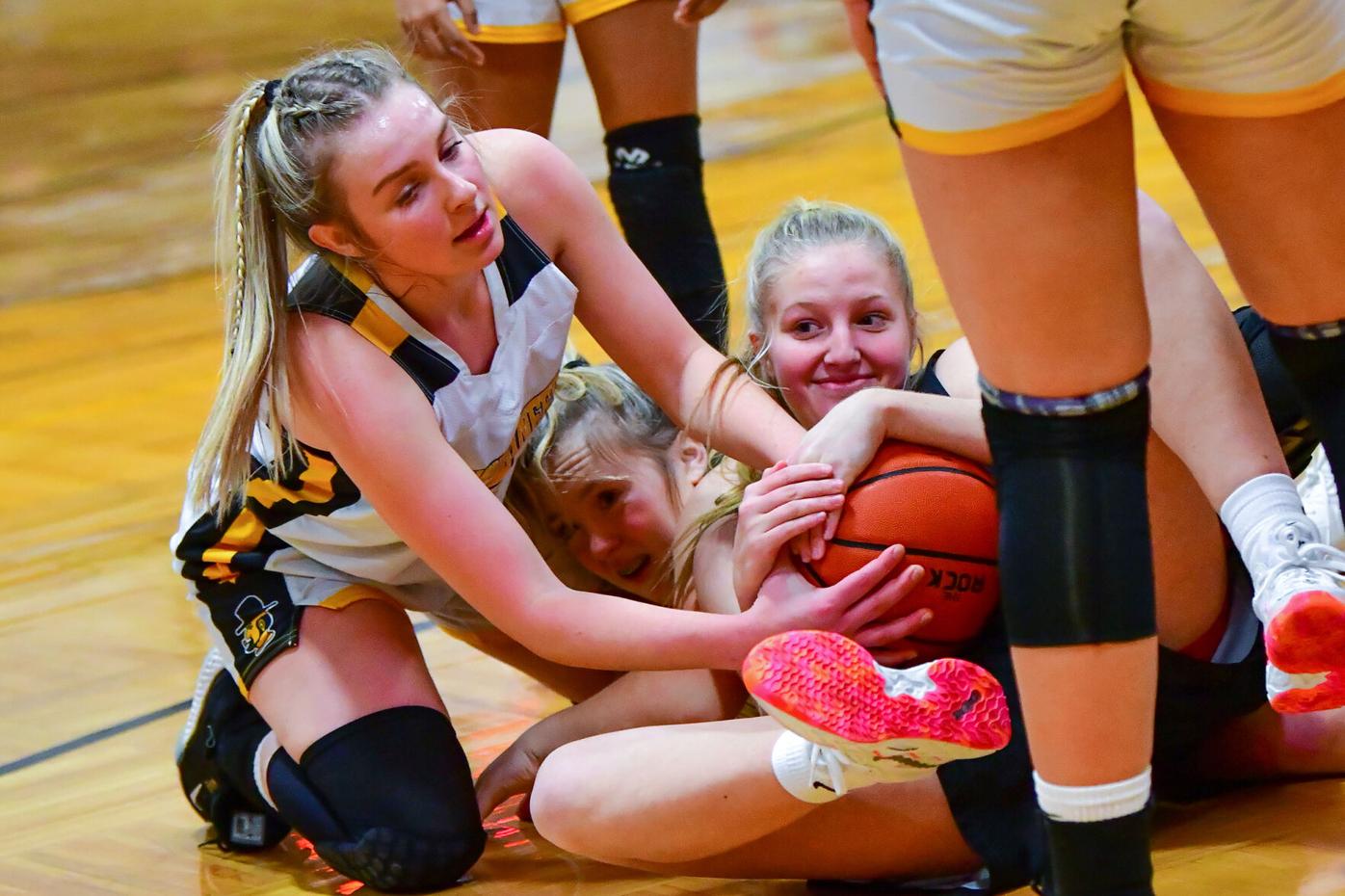 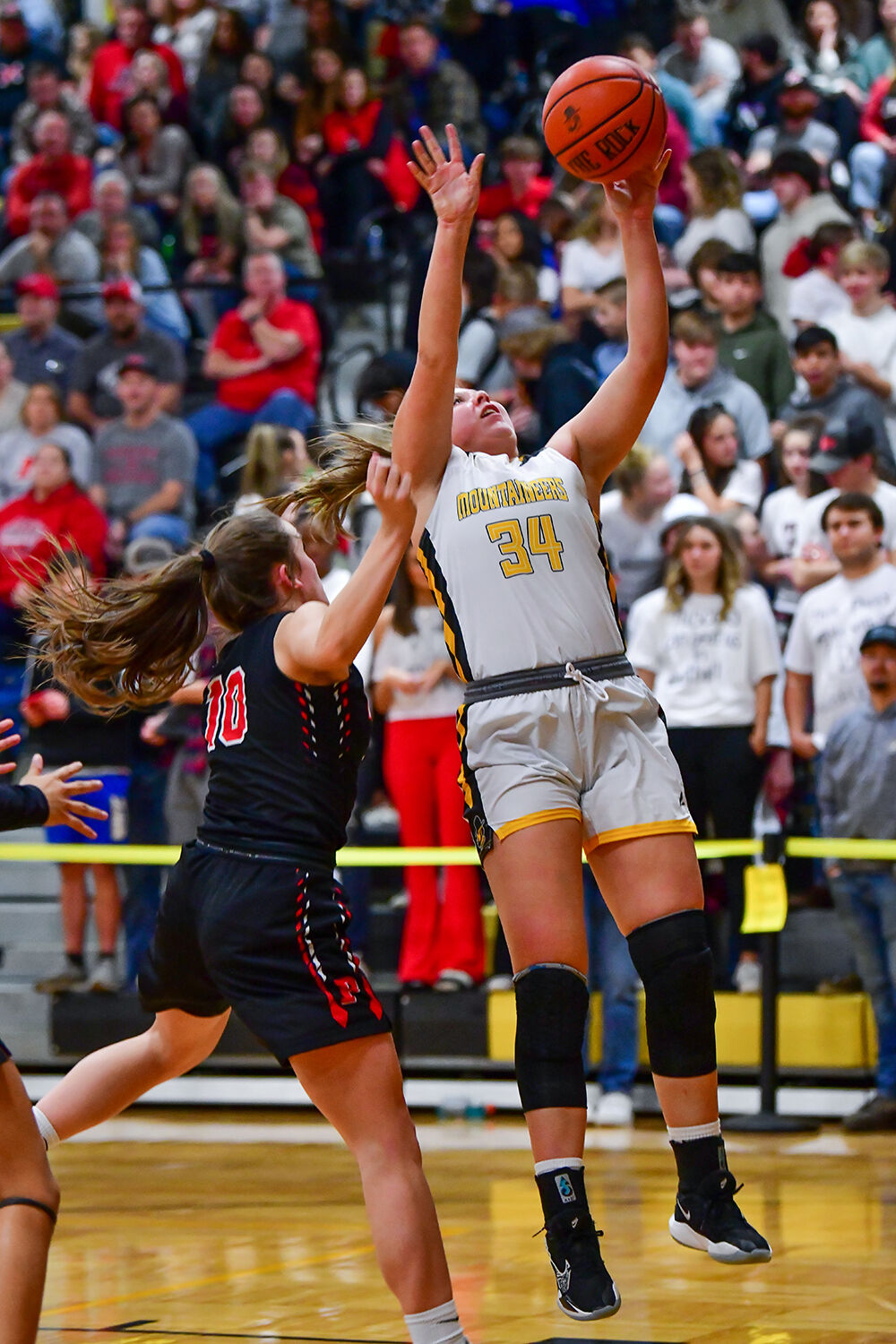 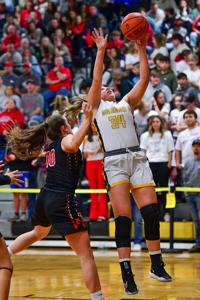 FOR TWO — Tuscola senior forward Delany Buchanan goes up for a deuce against Pisgah on Friday. Buchanan led the Mounties with 12 points in the loss.

CONTESTED — Pisgah senior Ashtyn Frady looks to shoot over Tuscola freshman Cecilia Morgan’s outstretched arm during the Bears’ win on Friday in Waynesville. Frady scored 8 points in the game while Morgan finished with 2.

FOR TWO — Tuscola senior forward Delany Buchanan goes up for a deuce against Pisgah on Friday. Buchanan led the Mounties with 12 points in the loss.

Pisgah’s girls basketball team opened Friday night’s Haywood County rivalry matchup against Tuscola on a run, seized a 23-3 lead by the end of the first quarter, and went on to win 74-33.

“I think we were very focused. With a rivalry game like this, records kind of go out the window and we knew we’d get Tuscola’s best shot,” Pisgah Head Coach Brandon Holloway said. “I was really pleased with the way we started that first quarter and kind of set the pace and the tone.”

A big key to Pisgah’s success was its depth and teamwork, being able to stay fresh and share the load offensively.

“It’s always so good to beat Tuscola,” Pisgah junior forward Maddie Rhea said. “Today, we had a devotion before the game and it talked about how we need to work better as a team and not be individual players.”

The devotion apparently got the message across. All 13 Bears entered the game and scored at least one point. Nine Bears scored four or more points, six scored seven or more and two reached double-figures. Rhea finished with eight, including five in the first quarter.

“When we came out and went ahead early, it was just so much fun,” Rhea said. “We enjoyed it and just had fun the rest of the game.”

In the first quarter, the Bears’ press forced the Mountaineers into several early turnovers that Pisgah translated into points on the other end.

“The girls did a really good job with the rotations and created a lot of turnovers in the backcourt and allowed us to get some good transition points,” Holloway said.

Pisgah’s press has been lethal at times throughout the season and Holloway credits a large part of that success to the depth of his roster.

“The ones in, they know they’re going to come out in three or four minutes, so they’re able to go with a little more intensity than they would if they were kind of pacing themselves. The depth has helped our intensity rise up here lately,” Holloway said.

After struggling with the press in the first, Tuscola settled down in the second quarter and picked up some momentum, outscoring Pisgah 12-8 before Bears’ sophomore point guard Dot Mills nailed a deep three at the buzzer.

“In the second quarter, they did a much better job of handling the press,” Holloway said. “We tried some different rotations and lineups and we had a hard time getting the flow going. We went a stretch there without scoring and Tuscola made a good run to get back in it.”

The Bears had more success with the press early in the third and fell back into a halfcourt defense midway through the period, coasting the rest of the way to the 74-33 conference road win.

The victory gives Pisgah a three-game win streak and Holloway feels good about the way his team is gaining momentum as conference play picks up.

“We preach all the time in November and December, our goal is to start peaking as we get into January. Everything we do is to prepare us for this stretch,” Holloway said. “We’ve got a couple more games in this first round of conference, so if we can come away with wins there, I think it’ll give us a huge boost of confidence going into the second half of conference.”

Pisgah looks to be in a good spot to contend for the Mountain Seven title. The Bears’ only conference loss so far came against Franklin, who fell to North Henderson. Pisgah has matchups with East and North Henderson next week before they’ll start seeing conference opponents for the second time.

North handed Franklin its only conference loss this year but also has losses to Smoky Mountain and West Henderson, teams Pisgah has already beaten.

“I think if we can keep playing as a team, we can keep doing what we’ve been doing because when we work together, nobody can beat us,” Rhea said.

Tuscola travels to Smoky Mountain on Tuesday before hosting West Henderson on Friday for 6:30 p.m. tipoff.