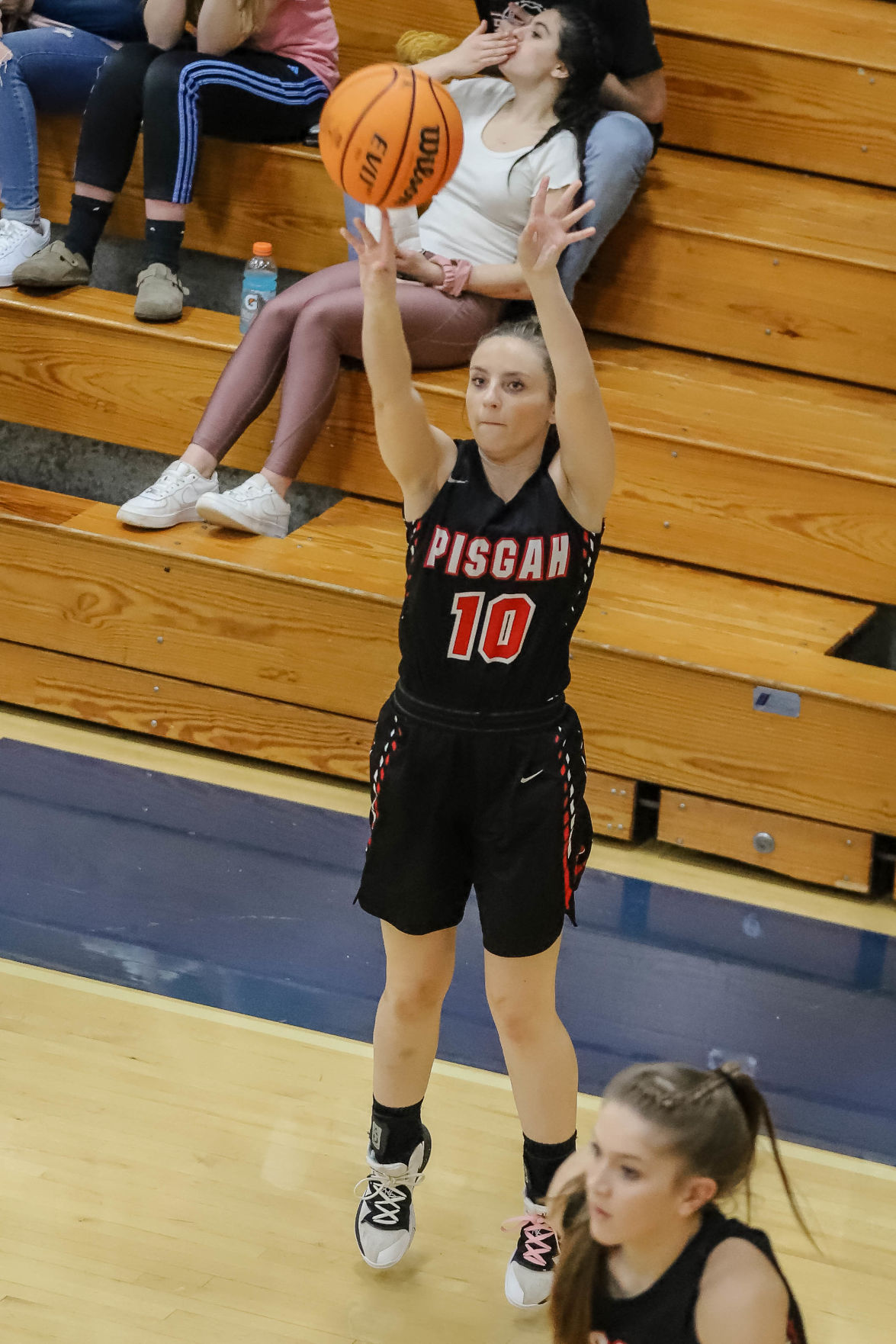 FOR THREE -- Pisgah's Cayli Parham shoots a 3-pointer against Brevard. 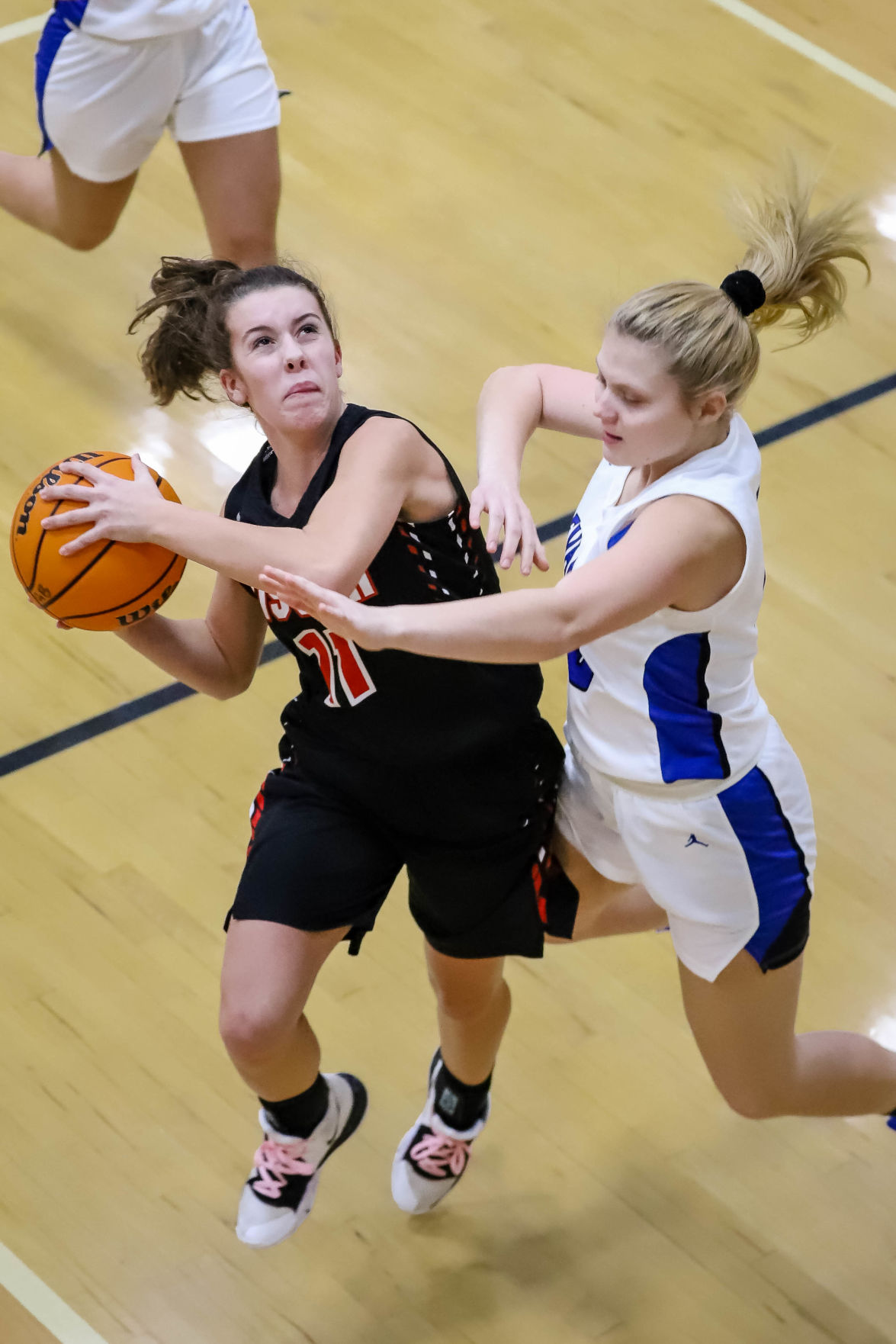 FOR THREE -- Pisgah's Cayli Parham shoots a 3-pointer against Brevard.

Senior Carter Gibson led the Bears with 14 points, followed by senior Cayli Parham with 12. With the loss, the Bears finish tied with Brevard for second in the Mountain Six. A tie-breaking procedure will be determined Wednesday.

“That’s the story of our season,” said head coach Brandon Holloway. “We’ve been fortunate. Our last four or five games have come down to the wire and we’ve been able to pull it out. Tonight, we came out on the short end of it. Brevard came extremely ready to play and I thought our girls were ready to play. It was an awesome basketball game for fans to watch, not so much fun for a coach on the other end or the players on the losing end. I hate it for our kids, I thought they worked extremely hard. They executed well out of time out situations. They put themselves in position and we just came up short tonight.”

Pisgah trailed by four points entering the fourth quarter but battled to the end in a final eight minutes that saw four lead changes.

The Bears needed less than a minute to retake the lead in the fourth, with a personal 5-0 run for Parham giving Pisgah a 47-46 lead. After Brevard recaptured a one-point edge, Gibson gave the lead right back to the Bears.

With about 3:15 left, Brevard took the lead back at 50-49 with a layup. Pisgah held strong on defense with three straight stops off turnovers, and then senior Chloe Parris drew a foul with 1:56 left and hit 1 of 2 to tie the game at 50.

The Bears grabbed the rebound of the miss, and, with 1:51 left, Gibson went to the line and hit one shot to put the Bears back in front at 51-50.

After Brevard missed a pair of free throws with a 1:40 left, Pisgah missed a 3, and then the Blue Devils hit a layup to retake a 52-51 lead with 1:16 left. The Bears turned it over on their ensuing possession, and Brevard went 1 of 2 from the free-throw line with about 50 seconds left to push its lead to 53-51.

After Holloway called a timeout with 37.1 seconds to play, Brevard came up with a stop, and Pisgah was once again forced to foul with 27.5 seconds left. The Blue Devils hit both free throws to push their lead to four at 55-51.

The Bears could not come up with points on the ensuing possession, and Brevard closed out a narrow win.

The Bears controlled this one in the early going, racing out a quick 7-1 lead. Pisgah took a 14-8 lead to the first break, aided by a late 3-pointer and layup by Gibson.

With about three minutes into the second quarter, with the Bears nursing a four-point lead, senior MaeAnna Norris swished a 3 to put the team up 20-13. After Pisgah extended its lead to nine, however; the Blue Devils ripped off a 15-4 run to take their first lead of the game at on a 3-pointer with about 10 seconds left in the half.

Sophomore Morgan Putnam hit a free throw with 3.4 seconds left in the half, sending the Bears to the locker room down 28-27.

After back-to-back buckets gave Brevard a three-point lead early in the third quarter, Norris again came up with a triple from the top of the key to tie the game.

After Pisgah brought it within one with a free throw, Brevard pushed its lead to four with a shot from beyond the arc. The teams alternated 3s, with a triple from Cayli Parham giving the Bears a one-point lead before the Blue Devils took it right back with a deep shot at the other end.

“Both teams were playing extremely well,” Holloway said. “They were able to make some free throws and make some big plays. We had some foul trouble early on in the game that hurt us. In the second quarter when they made a big come back and went up on us, I thought we did a better job of settling in and getting our matchups after that first little run. It’s constantly learning, and even though it’s the last game of the season, we’re still learning things about this team that we can continue to get better and take into the tournament.”

Brevard ended the quarter with a 6-0 run, taking a 46-42 lead into the final frame and setting up for a tight final battle.

Next up for Pisgah is the Mountain Six Conference Tournament. If the Bears win the tie break with Brevard, they will get a bye into the second round of the tournament at East Henderson high school next Tuesday. If Pisgah drops to the three seed, it will host six seed East Henderson in Canton on Friday.

“Take it one game a time,” Holloway said. “It’s a new season. We talk about our nonconference as being a season. We challenge ourself and then it prepares us for our conference. I told our girls tonight, there’s not going to be any shares of first or shares of second. It’s going to be an all out, first, second, third. Our goal, like it is every year, for the last 17 years, we’ve been fortunate enough to play in the conference tournament championship the last 10 years. That’s our goal again. We’re going to take it one game at a time, whether that’s Friday night or Tuesday night. We’ll take that one and try to move on from there.”