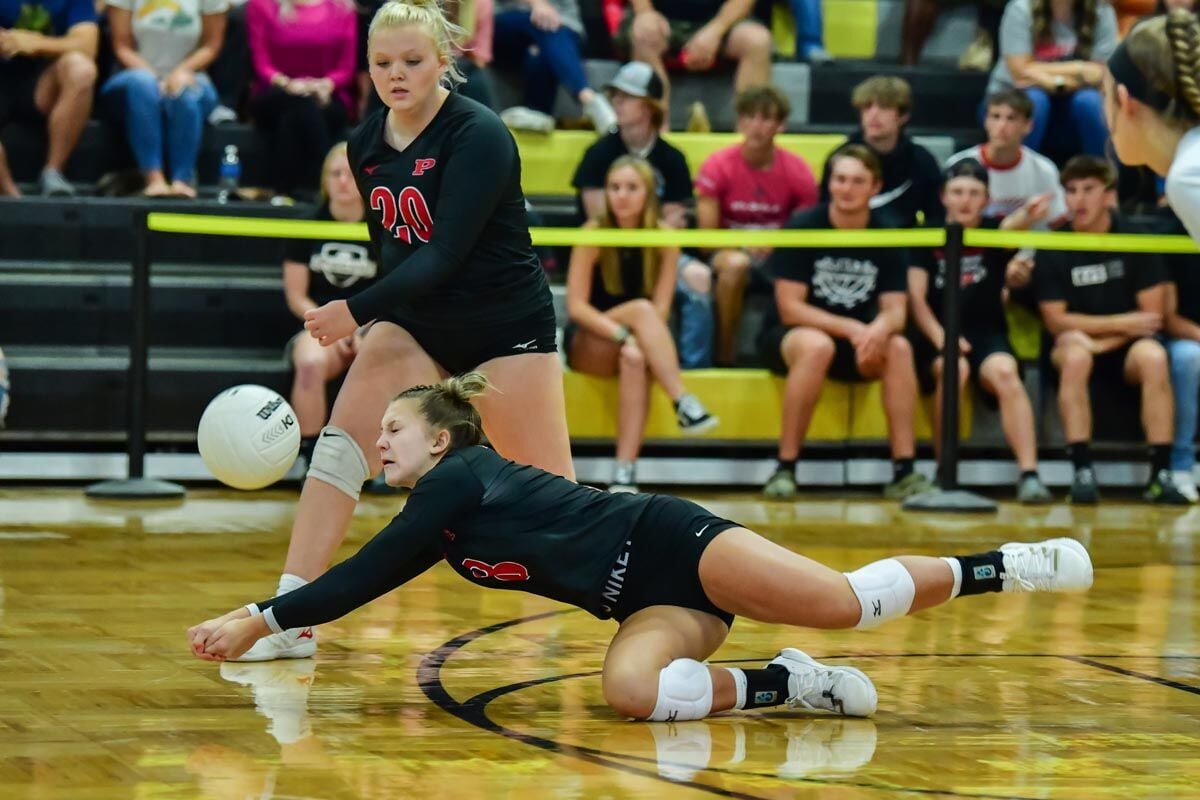 Pisgah’s Peyton Chappell dives for a crucial save during her team’s victory over Tuscola in the rivalry matchup Thursday in Waynesville. 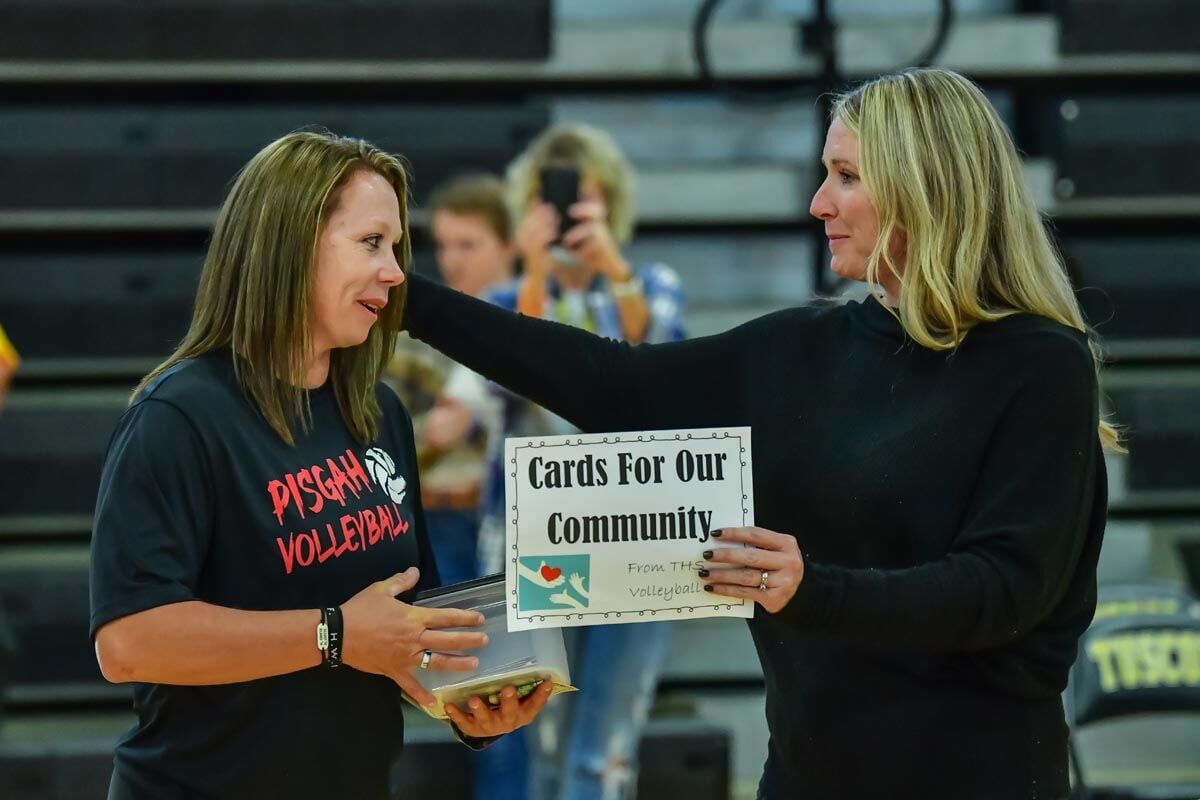 Pisgah head volleyball coach Heidi Morgan and Tuscola head coach Amanda Belue share a moment ahead of Thursday’s match for the Cards for the Community program. 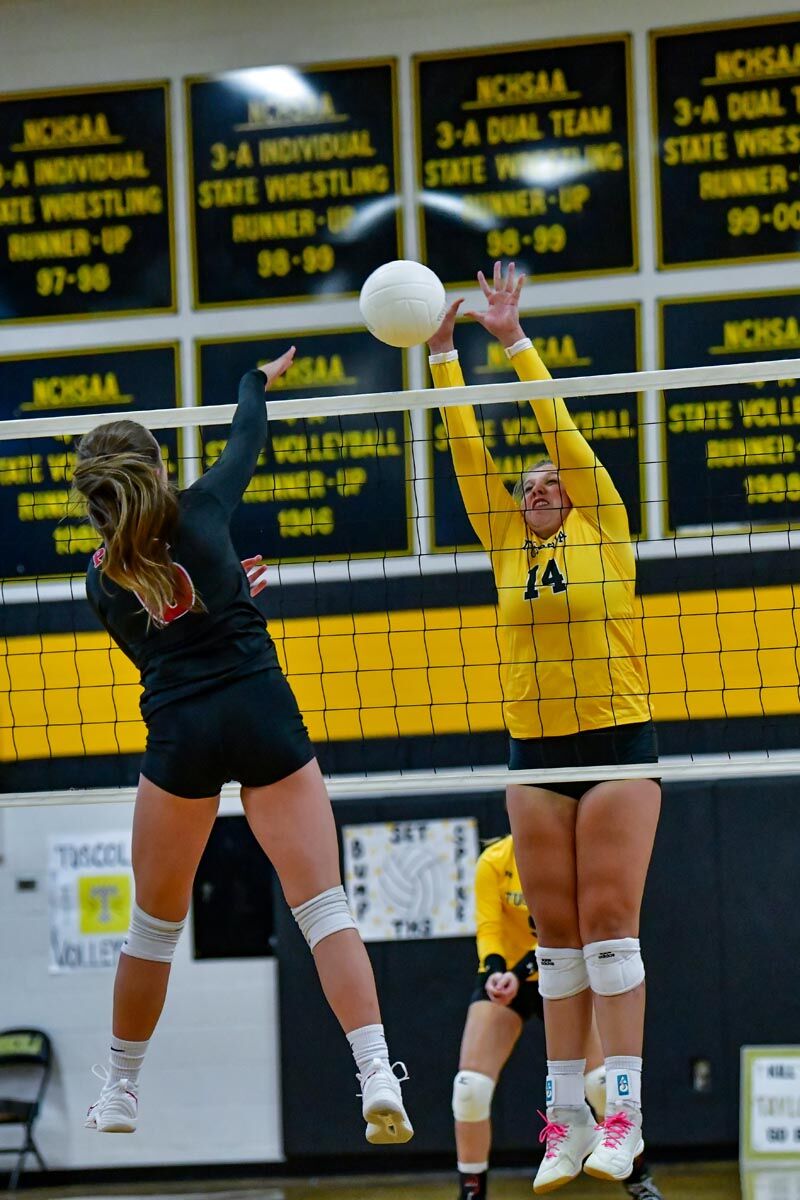 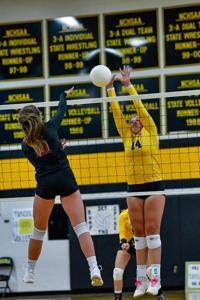 Tuscola senior Delany Buchanan goes up for a block in Thursday’s match against Pisgah.

Pisgah’s Peyton Chappell dives for a crucial save during her team’s victory over Tuscola in the rivalry matchup Thursday in Waynesville.

Pisgah head volleyball coach Heidi Morgan and Tuscola head coach Amanda Belue share a moment ahead of Thursday’s match for the Cards for the Community program.

Tuscola senior Delany Buchanan goes up for a block in Thursday’s match against Pisgah.

On Tuesday, both teams ended streaks in their seasons. Tuscola recorded their first of the season victory over the East Henderson Eagles 3-0, ending a four game losing skid.

Meanwhile, Pisgah suffered its first loss of the year to the West Henderson Falcons 3-0 on Tuesday, ending the Bears six-game winning streak to begin the year.

Visiting Pisgah entered the contest as the favorite, having accumulated an overall record of 6-1. The Mountaineers entered the game with a 1-4 record but were gaining momentum with the victory on Tuesday.

“It was very tough for sure, they came to us as hard as they could and we struggled at first,” Pisgah senior Alexis Gibson said.

The set see-sawed back and forth until the score was tied at 26. Tuscola toughed it out for a thrilling 28-26 first set victory.

“We came out a little flat, playing Tuscola is a different environment, any sport that you play,” Pisgah head coach Heidi Morgan said. “We were a little big eyed so to speak, but we were able to get it under control.”

The second set saw the Bears take a 12-11 lead, but that was the closest the Mountaineers came. An ace by Pisgah’s Ashtyn Frady gave the Bears a 14-11 lead. The Bears played strong down the stretch and won the second set 25-17.

“I think they started hitting better in the second set,” Tuscola head coach Amanda Belue said. “We did start to adjust to the hits and were getting some hands on the ball defensively.”

In the pivotal third set, the Bears power game started to show itself. With the score at 16-12, the Bears ran off seven straight for a 23-12 margin, highlighted by a service ace from junior Cayce Lovelace. The Bears closed out the set to win 25-15.

The fourth set proved more of the same as the Bears power game dominated. Tuscola couldn’t generate a rally and dropped the final set 25-10.

“We wanted to come out with a bang and start really early and get it over with, with a win and just play our hearts out,” Tuscola senior Delany Buchanan said. “We did in the first set. I think our mistakes got in our heads and we didn’t think about anybody but us.”

Pisgah was led by Laura Piva with 19 kills, Frady with 13 kills, and Emma Deaver with five kills. Frady also had two aces. Lovelace had 36 assists and four digs.

“I’m a firm believer that a big win like this takes your entire team,” Morgan said. “I had 16 girls that contributed tonight.”

“After the first set we went into the locker room and had a heart to heart and realized we were playing for something bigger than ourselves, we’re playing for our number three,” Chappell said. “It was important that we executed properly and we were able to follow through.”

Belue was optimistic about her team after the loss.

“I feel we had a really good game plan and it worked in the first game,” Belue said. “I feel they worked really hard, now it’s just getting past the mental mistakes and then moving on to find our rhythm as we continue to play.”