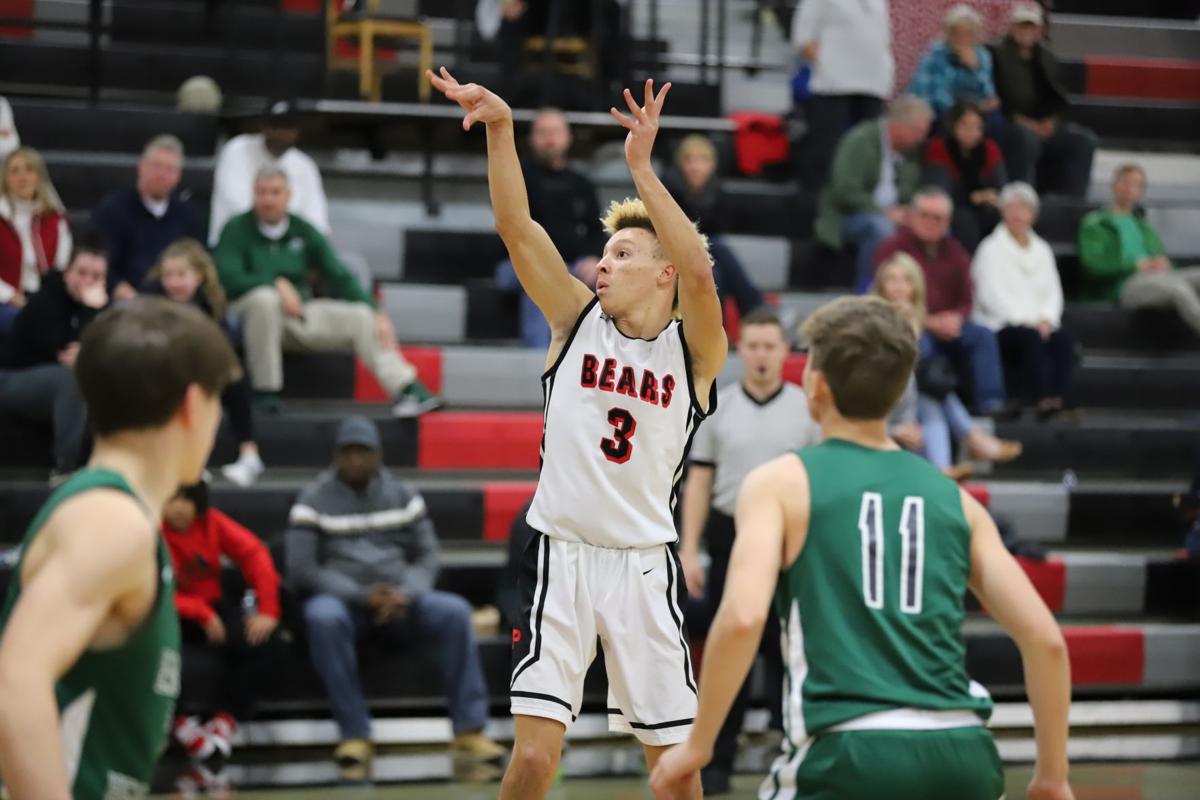 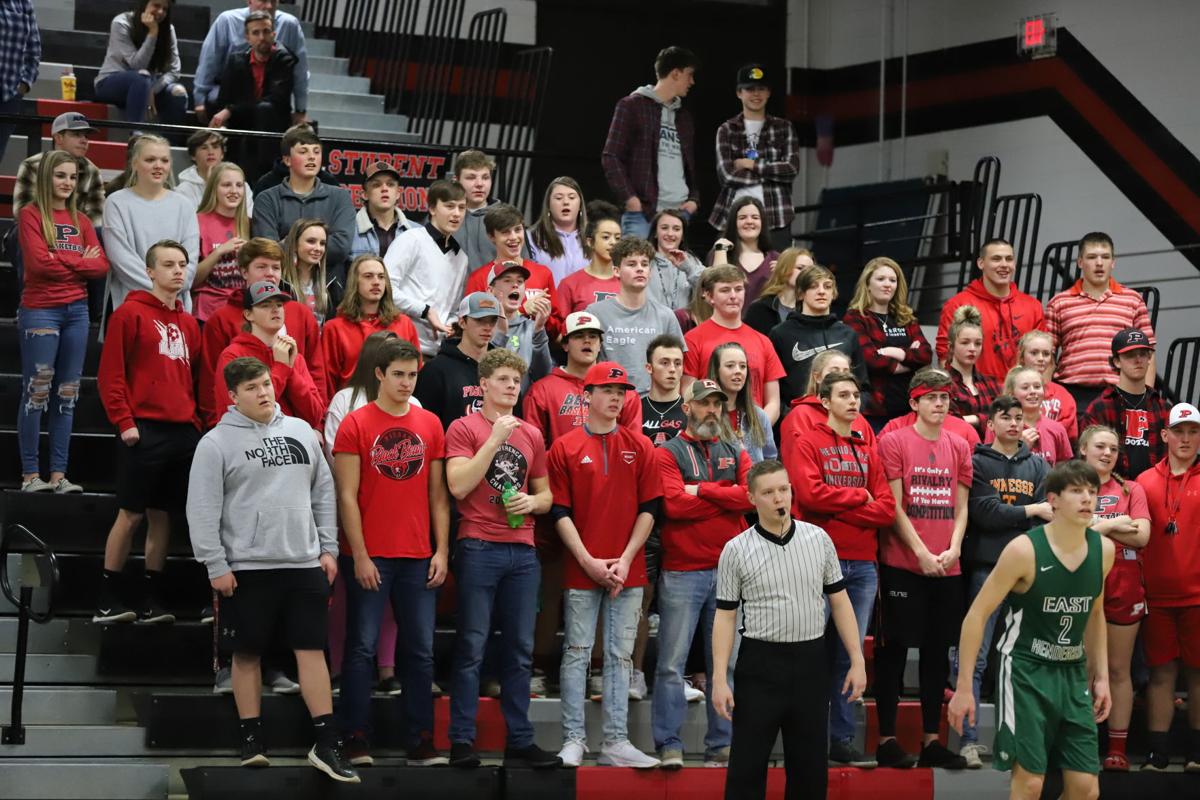 A CALMING PRESENCE — After the student section let the refs have it and drew a whistle, Casey Kruk stepped in to calm things down. 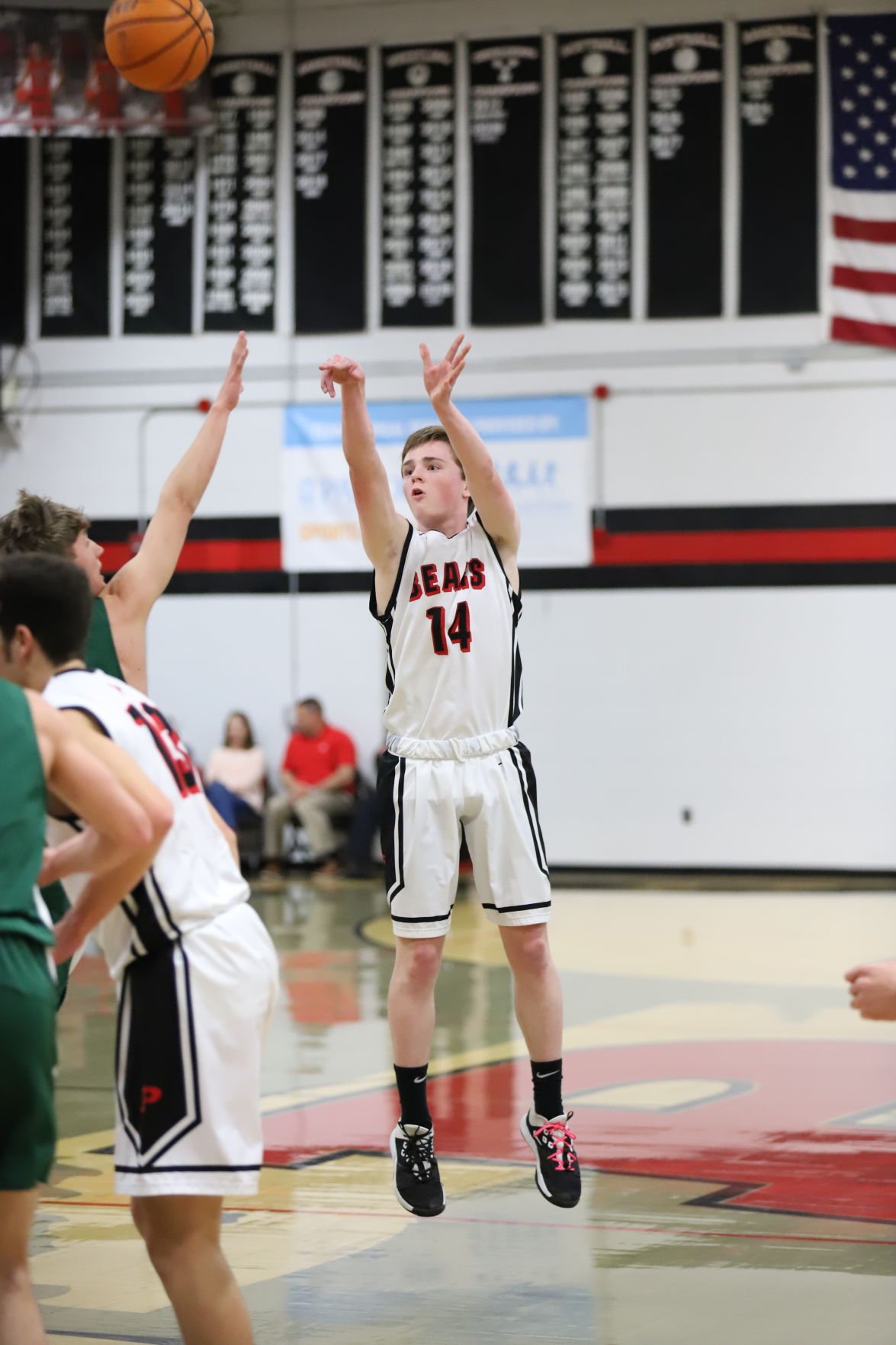 EARLY EFFORT — Max Wait hit a pair of 3s to score the Bears’ first six points of the game. 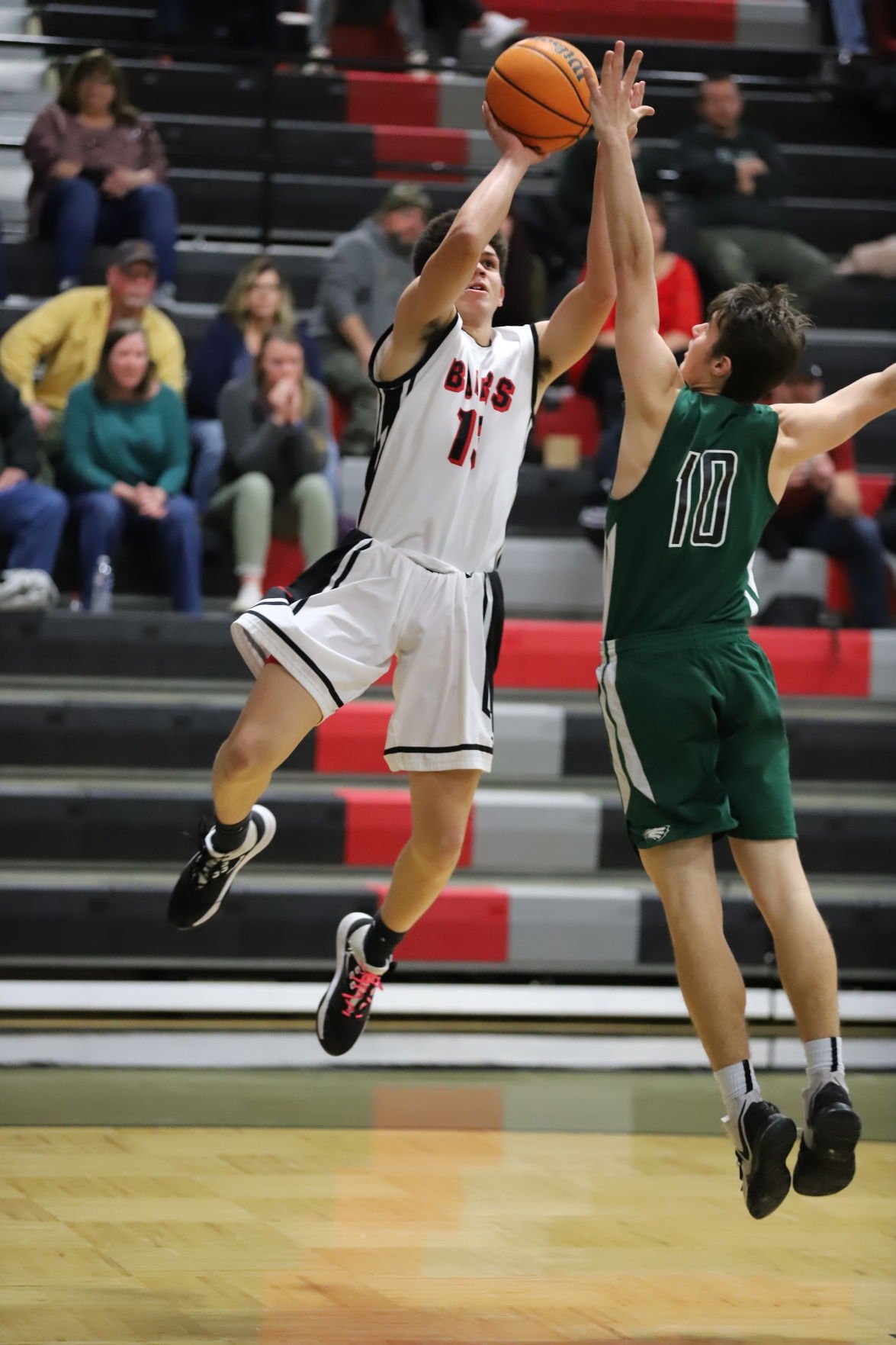 GOING UP — Bailey Neyman goes up for an off-balance shot. 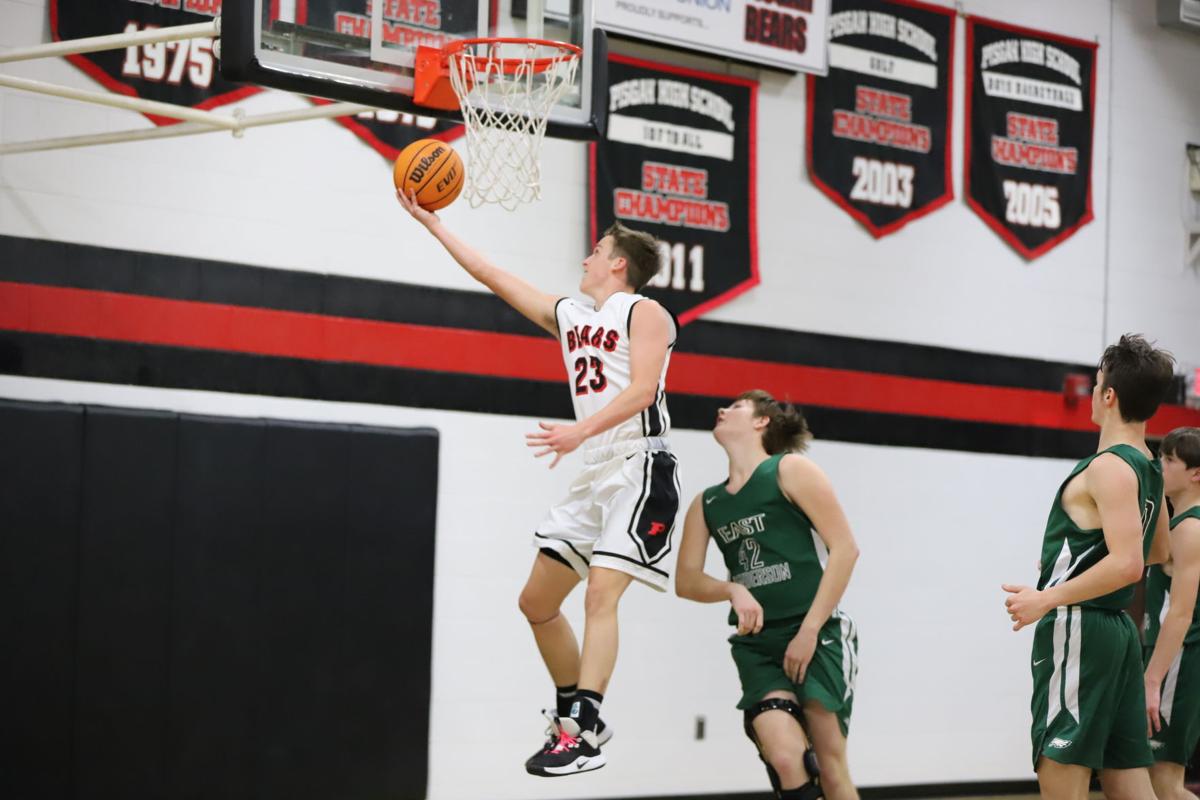 BREAKAWAY — Trent Devlin takes it to the rim on a fast break.

A CALMING PRESENCE — After the student section let the refs have it and drew a whistle, Casey Kruk stepped in to calm things down.

EARLY EFFORT — Max Wait hit a pair of 3s to score the Bears’ first six points of the game.

GOING UP — Bailey Neyman goes up for an off-balance shot.

BREAKAWAY — Trent Devlin takes it to the rim on a fast break.

Pisgah boys basketball has made it to the second round of its conference tournament after topping East Henderson at home.

Although the game began slow, the second half offered plenty of action, and although each team had their ups and downs, it stayed close throughout. But when it was all said and done, it was the fired-up Bears squad that was able to come away with the hard-fought, 54-42 win.

Leading all scorers was Max Wait with 15 points. Trent Devlin scored 11 while Matthew Roberts chipped in with 10. In addition, Korey Griffith and Bailey Neyman each had six, while Devan Dodgin had four and Brady Goolsby had two.

Head coach Jonathan Whitson said he was happy to see him team improve as the game went on.

Both teams came out cold to begin the game as the score was 2-0, Eagles, until over three minutes in when Wait buried a wide-open 3 to give the Bears a one-point advantage. Then, just a minute later, he found himself wide open again, this time in the right corner, and was again able to convert to give Pisgah a 6-2 lead.

However, the Bears found themselves in foul trouble early, as just five minutes into the game, they had five team fouls, and Roberts went to the bench midway through the first quarter with a pair of fouls.

Although Wait was able to hit another 3, the game stayed close throughout the first frame, and the score going into the second quarter was just 9-9.

Neither team scored a point for the first three minute of the second quarter, and even when either the Bears or the Eagles looked to be catching their stride, they’d go cold again just as fast. Near the end of the second half, things got heated when the refs made a controversial technical foul call for the Bears having too many players on the court, and the crowd let them have it. Pisgah head coach Jonathan Whitson even became so infuriated that he got called for a technical foul.

After another iffy foul call, the refs blew the whistle to warn the fan section, which sent the entire crowd, parents and all, into a frenzy. Just like that, the Bears were down four and had to claw their way back to a three-point lead.

Whitson said he knew going into the game that East Henderson likes to slow the pace and force opponents to settle for jump shots.

"We tried some things like trapping to try to speed the play up a bit," he said.

And it worked. Pisgah came out of the gate with a full head of steam to begin the second half, seemingly scoring at will on the fast break and from beyond the arc. The impassioned Bears were relentless on defense while still showing poise on offense, and within about five minutes grew their lead to 10 points. However, East Henderson made a run of its own to narrow Pisgah’s lead to just 35-32 at the end of the third quarter.

In the beginning of the fourth quarter, the teams went back and forth before Roberts began taking over in the paint, getting offensive rebounds and points by simply overpowering the Eagles’ defenders on several possessions while also getting a few rebounds and even a crucial block on the defensive side.

The Bears were able to slowly grow their lead to 11 points with just three minutes left in the game, and from there, they controlled the pace to hold onto that lead and secure the win.

While Whitson said he was happy with the play of Wait and Roberts, he also mentioned a couple of other players who stepped up.

"I thought Korey was really good off the bench on defense," he said. "He had some nice steals. He got a steal around mid-court on one play, and went down and got a tough layup."

Whitson said he believes his team's grit that was on display Friday night was indicative of improvements that have been made throughout the season.

"We’ve grown as a team," he said. "Our chemistry as a team has gotten better. The guys bought into the defensive side. Like I said, that’s where our offense comes from. We want to get out and run."

Pisgah will hit the court again Tuesday in the next round of the conference tournament against Smoky Mountain at East Henderson High School at 8:30 p.m. Whitson said he plans on taking a look at some film and coming out ready.

"We gotta take care of ourselves and do what we do," he said. "I think hopefully we’ll like where we are at the end of that game."