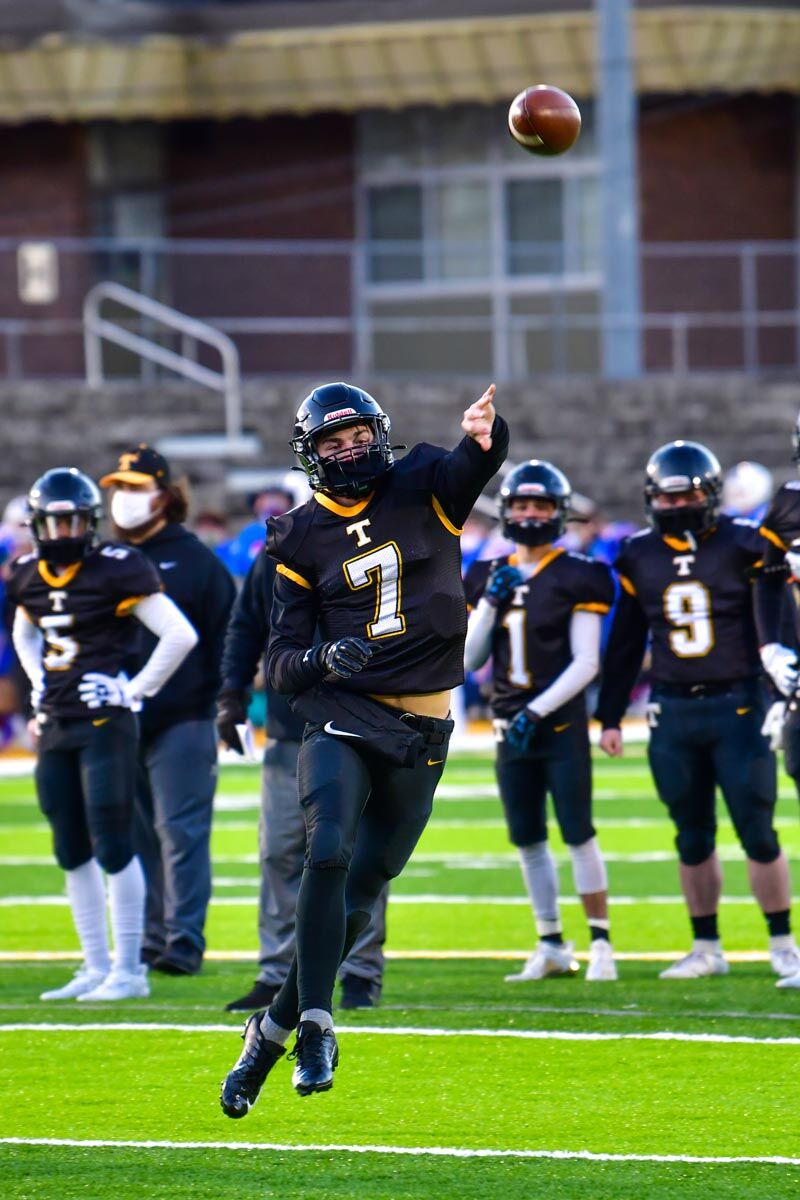 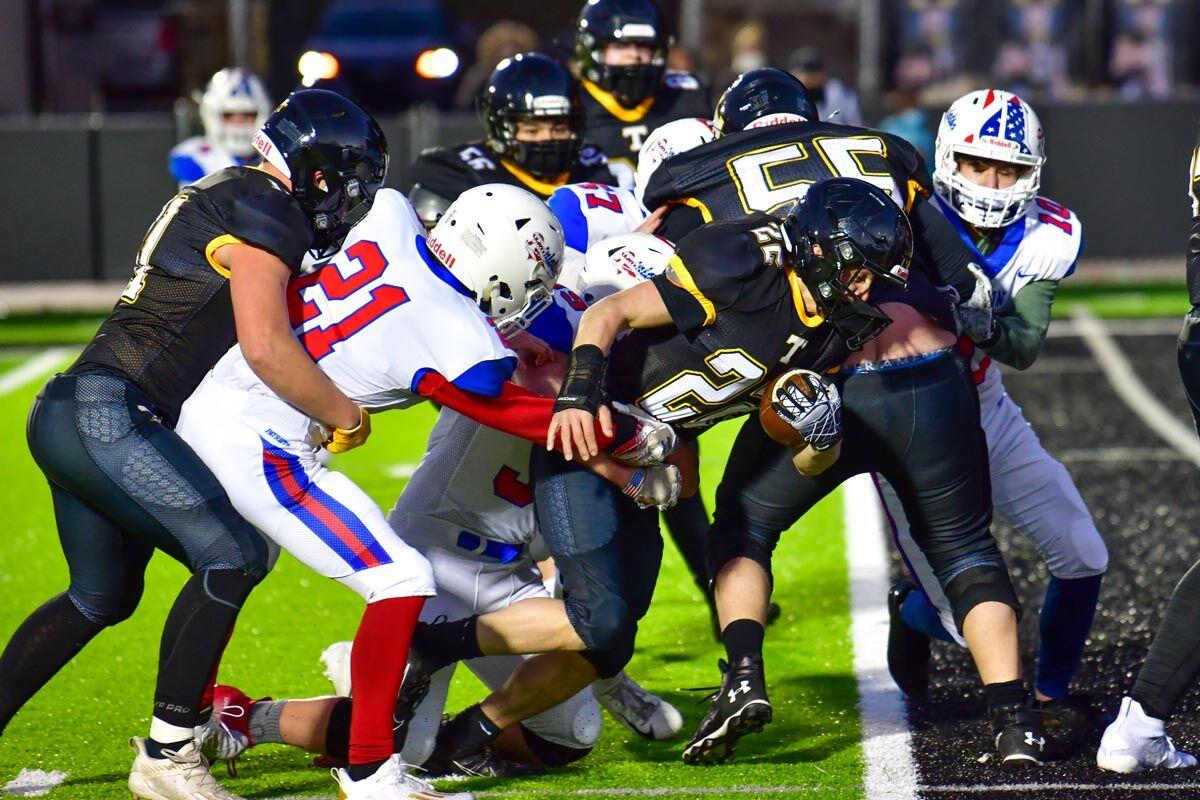 LAST PUSH — Running back Coleman Cothern makes one final effort to power through defenders into the end zone. 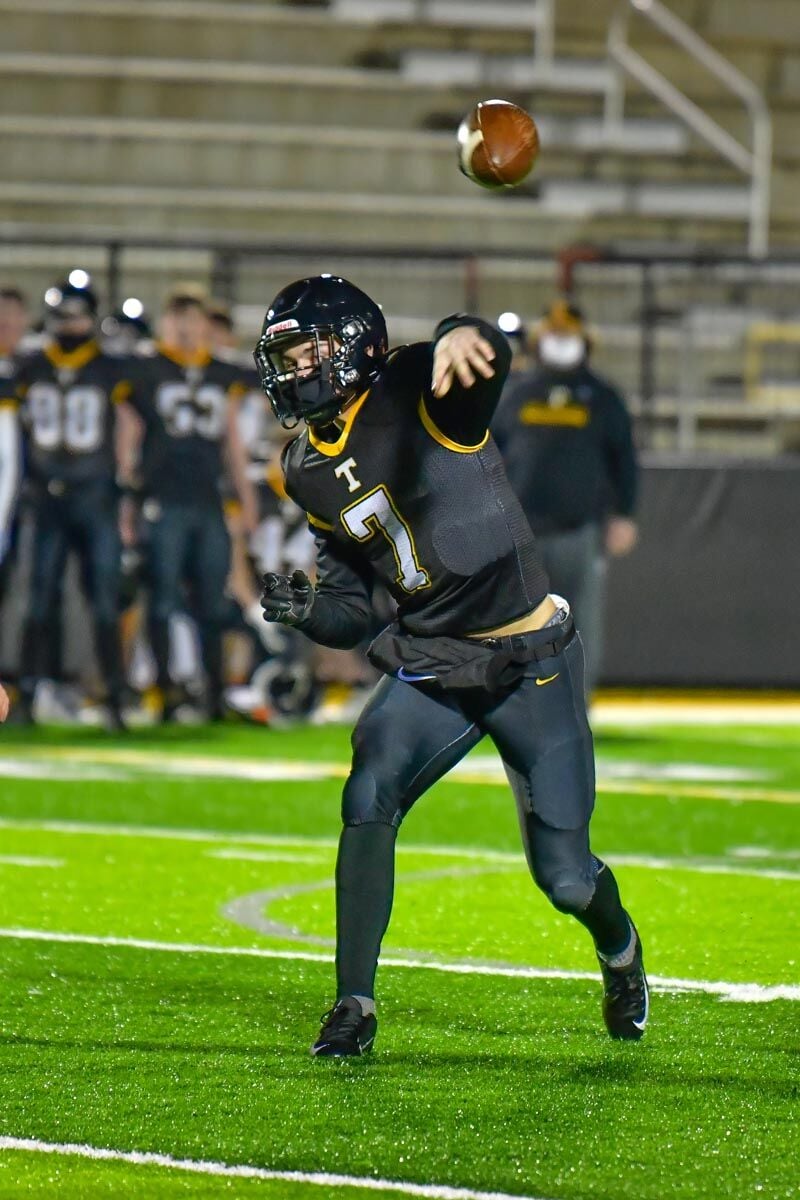 LAST PUSH — Running back Coleman Cothern makes one final effort to power through defenders into the end zone.

Ask about a few players to watch in an upcoming football season, and most coaches start with the quarterback, a running back or receiver.

Some might instead first mention a highly recruited defender.

“The reason is, since COVID hit, I’ve turned into an offensive lineman, because I’ve put on 30 pounds,” Brookshire quipped before offering the real explanation. “You’re only as good as you are up front. Yes, Tampa Bay won the Super Bowl because Tom Brady’s good, but I’m telling you right now they won that game because of the front line on both sides of the football, period.

“If you want your team to be a team of caring and loving each other, you make sure that your linemen are leading your team because they love more than anybody on the team. It’s in their DNA. They are protectors.”

Before quarterback Jared Penland can throw a tight spiral to tight end Ezra Burgess or hand off to running back Garrett Fox, the big men up front must give them space to operate. Mountaineers in the trenches include junior center Jacob Broom (6-foot-4, 285 pounds), junior right guard Jason Langley (6-2, 265), senior right tackle Hunter Murphy (6-3, 250) and seniors Josh Green (6-2, 280), the left guard, and Greyson Jones (6-3, 250), the left tackle.

“The common denominator with all those guys is they’re all best friends, they all hang together and they can run,” Brookshire said. “When I got here, I figured the No. 1 thing killing us was strength. So we really put a lot of emphasis on the weight room. But those kids can really run.”

Excited as Brookshire is about his blockers, they’re equally thrilled with the energy he’s brought to their side of Haywood County.

“It’s just a whole different feeling everywhere, I mean in the locker room, in the weight room and the field,” Broom said. “I’ve never been this excited about a football team.”

A year after going 4-7 overall and tying North Buncombe for fifth in the Western Mountain 3-A Conference, Tuscola is hoping Brookshire can work some of the same type of magic he managed at Smoky Mountain a few years ago.

In his inaugural Jackson County season back in 2016, he led the Mustangs to their first winning record in 17 years.

A 1988 Tuscola grad, Brookshire has an especially personal stake in helping the Mountaineers turn things around. He said the key at Smoky, and now at Tuscola, was convincing the school’s top athletes to put on helmet and pads while also encouraging last season’s top players to stick around.

He’s been successful on both counts.

“We run that fast-tempo kind of offense, and kids love to go out and catch and run,” Brookshire said. “Tuscola traditionally has been hit with a lot of transfers, and that’s something we wanted to prevent from happening. We did have one kid who went to a private school, but we’ve had a couple of kids who just moved to the area.”

One of those is Penland, the projected starter under center. He transferred to Haywood County after amassing 1,861 passing yards with 17 touchdowns and 12 interceptions as a sophomore at Erwin.

In addition to the skills he brings to Tuscola, his light-hearted approach has allowed him to build some instant chemistry with his new teammates.

“He’s a pretty goofy guy, but I like him,” offensive lineman Jones said with a chuckle. “He’s a character.”

One of the top returning skill-position players is Fox, a 5-9, 150-pound senior who led the Mountaineers with more than 750 rushing yards a year ago. Also at running back is senior Coleman Cothern (5-9, 165).

Brookshire’s fast-paced offense requires a lot of receivers, and the coach likes the fleet-footed athletes he’s got filling those slots. Among them is last year’s starting quarterback, senior Nick Rich (6-4, 195), who’ll be on the outside edge along with classmate Justin Furman (6-3, 150).

At the slots are Lunsford and a guy Brookshire calls one of the best athletes and strongest players on the team, sophomore Jett Benson (5-10, 180). Also helping out on the receiving corps will be seniors Jesse Delcambre (5-9) and Clay Burgess (6-0, 145).

While the defense won’t have the size and scale to match the offensive unit, the coach said the Mountaineers will have speed to burn when opponents have the ball.

“We got some little guys over there to just run and hit you,” Brookshire said. “I’ve told everybody they’re going to be like a bunch of yellow jackets, you know. We’re going to be stinging people. They’re just tough kids.”

To punctuate that point, Brookshire said middle linebacker Jadon Mintz (5-11, 215) has given the Mountaineers’ O-line fits in practice.

Mintz is another of Tuscola’s two-sport athletes as he’s also a standout wrestler, and Brookshire likes what the junior brings to the football field as well.

“We haven’t been able to block him yet,” Brookshire said. “That’s good because they’re making this ‘good-on-good’ and making each other better.”

At the corners, Lunsford and Benson will split time with Delcambre and Clay Burgess.

Collectively, Brookshire is especially pleased with the numbers who’ve turned out this year.

“We feel like we have good depth everywhere except inside linebacker,” Brookshire said. “We have kids we can move in there, but we have three — and that’s the only place we don’t have six or seven kids at. They finished last year with high 20s on the roster, I think. I told our coaches that even though we’re not a 3-A school because we have 2-A numbers, we need to have 38-to-42 kids on this roster so we can create competition.”

As for an outlook for this season, Brookshire acknowledged that starting on the road at perennial powers Pisgah and Asheville is no small task — but he’s not putting a limit on what the Mountaineers can do if they start out on a roll.

“I really feel like if we can handle Pisgah and handle Asheville, there’s no telling what can happen on the flip side of that,” Brookshire said. “You know the kids are always geared up for that Pisgah game: Coaches, families, everybody. It’s the talk of not just our area but everywhere. You know the emphasis on that game.”