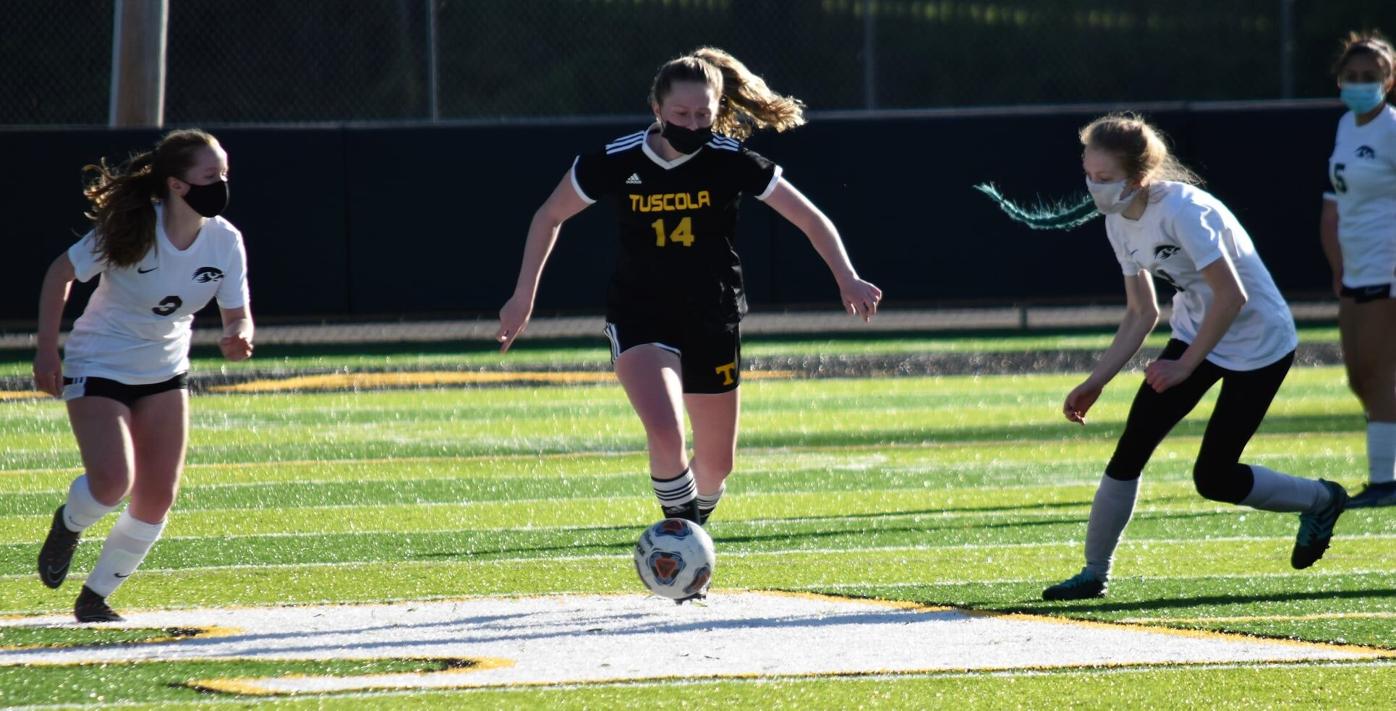 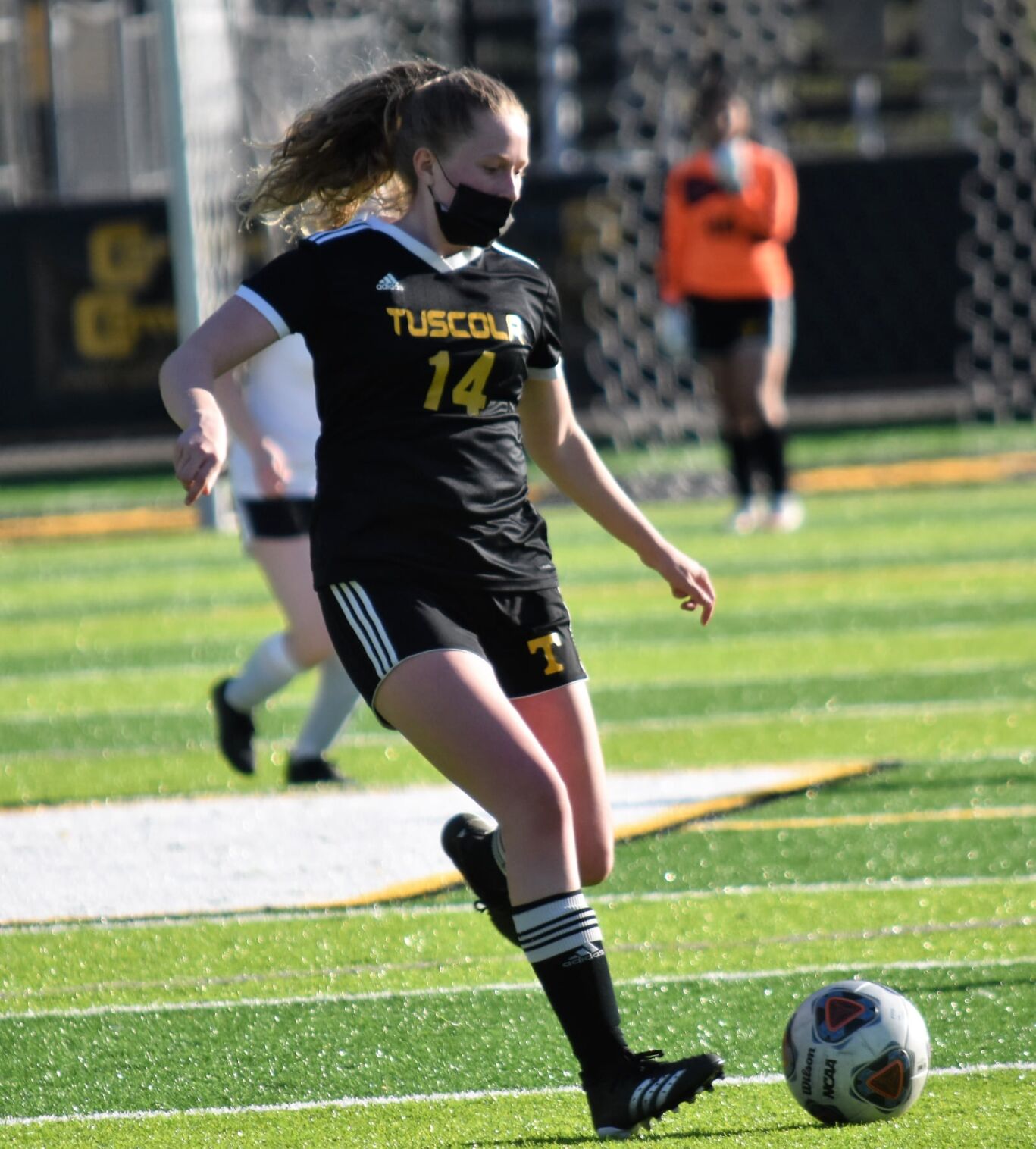 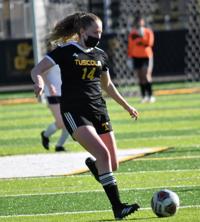 READY, AIM — Cooper Richardson lines up and takes a shot during Thursday’s game against North Buncombe. 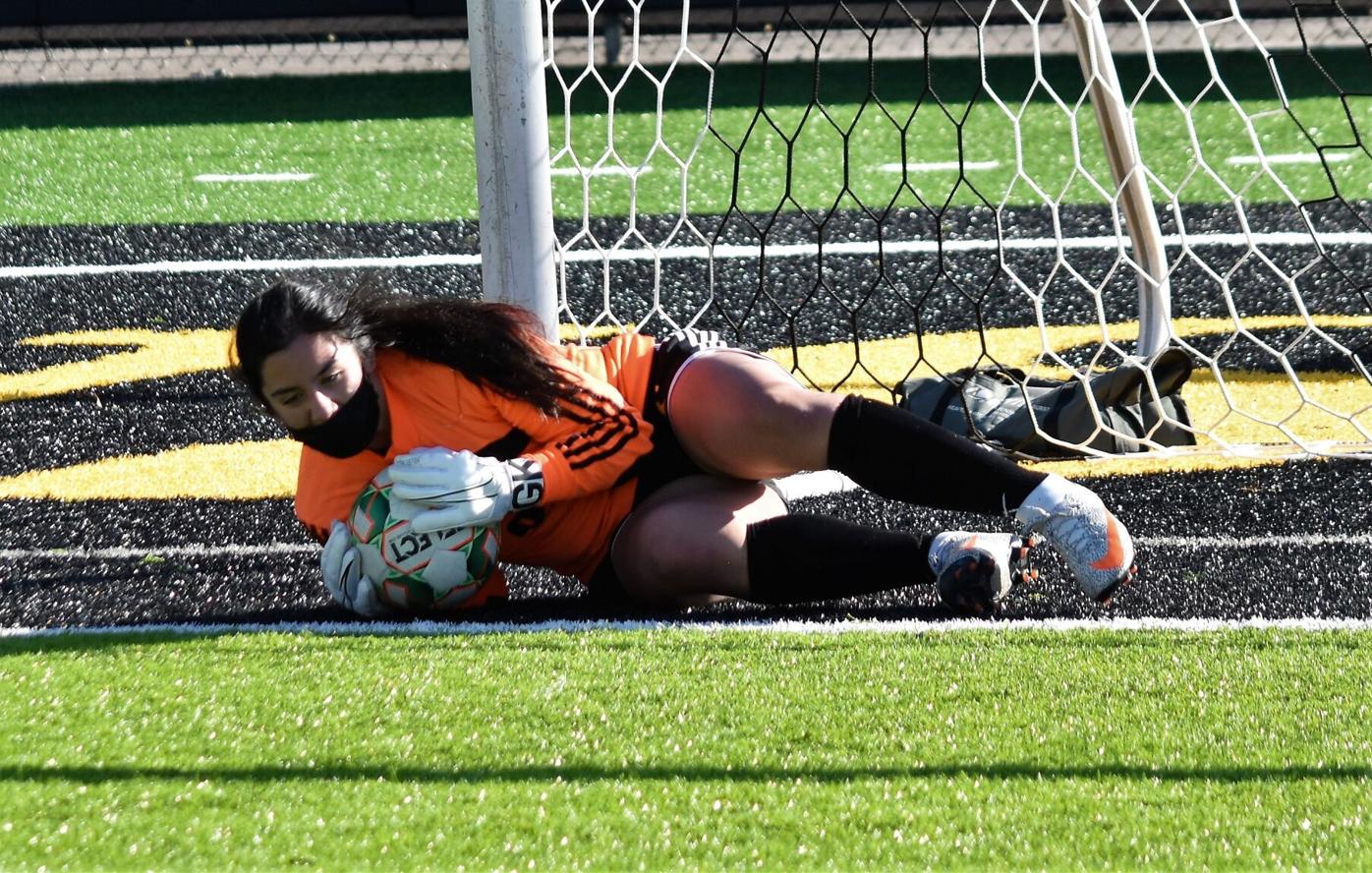 STOPPED — Mountaineers goalkeeper Hannah Empeno blocks the ball for a save. 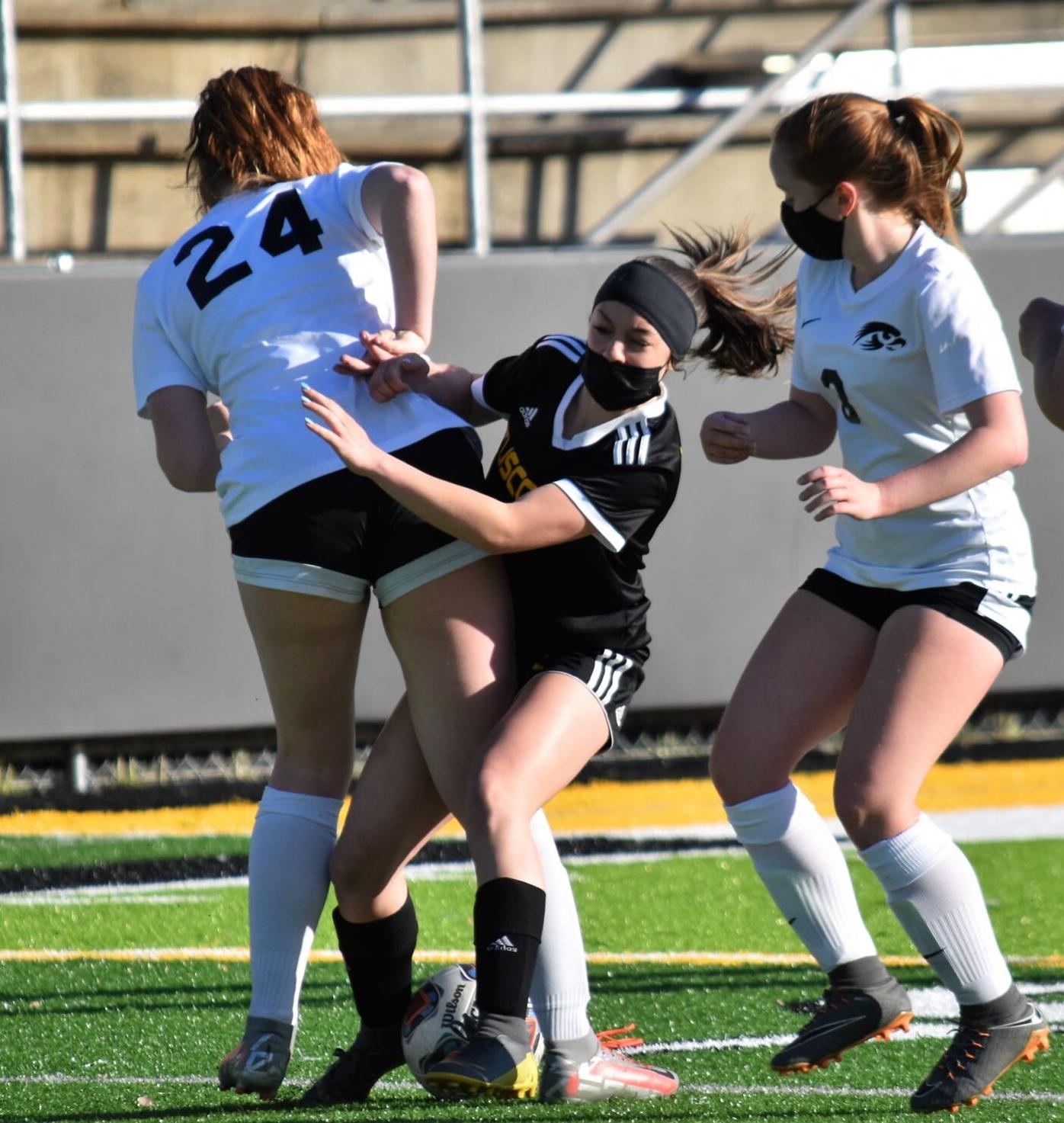 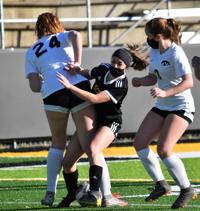 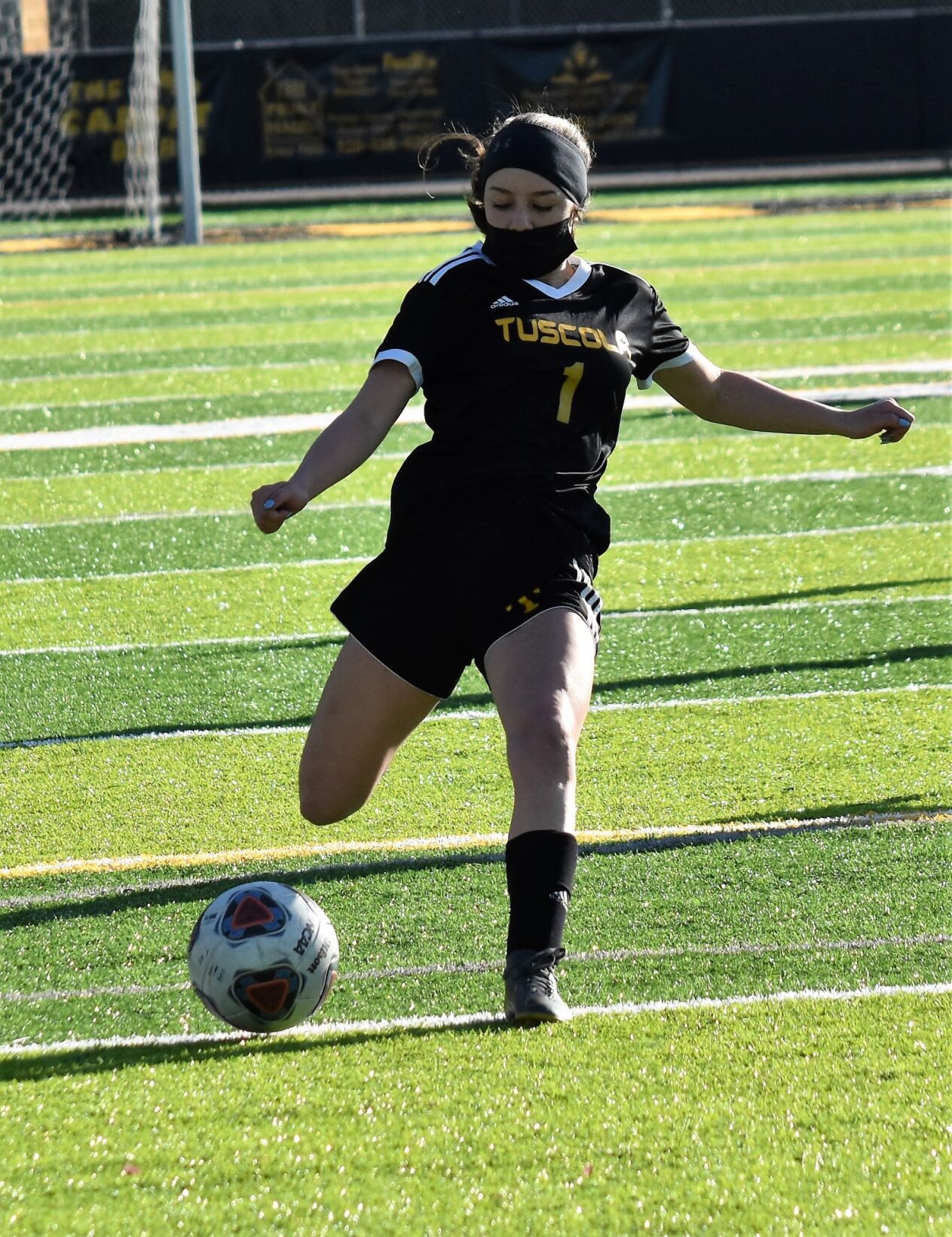 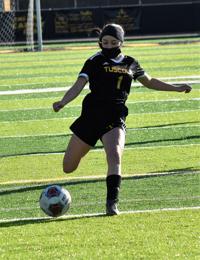 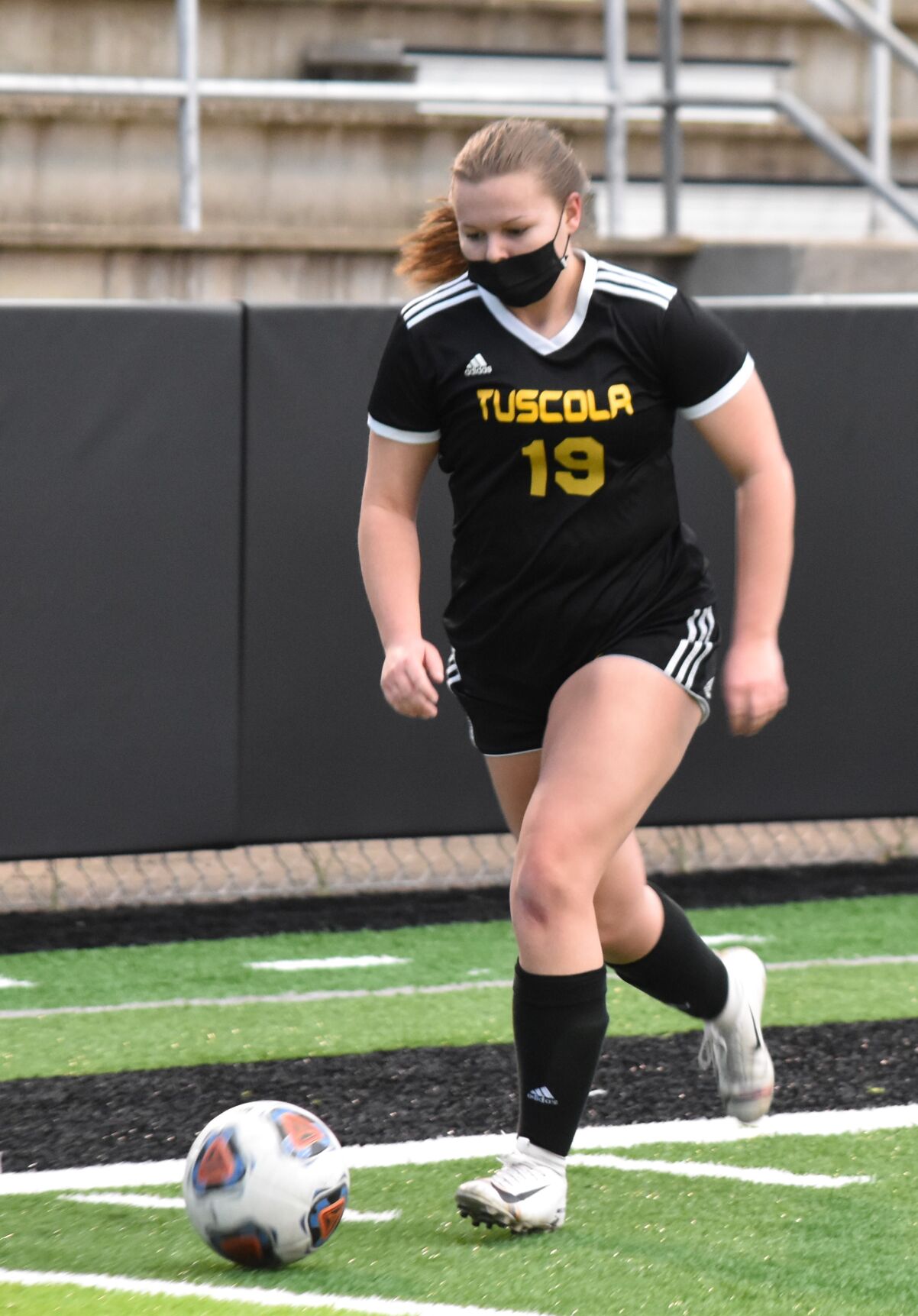 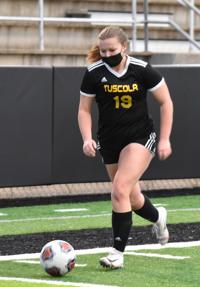 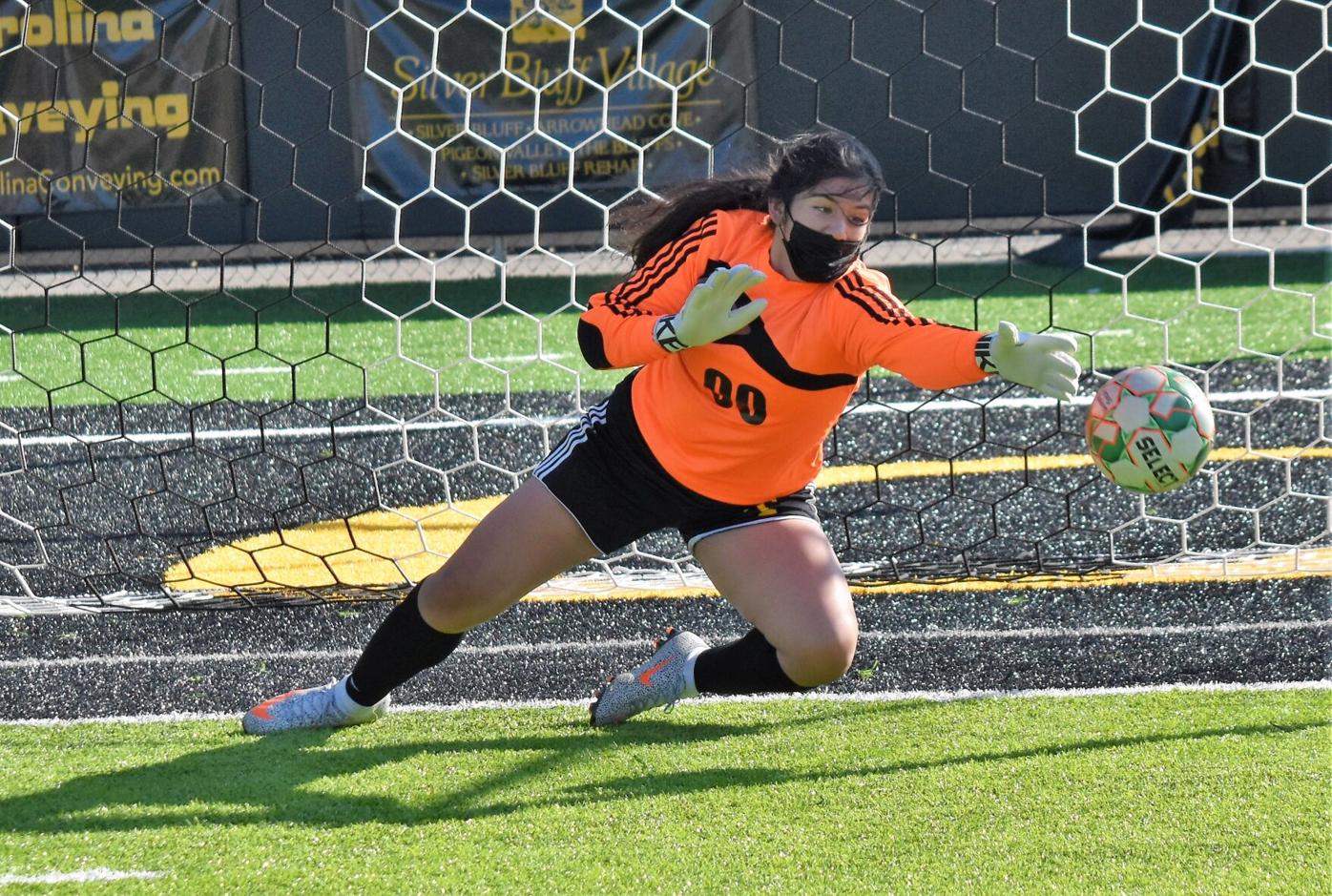 READY, AIM — Cooper Richardson lines up and takes a shot during Thursday’s game against North Buncombe.

STOPPED — Mountaineers goalkeeper Hannah Empeno blocks the ball for a save.

Tuscola broke its five-game losing streak when it shut out Erwin, 3-0, on Wednesday.

“There was an unusual amount of pressure in this game because we knew it was winnable and we knew that we needed it to salvage the rest of the season. My girls, my coaches and I needed this win to get our confidence back to raise our spirits and to be reminded that we love the game,” said Tuscola Head Coach Liz Epps.

Mountaineers senior Grace Glance added to her coach’s comments about the win, saying, “We fought hard and played with our hearts. I knew that if we played as a team, we would be successful and defeat Erwin.”

“By increasing our communication, connecting passes and working together as a team is how we won the match,” said Skylar Sutton.

Tuscola’s Sutton scored the first two goals of the match, earning a brace, while teammate Cooper Richardson scored the final goal that sealed the win for the Mountaineers.

“Skylar got us on the scoreboard with two early goals, and she and Cooper controlled the middle of the field,” said Epps. “I’m so proud of them for fighting through it.”

When I scored the first goal, I thought to myself, ‘thank goodness, it’s about time,’ as we were unable to score in the previous games,” said Sutton. “It was great to score the goal, which put us back on the winning track,”

“I’m mostly proud that after a five-game losing streak, the girls came together and handled business. It gave us the boost we needed. As a team, you are not defined by how many losses you have or who you lose to. What defines you is how you bounce back and recover from those losses and come back together as a team to find success,” said Epps

The next day, on Thursday, the Mountaineers stepped onto the pitch to take on North Buncombe at Weatherby Stadium.

“It felt so good to be back on our turf after five away games,” said Coach Epps. “As Mountaineers, we take a lot of pride in the ability to play on our turf, in C.E. Weatherby stadium, with the faces of our loved ones and friends in the stands.”

The Mountaineers notched another win and shutout, with a score of 4-0, against the Black Hawks.

“We played for fun against North Buncombe,” said Richardson. “The team dynamics were there and it showed in how we played.”

Tuscola Mountaineers Mallarie Fowler, Natalie Bolden, Sund and Richardson each tallied a goal for the night.

“I had played defense for the last three games,” said Sund. “Coach Liz said to me ‘score a goal’ and put me in as a forward. When I shot the ball past the goalkeeper into the net, I thought of what Coach Liz said and ‘I did it. I scored a goal!’ It was nice to be able to score a goal for Tuscola.” Reese Sund.

“We learned in previous scoreless games how crushing it can be to not have any points on the board and have a last-minute goal scored against us with no time left on the clock to get it back. We didn’t want to feel that anymore. I’m thankful that Mallarie (Fowler) put us on the scoreboard early and I’m especially excited that two girls who are playing for the first time on a Varsity level team this year, Reese Sund and Natalie Bolden, were able to each earn a goal for Tuscola. Skylar sent in a beautiful corner at the end and Cooper’s goal made us all so excited! “ THS Coach, Liz Epps

Richardson’s goal was a header into the goal off a corner kick from Sutton — the first header in her high school career.

“As I was heading the ball, I thought, ‘Wow. That hurt my head,” Richardson said. “The goal really surprised me. I had never headed the ball into a goal before. It was awesome.”

Goalkeeper Empeno recorded another shutout and four saves during the match.

“It felt so good to be able to hold our heads high at school that Friday knowing that after five losses we were able to get two wins on back-to-back nights,” added Epps.

The Mountaineers held their own against a very physical and fast team and showed their sportsmanship on the field.

“This was a loss that felt like a win because of our heart and our teamwork. More importantly, I’m extremely proud of how the girls held up their heads with class, dignity and sportsmanship throughout the match,” said Coach Epps.

“I’m blown away by how hard our girls battled, trusted each other and didn’t back down. This was our girls’ third game in a row and up against a team who was 9 and 1, and who plays very straight with speed. Unlike teams like Asheville, who like to possess and patiently build their attack, AC tries to find the gaps, play physical and let their speed get them behind defenders. We were prepared for all of that. We put girls at defense who have never played that position to try to match A.C.’s speed. We stacked our defensive line with smart defenders like Hannah Wells, Zoe Mina and Eva Rinker, who covered gaps well and we battled.”

“Every year we come into this game as the underdog. Tonight, everyone did their job. Defense worked hard to protect our amazing keeper, midfield fought hard to get the ball up the field, and forwards pushed to create opportunities. That’s all we can ask for in a conference like this. I’m really proud of my team tonight,” said Hannah Wells

“It was a very physical night. We knew we had to be tough and stay strong. Everyone worked so hard and I am so proud of how much we’ve grown,” said Tuscola’s Eva Rinker.

The match was especially significant to Tuscola’s goalkeeper Empeno, who had her jaw broken in two places last year in a match against ACR.

“The match was intense, and I had to dive for the ball at the players’ feet, which scared me. I just wanted to play and not get hurt. My defenders, Reese Sund, Gracie Glance, Zoe Mina, Eva Rinker and Hannah Wells were amazing,” Empeno said.

I was happy they were defending me and the goal. We worked really hard together as a defensive team and it showed! “My absolute MVP of the game was Hannah Empeno. I couldn’t possibly be prouder or more impressed by her. I knew she went into this game, against this team, terrified from the trauma she endured last year getting kicked in the jaw, breaking it in 2 places and having it wired shut. She could have easily sat back in the goal and froze in fear, but she persevered and stepped it up for our team. I don’t know that I could’ve been as brave. She utterly amazed me.” Coach Epps. Empeno recorded 12 saves throughout the match.