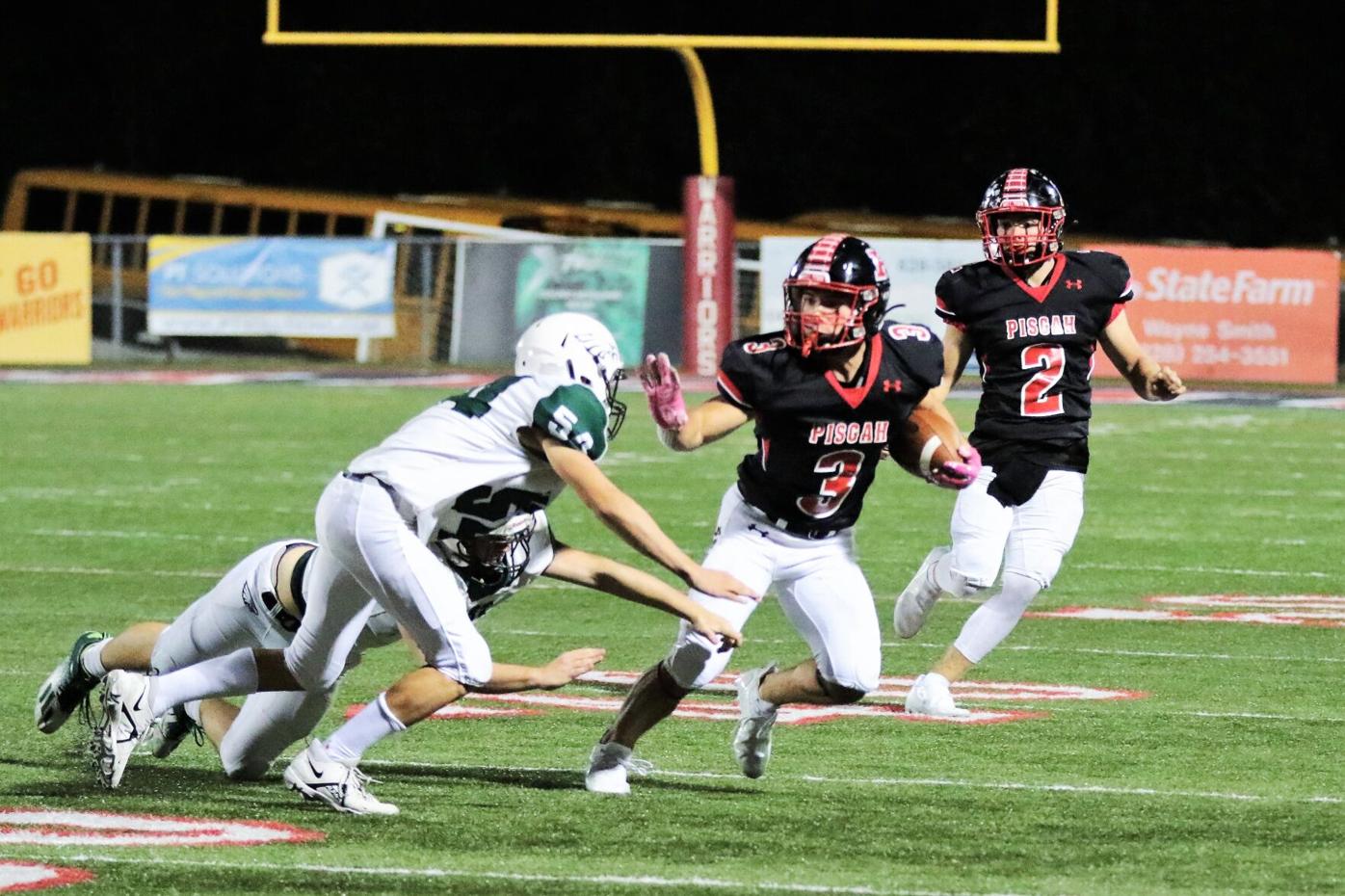 Pisgah junior running back Dez Rodriguez looks to break a tackle with his pink gloves on during the Bears’ win over East Henderson Oct. 22. “It means a lot to me if you’re on the other team, if you’re on my team, if you just throw on a little bit of pink,” he said. 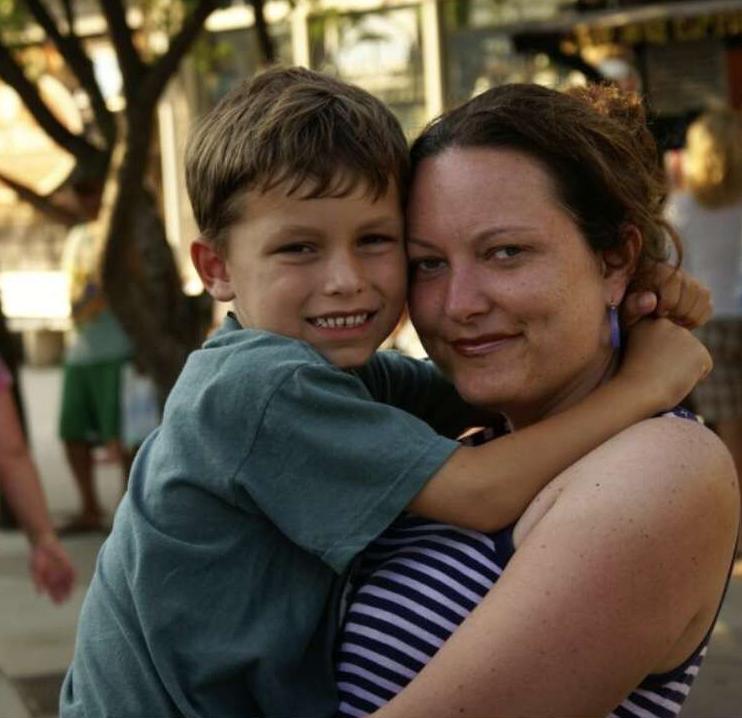 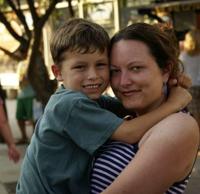 A young Dez Rodriguez and his mom, Melanie Williams Rodriguez. 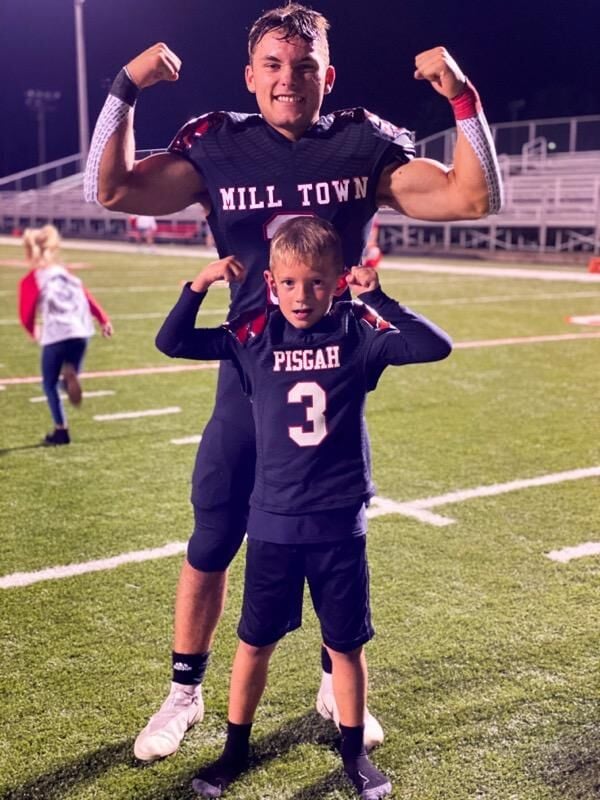 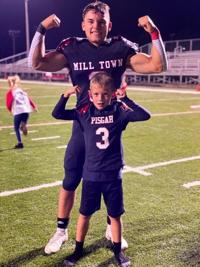 MUSCLES — Dez Rodriguez and Duke Hannah flex their muscles after a Pisgah win earlier in the season. 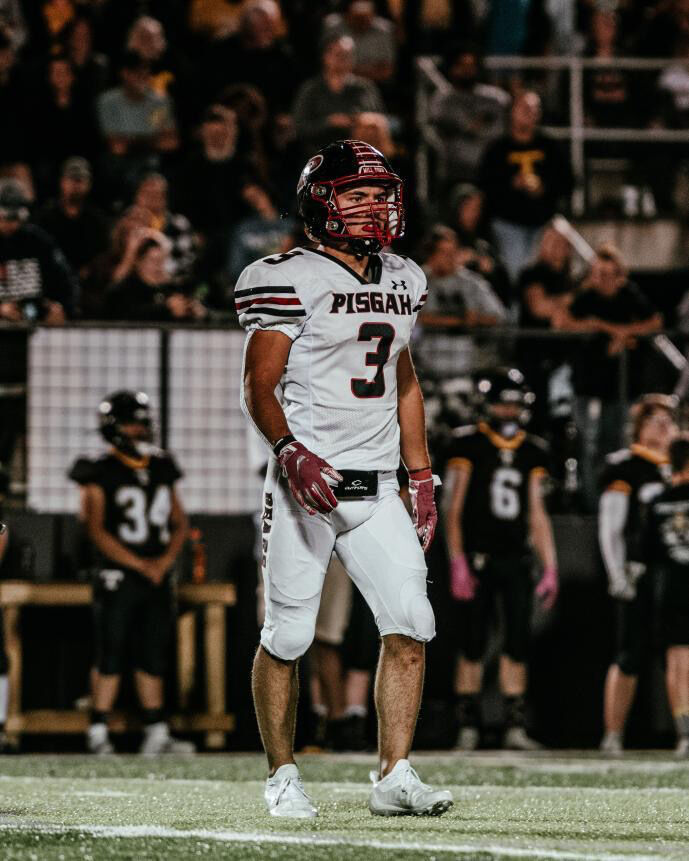 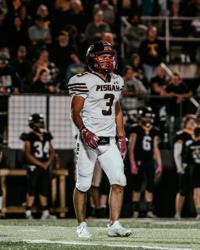 IN MEMORY — Dez Rodriguez’s pink receiving gloves honor his late mother, Melanie, who passed away from breast cancer in 2018. 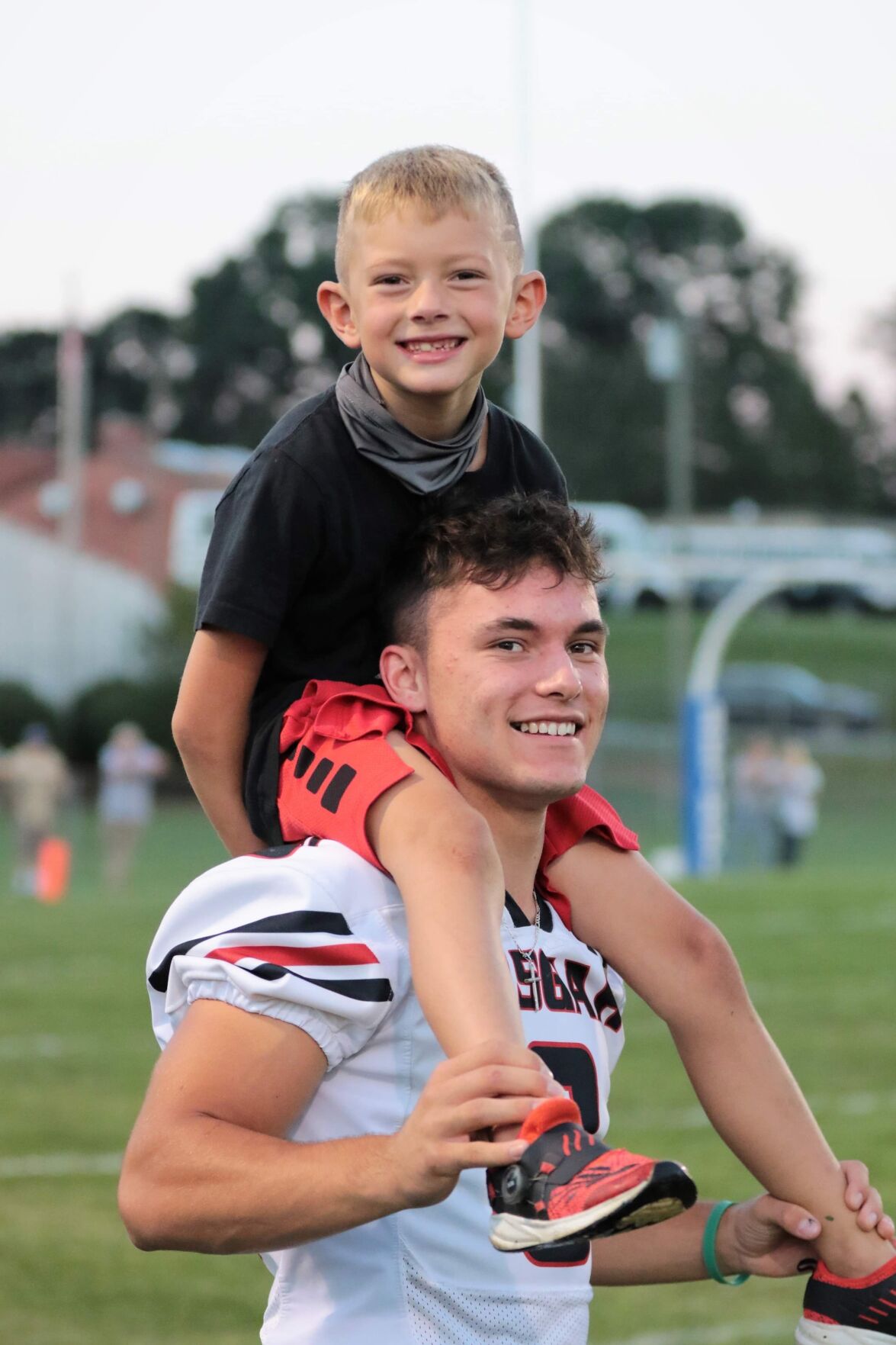 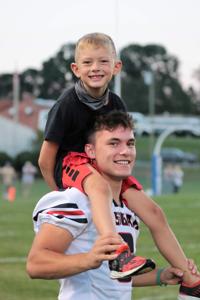 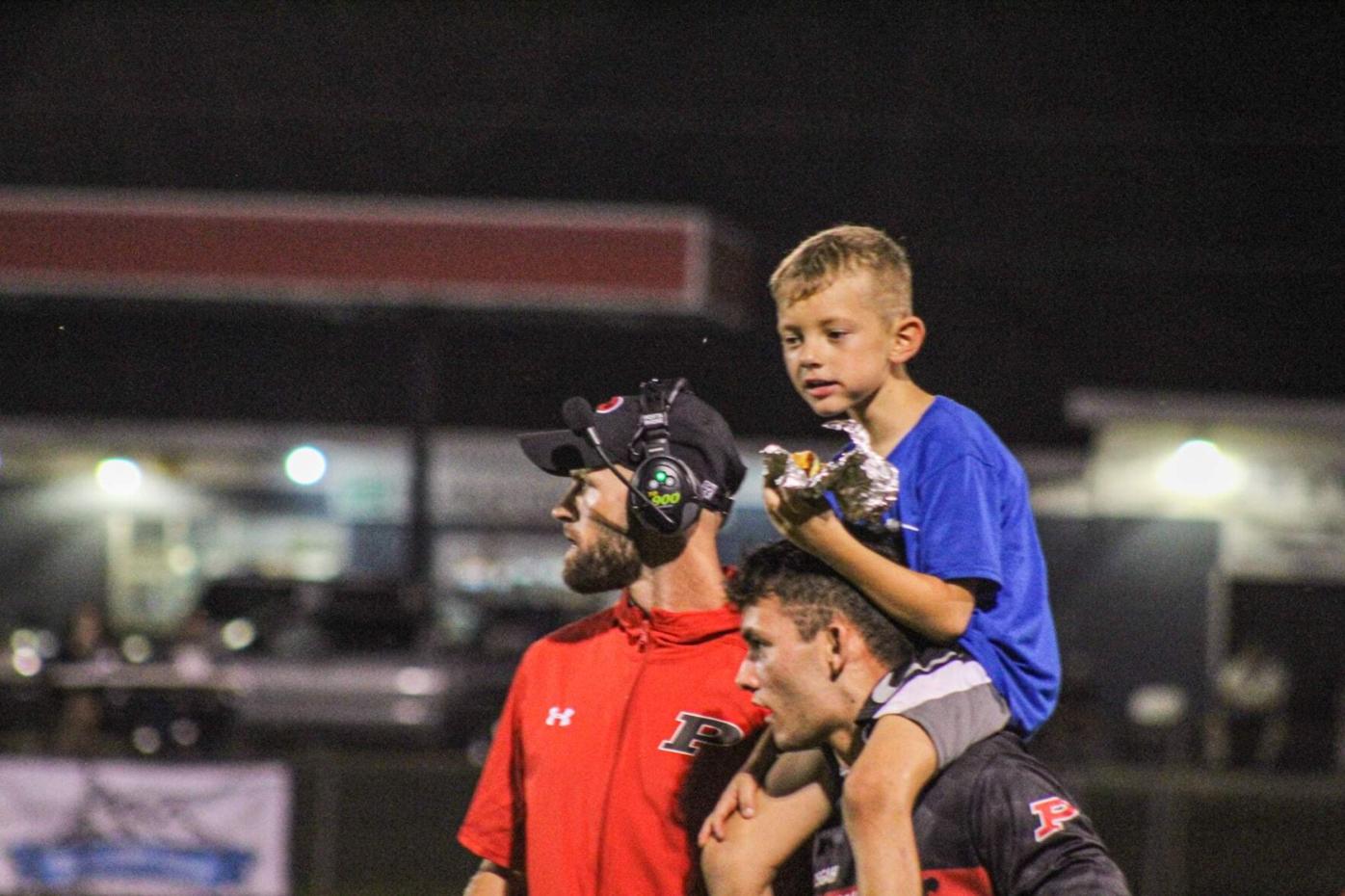 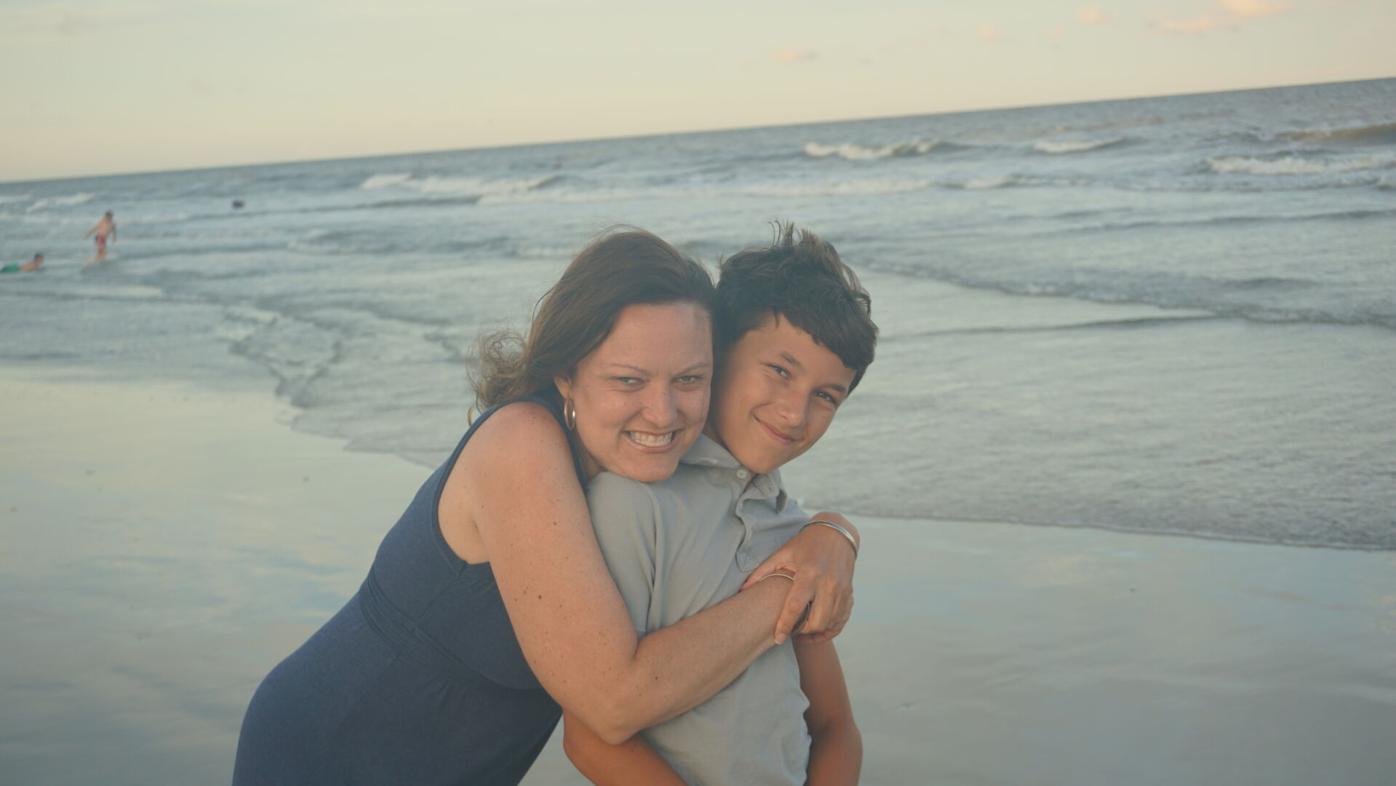 Dez Rodriguez and his mother, Melanie Williams Rodriguez, were all smiles during a trip to the beach.

Pisgah junior running back Dez Rodriguez looks to break a tackle with his pink gloves on during the Bears’ win over East Henderson Oct. 22. “It means a lot to me if you’re on the other team, if you’re on my team, if you just throw on a little bit of pink,” he said.

A young Dez Rodriguez and his mom, Melanie Williams Rodriguez.

MUSCLES — Dez Rodriguez and Duke Hannah flex their muscles after a Pisgah win earlier in the season.

IN MEMORY — Dez Rodriguez’s pink receiving gloves honor his late mother, Melanie, who passed away from breast cancer in 2018.

Dez Rodriguez and his mother, Melanie Williams Rodriguez, were all smiles during a trip to the beach.

October was a crucial part of the schedule for the Pisgah High School football team. The Bears went 5-0 in the month, including a comeback win over rival Tuscola, and clinched the Mountain Seven Conference championship.

Dez Rodriguez, a junior running back for Pisgah, was thrilled with his team’s success, of course. But October, also known as Breast Cancer Awareness Month, is a special month for Rodriguez because of much more than important football games.

When he was 14, Rodriguez’s mother, Melanie, lost her fight with breast cancer after 13 years.

“It was extremely hard,” Rodriguez said. “Not only was it hard for her, but it was hard for me to watch her, especially going back and forth from the hospital, especially on school nights. It’s kind of hard for me to see other kids with moms that are well in health. I just thought life was unfair to me.”

In the time directly after his mother’s passing, Rodriguez admitted he got mad easily and struggled to understand why this had to happen. But in that same breath, Rodriguez said the experience gave him strength he didn’t know he had and helped make him a better person.

For folks like Rodriguez who’ve been affected by breast cancer so closely, pink carries a much stronger meaning than other colors.

Growing up, Rodriguez used to deck himself out in all pink and participate in Breast Cancer Awareness runs to honor the battle his mom had been engaged in since he was a baby and show support for others in the fight.

Even through participating in events like that, Rodriguez said he had “no idea” just how serious the situation was until he got older.

Before she passed, Melanie wrote him a note saying he was the reason she kept going for as long as she could. She told him she loved him and encouraged him to be strong.

“I live every day by that,” Rodriguez said.

According to her obituary, Melanie was a federal employee for the Department of Defense from 2001 until 2018.

“However, Melanie would hands down say her most important job was to be a mother,” the obituary reads. “She loved her son and fought daily to remain here with him, to raise him. She loved him more than anything on Earth. They did everything together and shared many invaluable travel experiences.”

As Melanie was raised in Haywood and was a graduate of Pisgah High School, Dez felt it was important for him to finish his high school years at his mom’s alma mater. On top of the strong football tradition, Dez has enjoyed being part of the community that knew and loved Melanie.

“I have some teachers that knew her. I’ve got a coach, Jody Mathis, that was best friends with her and I think that’s awesome. I appreciate them telling me funny stories about her,” Rodriguez said.

A strong example of the support provided by the Pisgah football community is that Rodriguez currently lives at the home of Jacob Hannah, the Bears’ JV head coach and varsity assistant coach.

Hannah and his wife, who have two kids already, had been looking into the possibility of adopting or hosting a student exchange student when they heard Rodriguez was looking for a place to stay.

Hannah also talked about how Rodriguez’s character and the way he lives his life with so much positivity is a testament to who his mom was.

“I think it goes to show how he was raised by his mother. I never met her, but just from talking with him and everything, it sounds like she was resilient as well, and she raised him to be the young man that we see today, along with his father,” Hannah said. “You would never know that kid has gone through what he’s gone through.”

Neyland Walker, a former Pisgah standout offensive lineman who earned a scholarship to continue his career at Charleston Southern, is one of Rodriguez’s closest friends.

“He’s one of those guys that whenever you get around, you can’t help but smile and laugh. He does some of the funniest things,” Walker said. “But he’s been through it. I can’t imagine the stuff that he’s been through.”

Walker pointed out that along with Rodriguez’s positive outlook, he also embraces working hard to achieve his goals.

“It’s been interesting watching him from the time he was just a freshman coming in to now, and I don’t think any of us could’ve imagined where he is now— he’s an animal. He wants something, he gets it,” Walker said.

Despite it all, Rodriguez refuses to hang his head. He knows his mom wouldn’t have wanted that.