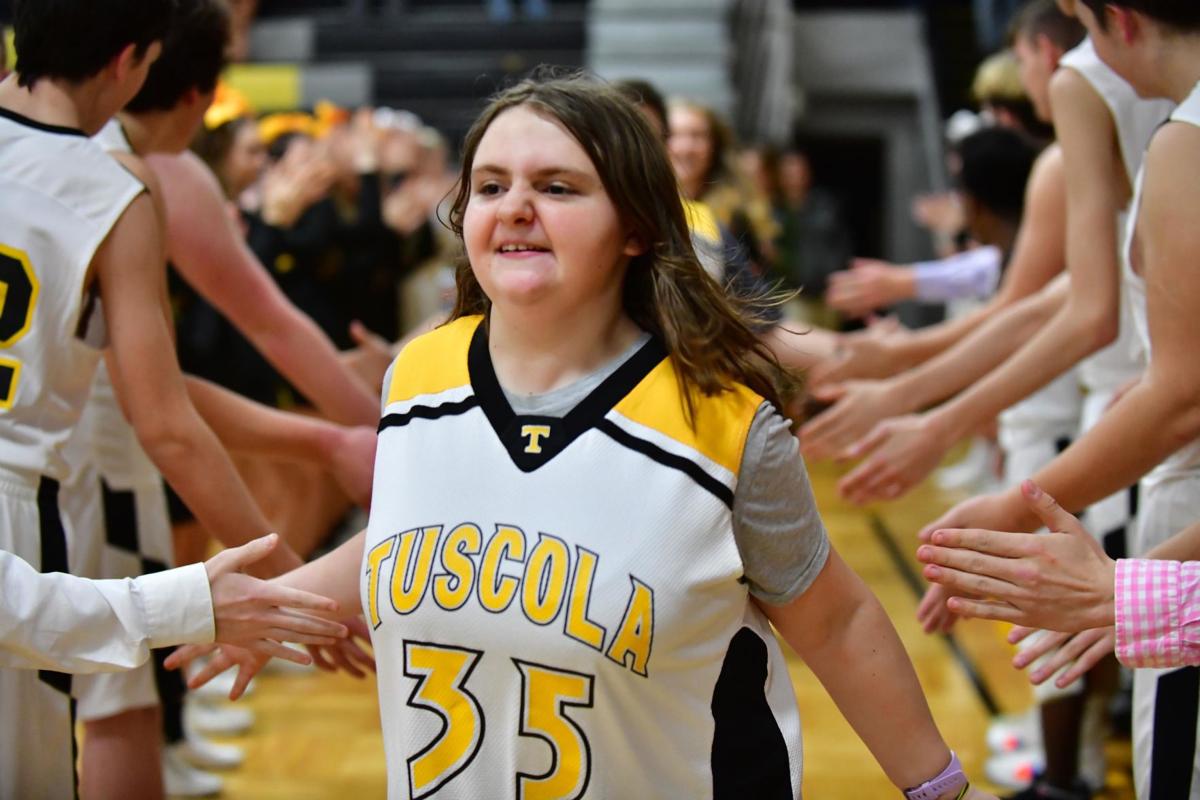 UNIFIED — Tuscola Unified Sports athlete Robin Ledford takes the court for a basketball game, cheered on by players from the boys varsity team. 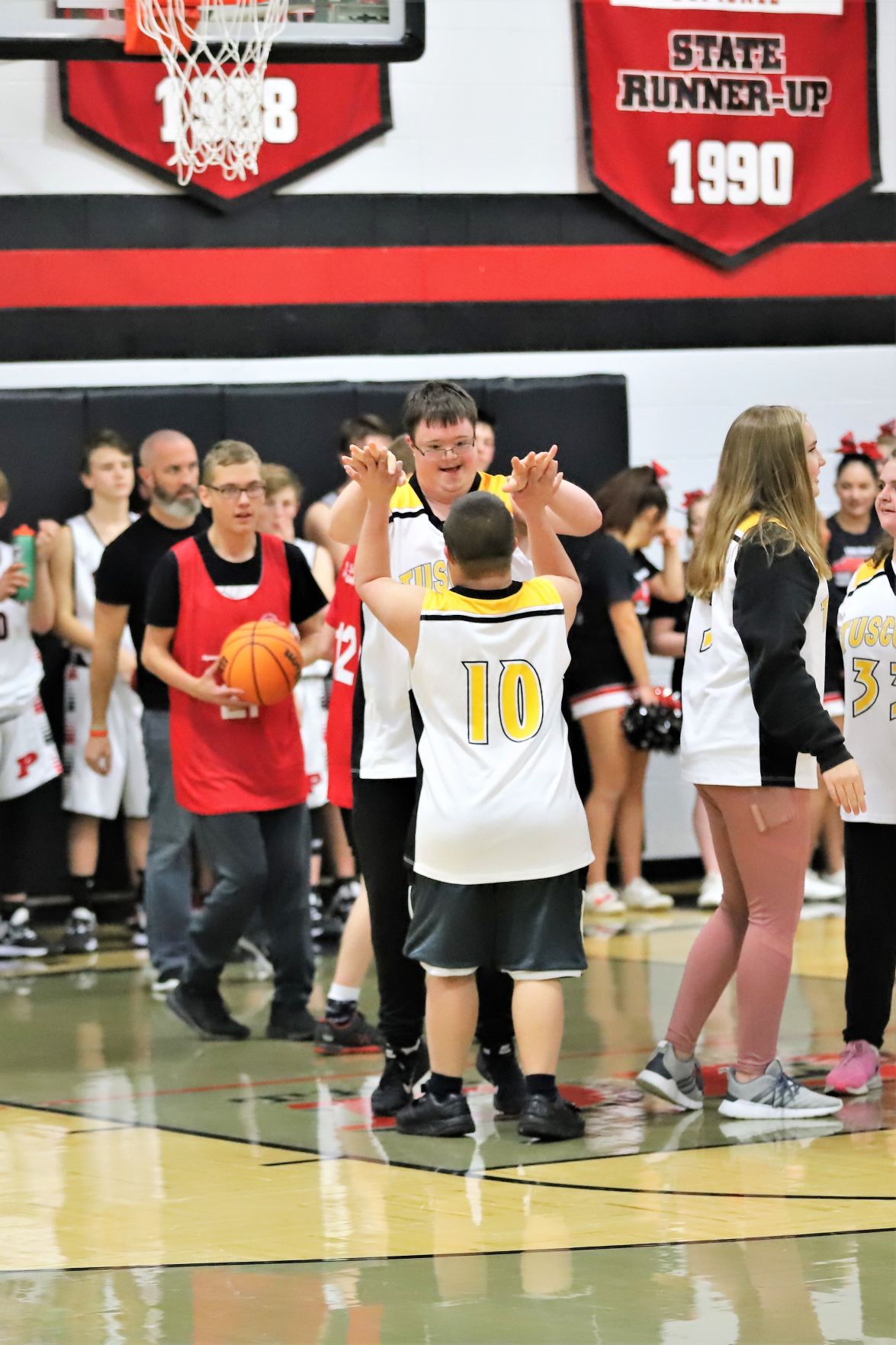 UNIFIED — Pisgah and Tuscola held a Unified basketball game for students with special needs before a varsity game at Pisgah. 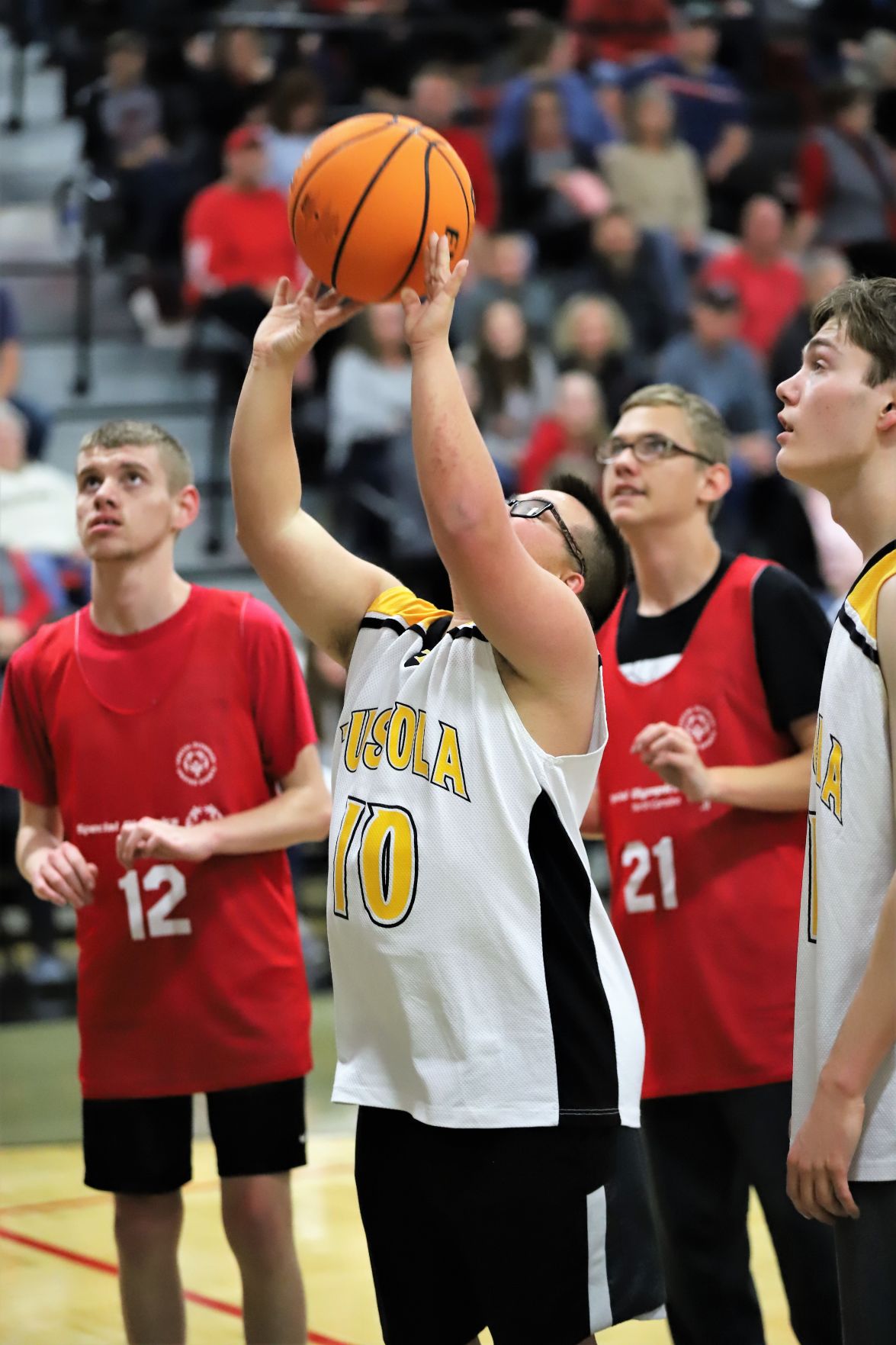 SHOT — Alex Gross and Slade Coyne look on as Chris Amsler sinks a shot during a Unified Basketball Game between Tuscola and Pisgah. 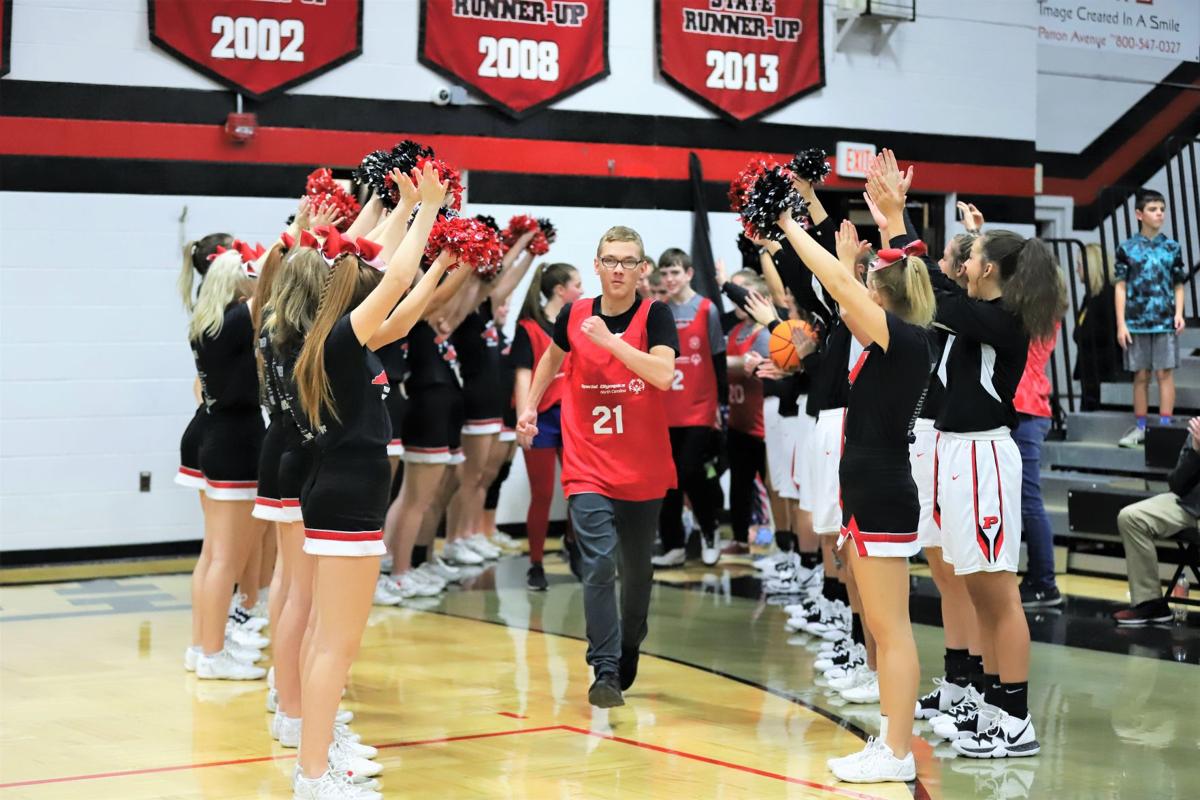 CHEER — Pisgah Unified Sports Athlete Slade Coyne is introduced and cheered on by Pisgah cheerleaders and basketball players before the Unified basketball game against Tuscola. 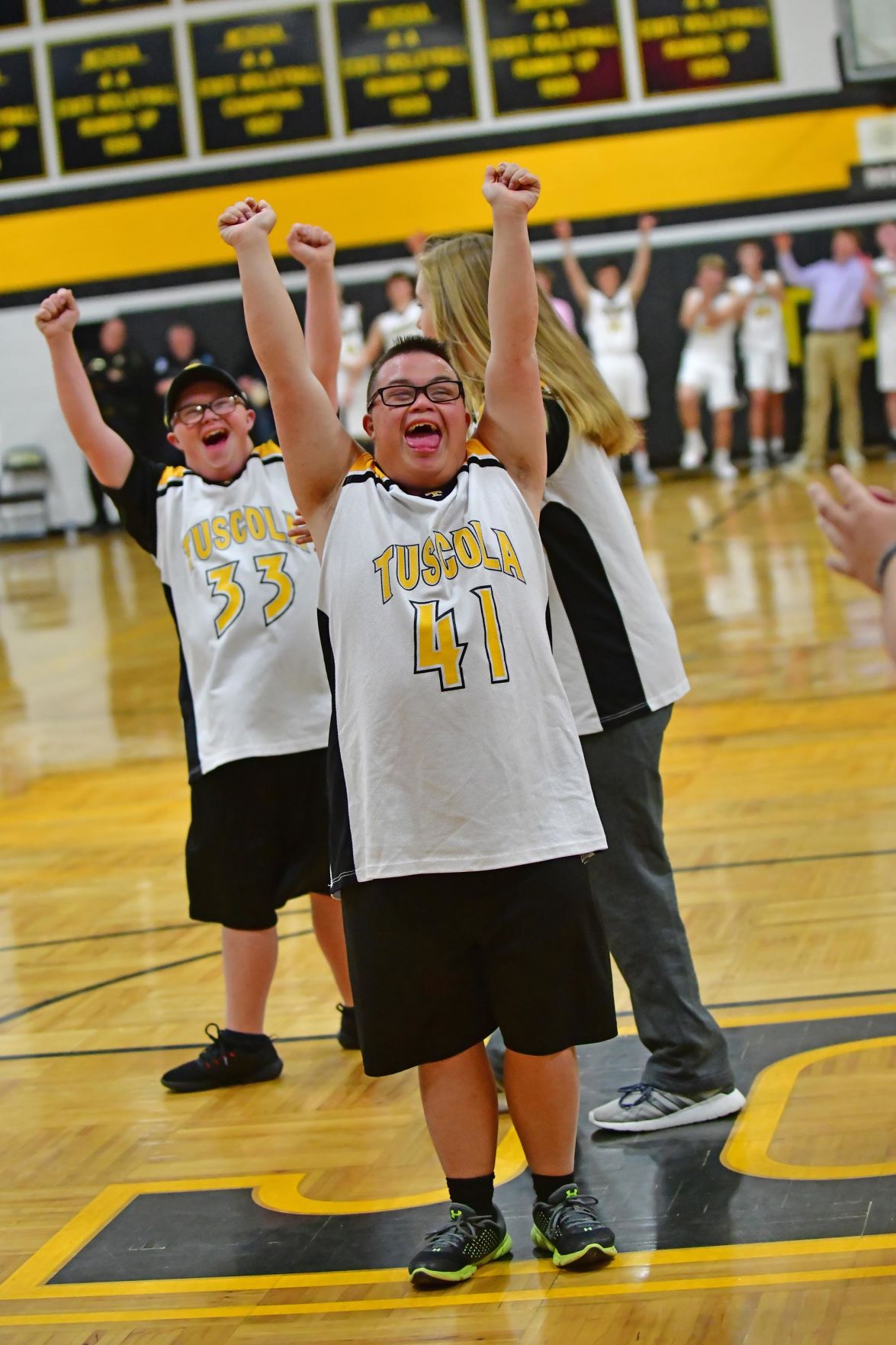 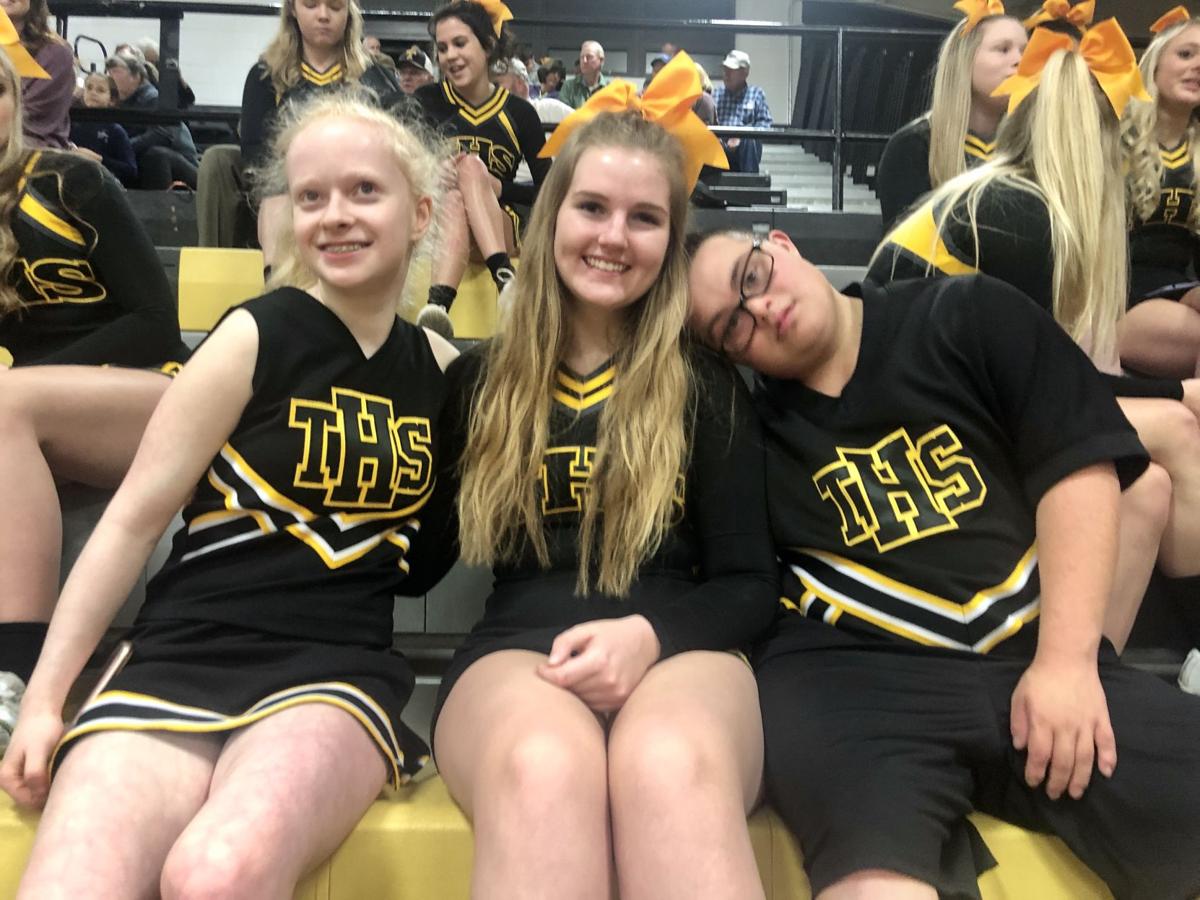 UNIFIED — Tuscola Unified Sports athlete Robin Ledford takes the court for a basketball game, cheered on by players from the boys varsity team.

UNIFIED — Pisgah and Tuscola held a Unified basketball game for students with special needs before a varsity game at Pisgah.

SHOT — Alex Gross and Slade Coyne look on as Chris Amsler sinks a shot during a Unified Basketball Game between Tuscola and Pisgah.

CHEER — Pisgah Unified Sports Athlete Slade Coyne is introduced and cheered on by Pisgah cheerleaders and basketball players before the Unified basketball game against Tuscola.

Seeing the basketball fall through the hoop. Breaking the plane for a touchdown with the football. The feeling of elation, pure joy. Hearing the crowd cheer for what you just did.

It’s a feeling that Haywood County’s student athletes know well. And, thanks to the schools’ Unified Sports Programs, it’s a feeling students with special needs have gotten to know too.

Unified Sports is offered at Tuscola and Pisgah high schools, as well as Waynesville Middle School. Among the programs offered are flag football, basketball and cheerleading. It offers the county’s special olympic athletes and students with special needs a chance to get the team sport experience they wouldn’t otherwise receive.

“It’s huge,” said Dawn Jones, the Unified Sports coordinator at Tuscola. “It opens up doors that would never be able to be open before. It’s just something that they would never get to be a part of. To them, it’s so much of a bigger deal than it would be to you or I, or the general population of students.”

The local Unified Sports teams compete against each other, and also hold events where athletes from the schools’ teams work with the students.

It provides an opportunity for the students from the general population and special needs classes to work together and learn about each others’ perspectives.

“All these kids are going to live in the same community,” said Casey Roberts, the Unified coordinator at Waynesville Middle School alongside Casey Hooper and Jennifer Parton. “They’re going to grow up together, they’ve been together. These students are just like them. It might take them a few more tries to learn something, but not only does it benefit them, it also gives those general education students a perspective of what being a leader is, being a role model. They help my kids behave better. They enjoy it just as much as my students do. It teaches them skills they wouldn’t learn if they didn’t interact with students with disabilities.”

While the students with special needs get an immeasurable amount out of the program and working with the general population athletes, those athletes and students get a very enriching experience as well.

“It’s really, really rewarding to be in it,” said Jessica Bates, a Tuscola senior cheerleader and the Mountaineers’ student liaison for Unified. “All the kids, whether they directly say it or not, they’re so excited when we have practice or when we cheer at games or if they’re playing in a game. They’re so excited. It’s really rewarding, just the relationships that I’ve formed over the past four years working with all the different students.”

Many of the Unified Games between the schools’ teams or involving the varsity student athletes take place in between or before varsity games.

In that way, as opposed to holding the games separately on a weekend, the events get the full crowds of the varsity games, and the Unified athletes get the experience of having a full crowd cheer them on.

“I believe that just what it does for their self-esteem carries into the classroom,” said Lisa Cook, Pisgah’s Unified Coordinator. “Just for them to believe in themselves and they can accomplish a goal, be a team player, that people feel they’re important is as important as anything that I could teach them in the classroom.”

For the varsity athletes that participate in the games with the Unified Athletes, to see the sheer joy they experience at making a basket and hearing the crowd cheer them on, is a memorable experience.

“It just gives you this overwhelming joy,” said Tuscola girls basketball player Gracie “John” Glance. “You couldn’t help but smile and be happy.”

While anytime two schools from Haywood County get together, there’s a fierce rivalry, that’s set aside for the Unified Games, as the county is united in support of these members of the community.

“The competition is not a big deal as far as just the joy they have in seeing each other,” Cook said. “They cheer each other on, which is such a positive thing. They might look at it as a competition, but it’s more interaction in just being out there and having people cheer for them, having people support them. The amount of support that our schools give our athletes is overwhelming sometimes when you get there and see how many people just genuinely care about our kids.”