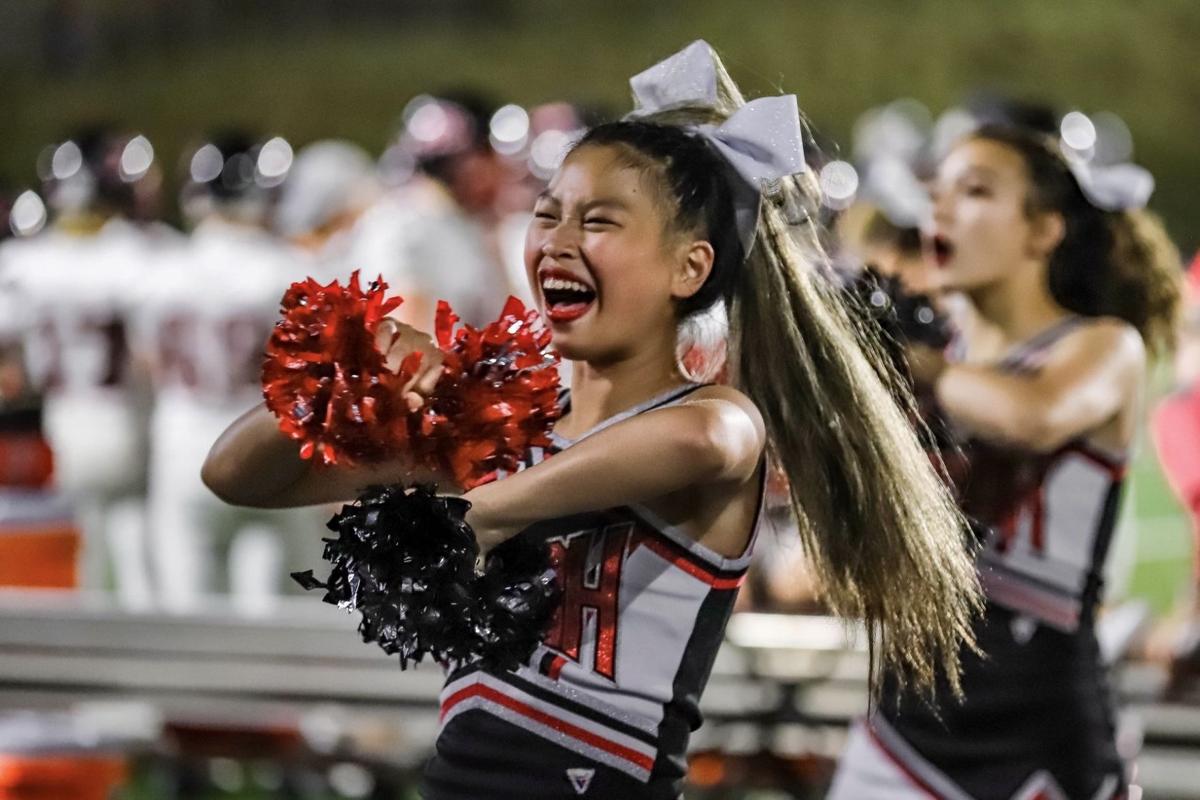 LACIE — Pisgah JV cheerleader Lacie Fisher cheers at a football game. Fisher passed away Monday due to complications from a flu-like illness. 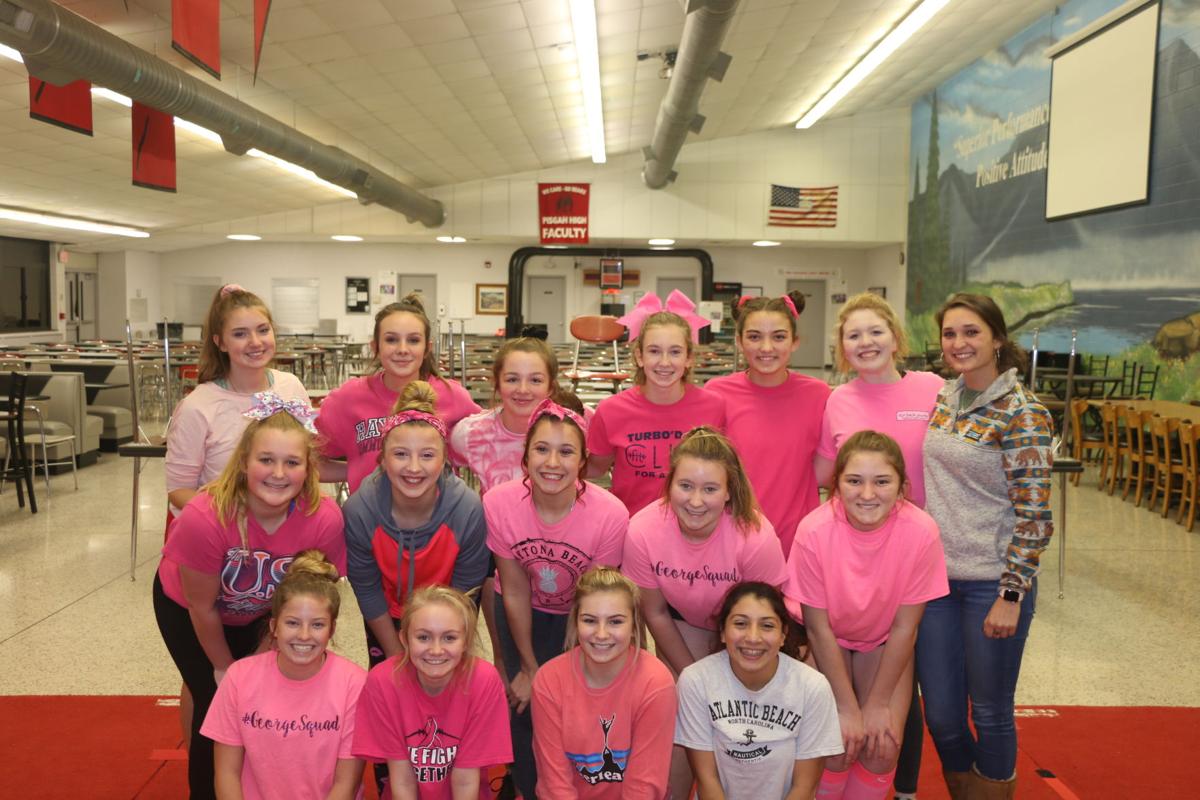 TEAMMATES — The Pisgah JV cheer team wore pink at Thursday’s practice to honor Lacie Fisher, who passed away Monday due to complications from a flu-like illness. Pink was Fisher’s favorite color.

LACIE — Pisgah JV cheerleader Lacie Fisher cheers at a football game. Fisher passed away Monday due to complications from a flu-like illness.

TEAMMATES — The Pisgah JV cheer team wore pink at Thursday’s practice to honor Lacie Fisher, who passed away Monday due to complications from a flu-like illness. Pink was Fisher’s favorite color.

Lacie Fisher always had a smile on her face. From speaking to her coach and teammates, it’s clear the 15-year-old Pisgah JV cheerleader, who tragically passed away on Monday, Dec. 30, 2019; due to complications from flu-like symptoms, was the kind of person who strived to make the life of anyone she came into contact with better.

No matter what kind of day it was, rain or shine, good or bad, Fisher always brought a positive attitude to everything she did, and tried to instill that positivity in others.

“Lacie was the definition of an angel,” said Sentilina Galyon, Fisher’s stunt partner. “She was a bubbly person that loved everybody. There was not a day that Lacie was not smiling. Even if she had a bad day, she would make it an amazing day at the end of the day. She would come to cheer as happy as can be.”

In addition to being a good teammate and leader for the JV cheer team, Fisher was someone the girls could always count on when they needed a friend on or off the mat.

As Fisher’s teammates were asked what they’d say to someone who’d never met her, the answers all carried a similar tune: they’d tell them about her smile, her welcomeness and friendliness and her positive attitude.

“Lacie was just the biggest ball of light that you’ve ever seen,” said Morgan Hill. “She was always smiling and happy to help anyone and just be a part of the team. She was just so happy all the time. If you were having a bad day, she would just go out of her way to make you happy. And she was always there to support and care about everyone. She was just one of the greatest people you’d ever meet.”

The girls also reflected on how Fisher would always be there to provide anything someone needed, whether that was borrowing headphones or a sweatshirt on the bus, money to get a drink, or a band-aid.

In the cheer routines, Fisher brought that same infectious happiness and positive energy that she brought everywhere else.

“She was really the life of our team,” said Pisgah JV coach Morgan Smith. “If anybody’s ever sat beside me at a game, they hear me yell ‘Smile’ a lot. It was like Lacie couldn’t be out there without smiling. At practice, she couldn’t not smile. She was just a joy to be around. We were all very blessed. I know she touched my life, I can only imagine all the other lives that she got to touch in her 15 years.”

Many of Fisher’s teammates reflected on their favorite memory of her. For some, that was the first time they met.

“The first time I ever met Lacie was in seventh grade in second block English,” said Gabby Clemons. “We were playing a classroom game and everybody got rewarded with a piece of chocolate. Lacie hated candy. So she came to me, I had never spoken to her, and was like ‘I don’t really like sweets, do you want mine?’ and I was like ‘Yeah, sure.’ We ended up talking the rest of class, and we got closer after that.”

For others, it was more examples of her always being willing to help others.

“In history, she’d always offer me gum and color code her notes or take my notes if I left the room,” said Cadence Rollins. “I always thought that was really sweet because she didn’t really have to do any of that, she just wanted to. I loved how she always wanted to push the people around her to be better, not because she was being mean but because she knew they could be better. She could see that. She saw the good in everybody.”

And more still reflected on examples of that enthusiasm and energy Fisher brought to everything she did.

“We were at a cheerleading competition and we had already gone, and we were waiting on the varsity girls to go on,” Smith said. “In between each team, they would play music. And it did not matter what song was playing, Lacie was dancing like nobody was in the room, like nobody could even see her. She was just living life and just having a blast. It was great to see. I just remember looking over and just smiling and just being touched with how much life and personality that she had.”

In addition to her friendliness and positivity, Fisher was a person who gave 110 percent to everything she did, whether that was school, other activities such as the Pisgah band, chorus, several civic organizations and especially cheerleading.

“I think that would be her legacy, to always give everything that she had,” Smith said. “She always, whether it was a game, a practice, a competition, she gave it her all. I spoke with her Dad and I know she did that with school. If she got a 97, she was pushing to get a 98 or a 99. Just to be happy. I think there’s so many parts of Lacie that will forever touch these kids. I know with these teammates, it’s really touched them.”

Fisher, who also cheered at Canton Middle School, brought that commitment to Pisgah cheer from day one.

“When Lacie tried out for the Pisgah cheerleading team she was asked what team commitment meant to her, her answer was simple,” Smith said. “‘It means to give it my all no matter what. To put the team first. To be reliable, and dependable.’ Lacie stood by that answer every practice, game and cheer competition that we had. She was constantly striving to better herself, and our team. She was the one the girls always turn to. Lacie was always there making sure everyone was smiling, and happy. She had the biggest heart.

“She was handing out sweatshirts to the ones that would get cold. She was the one that always had Band-Aids ready to go. She just couldn’t stand the thought of someone going without. She was always buying girls food at the concession stand, after the games, and even buying them gifts from the cheerleading competition when she knew their parents weren’t able to make it. Lacie was a beautiful soul, and I am beyond thankful I was given the opportunity to coach her. Words cannot describe how much the Pisgah Cheerleading Program will miss her.”

The cheerleaders wore pink, Fisher’s favorite color, at their practice Thursday, and both the varsity and JV wore it at Friday night’s basketball games. The girls will wear pink bows in Lacie’s honor for as long as they want to, Smith said.

While moving forward without Fisher won’t be easy for the team, they all know how they, and the larger community, can honor her. The hashtag #LiveLikeLacie circulated on social media in the past week, and the Bears know how Lacie lived and would want others to live.

“Lacie’s favorite quote that she used all the time was ‘Live life today because yesterday’s gone and tomorrow may never come,’” Clemons said. “She always lived in the moment, she never cared what was coming next and she didn’t talk about the past because it was gone.”

They know living like Lacie means being happy and positive in everything they do, helping others, giving everything their all and living each day like nothing is guaranteed.

“I think just keep her memory going,” Galyon said. “Remember that she wouldn’t want you to dwell on it, she would want you to keep going. It’s been pretty hard for me, just because she was a sister to me and because she was in my stunt group. I come to cheer practice wanting to see her, but then when I see that she’s not here, it hurts me. But I know that she would want me to keep honoring her and her memory, and know that she is always going to be a guardian angel with us and that she will always be close by.”