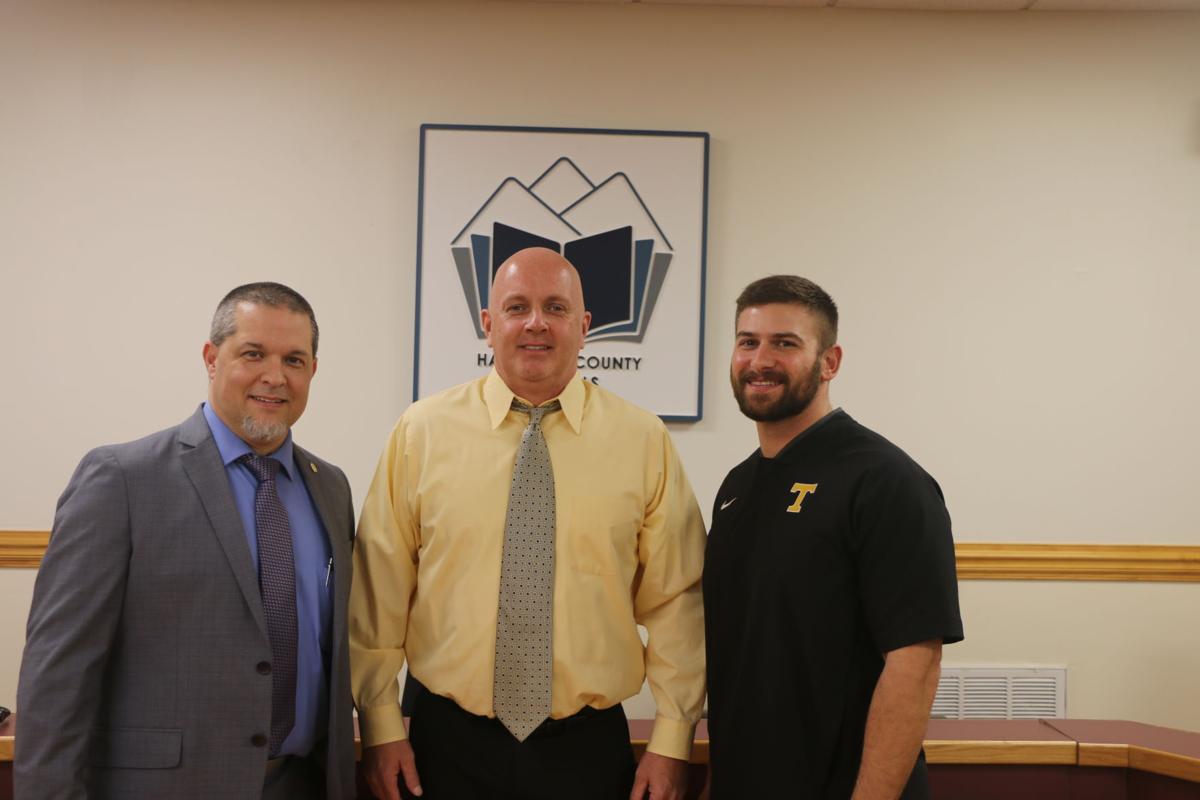 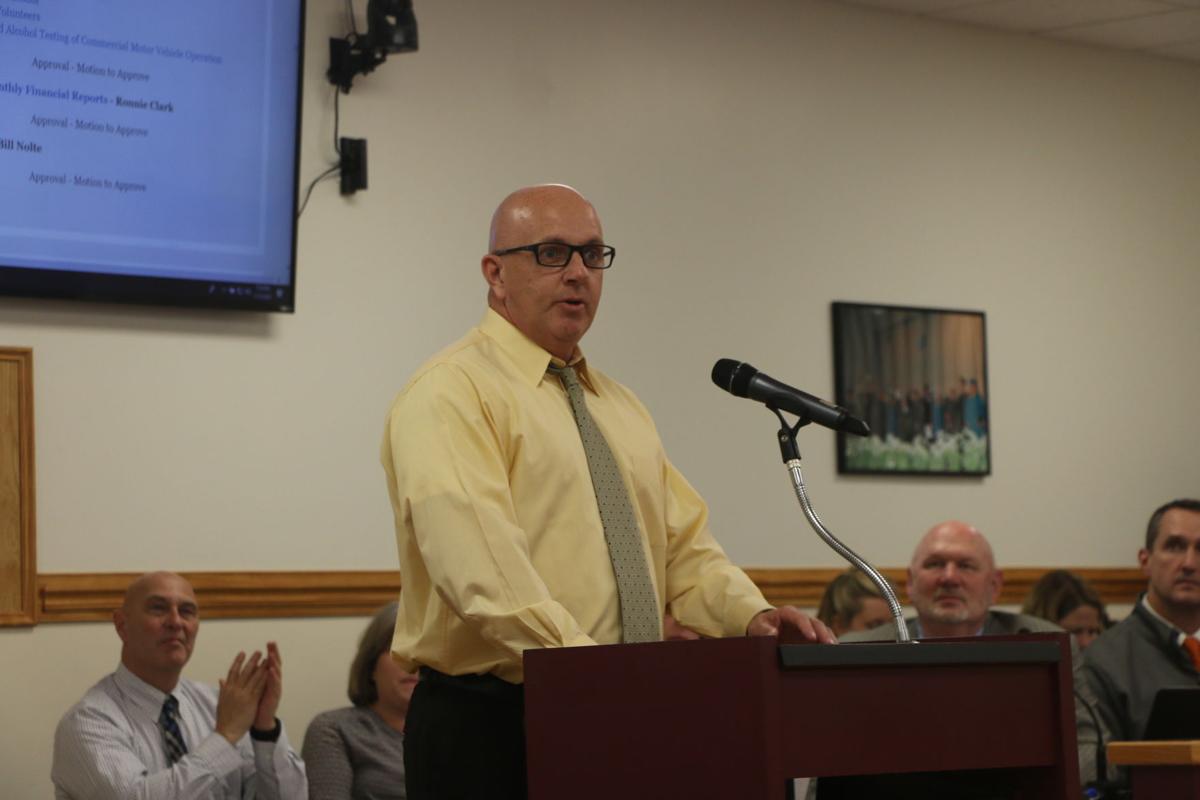 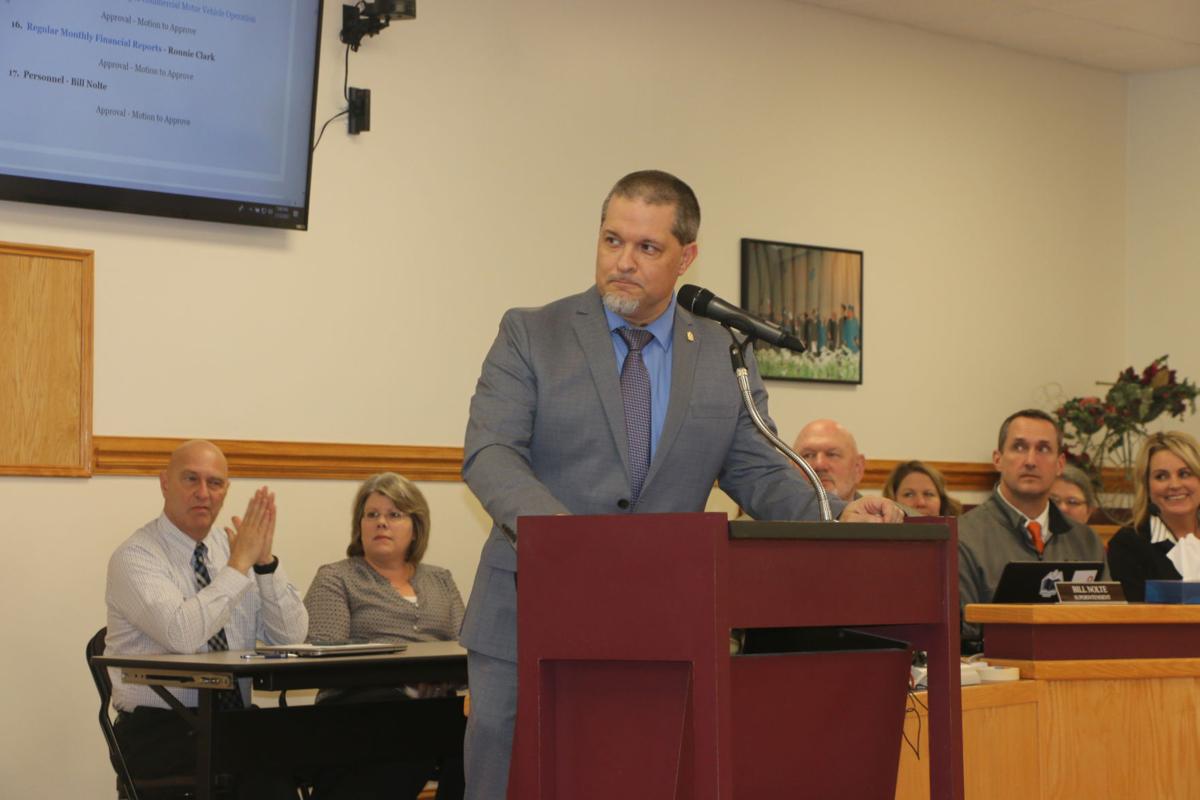 Chris Brookshire has dreamed of being in this spot for a long time. Most of his life, in fact.

“This has been a dream of mine, I can’t lie to you, ever since I was a player here,” Brookshire said. “All the way up from youth league through here, this has been a goal of mine. I knew I wanted to be a coach here. The fact that I probably had the best role models that you could probably want as a young person, from my Mom and Dad, to my brothers and sisters, and I had the best coaches in the country in Doug Brooks, Dennis Hefner, Buddy Chandler, Larry Breese and Mark Etheridge. We were really blessed. I had a good backing.”

Brookshire, who spent the last year as the wide receivers coach at Western Carolina University (he graduated as a Catamount in 1993), was in the middle of official visits when he first got the call about the Tuscola job opening.

He applied for the job, interviewed and was told he was in the final two. He was then called back in for a meeting to say the job was his if he wanted it. The decision was an easy one. Brookshire, who’s had other offers in the past, told his friends that there was only one job for which he would leave his position at Western: Tuscola.

“I had already made up my mind that I was 100 percent going to take this job,” Brookshire said. “I really believe in prayer. I’d been prayed up about this. I felt really good about it.”

For Tuscola, knowing that they had the right man for the job was also not a difficult decision.

“What made this decision for us was the fact that we could not hope to find someone that loved this community, loved this school and loved our kids more than Chris Brookshire,” said Tuscola Principal Todd Trantham. “He absolutely will be the most passionate person when it comes to making our football program successful that we would be able to find.”

Brookshire arrives back in Waynesville with multiple seasons of high school experience in the Mountains. He took over an Erwin team that was coming off back-to-back 0-10 seasons, and spent four years turning the program around.

“That was a great learning experience in my life from every phase of the game,” Brookshire said.

Brookshire also spent two years at nearby Smoky Mountain in 2016 and 17. In 2016, he guided the Mustangs to their first winning season since 1999, and set multiple school records on offense during his tenure.

In Sylva, Brookshire had the honor of coaching at the alma mater of his legendary coach, and that experience should benefit him greatly at Tuscola.

“Being the head coach at Smoky Mountain was one of the biggest honors of my life,” Brookshire said. “Coach Brooks, the former head coach here, my coach, that’s where he graduated from. … I know the groundwork. I know the lay of the land. “I know what we’ve got here at Tuscola. Our kids, after our meeting this morning, they’re hungry, fired up and ready to go. That makes me feel excited, a little more rejuvenated about the process. I’m excited. That’s all I can keep saying.”

After spending the last two seasons as an offensive position coach at two colleges (Brookshire was the fullbacks and tight ends coach at Mars Hill before returning to Western), Brookshire knows what area of the game his strengths lie in: offense.

He knows what goes into building an offense, and has an idea of the style he wants to play, but also knows it’s important to adapt to the personnel he has to make a winning formula.

“I think my strength is on offense,” Brookshire said. “And that’s something that I’ve had to really learn. As coaches, you take stuff from everybody. You learn from everybody. You see what works, see what doesn’t. Being a young head coach when I was at Erwin, we had a trial and error and learned how to do things the right way and the wrong way. Sometimes that happens, but I think here at Tuscola, offensively, we’re going to be similar to what we were at Smoky Mountain, personnel wise.

“You don’t go into it saying we’re going to throw the ball a whole lot or run it a whole lot. You take what the defense gives you. I’d love to be a 50-50 run and throw kind of team. But at the end of the day, if we’ve got to run the ball 50 times a game to win, that’s what we’re going to do. That’s the most important thing is making sure we take care of our business, do things the right way and win. Don’t make any mistake about it, everybody loves winners.”

In addition to installing his offense, Brookshire will look at adding to his staff.

He doesn’t quite know what the makeup of the coaching staff will look like yet, but he does know it will involve more coaches, not fewer.

“There’s always attrition rate with staff anytime there’s turnover,” Brookshire said. “Here at Tuscola, they’ve been really blessed with some coaches that have been here awhile and there’s some things that we’ll have to work out through contract wise just with some meetings and some interviews. But we know we’re going to be adding. We’re not going to be subtracting less. We’re going to have more coaches than they’ve had in a few years here overall. The key for me there again is bringing in people that love kids, that are going to work hard and love football. If you don’t want to be a Mountaineer, this is not the place for you to be. As an adult or a kid.”

Brookshire’s first priority, however; is building relationships with his players. He wants them to know what kind of coach he is, and that he has an open-door policy. His players can come to him with any issue, on or off the field.

“My job here, to start with, and even middle of the season, end of the season, whatever, is to make sure that our seniors graduate, make sure they have an opportunity to go to college, make sure they have an opportunity to be the best people they can be,” Brookshire said. “I’m an extension of their family. So I definitely am going to be a part of their lives for the rest of their life. I want it to be positive. It’s important for me that these players walk out of here with their chins up. The players, without a doubt are the most important thing to me.”

Having grown up in Waynesville, Brookshire understands the importance of Tuscola football to the community. He knows that Haywood County is a tight-knit place, and wants his team to play an active role in bettering the community from day one.

Brookshire is also someone who understands one of the most important tasks he’ll face: ending the Mountaineers’ seven-year losing streak to rival Pisgah in the county clash.

He knows that’s the biggest high school game of most of these players’ careers, a big deal for people all over the country from the area, and perhaps the most important night of the year in Haywood County.

“I don’t want anybody to ever undervalue the fact that the Tuscola-Pisgah rivalry is the best rivalry in the world,” Brookshire said. “I can promise you, when we line up, we want to do everything in our power to win that game and do it the right way, just like they feel towards us. I know the past seven years, there’s been a run by Pisgah. And I’ll be honest with you, they are a well-coached team, they play hard, they do things the right way. From this moment going forward, these Tuscola teams are going to play hard, they’re going to do things the right way. Our plan is to reverse those fortunes.”

The coming days, weeks and months figure to be busy for Brookshire, from installing offseason strength and conditioning programs, to getting to know his staff and players, to connecting all levels of football and Waynesville from Tuscola’s varsity squad to the youth leagues.

One thing that’s certain: Chris Brookshire is right where he wants to be, doing his dream job. And when he sets foot on Doug Brooks Field at C.E. Weatherby Stadium, the field named for his legendary coach and mentor, for the first time as the Mountaineers head coach?

“When you say that, the way you just said it, that’s the first time I got cold chills during this whole process,” Brookshire said. “I think I’m speaking of extension for everybody that’s ever played here, that’s been a part of this program, he meant so much to us. We wouldn’t be in the positions we’re in without coach Brooks. We all know he loved us. Boy, he loved us. He was so hard on us in a good way. He pushed us to do things he knew that we could do. I want to be that same type of mentor for our young people here. But that first opportunity to walk out on that field, when the bullets start flying, and it’s all real, it’s going to be very special, and I’m sure there’ll be some teary eyes around. He’s very important to not just me but to a whole bunch of people. I’m honored to be able to do that.”

Steven M. Sipple: Would Frost ever give up play-calling? It's a question worth pondering

Discipline, respect and 400-meter repeats: Why a former pupil says Lubick and Frost are 'a perfect fit'

Packers notes: Despite loss, 2019 was ‘special’ season for Aaron Rodgers ‘because it became fun again’