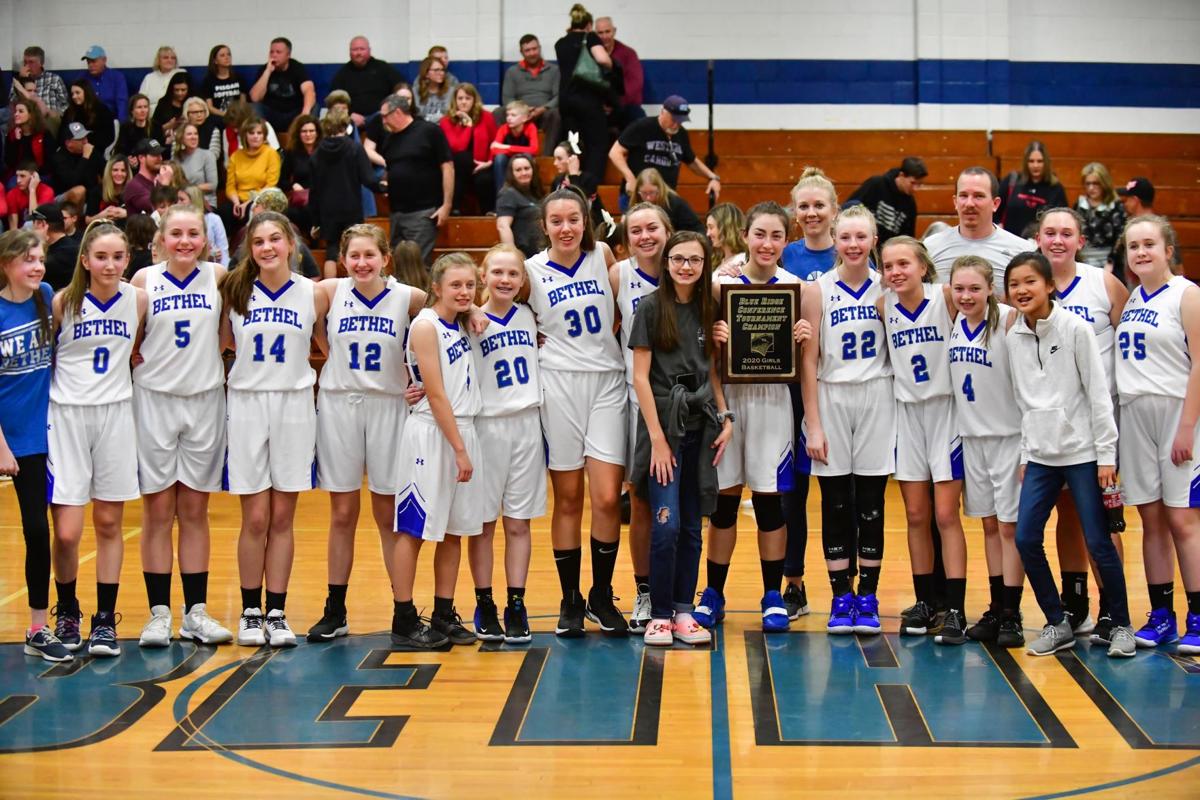 CHAMPIONS — Bethel girls basketball capped a 15-0 season with a 37-32 win over Canton in the Blue Ridge Conference Championship Game Monday. 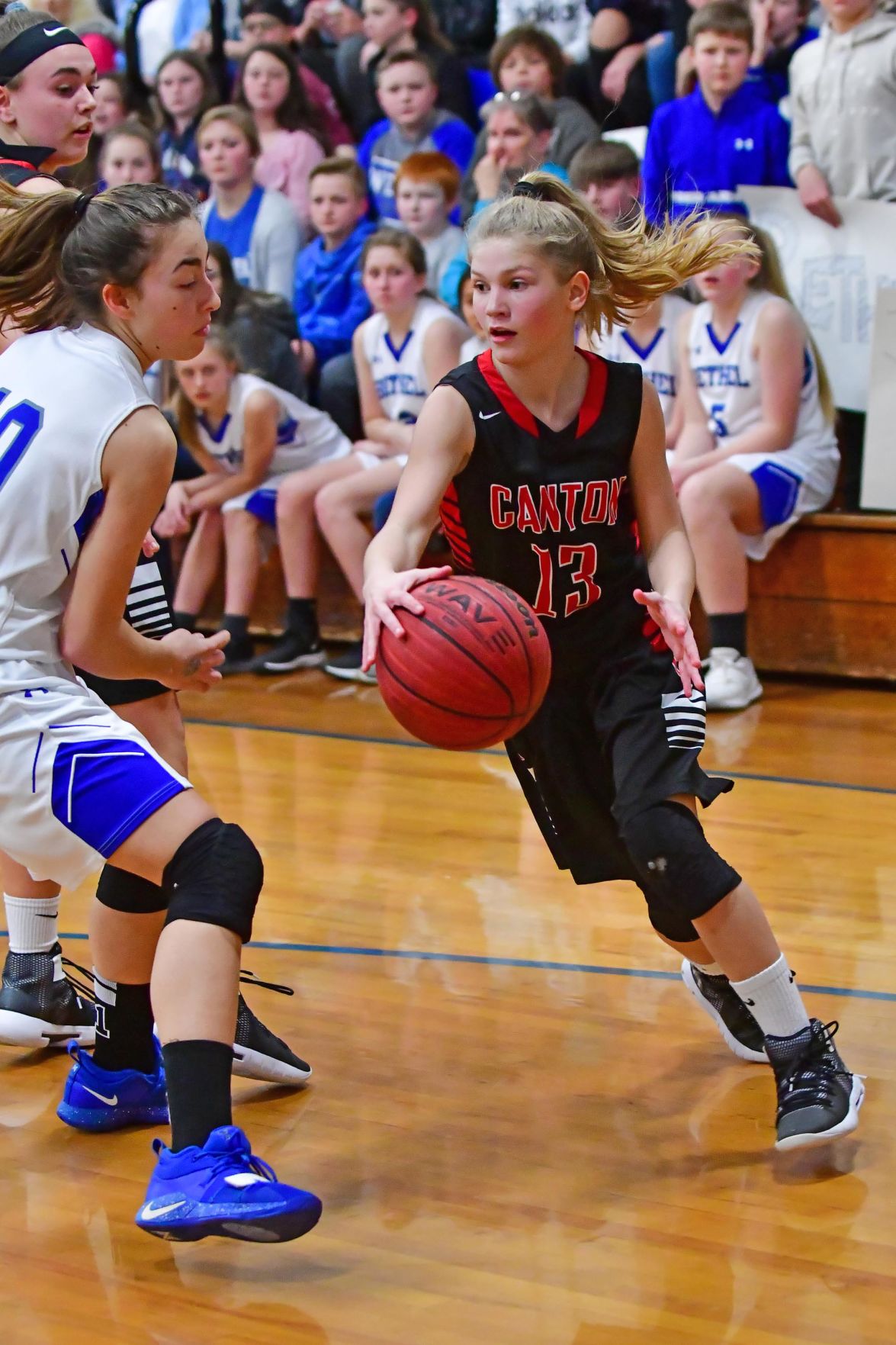 DRIBBLE — Canton’s Bailey Conner drives into the lane against Bethel. 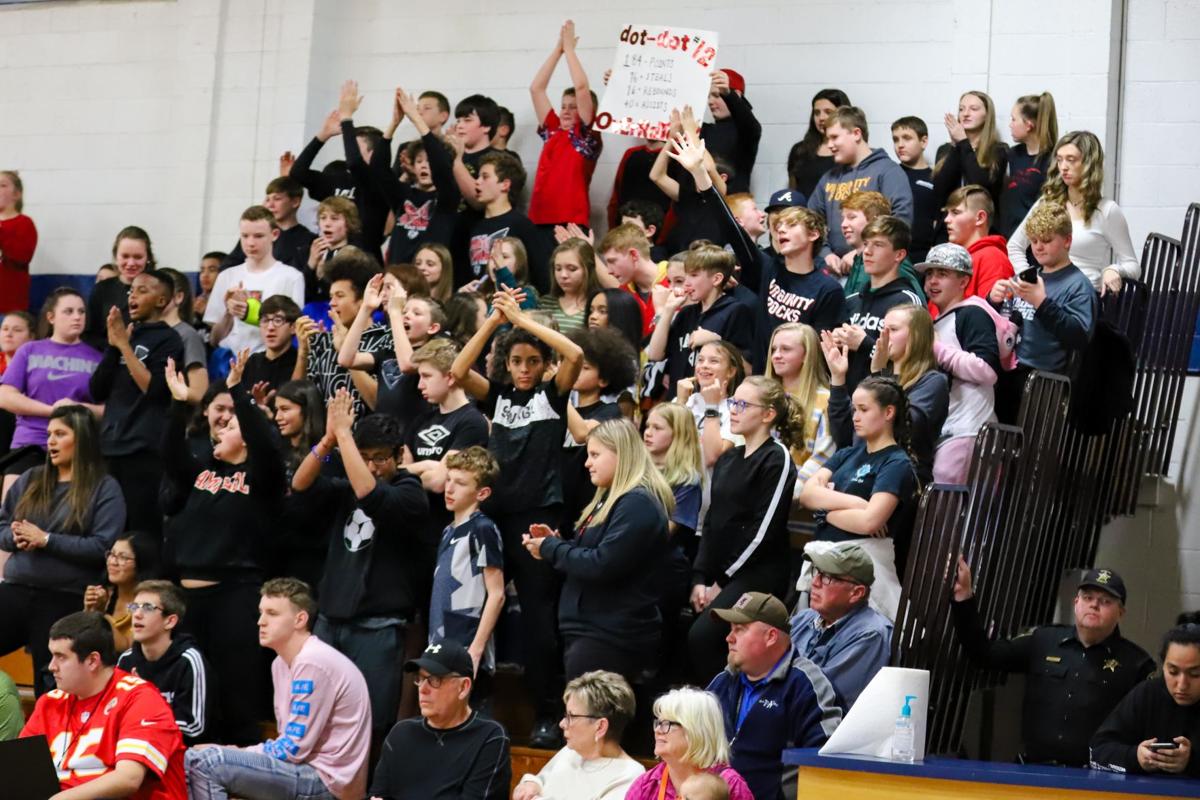 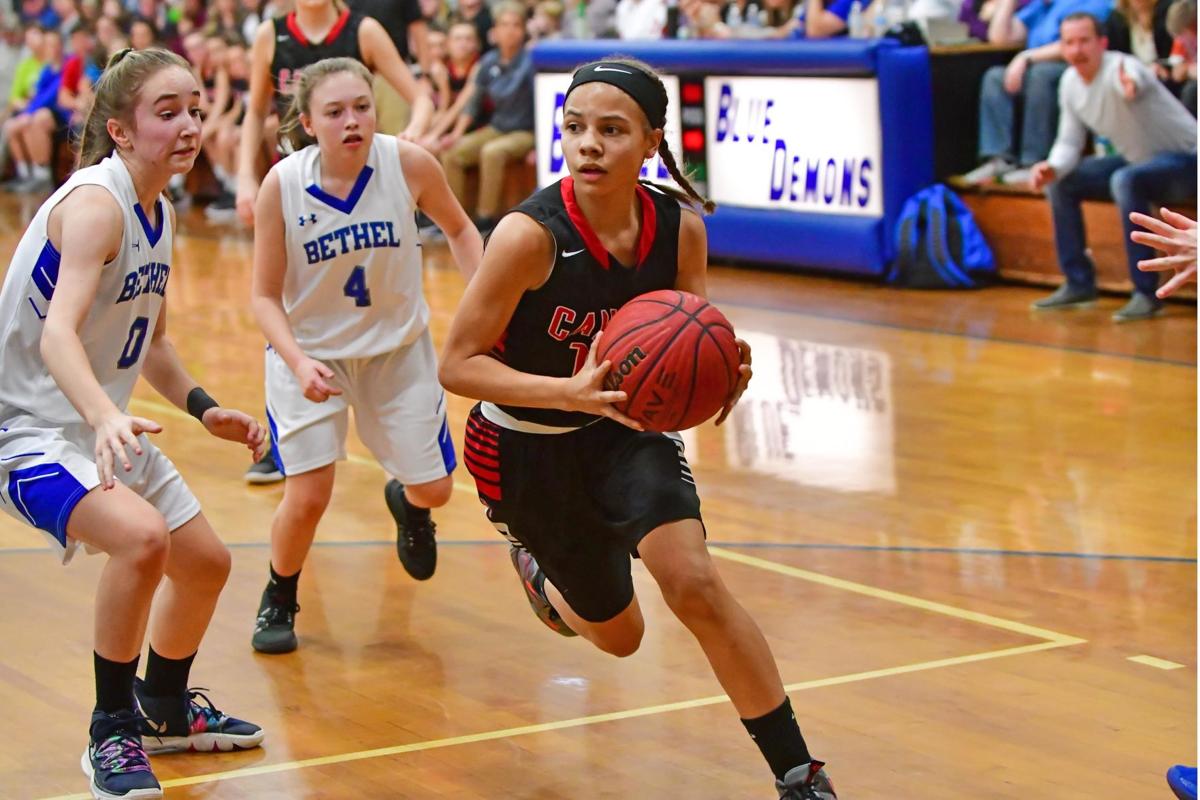 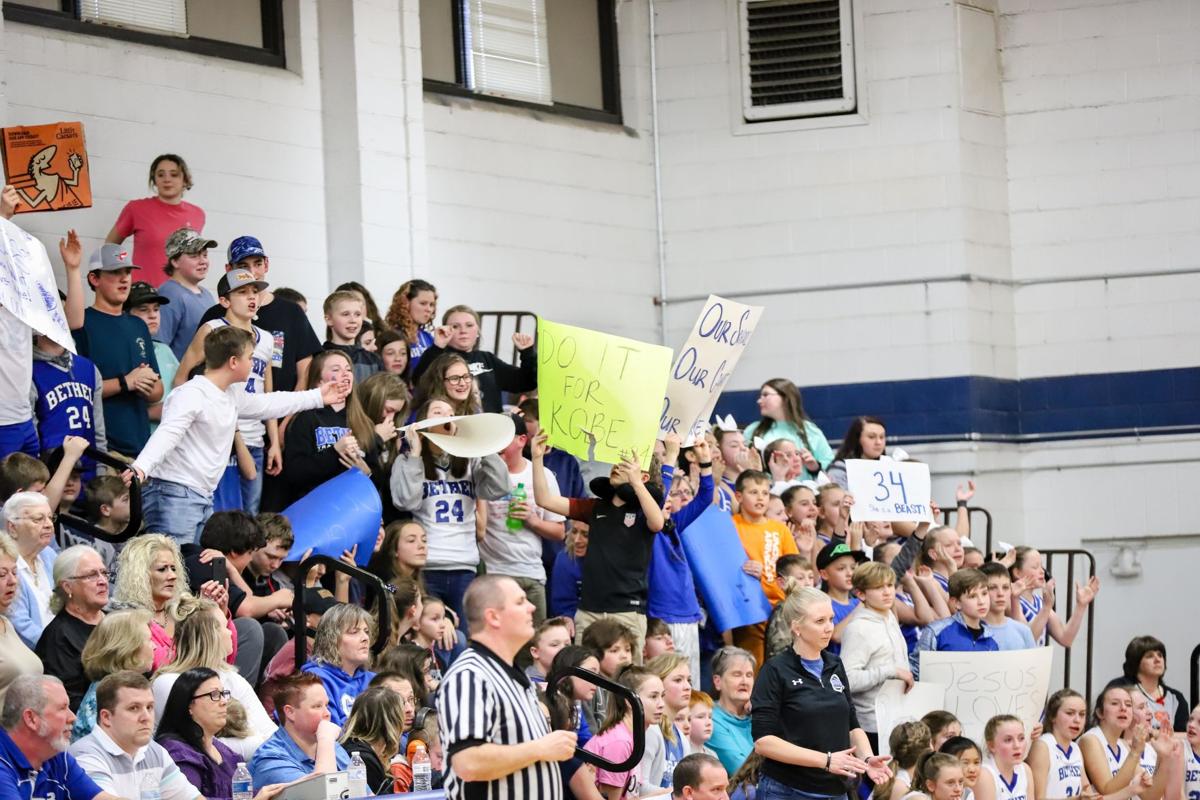 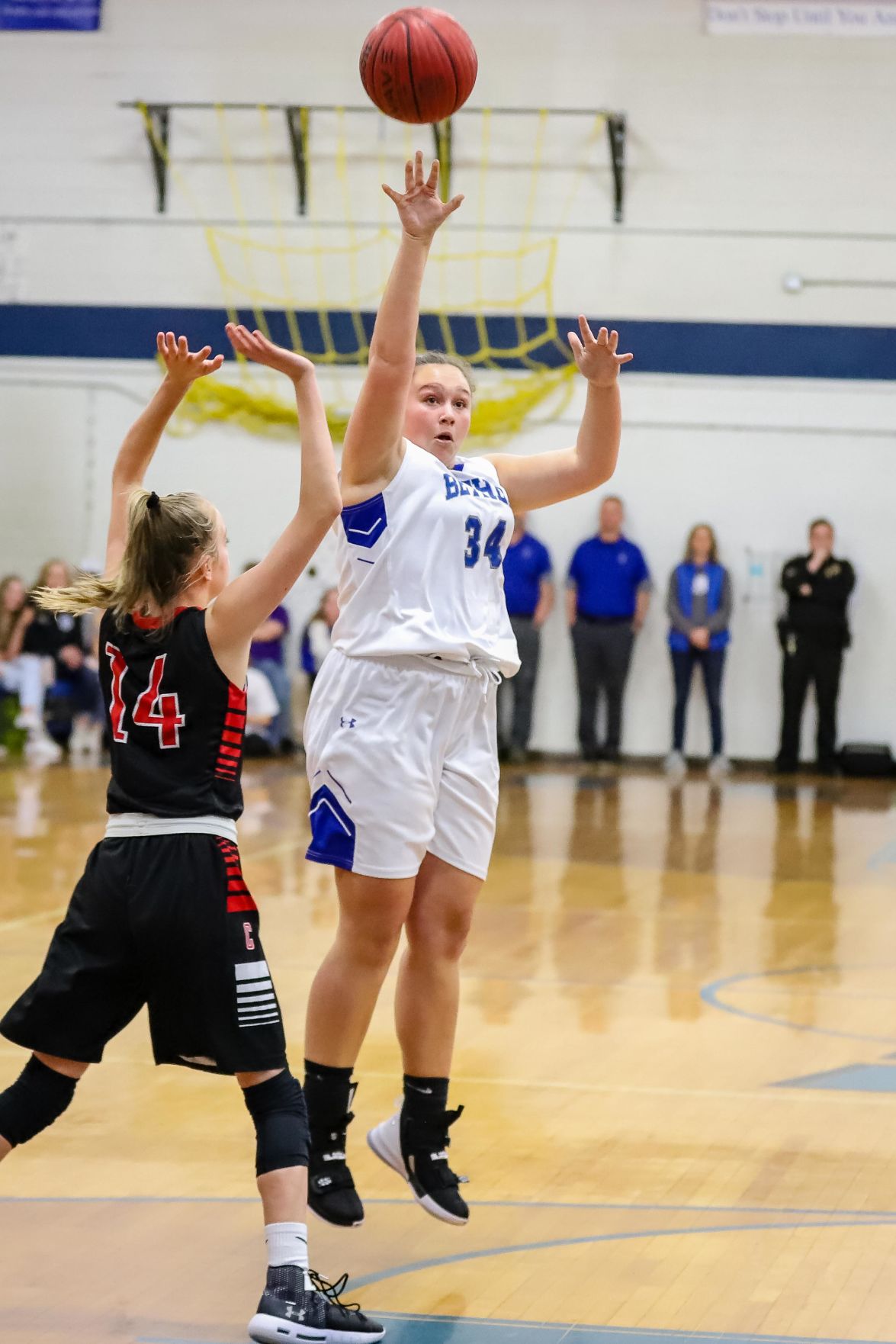 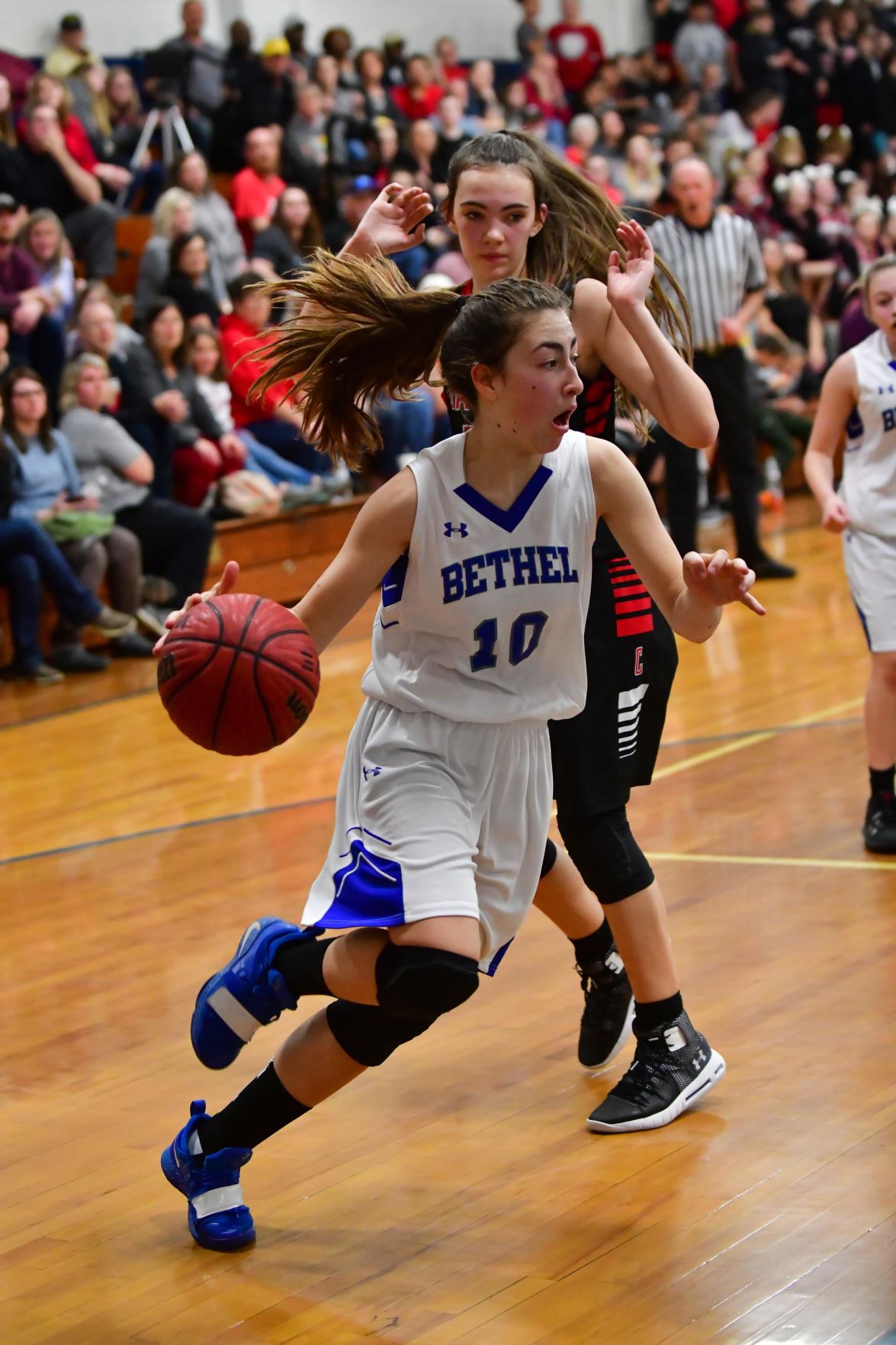 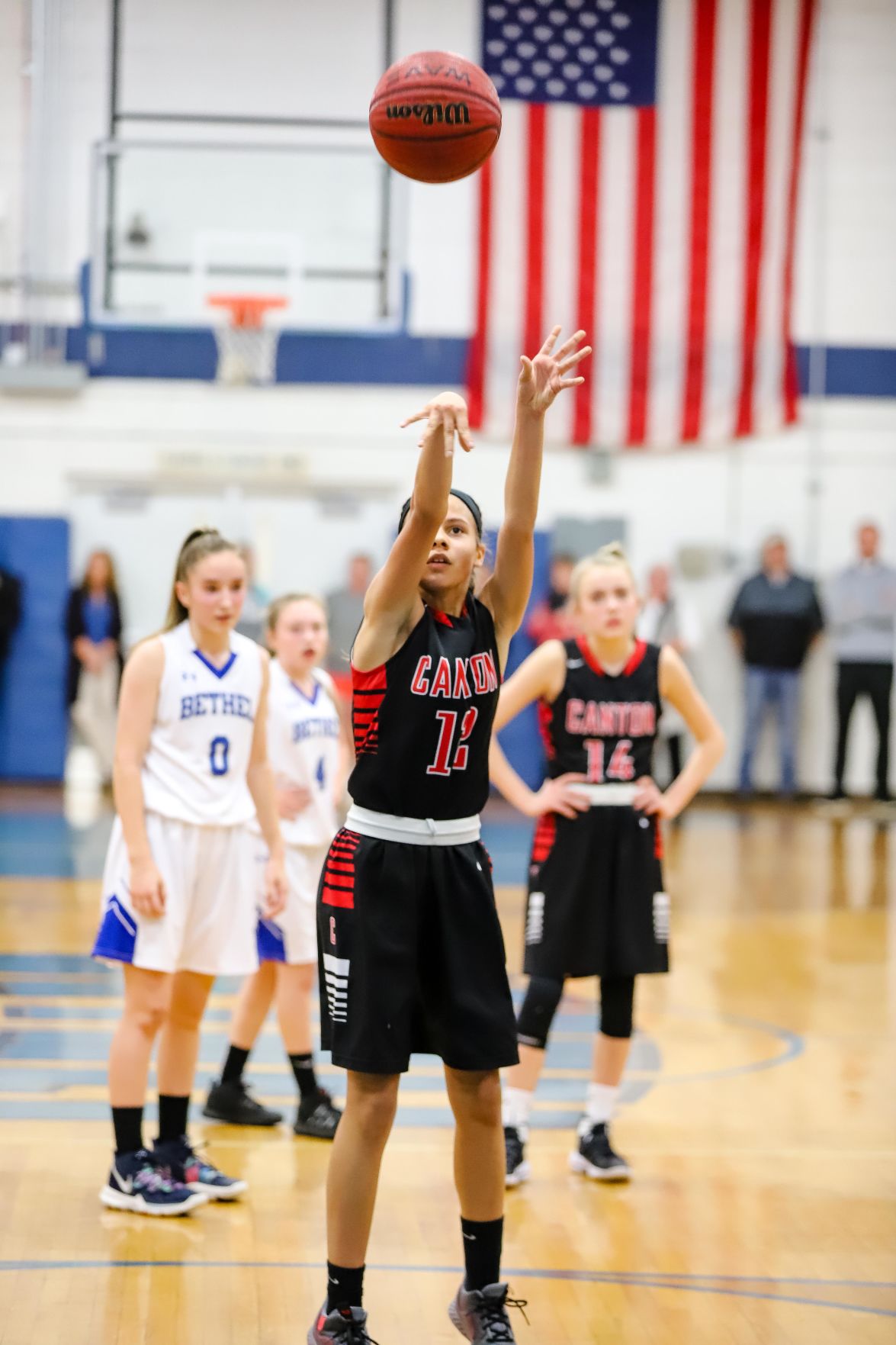 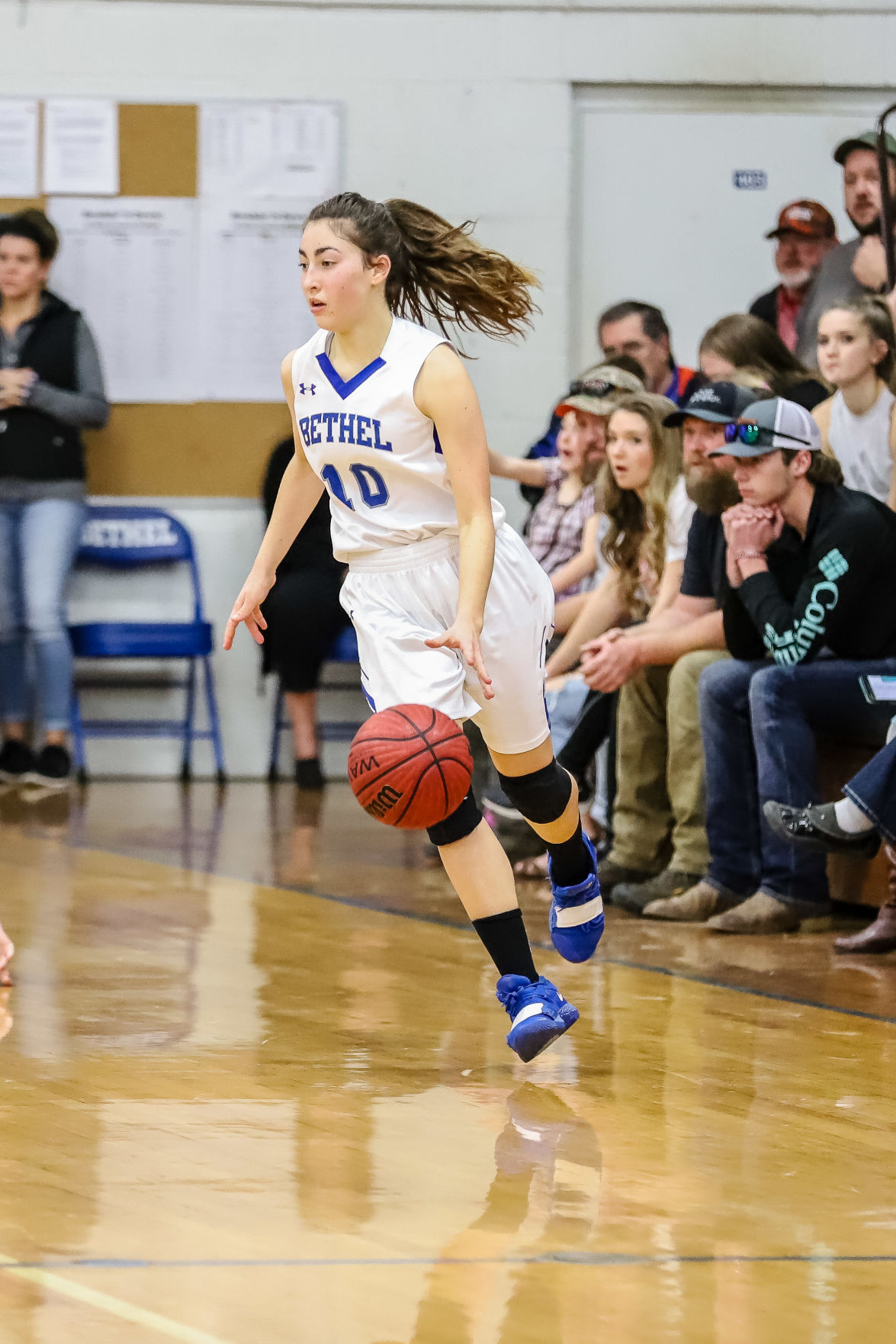 CHAMPIONS — Bethel girls basketball capped a 15-0 season with a 37-32 win over Canton in the Blue Ridge Conference Championship Game Monday.

DRIBBLE — Canton’s Bailey Conner drives into the lane against Bethel.

Cars filling the parking lot and parked up and down the street. A raucous, dueling crowd. Standing room only. One fan section or the other roaring its approval with every big play.

Any resident of Haywood County that was not at Bethel Middle School Monday night might assume the above description was referring to a game between high school rivals Pisgah and Tuscola. It wouldn’t be a bad assumption. It would, however; be an incorrect one.

“It’s absolutely amazing,” said Bethel head coach Julie Green. “Where I grew up, we didn’t have a close-knit rivalry like this. To walk out into the gym right before the game and just see the support, it’s incredible. It speaks to the people here, especially those who are natives who have supported Canton and Bethel for many, many years, that they would continue to come back and support these kids. I know it meant the world to the girls on both teams. It was an exciting atmosphere, something that I will never forget.”

That’s to say nothing of the game on the court, an intense, back-and-forth slugfest that went down to the wire. Canton led for most of the way, including by five going into the third quarter and by three with under three minutes to play, but, as they’ve done all season, the Bethel girls fought back, finishing the game on an 8-3 run to close out a 37-32 win and undefeated season.

“I think resilience has kind of been our word of the season,” Green said. “They will never go down without a fight. I really look forward to them continuing to play together and joining up with these Canton girls at Pisgah. I think the teams at Pisgah the next couple years will be a force to be reckoned with.”

Eighth grader Whitney Boone led the Blue Demons (15-0) with 25 points, and Dot Dot Mills led the Bears (13-3) with 18. Both teams gave their all, with Bethel pulling away in the end.

“I’m just really proud,” Simmons said. “My girls fought their butts off. I told them in the locker room, we just got beat. I didn’t think we really gave it away. I thought they were just that good. Obviously we wanted it really bad.”

The first half of the contest was dead even, with the rivals heading to the locker room tied at 14.

“I’m so blessed to have all my teammates,” said Bethel eighth grader Karlie Robinson. “When we were tied at halftime, they were picking me up because I was very upset with myself and they’re just a pleasure to be with.”

After Bethel cut the game back to within three points with a pair of foul shots with about three and a half minutes left, Aven Thompson hit a mid-range jumper to make it a one-point game at 27-26 with under three minutes left.

Mills sunk two from the charity stripe to put the Bears back up by three, but Boone then drilled a deep tre to tie the game at 29 with about two and a half minutes to play. Boone then went 1 of 2 from the line to give Bethel its first lead since the first quarter with 1:51 left.

“I’m just very proud of my kids,” Simmons said. “We ask them to handle adversity. I thought it was a really tough environment. I thought they kept their cool. They’re championship people. We talked a lot all year about just being coffee beans and when the water gets hot, impacting the water and making it better. And I thought we did that. I was just so proud of the way our kids handled themselves in a tough environment. That’s the biggest key for me. All these kids have a bright future going to Pisgah and it will be fun for them.”

After a charge was called against the Bears with 1:30 to play, Boone hit a reverse layup to put the Blue Demons up 32-29 with just over a minute to play. Following a Canton turnover, the Bears sent Boone to the line, and she hit one shot to make it a four-point game with about 47 seconds left.

After the game, eighth graders took the time to reflect on their time playing middle school basketball.

“Since we’re so small, everyone knows each other,” Boone said. “One good thing can turn into the whole school tomorrow will be around patting us on the back. They’ll all know our names just from one game. They come here to support us, even though we might not even talk to them at school. … It just makes you smile when you realize that someone you’ve never talked to saw you do something good on the floor or saw you pick someone up.”

As Bethel principal Shawn Parris said in her address the crowd before the game, many of the basketball players and cheerleaders for both schools will go onto be teammates at Pisgah, which both Canton and Bethel feed into. Of 12 teams in the conference, two from Haywood County met in the final game (and Bethel defeated Waynesville in the semifinals).

“To me, it was a special night for our end of the county,” Parris said. “To have Bethel and Canton coming together to play for that championship game, like I said to the crowd, what a great thing for these kids, because they’re going to be playing together for the next few years in high school, and it was just a great celebration for both teams.”

To that end, Pisgah head coach Brandon Holloway and his assistants, along with several players from the Pisgah girls team, were on hand to watch the game.

Safe to say, they liked what they saw, and the future is bright.

“We’ve had a good understanding of this group since they were even smaller coming up through,” Holloway said. “Getting to watch them compete, and I think Bethel won the tournament last year. We’ve got some freshmen that were on that team. It’s just a solid group to be able to see that continue and the coaches on both middle schools do an outstanding job of getting their kids ready. One of our greatest benefits is having two middle schools that feed into us. You get twice the participation with these girls playing.”

This won’t be the last intense, high-energy, crowded rivalry game these girls will play in either. They’ll go into their first such experiences at the high school level with experience and a knowledge of how to handle themselves, along with a life-long memory.

“For those girls to have the opportunity to play in front of a crowd like that is something they’ll remember the rest of their life,” Holloway said. “It’s also something that helps them not be big-eyed down the road when they get to play those opportunities again. Those two groups, they come together, they’re going to get that opportunity again, probably more often than not. Being there and doing it not only prepares them for the future, but it also is something that they’ll get to take with them.”

See our online story and photo galleries at themountaineer.com for more pictures from this game.