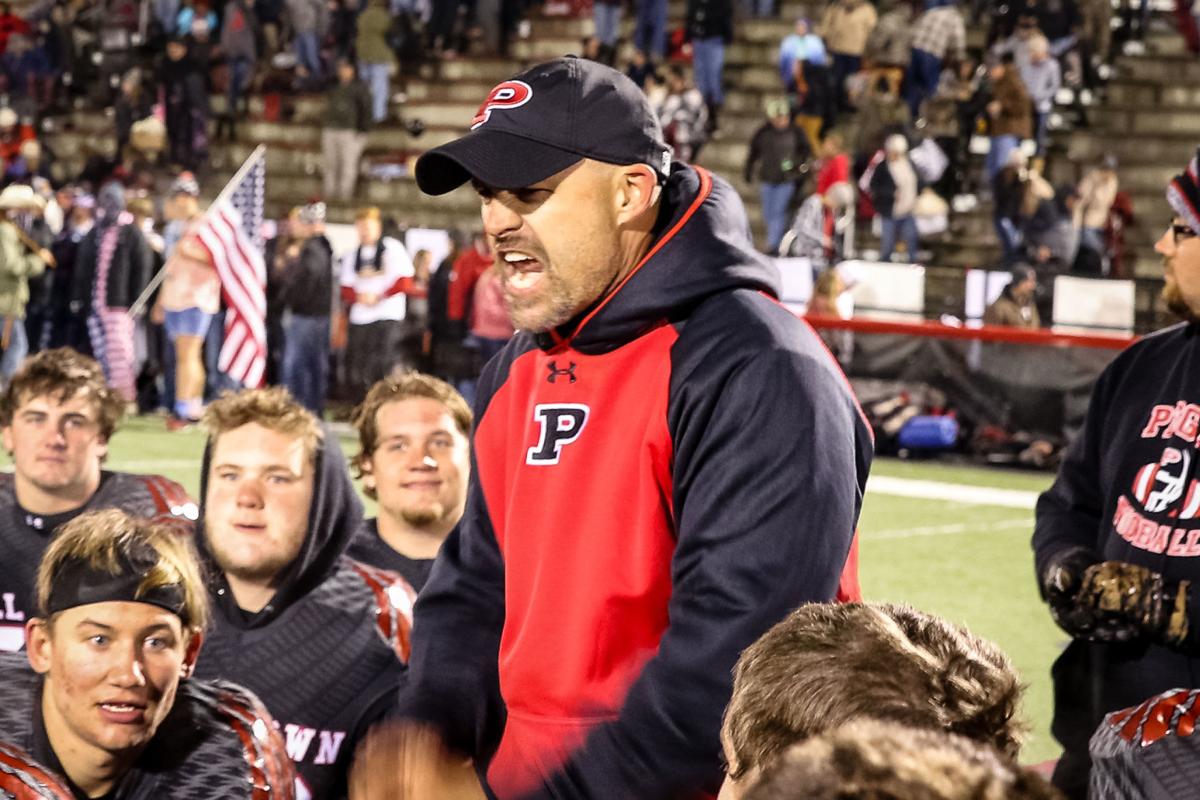 CELEBRATION — Pisgah head coach Brett Chappell, who clinched a share of the Mountain Six Conference Title and a home playoff game is shown in this Nov. 9, 2019 photo. 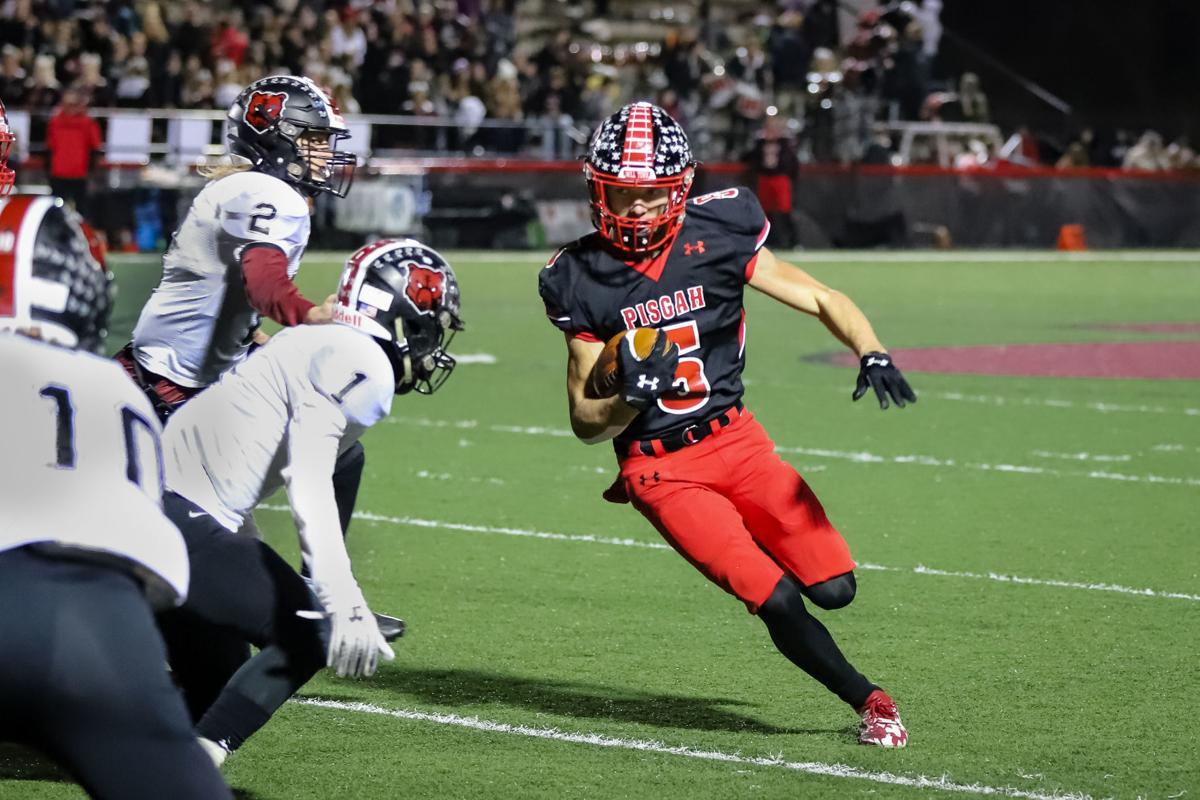 CARRY ON — Cain Early, who excelled at both running back and receiver last season, is slated to be one of two quarterbacks for The Bears this year. 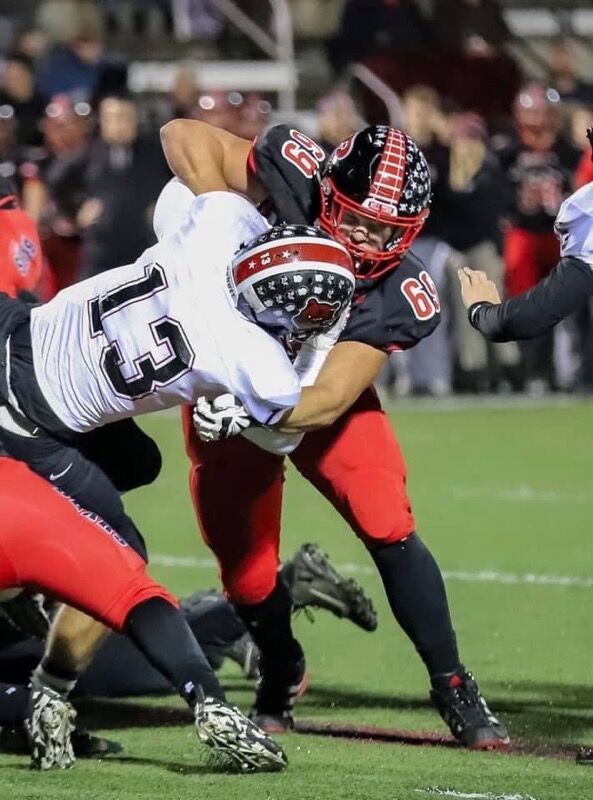 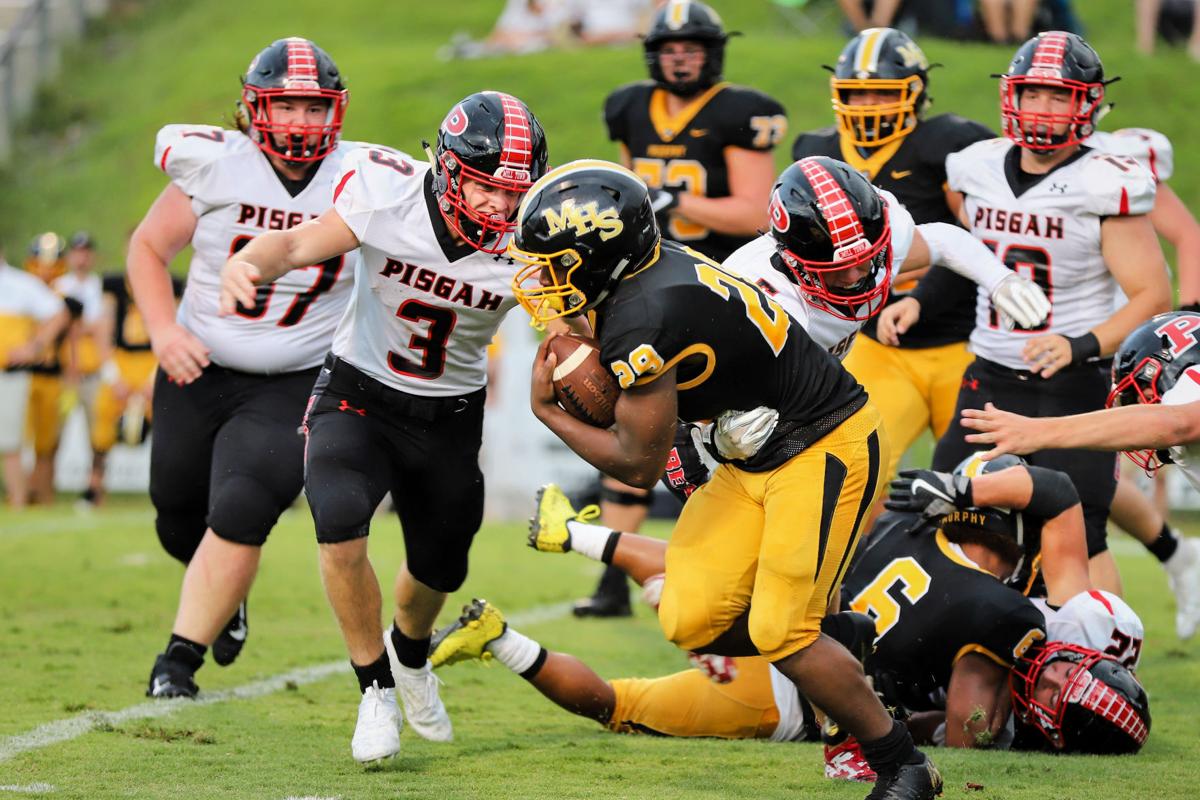 TACKLE — Levi Cagle (3) goes after the ball carrier during a season-opening loss at Murphy last year. Cagle was injured early in the season but will likely be a key component on both sides of the ball this year. 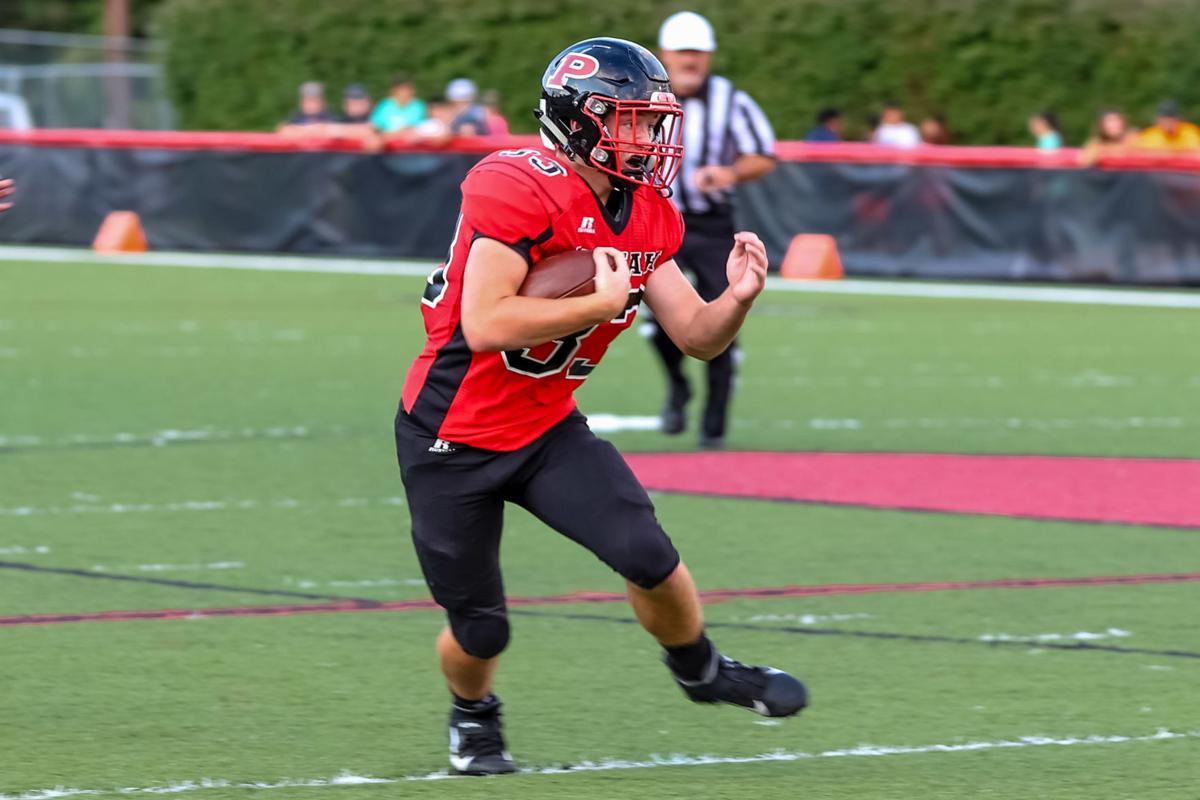 DUAL POSITIONS — Fresh off the basketball court, Bailey Stockton will be playing both offense and defense for the Bears when the season opens with the Pisgah/Tuscola game on Feb. 26. 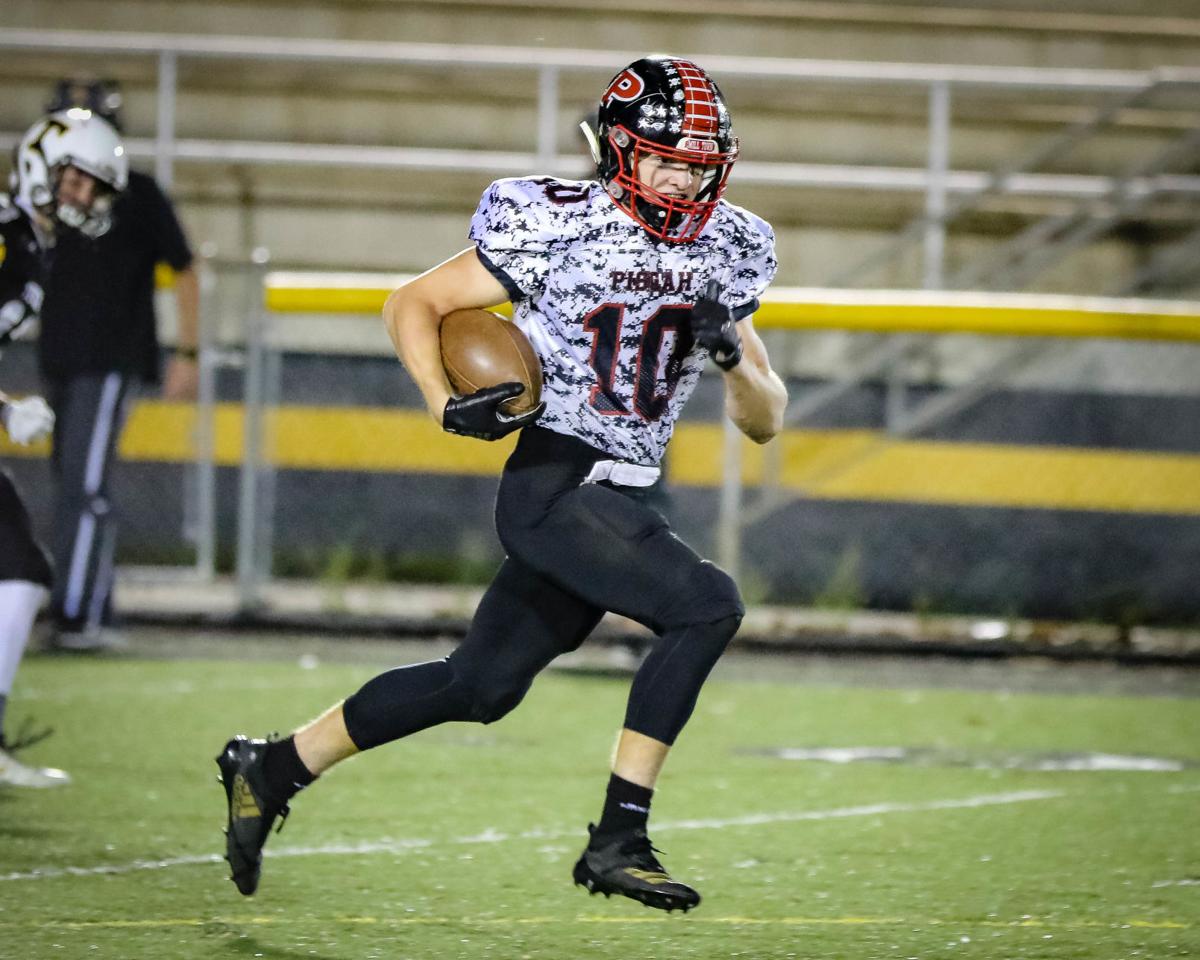 RETURNING TO PLAY — After an injury, Levi Cagle will be returning to play as a running back and linebacker.

CELEBRATION — Pisgah head coach Brett Chappell, who clinched a share of the Mountain Six Conference Title and a home playoff game is shown in this Nov. 9, 2019 photo.

CARRY ON — Cain Early, who excelled at both running back and receiver last season, is slated to be one of two quarterbacks for The Bears this year.

TACKLE — Levi Cagle (3) goes after the ball carrier during a season-opening loss at Murphy last year. Cagle was injured early in the season but will likely be a key component on both sides of the ball this year.

DUAL POSITIONS — Fresh off the basketball court, Bailey Stockton will be playing both offense and defense for the Bears when the season opens with the Pisgah/Tuscola game on Feb. 26.

RETURNING TO PLAY — After an injury, Levi Cagle will be returning to play as a running back and linebacker.

Amid a pandemic and the often unequal measures that can create additional obstacles for teams in all sports, the key to success is adaptability.

Although Pisgah hasn’t played a football game in about 15 months, its team returns plenty of experience and brings a strong senior class into its seven-game season, which is likely to serve as even more of an advantage than normal.

The most notable difference at high school football games in North Carolina this year may be the lack of fans. Even if the state ups the allowed number of spectators from 100, stadiums will be noticeably empty.

Considering Pisgah has built a reputation for having one of the best home-field advantages in the region, that could have a significant impact. However, head coach Brett Chappell said that won’t be a chief concern once the lights come on and the first kickoff is sent.

“From a coach’s standpoint, once we put the headsets on, everything else disappears a bit,” said Chappell. “It becomes about the conversations with other coaches. You kind of lose track of everything in the stands.”

But Chappell did admit that the lack of fans could have an effect on some plays.

“I think the first place you’ll probably see a difference is in critical-down situations where you’re crowds get into the game and are vocal and you can hear them,” he said. “That will be one of the first places I’ll miss having that intensity in the stands.”

As the COVID-19 pandemic waxed and waned, the prospect of even having a football season was uncertain, and even once it was solidified, teams were informed they would have little chance to prepare with everyone on the field at the same time. While workouts began back in June of last year, a lack of contact in practices may spell trouble for some teams.

With the experience the Bears bring back on both sides of the ball, the challenges faced by less experienced teams amid the compressed preseason may be an advantage for Pisgah, at least for now.

“Having so many seniors … that may give us the advantage early on,” Chappell said. “But I think by the end of the season it’s going to even itself back out with how many starts a lot of these other team’s kids will have.”

In North Carolina, teams are also playing shortened seasons, meaning Pisgah will only get two-nonconference games — at home in the County Clash against Tuscola next Friday and a few hours away at Mount Airy on March 5.

“There’s going to be some rust to knock off sure,” Chappell said. “We’re trying to get our kids up to speed as quick as we can before conference play because that’s most important as far as playoffs go.”

Winter in North Carolina means a wide variety of weather, from sub-zero windchills to ice storms to blizzards. While Chappell didn’t express much concern over the temperature, he did talk about potentially bad field conditions when playing in stadiums without artificial turf, especially during what Chappell referred to as the wettest winter in several years.

“I think the schools that are fortunate enough and have had the school and county support to have artificial turf are light years ahead of everybody else right now,” he said. “There have been so many teams that have had to practice in the gym just because their fields are underwater or their simply mud. I feel for those teams.”

The Bears are going to play on grass fields at both Mt. Airy and Franklin, but that’s it.

Unlike normal years, in 2021, the high school basketball season runs into the beginning of the football season, meaning athletes who are on both varsity teams will have to split their attention almost all the way up to the County Clash.

“It’s been tough to juggle those things and make sure they’re fresh for basketball, because priority number one for us is making sure the sport that’s in season is taking precedent,” Chappell said.

“Those guys have done a good job for us in the practices we’ve had them,” Chappell said. “We’ve had other guys filling those roles when they’re not here who we’re confident in as well.”

One player who suffered a season-ending injury early on in the 2019 season was Levi Cagle, a key component on both sides of the ball as a running back and a linebacker.

“Having Levi back bodes well for us,” Chappell said. “He’s had a good offseason … He’s done really well for us so far on and off the field, and we’re excited to see him play again.”

Due to a couple of player transfers after last season, there were questions surrounding the Bears’ quarterback situation. Chappell said he has moved two players from other positions to line up under center.

While some may recall Free made a few nice plays in late-season varsity games last year, Early will be more familiar even to casual fans. Early, who Chappell said is taking most of the snaps with the starting lineup in practice, began last season as a wide receiver but moved to running back when Cagle was injured. Early excelled at both positions, and even had a couple of occasions to show off his arm.

“They have both played quarterback at some point during their careers, maybe not for us at the high school level, but they have at some point,” Chappell said. “Both are good athletes, and they each bring a little different thing to the table. The thing for us is seeing who can command the huddle and gain the respect of the offensive line and those backs that are with them and run the system as best as we can.”

Chappell said he sees that confidence in both players.

“They call it moxie or however you want to say it, and both of those young men are confident when they’re back there,” he said. “That bodes well for us now and for the future.”

And those quarterbacks should be fairly well protected, considering the offensive line is returning four starters, including tackle Neyland Walker, who recently committed to playing college ball at Charleston Southern.

Likewise, the defensive line will be bringing every starter back, including all-conference defensive end Warner Mull.

“We feel like that will hopefully be a strong suit for us,” Chappell said of the defensive line.

It’s been a long road to kickoff for Pisgah and other North Carolina high school football teams, but Chappell said now that the time is here for the season to begin, he’s hoping to give his players the season they deserve.

“That’s been a priority,” he said. “Our perspective here at Pisgah is to try to get these kids in a position to be able to play to be successful and make some memories, especially for the seniors, especially for those guys that have put in all the time.”

Check Wednesday’s Mountaineer for a Tuscola season preview, as well as a preview of next week’s County Clash.