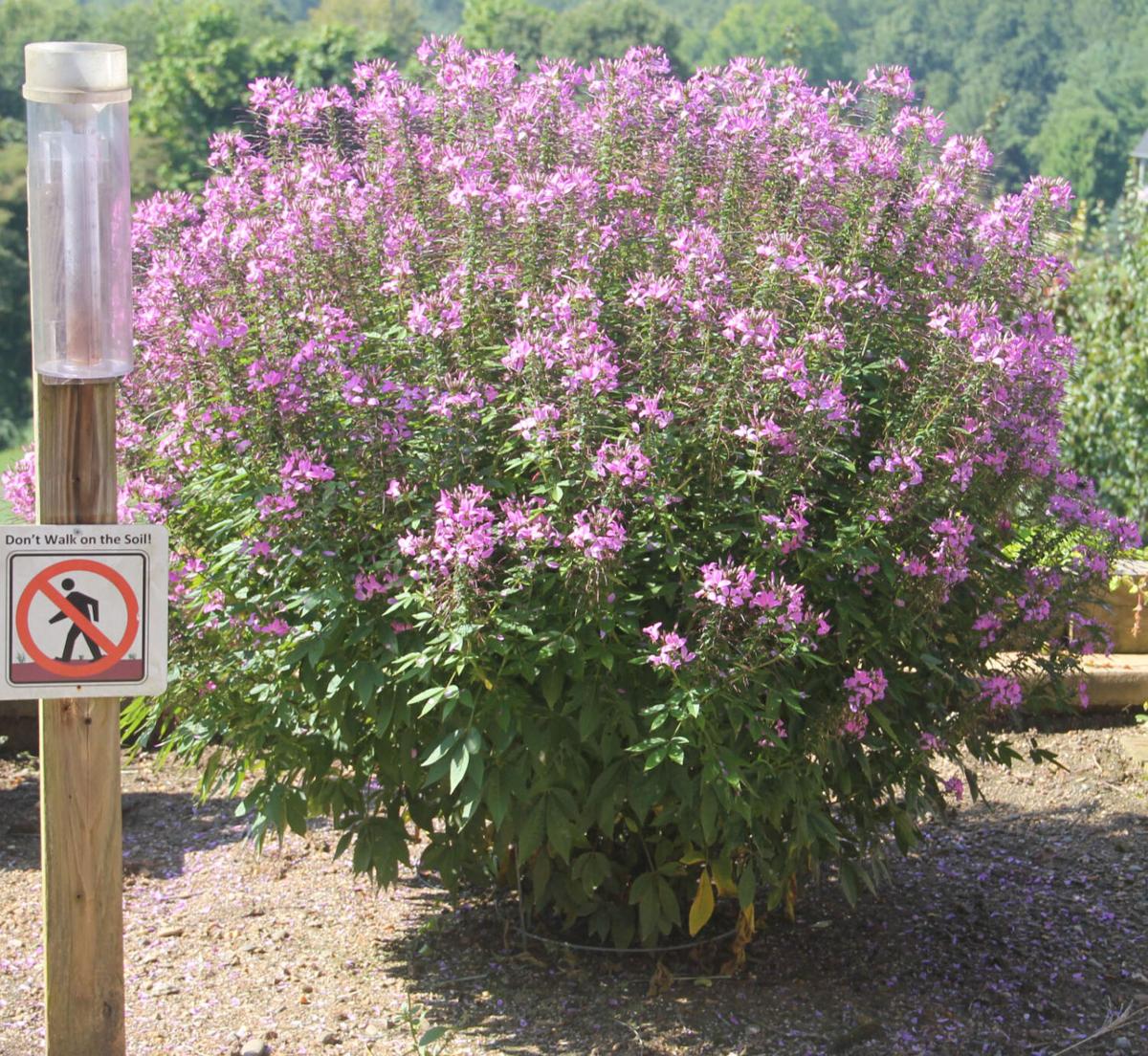 For the last couple of years I’ve planted a hybrid cleome (“spider flower”) named ‘Señorita Rosalita’. This award-winner gets 4 to 5 feet tall and 3 to 4 feet wide and blooms profusely all summer. Here are some notes on a really beautiful annual.

Compared to other cleomes, ‘Señorita Rosalita’ flowers from the base to the top of the plant instead of blooming only at the tip of each stem. Other comparisons: because its flowers are sterile it doesn’t reseed itself like most cleomes; deadheading isn’t necessary; the plants aren’t sticky nor do they have thorns; and there are no “skunk-like” odors.

Find a sunny, well drained site and dig some organic matter into the soil. Install the plants at least 3 feet apart after the safe planting date (Mother’s Day in Haywood County.) Fertilize like you would other in-ground annuals (I scatter some 10-10-10 monthly). Water sparingly. The plants will grow vigorously.

Almost too vigorously, as it turns out. A heavy rain can add so much weight to the flowers that stems will snap off at the base of the plant. I checked with a nursery that grows ‘Señorita Rosalita’ and they recommended either cutting back the plant monthly or installing some sort of support system at planting time.

One plant was installed without support; neither were the stems cut back as recommended.

I cut off a large, heavy duty tomato cage just above the bottom two rings. The 16 inch diameter top ring was about a foot off the ground once the feet of the cage were pushed into the soil around the second plant. For the first 4 to 6 weeks I forced all the branches to grow inside the top ring.

I drove three heavy-duty fence stakes into the ground in a circle about a foot from the third plant. As the plant grew I tied some parachute cord to the stakes about a foot off the ground, and forced all the stems to grow inside the cord. This was done again a month later with more cord about 2 feet above the soil.

A heavy rain in mid-July tore more than half the stems off the unsupported plant, but the second and third plants had no broken branches all summer. Honey bees and hummingbirds loved them from early June through the first hard frost.

While the catalogs say ‘Señorita Rosalita’ would be a good container plant, the container would have to be huge unless the plant is trimmed each month.

If you can’t find ‘Señorita Rosalita’ try one of the ClioTM cleome series, which are also sterile. Plant with one of the support systems described above. These plants will make you very happy.