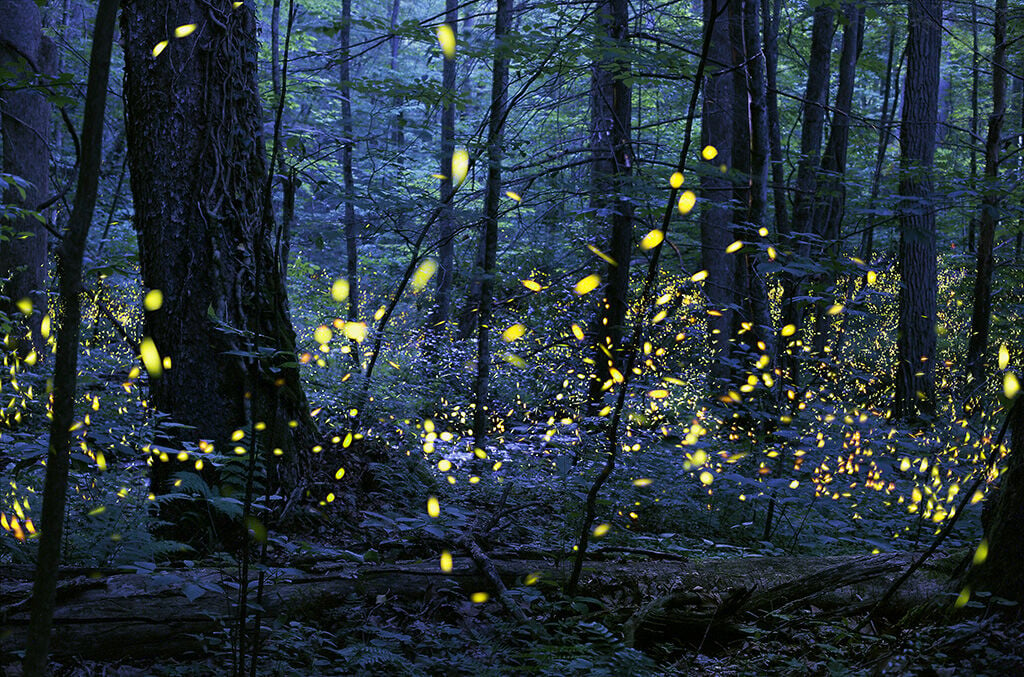 LIGHT SHOW — Synchronous fireflies are a naturally occurring phenomenon of Photinus carolinus, a species that flashes in unison.

MATING CALL — Male lightning bugs flash to attract attention of females, which send a signal of their own from the ground, though it’s not bright enough to be visible to the human eye. Mating can last 12 hours. 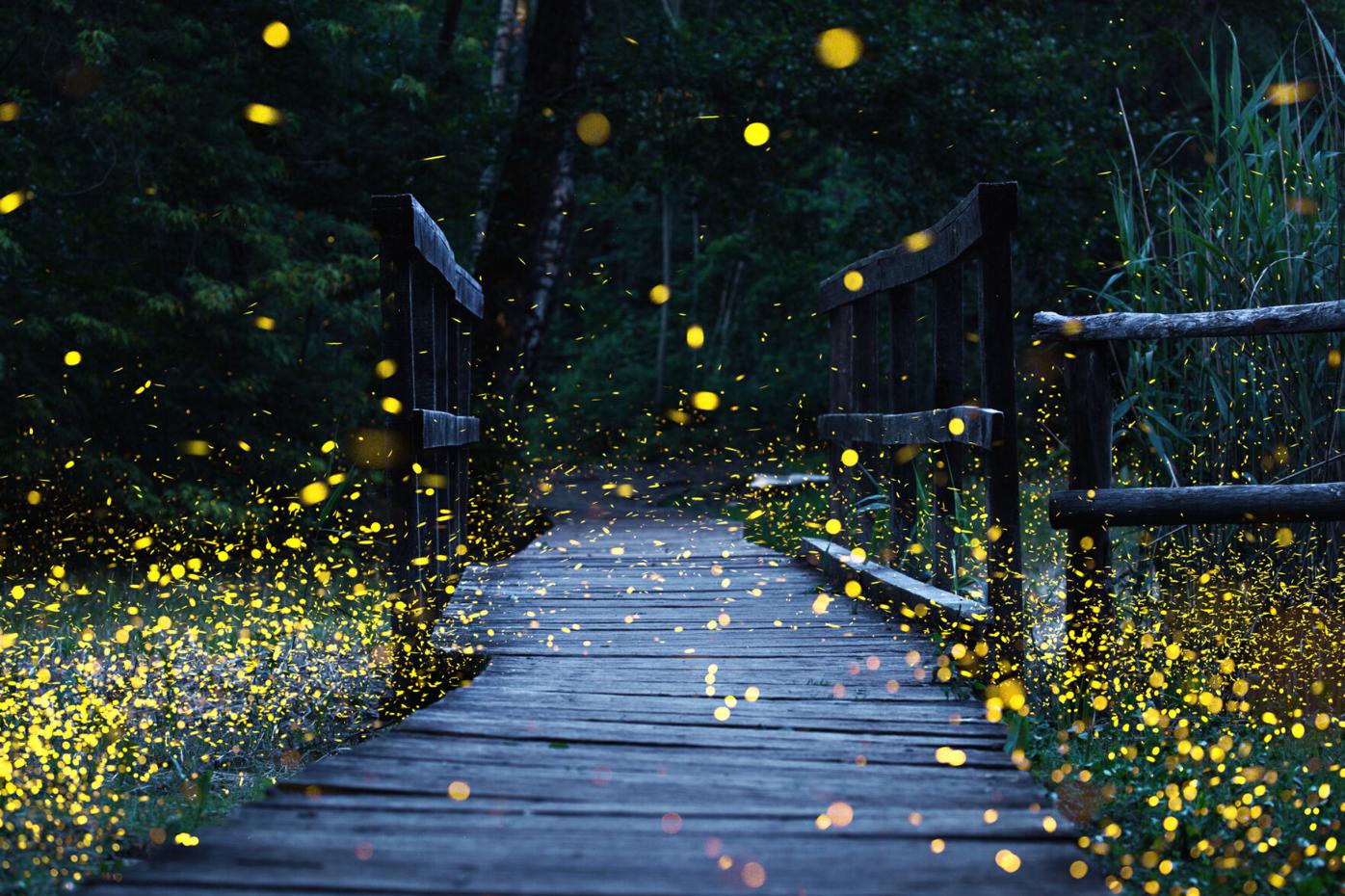 AWE AND WONDER — There are around 125 species of fireflies in North America, whose flashes are created by a chemical reaction. 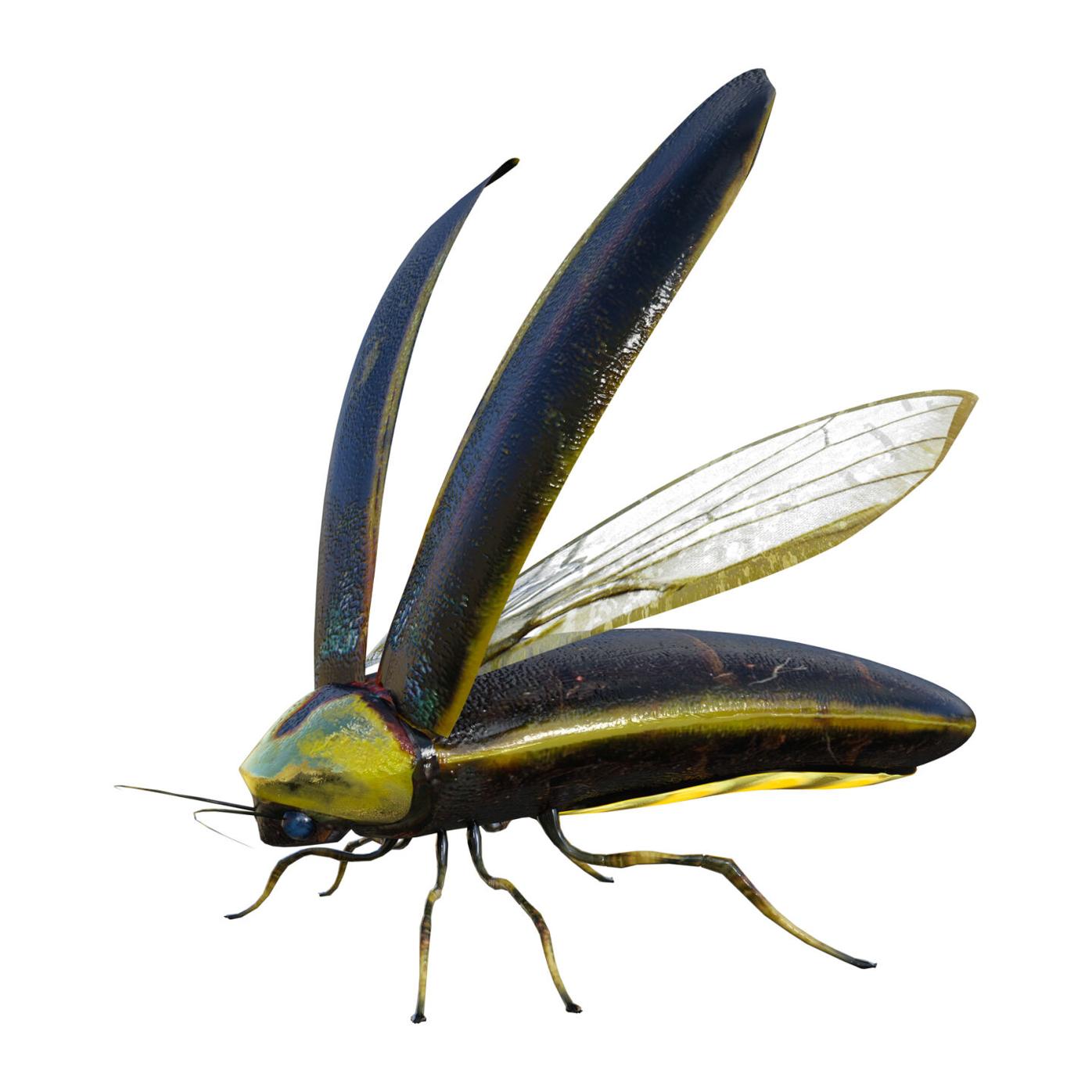 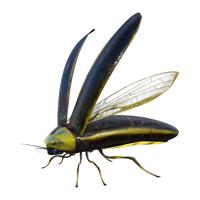 FLEETING BEAUTY — The life cycle of a firefly is roughly 3-4 weeks.

LIGHT SHOW — Synchronous fireflies are a naturally occurring phenomenon of Photinus carolinus, a species that flashes in unison.

MATING CALL — Male lightning bugs flash to attract attention of females, which send a signal of their own from the ground, though it’s not bright enough to be visible to the human eye. Mating can last 12 hours.

AWE AND WONDER — There are around 125 species of fireflies in North America, whose flashes are created by a chemical reaction.

FLEETING BEAUTY — The life cycle of a firefly is roughly 3-4 weeks.

It is impossible to be “uncheered” by lightning bugs. They dance romantically through the night to the beat of their own music. They are like earth-stars glowing in the forest.

Lightning bugs remind us of magic, childlike wonder, and the possibility of dreams. They ignite our curiosity and liberate our imagination. They convince us that anything is possible as long as we believe.

Their lanterns are lit by an inner fire reminding us that light is the power of life and that our paths are made brighter if we allow love to lead the dance.

Interpreting the significance of their symbology can bring self-illumination and freedom of spirit. Yet, there is infinite joy in simply enjoying the magnificence of lightening bugs just the way they are.

Fireflies are probably the closest thing nature has to magic — they light the world from the inside out. But synchronous fireflies are extraordinarily magical because masses of males flash rhythmically in unison.

They quickly flash four to 11 yellow flashes at half-second intervals followed by six to nine seconds of darkness, all while flying horizontally 3-7 feet above the ground.

Scientifically they are bioluminescent beetles. Their glow comes from an internal chemical reaction that combines oxygen and calcium with a series of enzymes. They flash for several reasons, to communicate, to attract mates, and to frighten predators.

The synchronous fireflies in the Smokies, classified as Photinus carolinus, have a distinctive flash pattern. Because of their high density in the area, it seems the Smoky Mountains are the epicenter for this particular species. However, they can be seen all over the Appalachians from North Georgia to New York.

Various species of fireflies can be seen at different times all summer. The Great Smoky Mountains National Park lists a total of 19 species, and there are approximately 125 species in North America. They do not bite, sting, or destroy flower gardens.

Males are more common than females and are the ones flying around doing all the obvious flashing, bidding for a mate. Females crawl on the ground in leaf litter or grass.

When they recognize the male of their choice, they bend their abdomen, aim their tiny lantern, and send a two-beat flash during the dark period. They hope the male will see her, land, and mate. Her light is too weak for us to see.

Competition between males is so intense that hordes of males might form a mating-cluster around one overwhelmed female. Copulation can last for 12 or more hours. Females can mate several times with different males over the course of their three-to-four-week life span.

Fireflies go through a complete metamorphosis before developing into an adult. The female lays about forty eggs, which hatch in two or three weeks. The longest stage of development is as larva that lasts one or three years. Larvae eat and molt as they grow.

They ingest earthworms, slugs, snails, and other soft-bodied insects. How do they do that? With their hollow mandibles, teeth, they inject venom into their prey, which paralyzes and dissolves them from the inside out. The pupa stage lasts for another one to four weeks. The adult lives three to four weeks and does not need to eat.

Fireflies have an excellent defense mechanism against their numerous predators. They have sticky, poisonous blood that can induce sickness or death to marauders.

During daylight hours, they are camouflaged by resting on the undersides of leaves, on tree trunks, or under leaf litter. They spend the winters under bark or logs as eggs, larvae, or pupae.

The small Blue Ghost fireflies are often present at the same time as the synchronous fireflies. Those males flash a continuous or sputtering bluish-green light that lasts from seconds to over a minute while slowly flying 1-4 feet over the forest floor.

They are searching for tiny, wingless females glowing from the ground. At night, the female glows continuously from four to nine greenish dots on her body.

It is not true there are no fireflies in the west. They just don’t exhibit a brilliant light. They have been found in California, the Mojave Desert, even in Alberta, Canada. They are very isolated and hard to find.

• Cover flashlights with colored cellophane since white light disrupts their courtship and impairs other viewers’ experience.

• Do not capture fireflies.

• Respect their habitat and stay on maintained trails.

Wilma Durpo is a naturalist, nature writer and author of Smoky Mountain Echoes. She resides in Waynesville and regularly appears as a nature columnist for The Mountaineer.