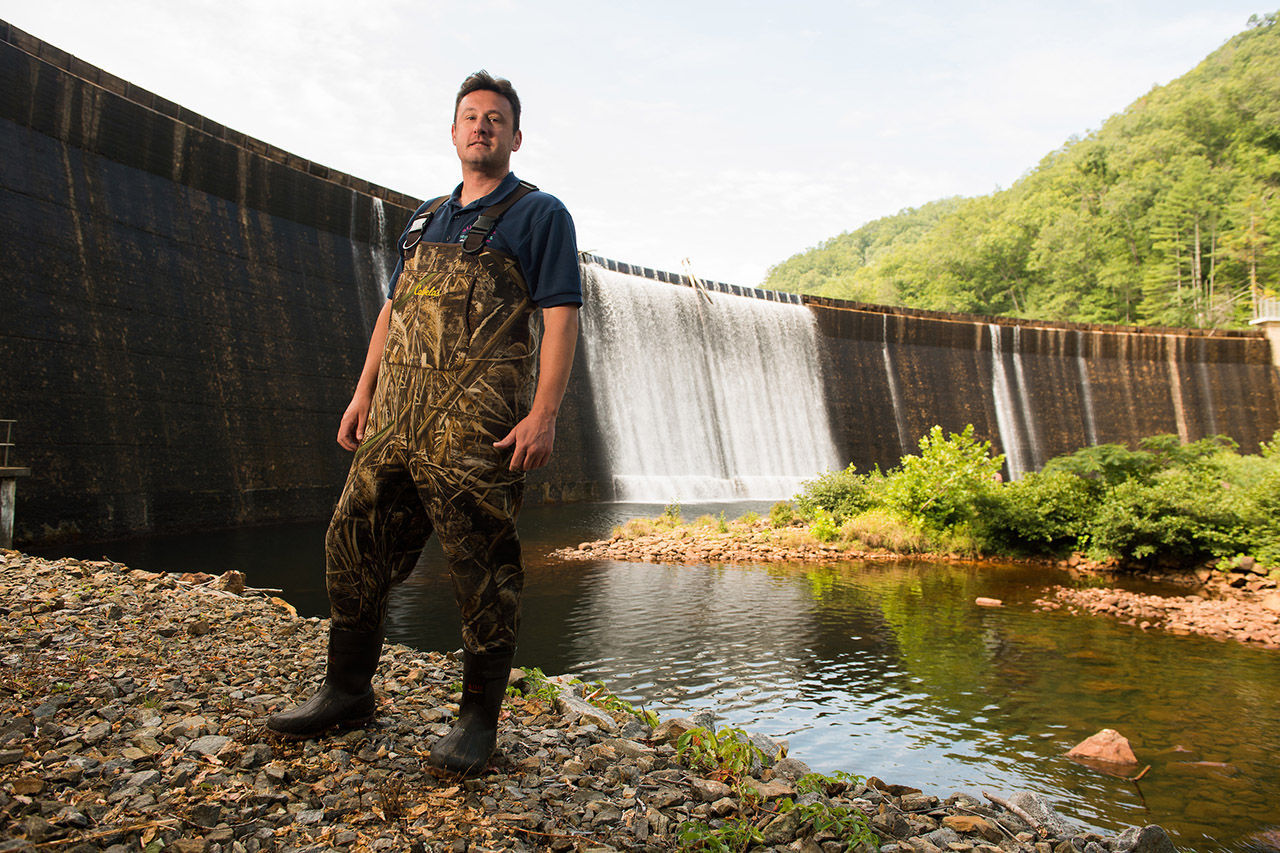 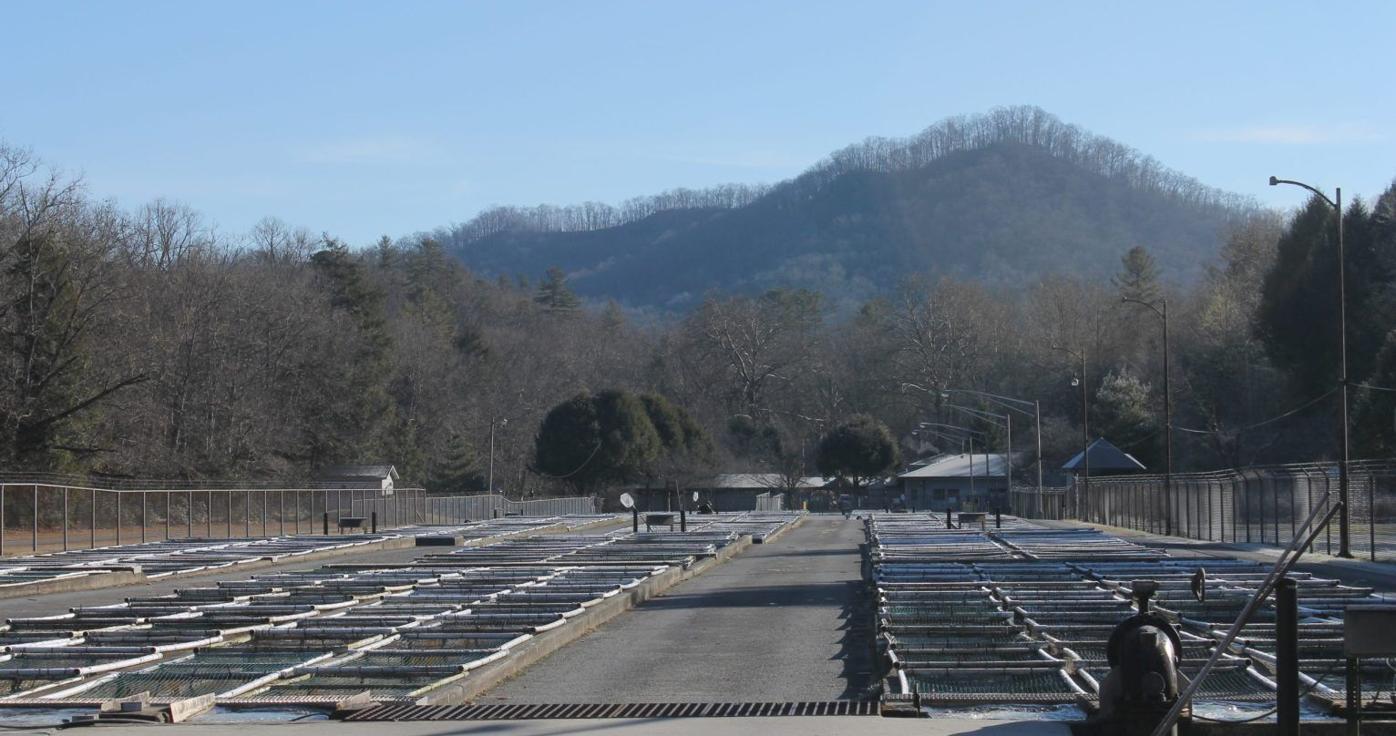 RACEWAYS — Climate change could eventually take its toll on the ability of the Bobby N. Setzer State Hatchery to raise trout, which need cool water to survive. 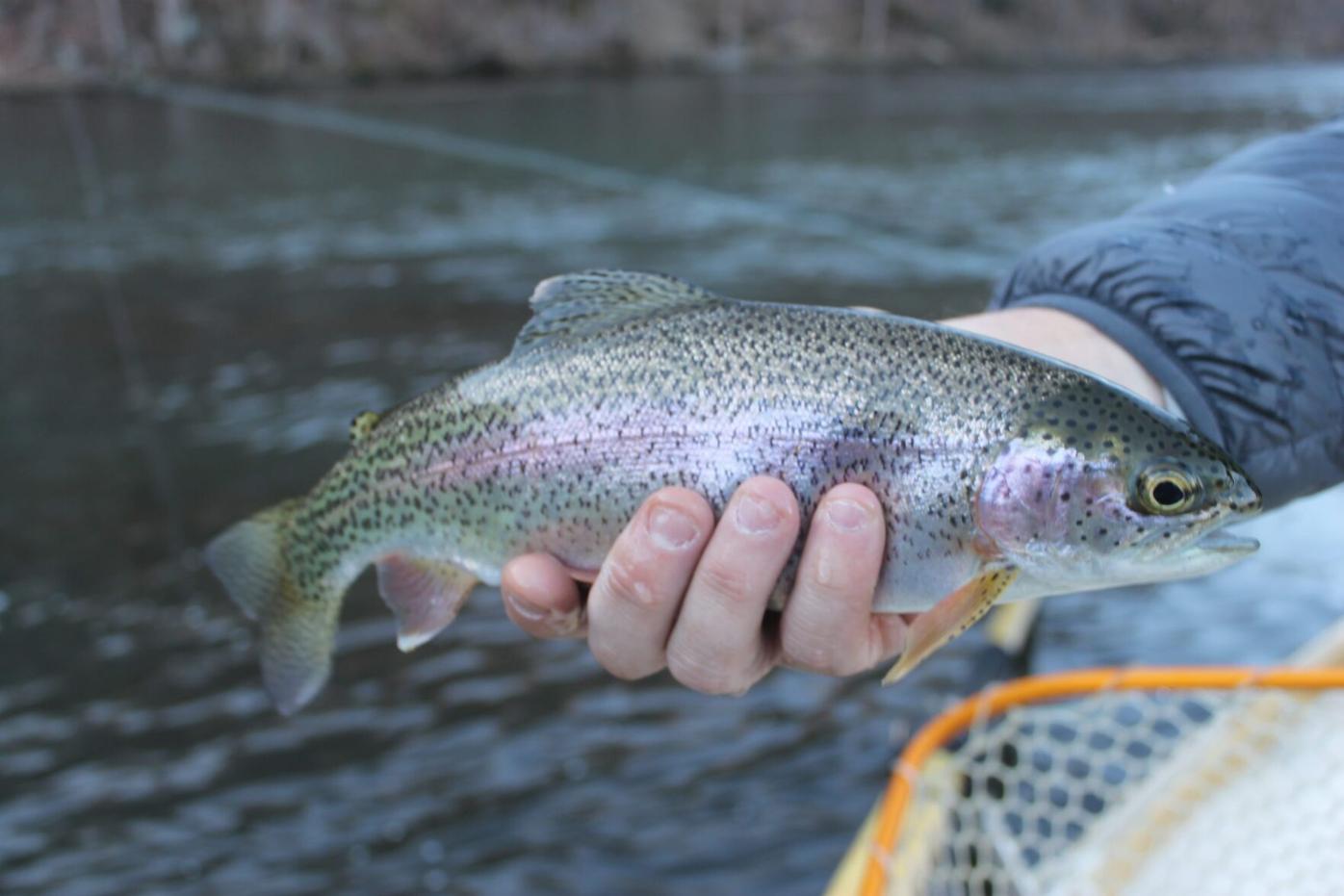 {span}A trout at the Setzer Hatchery in Brevard. {/span} 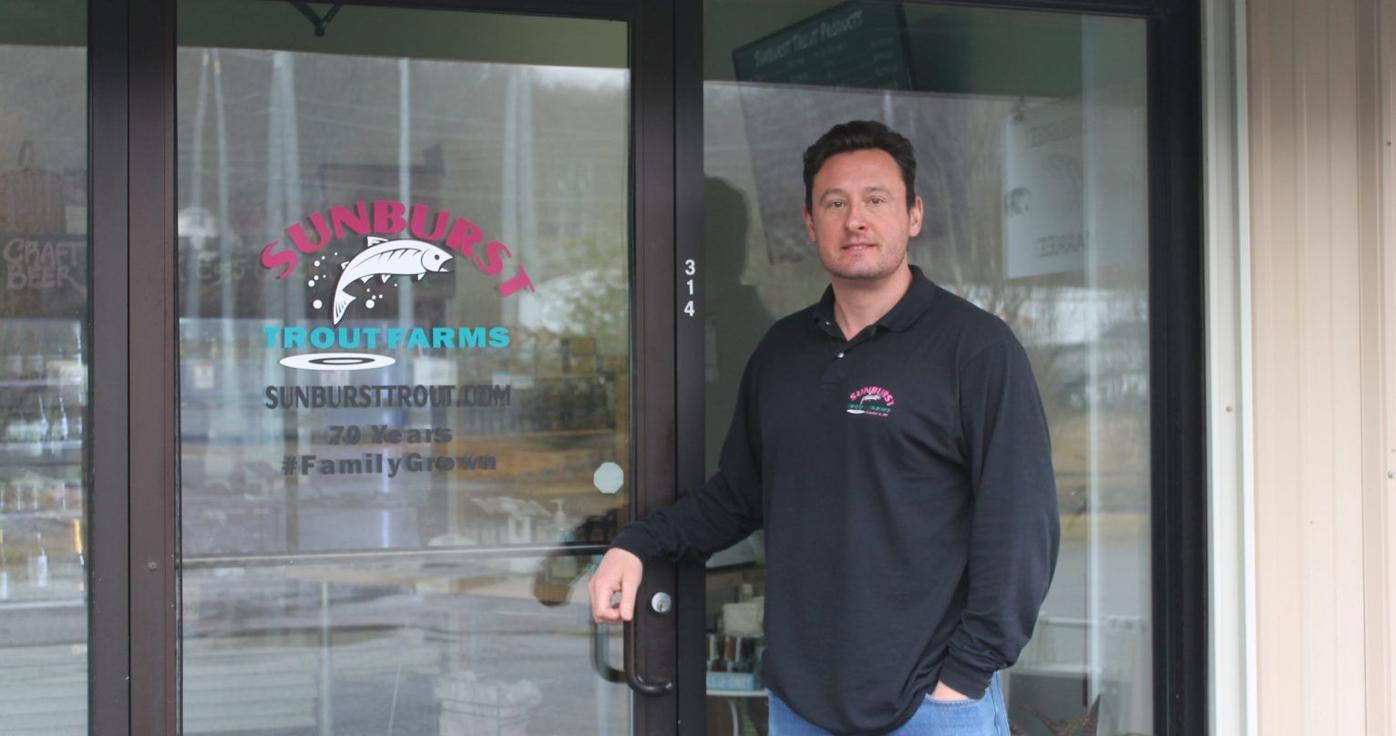 This article was reprinted with permission by Carolina Public Press, an independent, in-depth and investigative nonprofit news service for North Carolina.

Raising trout in Western North Carolina is a time — and labor — intensive process, and the growing threat of climate change only worsens the situation, creating difficulties for hatcheries and recreational fisherman.

The Setzer facility, one of three cold-water trout hatcheries run by the state’s Wildlife Resources Commission, raises fish to support the booming sport fishing industry in Western North Carolina, a $383 million venture in 2014 that supported more than 3,500 jobs.

But sport fishing is only one part of the North Carolina trout industry affected by climate change. Farmers who raise fish to sell to restaurants and retailers, fishing guides who make their living on the water and conservationists who look for wild trout as indicators of a healthy ecosystem face mounting concerns about climate change.

By 2060, however, Western North Carolina will likely see 10-20 more days a year when temperatures are above 95 degrees, and both the annual hottest and coldest temperatures will increase by 3-5 degrees, according to a 2020 report by the N.C. Institute for Climate Science.

The warmer days and nights might lead to higher water temperatures, which, if they get to 70 degrees or above, can be lethal to trout, whose precarious hatchery journey at Setzer starts as an egg in a small green tray.

After hatching, the trout are moved to an indoor trough, then to a field of long channels dug in the pavement called raceways, where they live for months until they are big enough to stock.

In the raceways, stressors abound. Rain can wash silt, leaf litter and other debris into the gates that divert water from the Davidson River, stopping the flow of fresh water. Sand can wash in, making breathing difficult. Floods can wipe out an entire inventory. Summer heat lowers the water level and spikes the temperature, making the stressed trout more susceptible to disease.

Sunburst Trout Farms in Haywood County is one of only two trout farms in the state that sell fish products to retailers. Wes Eason and his brother Ben own Sunburst, which has 25 employees.

The Easons are third-generation trout farmers whose grandfather started the business in 1948. Their flagship farm, located below Lake Logan, uses water from the bottom third of the lake, but if there is an extended period without rain and temperatures rise into the high 80s and above, the water temperatures start to climb.

“There’s not any on-the-fly adjustments we can make to control the water temperature,” Wes Eason explains.

Instead of trying to manually cool the water, which would be prohibitively expensive, the Sunburst team leased a second farm at a higher elevation to aim for cooler water in the summer. During those months, workers can reduce capacity at their main farm while continuing to grow fish at the second farm.

“That water being colder by a few degrees makes all the difference in the world,” Eason said. “We’re chasing the coolest water.”

While having multiple farms helps with rising temperatures, there are other worries. Last September, a strong storm hit without warning above the leased farm, washing debris into the intake pipe and clogging it. The fish used up all the available oxygen and died.

“We lost probably 30,000 pounds of fish as a result of the flood,” Eason said. “Some stuff you just have no control over.”

Since the loss, Sunburst added an alarm so that if the water level drops, a float device notifies staff phones, alerting them to clean the intake.

Both daily work and insightful long-term planning are required for these managers to protect trout against the perils of a changing climate. And while trout are the center of many people’s jobs, they’re also much more than that.

“Trout mean everything to me because it’s not only my livelihood, it’s my passion,” Eason muses. “Seeing the finished product that supertalented chefs can do with a fish that we’ve had in our care gives me a sense of pride.”

Threats to the sport

Recreational fishermen share Eason’s passion and concern. Warmer water and stronger storms challenge fishing guides who take their clients out on the river.

Because they often visit the same fishing spots repeatedly, guides like Debbie Gillespie are attuned to the changes in weather and environment that affect trout health.

A guide for the past five years, Gillespie has spent more than 200 days a year on rivers in North Carolina and Tennessee. One of the rivers she fishes on most is the Davidson, which feeds the Setzer hatchery.

“I’ve seen more changes on the Davidson as far as sedimentation, flooding, quality of fishing goes because I spend so much time there,” Gillespie explained.

Intense rains can muddy the streams, killing the macroinvertebrates that trout eat and completely changing the dynamic of a fishing spot, she said. She knows which spots to avoid in the summer when the water levels are too low and warm to support trout.

On the Davidson River in the summer of 2019, Gillespie said, “You could only fish in the morning because later the water temperatures were so high.”

The ramifications of climate change stretch beyond the economic effects for Gillespie, who sees trout as a way to help recreational fishermen view the world in a different way.

“Most people just want to go out to catch fish and are not interested in the environment,” she said. “Trout give me the opportunity to get people out there to help them see just how important conservation is.”

Climate change affects how North Carolinians grow and catch fish, raising questions about how to address the challenges moving forward.

At the Setzer Hatchery, one of the biggest hurdles is that the raceways are exposed to the elements. The concrete construction, surrounded by asphalt, can cause a 3- to 4-degree increase in the water temperature between the time it comes in and when it is discharged. Open raceways also make it easier for birds to prey on trout.

The hatchery staff is planning a renovation that will include a giant metal pole shed big enough to cover all of the raceways and tall enough to drive under. The changes will help lower temperatures, discourage birds and generally reduce stress.

“In the fish world, if you can reduce stress, that’s key,” David Deaton, fish production supervisor for the Wildlife Resources Commission, explained. “Reducing stress decreases our mortality, which increases our production and efficiency.”

Other steps by hatchery managers and farmers can mitigate the risk. At Setzer, the staff can close the intake gate for a short time during storms to prevent flooding or sand buildup.

“We don’t like to do that, because if it happens in the middle of the summer, and the fish are already pissed, it can increase their stress,” Deaton said. “But it keeps them alive.”

The long-term effects of rising temperatures on the trout population are not yet known, but Deaton said the shift may require a move away from trout production.

“Change in temperature is going to be important in the future. Speaking for our hatcheries, I think we can still operate as trout hatcheries with minor increases,” he said. “If it starts to get where we’re pushing 75 degrees (in water temperature) three or four months out of the year, we might have to rethink whether we can do trout at those facilities.”

We've been enjoying Sunburst trout for 30 years, and knew the late Mr. Jennings who started this wonderful business after WW2. Please folks- think about what you can do in Haywood County every day to put less heat-trapping co2 and methane into the atmosphere. Less single use plastic bags and bottles, thoughtful planning of auto/truck/gasoline use. Ease back just a bit on meat consumption...And builders/developers- please look hard at run-off, construct correct drainage especially in the face of the ever more intense rain events we are having. Everyone- use native plant species whenever possible that are suited for the deep rooting that preserves stream banks and prevents erosion and landslides.