To plant a tree in memory of Leonard Smith as a living tribute, please visit Tribute Store. 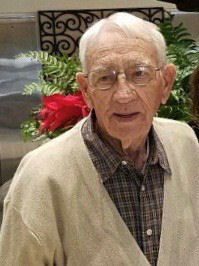 To plant a tree in memory of Leonard Smith as a living tribute, please visit Tribute Store.
+1

He was one of four children: Lewis and Lawrence Smith and Pauline Scroggs. He graduated from Clyde High School in 1938. Leonard loved the mountains of North Carolina and especially his home on Haynes Hill that has been in his family since 1922.

Leonard served in the N.C. National Guard until his unit was activated during World War II. In 1943, he joined the Army Air Corp (US Air Force) and was a pilot with the Eighth Air Force flying B17’s over Europe.

On July 16, 1944, he was shot down over Germany and was in a German POW camp until June 1945. Leonard was awarded the Purple Heart and Air Medal.

Upon returning to the United States after the war, Leonard met the love of his life and wife of 53 years, Aileen Smathers. They were married in Canton on June 21, 1946, and had two children, Leonard, Jr. and Barbara.

In 1949, Leonard began a career with the Federal Aviation Administration (FAA) as an air traffic controller in Greensboro. He retired in 1980 and he and Aileen moved to Port Charlotte, Florida.

Burial services were held on March 22, at Bon-A-Venture Cemetery in Clyde. A celebration of his life will be held in the Clyde area later in the year.

Leonard was very pleased to complete one last mission in November 2019 when he went on an Honor Flight to Washington, D.C. He was given the honor of participating in the hanging of the wreath ceremony at Arlington National Cemetery.

In lieu of flowers, the family has asked to honor Leonard by making donations in his name to the Lee Collier Honor Flight at www.collierhonorflight.org.

The care of Leonard has been entrusted to Wells Funeral Homes and an online memorial register is available at “Obituaries” at www.wellsfuneralhome.com.

To plant a tree in memory of Leonard Smith as a living tribute, please visit Tribute Store.
+1
Plant a tree