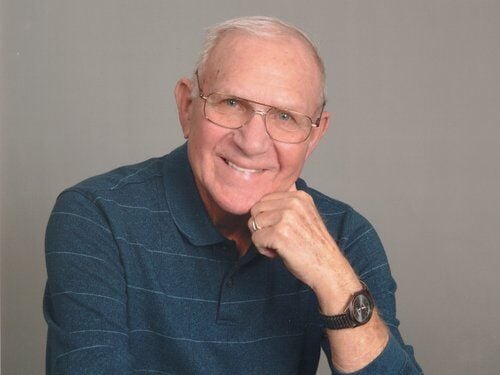 On the first day of 2021, a very gentle, kind, and sweet spirited man was called home by his Heavenly Father. Glenn Eugene Miller was born in Dayton, Ohio, on Dec. 23, 1938 to George and Viola Miller.

He was preceded in death by his parents; son, Timothy Miller; and brother, Larry Miller.

At the age of 5, his family moved to Zephyrhills, Florida, where he grew up with two brothers and one sister. He graduated from Zephyrhills High School and was known for his success on the football field as quarterback, baseball field as second baseman, basketball team as a forward, and for good citizenship in his classes.

Continuing his love of sports, he went on to coach community sports teams and was a die-hard Florida Gators fan and fisherman. He loved to fish with his older brother Craig. Glenn proudly served his country in the U.S. Navy for four years and was stationed in Iceland, where he also played baseball. He later attended Moody Bible Institute in Chicago, Illinois, and earned undergraduate and masters degrees in Christian Counseling from Andersonville Baptist Seminary in 1999.

Glenn worked in various fields over his lifetime. He was a law enforcement officer in Zephyrhills, Florida, a bank auditor for First National Bank of Florida, and retired from the Georgia Baptist Children’s Home as Director of Support Services. He was always ready and willing to do his best no matter what the task. Glenn loved God’s word and spent many hours studying and teaching.

At First Baptist Church of Jacksonville, he led the Chinese Ministry. This developed a lasting love for the Chinese people, and he continued to visit them up until the COVID-19 restrictions were put in place. And in Waynesville, Glenn taught Sunday School at Antioch Baptist Church. Glenn loved his family dearly and will be greatly missed.

Funeral Services will be held at 1 p.m., Saturday, Jan. 9, 2021, at Antioch Baptist Church with Pastor Chris Willmoth officiating. The family will receive friends prior to the service from 11 a.m. to 1 p.m. at the church with social distancing and mask-wearing observed.

In lieu of flowers, donations in memory of Glenn Miller can be given to:

A memorial service for Florida will be planned at a later date.

Smoky Mountain Cremations and Funeral Service of Clyde is caring for the family and the online register is available at www.smokymountaincremations.com.