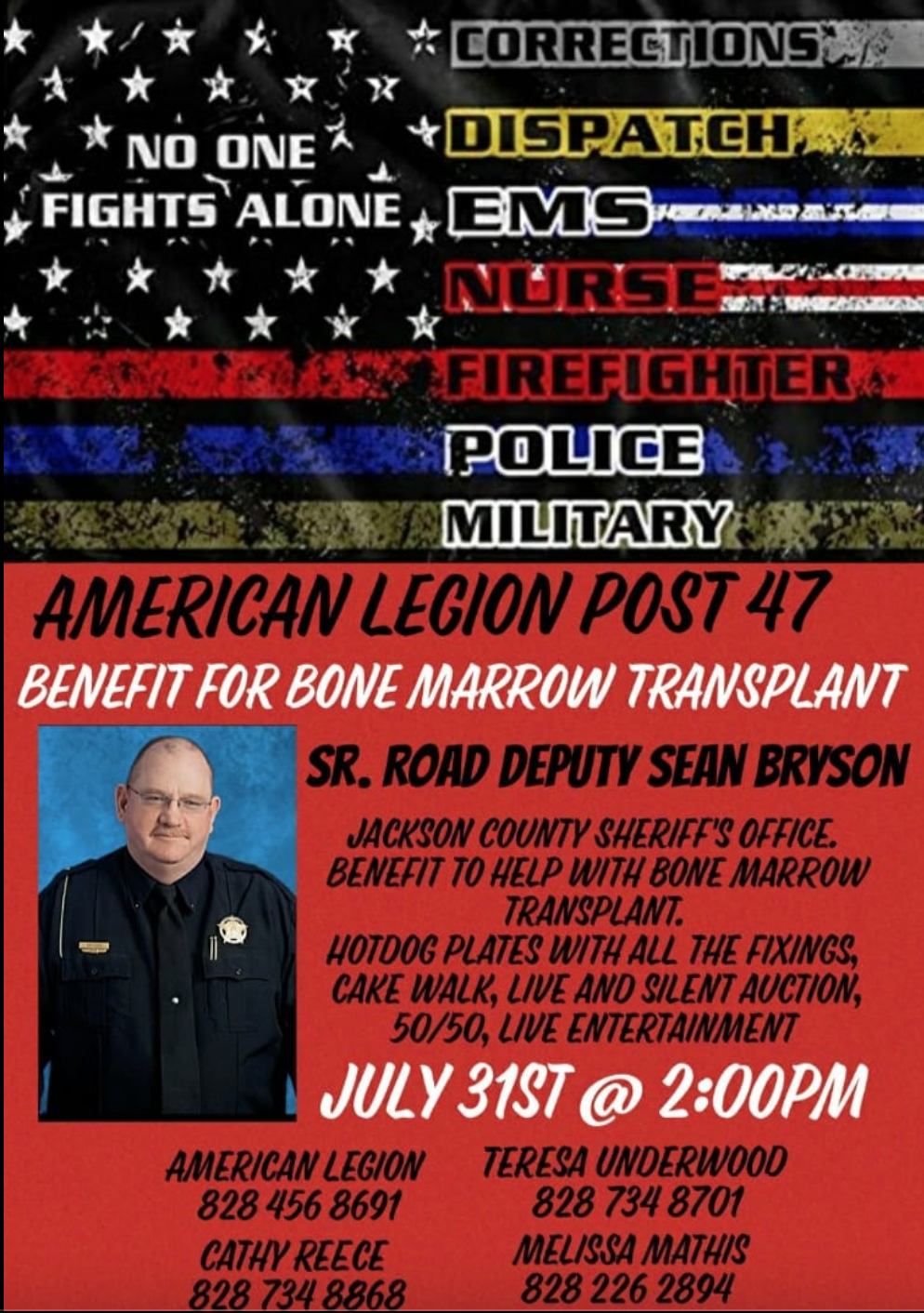 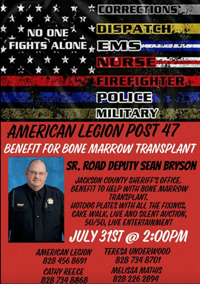 HELPING A PUBLIC SERVANT — A benefit to help Jackson County Sheriff’s Deputy Sean Bryson as he awaits a bone marrow transplant will take place at the Waynesville American Legion July 31. 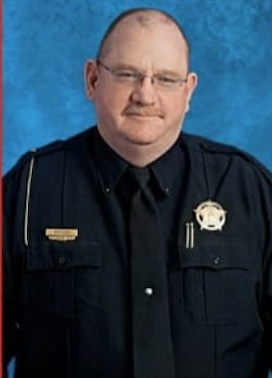 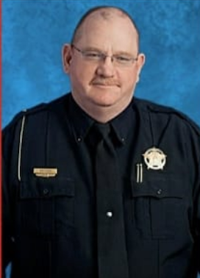 A Jackson County man known around the region for his heart of service is now getting a chance to reap the seeds of kindness he has sewn over his career as a law enforcement officer.

Sean Bryson, 53, is still a sworn Jackson County sheriff’s deputy but has been engaged in a battle for his life and is in need of a bone marrow transplant. To try to raise money for that cause, on July 31, folks at Waynesville American Legion Post 47 are going to host a benefit event.

Cathy Reece, a member of the Waynesville American Legion Auxiliary since 1992, said the idea to host the benefit was born when Sean’s brother, Bill Bryson, spoke with her.

“His brother is a member of Post 47, and he came and asked if we’d do a benefit to help,” Reece said. “Of course we said yes, we would. We are helping the family, and the businesses around Haywood County have really helped me with donations of food and gifts for this.”

The meal served at the benefit will include hot dogs, baked beans, cole slaw, desserts and drinks. There will also be several local churches selling baked goods, a cake walk and both live and silent auctions.

“We just want everybody to come out and support this officer,” Reece said. “It’s going for a good cause. That’s what we do at the American Legion Post 47. We try to help people. We do stuff for Haywood County and even outside of Haywood County.”

Live music — from gospel to rock to karaoke — is scheduled to begin at 2 p.m. and continue throughout the day and well into the evening. One band performing will be The Piney Ridge Band, which plays classic country and southern rock hits. Sean’s son, Kevin Bryson, plays guitar and sings for the band.

Kevin Bryson, a 25-year-old Army veteran, had trouble describing how much the event meant to him, as well as how much it meant to be able to have a role in helping his father.

“It means more to me than I could ever explain really,” he said. “Knowing dad, he’s never been anybody to take anything at all, but he’d give you his last dollar and the shirt off his back. It’s amazing just seeing everybody coming together.”

He also wanted to extend his appreciation to the greater community.

“Thank you, everybody,” he said. “We never expected all this help. I don’t think we can say thank you enough.”

Melissa Mathis, a longtime friend of Sean Bryson who’s known him since high school, has also been crucial in organizing the event alongside Reece and fellow organizer Theresa Underwood. Mathis has also been amazed with the help so many in the region have already offered.

“We were all impressed with how everything is going and all the dedication in Western North Carolina,” she said. “It’s unreal what all people have done.”

Mathis added that she believes the outpouring of support is warranted, considering all her friend has done for others.

“He has served our community for almost two decades,” she said. “It is time we are his backup. His fight’s our fight.”

Bryson is still a sworn deputy but served under Jimmy Ashe, who was in that office until 2014. Bryson began working with Ashe in 2003, just a year after Ashe was first elected.

“I knew him and his family for many years,” Ashe said. “I thought it was a very good hire, and it turned out to be true.”

Ashe said Bryson is well-known in the county he’s served and has been able to embody community policing.

“He’s very loyal and dedicated and was good with the public,” Ashe said. “He has that personality to be able to deal with people and help.”

Like others, Ashe marveled at the outpouring of support from communities across Western North Carolina.

“It’s sort of like a mountain heritage thing,” he said. “Years ago, when someone’s barn burned, it was the whole community that came together to build that barn back. We do pull together in times of trouble.”

“He’s a gentle giant, and people recognize that, so it’s important that the community comes by and helps him in his time of need as he has many others in their time of need,” Ashe added.

Sean Bryson said he has tremendous gratitude for those who have helped him through this hard time and those who continue to offer everything they can, including current Jackson County Sheriff Chip Hall, who Bryson said has offered an abundance of support.

“I have really had to humble myself because of that,” he said. “It’s hard to accept at first. I had to accept the fact that there are a lot of people out there that would take the time to help.”

When asked what else he needs, Bryson’s humility shined through.

“I could just use a lot of prayers,” he said. “I just want to thank the community for doing all that they have.”

The benefit will begin at 2 p.m. July 31 at Waynesville’s American Legion Post 47 at 171 Legion Drive.