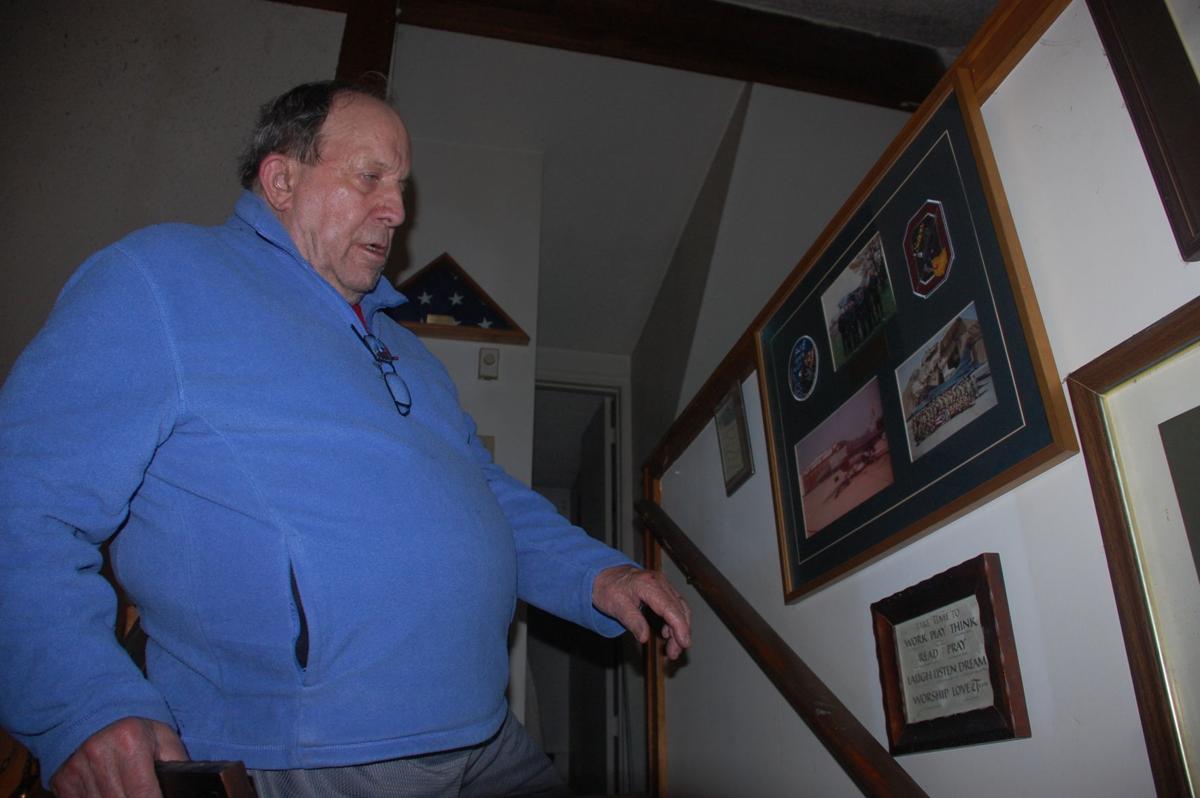 TOUGH MEMORIES — Although Coning didn’t have any photographs of his father readily available, he has a whole host of photos from his time deployed to the Middle East as an Air Force officer. 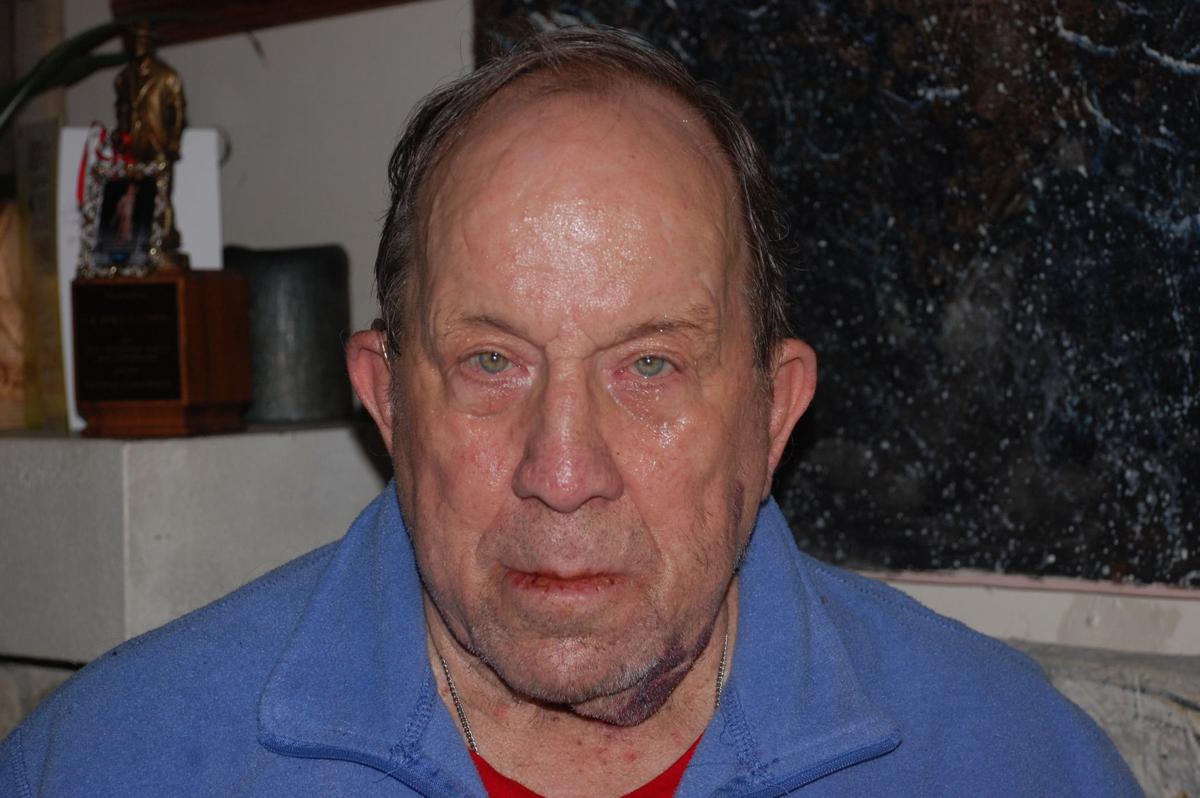 COL. CONING — This is Col. James Coning, who has spent a lot of time recently learning and thinking about his father’s involvement in the battle for Okinawa on the tail end of World War II.

TOUGH MEMORIES — Although Coning didn’t have any photographs of his father readily available, he has a whole host of photos from his time deployed to the Middle East as an Air Force officer.

COL. CONING — This is Col. James Coning, who has spent a lot of time recently learning and thinking about his father’s involvement in the battle for Okinawa on the tail end of World War II.

James Coning thinks about the Battle of Okinawa a lot nowadays.

The skirmish, which has become known as a “typhoon of steel,” has weighed heavily on Coning’s mind lately, as this year marks its 75th anniversary. The bloody battle happened to be the one time his father experienced combat in World War II, and the scars that left an indelible imprint not only on Coning’s father, but eventually on Coning himself.

Coning’s father, Lawrence W. Coning, was born in 1911 and passed away in 1976. At the age of 29, much older than the typical recruit, Lawrence Coning enlisted in the Army with no idea of how the ongoing conflicts in Europe and Asia would soon envelop the world.

“He was a chemical specialist,” James Coning, 80, said. “Not chemical warfare, but what they called ‘smoke.’ At that time they laid down smoke screens mostly for the Army troops.”

Lawrence Coning never talked much with his son about his time in the Army, but one thing James Coning knew was that his father wasn’t involved in direct combat until he reached Okinawa, where U.S. soldiers, sailors and Marines met Japanese forces for one of the most intense battles of the war.

“On Okinawa, he went in on the first wave and helped lay down a smoke screen for everybody else,” James Coning said.

Conin knew his reticent father struggled with “battle fatigue,” which is known now as PTSD, and that was about all he knew. However, one time, the senior Conin did offer a brief insight.

“He did say at one point that he carried what he called a ‘grease gun,’” James Coning recalled. “I said — and this was one of the few times I got to question him — I said, ‘grease gun?’ He said it was small, like a grease gun. It was a machine gun. He said it was the only kind of gun that you needed on that kind of an island because everything was short range. But anyway, he never said anything else about that.”

On James Coning’s dining room table is a stack of books on Okinawa so tall it appears to be on the verge of toppling. Through reading those books, he has learned the nature of the horrors experienced on that island during the two months of combat. Simply put, the allied forces tried for months to secure that crucial island faced not only a capable and determined enemy, but the elements.

“One time, they got a break and he and a bunch of other guys that were in the support role and some Marines built a dining hall with concrete blocks that they scrounged up,” James Coning said. “Had it all finished, and a typhoon came and tore it down. They didn’t have a hot meal until they finally were taken off of the island after I think 100 and some days and were on the ship and were coming back.”

Had the United States not dropped atomic bombs on Hiroshima and Nagasaki, James Coning said his father would have likely been in the first wave of soldiers to reach the Japanese mainland in that potential invasion.

“Everything I’ve read about that was the casualty rates were going to be at least 90 percent on the initial waves that go into the island,” he said. “I’ve said it hundreds of times, thank God for Harry Truman having the guts to do what he did, because if he hadn’t, I probably would have never even seen my dad.”

Coning eventually joined the military himself, and after a stint as an enlisted airman, obtained his college degree and gained a commission as an officer.

He eventually reached the rank of colonel and deployed to Kuwait and Saudi Arabia in support of Operation Desert Storm. Between that experience, knowledge gained from books about Okinawa and speaking with his friends in the Haywood chapter of Disabled American Veterans, he developed a fuller understanding of the horrors his father experienced that ended up haunting him for the rest of his life.

“He had it, because he used to talk to himself when he thought he was by himself,” he said. “He used to get very upset with himself over little things and that was not ordinarily what my dad was like. I’ve always felt, I don’t know any other word than guilty to some degree, because I never really understood what he had gone through.”

Beautifully written. Thank you for your service gentlemen. Thanks for sharing your experience and your dad’s experience.

My thoughts, too. I recommend for many former military who still seek answers to the suffering we inflict on fellow human beings a book by a Vietnam Vet Philip Beidler, Beautiful War. It is a history of attitudes to war. Also hard reading. Dr. Beidler has devoted his career to understanding and helping others understand what war does to soldiers.

Here is a link to the description and rviews of the book.

Agree-- grateful to Mr. Coning and his father. And to Mr. Perotti, also a veteran, I think. My posts below are about a Vietnam Veteran literary historian who is a friend. He wouldn't mind saying that like Mr. Coning senior he struggled with "survivor's guilt" as well as PTSD because he writes about it