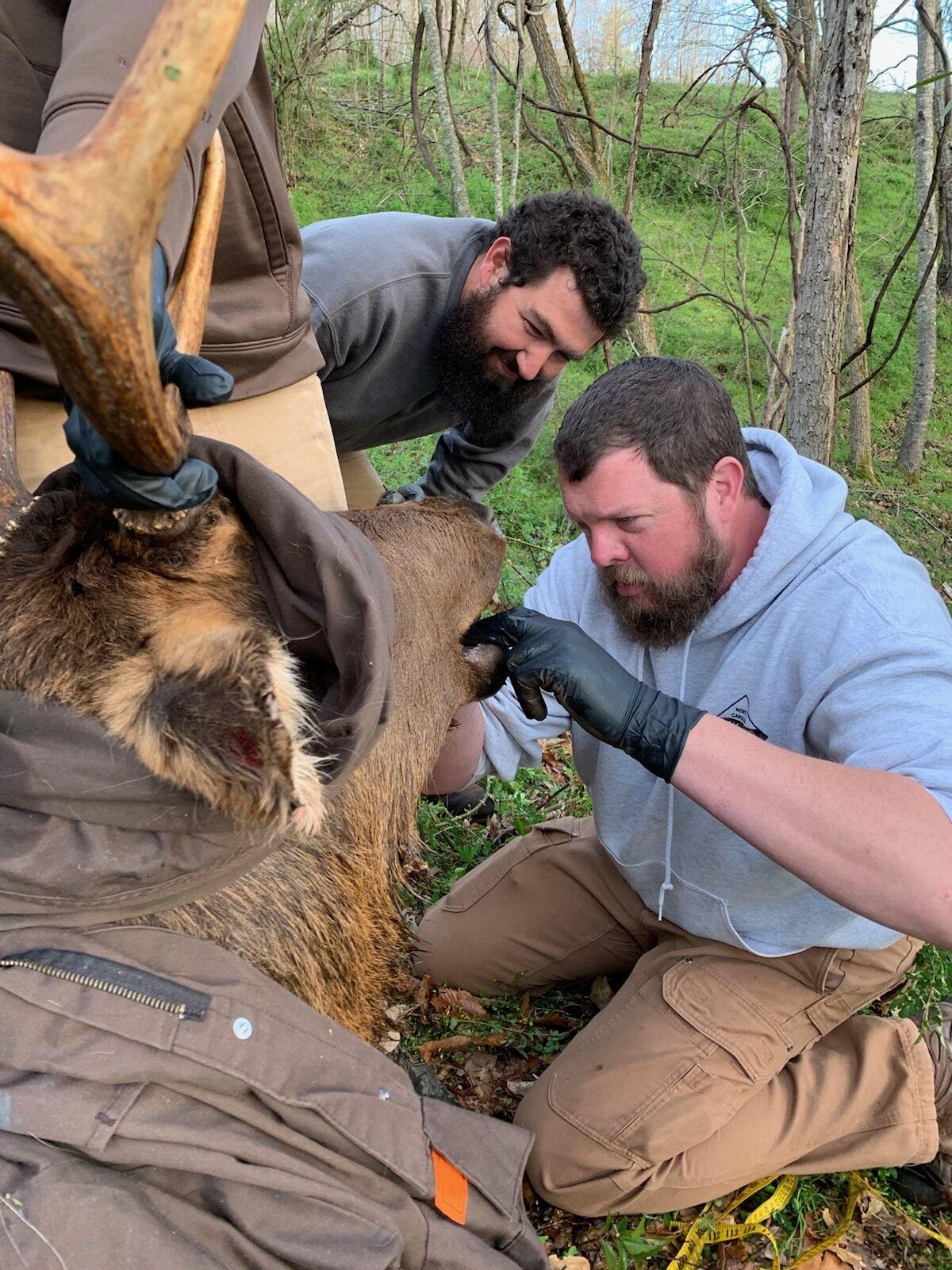 SAY ‘AAAH’ — N.C. Wildlife biologists Justin McVey (right) and Josh Sanders check the tooth wear on an elk as a way to estimate its age. 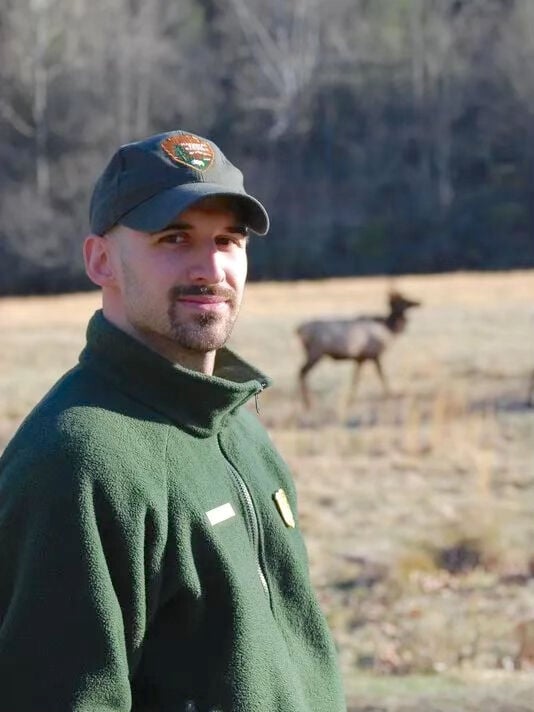 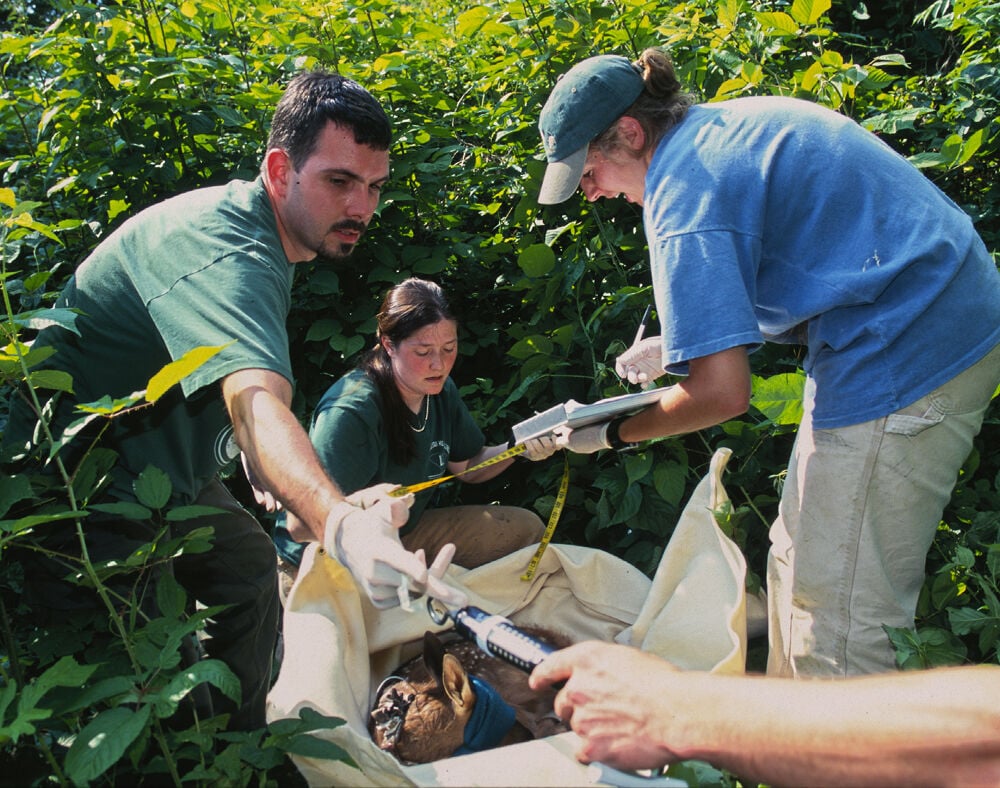 {span}Jennifer Murrow and Steven Dobey{/span}{span}, researchers with the University of Tennessee, collect data on the first newborn calf born in the Smokies in 2001.{/span} 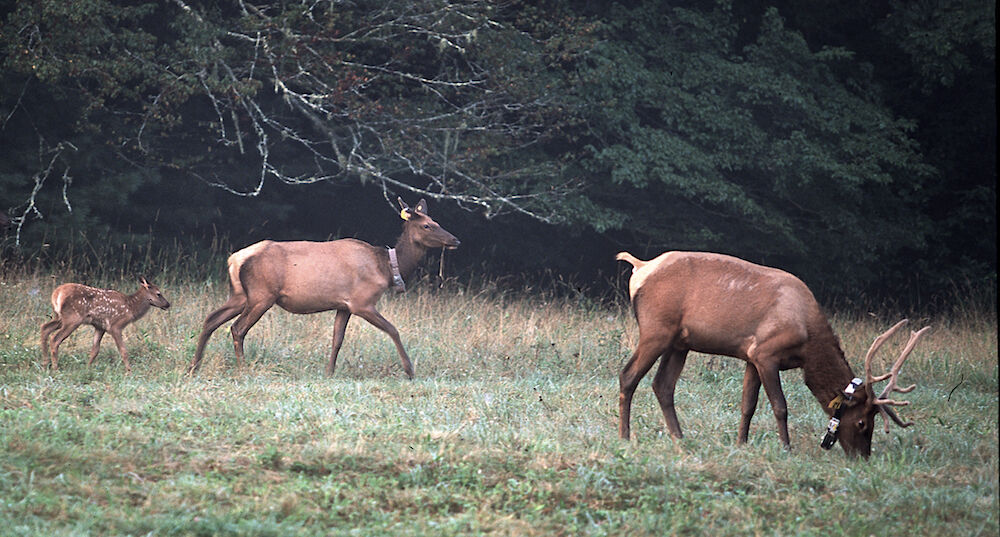 A calf keeps up with {span}m{/span}{span}omma while a male elk grazes nearby.{/span} 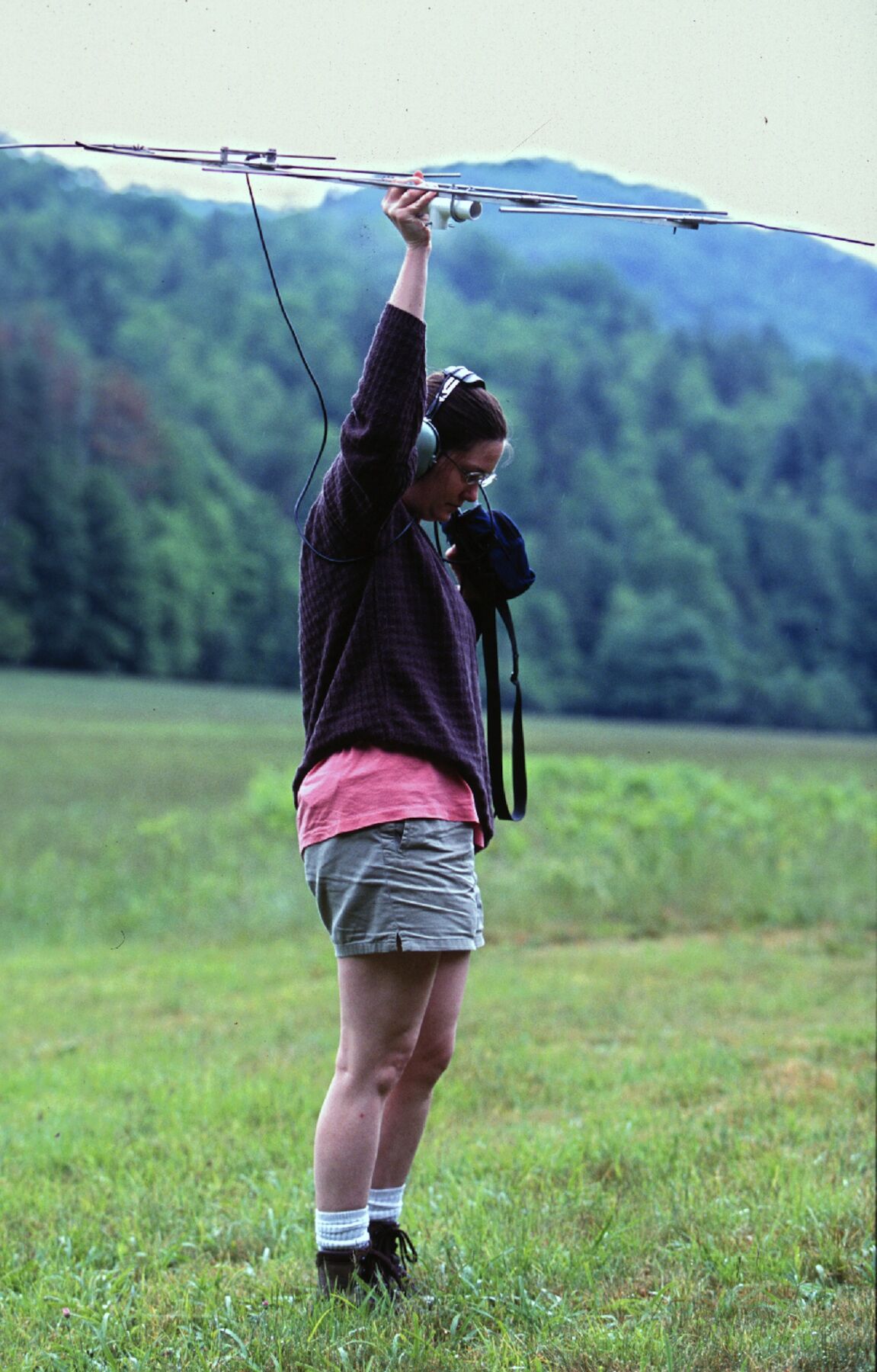 SIGNAL — Jennifer Murrow, elk researcher with the University of Tennessee, holds an antennae and listens for signals emitted from the el’’s radio collars to try to track their locations. 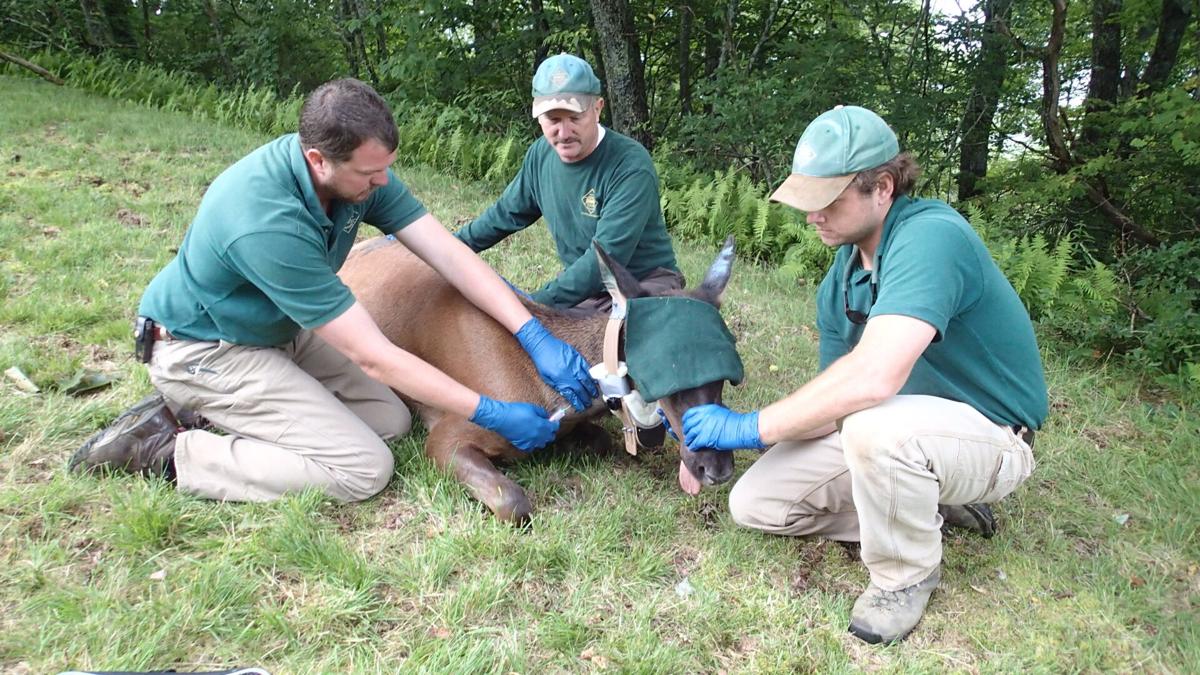 HERD HEALTH — N.C. Wildlife biologist Justin McVey (left) draws blood from an elk. When it comes to the elk outside the national park boundaries, McVey is the one who keeps tabs on herd health.

BULL — This bull elk bugles during the fall rut. 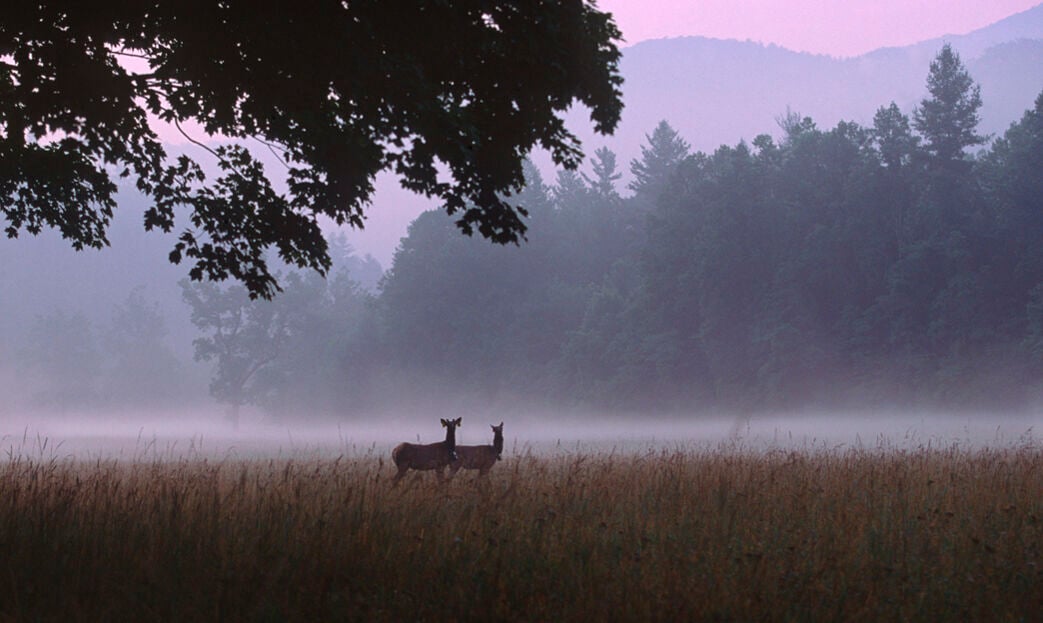 Elk at sunrise in Cataloochee.

SAY ‘AAAH’ — N.C. Wildlife biologists Justin McVey (right) and Josh Sanders check the tooth wear on an elk as a way to estimate its age.

{span}Jennifer Murrow and Steven Dobey{/span}{span}, researchers with the University of Tennessee, collect data on the first newborn calf born in the Smokies in 2001.{/span}

A calf keeps up with {span}m{/span}{span}omma while a male elk grazes nearby.{/span}

SIGNAL — Jennifer Murrow, elk researcher with the University of Tennessee, holds an antennae and listens for signals emitted from the el’’s radio collars to try to track their locations.

HERD HEALTH — N.C. Wildlife biologist Justin McVey (left) draws blood from an elk. When it comes to the elk outside the national park boundaries, McVey is the one who keeps tabs on herd health.

BULL — This bull elk bugles during the fall rut.

Elk at sunrise in Cataloochee.

A lot was riding on the fledgling elk herd brought to Cataloochee Valley 20 years ago.

The meager 52 elk were supposed to pioneer the species’ return to the Smokies. But five years in, the herd hadn’t grown a bit. It was hanging on by a thread, its future far from certain.

Newborn elk were being gobbled up by black bears, with a survival rate of only 30% — barely enough to replace the adult elk dying off each year.

“That really wasn’t going to do it for a species that was trying to get their feet under them and re-established,” said Joe Yarkovich, the lead elk biologist for the Great Smoky Mountains National Park.

Newborn elk calves were easy pickings for black bears the first few days after their birth, when their mothers would have to leave their side to graze. They were ill-prepared for the predators, as bears didn’t exist where they came from.

Something had to give, so Yarkovich spearheaded a plan to trap and move bears out of Cataloochee during calving season. Bears’ uncanny homing sense would eventually lead most of them back to their home turf within a few weeks, but Yarkovich hoped the temporary reprieve would be enough.

“The question was, ‘Can we move enough bears out of Cataloochee temporarily to boost the calves’ survival numbers?’” Yarkovich said. “It was all trial and error.”

Miraculously, the newborn survival rate skyrocketed to 85%. But it wasn’t a long-term solution.

“We couldn’t keep moving bears forever. The elk had to be able to make it on their own,” Yarkovich said.

After three years of giving the elk a helping hand with the bears, park rangers crossed their fingers and sat back to watch.

“We expected calf survival to go back down,” he said.

But it didn’t. Like a page right out of the Darwinian playbook, the mother elk had wised up. They hid their newborns better and actively ran bears off.

“They became much more defensive once they realized those predators were out there,” Yarkovich said.

Yarkovich recalls one mother in particular who gave birth to her first calf in the open fields of Cataloochee, and a bear got it.

The next year, she ventured into the tree line at the edge of the field. But the bears were learning too, and discovered they could watch when the mothers left their calves to graze or to get water. Her second calf was a goner, too.

The third year, the elk wasn’t taking any chances. She trekked seven miles out of the valley to Balsam Mountain to give birth, and her calf survived. In later years, her offspring and their offspring in turn followed suit, returning to the high-elevation calving grounds.

“You could see the behavior evolve in front of your eyes,” Yarkovich said.

The bear problem wasn’t the only challenge during those early years. Making matters worse, the first crop of elk to arrive had more males than females, limiting the herd’s reproduction initially.

“To compound that, the few calves that were surviving were mostly male, too,” Yarkovich said.

Aside from purely natural causes, a parasite and car crashes were taking their toll on the elk herd.

And there was another tough blow, as well. The reintroduction plan had called for releasing three batches of elk — 25 a year for three years. The first two came from Kentucky and Canada.

But before the third tranche could be brought it, fears over chronic wasting disease that was ravaging deer populations elsewhere in the country led to a ban on importing hooved animals into the state. There would be no third batch.

Jim Blyth of Maggie Valley, who helped champion the elk reintroduction, admits to being nervous.

“When we had 52 elk and no net gain over a five-year period, it shows you how fragile this whole ecosystem is when it comes to the elk,” said Blyth, a member of the Rocky Mountain Elk Foundation that made the elk release possible.

How many are there now?

Despite the rocky start, the elk have successfully made themselves at home here, expanding their range well beyond Cataloochee’s borders. There’s more than 200 elk in the region, with satellite herds from Maggie Valley to Cherokee.

But figuring out just how many elk there are is flummoxing wildlife biologists. Every year, Yarokovih teams up with his elk counterparts at the N.C. Wildlife Resources Commission and the Eastern Band of Cherokee to do an elk count.

During the counts, McVey trolls the stomping grounds where pockets of elk are known to frequent, but it is hit or miss.

“I knew from being on the ground for so many years how many were associated with the various little subherds, but I couldn’t get to them,” he said.

So they wouldn’t be counted.

Out West, elk counts are done by air. Despite the Smokies’ dense tree canopy, McVey thought he’d give it a try one year. He waited for a good snow and went up in a biplane, hoping to spot the contrast of elk against the white ground without leaves on the trees. But it still didn’t work.

Now, a new effort is underway in cooperation with the University of Tennessee in Knoxville to get a handle on the elk population using DNA samples from elk droppings. Droppings are collected from random sampling plots and taken to a lab at U.T. for analysis. The number of unique DNA markers that turn up indicate how many individual elk there are.

“We wanted something that was a little more scientifically rigorous than the visual count,” McVey said of the project, being led by U.T. grad student Jessica Braunstein.

Knowing how many elk there are is crucial to being able to manage the species long-term. Back in the 2000s — after getting over the hump of bear predation — the park service faced a big decision: could the elk graduate from the status of “experimental release” to an official reintroduction?

“It showed a slow but continuous growth, which is exactly what we want. You don’t want really rapid growth, because the whole ecosystem doesn’t have time to adjust,” Yarkovich said.

Those models have turned out to be spot on.

In the future, an accurate elk count will serve another purpose — determining whether they can be hunted. If and when that day comes, the Wildlife Commission will have to decide how many elk permits to give out each year.

It would likely only be a handful, based on a lottery system. While Blyth hopes he lives long enough to see that day, he’s not sure he will.

“I’d like to see us have a sustainable herd before you start thinking about that,” Blyth said.