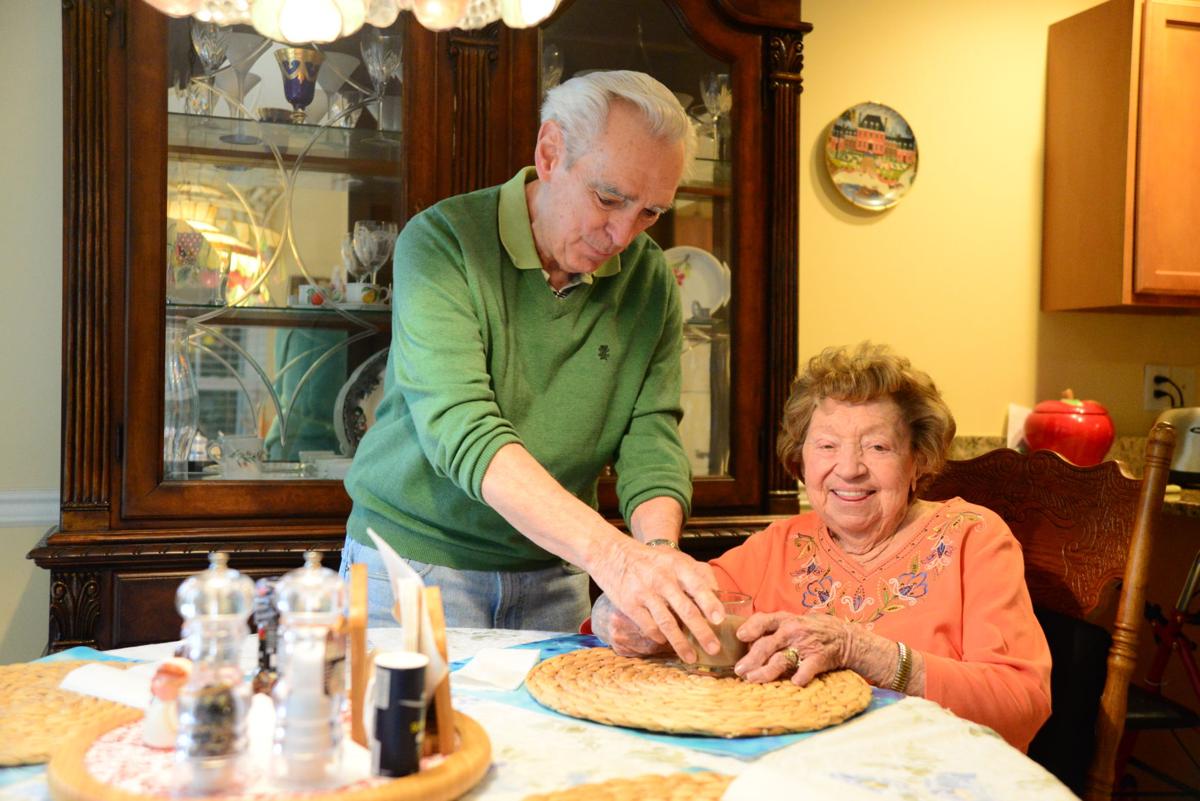 SIMPLE PLEASURES — Joe Colletti helps his wife, Joy, whose vision has failed, find the cup of coffee he places in front of her. After 59 years of marriage, every day is Valentine’s Day. 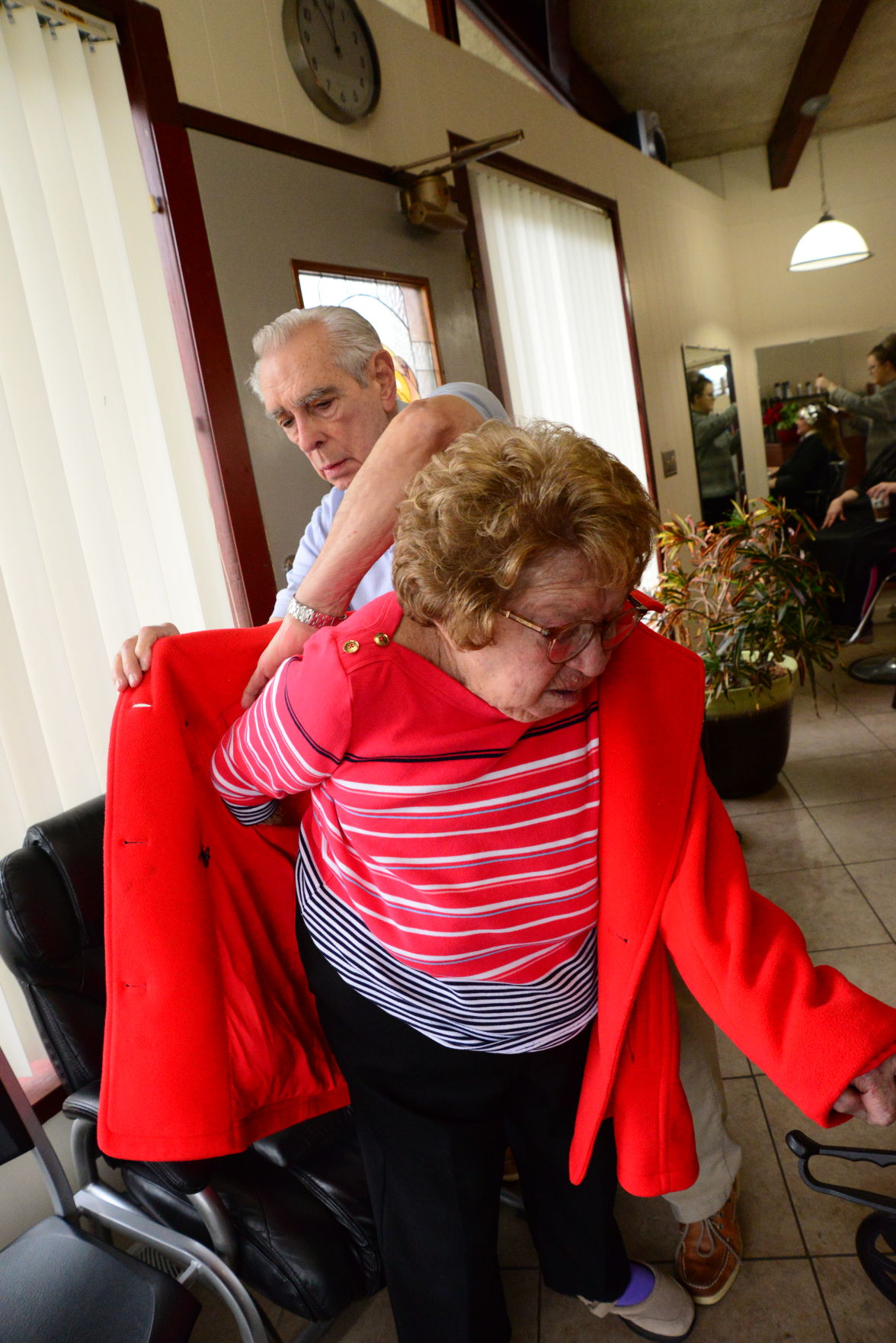 LOVING HANDS — Joe Colletti helps Joy with her coat during their weekly visit to the beauty parlor. 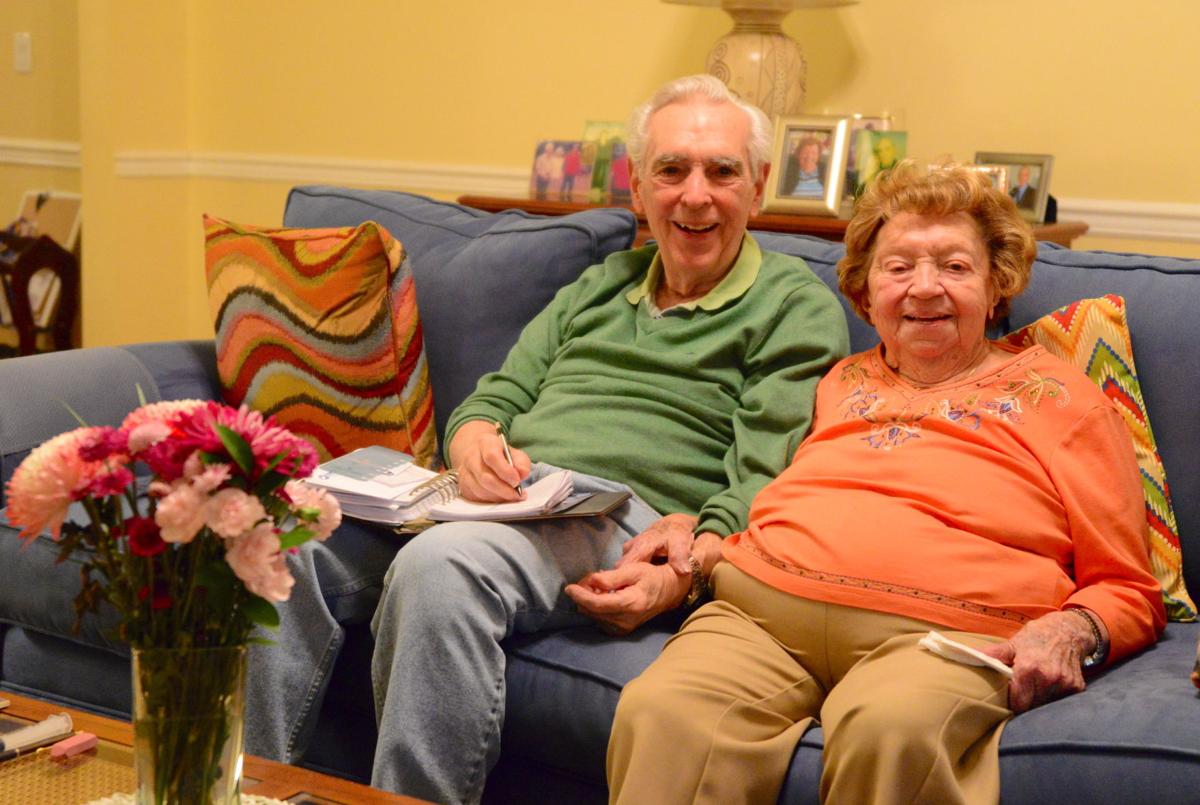 ROUND THE CLOCK — Joe keeps a day planner and daily to-do lists to stay on top of caring for Joy, from her doctor’s appointments to shower schedule. 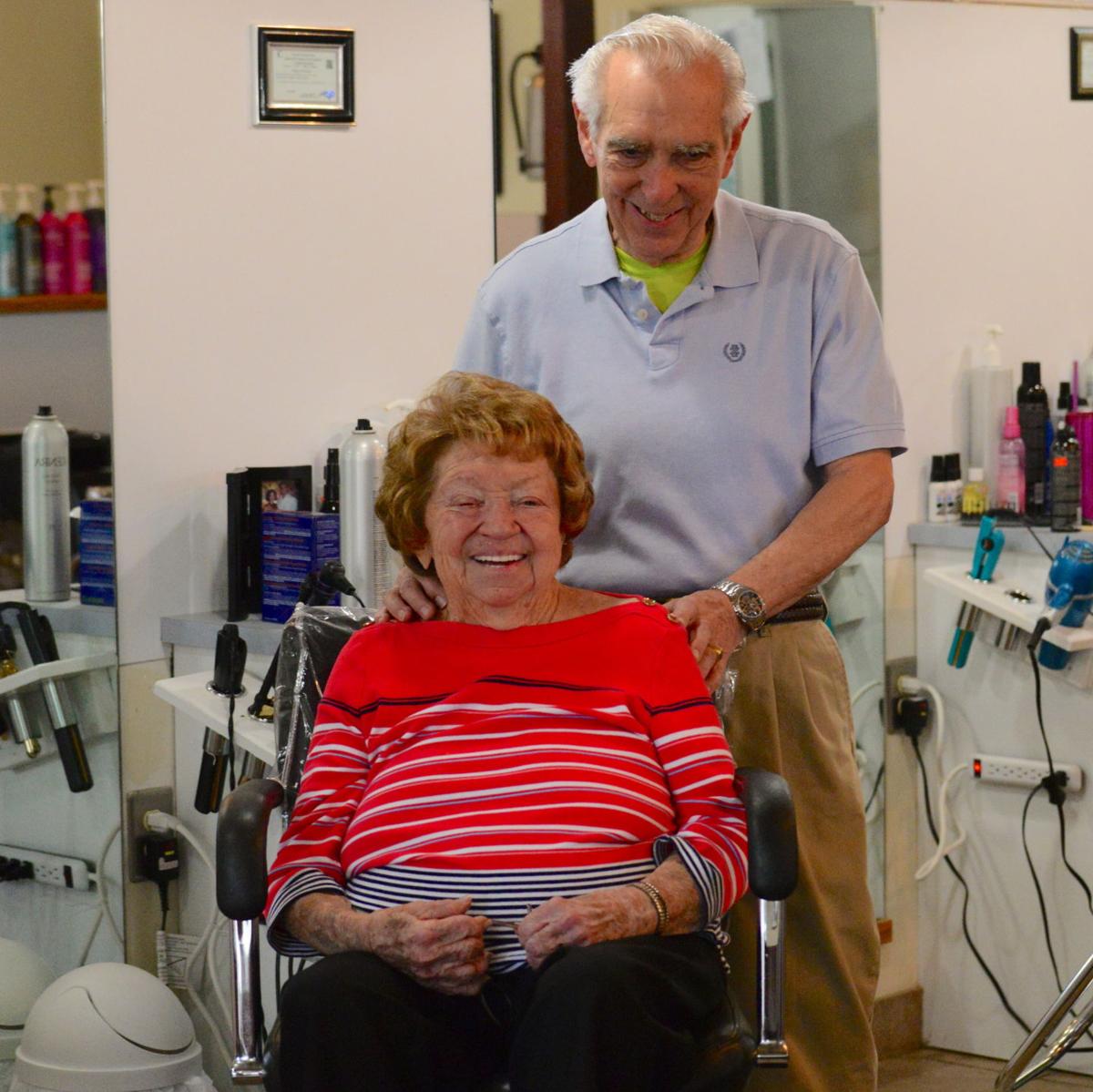 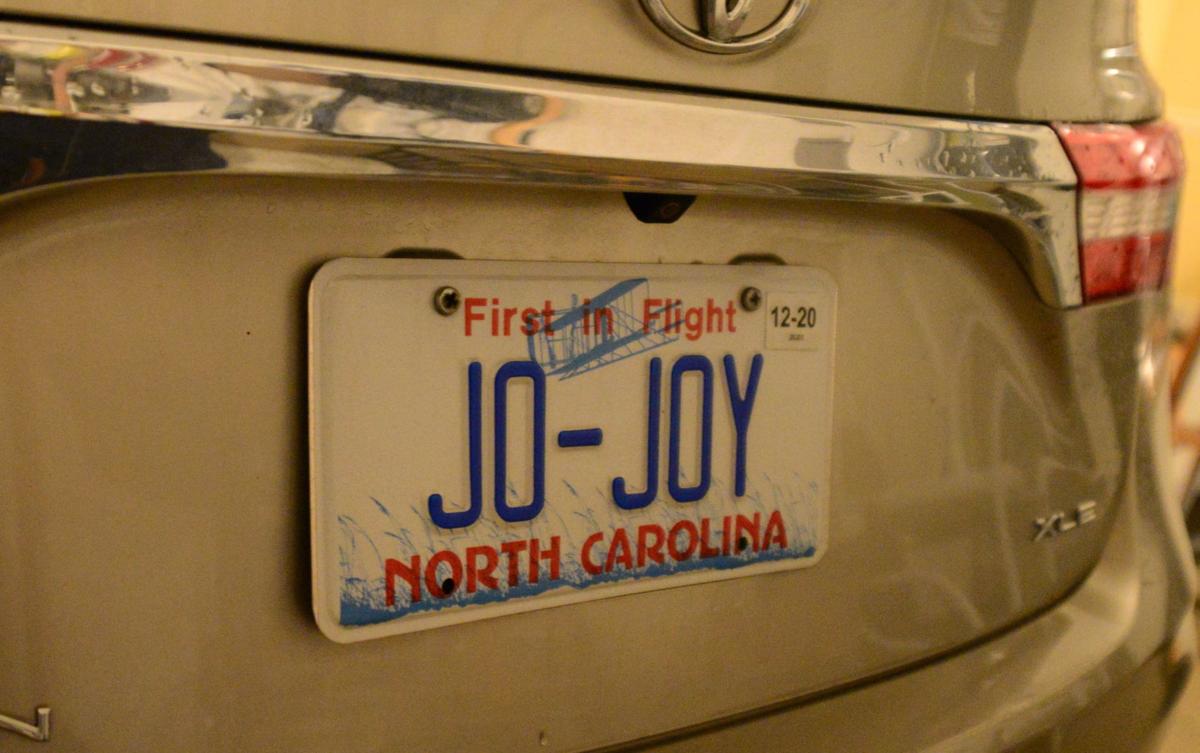 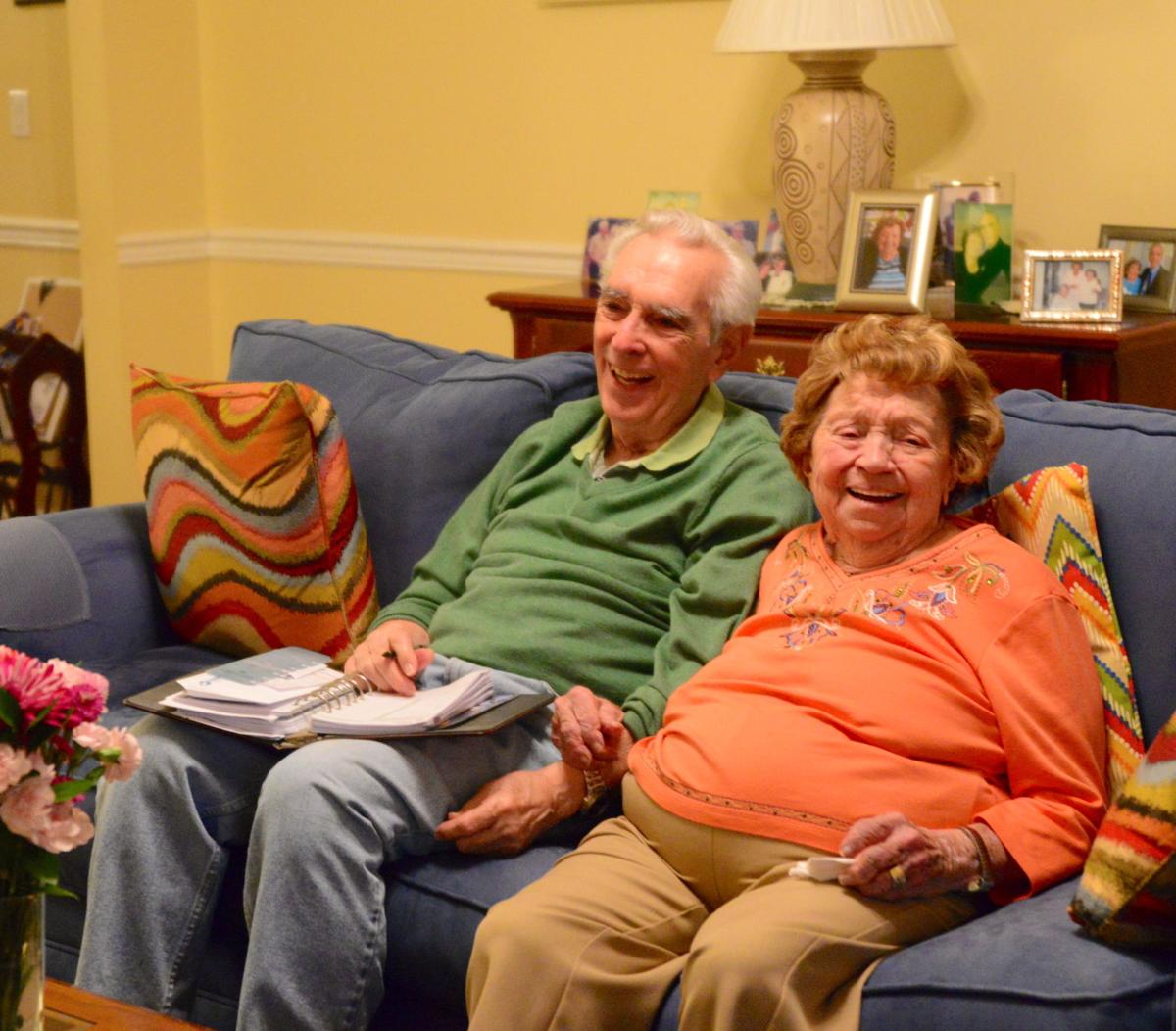 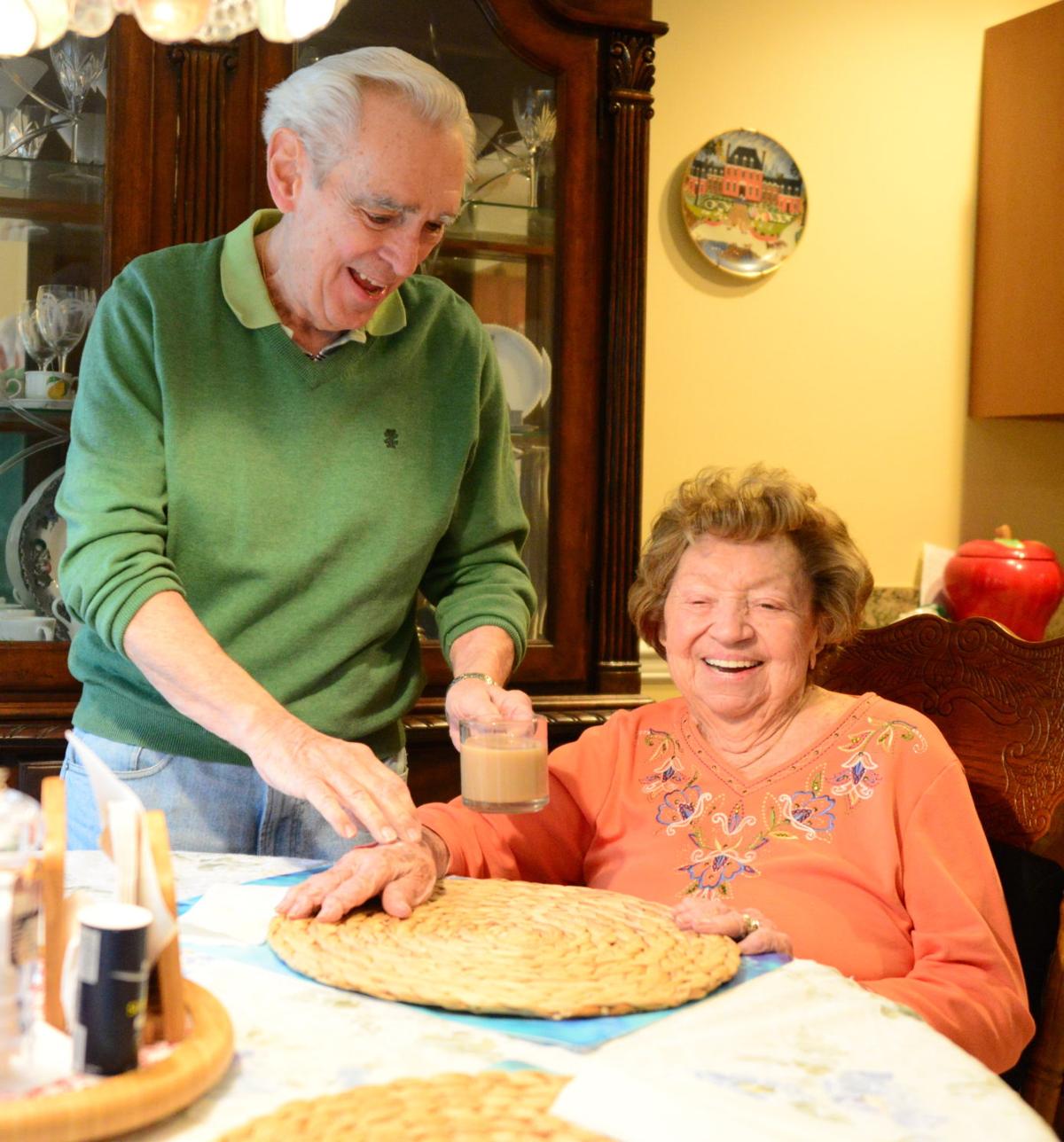 SIMPLE PLEASURES — Joe Colletti helps his wife, Joy, whose vision has failed, find the cup of coffee he places in front of her. After 59 years of marriage, every day is Valentine’s Day.

LOVING HANDS — Joe Colletti helps Joy with her coat during their weekly visit to the beauty parlor.

ROUND THE CLOCK — Joe keeps a day planner and daily to-do lists to stay on top of caring for Joy, from her doctor’s appointments to shower schedule.

Valentine’s Day will begin like any other for Joe Colletti. He’ll wake Joy up around 8 o’clock, get her out of bed, tug on her robe and help her shuffle to the kitchen table, where he’ll make her the first of many cups of coffee for the day.

“She’s a coffee nut. Whenever we’re in the hospital, I tell the nurses, ‘You want to keep her happy? Bring her coffee,’” Joe said.

Next, he’ll get his paper and pen for the morning ritual of the day’s to-do list. It doesn’t take much to keep up the couple’s two-bedroom condo in Clyde, but he bites off a little each day so the housework doesn’t pile up. The kitchen floors on Monday, dusting on Tuesday, laundry on Wednesdays.

After 59 years of marriage, Joe doesn’t need to buy Joy a Valentine’s card to show her how much he loves her. Their vanity license plate that reads “Jo-Joy” has that covered.

As for flowers? The bouquet he bought from the grocery store last week is still looking fresh as ever and should do the trick. Although Joy’s vision has been taken by macular degeneration, she can still make out the colors, and most importantly, she knows they’re there.

“She was feeling low, so I felt like it would pick up her spirits a little bit. I do that whenever I feel like she’s getting a little depressed,” Joe said.

He’ll no doubt cook Joy a nice Valentine’s dinner, but he does that every day anyway — his payback for the decades of cooking Joy did for him.

“Joy was a fantastic cooker. When she started to lose her eyesight, I figured I was going to starve,” Joe said. “So I brought her into the kitchen one day and put her a stool and said ‘Joy, you’re going to start teaching me how to cook.’”

For the past 13 years, Joe, 89, has been caring for Joy, 93, like royalty — through her failing health, her loss of vision, her revolving door of surgeries, her onset of dementia.

“I would never get rid of him. He is awfully good to me,” Joy said.

The daily routine of bathing and dressing, cooking and cleaning, putting in her hearing aids and dentures, keeping up with doctor’s appointments and weekly beauty parlor visits, have become second nature for Joe.

“I just put my big boy pants on and go on,” said Joe, in his thick Italian Bronx accent. “If she passes away, I’ll have to go get two full-time jobs just to keep myself busy.”

The couple never had children and nearly all their friends have passed away, so they’re all each other has left.

“This is what I got, so I cater to her all the time. At this stage, I just never know when we aren’t going to be together,” Joe said.

The thought weighs on Joe heavily. He is fighting his own battle with prostate cancer now, and his biggest fear is what will happen to Joy if he dies first.

“She told me the other night when I was putting her to bed, she said ‘Please don’t die and leave me alone,’” Joe said. “We’ve always taken care of each other. Between the two of us, we’ve had 27 major operations.”

Joe recently ordered a CD that has his new favorite song it, a jazz number called “You and Me Against the World.”

“It reminds me of her and me. It says ‘When one of us is gone, and one of us is left to carry on,’” Joe said, tearing up slightly as he shared the lyrics.

Adjusting to a new life

Joe and Joy both grew up in the Italian neighborhoods of the Bronx, and lived on Long Island most of their life before moving to Florida. They always vacationed in Maggie Valley, spending a week here every spring and fall.

So when she began to lose her vision to macular degeneration, Joe knew it was now or never. They were 75 and 79 when they moved to Haywood County, finding a cozy condo in Clyde to live out their retirement years.

“It was hard because you had to start over,” Joe said.

Joe began going to Haywood Regional Health and Fitness Center to stay fit enough to care for Joy, but it soon became the epicenter of his social life.

“It took you a long time before they accepted you,” Joe said. “But now, I walk in and everyone says ‘Hey Joe? How you doing? Where the hell you been? We hadn’t seen you in a week.’”

Since Joy’s eyesight was already failing when they moved to Haywood County, the decorating was left mostly to Joe, and Joy likes to kid him about what’s on the walls.

As Joe and Joy settled in to their new life, Joe began learning the ropes of running a household, and discovered he not only had a knack for cooking, but luckily, he enjoyed it.

His first cooking lesson from Joy was split-pea soup. She talked him through dicing the garlic, cutting the onion, and sauteeing it. As Joe got better, they began tackling some of Joy’s signature dishes, like eggplant parmesan and homemade Italian sauce.

“I would always ask her, what is it missing? How is it?” Joe said. “I still do that now. If I’m making chicken parm, I cut off a piece of chicken after it’s all breaded and say ‘OK how is it?’ If she says it’s good, I start fixing the plate.”

Only cooking for two, it’s easy to end up with too much, however.

“Sometimes she doesn’t want to eat a lot, so I have to pull back,” Joe said.

He invested in a vacuum sealer and keeps the freezer stocked with ready meals. He even makes their own salad dressings.

One of his favorite pastimes is trolling the internet for new recipes, printing them out and slipping them into plastic sleeves in his three-ring recipe binders, each one indexed with tabs according to main ingredients.

Staying organized is a bit of an obsession for Joe. He keeps three appointment books, each of them identical. One for the car, one for the house and a back-up — just in case.

If they’re at the doctor’s office making the next appointment, he grabs the planner from his car to write it down, and later transfers it to the day planner at home.

Joe’s also had to learn to shop for women’s clothes. Even though Joy’s 93 and housebound, he likes to treat her to new outfits. He’s learned his way around Belk, with Alfred Dunner and Kim Rogers being his go-to brands.

“I can fall back on those because I know if it’s that brand, what size will fit,” Joe said.

As the couple settled in for their afternoon coffee, Joe cut a slice of store-bought coffee cake and delivered to Joy’s place at the table.

“Thanks, I just made it. See, I burnt my finger taking it out of the oven,” Joe quipped.

The friendly banter goes on like this all day. Finding humor in aging is what keeps them going.

“You don’t want to take a picture of that,” Joy said, lifting her arm to her face like a trunk and trumpeted with a chuckle.

As Joy tipped the last sip of coffee to her lips, Joe rose to fetch the pot.

Joe prides himself on his Italian ancestry, and not just any Italian ancestry. He’s Sicilian, known for their passion and temper, which will flare from 0 to 60 if he doesn’t like how someone treats Joy.

During an emergency hospital visit while the couple was still in Florida, the nurses made the mistake of parking Joy’s gurney in the hallway of the ER. They didn’t have space to get her into a room, they explained.

“I said ‘Fine,’ and I took her bed and started dragging her into an elevator. They said ‘Where you going?’ I said ‘I’m going home, and you can’t stop me. The only way I’m staying is if you find her a room,’” Joe said.

Joy is cognizant enough to realize caring for her round the clock must take its toll on Joe. But he won’t hear of it.