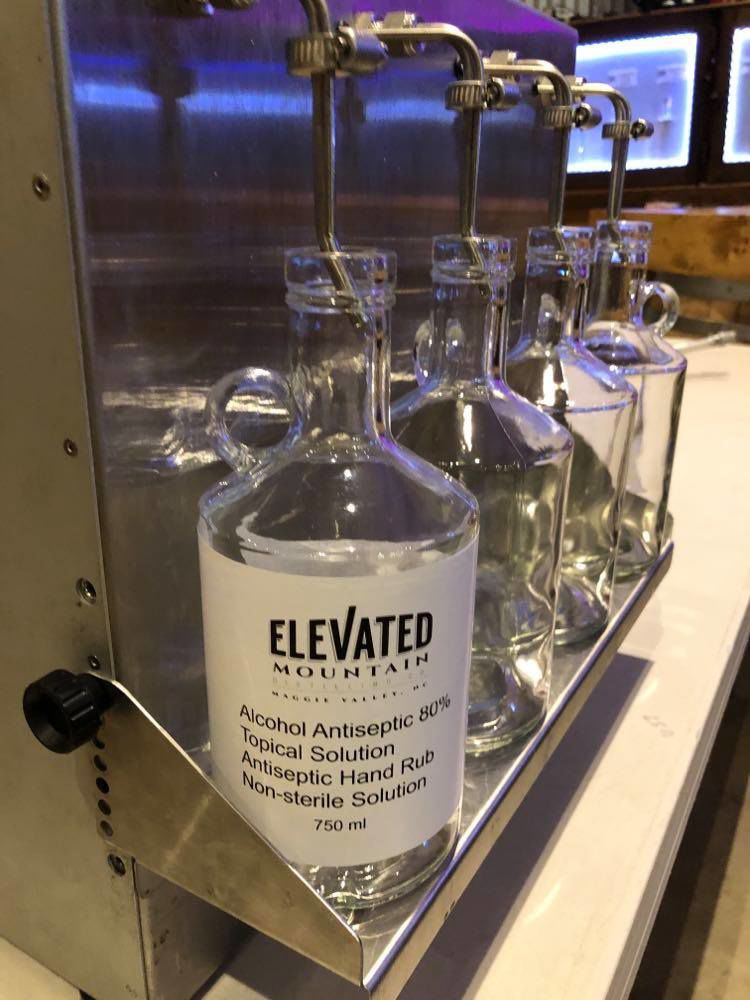 BOTTLED UP — Although this bottle may seem familiar to those who enjoy Elevated Mountain Distilling Company’s regular spirits, the label will require a double-take. 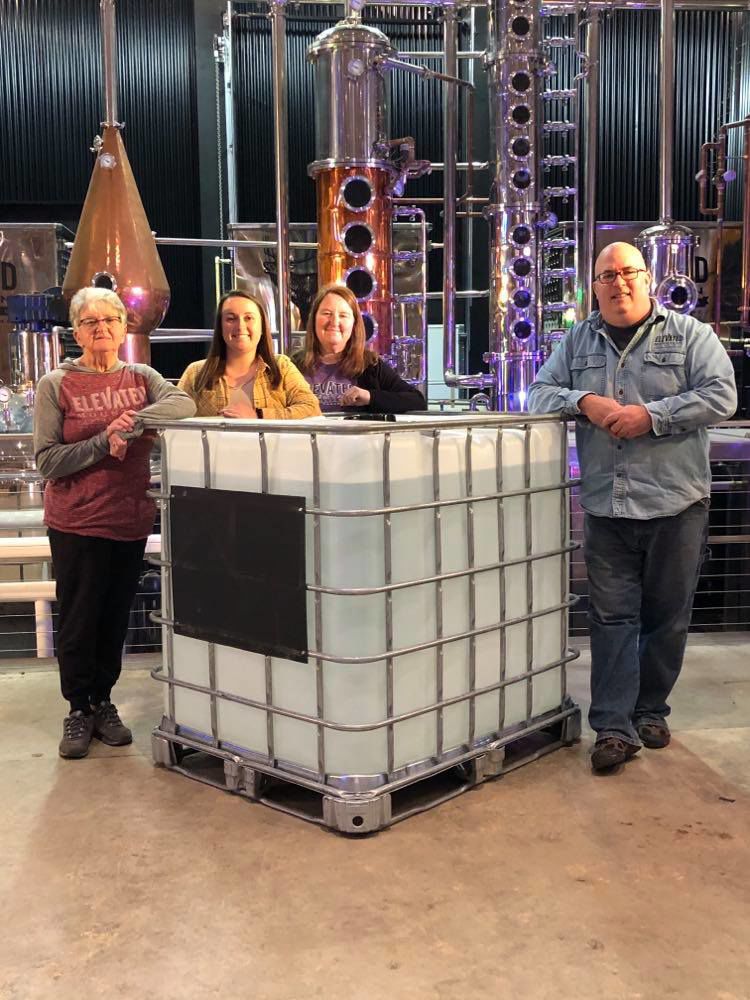 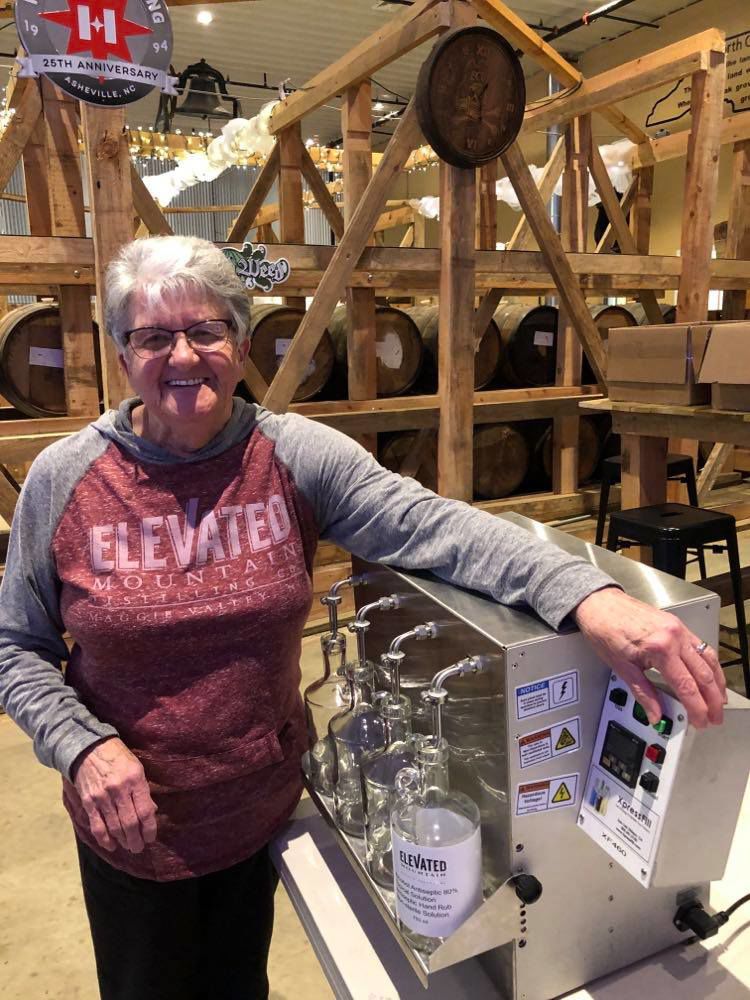 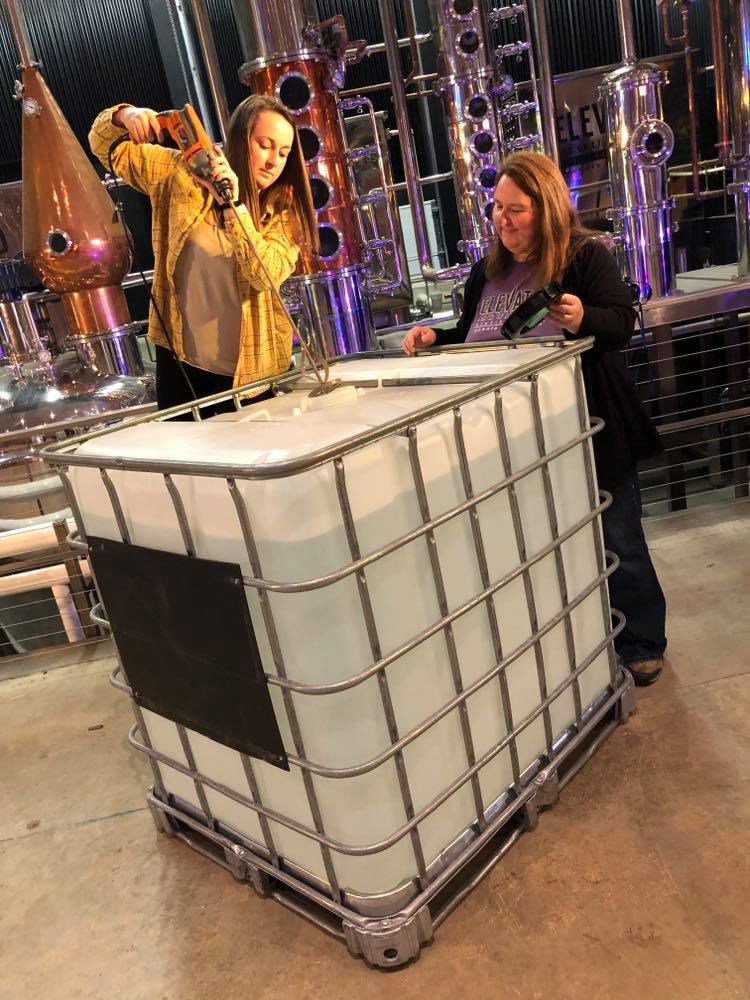 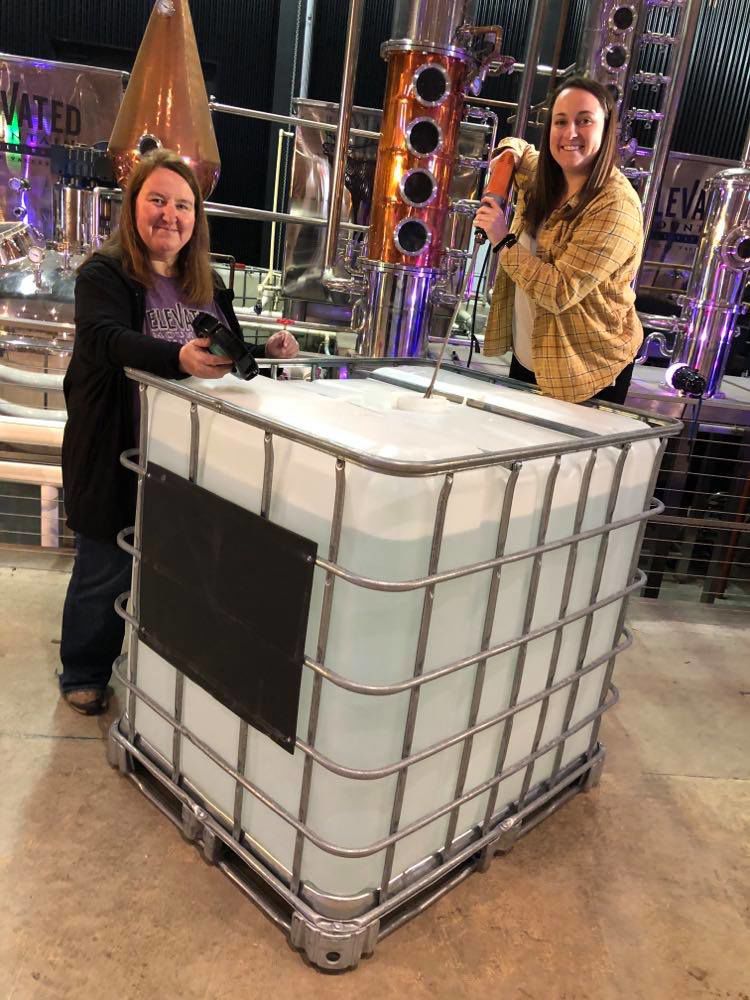 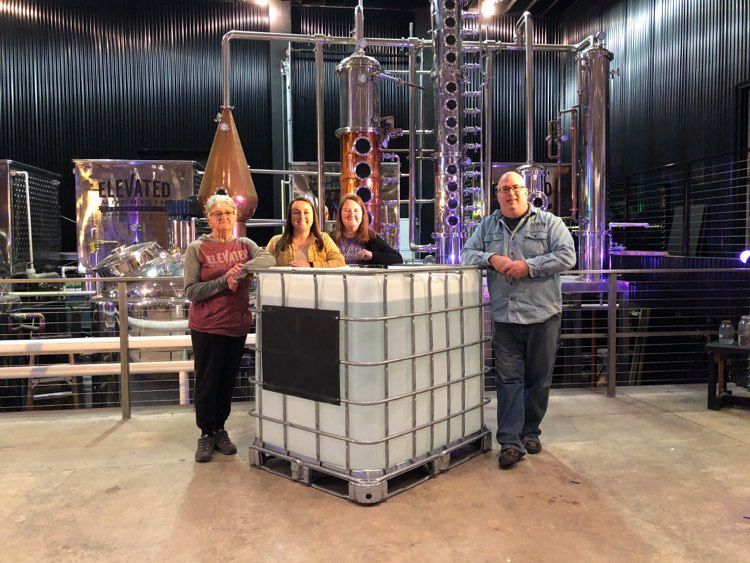 PUTTING IN WORK — From left, Joyce Cochran, Sue,Elizabeth and Dave Angel are preparing to blend some of Elevated Mountain Distilling Company’s newest product.

BOTTLED UP — Although this bottle may seem familiar to those who enjoy Elevated Mountain Distilling Company’s regular spirits, the label will require a double-take.

PUTTING IN WORK — From left, Joyce Cochran, Sue,Elizabeth and Dave Angel are preparing to blend some of Elevated Mountain Distilling Company’s newest product.

MAGGIE VALLEY — Haywood County’s lone distillery is getting out of the liquor business, at least for a while.

In response to the coronavirus outbreak and the resulting shortage of crucial medical supplies, Elevated Mountain Distilling Company has shifted its production from liquor to hand sanitizer.

While the company made the news public Friday night, owner Dave Angel said the decision was made Wednesday when the FDA temporarily changed guidelines prohibiting manufacturers of spirits from producing alcohol-based hand sanitizer.

“A lot of people have seen distilleries making itty-bitty batches and having some that they were handing out in their stores last week, but honestly, that was completely illegal,” Angel said.

Game onOnce word came down that it would be legal for distilleries to change gears to help a virus-threatened economy, it was game on in Maggie Valley.

“They actually sent a World Health Organization recipe for hand sanitizer … it was how to make two gallons in a remote lab,” Angel said. “The feds said, ‘do not add to or change the ingredients. Don’t deviate from the recipe other than scaling it to your capability.’ With that guidance, we realized we can do it, and we can do it in a big way.”

Angel said he thought for a few days about producing hand sanitizer at Elevated Mountain, considering the well-reported shortage of the vital product.

“There are so many organizations that want it now, and it just isn’t there,” Angel said, noting the need was particularly acute in the healthcare industry. “We need big volumes. We have lots of people to take care of. These are the people that keep things moving and keep us safe. That’s our priority now, and we can’t even meet that.”

Angel, like many others, initially had no clue about the massive shortages that would result from the coronavirus threat.

“I didn’t even see this coming two weeks ago,” he said. “That would have never entered my mind. When we looked at it we said this is something we can do. This meets a need, and we’re able to meet it.”

Angel explained the process to make hand sanitizer. Basically, he said it comes down to blending a few chemicals.

“The most important chemical is one we do produce, and that’s ethanol, which most people think of as alcohol,” he said. “It has to be 96 percent ethanol, which makes it 192 proof. That’s about as high as you can make it as a straight, high-end spirit.”

The other ingredients added are simply glycerin, hydrogen peroxide and water.

“That’s really the ingredients,” Angel said. “Glycerin helps to reduce the evaporation of alcohol out of the product, and the hydrogen peroxide basically heals any bacterial spores that might be present in the sanitizer before it’s actually used.”

Angel said he has somewhere between 1,500 and 2,000 empty liquor bottles on-hand that can be used for hand sanitizer. But at this point, production is limited by the raw materials needed to make the product that must be outsourced, such as glycerin, which Angel said has been in short supply globally.

However, if Angel was able to get his hands on all the materials he wanted, he could contribute quite a bit.

“If we can find all the materials needed, we can churn out 1,000 gallons a week,” he said, adding that if he produces that amount, he may even have to outsource some of the ethanol needed.

Help from friendsAngel said he hasn’t nailed down yet quite how he will sustain his business financially, considering hand sanitizer manufacturing offers slimmer profit margins and is usually produced in bulk. However, with a little help from his friends, Angel said it is still all coming together.

“Knowing this is a financial crunch and a tough time, I reached out to the Haywood County Chamber of Commerce, and I need help to make some of this happen, to find the cashflow to make this happen,” he said.

Angel said that CeCe Hipps, executive director of the Haywood County Chamber of Commerce, was quick to offer the help he needed, as was the Haywood Advancement Foundation.

“They backed our ability to make that happen,” Angel said. “It was quick and seamless. Haywood Advancement Foundation realized this is something that we need to make happen, and they could do it.”

Hipps said that providing resources during “good times and challenging times” is what the chamber does every day.

“Connecting Dave Angel of Elevated Mountain Distillery to resources was a highlight during a week of constant change,” she said.

“I would like to thank Mark Clasby and chairman Ron Leatherwood of Haywood Advancement Foundation in their ability to be nimble and quick in providing assistance as well, during this unprecedented time,” Hipps added.

Finally, Angel also wanted to thank Green Orchid Soap Company for its help. When he began looking into options for producing and packaging hand sanitizer, he quickly realized there was also a worldwide shortage of hand-pump bottles to dispense the sanitizer.

“I reached out to them, and without hesitation, they said, ‘here’s where to look for hand pumps,’” Angel said.

What about the liquor?Of course, while producing hand sanitizer to do his part to help in the fight against the coronavirus pandemic, Angel’s liquor stock will dwindle to some degree. Along with what he has aging in barrels now, Angel said he has a limited amount of his products available.

Like other businesses, Elevated has shut its doors to customers wishing to visit, meaning the highly popular distillery tours are no longer being offered.

Angel said he has been speaking frequently with Asheville’s H&H Distillery — which will also shift production to hand sanitizer — about learning new sources for important chemicals that must be outsourced.

Angel said he’s still waiting on some of the raw ingredients he needs but expects to begin working on a regular production schedule within a few days.

“Our goal right now is to produce as much as we can,” he said, adding that he believes production may have peaks and valleys depending on the availability of those raw materials.

Angel, who is a staple in the Maggie Valley and Haywood County communities, said he is thrilled to have the opportunity to help during such a trying time.

“This is a time to see what we can all do and how we can do it, and do it in a safe way,” he said. “You see that everywhere. You see the local teachers delivering meals to kids right now, and there are all the volunteers helping them to make those meals. It’s that kind of spirit that just makes you love where you live.”