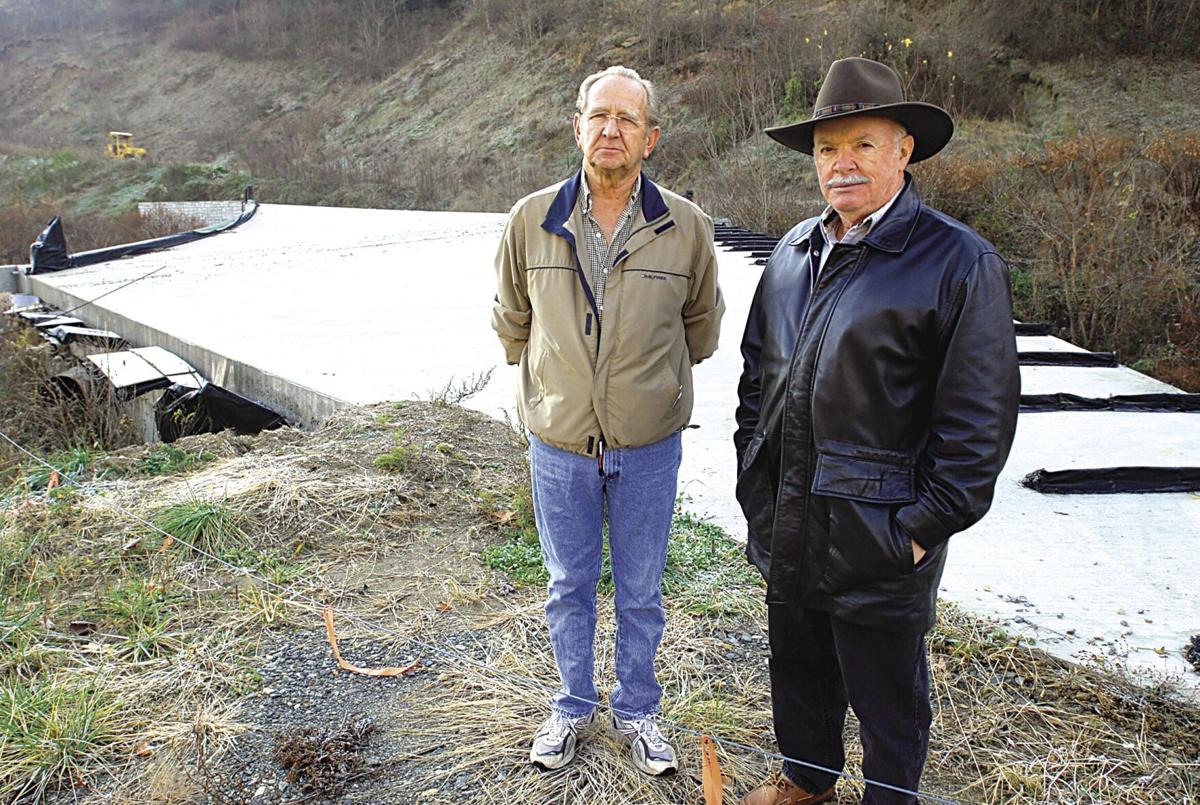 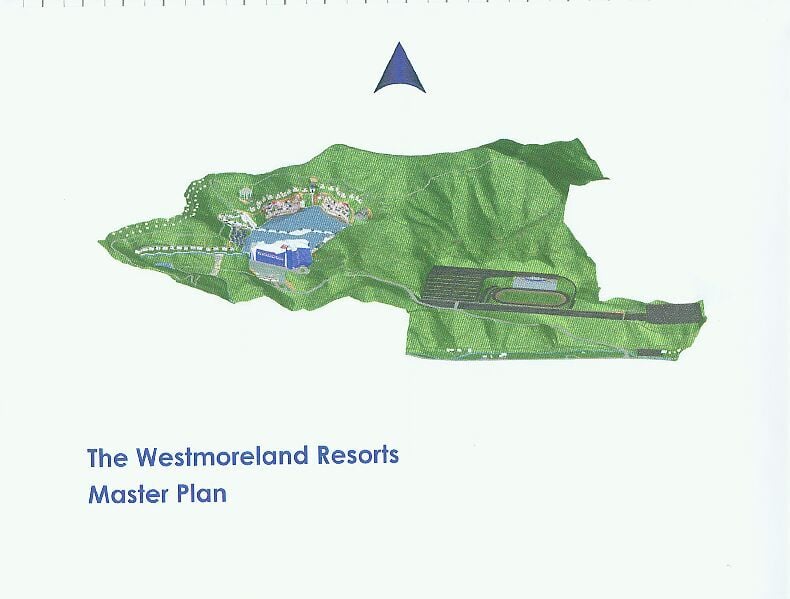 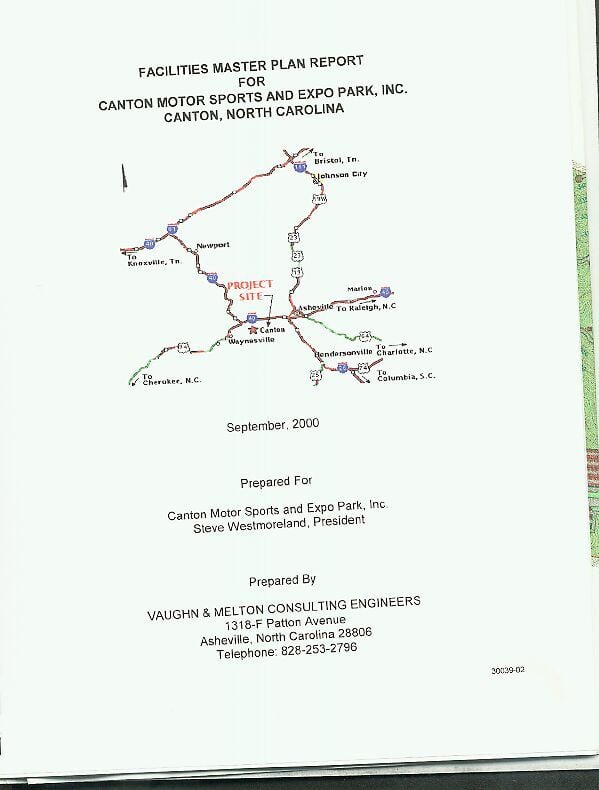 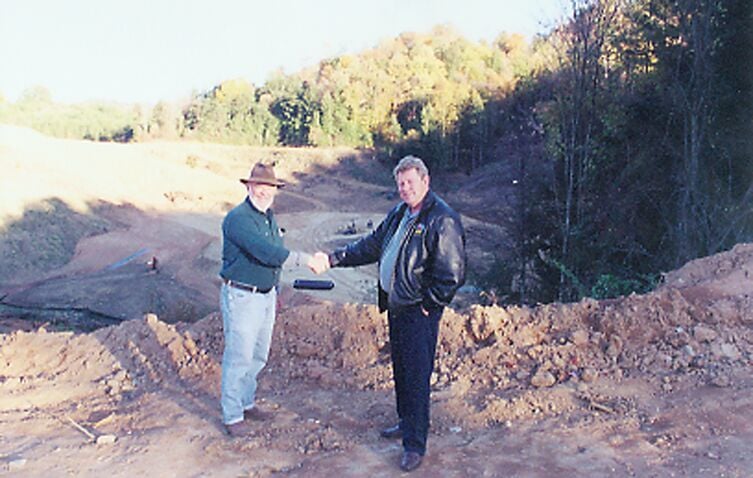 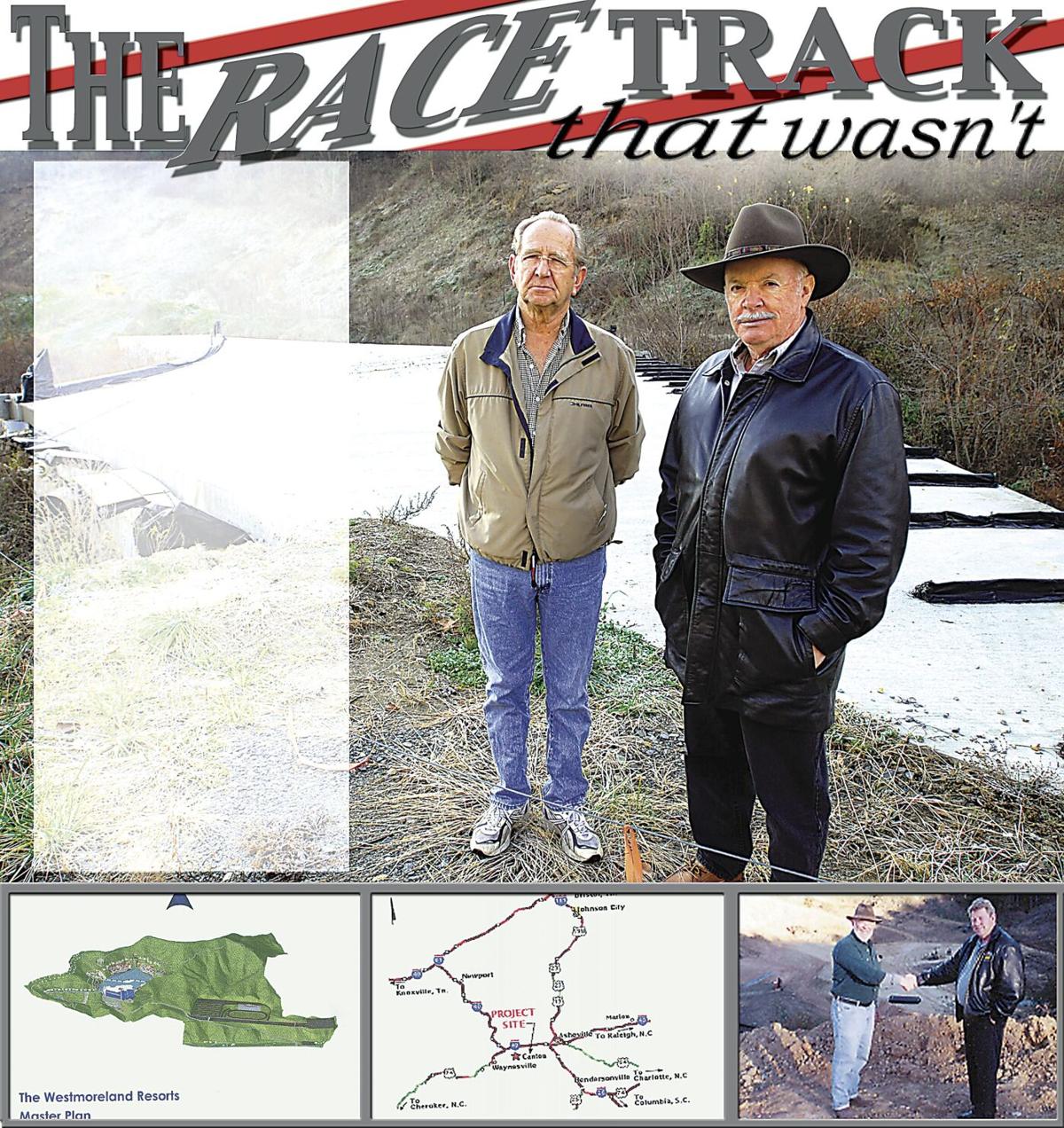 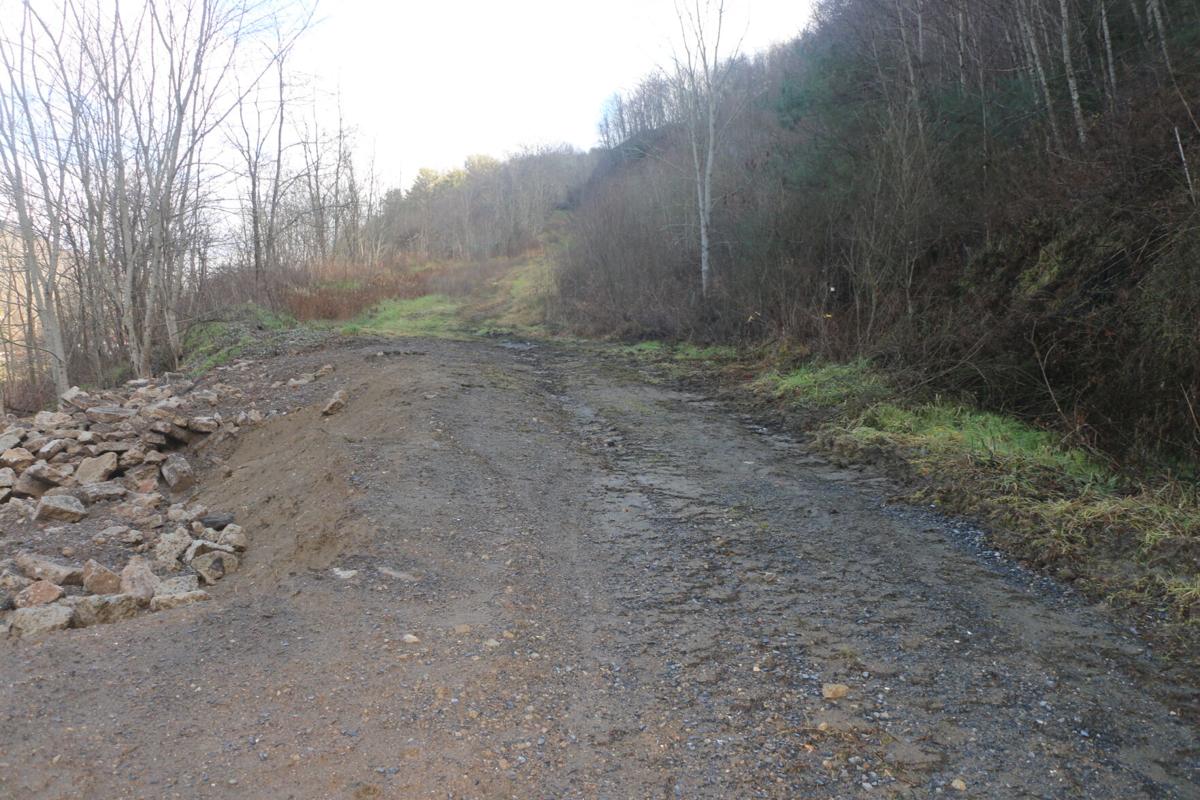 UP THE MOUNTAIN — This primitive road marks the route up Chestnut Mountain. 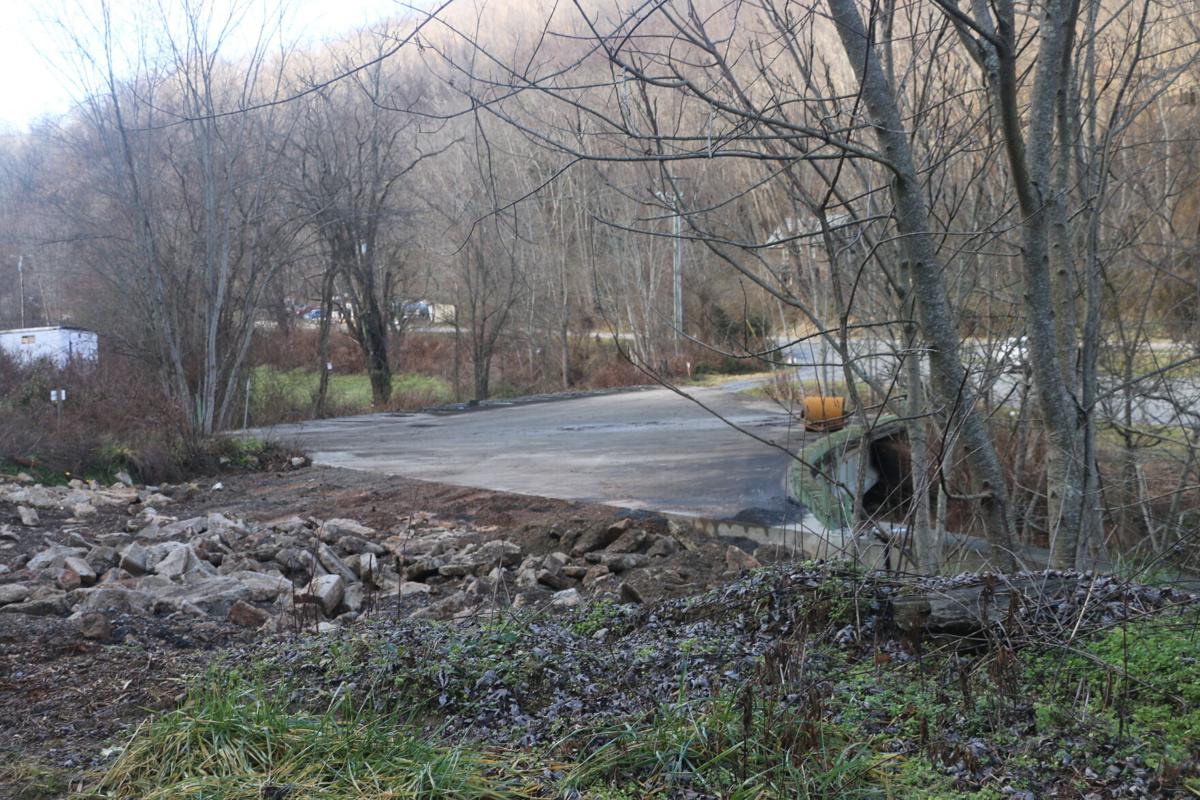 ENTRANCE SITE — A bridge built decades ago over Hominy Creek to serve a racetrack proposed on Chestnut Mountain has long sat idle. Under park development plans, it will be converted into a scenic entrance to the park.

UP THE MOUNTAIN — This primitive road marks the route up Chestnut Mountain.

ENTRANCE SITE — A bridge built decades ago over Hominy Creek to serve a racetrack proposed on Chestnut Mountain has long sat idle. Under park development plans, it will be converted into a scenic entrance to the park.

CANTON — At the foot of Chestnut Mountain just east of Canton is a concrete bridge over Hominy Creek. For years that bridge has led to what the property owner hoped would be a race track.

After three failed plans and a hefty personal investment, however, Steve Westmoreland was finally forced to abandon his ambitious dream of bringing racing to Haywood County.

Westmoreland became interested in developing a race track after the Asheville Motor Speedway closed in October 1998.

Canton Alderman Charles Crawford had contacted Hickory Motor Speedway owner John Huffman, who was looking for land to replace the Asheville race track, to suggest that Huffman meet with Westmoreland to discuss building the track on Chestnut Mountain.

When the plan was first announced, everyone the men spoke to was excited about the proposed replacement for the Asheville track, Crawford said. After all, many racing fans had spent numerous nights at the track watching drivers like Ralph Earnhardt, Jack Ingram and Robert Pressley.

Some people, however, were not happy to learn that a race track was going to be built in their section of the county. Noise and pollution concerns led to a 90-day moratorium being imposed by Haywood County commissioners to allow time to address those concerns.

“If I could point to any one thing that derailed the race track, it would be when Canton Mayor C.W. Hardin went behind everyone’s backs and convinced commissioners to adopt the moratorium. That was the beginning of the end,” Crawford said. “That ran the money off.”

Indeed when Huffman learned of the opposition and the moratorium, he put on the brakes and backed out of the plan. The moratorium was lifted shortly after it was adopted, but Huffman said original investors were no longer interested.

“Before the moratorium, I had three people who were willing to invest $1 million each,” Huffman said, noting that it would be more difficult to get investors after all the public outcry about the race track.

In a recent interview, Crawford said Huffman was all talk and no action.

Westmoreland pioneered forward without Huffman’s support, announcing a year later a new plan for an even larger motorsports park that added an equestrian center, a four-acre lake, a water park, camping facilities, condominiums, a lodge, restaurant and two hotels.

With the added amenities, the price of the park had also grown from $3 million to $71 million.

At Westmoreland’s request, Canton aldermen agreed to a satellite annexation of 17.7 acres of the roadside frontage of his property and to apply for a grant to extend water and sewer lines to the property.

Work began on the four-lane bridge in November 2001 at a cost of $600,000. The bridge was only partially completed when state regulators asked for a mitigation plan to address erosion control and water quality issues.

Two years later, with all the necessary permits obtained, work once again resumed. Water and sewer lines were extended to the property after Canton received a $350,000 grant from the N.C. Rural Center and $200,000 from the Appalachian Regional Commission. The town contributed about $100,000 toward the extension.

Everything seemed to be falling in place — except investors.

Surprisingly, in December 2005, Westmoreland came forward not with investors, but with an even more elaborate plan for his property. Sharing the concept of George Mehlhorn of Canada for a massive winter sports complex, Westmoreland said his motorsports park would be built first, followed by an exposition center, four resort villages, five hotels, a six-screen theater, health club, restaurants and an indoor arena for year-round skiing and other winter sports.

The cost also had grown substantially to $450 million for the winter sports park.

It was the boost Westmoreland had been hoping for. But, was it feasible? Mehlhorn and Westmoreland believed it was.

Just one year later, however, the whole plan went up in smoke. The decision, Westmoreland said, boiled down to one thing. Money.

The time needed to recoup an investment the size of the winter park was far longer than investors were willing to wait, he said. And, he said he could not continue to sink money and time into his dream without a guarantee that it would become a reality.

“I had always worked for myself,” Westmoreland said. “But, things just didn’t go my way for the race track. By the time everything started to come together for it, it was too late.”

So, Westmoreland began selling off the property, including the second home he and his wife owned at the foot of Chestnut Mountain. The Town of Canton had purchased a three-acre tract of the roadside property and Crawford bought almost five acres.

“There was a lot of heartache,” Westmoreland said during a telephone interview at his home in Maryland. “I never know when to quit, but I finally had to throw up my hands and walk away,” he said, selling the bulk of the property to two Washington-D.C. businessmen.

Crawford continued the upkeep on the property until June 2020, when the remaining property was sold to the Southern Appalachian Highlands Conservancy for $3 million. The 448 acres will be turned over to the Town of Canton to manage, along with help from Haywood County departments.

Chestnut Mountain’s race track that never happened will instead become a recreation area now with hiking and biking trails and primitive camping sites.

“At least the property is going to be used by the people of Haywood County for recreation,” Westmoreland said.

“By the time everything started to come together for it, it was too late.”