COMMITTED TO QUALITY — Silver Bluff in Canton has been recognized as a recipient of the Bronze — Commitment to Quality Award by the American Health Care Association and National Center for Assisted Living. 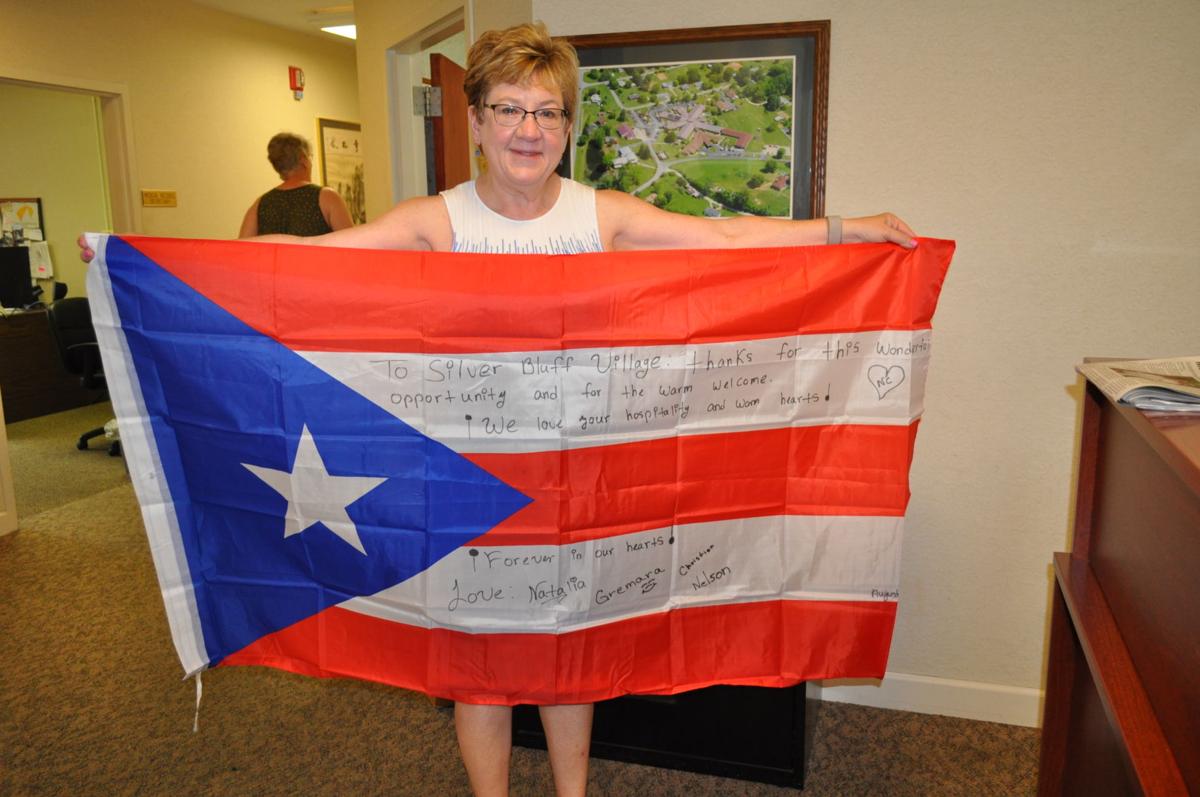 A GIFT — When Silver Bluff Village was having problems recruiting help, Lisa Leatherwood began recruiting U.S. citizens in Puerto Rico and now has 14 from the territory on staff. Above is a flag the employees presented as a symbol of their gratitude. 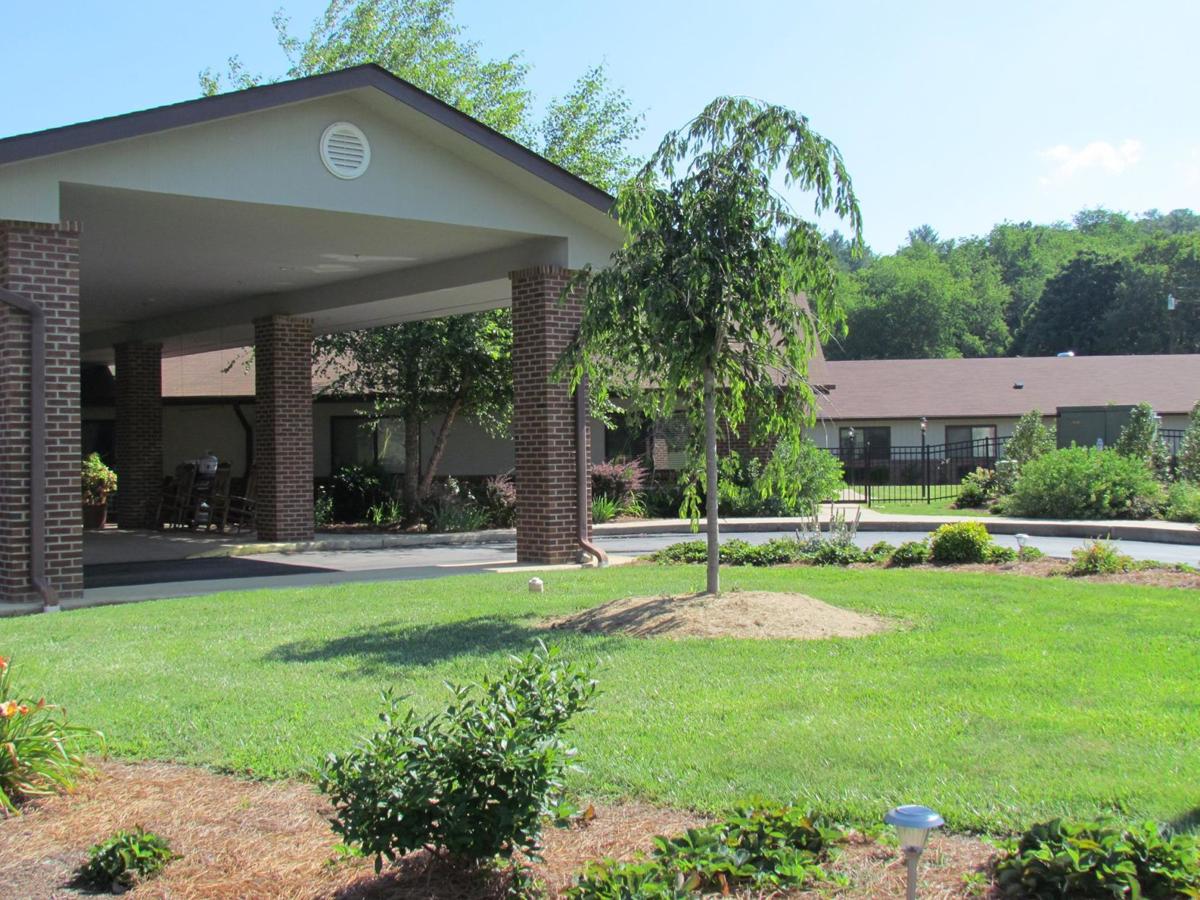 VOLUNTEER —There are places to volunteer across Haywood, including at Silver Bluff Village in Bethel.

COMMITTED TO QUALITY — Silver Bluff in Canton has been recognized as a recipient of the Bronze — Commitment to Quality Award by the American Health Care Association and National Center for Assisted Living.

A GIFT — When Silver Bluff Village was having problems recruiting help, Lisa Leatherwood began recruiting U.S. citizens in Puerto Rico and now has 14 from the territory on staff. Above is a flag the employees presented as a symbol of their gratitude.

VOLUNTEER —There are places to volunteer across Haywood, including at Silver Bluff Village in Bethel.

For Lisa Leatherwood, administrator at Silver Bluff Village outside of Canton, the past three weeks have been the worst thing she’s ever experienced in 40 years of nursing.

The outbreak has impacted all associated with Silver Bluff Village in one way or another and is one Leatherwood agonizes over almost nonstop.

She said she’s asked everyone she’s spoken with as she strives to quell the outbreak what could have been done differently. The consistent answer has been “nothing.”

Silver Bluff Village has held a five-star rating — the highest health care rating possible for years — and had been proactive in addressing infectious disease issues long before the world ever heard of COVID-19.

While most long-term care facilities didn’t act on the now-required infectious disease inspections and training before the pandemic hit, Silver Bluff had gone through the extensive inspection and training three years ago.

Likewise with going the extra mile by inviting an on-site inspector with the State Program for Infection Control and Epidemology (SPICE) to review the Silver Bluff campus-wide procedures.

“As far as I know, we were only ones that did it way back,” said Leatherwood who estimated she had spoken with Evelyn Cook, the SPICE associate director at least 50 times since the COVID-19 outbreak hit Silver Bluff. “She told me we had the best set up of any facility she’d seen. I sat there and cried and asked, ‘then why is this happening?’”

Neither SPICE nor the Haywood County Health department had any answers and could not recommend a single thing that could have been done differently — or could be done now.

To be cleared, a facility must go 28 days with no new reported cases. In talking to other facilities that have been hit, Silver Bluff still has a long road to go.

“We’re starting our third week, and we’re hearing that about week four, it maybe will start getting better,” she said.

The COVID outbreak has been a nightmare not only for residents and their families, but for the staff at Silver Bluff ever since July 13, when COVID-19 was found in the facility.

That was despite the early — and regular — testing the facility championed as a way to prevent an outbreak.

When the county offered to test front-line essential workers in the county in April, Silver Bluff voluntarily sent 85 staff members over for the testing — the only long-term care facility in the county to do so, Leatherwood said.

In May, Silver Bluff covered the cost of again testing staff members at $75 per test. Workers would have tested in June had that been possible, Leatherwood said.

Then, shortly before a scheduled July testing event, Silver Bluff learned two employees who were asymptomatic had tested positive.

Believing that transparency was the best policy, Silver Bluff immediately notified the contact person for each resident and then posted all relevant information on the business Facebook page — an action that seemed to be the best way to reach all family members, not just those listed as immediate contacts.

“The family members have been so supportive. They have called to check on us, sent us food and have been so understanding,” Leatherwood said.

Throughout the ordeal, residents have been pretty resilient and are doing remarkably well, Leatherwood said.

“Back in March, there could be no visitors, but they could still move around a little bit. Most of them are older and are used to sacrificing, and they understood it was to keep them safe,” she said.

Since the outbreak, it has become much harder as no resident can leave his or her room.

But what impresses Leatherwood the most is the dedication of the staff. When they were needed the very most, they’ve been there.

A couple quit early on because of health problems, and then when the COVID outbreak occurred, several others walked out, but the rest have been there to provide the essential care residents need.

“The core staff has been incredible,” she said. “I knew they were good, but until this, I didn’t know how good. It just makes you cry because they don’t have to do this. They could go flip burgers or stay home and collect unemployment. I’m so proud of them.”

In addition to the risk of becoming infected, work is grueling, heartbreaking — and hot — considering all the protective gear they must wear to do their daily job.

Because residents can’t have visitors, the caretakers are the ones who console them when a family member dies or when they are lonely just to chat with another person.

Then there’s the staff shortage.

The state promised there would be contract workers who would fill in when needed, but that hasn’t happened, Leatherwood said.

That means the employees still left are working double shifts and at times without breaks to make sure the residents get the care they need.

“We’ve signed contracts with seven different agencies trying to get staff in and are working the core staff as much as they will work,” she said, adding that the therapy staff have volunteered to work as nursing assistants, and even her 20-year-old daughter is working to help care for residents.

While the vast majority of families have been understanding and full of praise for the care their loved ones are receiving at Silver Bluff, several individuals have unleashed a flurry of disparaging comments on the Silver Bluff Facebook page where Leatherwood was doing her very best to update families and the broader community.

“We had two people tear up our Facebook page up with ugly comments and things that weren’t true,” Leatherwood said.

The comments involved several employees who went on vacation and were accused of introducing the virus into the facility.

“One person went after a nurse, posted pictures of her and accused her of bringing it in,” Leatherwood said. “It was not true, and I hate that.”

Others on the page praised and defended Silver Bluff’s policies and employees, but the discussion turned into a “big mess,” Leatherwood said, and has caused her to examine whether the Facebook progress reports are worth it.

There is a daily screening process aimed at preventing any worker with virus-related symptoms from working for seven days, but asymptomatic positives throw a wrench in the plan.

After the July testing event for all residents and workers — a time frame that put exposure between two and 10 days — 30 percent had no symptoms. Some have now gone 10 days after testing positive with no symptoms.

“If they have no symptoms, how are we supposed to weed that out?” Leatherwood asked. “If I kept out every employee who has been to grocery story or on vacation, I wouldn’t have any staff.”

What would help, Leatherwood suggested, is if people in the community would show respect for the seriousness of COVID and how their actions play into making it worse.

“It’s frustrating to us that the community doesn’t see how they impact us when go out without a mask,” Leatherwood said. “They are exposing my staff. They have to live. They have to go to the grocery store.”