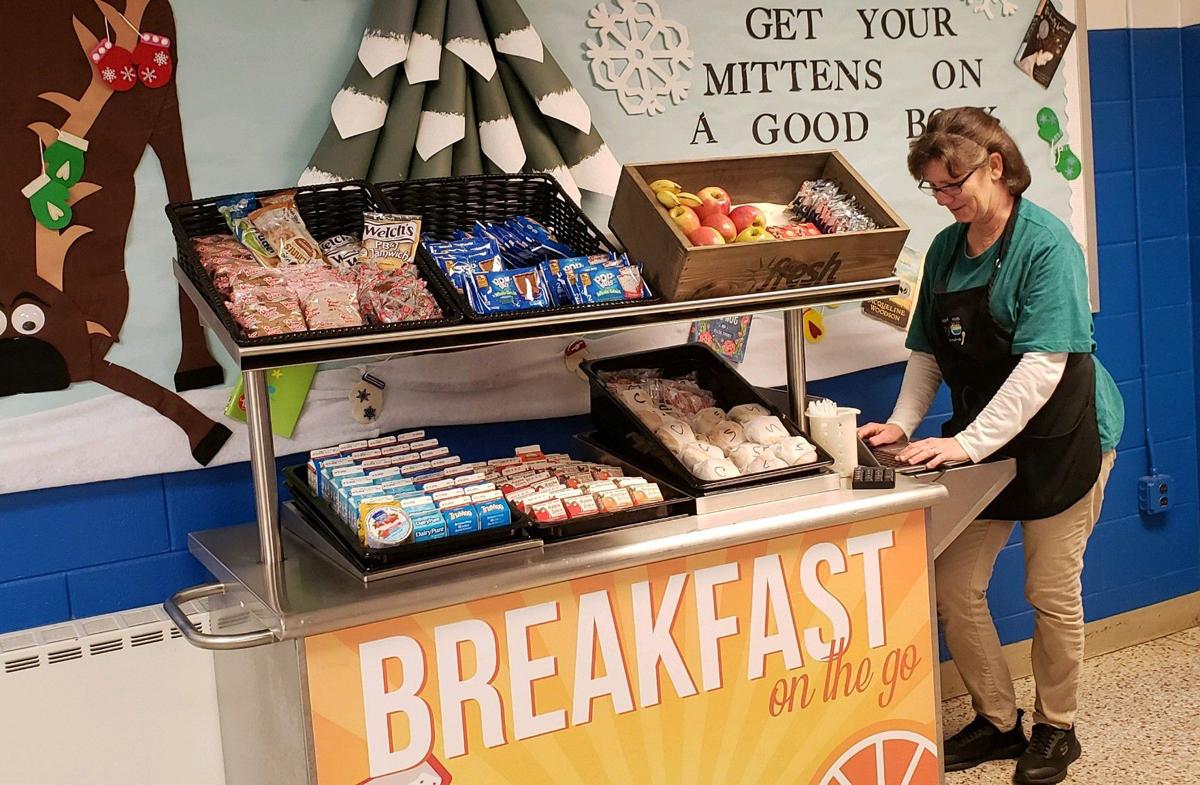 BREAKFAST ON-THE-GO — Students at middle and high schools now have grab-and-go breakfast options in the halls, like this push-cart staffed by Angie Corn at Bethel Middle School. 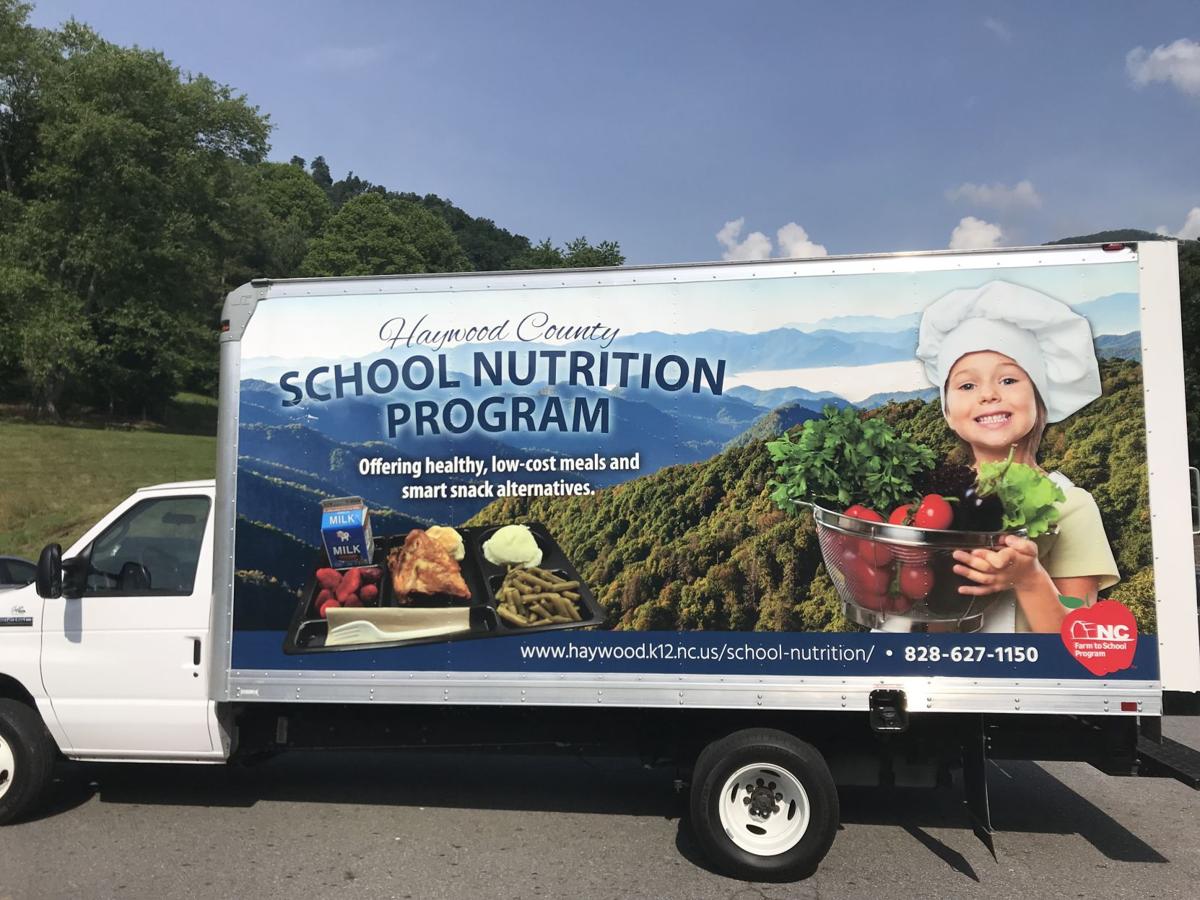 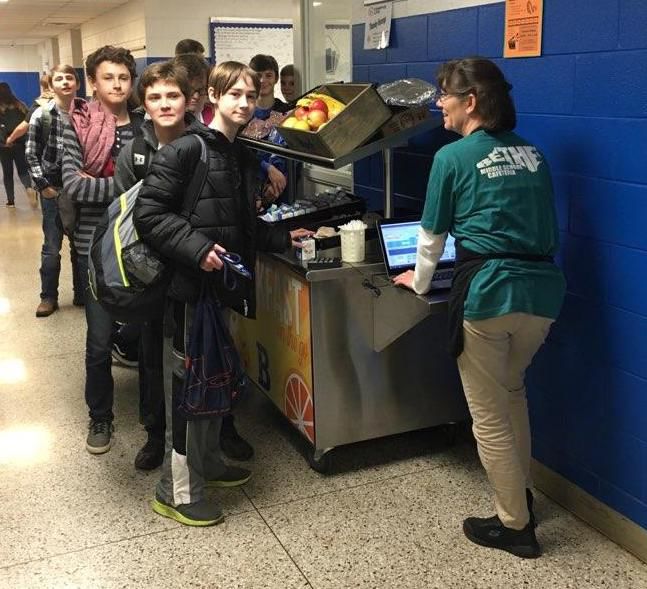 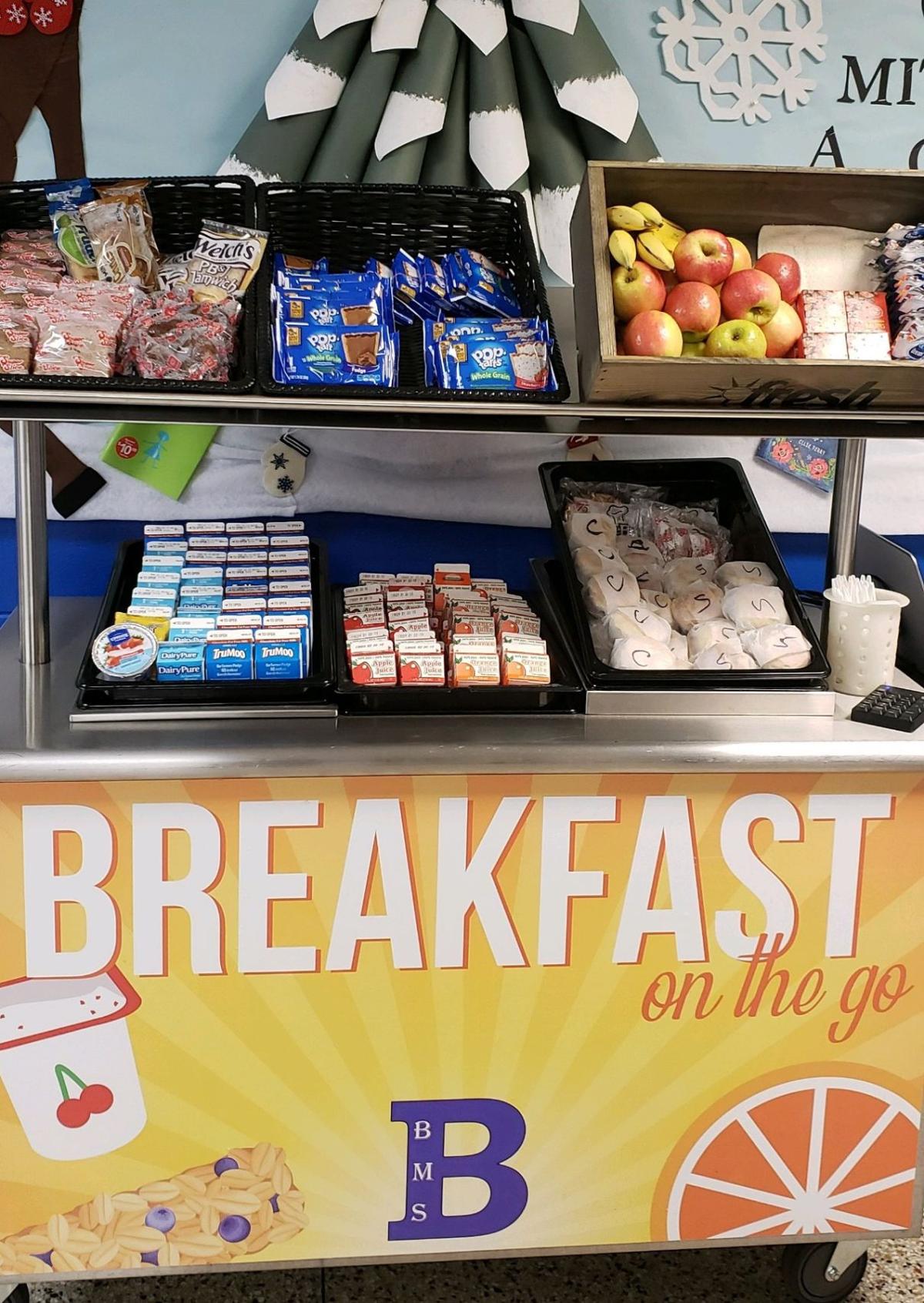 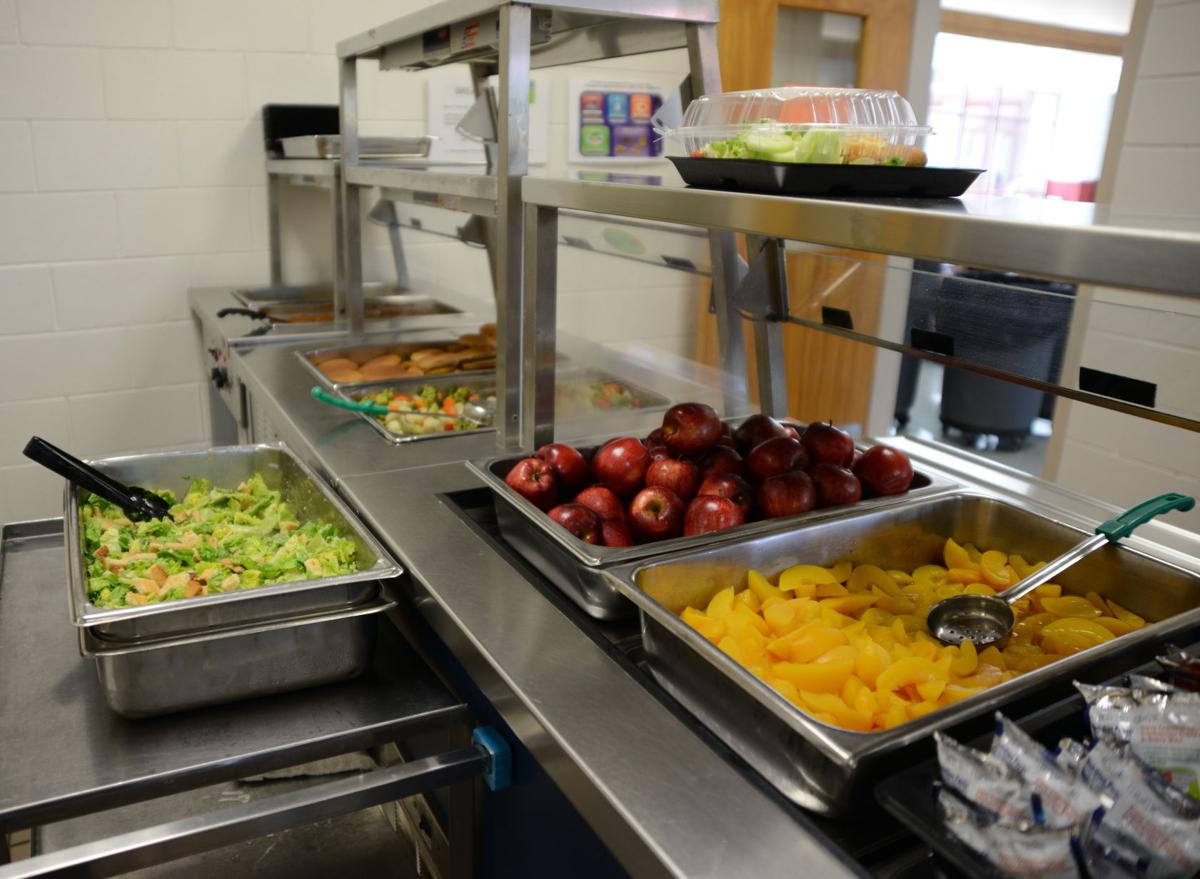 HEALTHY FAIRE — School lunch is usually the healthiest meal kids get all day, witness by this spread that includes salad, apples and peaches in the Clyde Elementary cafeteria line. 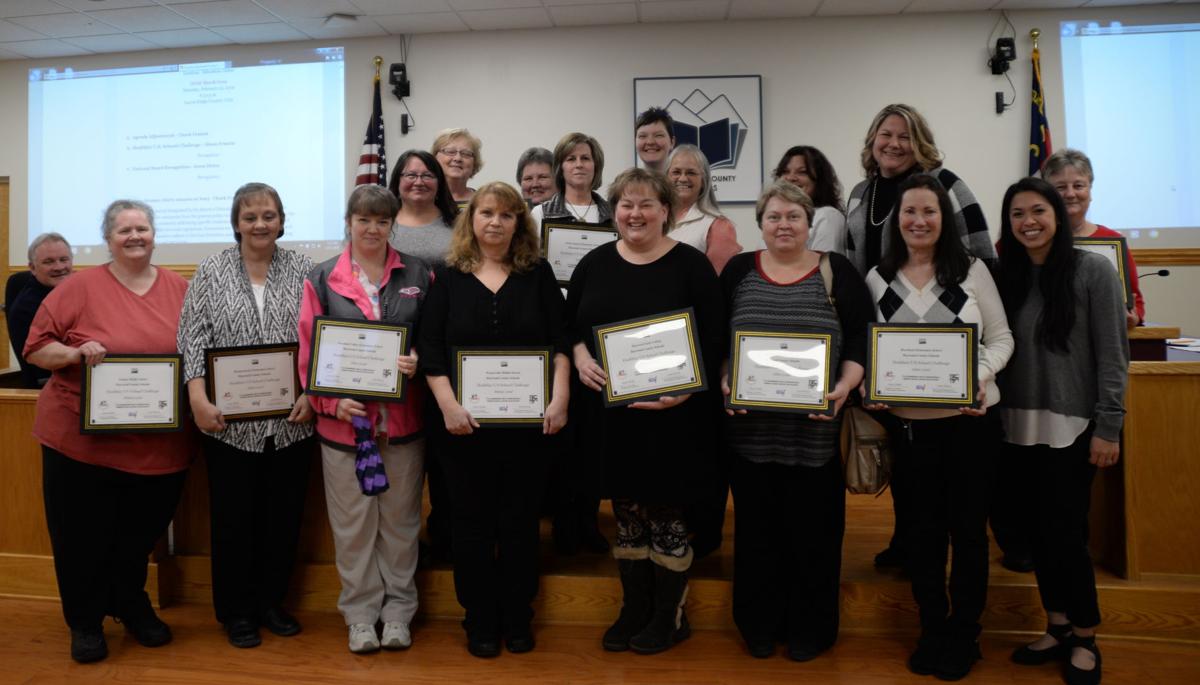 BREAKFAST ON-THE-GO — Students at middle and high schools now have grab-and-go breakfast options in the halls, like this push-cart staffed by Angie Corn at Bethel Middle School.

HEALTHY FAIRE — School lunch is usually the healthiest meal kids get all day, witness by this spread that includes salad, apples and peaches in the Clyde Elementary cafeteria line.

Middle and high schools made a dent this year in the uphill battle to get teens to eat breakfast with a clever but simple premise: meet them on their own terms.

Push-carts are now stationed in the hallways each morning with breakfast foods for students to grab on their way in to class.

“A lot of them just aren’t hungry at 6:30 in the morning when they go to catch the bus,” said Alison Francis, nutrition director for Haywood Schools. “Now they can grab a piece of fruit and a juice or a milk and a biscuit or danish — things they can eat as they walk down the hallway or in class.”

The breakfast carts are one of many initiatives in the never-ending push for healthier schools. Those efforts were recognized last month when the cafeteria operations of all 15 Haywood County Schools were honored for meeting the USDA’s Healthier Schools Challenge.

“They work hard to provide healthy and nutritious and appealing meals for our students and a lot of time they go unnoticed. I am glad we are able to recognize them with this reward,” Francis said.

In the 15 years since the inception of the Healthier Schools Challenge, only 4,000 schools nationally have earned the title. All 15 public schools in the Haywood County School system have now joined that list.

“This is a very small number of schools within the nation that have achieved this level of recognition,” said Sherry Held, nutrition specialist with the N.C. Department of Public Instruction.

Held spoke at an award presentation during a recent school board meeting where certificates and accolades were passed out to cafeteria workers from each school.

“It is hard work. You all have been up before any of us I’m sure,” Held told them.

To qualify for the prestigious title, schools had to meet dozens of rigorous criteria.

One of the benchmarks, for example, was the number of students who put fruits and vegetables on their lunch tray when going down the line. To that end, classic marketing tricks are used to position colorful, eye-catching arrangements of apples or oranges in a prominent spot.

Another criteria is not using food as a reward, or physical activity as punishment. It’s a tempting and albeit effective strategy for teachers to pass out a small piece of candy as an incentive to finish those math problems, but it’s no longer allowed under a universal school board policy adopted last year.

“That was one of the things that kept us from applying in the past,” Francis said.

The nutrition awards carry a bronze, silver or gold title. To get the gold, schools even had to do away with food-related fundraisers, which knocked out all but Central Haywood High and North Canton Elementary from the top rank.

Schools also had to catalog the number of minutes each week when students engage in physical activity. An increasing number of teachers, especially at the elementary level, do “brain breaks” throughout the day. Students get up from their desk and move vigorously for a few minutes, often by putting on a short dance video with choreography to follow along with.

The biggest criteria for the awards came down to the percentage of students getting breakfast and lunch at school.

Breakfast is the weakest link, with two to three times more students getting lunch at school compared to breakfast, making it the primary target for growth.

Making the breakfast push-carts a reality required cooperation from each school.

“We have the teachers on board to let the kids eat at their desk as long as they aren’t making a mess,” Francis said.

But it also took funding to buy the fleet of push-carts.

“They aren’t cheap, but we were able to get grants through the Dairy Council and Healthy Active Children to help us pay for the carts and additional supplies,” Francis said.

The national titles came with a monetary award totaling $14,500. The award couldn’t be given to cafeteria workers as cash, but Francis came up with the next best thing.

The money will be used to provide uniform shirts to the cafeteria workers, which they currently have to buy out of their own pocket.

“We wanted to give back to the employees who make it possible,” Francis said.