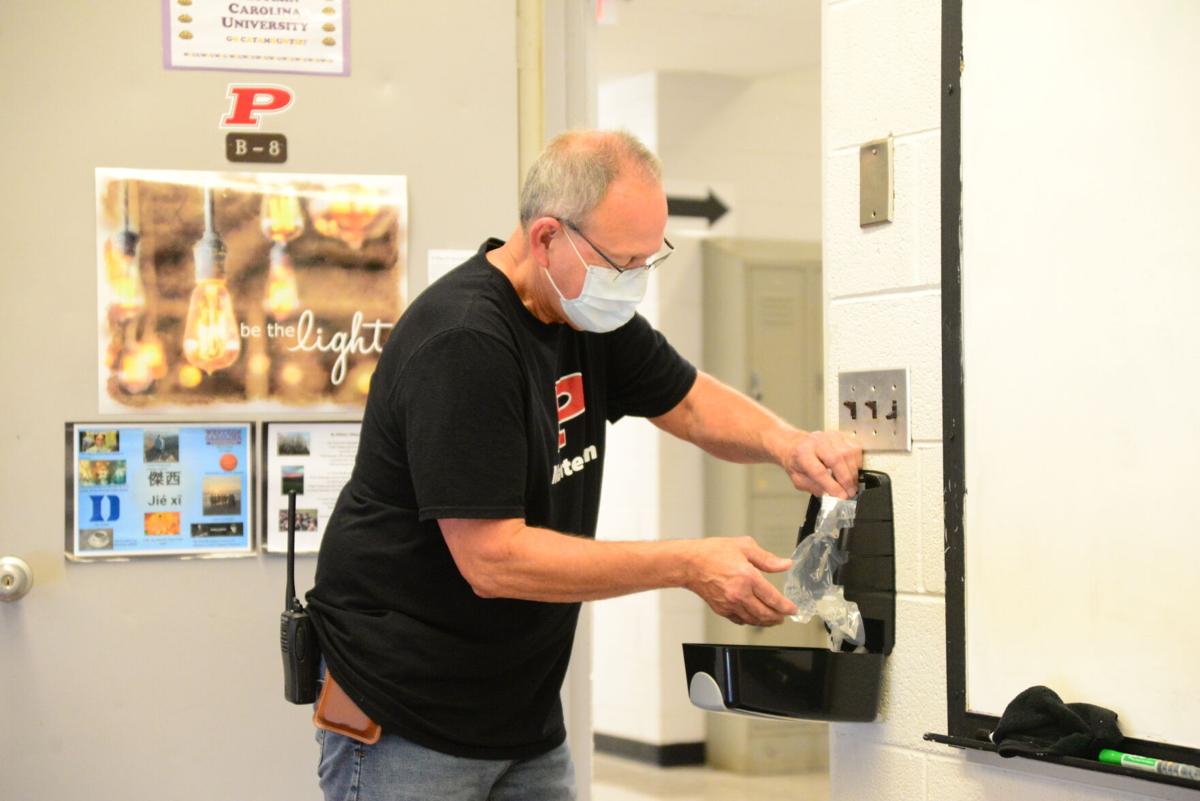 UNLIMITED REFILLS — Custodians face a huge load of additional duties to keep schools clean, including keeping tabs on dozens of hand sanitizer dispensers in every classroom and around every corner. Pisgah custodian Michael Harlan shows how the bags can be swapped out when empty.

back to school pisgah hand sanitizer.JPG 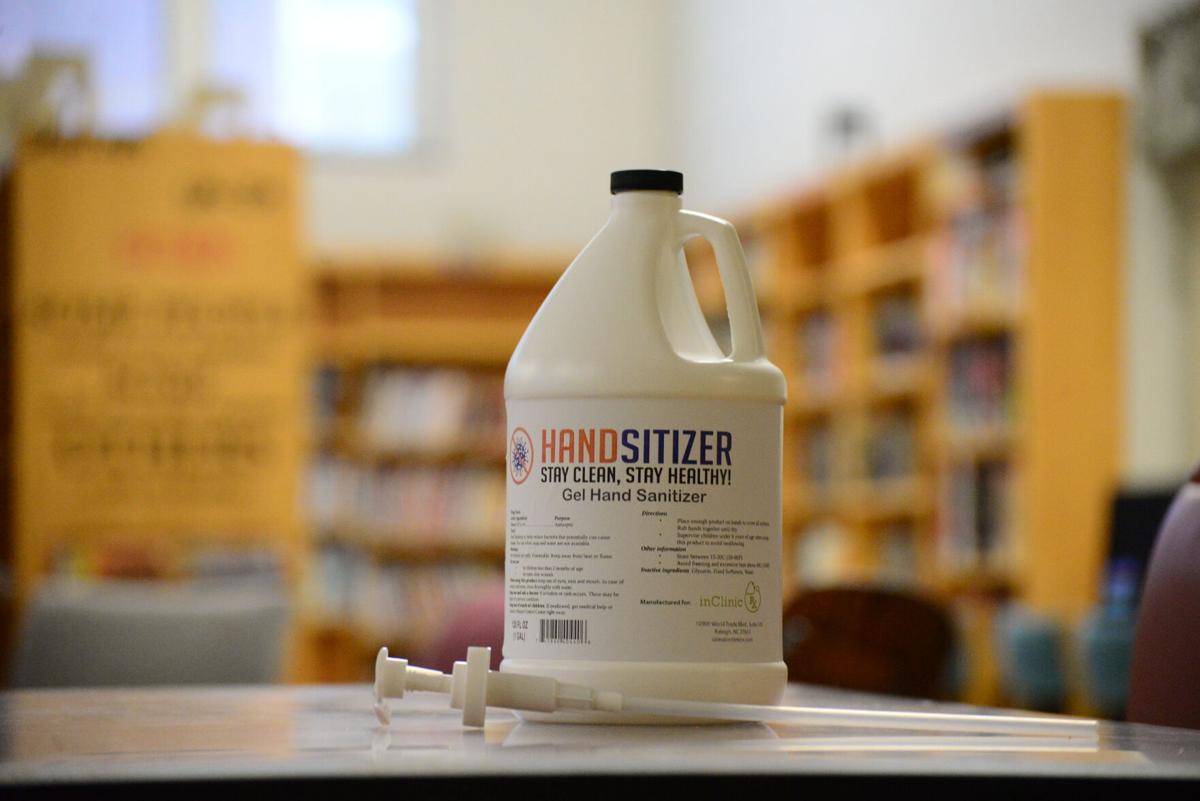 BY THE GALLON — A student that contracts COVID at home won’t necessarily spread it at school — even if they came to school while contagious — if proper protocols are being followed. A jug of sanitizer sits on an entry table at Waynesville Middle library.

back to school WMS sanitizer.JPG

UNLIMITED REFILLS — Custodians face a huge load of additional duties to keep schools clean, including keeping tabs on dozens of hand sanitizer dispensers in every classroom and around every corner. Pisgah custodian Michael Harlan shows how the bags can be swapped out when empty.

back to school pisgah hand sanitizer.JPG

BY THE GALLON — A student that contracts COVID at home won’t necessarily spread it at school — even if they came to school while contagious — if proper protocols are being followed. A jug of sanitizer sits on an entry table at Waynesville Middle library.

back to school WMS sanitizer.JPG

Haywood County Schools is reporting its first known positive COVID-19 case by a student, although it is believed the student caught it outside school rather than at school.

The school promptly shared the news with Jonathan Valley parents via an automated call. That call disclosed what grade the student is in, but not their particular teacher due to privacy laws.

Parents at Jonathan Valley wondering whether their own child may have been exposed needn’t worry unless they got a subsequent call from contact tracers.

The first positive case gave the school system a chance to test its response protocols. Those protocols were discussed at a school board work session last week.

“I hope we don’t have to use this plan, but I’m confident that we might,” Nolte said.

It was only a matter of time before a positive case turned up among the 5,200 Haywood students who returned to in-person school this month.

The overview of protocols at the school board meeting last Thursday were purely hypothetical at the time.

That changed by the afternoon of the following day, giving the school system a chance to test its notification process and close contact protocols sooner rather than later.

Here’s how the response protocol works when a student or school employee tests positive for COVID:

Step 1: School notifiedThe schools do not do testing themselves, but are notified immediately by Haywood County public health officials if a student or employee tests positive.

If someone is displaying symptoms while at school, they are sent home and can’t return without an all-clear certification. Likewise, a student or employee could be tested of their own accord due to possible exposure outside school.

Either way, county health officials would immediately inform the school if there’s a positive case.

“That school will know pretty readily just as soon as there is a confirmed case,” Putnam said.

The school system will directly notify parents of the particular school through an automated phone call. Parents will be told what grade the student is in, but not the student’s specific class or teachers.

“We would promptly notify the parents of the school about the grade level in which the positive occurred. We can’t be more specific than that because we do not want to violate HIPPA or FERPA regulations,” Nolte said.

“Families would get a call if public health determines them to be a close contact,” Nolte said. “Public health officials do the contact tracing.”

Public health officials then work with the principal and student’s teachers to help determine which — if any — kids or teachers meet the definition of a close contact.

Those who may have been exposed would then have to quarantine and get tested themselves. If any of those test positive, the process starts over.

Step 4: Public disclosureHaywood County Schools has launched a COVID dashboard on its website that tracks every positive case among students and staff by school. Cases are updated daily, with a running tally, plus any new cases from that day — allowing anyone in the general public to see where cases are occurring.

The dashboard can be found at www.haywood.k12.nc.us on the top left side.

Who will know what, and when?

Ideally, there wouldn’t be any students or teachers considered a close contact.

“We are not likely to be close contacts if we put our mask on and stay 6 feet away,” Nolte said. “It is a group effort.”

Alerting all the parents within a school that there’s been a positive case is a double-edged sword.

While it could cause panic, erring on the side of transparency reassures parents that they won’t be kept in the dark and that cases won’t be covered up.

“That has been a huge concern I’ve heard about in the public, is are we going to get notified if something happens?” said School Board member Jim Francis.

Still, parents who learn of a COVID case in their child’s grade might wonder whether they should be worried. Parents can assume that no news is good news.

“They would get a call if public health felt they were a close contact,” Nolte said.

“There’s only certain information that can be given out legally. I hope the public understands that,” School Board Member Jimmy Rogers said.

While Nolte avidly issues press releases to media outlets as a conduit of disseminating information to the community at large, when it comes to COVID cases, there won’t be a press release.

“We want to make sure our parents have the first notification. That may not be possible in the world of social media if people start posting stuff, but we would like parents to get the notification from us before they read it in a reliable source like a media outlet,” Nolte said.

All cases will be updated on the school’s COVID dashboard on a daily basis for anyone in the public to see, however.

The COVID case protocols were developed in concert and at the recommendations of Haywood County Public Health Director Patrick Johnson and Medical Director Mark Jaben.

“We’ve worked on it a bunch together,” Nolte said. “They’ve been very helpful and cooperative.”