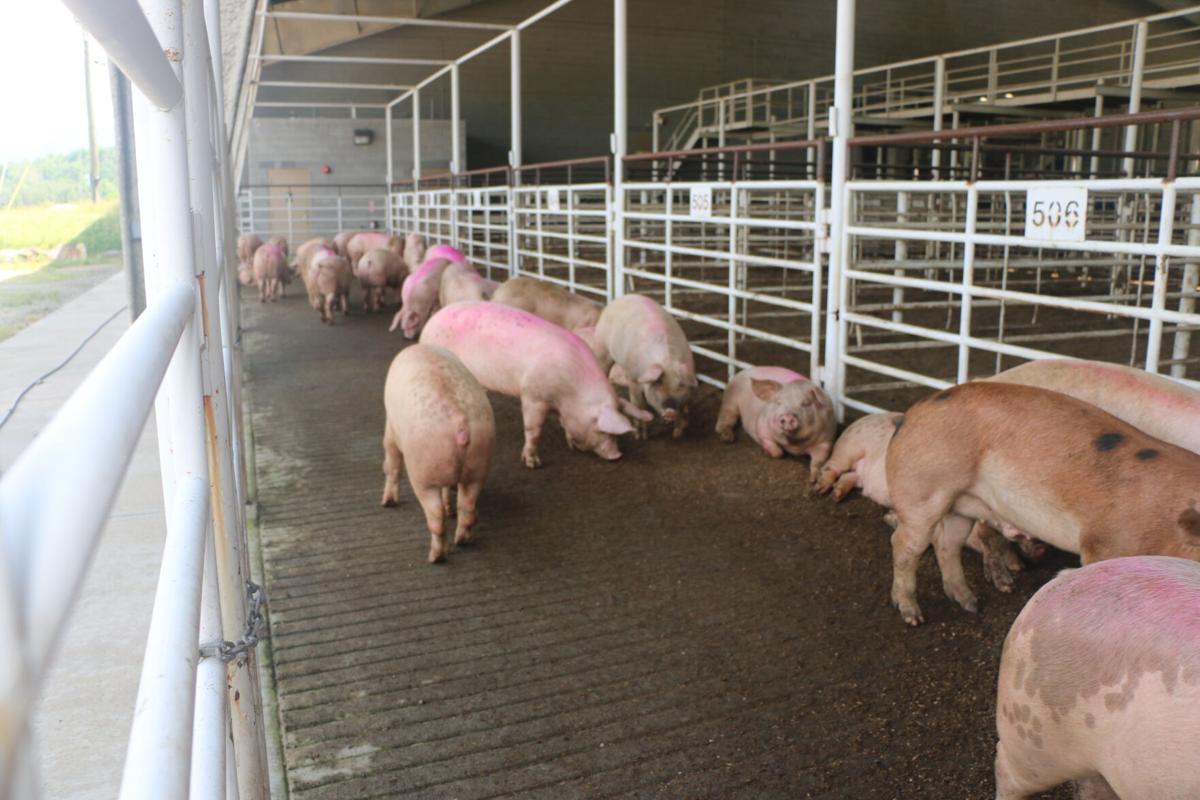 HILLBILLY HOGS ARRIVE — A truck load of 180 hogs arrived in Haywood Thursday, and buyers from across the region were on hand to pick them up. 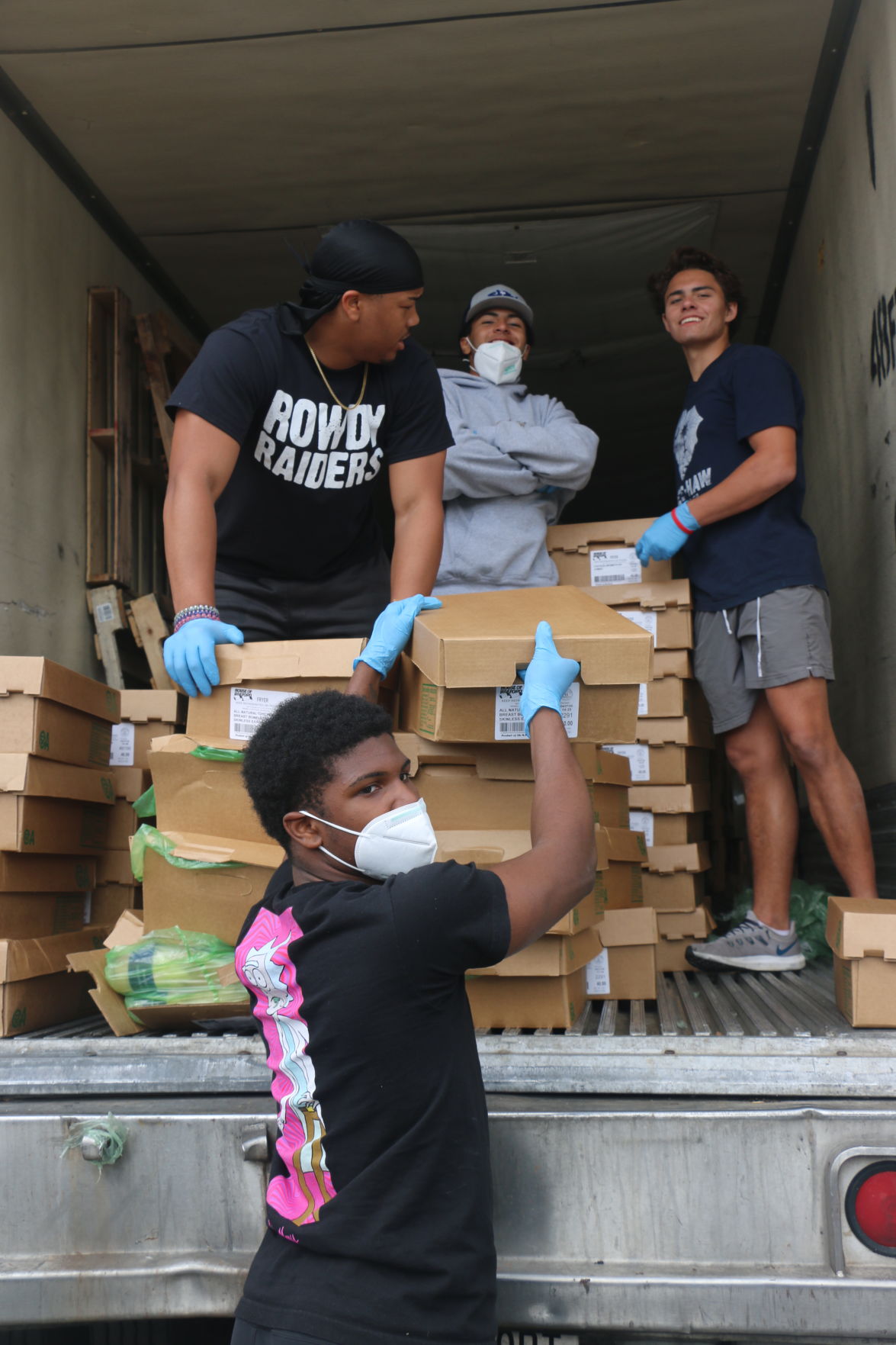 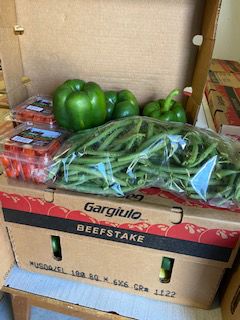 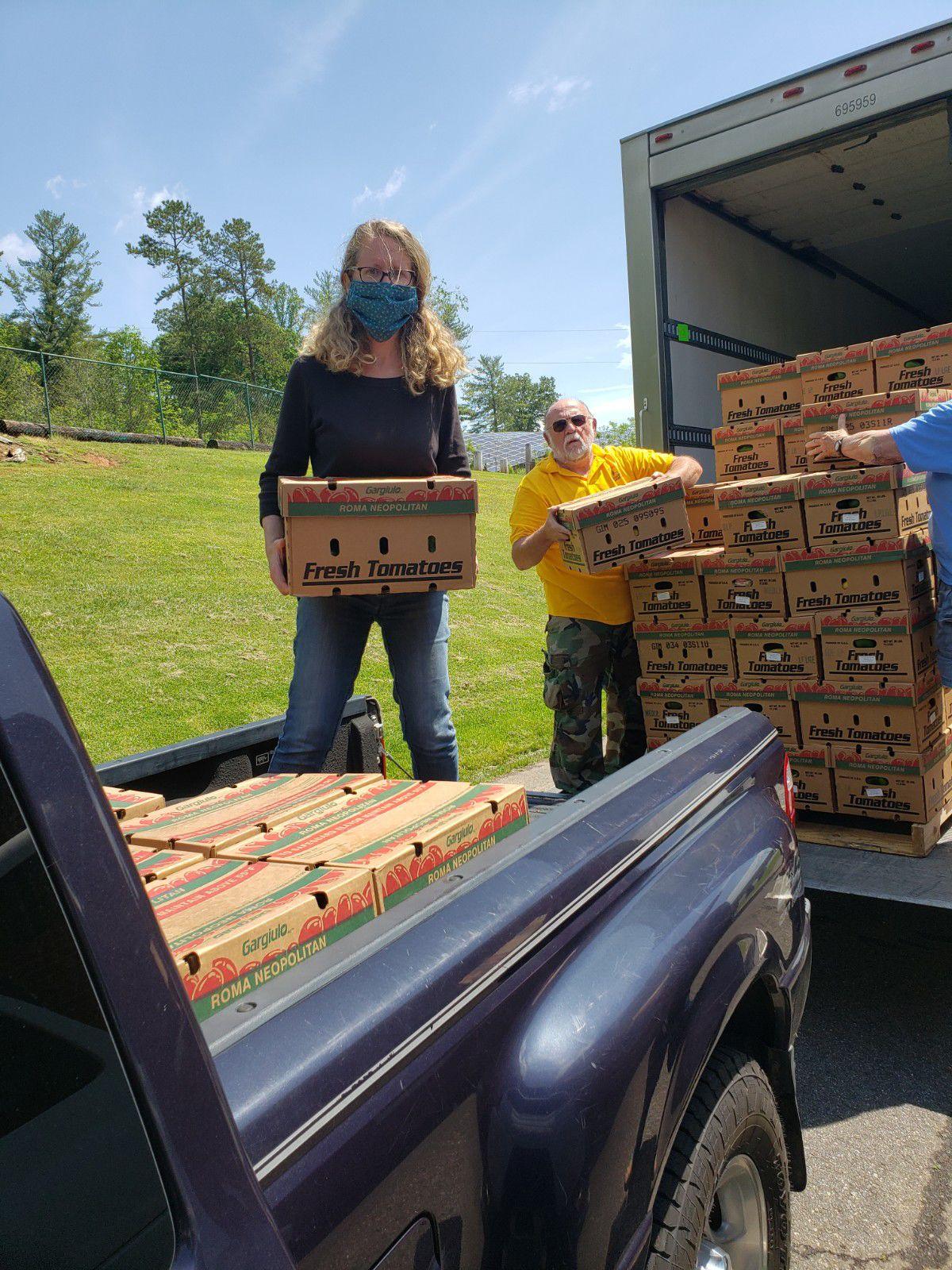 FARM FRESH — Area residents were able to buy fresh chicken for $1 a pound when House of Raeford brought three semis filled with 40-pound boxes to Canton. 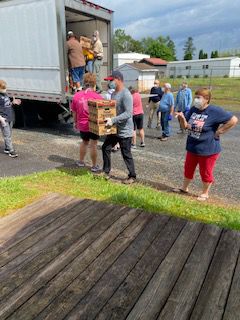 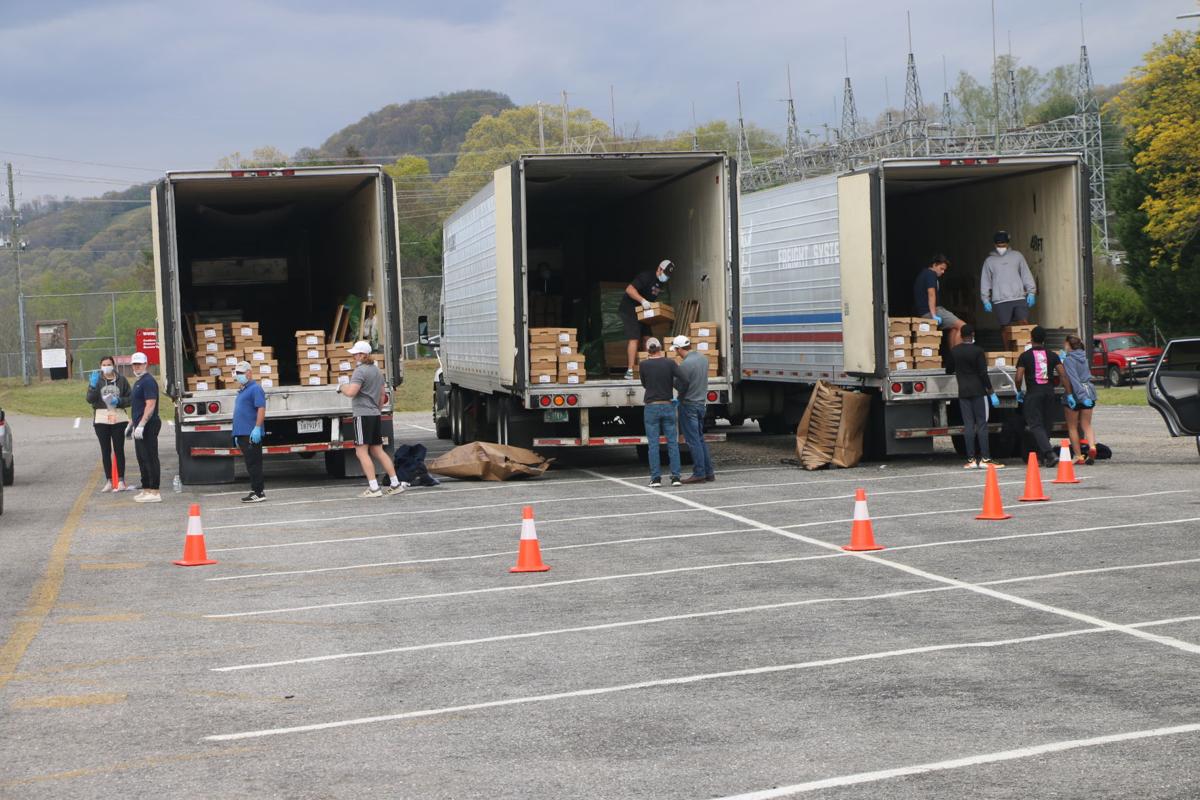 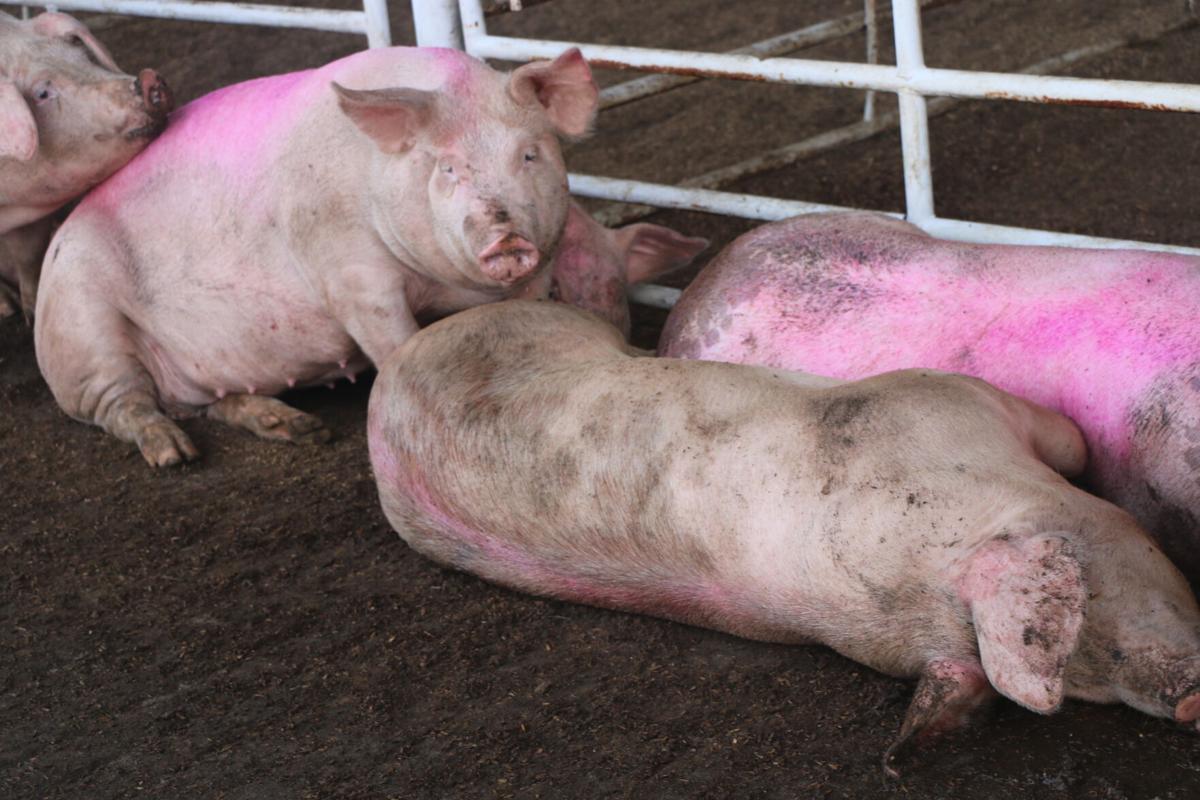 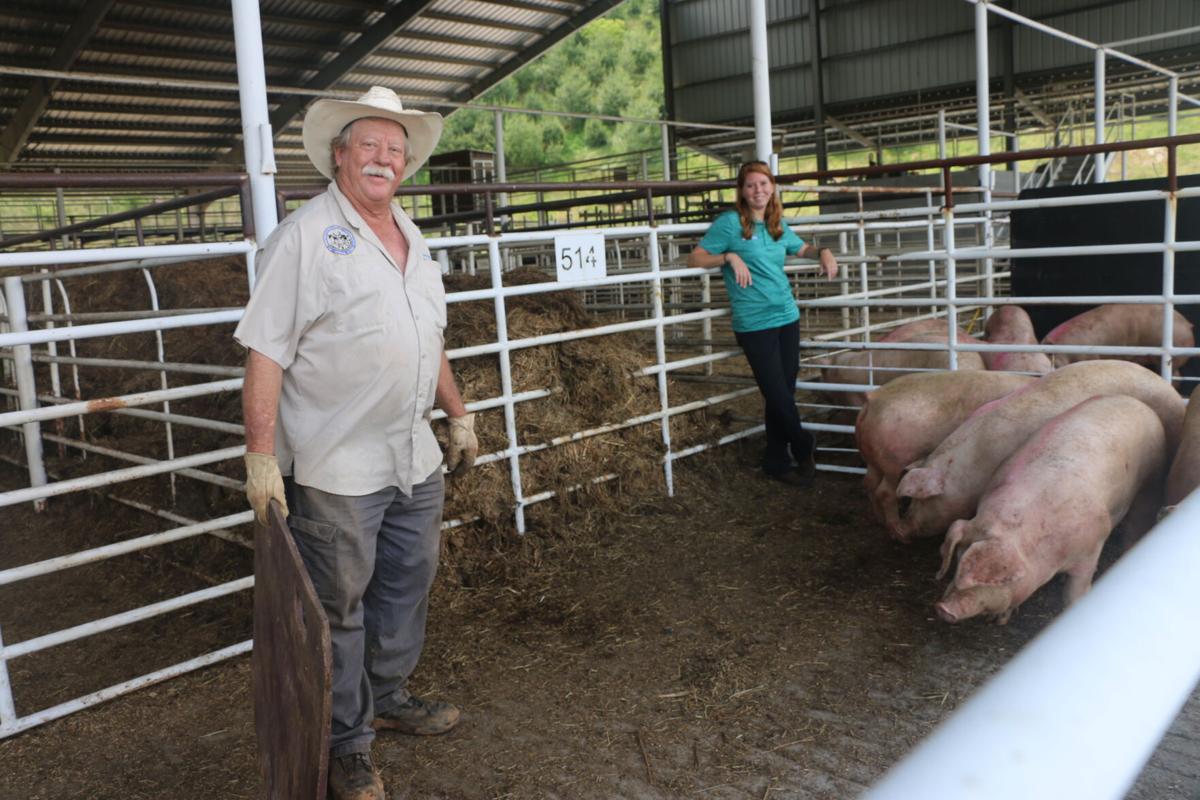 N.C. Department of Agriculture rep Mike Styles and N.C. Cooperative Extension agent from Madison County Rebecca Bradley were lining up hogs to be loaded into trailers. 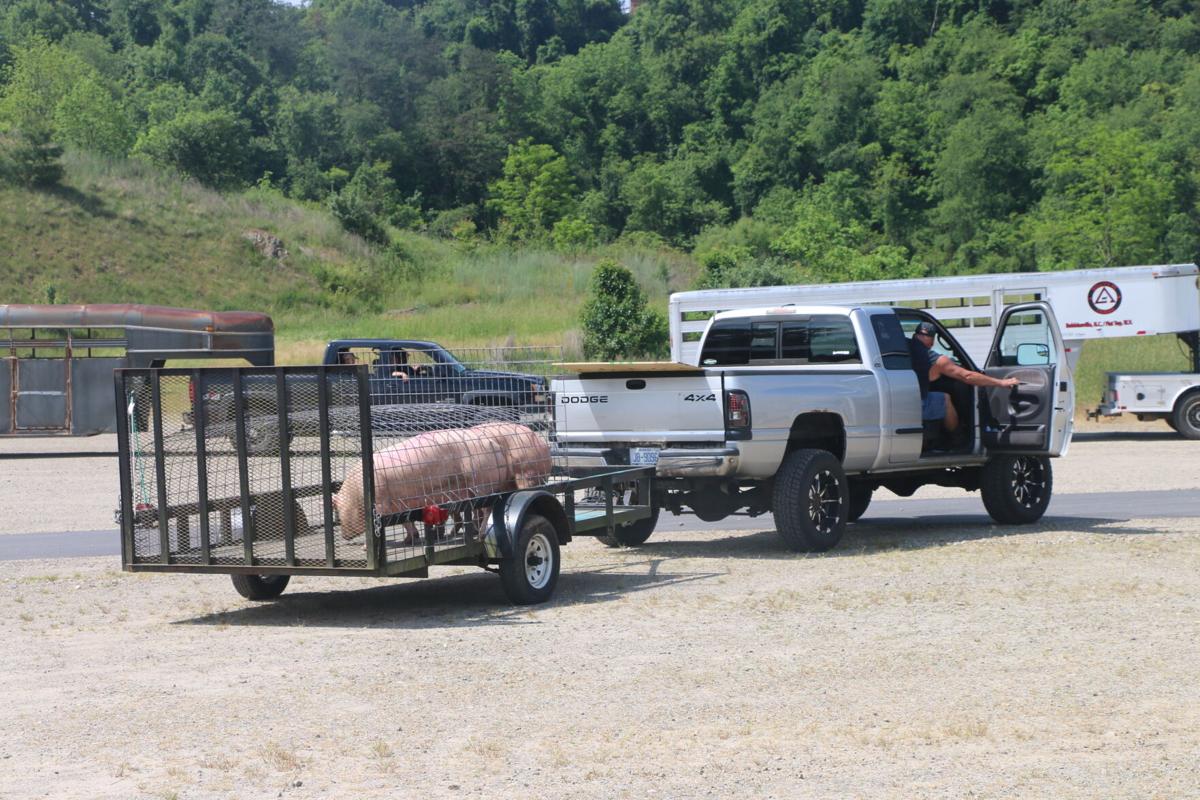 HILLBILLY HOGS ARRIVE — A truck load of 180 hogs arrived in Haywood Thursday, and buyers from across the region were on hand to pick them up.

FARM FRESH — Area residents were able to buy fresh chicken for $1 a pound when House of Raeford brought three semis filled with 40-pound boxes to Canton.

N.C. Department of Agriculture rep Mike Styles and N.C. Cooperative Extension agent from Madison County Rebecca Bradley were lining up hogs to be loaded into trailers.

As the ripple effects of the global coronavirus pandemic continue to impact every aspect of the economy, hunger issues have been at the forefront to many.

WNC Communities has been a vital link to solving at least a portion of that problem when it comes to providing sources of protein in Haywood.

The unprecedented times called for unprecedented actions, said L.T. Ward, who has been on the WNC Communities board for 40 years and now serves as the volunteer vice president and senior executive.

“The fundamentals of this program have been brought on by COVID-19, which shut down the market for the produce, whether, chicken, pork or even vegetables,” Ward said. “Our outlet is actually a creation of that but also meets the accelerated needs of people at this time.”

The organization’s pop-up fresh markets were instrumental in distributing the surplus products created by the disruption in the food chain pipeline and helped both producers and consumers when they needed it most.

The food supply disruption was primarily caused by the closure of restaurants, which were eventually allowed to reopen at 50 percent capacity. This wreaked havoc not only to the bottom line of the business owners, but in the agriculture industry where farmers rely on the natural production cycles of livestock, crops and poultry.

The abrupt closure of a significant distribution center — restaurants — resulted in a glut at the production level, and the problem was further exacerbated when COVID-19 hit a number of the processing facilities, leading to temporary closures and reduced production.

Steve Troxler, the N.C. Department of Agriculture and Consumer Affairs, had a vested interest in helping both those who produce the food and those who consume it, and was key to devising innovative ways to accomplish this task, Ward said.

The program started with a variety of organizations collaborating to bring fresh poultry directly to consumers. Direct truck sales started in metropolitan areas and eventually made their way to Western North Carolina where semi-loads of fresh chicken — 40 pound boxes of either breasts or drumsticks — were sold for between $35 and $45.

WNC Communities was a partner in facilitating the details of the sales, but as a nonprofit, handled none of the actual sale details.

“It was a natural fit for us to get involved in trying to help bring additional resources to our communities,” Ward said of the 20 counties in Western North Carolina where WNC Communities has 65 affiliated organizations.

The long lines of people waiting to pick up bargain chicken led to further innovation, which was theFarm Fresh Pop Up Shop program where a person could go online, place an order and be assigned a scheduled time for pickup, where they would pay chicken provider on the spot. This aspect of the distribution program was made possible through financial support from the Dogwood Trust, Ward added.

The milk, cheese and produce program was an initiative of the U.S. Department of Agriculture, which allocated federal funds to buy surplus fruits and vegetables from producers and bring them to the doorstep of individuals in need.

WNC Communities became involved in what Ward called the “last mile distribution” effort through a partnership with the Baptists on Mission organization based in Cary.

That partnership resulted in 8,000 food boxes a week being distributed across the region through the community organizations, including church and nonprofit food pantries in each county.

Perhaps the most “outside-the-box” program made possible through the N.C. Department of Agriculture and Consumer Affairs was one where live hogs were delivered to the Southeast Regional Livestock Exchange in Canton.

Individuals could reserve the hogs through the pop-up market exchange program, and once 180 orders were placed — enough for a semi-load — they would be delivered.

Those picking them up had to arrange a place for them to be processed or do the task themselves.

“The hog program seemed like unusual situation, and, at first I was not eager to make that move,” Ward said.

But at the prompting of Haywood resident Bill Yarborough, who is an assistant to Troxler, the collaborating partners decided to give it a whirl.

“I had grown up on a farm and knew how hogs got killed, but I wasn’t aware that skill was that readily available,” Ward said. “We went forward with a program that would take hogs that would be euthanized in east and transported them to the west.”

Yarborough initially tried to get semi-loads of processed pork to consumers, but COVID-19 outbreaks in the packing houses nixed that plan. That’s when he started pushing for the delivery of live hogs direct to the consumer — an idea he said was met with skepticism at all levels.

“Most people thought we’d be lucky to sell 25-30 hogs,” Yarborough said when the program was getting ready to launch.

Instead, the program was a success beyond any of the wildest dreams of the partner organizations. Within a month’s time, four potloads of live hogs, more than 700 in all, were sold directly to consumers for $110. Considering the hogs weighed between 275 and 300 pounds and yielded between 160 and 190 pounds of pork, the meat ended up costing well under 75 cents a pound.

Yarborough was hopeful the program could be replicated in other parts of the state, but it turned out the so-called “hillbilly hogs” were only marketable in Western North Carolina.

Ward doesn’t expect the pop-up market programs to continue once the supply and demand cycle comes back into balance.

“This outlet is actually a creation of the disruption in the food pipeline,” Ward said. “If that is removed by some level of normalization of the markets, there is no need to interrupt of traditional business transactions between producers and the market.

This was a collaborative effort including a number of folks, all with the same motive of taking care of folks who are in need. That’s the driving the process that got such good cooperation among so many people.”

The Haywood County programs operating under the WNC Communities umbrella include:

The only local organization participating in the Farm Fresh Pop Up Shop program for produce box distribution was Fines Creek Community Association. The other organizations continued to rely on MANNA Food Bank to supply the needs of their communities.