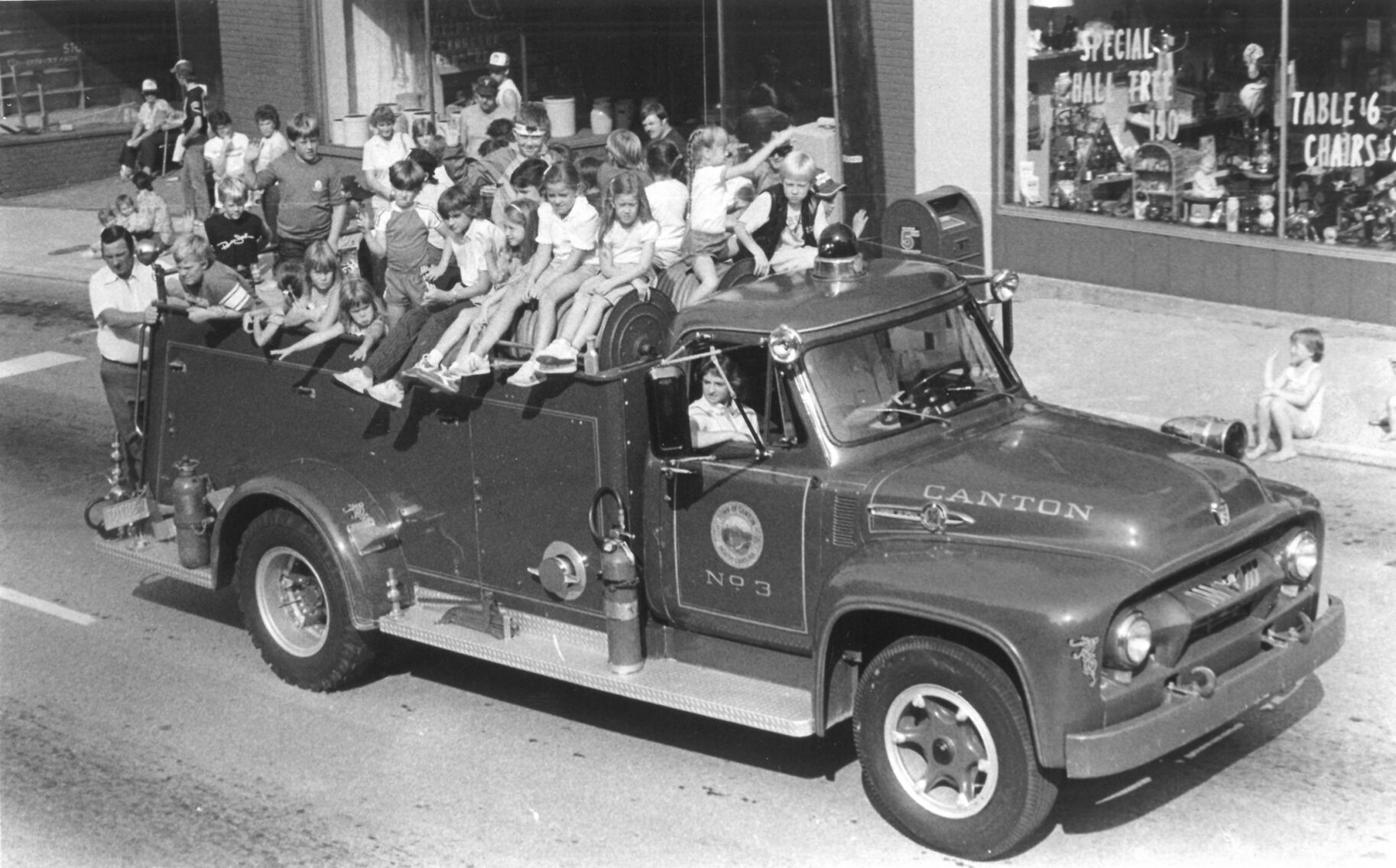 Canton shows off its fire truck, and its children, in 1985. 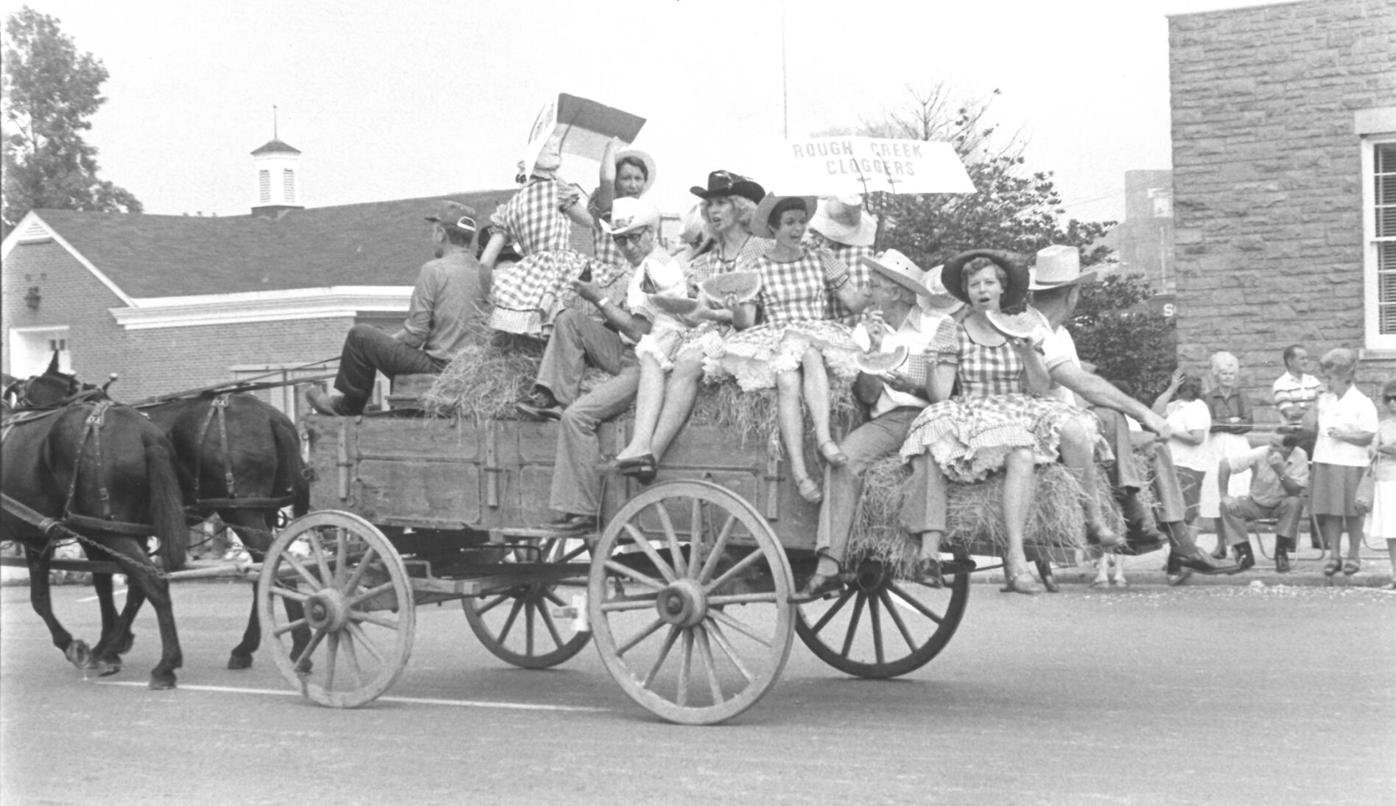 Canton’s Rough Creek Cloggers in 1979. Clogging and square dancing have long been featured in the Labor Day festival. 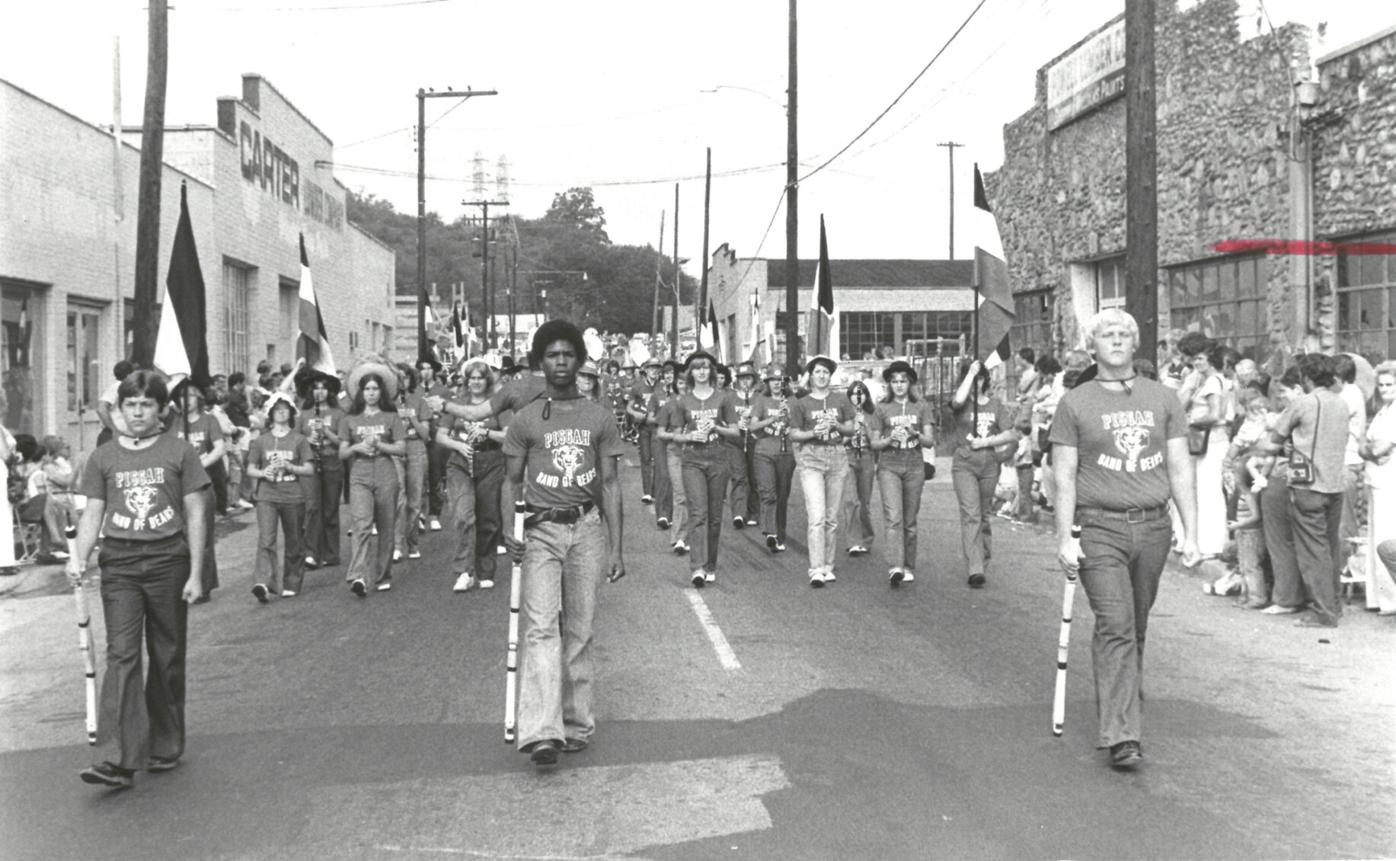 Pisgah High School’s Band of Bears in the 1977 parade. 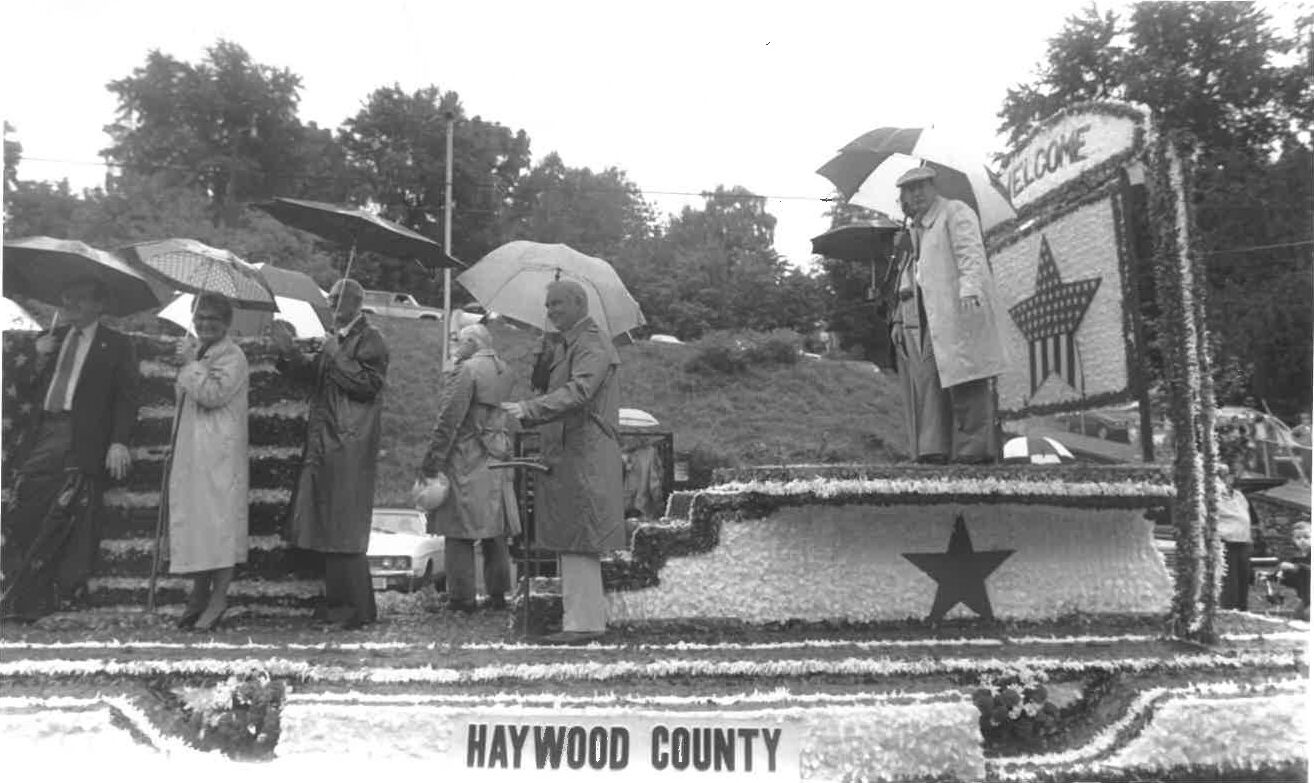 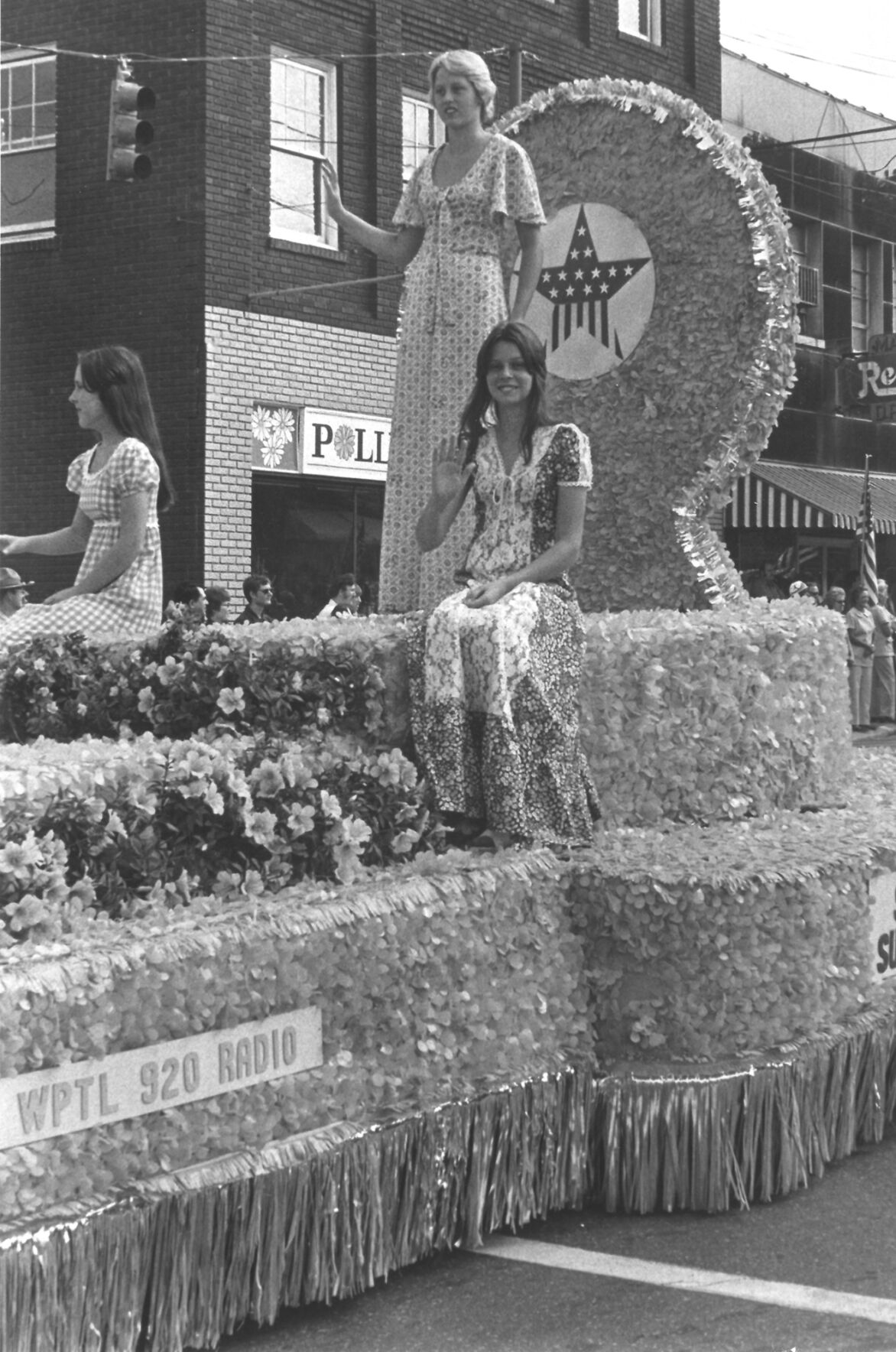 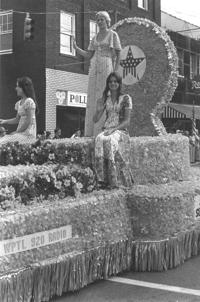 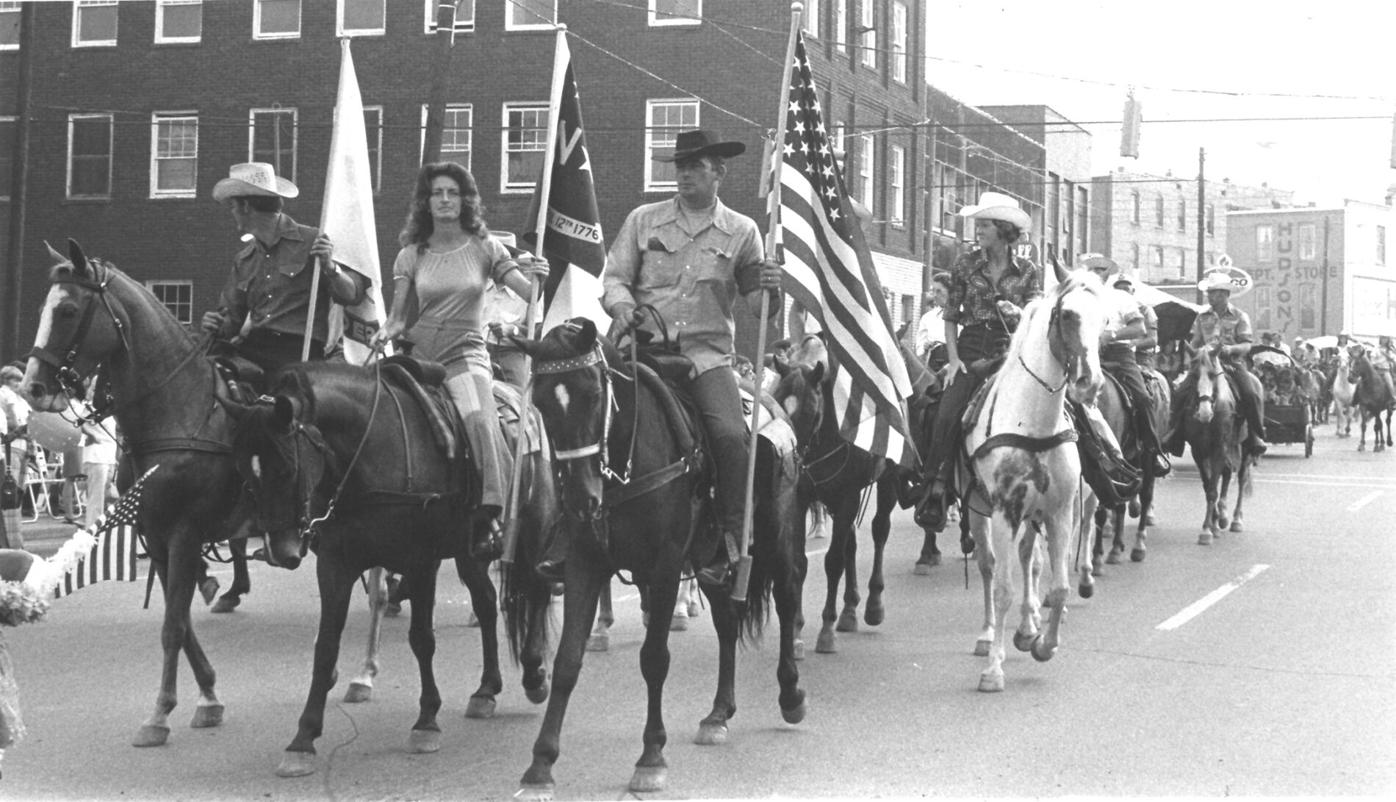 Members of the wagon train ride into Canton during the 1975 Labor Day parade. 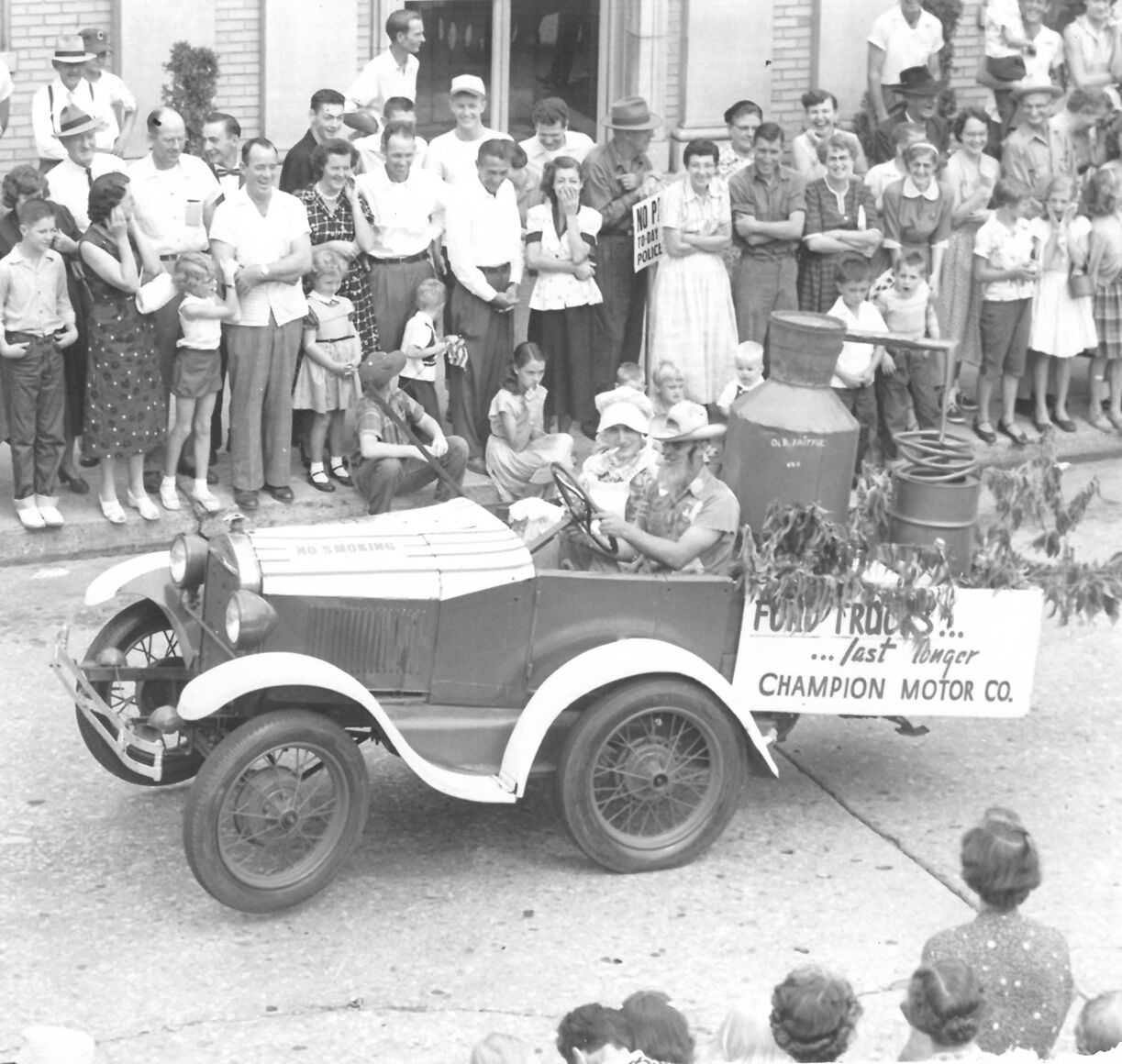 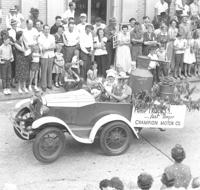 This Ford, one of several old-time vehicles in the 1955 Labor Day parade, showed off a functioning still and provided unusual advertising for Champion Motor Company. 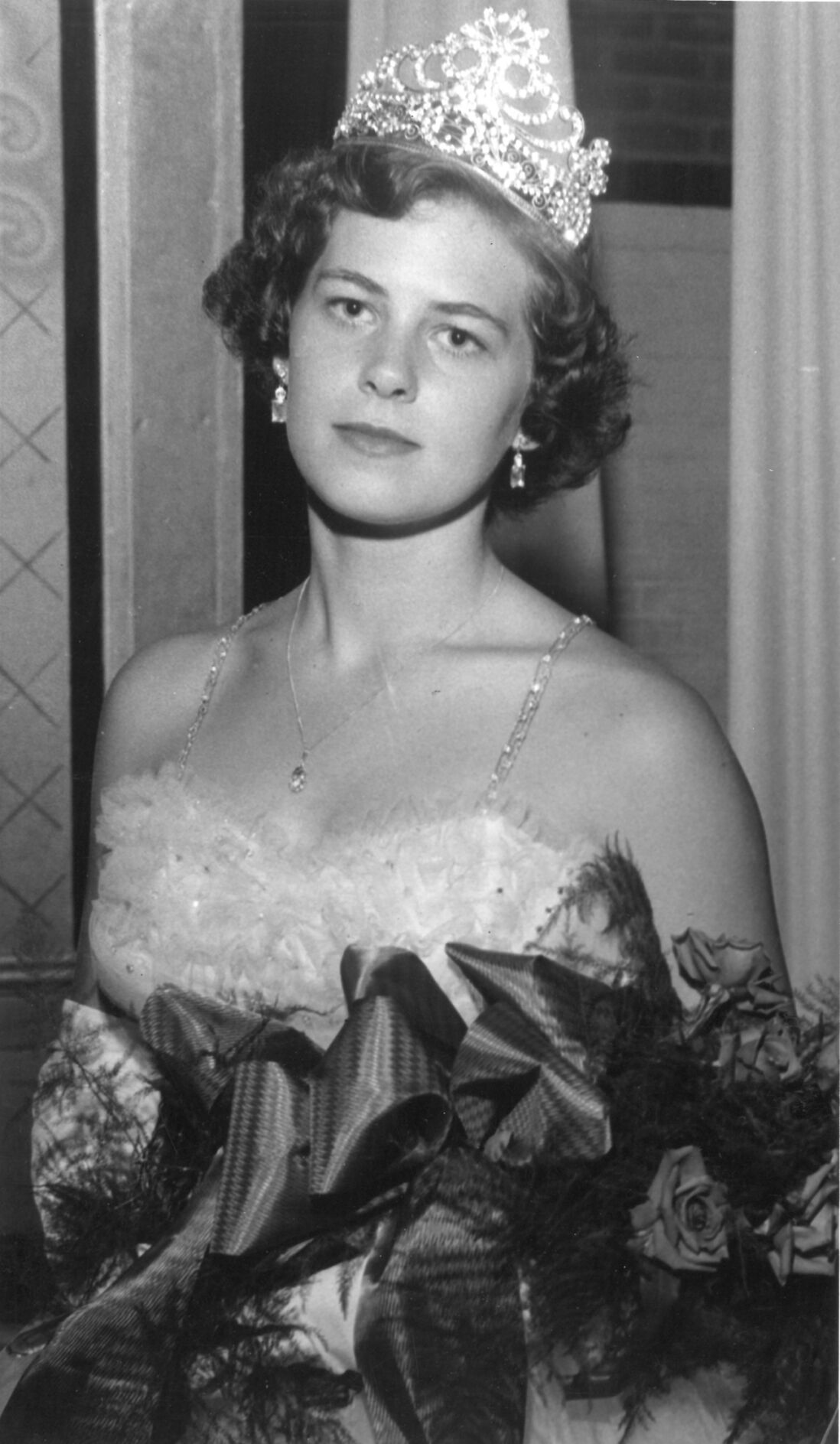 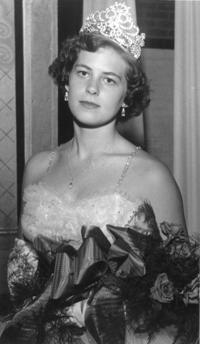 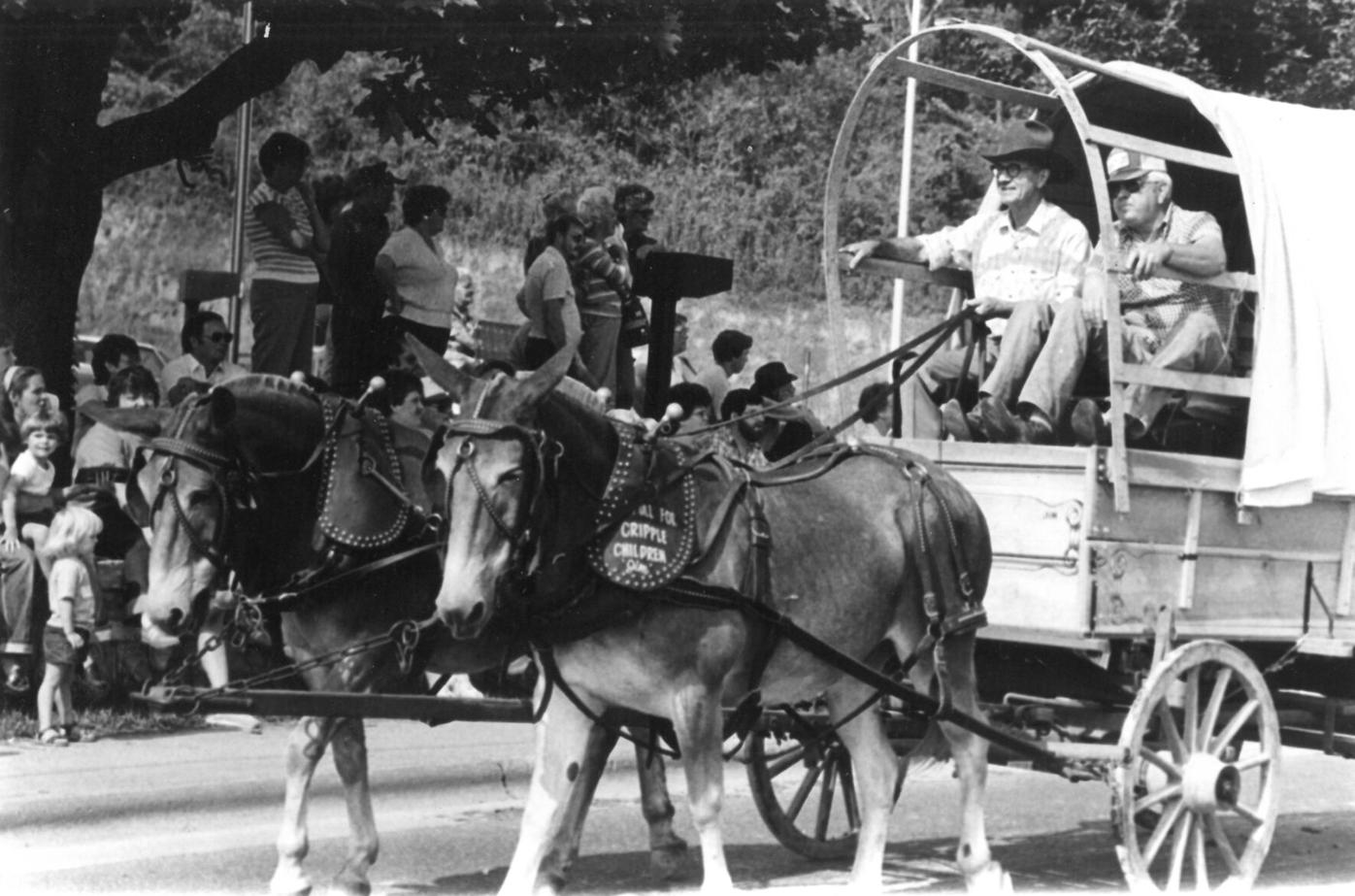 Wagon train rolls into Canton in a mid-1980s parade. 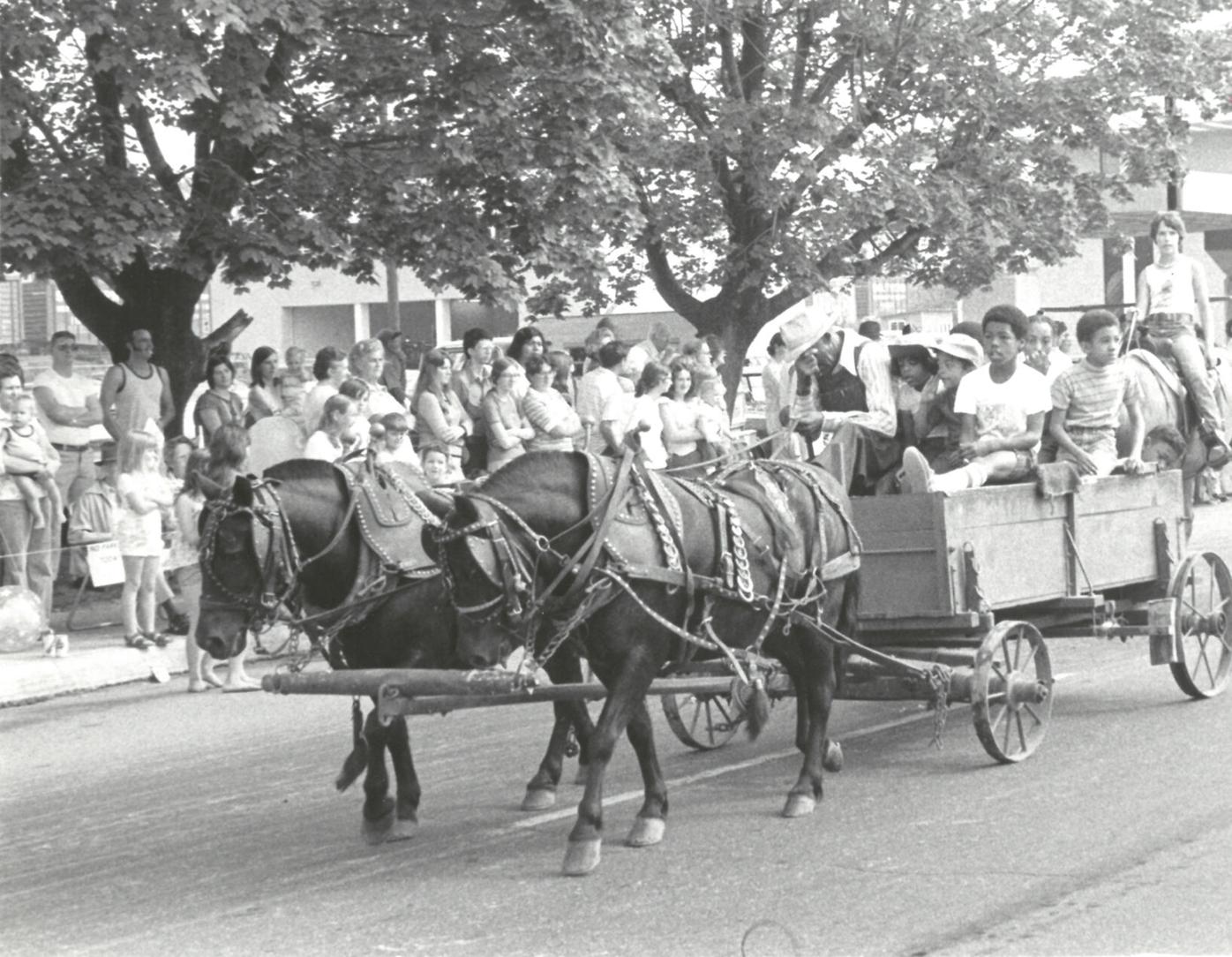 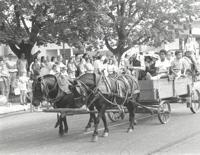 Excited children — and one apparently tired driver — in the 1977 parade.

Canton shows off its fire truck, and its children, in 1985.

Canton’s Rough Creek Cloggers in 1979. Clogging and square dancing have long been featured in the Labor Day festival.

Pisgah High School’s Band of Bears in the 1977 parade.

Members of the wagon train ride into Canton during the 1975 Labor Day parade.

This Ford, one of several old-time vehicles in the 1955 Labor Day parade, showed off a functioning still and provided unusual advertising for Champion Motor Company.

Wagon train rolls into Canton in a mid-1980s parade.

Excited children — and one apparently tired driver — in the 1977 parade.

Labor Day is a big deal — a BIG deal — in Canton, which claims the longest ongoing Labor Day festival in the Southeast. So having to cancel festivities for the second year in a row, thanks to COVID and the catastrophic flood of Aug. 17, is yet another wound on a painful and trying season.

Labor Day’s origins go back to the New York City Central Labor Union, which organized a festival in 1882 and proposed a day set aside to honor the nation’s workers. It became a national holiday in 1894.

Canton’s Labor Day festival actually predates the opening of the Champion Fibre Company’s pulp and paper, though the two events are intertwined. The festival began in 1906, while the mill began production in 1908. However, recognition and appreciation of the workers who were constructing the mill led to the first festival.

Pageants have threaded their way through the Labor Day festival. Women’s beauty pageants, judged on the basis of swimsuit and evening gown competitions, evolved into events where talent and speaking skills were also evaluated. In 1906, Pearl Coman Price became the first Labor Day queen, at age 16.

In 1932, women from throughout Western North Carolina were invited to compete in the “bathing beauty” contest, where Champion donated a prize of $30 to the winner. Baby pageants have also been a popular part of the Labor Day events, going back to at least 1949.

In 1951, the pageant opted for not one, but two, queens crowning Sylvia Comlin “Miss Haywood County High School” as well as Velma Moore as Labor Day Queen.

In 1953, 26-year-old Leonard Holder was crowned king of the Labor Day festival, participating in the “coronation ball” with 16-year-old Carolyn Campbell, who was queen. For about a decade, the festival had both king and queen, though there was not public competition for the male title; he was chosen by a special committee.

Canton at the lake

Canton’s Labor Day festival has not always been held in the town. In 1932, it was held at Lake Junaluska, under the sponsorship of Champion Fibre. Special rates and scheduled were arranged with Southern Railway so that the workers and families of Canton could easily and cheaply travel to the lake. The event included fireworks, a fiddling contest, athletic competitions and a hog-calling contest. About 18,000 attended.

From 1937 through 1943, Waynesville and Hazelwood jointly held their own Labor Day celebration, including parades and street dances. While Canton would normally draw 10,000 or more to its celebrations, Waynesville-Hazelwood boasted attendance of 3,000 to 5,000. (In 1938, the Waynesville officials estimated 3,000 had enjoyed the Labor Day parade; of those, about 1,000 were participants.)

In 1945, Waynesville leaders announced they would focus on developing a major July Fourth celebration. The tradition developed that west-Haywood towns would host the major July Fourth event, while Canton became the hub for Labor Day, with each town encouraging residents to attend both.

COVID was not the first illness to cause cancellation or delay of Labor Day festivities. In 1944 and in 1948, statewide polio outbreaks prompted closure of the festival. In 1944, the Labor Day event became a “fall festival” in the last week of September, including all the events originally scheduled for Labor Day. In 1940, a pair floods also disrupted Labor Day festivities.

Champion, which had a significant labor force from the Black community, did not omit those members from its Labor Day celebrations before the 1960s — but it didn’t fully embrace them, either. Athletic competitions, special worship services and concerts were sponsored for the “colored” community — but held separate from the “white” events, and were so labeled in the published schedules.

During World War II, both Canton and Waynesville featured “gasless” Labor Day Parades, thanks to rationing and the need to conserve fuel for the war effort. These parades featured floats drawn by horses or steers.

With corn harvest under way, law enforcement often put a damper on some Labor Day joy with moonshine still-busting raids over the holiday weekend. Newspapers include a number of accounts of those holiday raids throughout the county up through the 1950s. In 1921, 300 gallons of Georgia moonshine were confiscated at the West Canton Depot the Friday before Labor Day, and destroyed before an audience of about 200, the Waynesville Courier reported. The same day, law enforcement officers confiscated about 700 gallons of “shine” from a still 1.5 miles south of the Red Hill School, on the east side of Canton.

In 1966, Haywood County horsemen and women organized a “wagon train,” which has become a staple of the Labor Day festivities. During every Labor Day festival since, the horseback riders and wagon drivers take a two-to-three-day journey, camping each night and concluding the ride at Canton’s Labor Day parade. By 1976, the wagon train totaled more than 50 wagons and 100 horses.

Tragedy struck the wagon train in 2017, when a pickup truck slammed into two of the wagons as they made their way down Jonathan Creek Road. Two wagon riders, Jason Messer and Boney Summey, died, and another was seriously injured. The next year’s ride was made in honor of Messer and Summey.

The wagon train tragedy was not the first to strike the Labor Day festival. In 1921, 13-year-old Louise Young drowned in the YMCA swimming pool a few hours after the swimming competitions. “With several other children she had been playing in the pool. Finally deciding to take another swim, she dived off the board in the deeper end and before assistance arrived was unconscious,” the newspaper reported.

Major historical events have often coincided with Labor Day. The second in a pair of back-to-back catastrophic floods in 1940 hit just before Labor Day weekend. President Franklin Delano Roosevelt dedicated the Great Smoky Mountains National Park at Newfound Gap on Labor Day, 1940. And recognizing the historical value of Labor Day to the community, the Canton Area Historical Museum was dedicated on Labor Day, 1990.

Most of the information for this story was drawn from Waynesville Courier and Mountaineer newspaper accounts dating back to 1918.