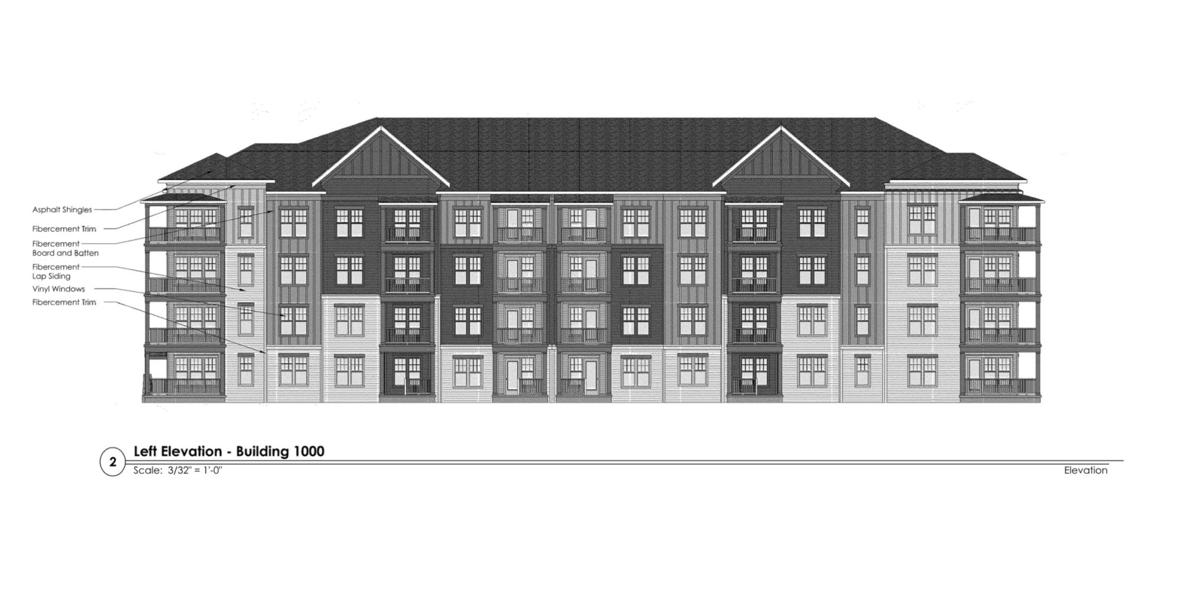 PRETTY BUT BIG — The apartment complex coming to the former BI-LO grocery store site in Waynesville will consist of two buildings up to 60-feet tall, with 210 units on nine acres. 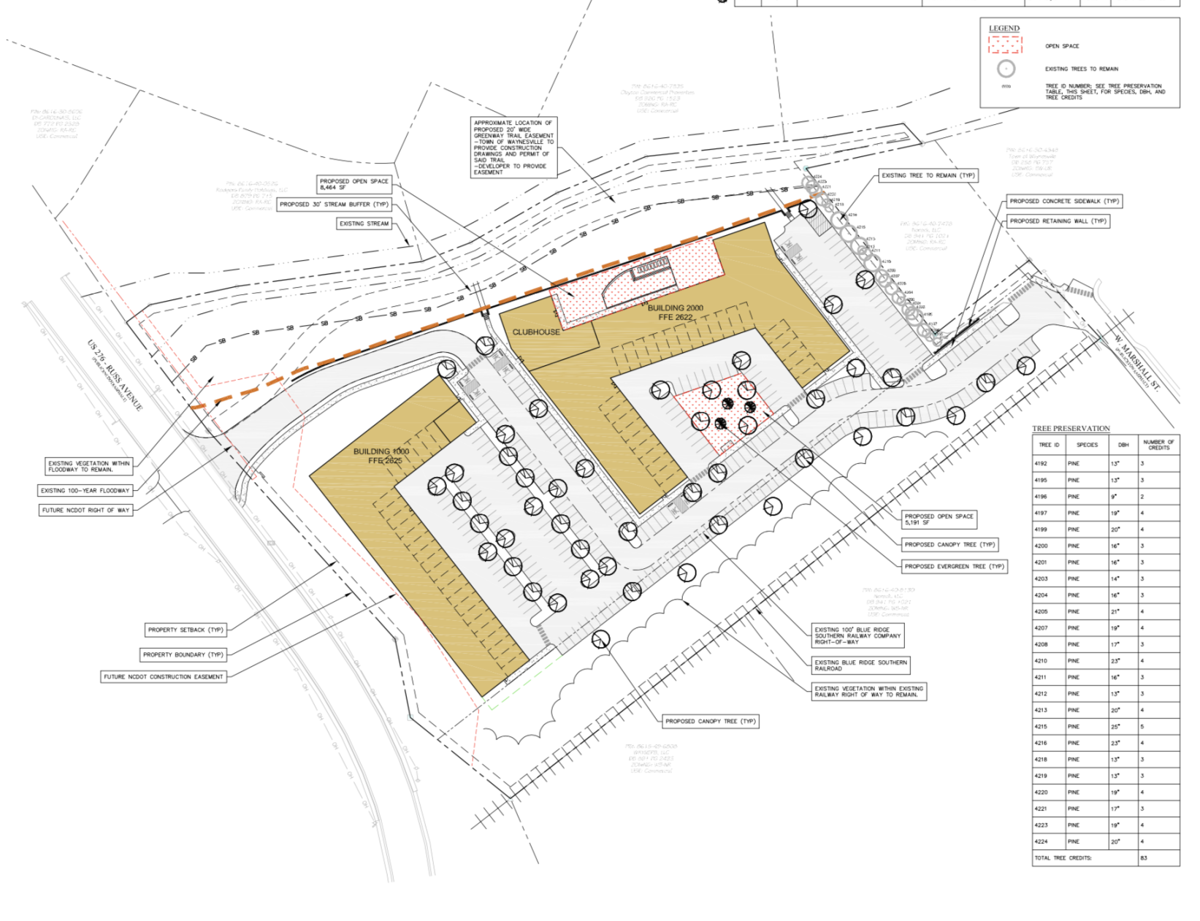 SITE PLAN — A site plan for the Mountain Creek apartment complex must pass two layers of zoning approval with the town of Waynesville. The developers pledged an easement along Richland Creek for a greenway.

A four-story apartment complex with 210 units is planned for Russ Avenue in Waynesville at the site of the former BI-LO grocery store.

The existing strip mall and parking lot would be bulldozed, turning the 9-acre site into a blank slate for the upscale Mountain Creek apartments.

“The goal is to provide residents with a first-class living experience in Waynesville,” said Ron Linsky, with Florida-based real estate firm RFLP. “We believe that this project will address a significant need for quality, fully-amenitized, market-rate, rental housing in the area.”

The project comes on the heels of the 200-unit Palisades at Plott Creek apartment complex, currently under construction with target completion of next summer. There’s also a 52-unit project underway on Allens Creek.

The rash of rental developments reflect an uptick in housing demand over the past few years, fueled in part by overflow from Asheville.

“We love the consistent growth that the Waynesville area has had over the past eight to 10 years. We are believers in the area, and that this growth trend will continue,” Linksy said.

While both the Plott Creek and Allens Creek developments met resistance from the surrounding community, the latest project is in a high-density, high-traffic commercial area devoid of adjacent residential neighbors. It will still have to clear zoning approval from the town planning board and board of aldermen, with a public hearing date to be set in the next few weeks.

The one-, two- and three-bedroom apartments are a stone’s throw from the Waynesville recreation park, shopping and downtown entertainment. The Mountain Creek apartment project is an example of smart growth “in-fill” development that Waynesville’s land-use plan has tried to encourage.

“It is reusing an existing site and creating housing in the interior of your urban core, where somebody can live, work and play all within walking distance,” said Elizabeth Teague, Waynesville Development Services director.

Linsky declined to say what the projected rent range for the apartment complex would be.

Developers have pledged to grant a greenway easement along Richland Creek, which flows past the site, helping with the town’s goal of filling in missing links in the greenway.

Despite rumors that BI-LO was pushed out by the apartment project, it was actually the other way around. BI-LO filed for reorganization bankruptcy last year and began jettisoning so-called “under-performing” stores. The Waynesville store was a target due to slagging business, stemming in part from increased competition in the grocery store market.

When the property owners learned BI-LO was on the way out last year, they decided it would be tough to find another anchor in light of three other grocery stores already along Russ Avenue, and began pursuing the idea of an apartment complex instead.

Meanwhile, other businesses located in the strip mall were put on notice their leases would not be renewed, and began the process of finding new locations, including Kim’s Pharmacy and Los Amigos restaurant. The strip mall is now totally deserted.

The infusion of 210 apartments in the commercial area would not only help address the housing shortage, but create a trickle-down economic impact.

“We anticipate the project will be a big positive for surrounding businesses,” Linksy said.

The 9-acre strip mall property has been owned since 2012 by the family-owned real estate and property management firm RFLP out of Tampa. It has a vast portfolio of commercial developments, including apartment complexes in Atlanta, Nashville, Philadelphia and Raleigh.

Waynesville got on the firm’s radar because the family owned a vacation home in Balsam Mountain Preserve, an upscale retreat in Jackson County. The previous owner of the strip mall was looking to unload it during the recession, and the family scooped it up for $3.375 million.

Below are some take-aways of the project gleaned from plans filed with Waynesville’s planning office:

• Building facades are aesthetically attractive, with an architectural style the developers are calling “mountain craftsman.” Each apartment has a balcony.

• The apartment buildings are four stories and 60 feet tall.

• The existing entrance off Russ Avenue would stay where it is now, as well as the rear cut-through to West Marshall Street near the town tennis courts.

• The apartments would have a pool and clubhouse along the side fronting Richland Creek.

• Part of the low-lying site is in the floodplain, witnessed by Richland Creek occasionally overtopping its banks and coming up into the parking lot. Plans call for a wider green buffer along Richland Creek, with an easement for a town greenway. The site would also be elevated out of the flood plain. Engineering plans would be developed after the project receives zoning approval.

• The expansive parking lot is currently a top culprit of run-off, with sheets of water streaming off the asphalt directly into Richland Creek every time it rains. Site plans call for reducing the impervious surface of the site by 1.5 acres and installing measures to capture and absorb run-off.

Apartments in the cards for BI-LO plaza

The impending closure of BI-LO grocery store in Waynesville could pave the way for a 200-unit apartment complex in its place.