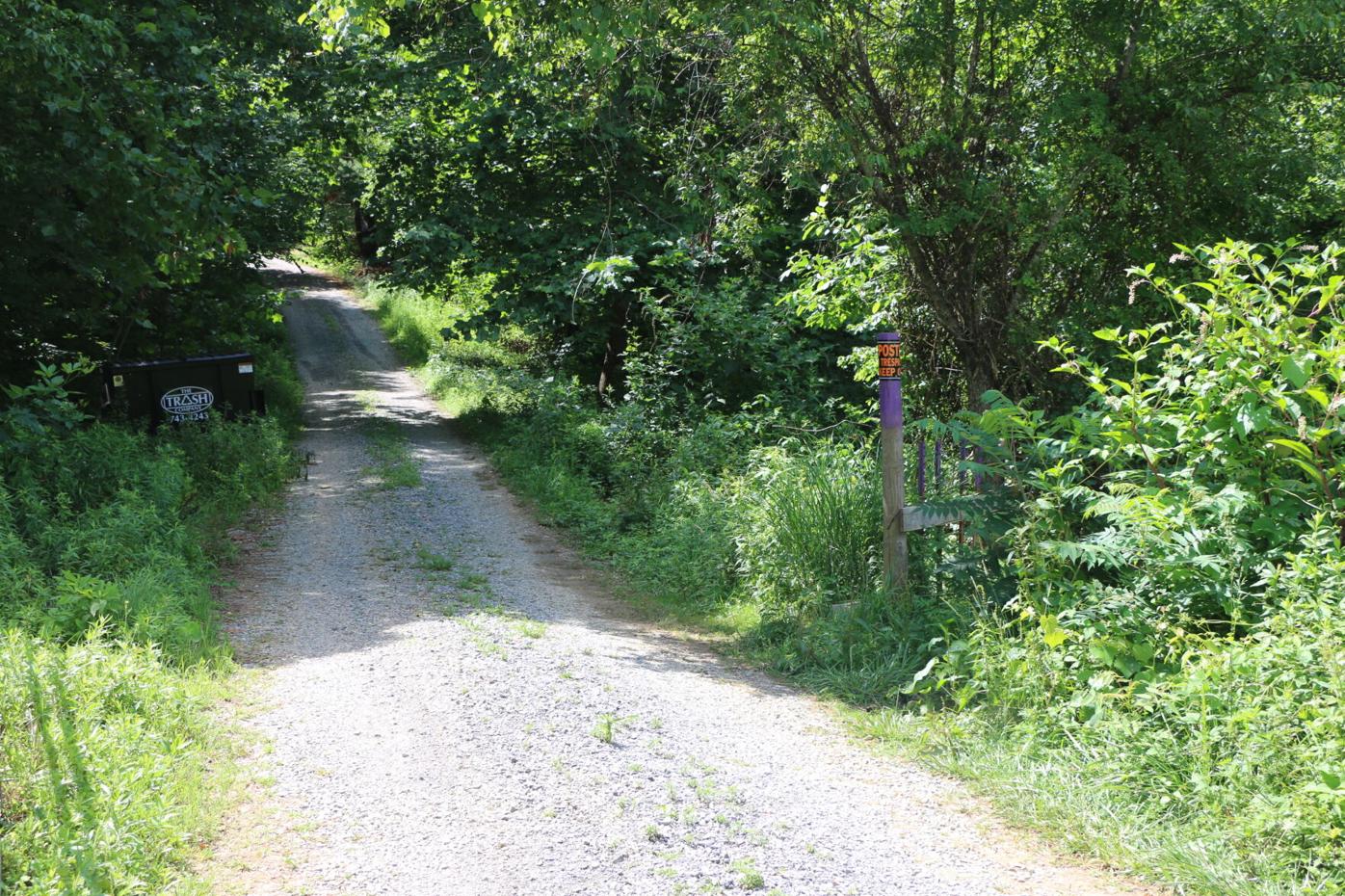 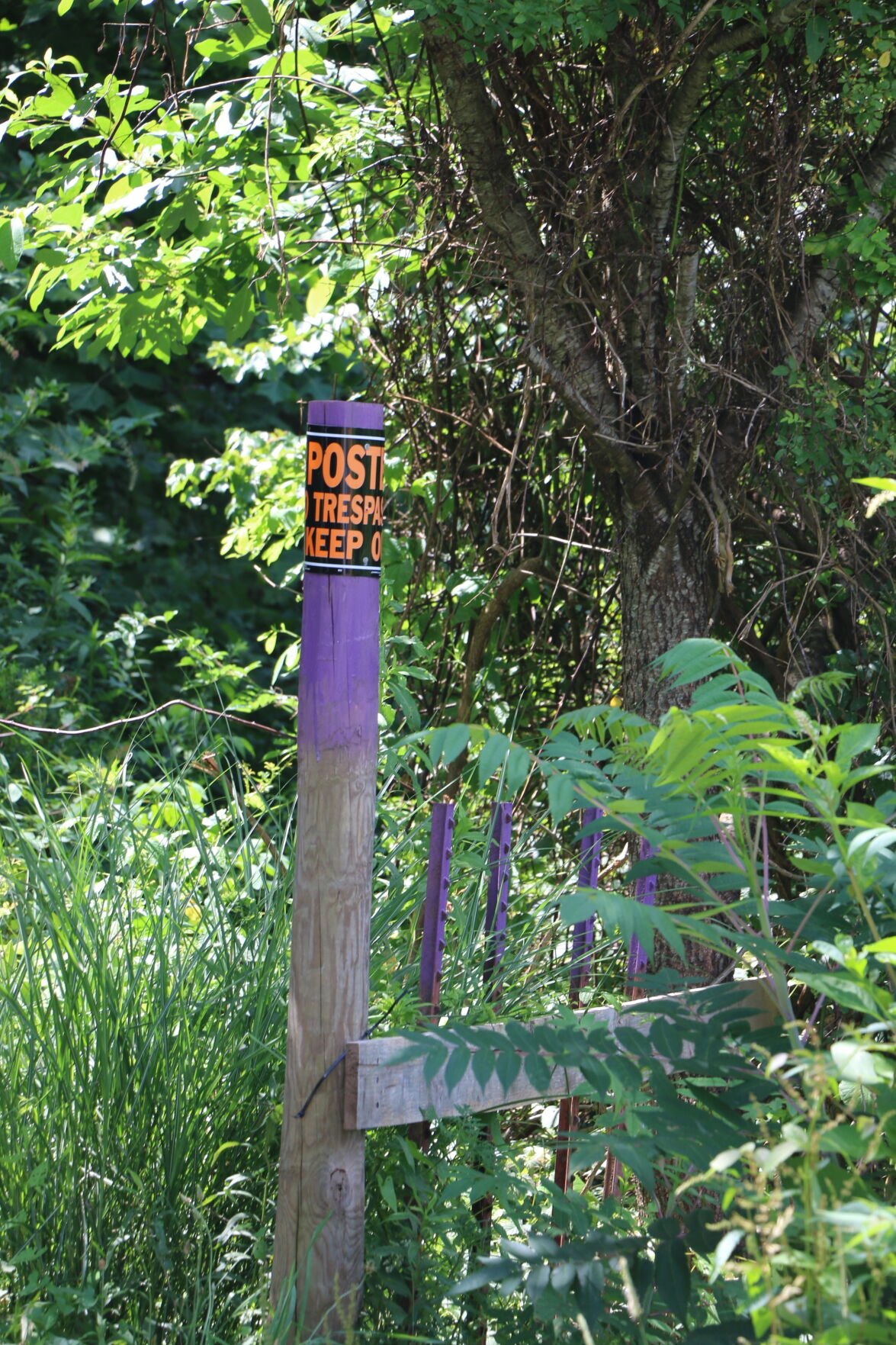 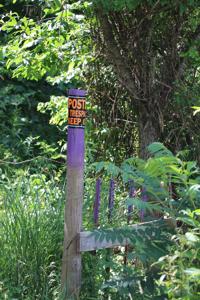 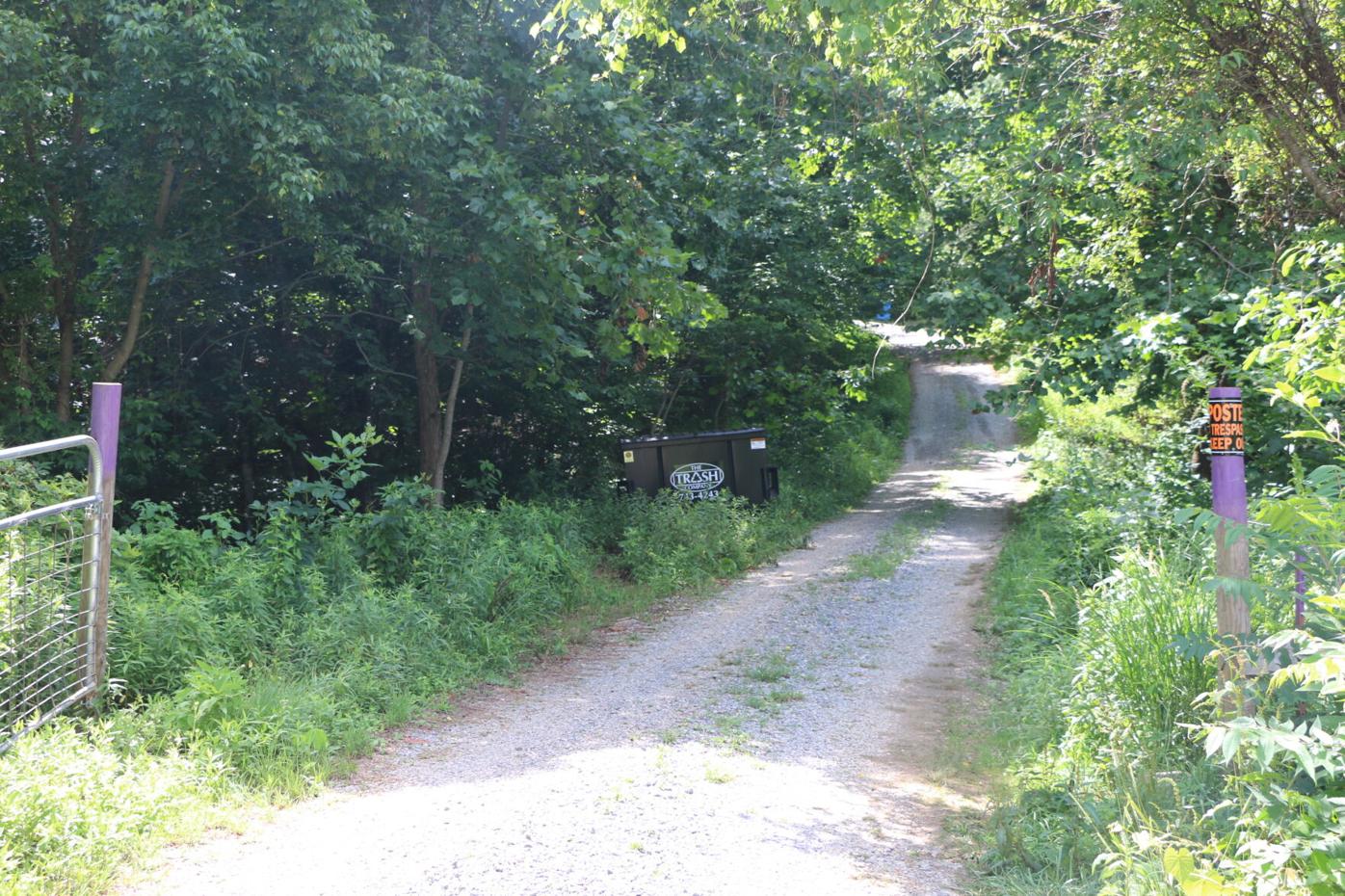 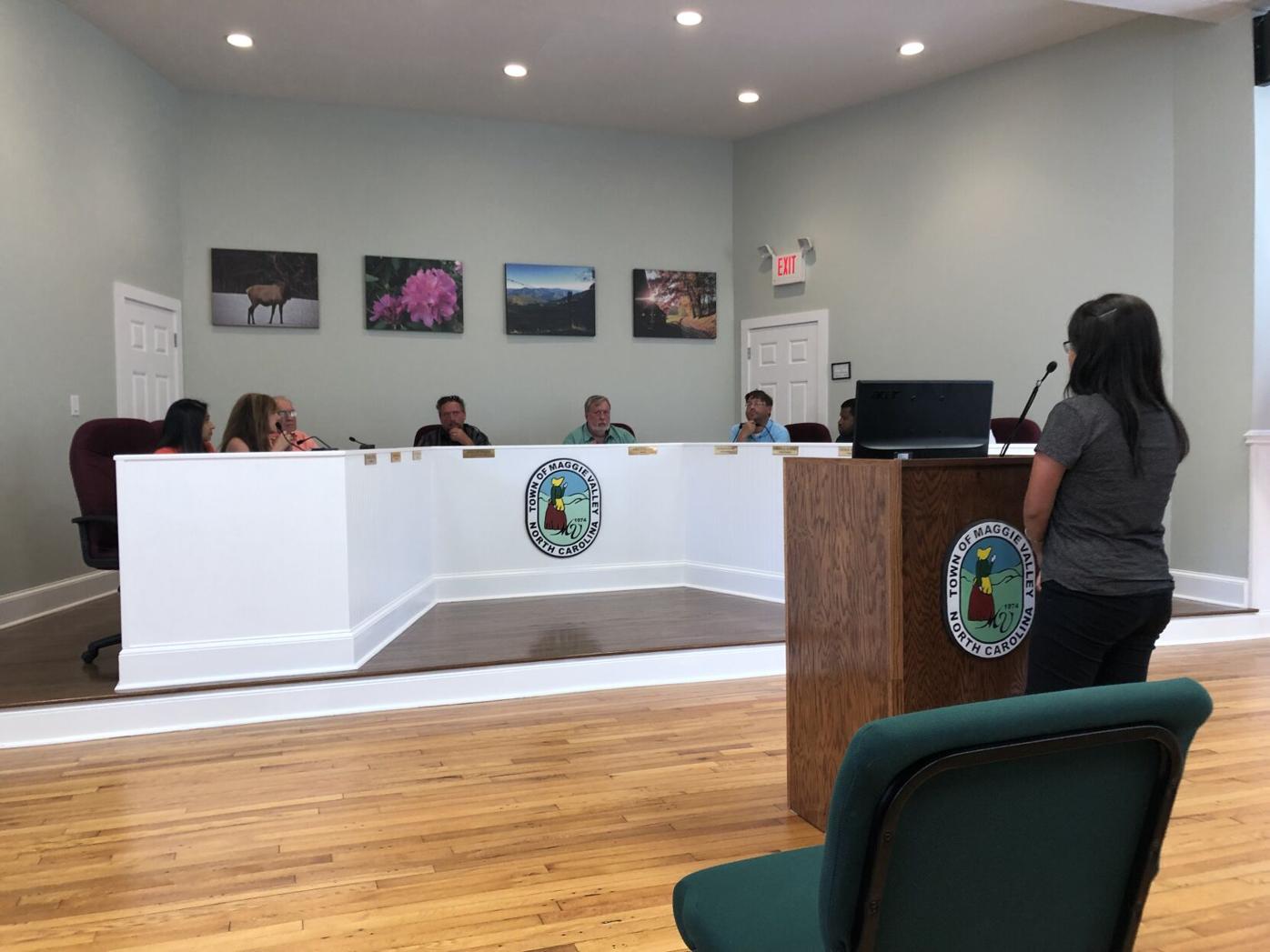 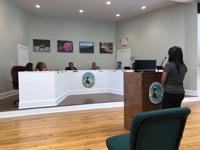 VOICING CONCERNS — Etzna Salazar was one of about a dozen residents to show up at a Maggie Valley Board of Aldermen meeting and one of four to make complaints about the Camp Bethel property. 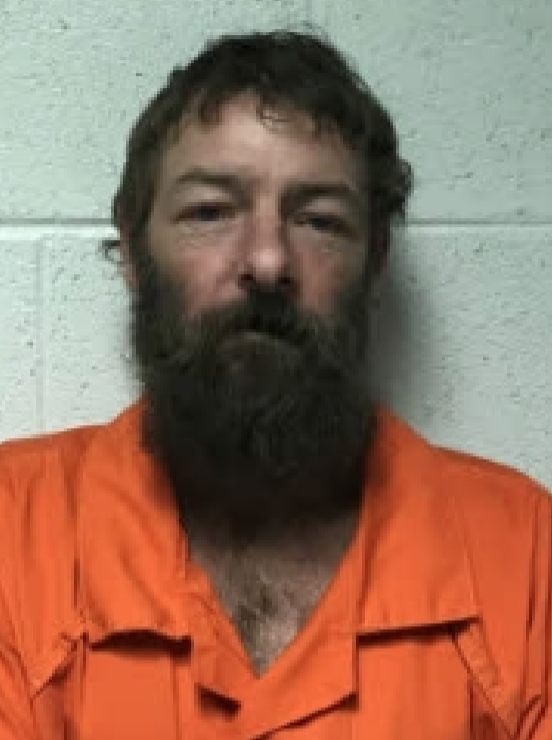 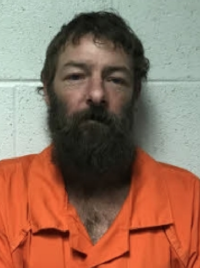 VOICING CONCERNS — Etzna Salazar was one of about a dozen residents to show up at a Maggie Valley Board of Aldermen meeting and one of four to make complaints about the Camp Bethel property.

Maggie Valley area residents are raising concerns that a group of people living in tents on a property near Jonathan Creek Road are becoming a nuisance and may pose a threat.

According to county records, the 37.4-acre property is owned by Camp Bethel Inc., a nonprofit for which Richard Bates is listed as president and secretary. Bates was recently cited by the town of Waynesville for violating zoning restrictions when he allowed people to stay overnight at the Bethel Resource Center, which was supposed to serve as an office space.

About a dozen residents living near Camp Bethel, which is technically in Maggie Valley city limits, turned out at last Tuesday’s board of aldermen meeting. Four of the residents spoke. The first, a woman who didn’t give her name, complained of trespassing and some minor property damage.

“There are constantly individuals, who happen to be male, walking up and down our road at all hours of the day and night,” she said.

Etzna Salazar said the issue has been ongoing for quite a while now.

“We’ve just now become vocal about it. It isn’t new,” she said. “It’s not only been a week. It’s been months, and there have been several occurrences. At this point, it’s an issue of safety and considering our space, and it’s not getting better.”

Mayor Mike Eveland said the town is aware of the issue. “I think within the next ‘x’ amount of days, you’ll see a police presence there,” Eveland said.

Some of the people who spoke at Tuesday’s town board meeting said Bates himself needs to answer for the activity on the property.

“I’ve had trespassing on my property,” said resident Joanie Hancock. “I’ve addressed these individuals, and I’ve also made phone calls to the individual who owns the land with no response. That’s three or four times.”

Patsy Wells said she’s had prior experience with Bates. While she didn’t elaborate what that experience was, she said it was “not great.”

“What I do understand is that this is the exact situation with the exact same landowner that just went through this exact same thing on South Main Street,” she said. “When that encampment was finally shut down, it was moved to the end of our community.”

“This is the second time this has happened,” she added. “Someone with deep pockets and the willingness to do whatever they want is very upsetting to our community.”

Wells noted that Bates was the original developer of nearby Bethel Village, which provides affordable housing for the community. “He touted it as a safe place for working single people or families with children,” she said. “It’s disconcerting.”

On April 23, Bates was cited by the town of Waynesville for zoning violations. A story in The Mountaineer from April quotes Waynesville Development Director Elizabeth Teague as saying clear rules were delineated and agreed to when the permit for the Bethel Resource Center was issued — rules that were not adhered to.

As time went on, neighbors and nearby business owners began complaining about people congregating at the building, lingering on the porch and even camping out.

“Several times over the course of the year, we have been aware of people sleeping on the porch and probably sleeping in the house,” Teague said, noting the town didn’t push the issue through the winter when people were in need. “It was really disappointing to us to hear from neighbors there were tents in the back yard and porta-johns set up which weren’t maintained.”

Other fire code violations included running a drop cord from the house to a storage building where an electric heater was plugged in, a second drop cord to a tent, and a power strip where multiple phones could be plugged in, Teague said.

Richard Bates communicated with The Mountaineer via email in April regarding the violations at the Waynesville property.

“After it was brought to our attention, we acknowledge the fact that they were in violation of local ordinances,” Bates said in the email. “We understand that those who enforce those ordinances are doing their job. We also appreciate that we were given time to take them down so that there was a level of dignity provided to their occupants.”

Bates did not respond to multiple requests for comment for this story.

Following last Tuesday’s town board meeting, Maggie Valley Police Chief Russ Gilliland spoke with the concerned citizens. Thursday, in an interview with The Mountaineer, Gilliland said officers went up to the property after hearing those concerns and were not greeted warmly.

“We told them about the trespassing and that kind of thing and we were met with resistance,” Gilliland said.

“I can say that a statement was made to one of our officers that they moved to that property to not have to deal with police,” he added.

Gilliland, who said there are about seven tents on the property, noted that while no arrests have been made on that property, his officers have made “drug arrests out of that area.”

In addition, Gilliland pointed out that his officers, state troopers and sheriff’s deputies were involved in a July 11 chase with a man, Matthew Wayne Irons, who came from that property “at a high rate of speed.”

According to court documents, a deputy responded to the area due to “a suspicious situation concerning a man enticing a juvenile into his vehicle,” adding that “at the time of the violation the defendant was speeding in excess of 15 miles per hour over the legal speed limit and was driving recklessly.”

It is also noted that Irons, 40, fled to elude arrest in the 2004 Chevrolet van he was driving by increasing his speed once the deputy’s emergency lights were activated. Irons, whose address on court documents is listed as Jay Bird Lane in Waynesville, also allegedly resisted arrest by fleeing on foot after getting pulled over.

The N.C. Highway Patrol trooper who eventually charged Irons with driving while intoxicated noted in the application for a search warrant to collect a blood sample that Irons was “very belligerent,” had a strong odor of an alcoholic beverage coming from his breath, had red, glassy eyes, refused to perform a field sobriety test and admitted to consuming alcohol.

Gilliland said officers will be ramping up patrols in the area, but added that he’s still worried about an increase of illegal activity on and around the property. “It is a concern,” he said.

Maggie Valley Town Manager Nathan Clark said the town has told its attorney to look at the current zoning ordinances to see what recourse it might have.

Clark said town officials have been aware of the situation since at least early June but were still somewhat caught off-guard by the severity of the problem.

“There are things that continue to develop that our small towns never planned on having to address,” he said. “It’s something that we are facing and we want to face them in the most responsible way possible.”