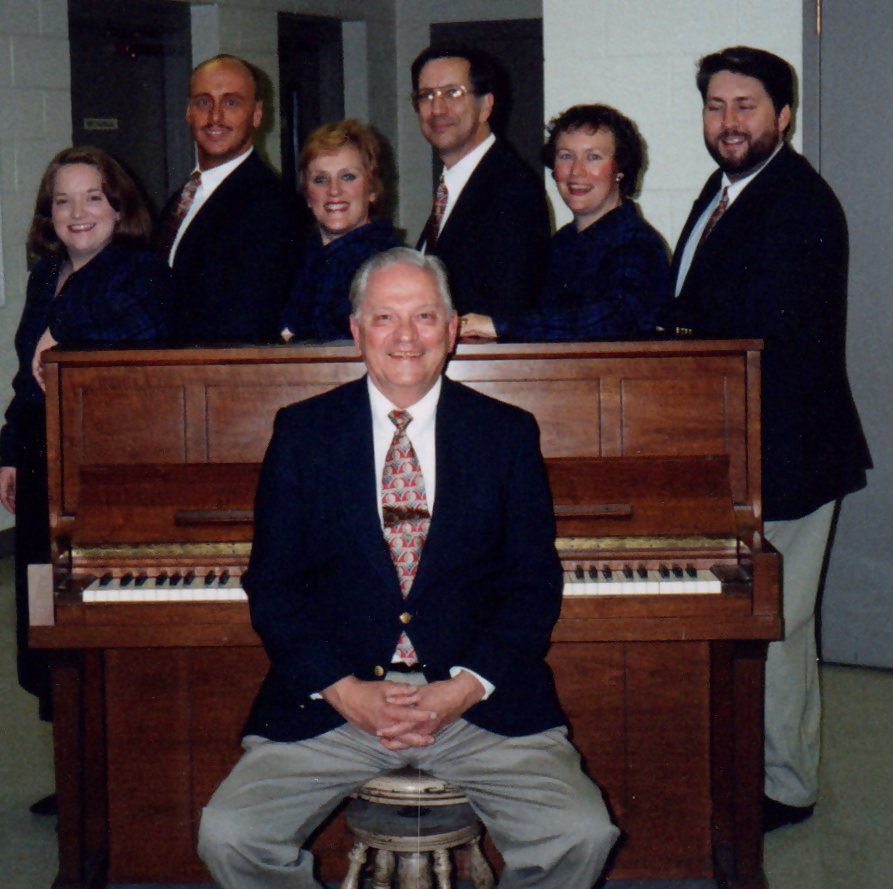 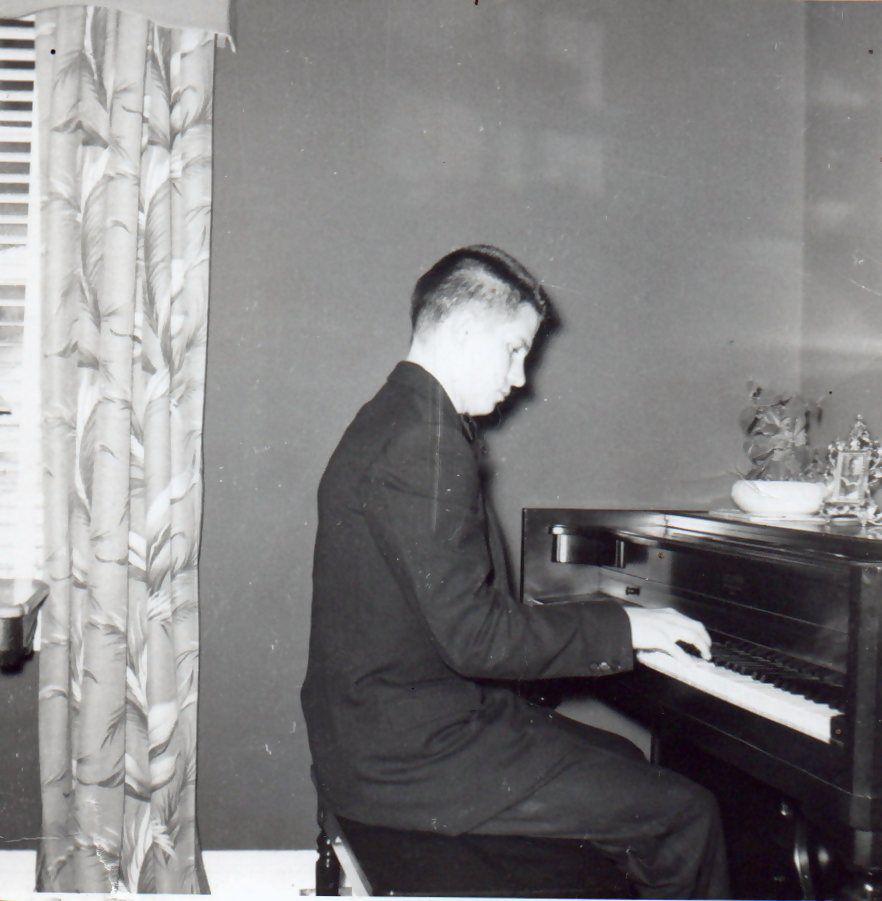 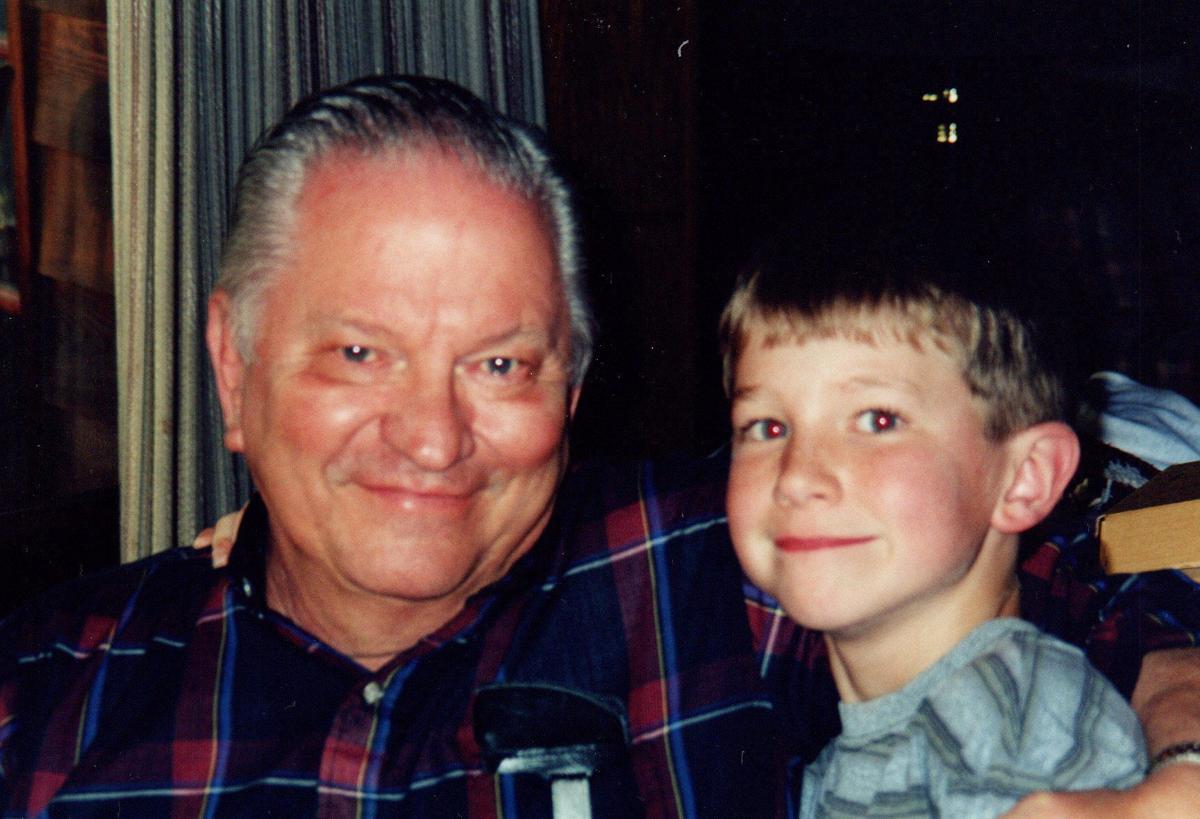 A FAMILY MAN — Dick Trevarthen with his grandson Reid. 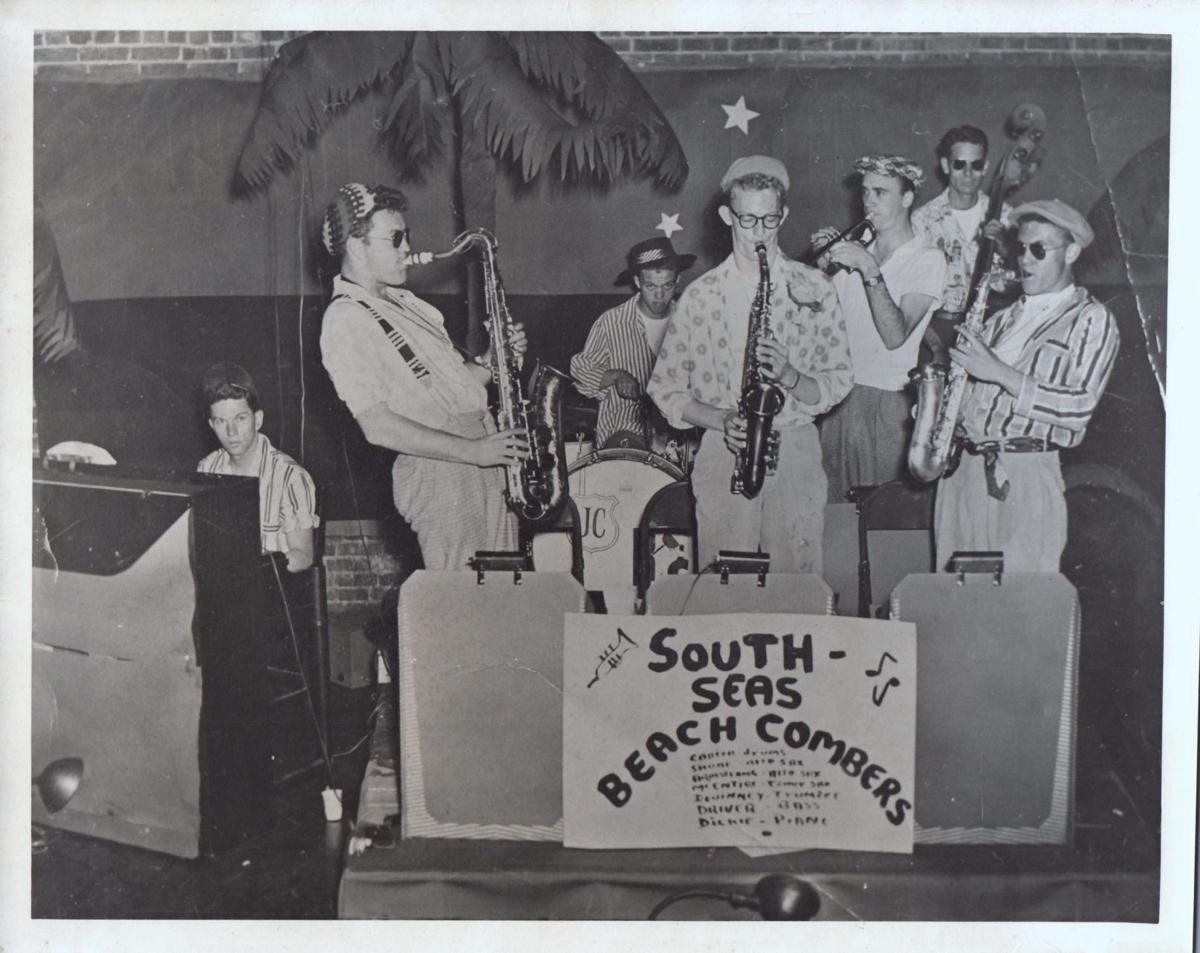 JAZZ COMBOS — Dick Trevarthen spent a lot of his career teaching, composing and performing with various jazz bands. Pictured above is Trevarthen on piano with a high school jazz combo. 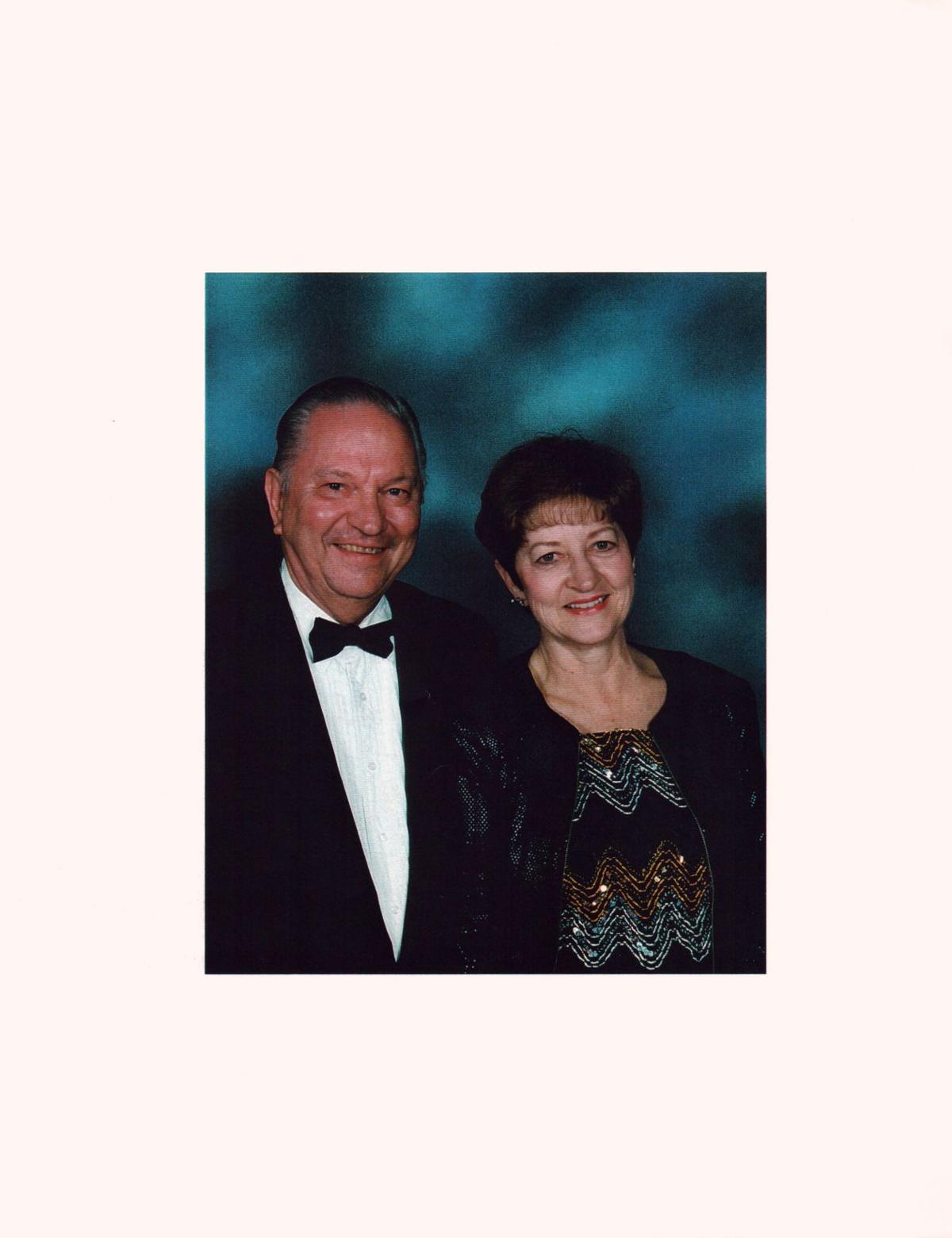 A FAMILY MAN — Dick Trevarthen with his grandson Reid.

JAZZ COMBOS — Dick Trevarthen spent a lot of his career teaching, composing and performing with various jazz bands. Pictured above is Trevarthen on piano with a high school jazz combo.

There’s a reason Dick Trevarthen is beloved by musicians across the area. Following 30 years on the music faculty at Western Carolina University, he has continued to share his musical creativity to the delight of performers and audiences throughout Western North Carolina.

“Dick is a true musical genius,” said his close friend percussionist John Barrett. “He’s an encourager and brilliant theorist with a passion for all styles of music.”

Trevarthen knew from a young age that music would be his life. His dad played the drums in a jazz band, music Trevarthen loved. After graduating from Gastonia High School, he enrolled at Duke University where he earned his Bachelor of Arts degree with a focus on music.

“The Duke Ambassadors was a jazz band in which I played piano and trombone,” he said. “I then traveled to Europe with a concert ensemble called the ‘Kids From Home’ that performed for our military service members stationed overseas. While we were in North Africa, Billy Eckstein joined us for a week during the tour.” Eckstein was a world-class American jazz and pop singer and bandleader during the swing era. “He was a most affable man,” remembered Trevarthen.

David Teague, a retired music teacher in Haywood County Schools, has wonderful memories of what Trevarthen brought to the local music scene.

“While I was a student at WCU,” said Teague. “I was intimidated by the sheer mental scope of Dick Trevarthen. He could discuss the orchestration of Stravinsky’s Petrushka in one moment and relate that to the chord progression of ‘Body and Soul’ in the next. He has always approached music holistically not just historically. As an undergraduate I was incapable of grasping that, but now that I’m 69, I may be getting a glimpse of what Dick was talking about. He’s an amazing person. The words get used quite a bit today, but few other words really encompass the scope of the man.”

After Duke, Trevarthen enrolled in the renowned music program at the University of Michigan for a master’s degree in music theory and composition. While there he had a memorable encounter with William Revelli, the legendary and intimidating director of bands at Michigan for 36 years.

“I plan to be a music director,” he said.

Since Trevarthan didn’t have time to play in a Revelli band at the time, a surprised Revelli looked directly at him and said, “Then you have to be a genius, and you are obviously not a genius.”

With master’s degree in hand, Trevarthen came to Western Carolina University in 1958 through the encouragement of a good friend who sang with the Robert Shaw Chorale and was from Murphy, N.C. He told Trevarthan that Western needed a person to teach music theory and be the band director.

In addition to the years at Western, Trevarthen led many musical groups in Western North Carolina. Three still meet today.

He was co-founder of the Smoky Mountain Brass band in 1981. He was also founder, director, composer and arranger of the jazz ensemble that eventually became the Blue Ridge Big Band. In addition, with Barrett’s encouragement, he arranged some of the music for the Haywood Community band which started in 2002 and was a conductor this band for a short time a few years later.

Rhonda Kram is owner, along with her husband Lee, of the Stone Cottage Band Instrument Shoppe on South Main in Waynesville.

“I remember playing in both the Haywood Community Band and what became the Blue Ridge Big Band in the early days with Mr. Trevarthen at the helm,” she said. “He was good at getting everyone together and pushing just hard enough to get us to play our best. When you played something a little off key, instead of stopping and pointing it out, he had a funny way of glancing your way while making eye contact and twitching his eyebrow just a bit. Nothing dramatic, just enough to let you know he heard it. You know he heard everything!”

Trevarthen was a go-getter, she said, noting he would see a need and decide to fill it. When Haywood County resident Bob Hill founded the Haywood Community Band and had to be out for a while due to surgery, Trevarthen stepped in and conducted the band.

“I doubt everyone realizes how many hours Dick spent working on his craft, often into the late hours analyzing, composing, arranging, and writing,” said Bruce Henderson, who plays tenor saxophone in the Blue Ridge Big Band and is also a long-time friend of Trevarthen’s. “He is respected by many and continues to consult and analyze and arrange pieces. It takes a special mind to understand music theory at the level Dick does. More than performance, I think Dick enjoyed the detailed analysis of music from a theory standpoint and the evolution of music at all levels.”

“We performed under Dick’s direction as a big band at Lake Junaluska’s Terrace Hotel at least three times over the years. Every time we played for people, whether in a combo, full band, or the DT Strutters singing group, Dick shared history and anecdotes behind each tune with the audience. He sometimes even shared some basic theory behind the compositions, stories about the composers, and audiences loved his teaching and sense of humor.

“We all knew that we could rely upon Dick to provide the absolute correct downbeat, the right tempo, the right dynamics, at the exact right moment, and you felt secure knowing that Dick was directing the orchestra. While rehearsing, when anyone missed a cue or pitch, Dick immediately corrected it, and we all knew that same mistake would not happen again. He was never loud. He did not have to be. When he spoke, his musicians listened.”

Bob Buckner taught alongside Trevarthen at Western and has collaborated with him for years.

“Dick came to WCU to teach theory and band. Along the way he taught low brass and collaborated in the writing of a textbook that taught music theory and music history in the same curriculum. My favorite experience during college was playing in a combo with faculty members,” recalled Buckner. “I was an okay bass player (the only one available) so I spent a lot of time playing dance jobs with Dick, Aaron Hyatt, Bill Curtin and more faculty. I’m pretty sure that I learned more about theory on those jobs than I ever did in class. He was relentless in making me better and shaped many of my musical values.”

“My first job was at Sylva-Webster High School (now Smoky Mountain),” said Buckner. “So, I continued to play gigs and to stay connected with WCU and the Music Department. Dick had begun writing marching band arrangements for the Tuscola (then Waynesville Township High School) marching band which was by far the best in the state. I asked him to write for my band and he agreed. He continued to write for me until I left Sylva in June of 1979. His arrangements brought out the best in my band and in me.

Buckner said he and Trevarthen began working together writing shows for other bands about this time.

“We would program the musical selections for a show,”Buckner said. “He would write the music, and I would write the drill. In 1979 we formed a business, United Music Enterprises, which I still operate today. To say that he was a prolific writer is a major understatement. His work ethic was unmatched and some of my favorite memories are of him pounding on the piano in his basement, playing, singing, and occasionally kicking the piano (for percussion) as he introduced his arrangements to me. Dick inspired me more than he knows, and I continue to appreciate the gifts he shared.”

It was Trevarthen who helped organize a local jazz band around 2000 or so, said Teague.

“Turned out it was so enjoyable that we kept the band going. The name was changed from the snappy Haywood County Jazz Band to Good Times Jazz Band around 2007,” he said.

When Teague took over leadership, the group played at the Waynesville Country Club, Laurel Ridge CC, Alfredo’s in Maggie Valley, as well as The Gateway Club, and Harrah’s Casino Resort in Cherokee.

The baton then passed to Chris Ulery. The group is now under the direction Dr. John Entzi who conducts and is lead trumpeter. Entzi is a retired university professor of 44 years who has taught at every level of music education.