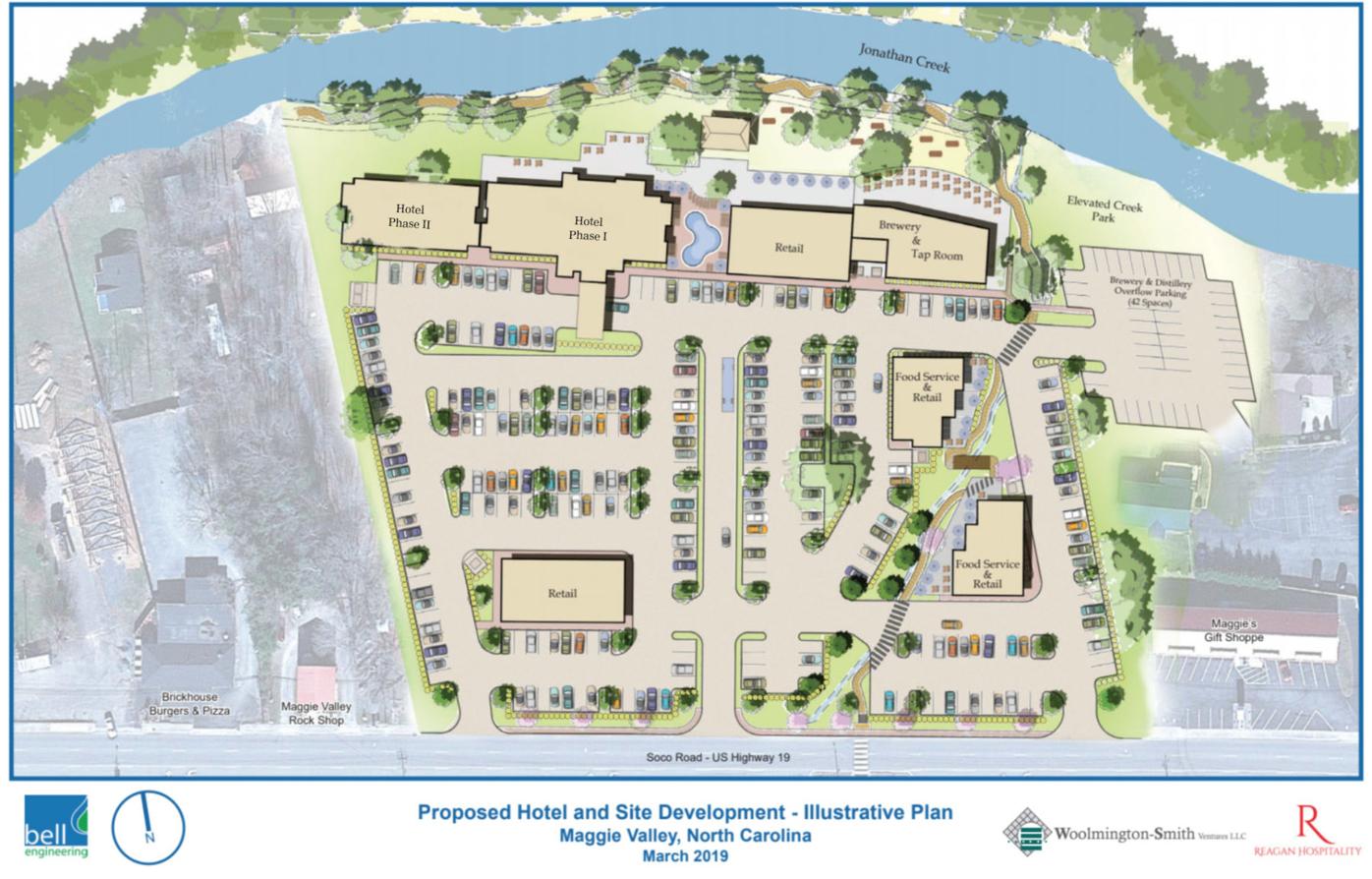 GRAND DESIGN — Here’s a look at Craig Woolmington’s plan for a 6-acre tract in the heart of Maggie Valley and next to Jonathan Creek. 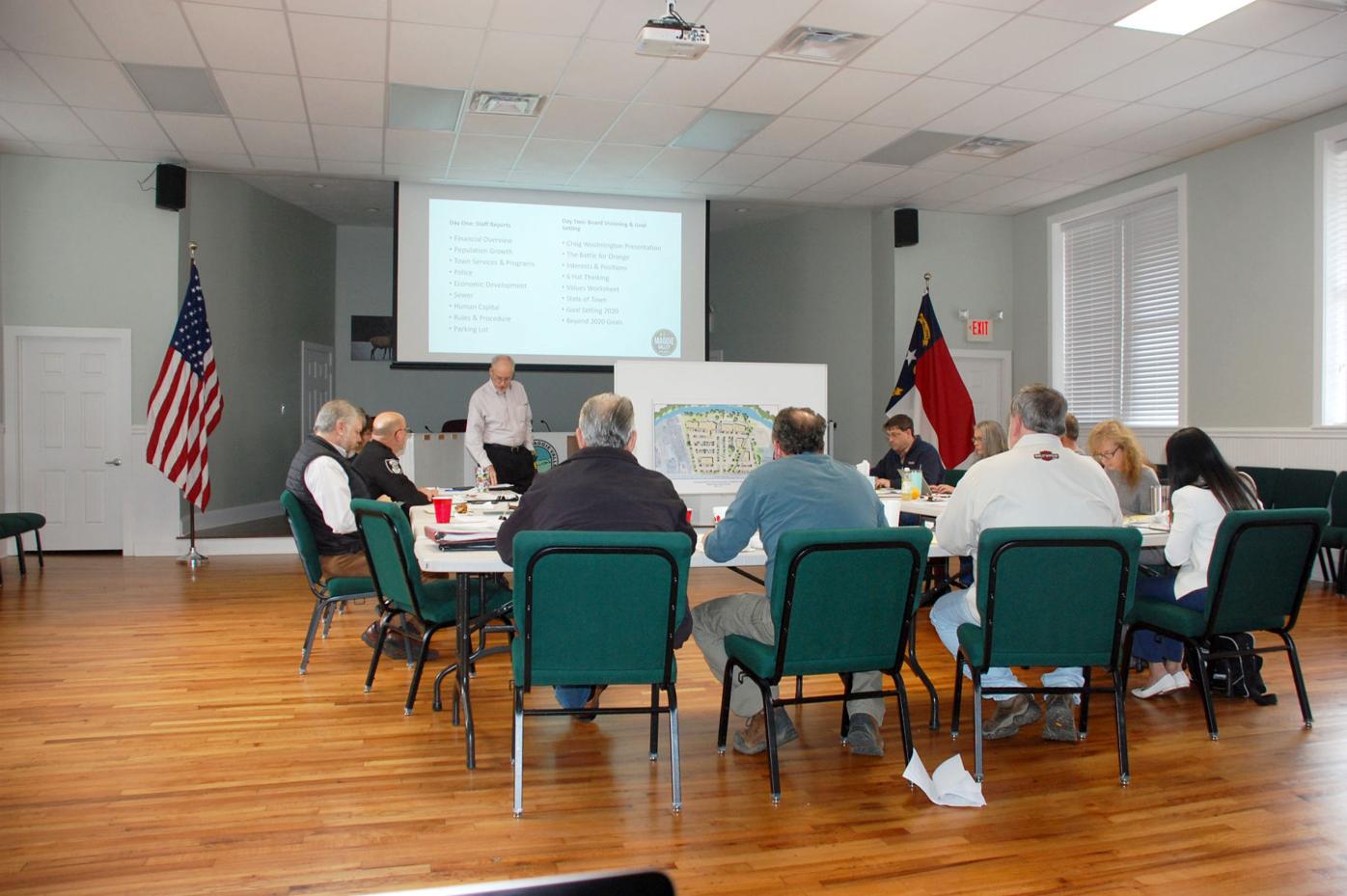 A LONG-AWAITED PRESENTATION — Here’s a look at Woolmington describing the project to the town leaders at a meeting last month.

GRAND DESIGN — Here’s a look at Craig Woolmington’s plan for a 6-acre tract in the heart of Maggie Valley and next to Jonathan Creek.

A LONG-AWAITED PRESENTATION — Here’s a look at Woolmington describing the project to the town leaders at a meeting last month.

It’s been a long time in the making and a long time under wraps, but plans for a large development adjacent to Elevated Mountain Distillery have finally been made public.

The plans were discussed for the first time in an open meeting last month when property owner and hopeful developer Craig Woolmington made a presentation to the board.

The proposed development would eventually include a hotel, brewery and multiple other spaces. The main draw, Woolmington said, would be Jonathan Creek, which runs right behind the property. Perhaps most important for the town, the plan also features a contiguous greenway that would connect that property with Elevated Park to create a long walking path along the creek.

Last week, Woolmington discussed, in detail, the nature of the project with The Mountaineer via email. The plan is for an “upscale mixed-use development” that will be anchored by a hotel. The 6-acre property would offer creekside dining next to the brewery and taproom.

“As you have seen in Asheville, most of the large breweries want to be next to the French Broad river, so we believe that this site adjacent to Jonathan Creek and the large green space and future public greenway will help us attract a high quality brewery/taproom that will include brewery tours,” he said.

The site plan calls for four other buildings, including an arts and crafts gallery featuring higher end artwork from local and regional artists and buildings designed for small retail and independent food service.

The next step in the process is to build the 150-room hotel, which is going to be built in two phases.

“Phase one will be 80 rooms, and phase two will add another 70 rooms,” Woolmington said.

Woolmington said it’s important to note that while he owns the land, the hotel would be owned and operated by a “separate entity,” which hopes to begin the second phase of construction within five years.

“They will build, own and operate the hotel (both phases), and I will be developing the remainder of the buildings and managing the entire project like a shopping center,” he said. “We expect to own all of the other buildings with the possible exception of the brewery building.”

Woolmington said he hopes to break ground this year.

“We do not want to announce any firm dates for the start of construction because there are still some issues to resolve including final project approval from the Town of Maggie Valley, not to mention potential curve balls like economic downturns or potential pandemics,” he said. “We are waiting to see if the coronavirus scare will cause any of our partners or lenders to hold back until it’s over. Personally, I think that this scare will make it more likely that people will travel domestically, but logic is always in short supply during times like this.”

Woolmington bought the land he now hopes to develop back in 2007. After permanently relocating to Western North Carolina, Woolmington began working on design concepts while he waited for the market to be more hospitable to such a large project.

“I started negotiations with the hotel group two years ago and have been working on the master site planning for 18 months,” he said.

Woolmington began working with the town back when current Town Manager Nathan Clark was working as the planning director.

“Both he and the previous town manager have been great to work with and have helped shaped the plan to what it is today,” he said. “Back when I first met Nathan Clark he stressed the importance of keeping this large parcel intact, and not subdividing it, so that it could be developed as a larger development project that would help to revitalize Maggie Valley. I have come to learn that he was absolutely right. I have been through several election cycles and worked with many different board and their staff. Nathan Clark , the new Mayor and Board of Alderman have been great to work with. They have been very supportive of our project and believe as I do, that that a large, high quality development like this would be a very good thing for the Town. I really believe in the potential of Maggie Valley. It just needs good, strong leadership with a vision, which I believe it now has.”

Woolmington said in his presentation to the board of aldermen that he had been in the shopping center business in California for over 40 years. In addition, he gave presentations to local leaders and business owners in smaller towns designed to help downtowns compete against larger shopping centers.

“Over my long career, I learned how to create successful retail developments and the importance of having the right ‘anchor’ tenants that would make the project successful,” he said. “How to do this in Maggie Valley has been a struggle because there are not enough year-round residents to support most traditional retail. This is why they don’t even have a supermarket. Accordingly, I’m trying to create a project that is large enough and architecturally unique so that everyone passing through town will want to stop in to see it.”

This project will have a tremendous impact on the town.

Current cost estimates are about $19 million. Based on the town’s tax rate, the $10 million first phase would generate $43,000 in property tax revenue annually. In addition, it is expected that the people drawn in by the project would also spend more money both at the new businesses on that property and other nearby businesses.

In addition, the greenway is expected to be a big benefit to the town.

“You don’t usually think of the greenway as an anchor tenant like a business, but my belief is that it will serve as a major draw for both locals and tourists alike, just like an anchor tenant,” Woolmington said, adding that Elevated Mountain Distillery owner Dave Angel has been enthusiastic about the opportunity.

“When combined with Elevated Park, this new greenway will be longer than two football fields and will be a great way for visitors and locals alike to experience Jonathan Creek and enjoy the mountain experience,” Woolmington said.

Woolmington said he and investorts are willing to grant the town an easement from Soco Road through the property and along the entire length of Jonathan Creek for them to design, build and maintain a “high quality walking trail and greenway.”

“If they are not willing to do this, then we will just keep the area private and available for the guests and customers of the hotel, brewery and other businesses in the project,” he said.

Woolmington said he will be asking the town to help improve the main parking lot for the new public greenway, which may include public restrooms, improved lighting and signage.

Clark said he considers the development and the greenway to be welcome additions.

“It ties wonderfully to the elevated park access point that we developed at that property,” he said of the greenway.

Clark said working with Woolmington has been a positive experience, and they have come to possess a shared vision for the property.

“As many conversations as I’ve had with Craig, he has always seen that property as one of the crown jewels of developable land in Maggie Valley,” Clark said. “He’s wanted to develop that in the best possible way.”

“This would be one of the town’s first forays into this type of public-private partnership to the level he suggested,” he added.

Mayor Mike Eveland said the board is happy to have this kind of opportunity.

“If this project goes through, it’s huge,” he said. “It means a lot for Maggie Valley because it’s new, and his vision isn’t just the hotel. The board’s excited about new construction opportunities … I think it’s great that somebody has property in Maggie Valley that has vision.”