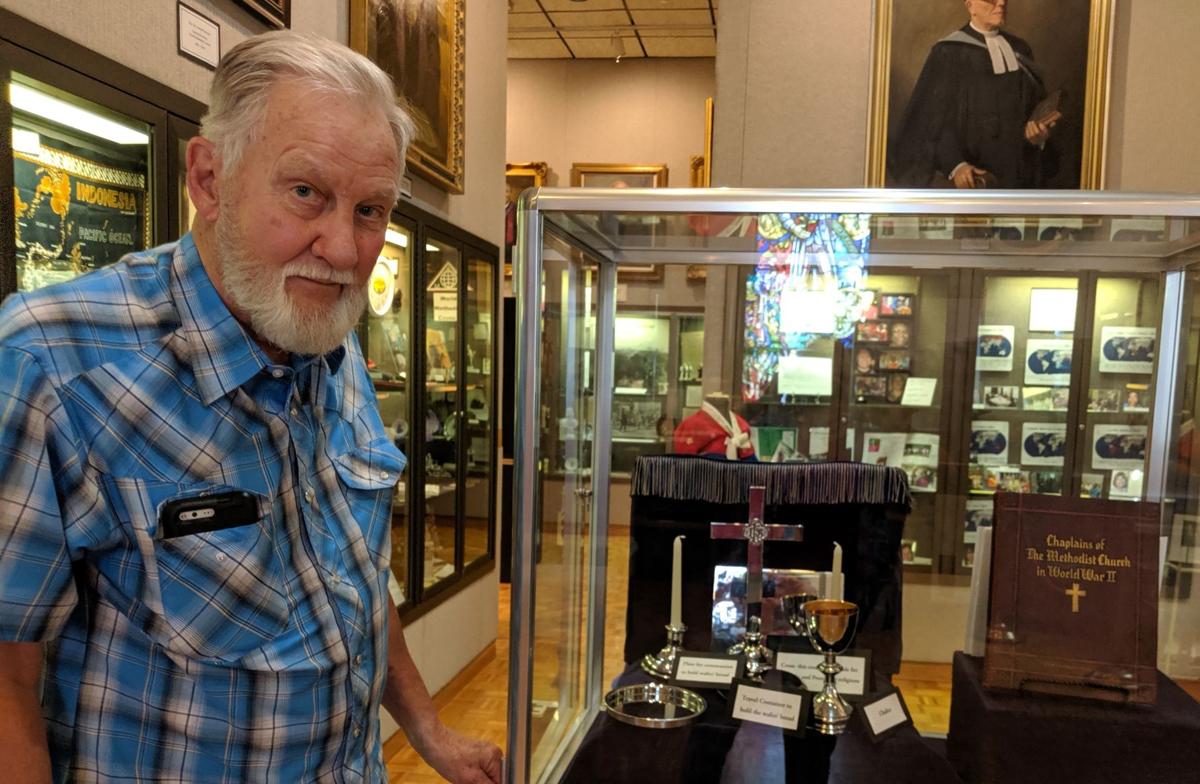 MILITARY DISPLAY — The World Methodist Museum at Lake Junaluska is putting together a special exhibit honoring military chaplains. Above, former Paratrooper Lyndon Smathers is shown with the chaplains’ display. 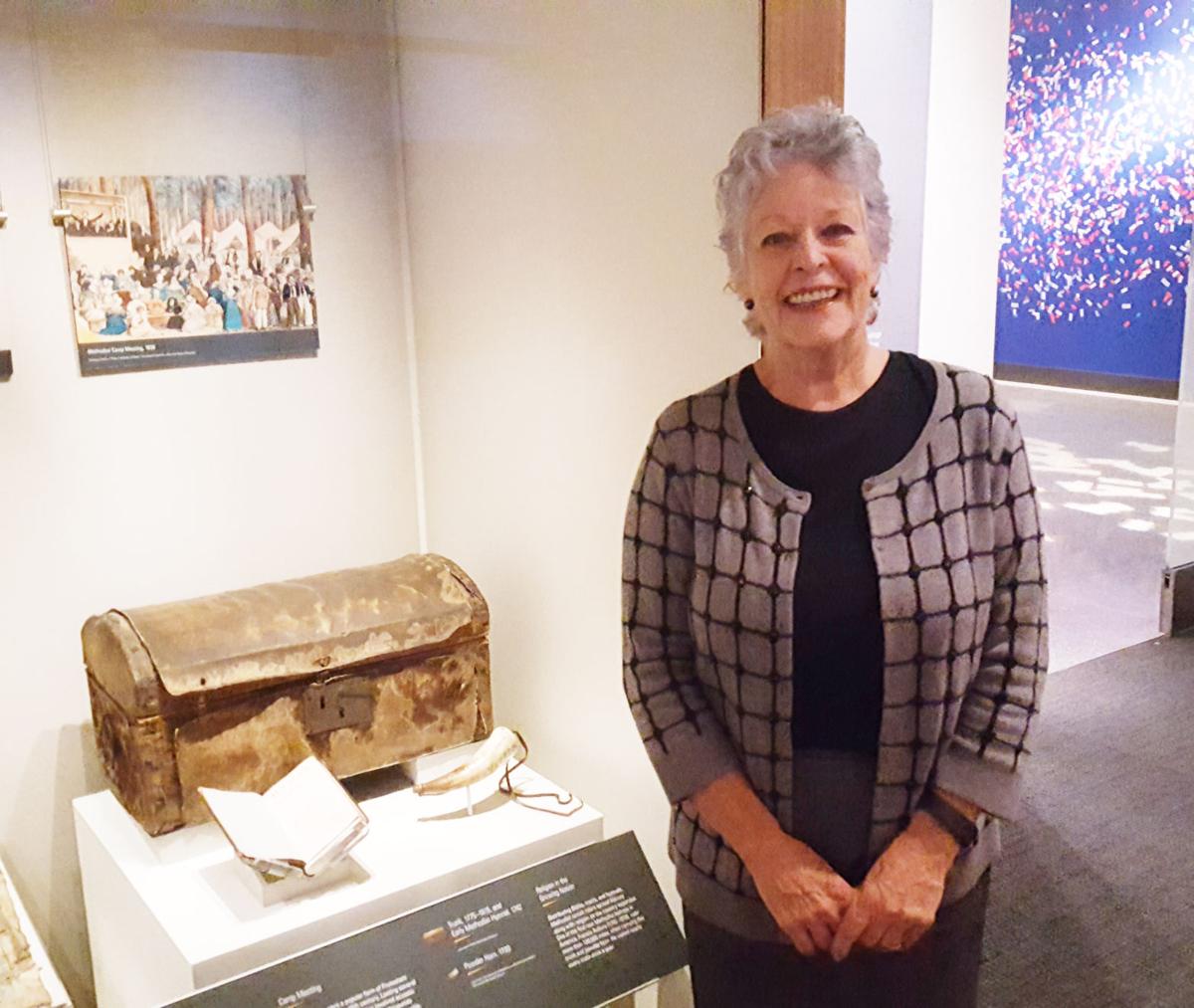 PART OF SMITHSONIAN EXHIBIT — Pictured is Jackie Bolden, World Methodist Museum Director, at the Smithsonian with the the Francis Asbury wooden trunk and a first edition hymnal written by John and Charles Wesley at the exhibition. 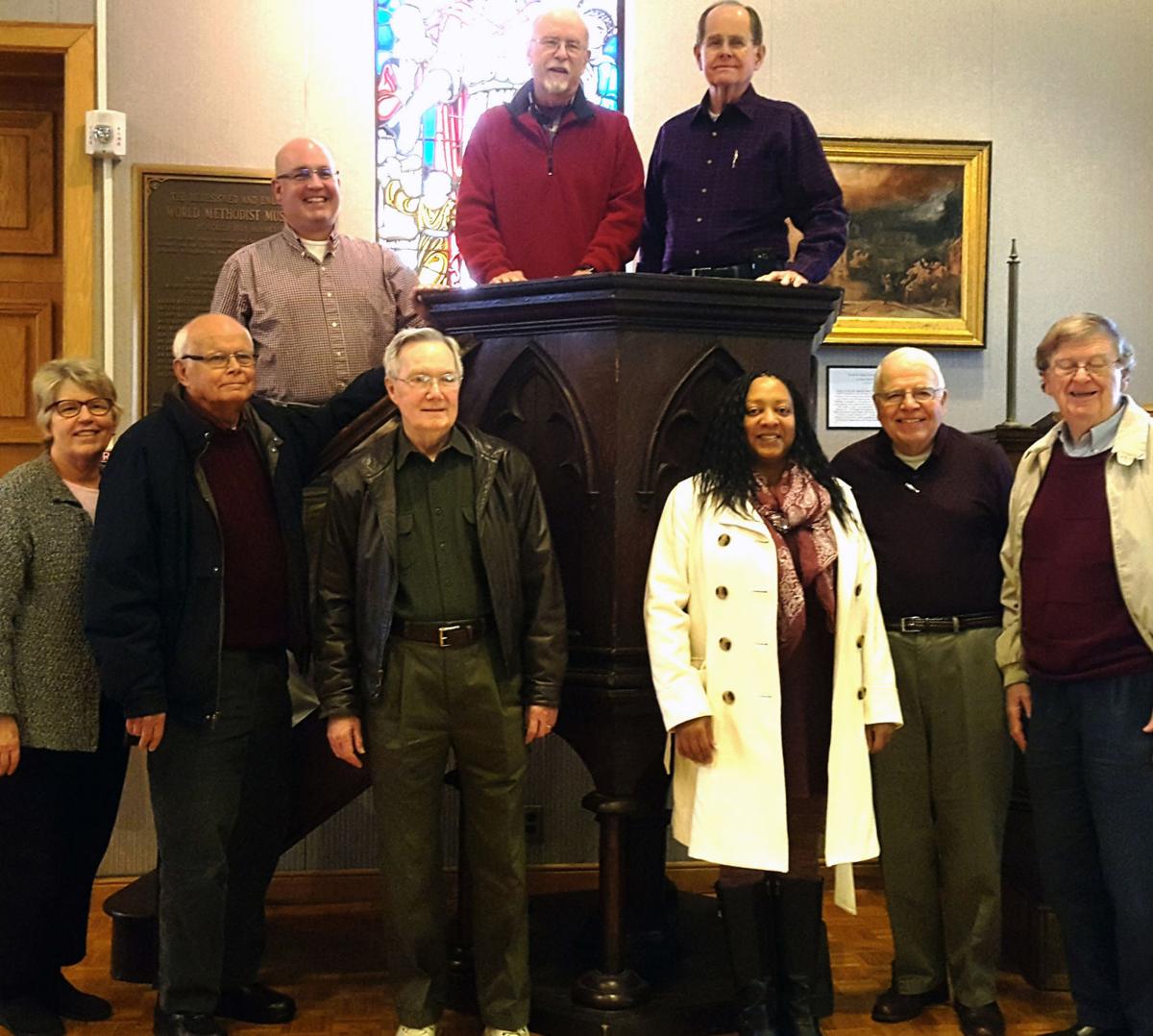 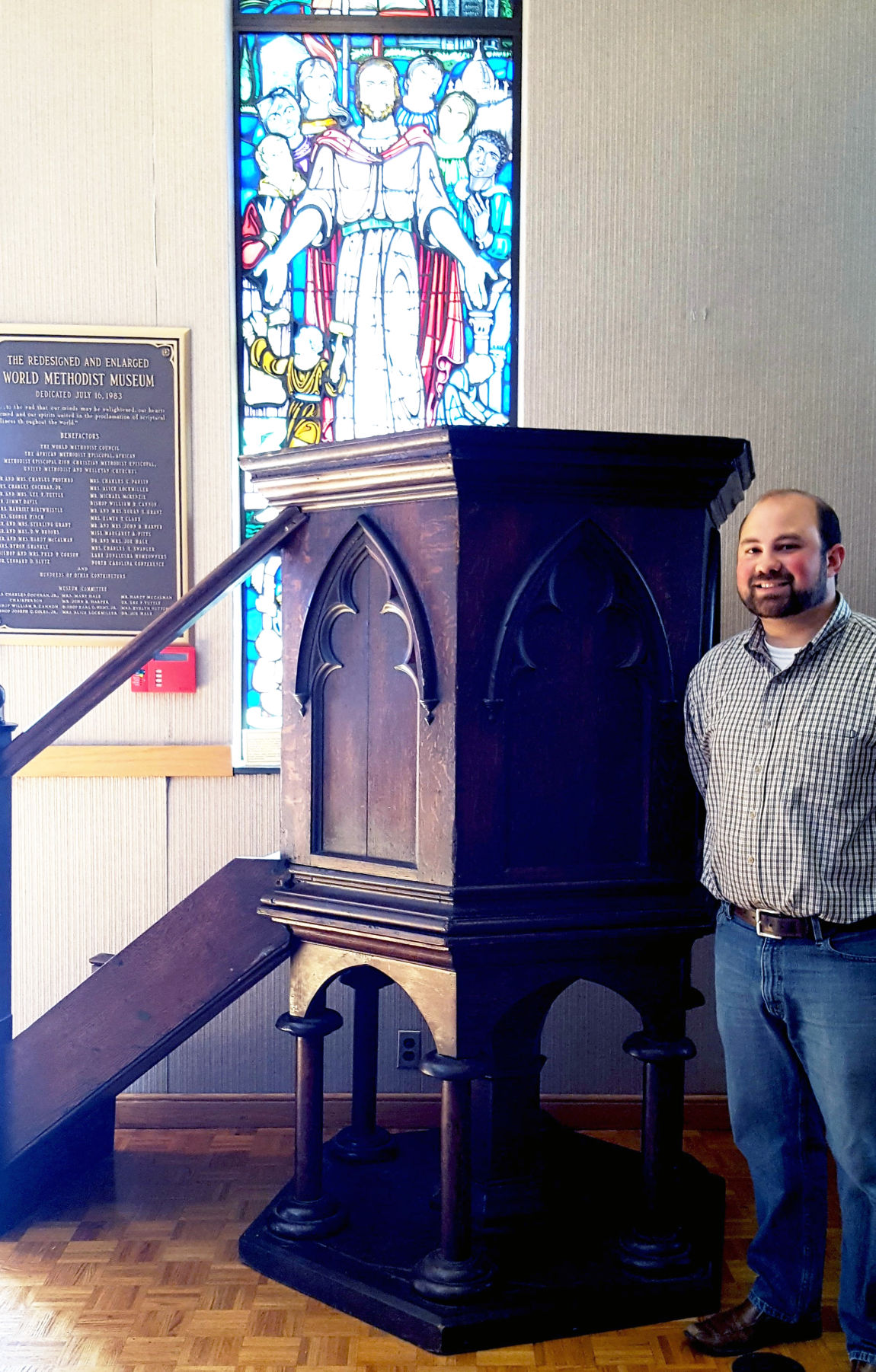 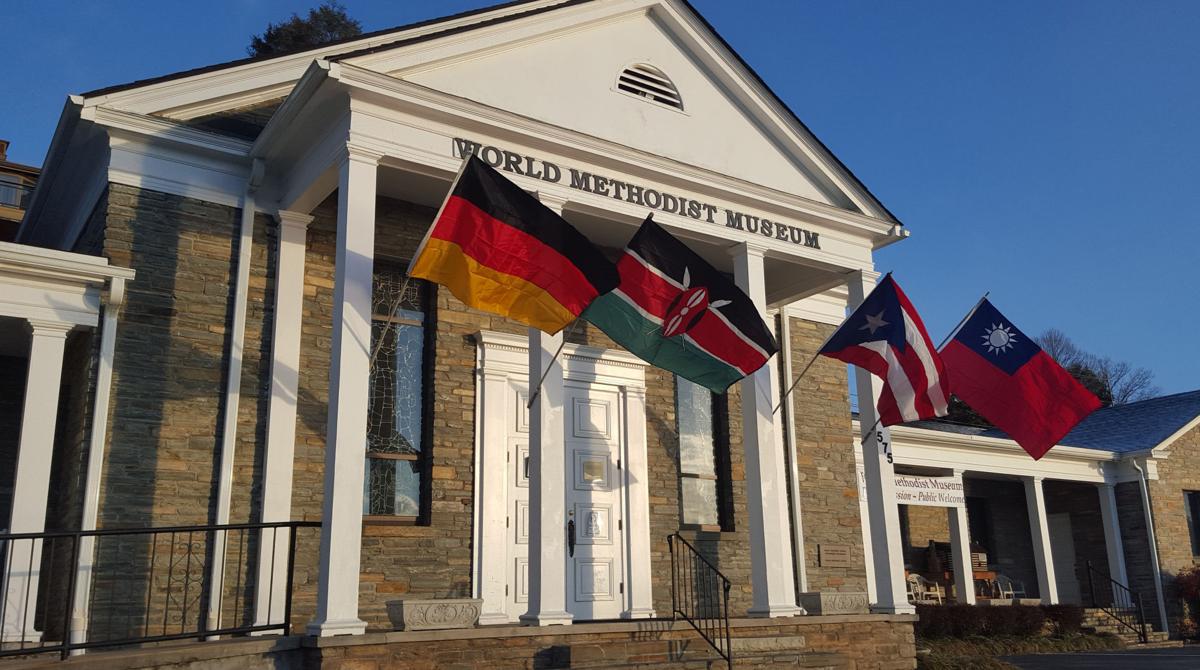 MILITARY DISPLAY — The World Methodist Museum at Lake Junaluska is putting together a special exhibit honoring military chaplains. Above, former Paratrooper Lyndon Smathers is shown with the chaplains’ display.

PART OF SMITHSONIAN EXHIBIT — Pictured is Jackie Bolden, World Methodist Museum Director, at the Smithsonian with the the Francis Asbury wooden trunk and a first edition hymnal written by John and Charles Wesley at the exhibition.

Community residents have known for a couple months now that the World Methodist Museum on the Lake Junaluska Assembly conference center grounds would be closing.

What they didn’t know until just days before Easter is that the entire collection would be sent to the Southern Methodist University library in Dallas, Texas.

In a February 2021 newsletter the World Methodist Council announced that the COVID-19 pandemic was a final blow to museum operations that have been struggling for a while.

“Despite a change in management, professional assessments, and bold initiatives to sustain the World Methodist Museum at Lake Junaluska, we are sad to announce the museum’s closure,” the newsletter stated. “According to a recent survey by the American Alliance of Museums, as COVID-19 continues to surge across the U.S., museums are losing mission dollars leaving about one-third of all institutions at risk of permanent closure.”

The newsletter promised to keep readers updated on the deaccession process.

That announcement was made April 1 when the council announced the museum contents in their entirety would be going to Bridwell Library, Perkins School of Theology and SMU Libraries at Southern Methodist University in Dallas.

“The Archival Committee carefully reviewed all the proposals that were received from institutions and individuals, and after prayerful discernment, chose Bridwell Library as it will allow the World Methodist Council Museum collection to continue,” a news release stated.

Robert J. Williams, retired General Secretary of the United Methodist Church General Commission on Archives and History, was charged with finding a new home for the museum contents.

He said he was relieved and excited that the collection will remain intact and under the care of the Bridwell Library. All who care about this collection can be confident that its future impact for faithful ministry in the Wesleyan tradition is assured.”

“We will continue to oversee and curate these items with the highest quality and standards. We are also committed to expanding public engagement in a major U.S. city like Dallas with as broad a public as possible that reflects the global nature and endeavors of the worldwide church,” Elia said.

Charlotte and Winston Rhea were excited to hear that the items they and their family had secured for the museum would soon be only 30 miles from their residence.

“My parents, Jimmy and Fleeta Davis enjoyed providing funds to the World Methodist Council under the direction of The Rev. Dr. Joe Hale for the purchase of historical items for the Wesley Museum,” said Charlotte Rhea said.

Bishop Abrahams thanked the many people who have contributed to the life, witness, and ministry of the World Methodist Council Museum at Lake Junaluska for the past 65 years.

“This is a historic undertaking that will create a larger footprint for the Council and allow many more people to utilize the collection in a new way,” Abrahams said. “It will allow the Council to become even more global as it moves into the future. We are very pleased and feel this is a great moment for Methodism. The Council is also in final negotiations with the Lake Junaluska Assembly regarding the closing of the Council’s properties there. It will allow Junaluska to enhance their educational opportunities and allow us to broaden the mission and ministries of the Council.”

Ken Howle, chief executive officer at Lake Junaluska Assembly, said the Assembly is in discussion with the World Methodist Council about the two properties they own on the grounds — the Reynolds Building which is a brick building that is a replica of the house in England where John Wesley was born and the World Methodist Building, which is where the museum has been located.

The Lake Junaluska Board of Trustees has approved the repurchase of these properties and directed staff to work on plans for preserving the buildings and the adjacent Susanna Wesley Garden as places of ongoing ministry.

“Over the past two months, members of the Lake Junaluska Board of Trustees, and I have met with the World Methodist Council’s leadership. We were sad to hear the news of their decision to close the museum and have been working to fully understand their situation and the financial implications that have brought them to this decision. From our discussion, it is clear that they have been very thoughtful in their decision, and this is the outcome of studies and meetings that began in 2013,” Howle said.

“In the 1950s, our community and Methodists from around the Southeast raised funds to build the building that housed the World Methodist Museum,” Howle said. “God has blessed both of our organizations with many years of faithful service in ministry here at Lake Junaluska. We are prayerful that we can find wisdom in our ongoing discussions and a path that assures many more years of faithful service by both organizations.”