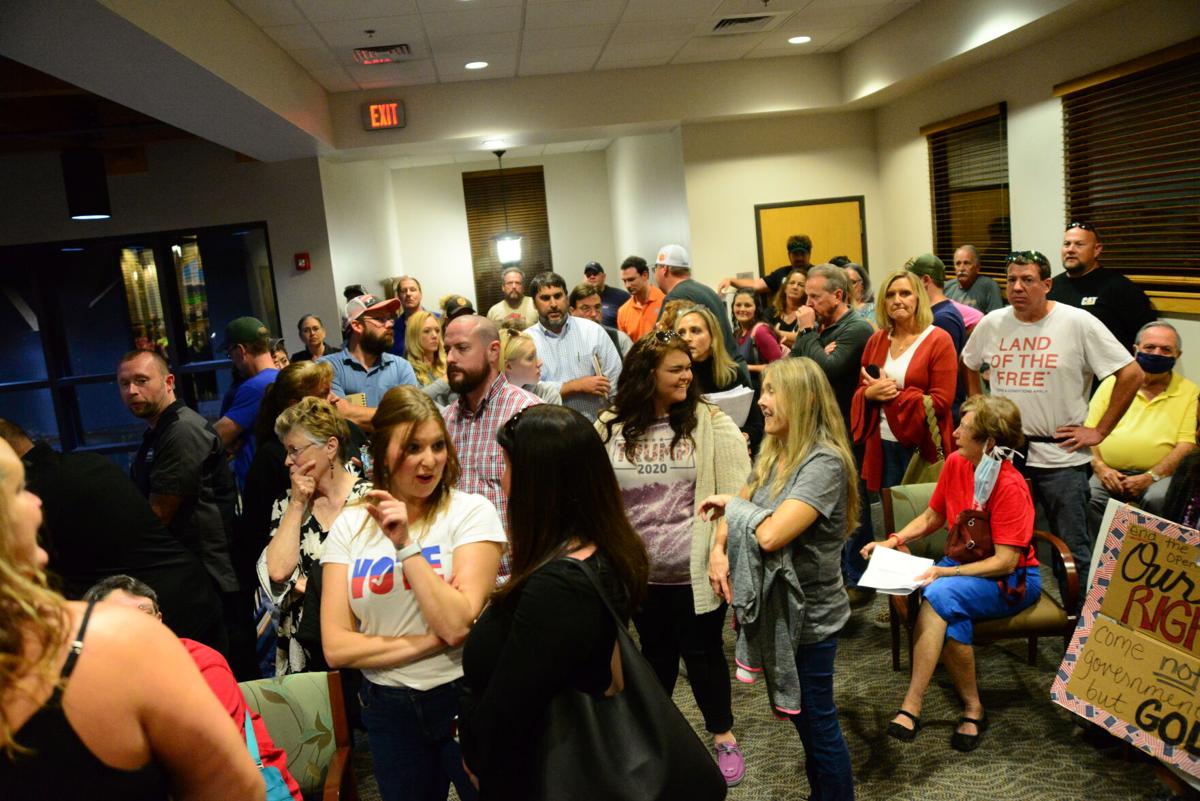 FULL HOUSE — A Waynesville town board meeting where a local mask mandate was up for discussion three weeks ago drew a full house. The crowd returned a the following meeting, and has pledged to be back again at the next one, prompting the town to consider an alternative meeting location to accommodate everyone. 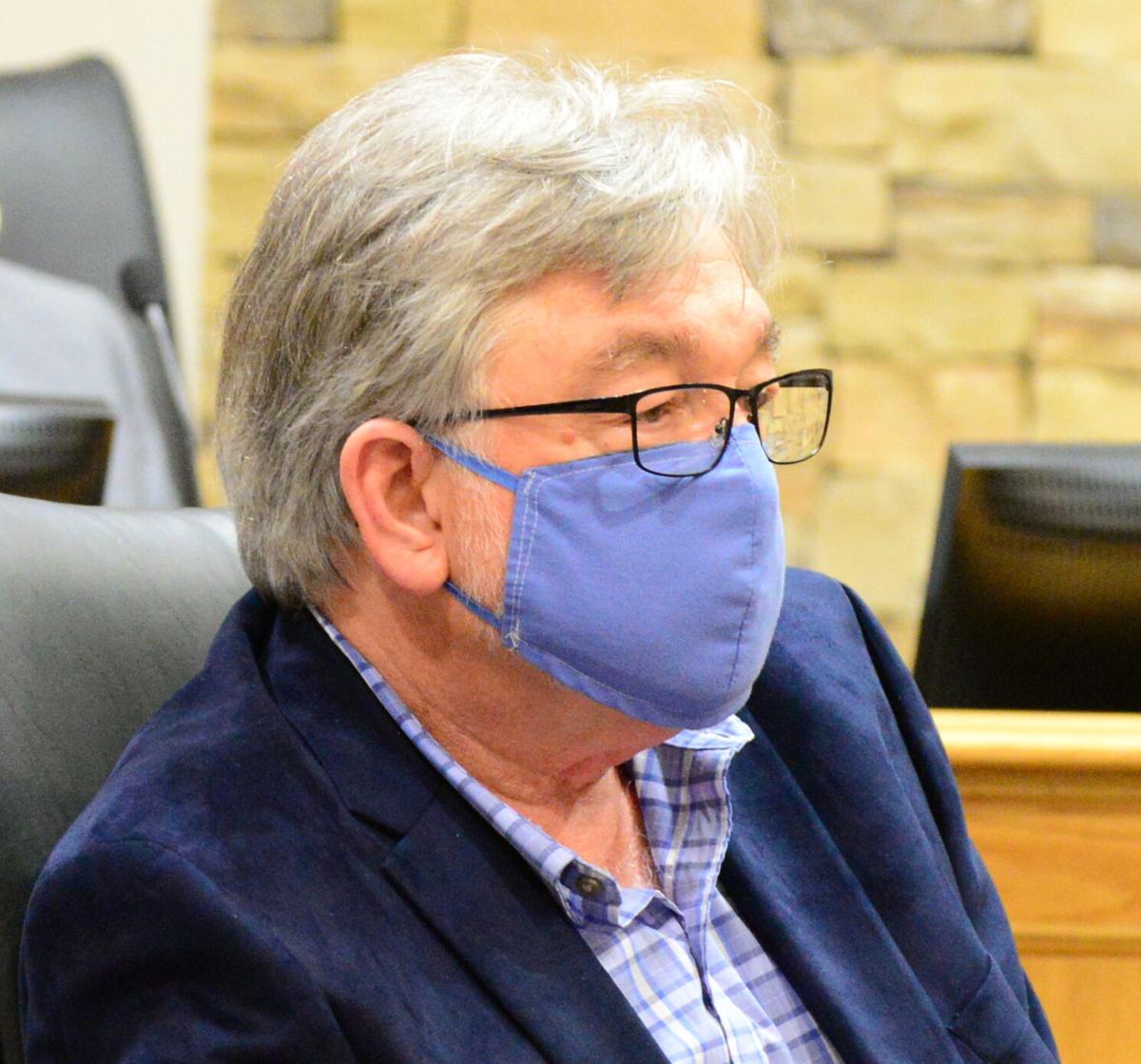 HOLDING THE LINE— Alderman Chuck Dickson, an attorney by trade, doesn’t support caving to those who refuse to wears masks to the town board meeting.

FULL HOUSE — A Waynesville town board meeting where a local mask mandate was up for discussion three weeks ago drew a full house. The crowd returned a the following meeting, and has pledged to be back again at the next one, prompting the town to consider an alternative meeting location to accommodate everyone.

HOLDING THE LINE— Alderman Chuck Dickson, an attorney by trade, doesn’t support caving to those who refuse to wears masks to the town board meeting.

Some Waynesville town board members are hoping to avoid another stand-off with anti-maskers at their next meeting after an ultimatum that audience members must wear masks didn’t go so well last time.

Things turned tense at the Waynesville town board meeting last week when several audience members refused to comply with an order to mask-up or leave the room. The town board ultimately acquiesced, referencing the fact that the rule hadn’t been announced ahead of time.

“If you had told people ahead of time that would be different, but it was out of the blue,” Mayor Gary Caldwell said.

Caldwell admitted that he and other board members were caught off guard themselves when Alderman Chuck Dickson made motion at the outset of the meeting, although the town board ended up backing it unanimously.

The large crowd who attended the last two meetings promised they would be back to the next one on Dec. 8 — potentially setting the stage for another stand-off.

Meanwhile, the town board has come under fire for not accommodating the large contingent that’s turned out at the past two meetings. Only a fraction of those trying to get into the meeting have been admitted due to limited seating.

This left dozens of members of the public sequestered in the lobby — unable to fully comprehend what was transpiring on the other side of the closed doors despite a speaker piping live audio of the meeting to the overflow crowd in the lobby.

Aldermen Jon Feichter, Anthony Sutton and Julia Freeman see a way to solve all these issues in one fell swoop: move their next meeting location down the street to the historic courthouse.

“Due to the need to practice social distancing, we’ve had to significantly limit the number of individuals that can be in the boardroom at any one time, and that makes it hard for all attendees to fully participate in the meeting,” Feichter said.

Feichter said the historic courtroom where the commissioners meet has plenty of room for everyone to fit, while still abiding by social distancing.

“I completely support moving it to a larger setting so we can accommodate more people who want to be there,” Freeman agreed.

The county has graciously offered to let the town use the courtroom for their next meeting free of charge.

“I think we should take the offer to use the courthouse so everyone can get in and be heard,” Sutton agreed.

Sutton said his concerns extend beyond the meeting room itself. Town staff end up circulating among the large overflow crowd in the lobby — most of whom weren’t wearing masks — be it police officers guarding the door or staffers circulating the clipboard with a speaker sign-up sheet.

“I think we are putting them in a very uncomfortable position and should do everything we can to alleviate the stresses on our staff,” Sutton said.

The roomy historic courtroom has another advantage, as well. When county commissioners were faced with a contingent of the public refusing to wear masks at its own meeting earlier this week, they designated a section of the courtroom as segregated seating for the non-mask wearers.

The small quarters in the Waynesville board room even pose a problem for aldermen seated at the front. Aldermen can’t sit in a single row behind the dias like they used to, and instead must spread out, meaning some are seated at a long table at floor level. This puts them within spitting distance of the podium where members of the public take turns speaking.

To move or not to move?

Alderman Chuck Dickson isn’t so sure that accommodating the non-mask wearers is the right thing to do.

“The solution is for them to wear masks. I don’t think the solution is for us to move meeting places. We shouldn’t be forced out of our home because people don’t want to comply with health and safety rules,” Dickson said.

Dickson said simply segregating the anti-maskers into a confined area would be aiding and abetting a wanton disregard for the statewide mask mandate.

“Putting them together in a special section by themselves, I’m not sure that’s a good idea,” Dickson said. “It still puts everyone else at risk.”

Dickson said he is normally all for compromise, but it’s a different story when it comes down to a matter of life or death.

Those who refused to put on masks at the last meeting aren’t likely to change their position, however.

Attendees could put on a mask to walk through the doors, and remove it once they sat down, putting police officers in the awkward position of having to physically remove them.

And even if the anti-maskers are held at bay in the lobby, it still doesn’t solve the issue of town staff having to interact with them when circulating the sign-up sheet and fetching speakers when their turn rolls around.

Dickson said perhaps they shouldn’t even be allowed inside the building without a mask, and instead be made to stay outside on the sidewalk. That still doesn’t solve the issue of those who wear a mask to get in and then take it off.

If there’s no way to enforce mask wearing, however, Dickson suggested taking the meetings virtual as a last resort, particularly given rising case counts.

“It may be that we need to go back to having Zoom meetings in order to protect the public and the safety of our employees,” Dickson said.

This would likely be perceived as quashing public comment altogether, though Dickson said the public could just send written comments.

While the next town board meeting isn’t until Dec. 8, it will have to decide whether to move its meeting venue at least seven days in advance, per state open meeting laws.

Meanwhile, it’s unclear whether the motion at the last meeting to ban those without masks would applied to that meeting only, or all future meetings — even if it was moved to the courthouse.

By Dickson’s reckoning, his motion that passed unanimously is still in effect and would apply at the next meeting, regardless of where it’s held. While the town board relented last time on the grounds that the requirement hadn’t been made known ahead of time, that won’t be the case this time, he said.

“We will have posted it and they will know what the rule is,” Dickson said.

However, the language of the motion didn’t actually specify whether it applied to that night’s meeting, or all future meetings.

“We would need clarification from the board,” Assistant Town Manager Jesse Fowler said.

Waynesville has a standing policy of limiting the public comment period to only 30 minutes, resulting in several speakers being cut off before they've had a turn at the podium. Some Waynesville aldermen have proposed eliminating the time cap for public comment at its next meeting. Stay tuned to The Mountaineer for more on this development.

Maybe Dr Mark Jaben could appear at the meeting and discuss why wearing masks are indeed necessary!!