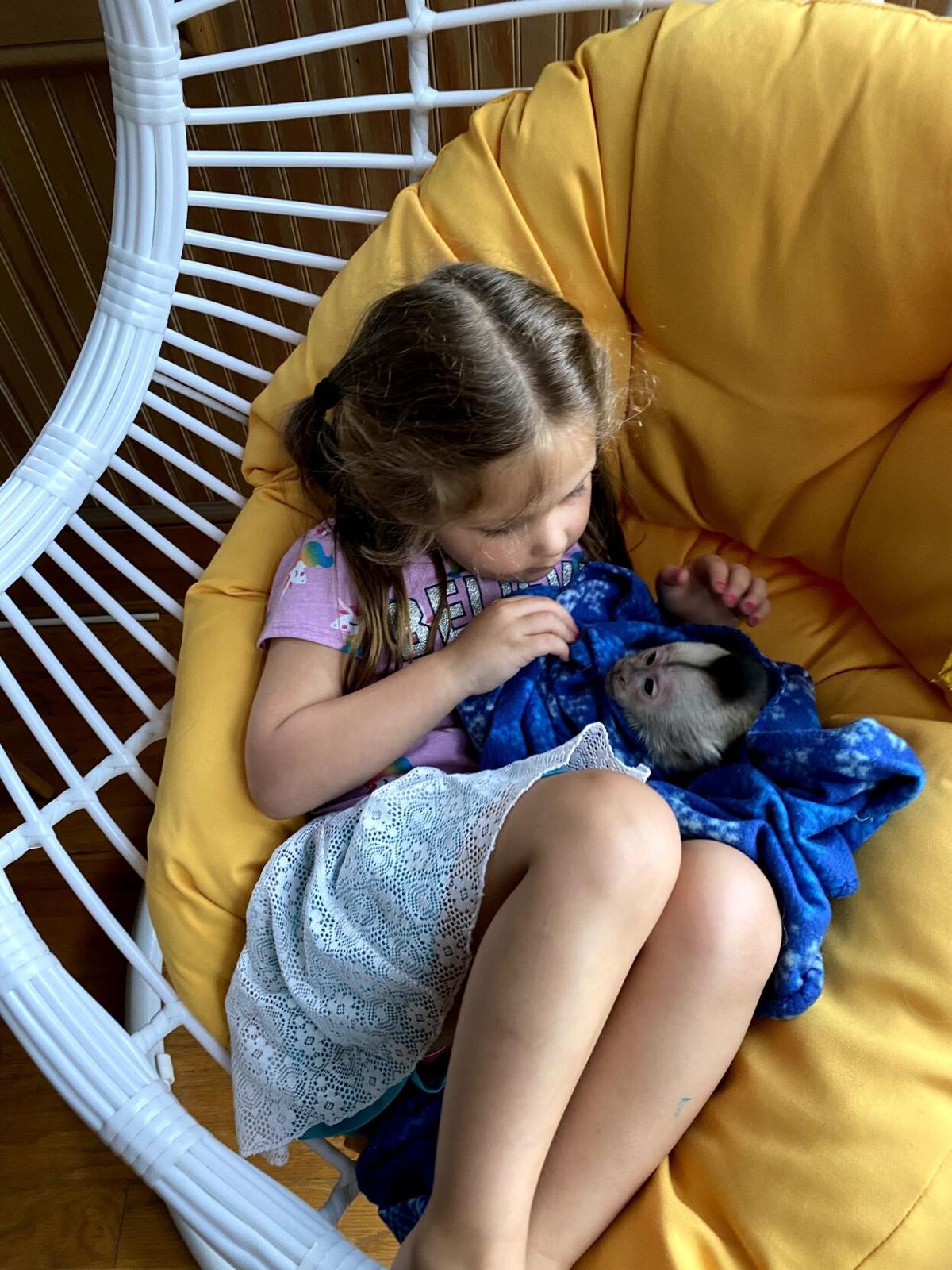 Beloved pet — Cynthia Gregory said Boomer-Ray the capuchin monkey was a part of her family, dearly beloved by her son, daughter (pictured here) and pet dogs. 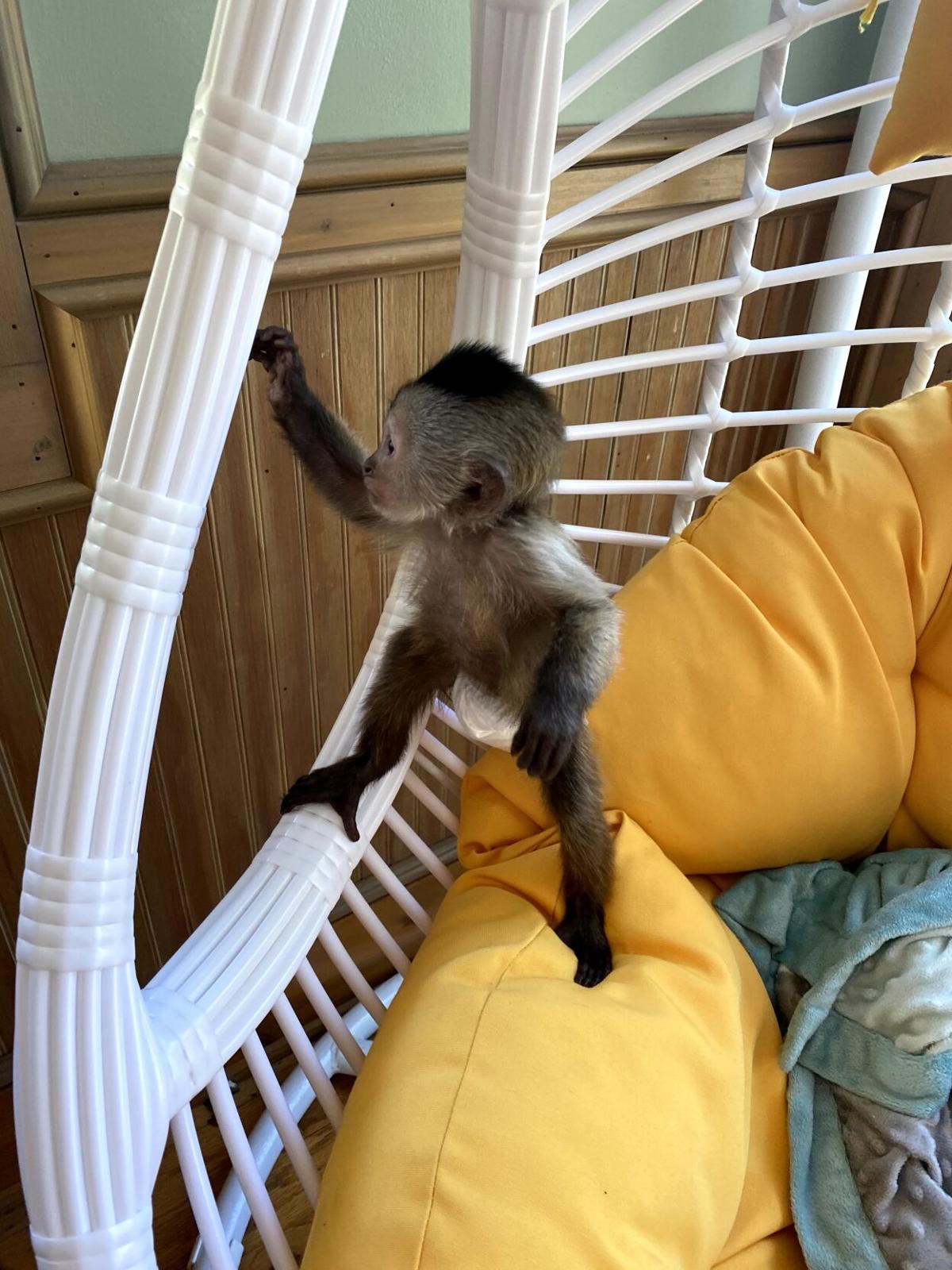 Monkeying around — Capuchin monkeys like Boomer-Ray, pictured here, grow to be no more than a foot tall and weigh less than 10 pounds, but are considered inherently dangerous animals in Haywood County. 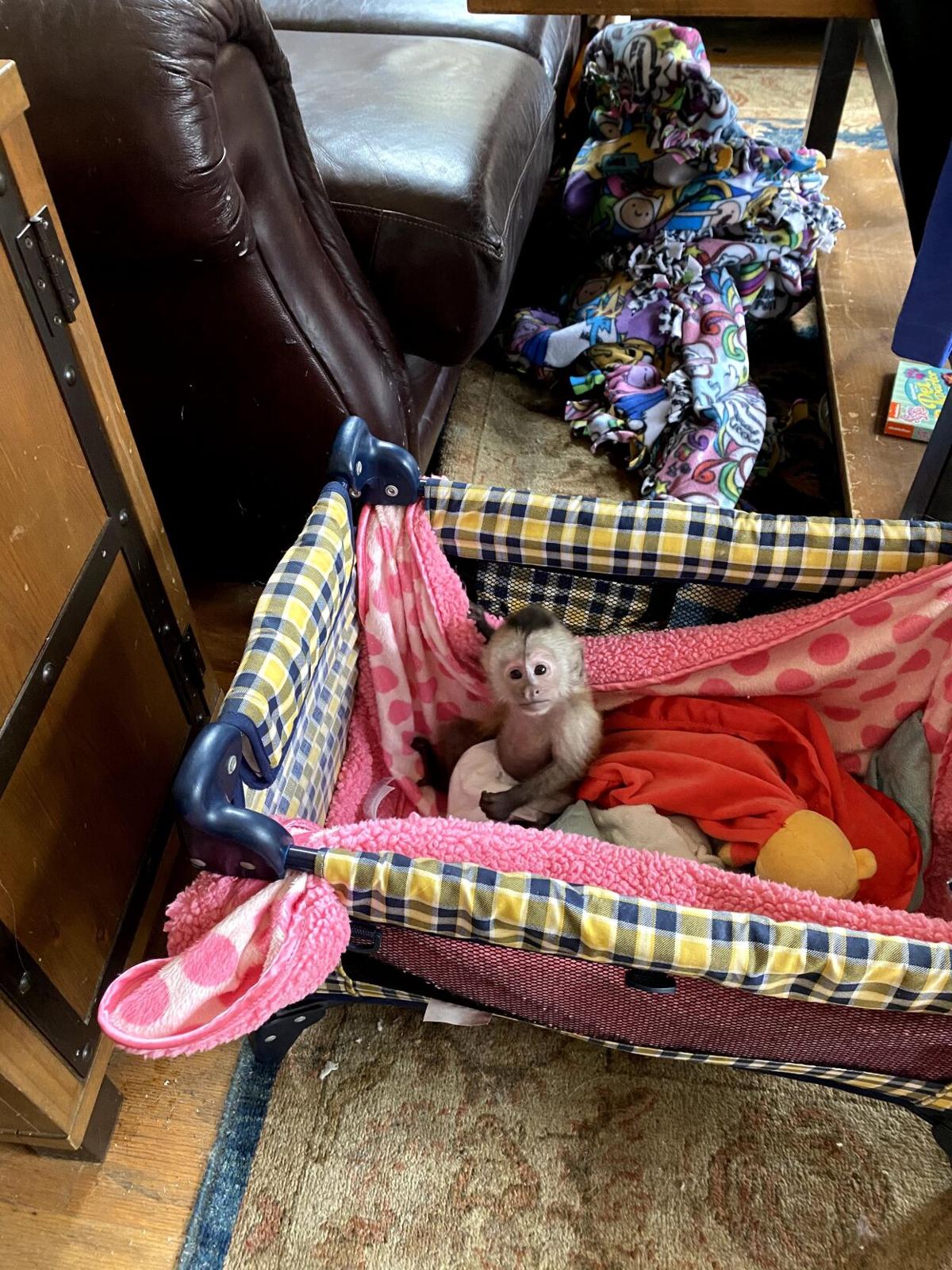 BABY BOOMER — Boomer-Ray the miniature, mild-mannered capuchin monkey had been with his family to restaurants, slept in a little playpen (pictured here), wore a tiny diaper and was anything but dangerous when he was confiscated as an illegal pet in Haywood County.

Beloved pet — Cynthia Gregory said Boomer-Ray the capuchin monkey was a part of her family, dearly beloved by her son, daughter (pictured here) and pet dogs.

Monkeying around — Capuchin monkeys like Boomer-Ray, pictured here, grow to be no more than a foot tall and weigh less than 10 pounds, but are considered inherently dangerous animals in Haywood County.

BABY BOOMER — Boomer-Ray the miniature, mild-mannered capuchin monkey had been with his family to restaurants, slept in a little playpen (pictured here), wore a tiny diaper and was anything but dangerous when he was confiscated as an illegal pet in Haywood County.

Because the Haywood County Board of Commissioners decided not to vote on changing its inherently dangerous animals ordinance, Boomer-Ray the illegal capuchin monkey remains in custody of animal control, with an uncertain fate.

“The fact is he’s not dangerous, and he can be proven not dangerous, so what are we doing?” said Cynthia Gregory, whose monkey was confiscated by animal services on May 4. “The county commissioners, they don’t understand some things.”

Following a June 15 public hearing regarding Haywood County’s inherently dangerous animals ordinance, the county board of commissioners did not vote on July 20 to amend the law so it would exclude capuchin monkeys, which grow to be no more than a foot tall and weigh less than 10 pounds.

“The monkey did not know he was a monkey, we didn’t tell him yet,” Gregory said outside the historic courthouse after the commissioners’ July 20 meeting. “He had never been in a cage in his life, and you know that they have him caged.”

Gregory said Boomer-Ray was a part of her family, dearly beloved by her son, daughter and pet dogs.

“My daughter just turned 5. She planned to have a beautiful birthday party with her monkey,” Gregory said. “Her morning routine for a solid six months was getting up, getting her monkey and going to their little chair to eat breakfast.”

The miniature, mild-mannered monkey had been with the family to restaurants, slept in a little playpen, wore a tiny diaper and was anything but dangerous, Gregory said.

“It’s not that they’re taking him from me,” Gregory said. “I pride myself in my children smiling, that’s what makes me go.”

To regain possession of Boomer-Ray, Gregory said she has offered to meet with animal control at the Haywood-Jackson county line and move the monkey to her house in Sylva, but county officials have yet to agree to any such terms.

Boomer-Ray was one board of commissioners vote away from becoming a legal pet in Haywood County on July 20, but none of the other four commissioners seconded Commissioner Mark Pless’ motion to vote on changing the dangerous animals ordinance, so the law remains as written.

Haywood County Animal Services Director Howard Martin said the monkey is safe in custody of his department, being cared for by someone licensed by the USDA to work with primates.

“It’s not for me to determine what happens to it,” Martin said. “I’m sure that will be decided through our county attorney and through the legal representation of the petitioner.”

The monkey, two dogs and a small constrictor snake which is also illegal in Haywood County were all confiscated from Gregory’s home by animal control, as requested by Haywood County Sheriff’s Office, while deputies were executing a search warrant related to a crime that Gregory said neither she nor her children were involved in.

“I understand they’re going to say because the monkey and the snake they got was illegal, but why did they take those dogs out of my house?” Gregory said. “There was two other little dogs, they didn’t take them though. They should have never took neither of those dogs.”

Martin said animal control is often called on by law enforcement to remove animals from a situation, and this scenario was not much different, except for the two creatures that are against county ordinances.

“We did what we do every day,” Martin said. “We impounded four animals that were inside a house at the request of the Sheriff’s office.”

Martin said Gregory and her son arrived at his office the same day the animals were impounded, but only claimed to recognize one of the dogs.

“We were under the impression that all the animals belonged to them,” Martin said. “The two dogs were presented to them, and they stated to us that one dog was theirs. The other one, they didn’t know who it belonged to.”

Gregory said she would explore further options for litigation with her attorney, George Hyler, but until a resolution is found, the monkey named Boomer-Ray will remain impounded as contraband.

“I’m just trying to keep consistent with what the ordinances are here in Haywood County,” Martin said. “The monkey is safe where I have it, it always has been.”

Gregory said she is federally licensed to own and travel with the monkey, and that other residents of Haywood County also possess pet monkeys without repercussion.

“This monkey situation is terrible,” Gregory said. “He’s not dangerous, and they all know it. He’s just friendly.”

Arguments for and against keeping capuchin monkeys as pets were heard by the county commissioners on June 15. The board’s next step is to deci…