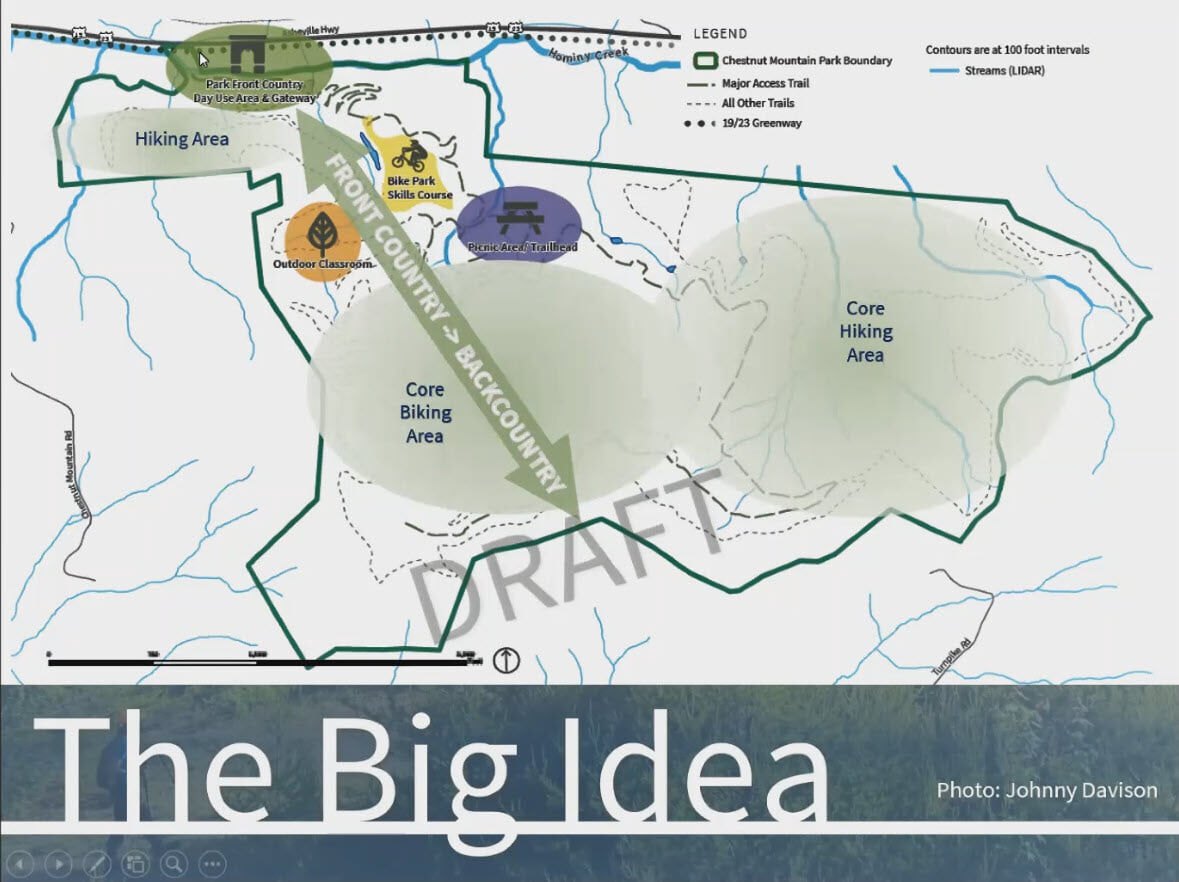 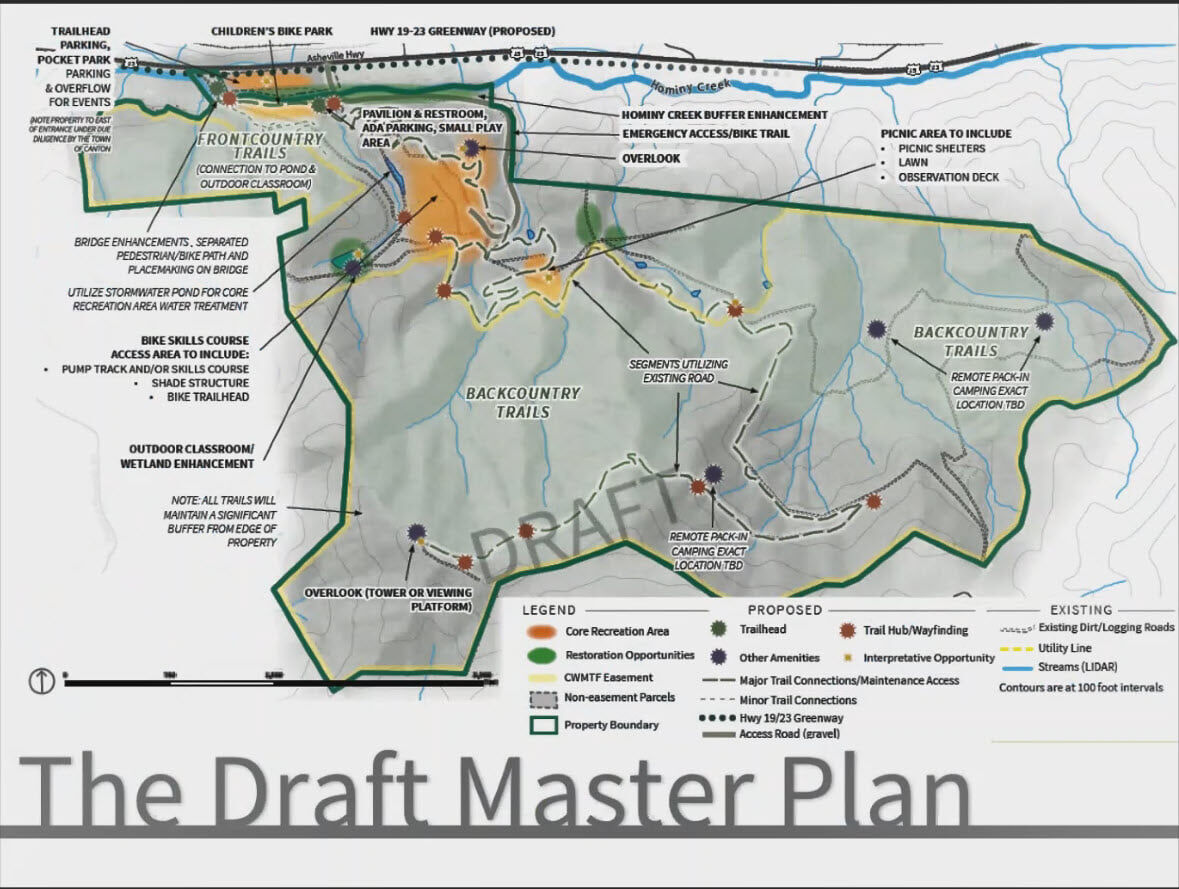 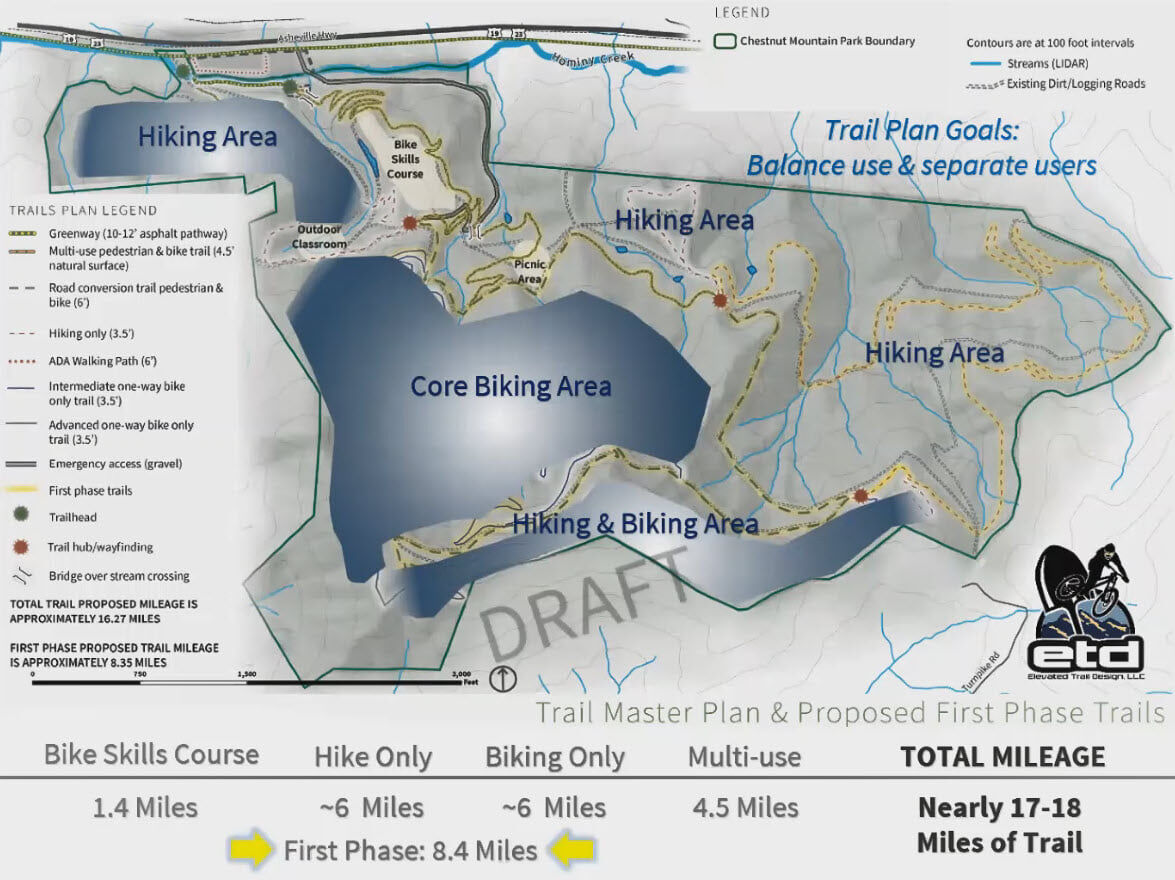 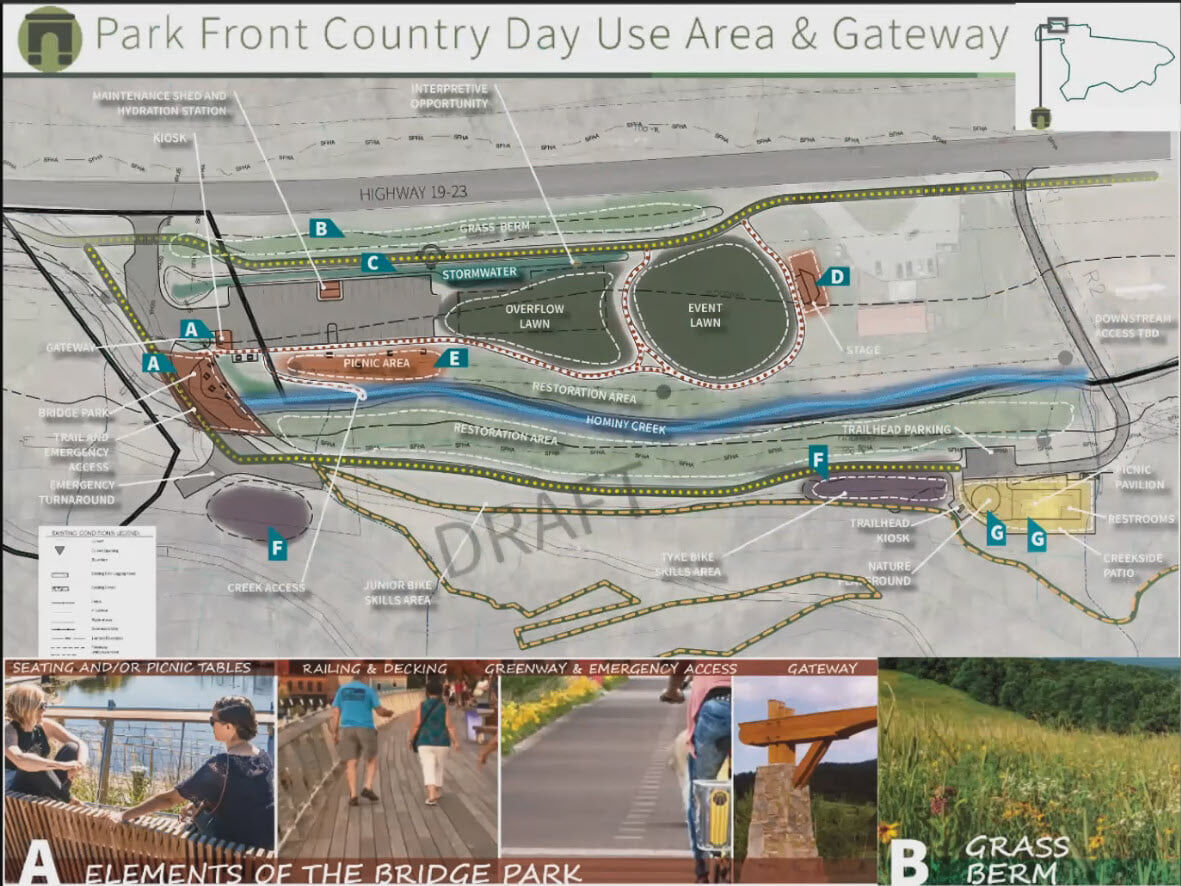 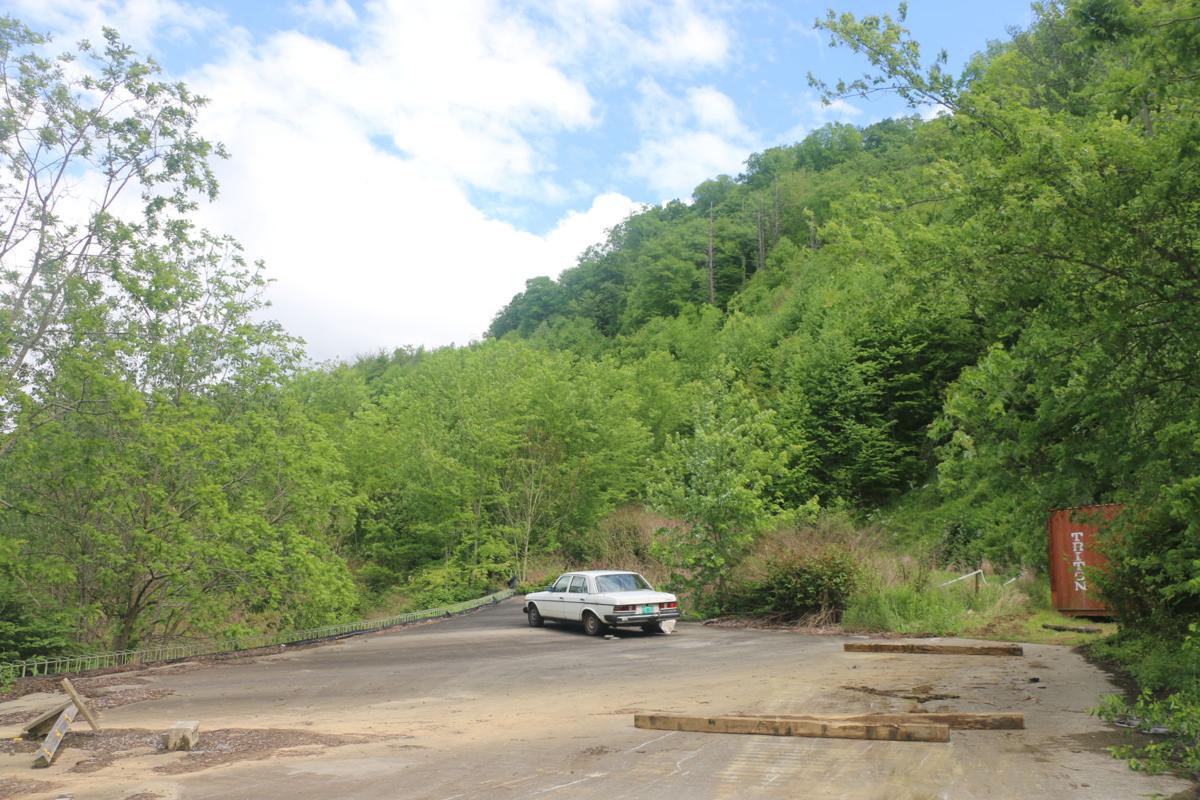 BLANK SLATE — At Chestnut Mountain, there is little sign of prior plans to develop the land into an 8,300-seat grandstand speedway, other than the skeleton of a concrete bridge over Hominy Creek. 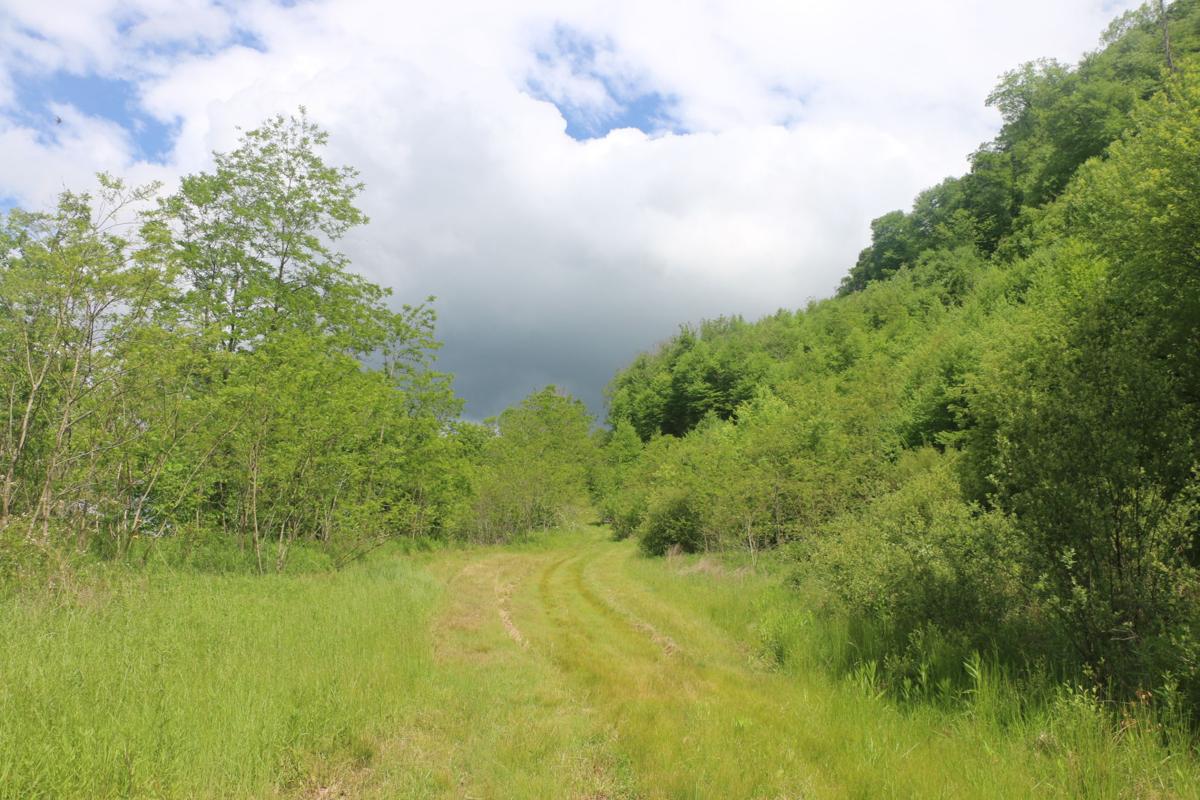 CHESTNUT MOUNTAIN — Southern Appalachian Highlands Conservancy will soon close on the purchase of a 450-acre forested tract on Chestnut Mountain, and plans to deed it to the Town of Canton for recreational use. 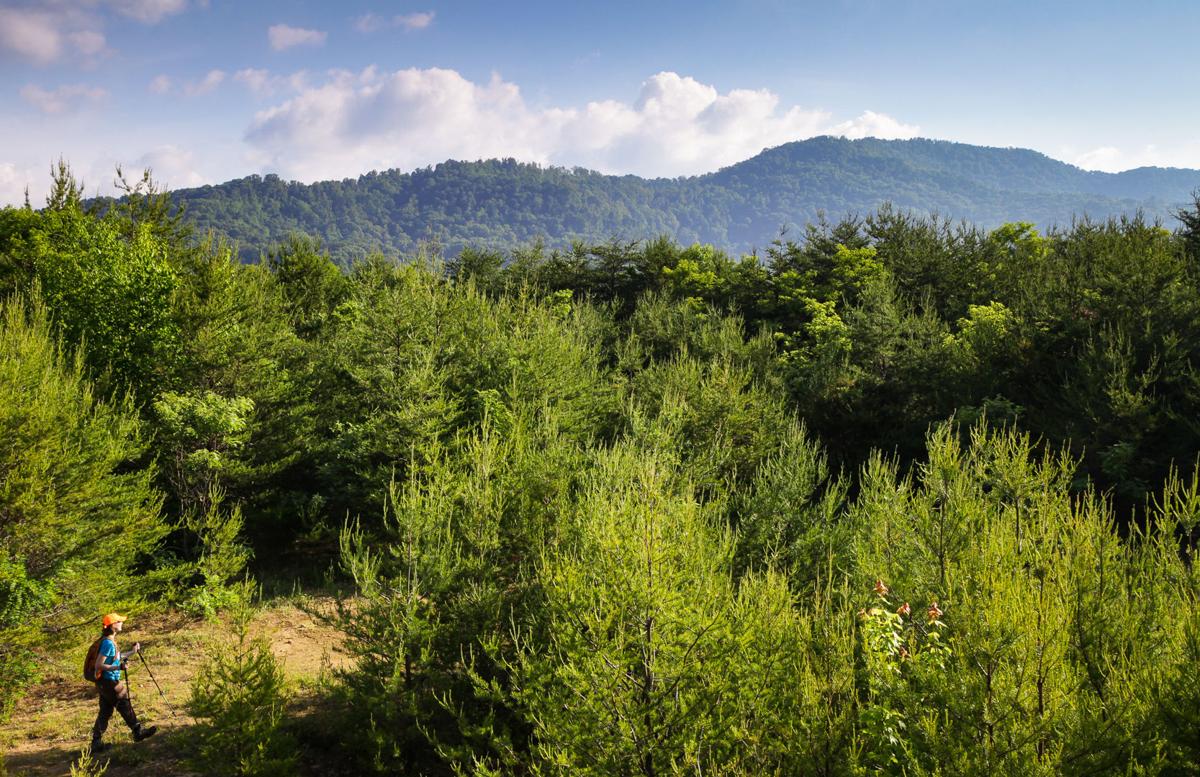 Canton Motorsports / Chestnut Mountain LUSH WOODLAND — SAHC Conservation Director and Haywood County native Hanni Muerdter visits the Chestnut Mountain property, which SAHC hopes to purchase and donate to the Town of Canton for the creation of a public park.

BLANK SLATE — At Chestnut Mountain, there is little sign of prior plans to develop the land into an 8,300-seat grandstand speedway, other than the skeleton of a concrete bridge over Hominy Creek.

CHESTNUT MOUNTAIN — Southern Appalachian Highlands Conservancy will soon close on the purchase of a 450-acre forested tract on Chestnut Mountain, and plans to deed it to the Town of Canton for recreational use.

Canton Motorsports / Chestnut Mountain LUSH WOODLAND — SAHC Conservation Director and Haywood County native Hanni Muerdter visits the Chestnut Mountain property, which SAHC hopes to purchase and donate to the Town of Canton for the creation of a public park.

CANTON — Draft concepts for turning the 450-acre Chestnut Mountain Park outside Canton into an outdoor recreation park were revealed during an online forum July 29.

The property, located east of Canton off U.S. 19-23, was recently protected by the Southern Appalachian Highlands Conservancy and will eventually be turned over to the Town of Canton to manage.

A poll that ran earlier in the summer saw more than 4,000 participants, helping to form the preliminary concepts for Chestnut Mountain Park’s future.

Draft plans call for 16 to 18 miles of hiking and biking trails, picnic areas, an outdoor classroom space, open lawns in the front-country and forested backcountry with primitive camping amenities.

Town of Canton Assistant Manager Nick Scheuer said the park will not only be a hub for recreation, but will also strengthen the local economy.

“It’s our hope that by building a multi-use park that draws people in from our town, county and region, as well as the state and beyond that, those kinds of forces will attract outfitters and bike shops, and things that go hand-in-hand with a big multi-use park,” Scheuer said.

During the online forum this week, Kim Williams of Equinox Environmental, an Asheville-based consulting firm helping to create the master plan for the property, walked through how different types of recreation could be accommodated.

Some trails will be for mountain bikers only, including a potential bike skills course and a downhill, gravity-powered trail, while other segments will be exclusively for foot traffic.

“Certain trails will be dedicated hiking trails only,” Williams said. “There’ll be a summit trail to take you close to the top.”

Other trails would be shared by both hikers and mountain bikers. But a trail direction would be specified for bikers to eliminate potential conflicts.

“Those trails that will be shared, mountain bikers will be going uphill at lower speeds,” Williams said.

A front-country section will be developed on the portions of property that were altered in preparation for what would have been a motorsport grandstand racetrack, planned in the early 2000s.

“A lot of the site towards the road was beginning to be developed for the speedway and had already been impacted,” Williams said. “As you get further from the road, you get more conservation value.”

About 4.5 miles of trail will be ADA-accessible greenway, with funding and construction from N.C. DOT during its future U.S. 19-23 modernization work, Williams said.

With so much to do, planners are relying on results from a pair of polls, available on www.menti.com, to help decide what gets built first. Public comment is being sought through Aug. 3.

“We’re not going to be able to build everything for our budget,” Williams said. “Phasing is going to likely happen starting in 2021.”

Breaking the construction of different park amenities into phases will get the park open to the public faster, and help leverage grant funding for expansion.

“The town doesn’t actually have to provide a ton of taxpayer dollars or come up with a big cash match,” Williams said, listing several grant sources that can keep town expenses to a minimum.

Recreation access for trails might be available as early as the middle of next year, with 2021 and 2022 as targets to start building other park features if grants are accepted, Williams said.

Outdoor recreation in North Carolina generates $28 billion annually, and 843,000 mountain bikers visit the nearby Pisgah-Nantahala National Forest each year, according to figures provided by Williams.

Scheuer said a memorandum of understanding is already being worked out between the town and a volunteer nonprofit called Pisgah Area SORBA (Southern Off-Road Bicycle Association) to handle trail maintenance.

Other partnerships with individuals and organizations will aid in the park’s success, Scheuer said.

“We’ll be looking to partner with everyone that we possibly can,” Scheuer said. “We welcome any partnerships possible, it’s a big dream and a big project, and we need all the help we can get.”

To get involved, Scheuer said to send an email to chestnutmountainpark@cantonnc.com.

The Town of Canton is seeking input on draft plans for Chestnut Mountain Park.

To answer poll questions about the park project's amenities, go to www.menti.com and enter the code 83 38 99.

To provide general comments, go to www.menti.com and enter the code 90 29 12.