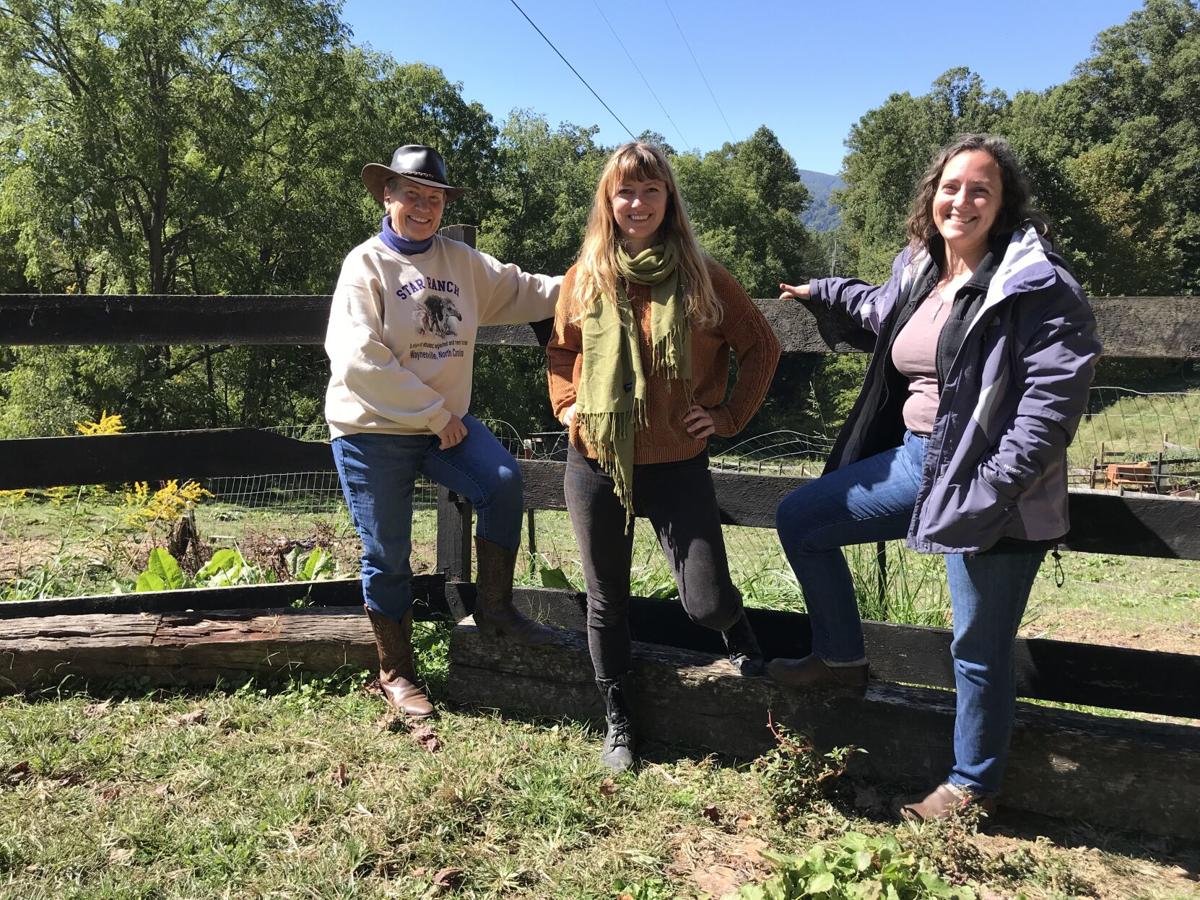 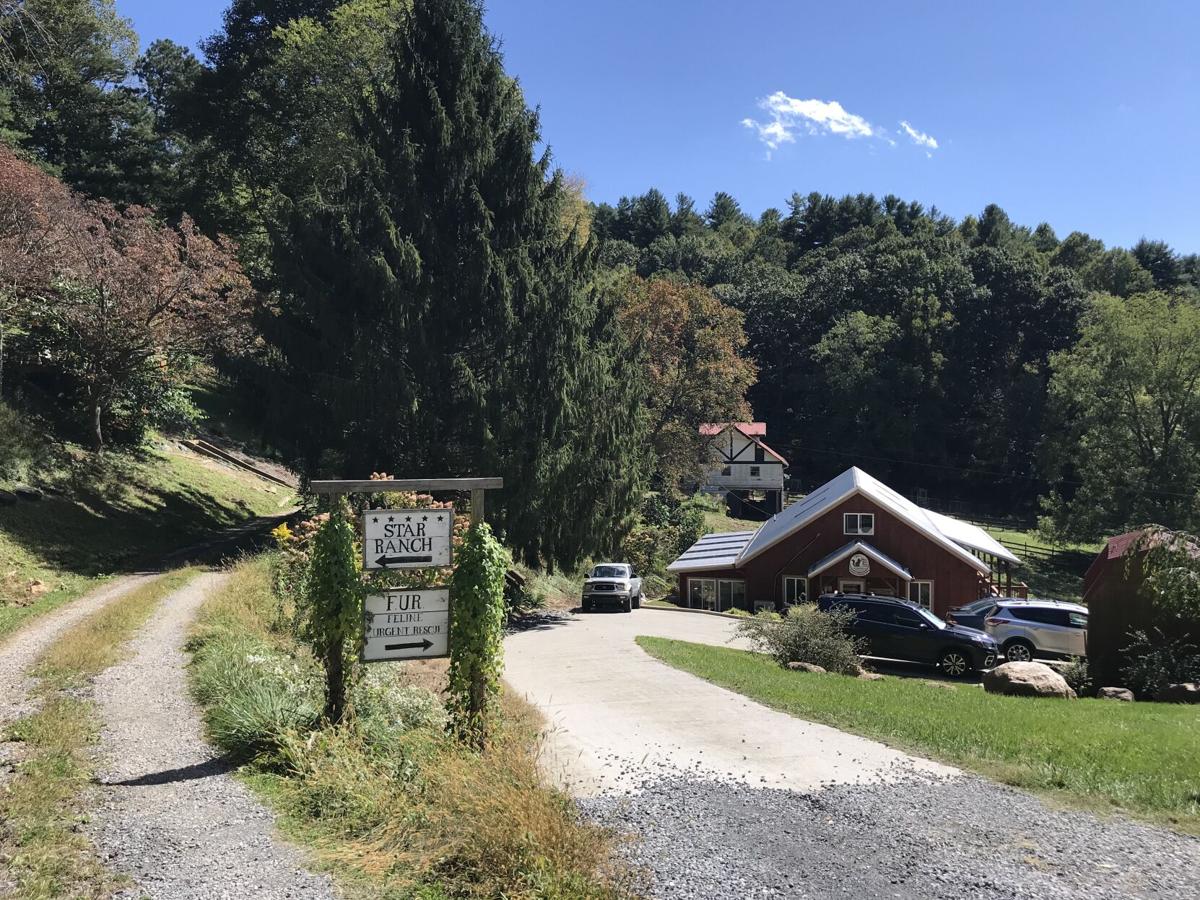 THREE WAYS TO HELP — The red cottage in the foreground is the home of Feline Urgent Rescue (FUR), while Farmshire’s barn is visible in the background. Directly across from Farmshire, behind the trees, is STAR horse rescue. 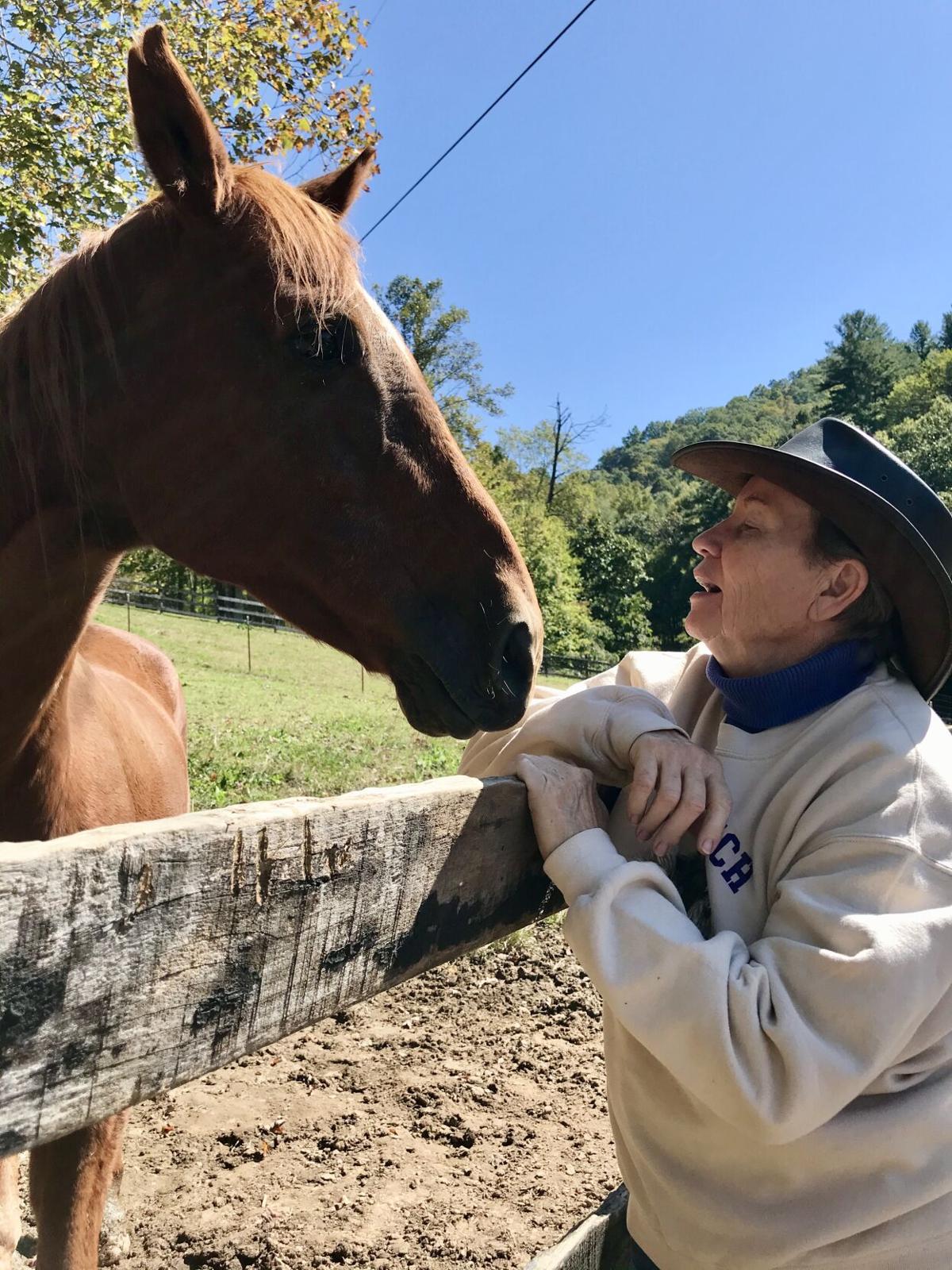 {p class=”p1”}HAPPY HORSE — Karen Owens shows off one of her success stories, Baby, who has come a long way on the road to recovery from when she first arrived at STAR ranch.{/p} 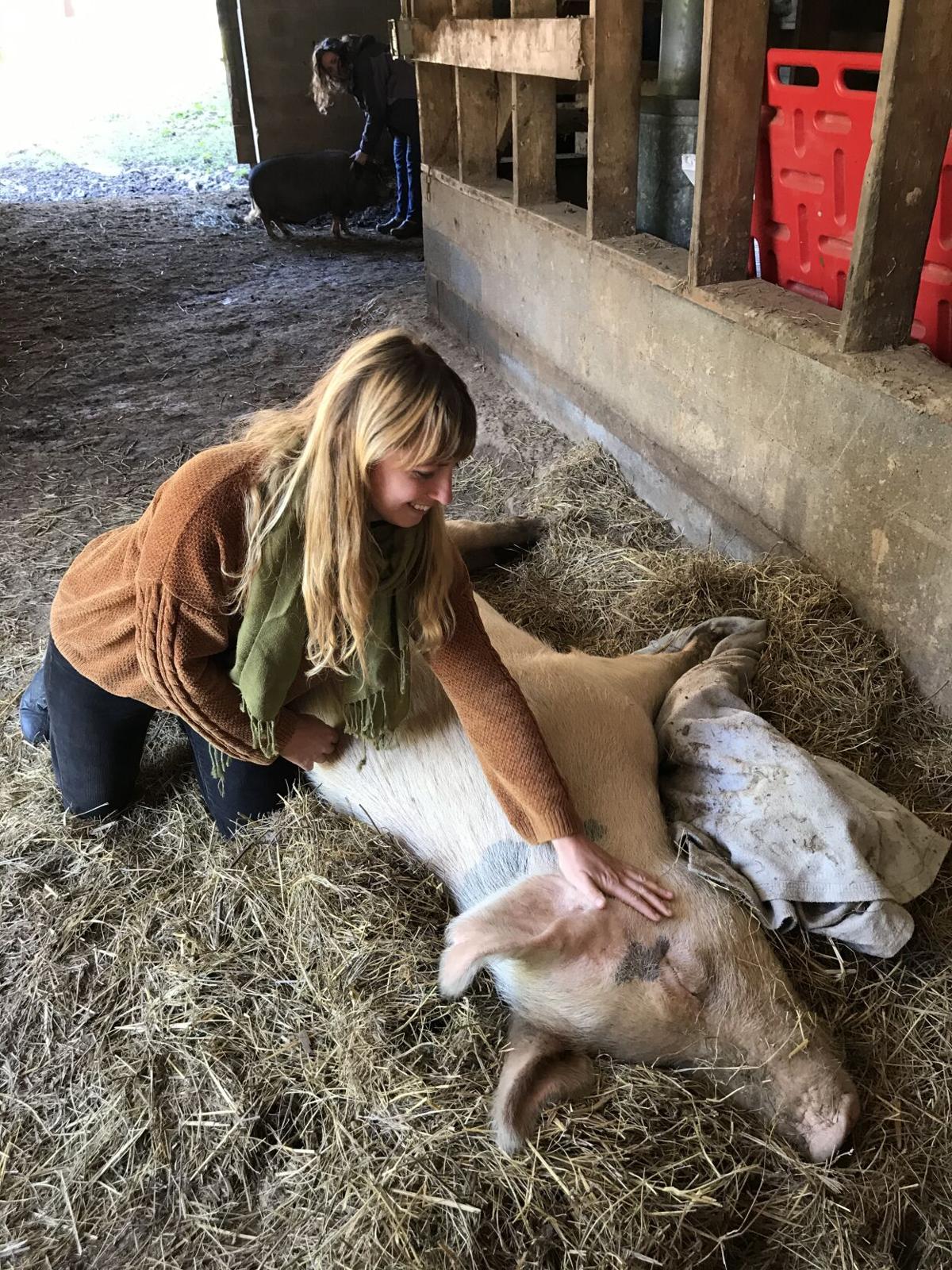 {p class=”p1”}APPLE OF HER EYE — Apple the pig gets a much-loved head scratch and a snuggly blanket from Sarah Windle, who says she likes to cover up her pigs when it gets cold.{span class=”Apple-converted-space”} {/span}{/p} 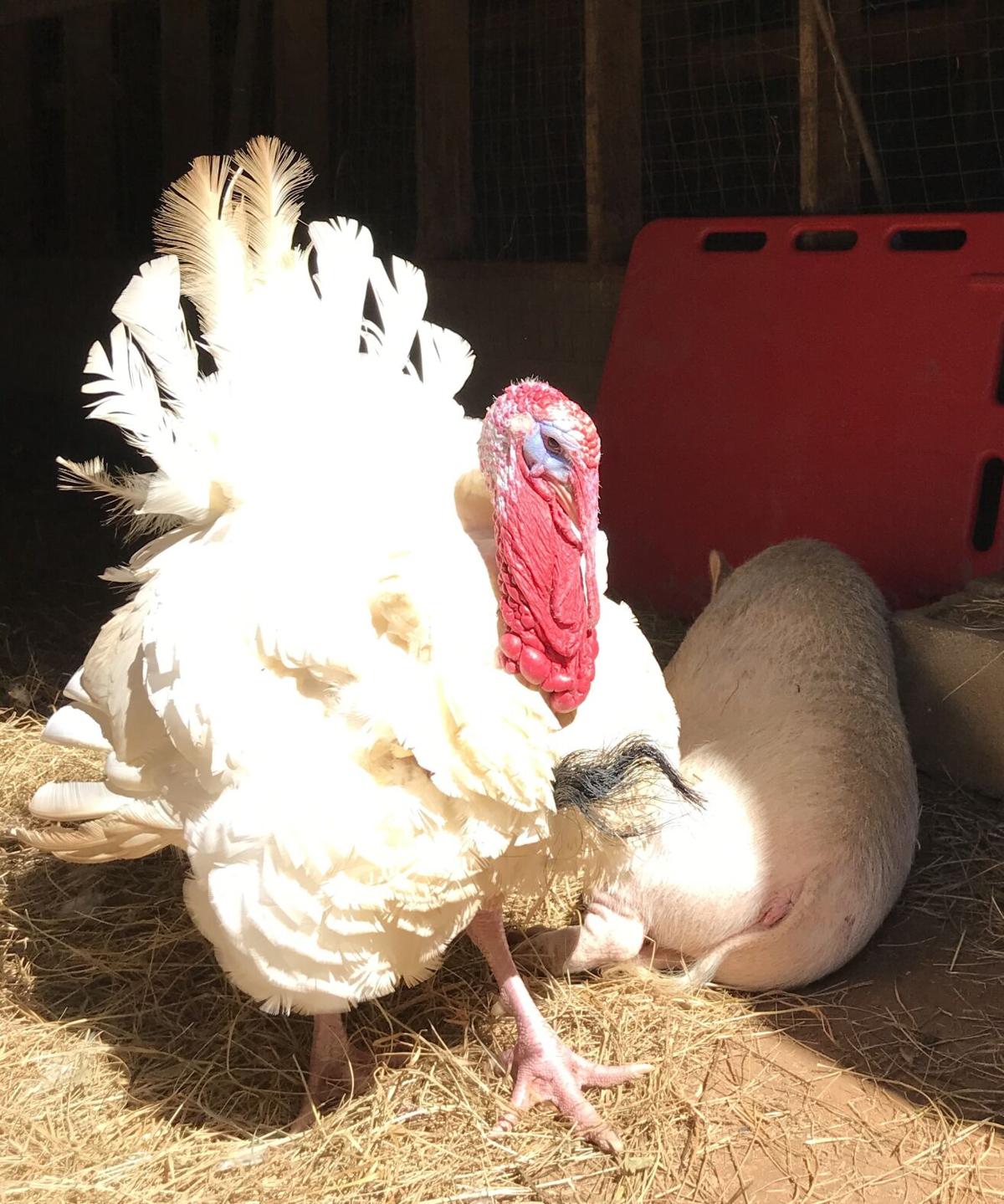 A BOY NAMED ESTHER — Esther the tom turkey struts around his new digs. Esther was rescued from the road after falling off a slaughter truck. 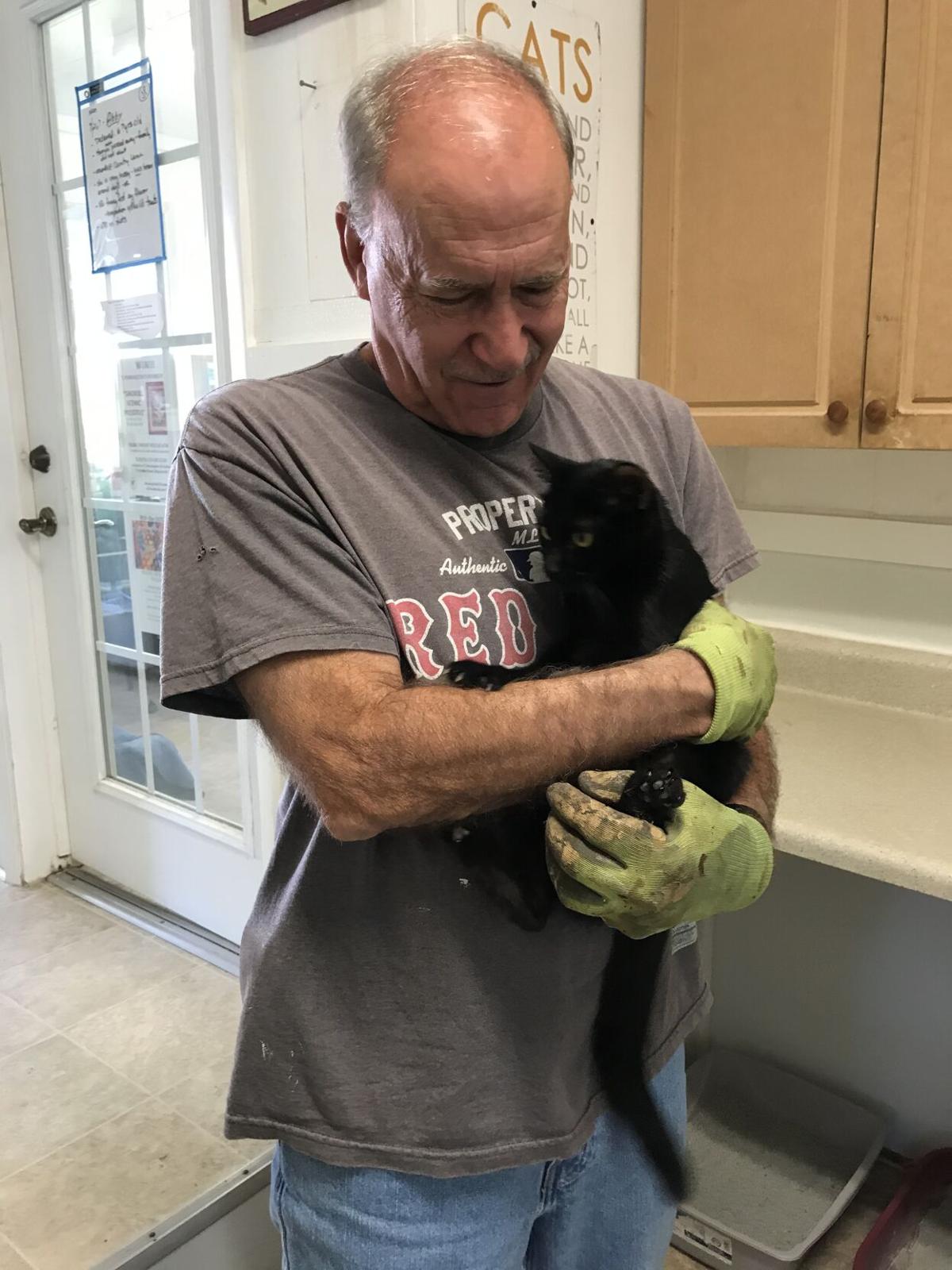 A HANDY MAN — FUR board member and volunteer Scott MaClay takes a break from repair duty for a quick cuddle. 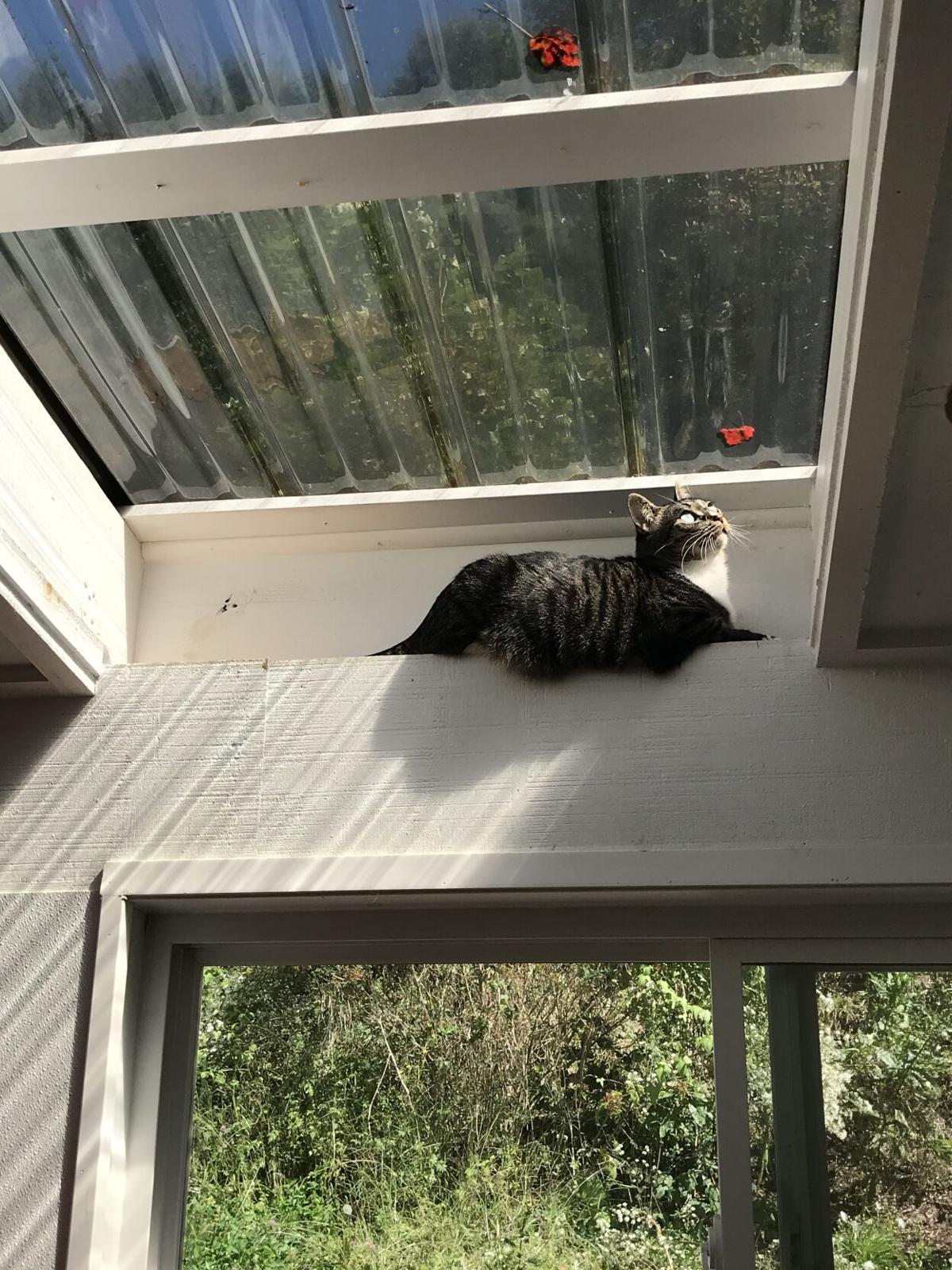 A PURR-FECT SPOT — A cat awaiting adoption basks in one of FUR’s many rooms. The no-kill shelter offers a cage-free environment where cats can roam and play. 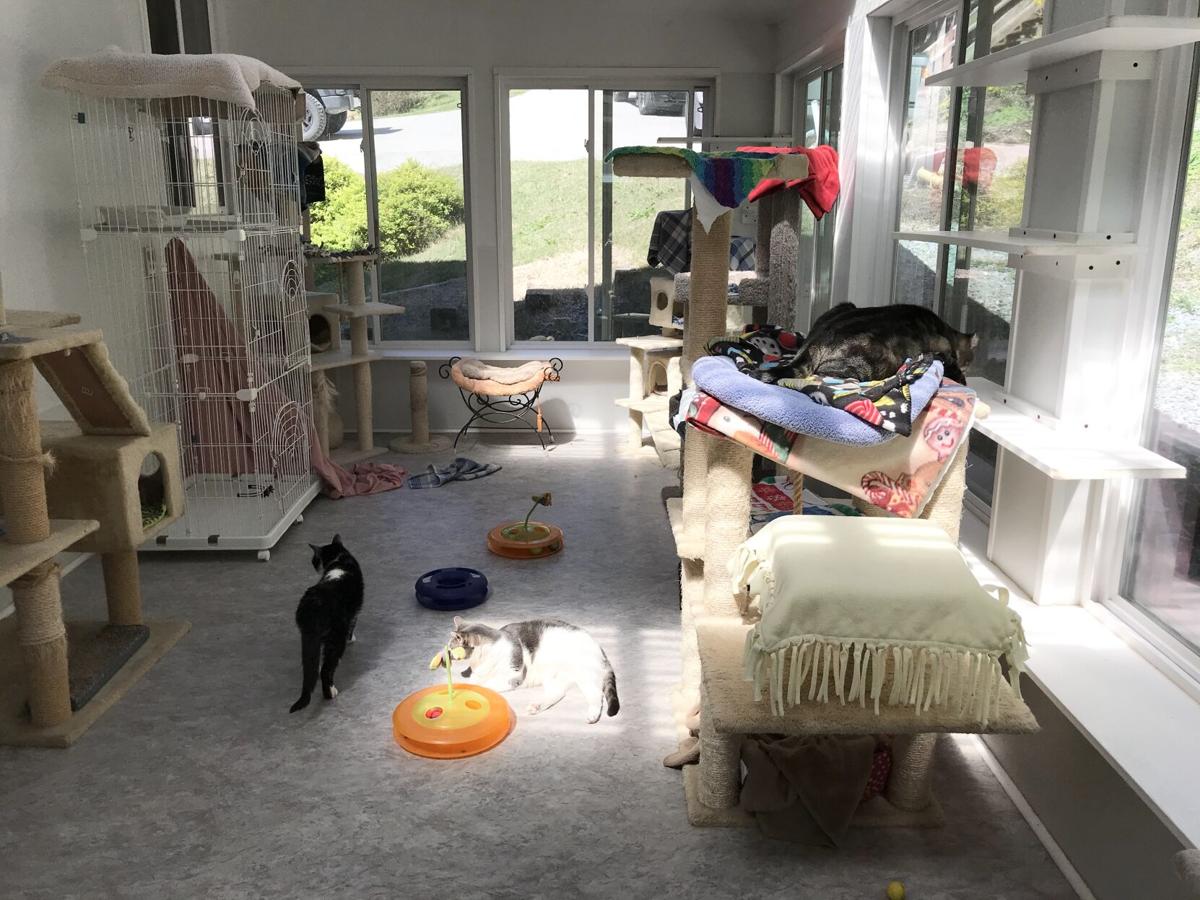 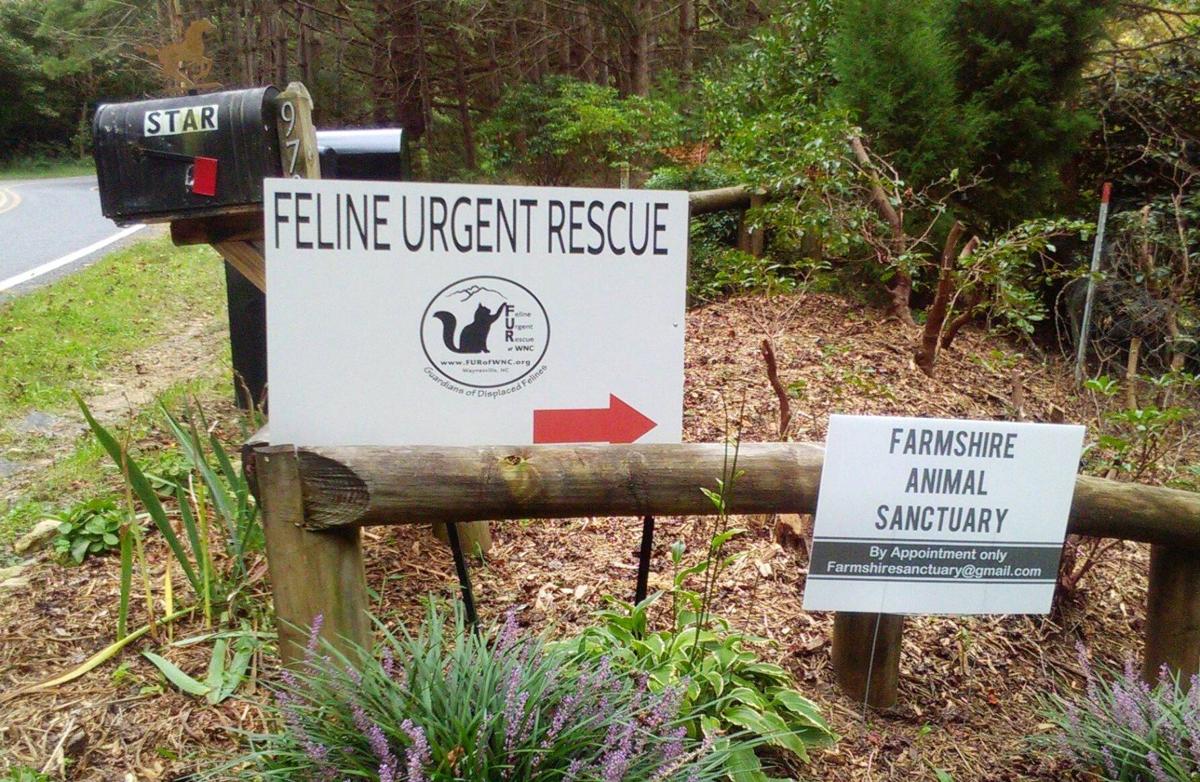 THREE WAYS TO HELP — The red cottage in the foreground is the home of Feline Urgent Rescue (FUR), while Farmshire’s barn is visible in the background. Directly across from Farmshire, behind the trees, is STAR horse rescue.

{p class=”p1”}HAPPY HORSE — Karen Owens shows off one of her success stories, Baby, who has come a long way on the road to recovery from when she first arrived at STAR ranch.{/p}

{p class=”p1”}APPLE OF HER EYE — Apple the pig gets a much-loved head scratch and a snuggly blanket from Sarah Windle, who says she likes to cover up her pigs when it gets cold.{span class=”Apple-converted-space”} {/span}{/p}

A BOY NAMED ESTHER — Esther the tom turkey struts around his new digs. Esther was rescued from the road after falling off a slaughter truck.

A HANDY MAN — FUR board member and volunteer Scott MaClay takes a break from repair duty for a quick cuddle.

A PURR-FECT SPOT — A cat awaiting adoption basks in one of FUR’s many rooms. The no-kill shelter offers a cage-free environment where cats can roam and play.

“Now there is a plan!” declared Save the Animals Rescue (STAR) founder Karen Owens, introducing her newest tenant and animal lover Sarah Windle, who purchased the sanctuary’s barn in July.

While there always has been a mission for STAR, which is dedicated to helping abused and abandoned horses, Owens is referring to the legacy of the sanctuary she and her husband, Jim, started 15 years ago in the northwest part of the county.

Windle, who is the president of Farmshire, a nonprofit dedicated to helping large farm animals, arrived at STAR ranch earlier this year when she learned that the rescue had put its barn on the market.

The sale of the barn and three of its acres was proposed by Owens to STAR’s board of directors as an out-of-the-box idea to help raise money to pay for much-needed operating expenses.

“Since COVID happened, we haven’t been able to do any fundraising and we are dying, in capital letters. We need donations,” Owens said.

Originally, Owens said she faced some questions about selling the barn.

“I told them that we had something to sell to bring in some money,” she said.

To hear the idea fleshed out is to appreciate Owens’ ingenuity.

“The whole thing is I’m slowing down, but I need younger blood and she’s me 40 years ago,” said Owens, pointing to Windle.

“All I own is a truck. Everything is in the name of the corporation,” Owens said. “When Jim and I first started we needed to deed everything over to STAR so that the sanctuary would have an asset base. That makes it much more appealing to someone who wants to keep it going.”

When the innovative deal was struck, Windle netted the top part of the barn for her living quarters, the lower level for her 25 rescue animals and three acres of fenced pasture.

The real beauty of the transaction is that Windle’s mortgage payments will become a steady stream of monthly revenue for STAR.

Adding Windle’s sanctuary to the mix helps those living and working at the ranch in an unexpected way.

In addition to STAR and Farmshire now calling the property home, Feline Urgent Rescue (FUR) has occupied space at the ranch for eight years.

“We are now the largest animal rescue in Haywood County — STAR, Farmshire and Feline Urgent Rescue (FUR) — and that’s rare to have three 501-C3s in the same place,” Owens said.

To hear Owens talk about the transaction is more like listening to someone who helped forge a merger rather than broker a sale.

“She (Windle) has three of the eight acres, STAR now has one and FUR has four. It’s all blended; we do a lot of sharing, and we use every inch of it. It’s a God thing,” Owens said.

When Sarah Windle had to wrap up Farmshire, the rescue she and her partner spent seven years building in Clyde, her first thought was what would become of her animals.

“The first thing I did was get a real estate agent,” Windle said.

“It was serendipitous for sure, when he told me, ‘You’re not going to believe this. I found another sanctuary that’s selling part of their land.’ ”

Windle said she recalled corresponding with Owens years earlier when she was working with the horse carriage operators in Asheville about better treatment for the equines.

“Her email address popped up in my search history, so I knew we had corresponded before. But that’s the animal rescue world,” Windle said.

Windle never dreamed the brief email exchange years earlier would morph into a solution to her current situation.

Back at STAR ranch, Owens was working hard to convince her board that selling the rescue’s barn was a good idea. But six months worth of showing the property to potential owners who expressed interest in turning the space into everything, including a junk yard, was enough to make her start to change her mind.

“Then she gets out here,” Owens said, pointing to Windle, who wore a wide, shy grin on her face.

“She’s no bigger than a minute. She looked like Barbie, and I thought she would complain about breaking a nail,” Owens said. “But within five minutes, she changed my mind. She didn’t even see the apartment, but instead talked about where her pigs were going to sleep and where she was going to put the chickens, and I knew this was my girl.”

That first meeting lasted about an hour.

The next time Windle visited the ranch she checked out the bunkhouse.

“It was great for me to find a sanctuary for the 25 animals I had,” Windle said. “If you’ve ever bought a house you know how difficult that is. I had to find a place with a barn and pastures, and think about building fencing. When I actually got a chance to talk with Karen and told her I had a nonprofit, too, I saw the light going on.”

And that was that.

The third time Windle returned was as the owner of the barn.

Having the communal spirit, Owens and Windle agree, will go a long way in reducing the burnout they’ve experienced in one way or another over the years. The feeling, both say, is unavoidable due to the sheer nature of the calling.

“They call it burnout, and it is a real deal. I have seen it over and over. People last two or three years here and then they’re gone because it is brutal.”

Echoing Owens’ comments, Windle said, “Founders have a problem saying no, and they also have a problem taking care of themselves. I think martyring yourself and trying to carry that burden alone will eventually eat away at you.

“The hardest part for me is checking all my emails and (seeing) all the animals I have to say no to. I must say no to about 10 animals a week, usually roosters and pigs due to the backyard egg industry and pot-bellied pigs people don’t realize will grow to be 400 pounds. But then I step away and focus on the ones I can say yes to.”

Day in and day out, it’s the constant flow of information about animals that need help that can drive an advocate crazy.

“A big part of our mission is education,” said Windle, describing the Zoom classes she’s started with school-age children to boost animal awareness.

“We can’t take too many more animals, so we teach students about care and respect. Essentially, these animals here are ambassadors for the work that we do.”

“This is continuing the dream Jim and I started,” Owens said. “STAR stands for Save the Animals Rescue, and it doesn’t matter if they have feathers or fur, or claws or hooves. All animals are welcome.”

In addition to its work with horses and Farmshire’s focus on farm animals and education, STAR supports accounts for dog owners working through tough times at Junaluska Animal Hospital, and there is even a fund at Riverview Farm & Garden in Canton that helps people who need assistance feeding their animals.

Last but not least, there is FUR.

These “guardians of displaced felines” can trace their rescue’s roots at the ranch to STAR volunteers who saw a need for a place to house the furry critters that were holed up in Owens’ barn.

From its original location on the top level of Owens’ barn, FUR has grown into its own verified nonprofit, occupying a 2,500-square-foot building that was built entirely with donations.

Today, the two-story red cottage marks the entrance to the compound.

“We are a completely cage-free facility, which allows us to get to know our cats very well. That in turn helps us adopt them out,” said Lisa Sanborn, president of FUR.

On the subject of their new neighbor, Sanborn said, “It’s a unique situation to have three rescues on one property. Many of our volunteers do double-duty at STAR and are looking for an opportunity to start helping Farmshire, as well.”

In the end, all three rescue operators agree that it’s about the creatures and ensuring they have adequate care.

“We are the animals’ voice,” said Owens. “You can hear them if you listen, and we hear them.”