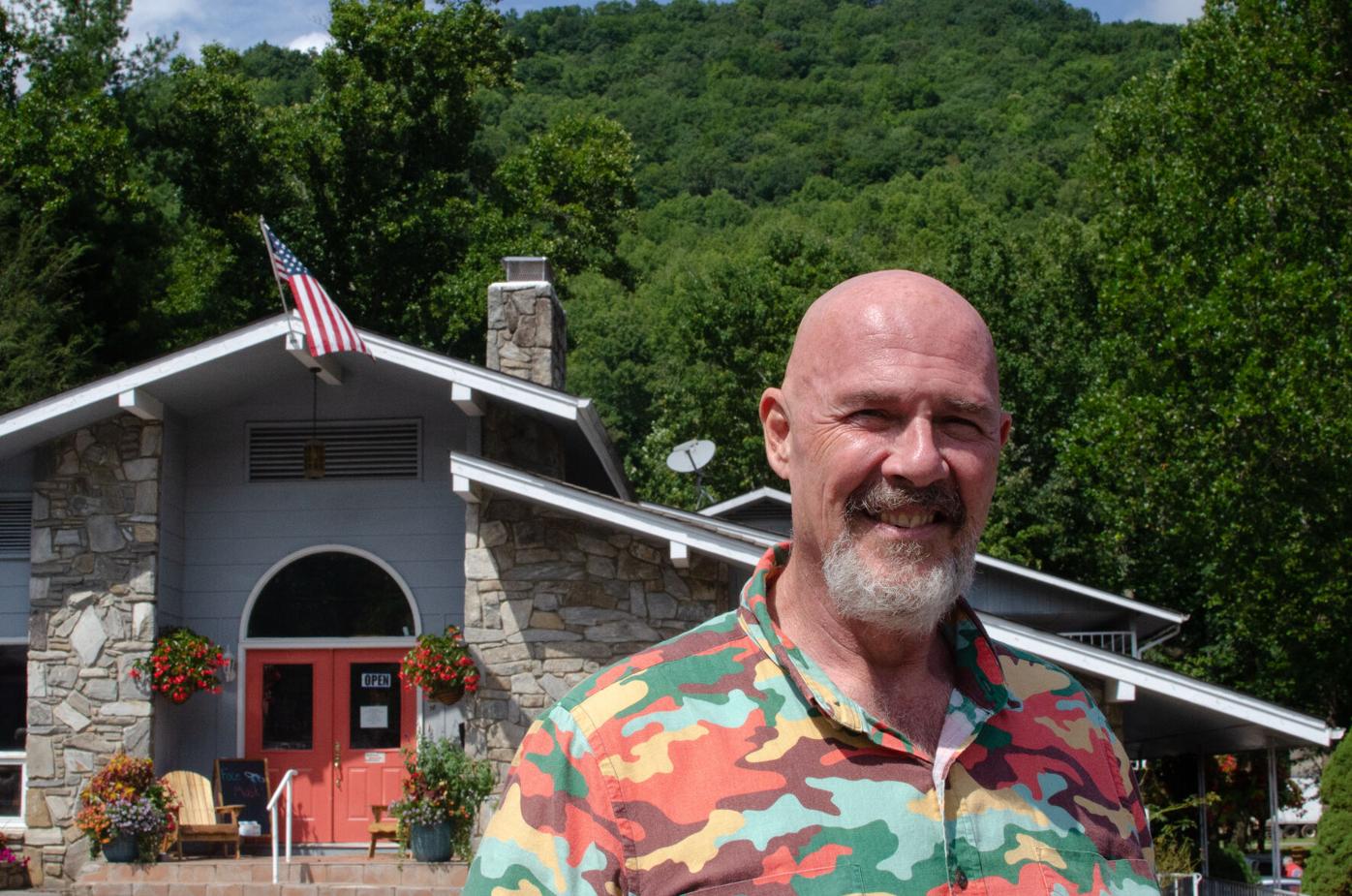 Joseph McElroy takes a break from cleaning rooms between guests at the Meadowlark Motel. 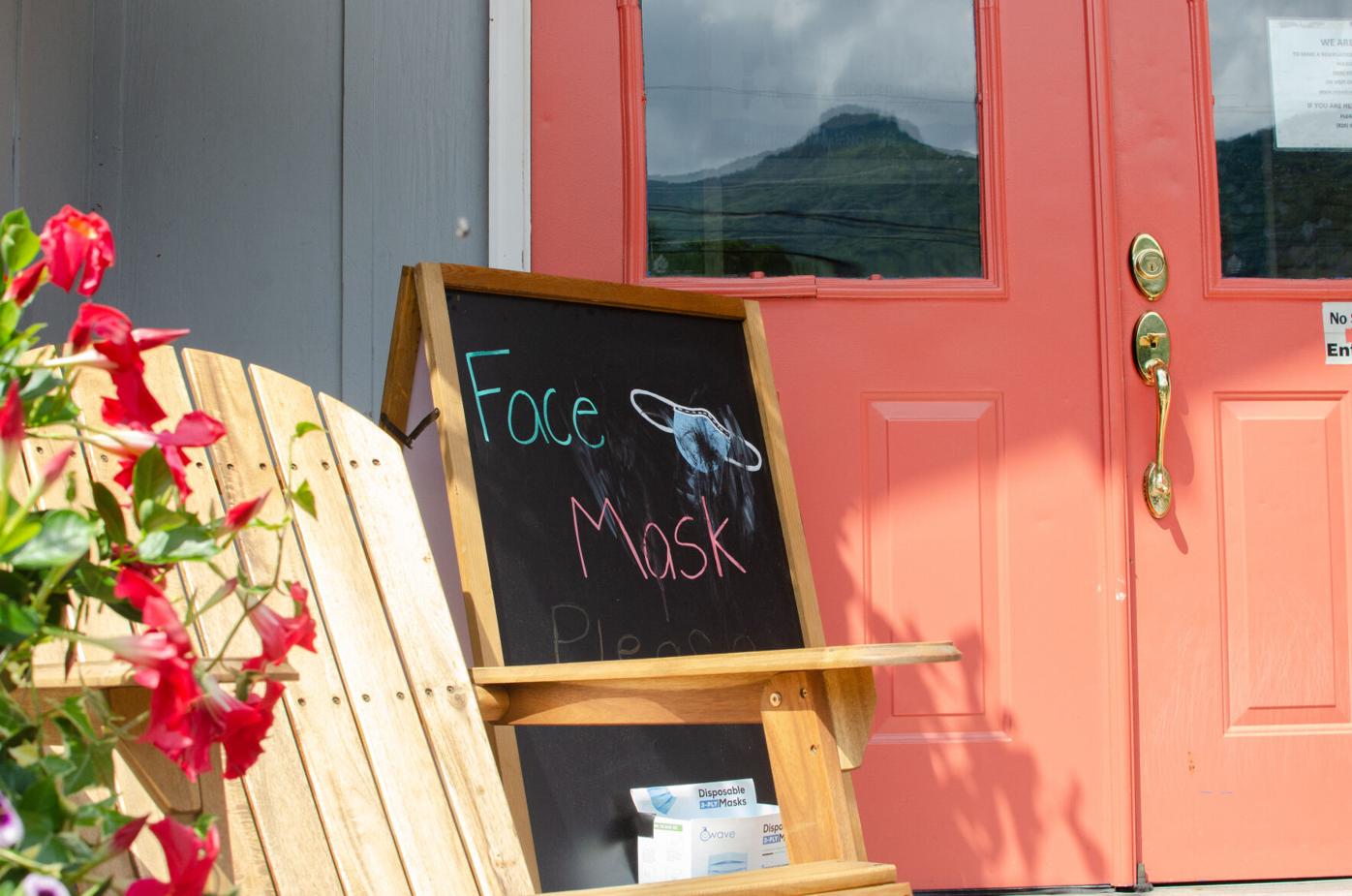 Face masks are required to enter the lobby of the Meadowlark Motel. 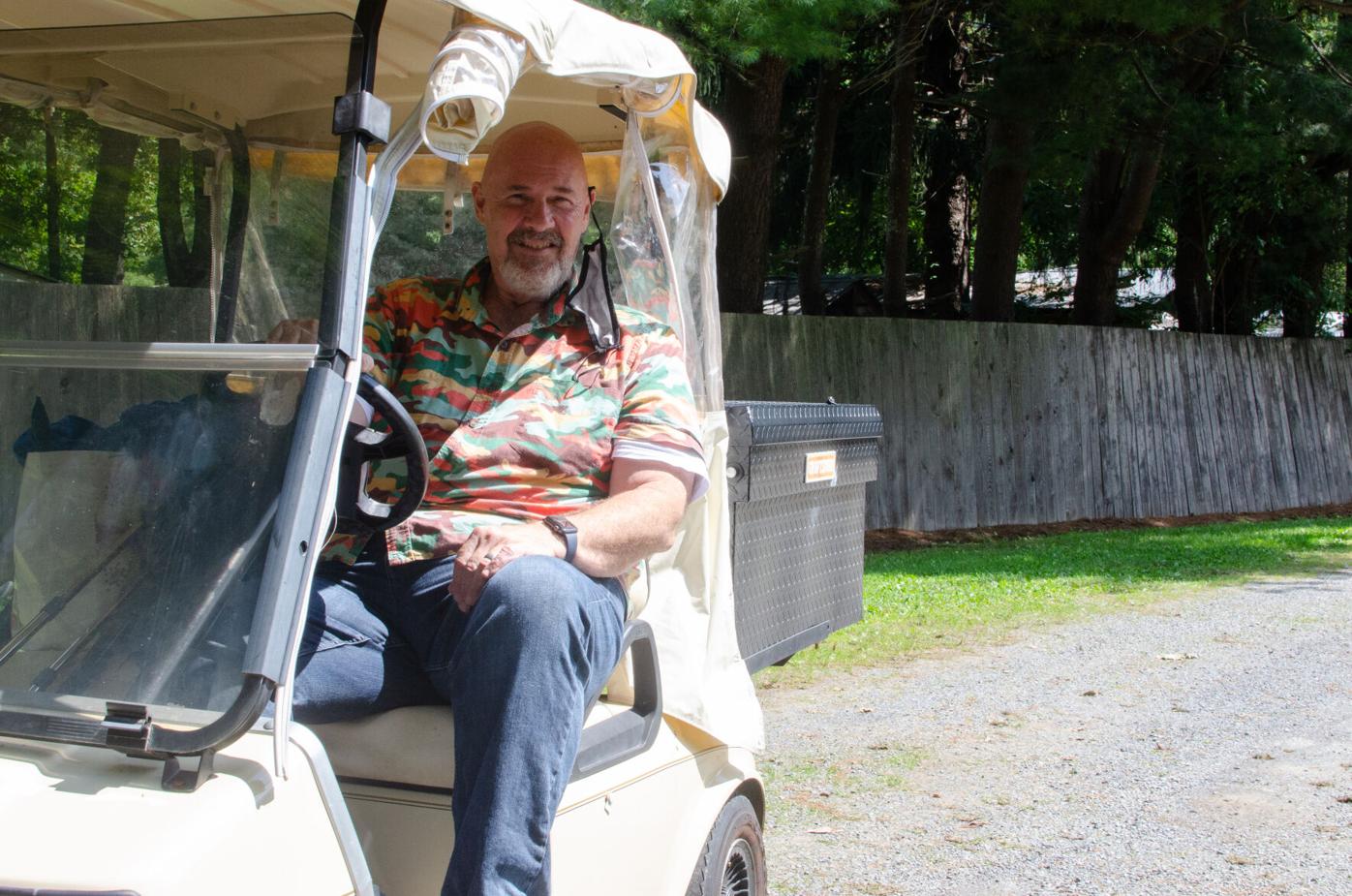 McElroy is optimistic about the future of his business, even though it means rebuilding his staff.

Hospitality is in Joseph Franklyn McElroy’s blood. McElroy grew up in Maggie Valley, helping his parents run the Meadowlark Motel, a 34-room hotel off the main drag in Maggie Valley.

It sits on four acres of land on the bank of Jonathan Creek, framed by the Great Smoky Mountains. But what McElroy remembers best about growing up in a motel is having to clean rooms with his siblings — with one exception.

“Us boys made my sister clean the bathrooms,” McElroy laughed. “We were bad back then.”

Since then, McElroy has gone on to act as CEO of Galileo Tech Media, a travel marketing company. His wife, Simone, is also in the travel business. She is president of BlueOrange Travel, a luxury travel agency, so it seemed like a natural choice for them to take over Meadowlark from McElroy’s parents in 2018.

Since then, McElroy has split his time between Maggie Valley and New York City, where Simone and their 3-year-old twin daughters live. Even in a non-pandemic year, it’s a lot.

Little did he know that in 2021, he would be right back where he was as a kid — cleaning rooms at the Meadowlark Motel.

The past year has been somewhat tumultuous for McElroy. Back in 2020, when the COVID-19 pandemic first hit, he wasn’t able to visit Meadowlark for months. He was finally able to visit the motel more regularly this year, once vaccines became more widely available. But then, COVID cases surged again due to the highly-transmissible delta variant.

McElroy was surprised to discover that virtually none of his staff at Meadowlark had been vaccinated. He wanted his family to be able to visit — including his daughters, who are too young to be vaccinated.

“In a sense, this is my home, so in some ways I felt violated,” he said.

So he went back and forth on what to do, consulting his manager at the time, as well as friends and family. In the end he made the decision he felt was right for his clientele and family — recommend vaccines for managerial staff; mandate custodial and front desk staff to wear masks.

Instead of complying, six of his nine employees quit, leaving McElroy to essentially fend for himself. One manager who had already given his notice to quit left soon after. McElroy was left with only two staff members.

“Since we lost so many staff, I had to run everything,” McElroy said.

So, McElroy set to work, doing what he grew up doing — cleaning rooms himself between guests.

But was able to find his rhythm. McElroy has kept at it now for four weeks, only returning to his home in New York once. He hasn’t been completely on his own, though. McElroy’s wife Simone flew in to help run the front desk. Drummer Mike Ogeltree, one of McElroy’s friends, also pitched in to run the front desk.

McElroy knows he can’t look back, but he’s hopeful for the future.

“I’m not trying to browbeat anybody, I was just trying to do what I think is right,” he said.

Rebuilding, one day at a time

The Meadowlark Motel has the chance for a fresh start. McElroy decided to mandate new hires to be already vaccinated or get vaccinated shortly after starting. This ensures there are no surprises on either end of the aisle.

He knows requiring vaccinations in Maggie Valley may not be popular — the town is home to dozens of hotels, motels, inns and vacation rentals without vaccine requirements. In fact, McElroy thinks he’s the first to enforce any such rule for staff members.

For newly-appointed general manager Boyd Burton, a vaccine mandate is no issue. He moved to Maggie Valley from Richmond, Virginia, for the area’s motorcycling community, but stayed because he found a great work environment at Meadowlark.

“Joseph [McElroy] ran through all his ideas, and I thought, ‘This guy’s doing stuff I want to do,’” Burton said.

Burton is especially interested in Appalachian music and heritage, so he’s excited to get involved with the motel’s Smoky Mountain Heritage Center. He’s working with McElroy to expand the motel’s offerings, from private dinners featuring locally-foraged ingredients, to building out programming with the Heritage Center.

It’s been a difficult month, but McElroy says he’s learned a lot. And even after he finds additional custodial staff, he vows to stay connected to that aspect of the business.

“I like to be involved in a team, and I realized I was disconnected from my staff,” he said. “After this, I plan to come back once a month to clean rooms.”

Thanks to Mr. McElroy for being a model responsible American citizen. He's done the only sane thing to keep his family, himself, and other employees and customers safe. I would use only motels and hotels with vaccinated staff if I were traveling.

I am vaccinated, and I wear a mask out of respect and concern for my family, friends, and community. I feel it's my unselfish contribution to reducing the risk of getting or transmitting COVID. I do this from a perspective of the heart, not out of fear or government compulsion. I love my family and community and will do anything to help keep them safe.

Kudos to Joseph McElroy for doing what he, and many of us, believe to be the right thing. Vaccines are not political, they are science. Vaccines save lives.

I agree! I wish Mr. McElroy all the best for doing his part to try to protect others. I hope he will inspire others out there to care more, learn more and do their part.

I would not expect many locals to prefer the idea of a mandate either, so it is likely the owner will have problems.