School will resume in August, but with modifications 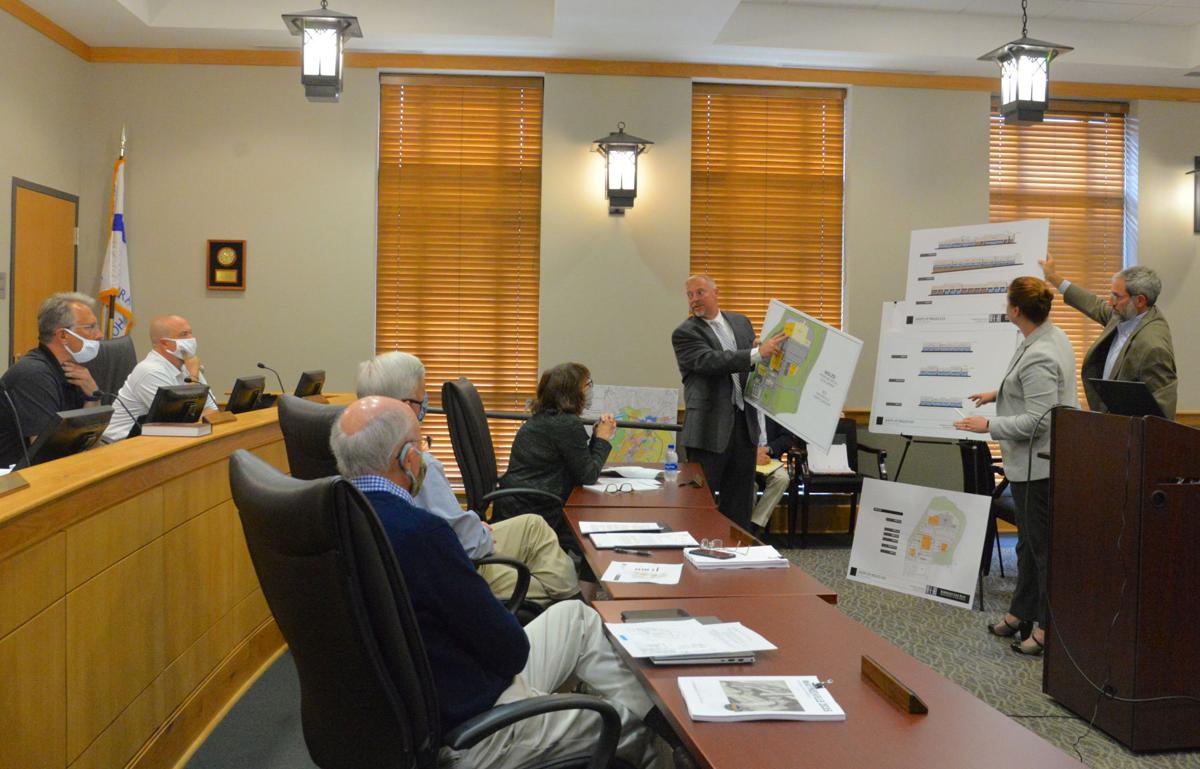 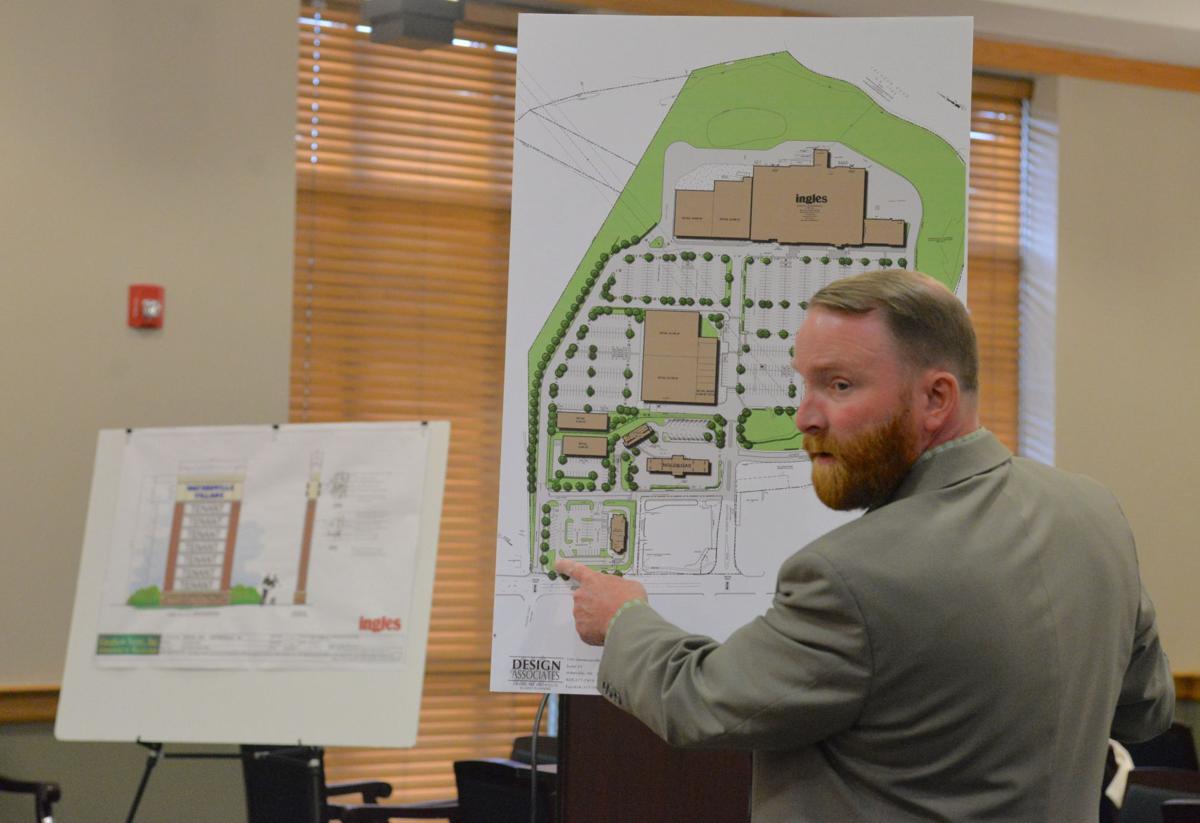 FIRST STEP — Waynesville planning official Byron Hickox points notes the location of the new gateway entrance for the development off Russ Avenue, which is now just a side road into Chick-fil-A. 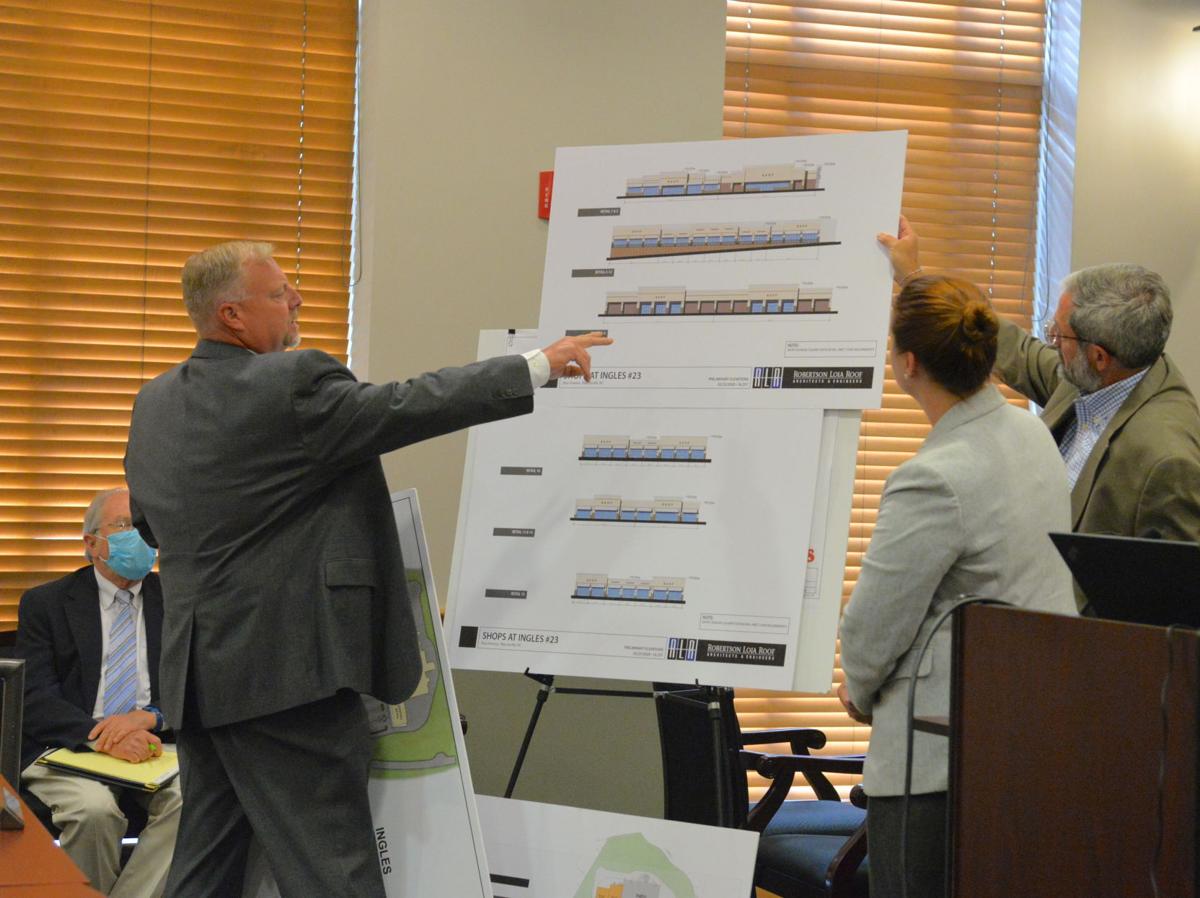 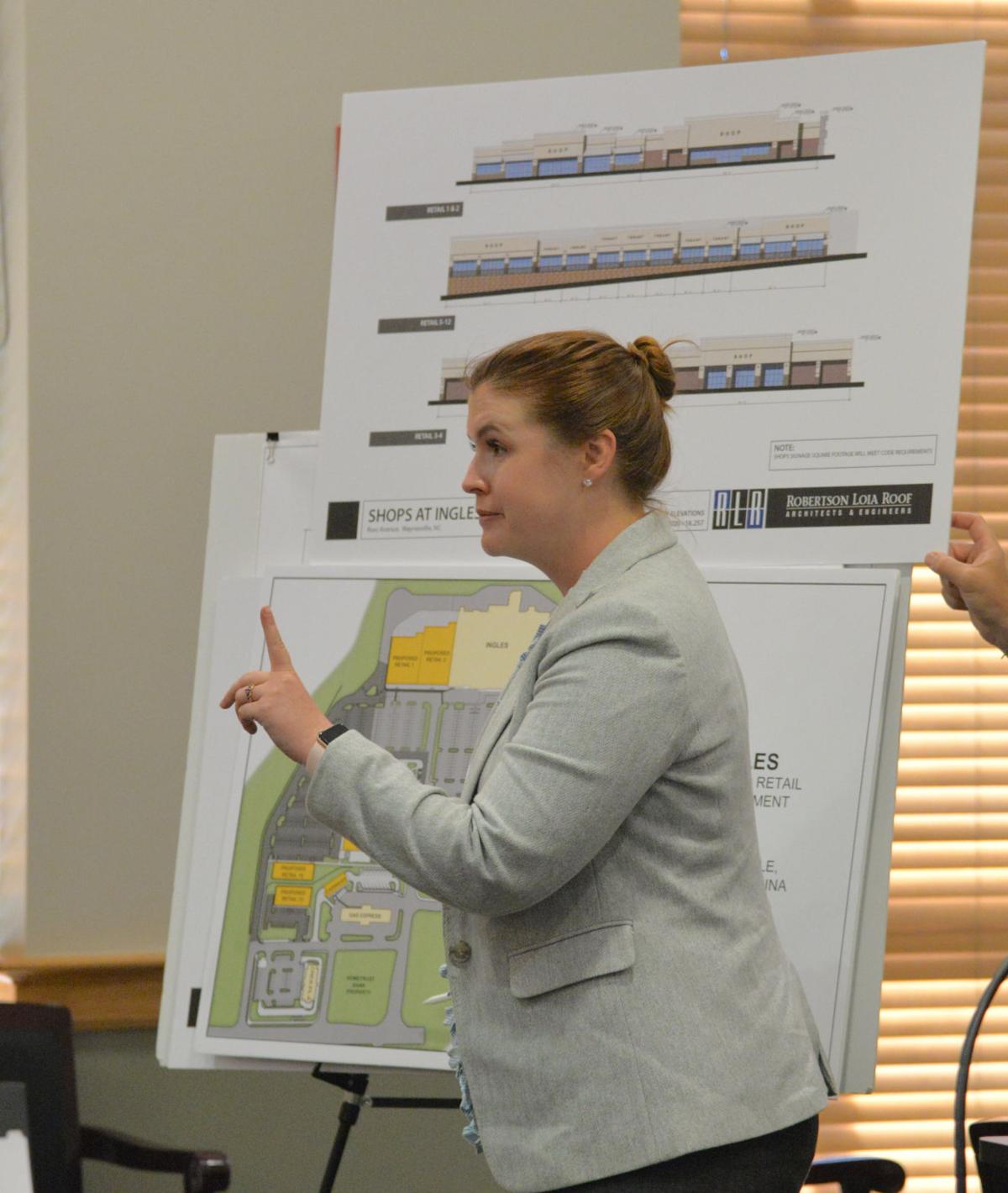 SELLING THE PLAN — Martha Bradley, an attorney representing Ingles in its development plan review, highlights the economic merits of the new up-market retail complex at a Waynesville Planning Board meeting. 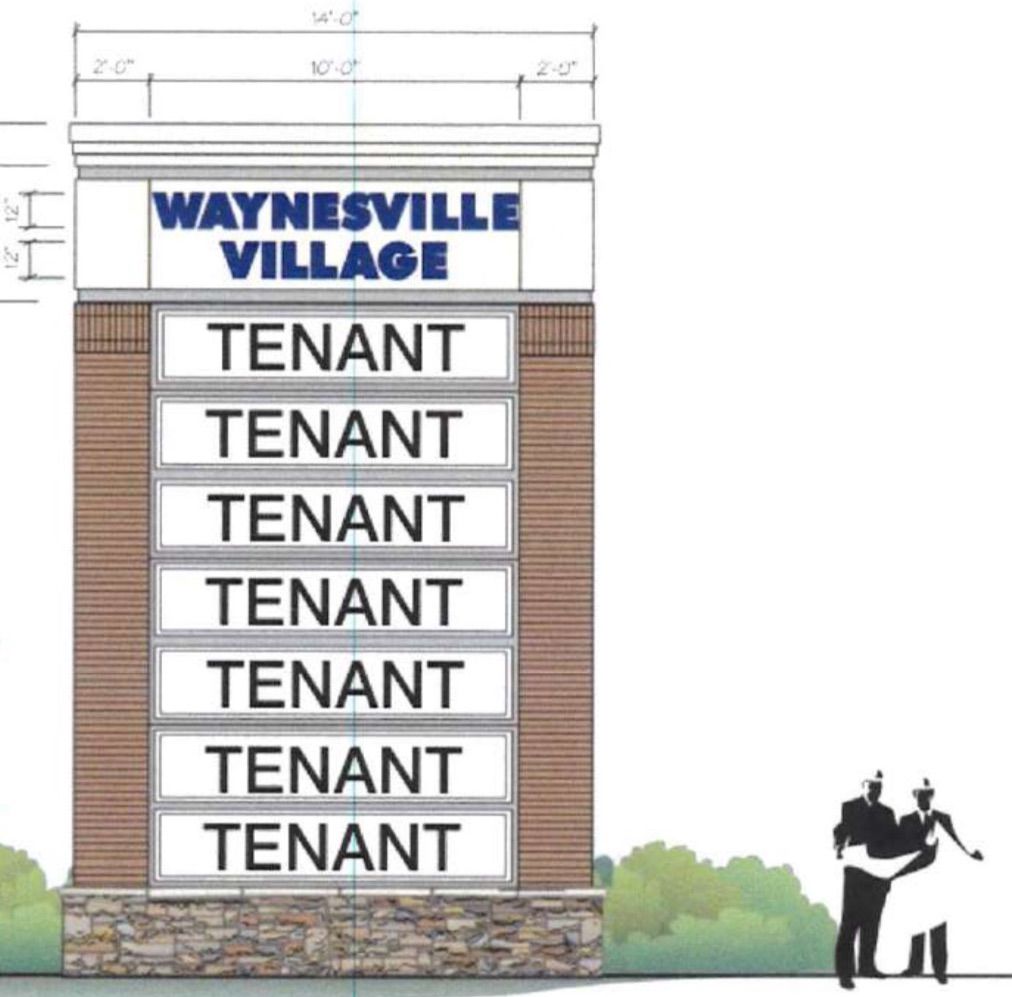 BIG SIGN — This 23-foot-tall monument sign would be located at a secondary main entrance to the development beside Chick-fil-A. Waynesville Village is one option for the shopping center’s name, but is still under consideration.

FIRST STEP — Waynesville planning official Byron Hickox points notes the location of the new gateway entrance for the development off Russ Avenue, which is now just a side road into Chick-fil-A.

SELLING THE PLAN — Martha Bradley, an attorney representing Ingles in its development plan review, highlights the economic merits of the new up-market retail complex at a Waynesville Planning Board meeting.

BIG SIGN — This 23-foot-tall monument sign would be located at a secondary main entrance to the development beside Chick-fil-A. Waynesville Village is one option for the shopping center’s name, but is still under consideration.

Ingles has unveiled grand plans for turning its hilltop complex in Waynesville into a large commercial shopping complex — one that would further solidify Haywood’s role as the commercial hub for counties west of Asheville.

Plans call for the construction of 16 new storefronts with more than 130,000 square feet of retail on the 35-acre hilltop site off Russ Avenue.

“It provides exactly the kind of opportunity sought by up-market national retail brands,” said Martha Bradley, a land-use attorney representing Ingles. “These national retailers look at Waynesville as their opportunity to tap into the far western communities for whom Asheville is too big, too far away, or both.”

The multi-pronged development would be constructed over several years. It includes renovating the former Belk building, adding a collection of strip mall-style storefronts and constructing several stand-alone buildings. Major site work calls for leveling the hillside behind Belk with a tall retaining wall.

Ingles has a few businesses tentatively lined up for some of the spaces, but isn’t naming them yet. Some tenants previously in the pipeline are now stalled due to the pandemic, but others are still committed.

“Some stuff has changed. We’ve lost a couple tenants, but we are hoping that everything is going to turn around and everybody will come back. That is our goal,” said Preston Kendall, Ingles construction manager.

Which portions of the plan are tackled first will be driven by market demand from prospective tenants. Some will get “built on day one,” while others will “take longer to do until we lease them out,” Kendall said.

Ingles CFO Rob Freeman also said it was too soon to say when construction would start or what would be built first while still in the permitting process.

“Until that process is completed we can’t know for sure the order and timing of the development,” Freeman said.

The development is of a scale not seen in Waynesville in over a decade, Bradley said — not since the construction of the Walmart-Best Buy-Belk-Pet Smart-Michael’s complex. While the Ingles project is poised to pique interest from national retail brands, numerous smaller store fronts will hopefully attract local businesses, too.

“Because of the variety of retail space, it could also provide an opportunity for small, local businesses to establish themselves in a great location with high visibility and high traffic,” said Bradley, who lives in Waynesville and works for the Asheville law firm Hall Booth Smith.

The Waynesville planning board took a deep dive into the Ingles site plan Monday. Ingles representatives, armed with an easel and more than a dozen foam board displays, spent two hours walking the planning board through the lay-out of the complex.

While planning board members were generally pleased about the project, some raised concerns about adding to Russ Avenue’s traffic congestion.

In particular, the minor side entrance beside Chick-fil-A will become a major gateway into the shopping center — rivaling the existing main entrance that leads up the main boulevard toward Ingles.

The short side road, which currently makes a quick dog-leg into Chick-fil-A, will be extended behind the Belk building to provide traffic circulation all the way up to Ingles, as well as access to new store fronts on that side of the complex.

Planning board members questioned whether the stop light on Russ Avenue has adequate stacking room in the left turn lane once it becomes a major entrance.

During busy times, the line for the Chick-fil-A drive-thru can back up nearly to Russ Avenue. Adding even more traffic at this entrance could create a bottleneck with cars trying to turn left off Russ into the complex, said Bucky Dykes, a planning board member.

“You clearly already have an issue there, and are asking us to approve something that’s gong to increase the volume of traffic even more,” said Dykes.

“It is also going to drive a substantial amount of commercial activity and provide amenities that are currently only available in Asheville,” Bradley countered. “So we will in a sense become a commercial hub for the majority of southwestern North Carolina.”

Planning board members floated the idea of a dedicated lane for Chick-fil-A.

“Once you come in off of Russ Avenue, you could designate a turn lane into Chick-fil-A and another going straight on through to the development,” said board member Robert Herrmann.

But Bradley said that wasn’t possible. The side entrance road is indeed being widened, but the extra lanes will be for cars exiting the complex — with one lane turning left out onto Russ, one turning right and one going straight across on Frazier Street — and thus doesn’t leave room for an extra lane for vehicles also coming in.

Dykes then asked whether the left-turn lane on Russ Avenue itself could be elongated to allow for more stacking space for cars waiting to turn in.

But Bradley said that’s up to the N.C. Department of Transportation, and since DOT staff is furloughed right now, they can’t have those conversations.

“A lot of this depends on things DOT doesn’t even have answers to,” Bradley said.

Bradley said there would be time to work those out, particularly as the DOT’s Russ Avenue make-over and widening project comes to fruition in a couple of years.

“We are talking about a multi-year project. This is not going to happen next year,” Bradley said. “But we need the permits now to start the planning to start the leasing before anybody ever brings a bulldozer onsite.”

That wasn’t good enough for Dykes, however.

“You are asking us to approve something when you and DOT have no clue how you are going to mitigate an already existing issue at that street,” Dykes said. “I am still not comfortable.”

Another issue that gave some planning board members pause was a large sign proposed for the secondary entrance at Chick-fil-A. Town sign rules limit the number of large signs for a development to one per road frontage. There is already a sign at the main entrance off Russ Avenue, but the developers want a second one at the Chick-fil-A entrance as well.

It would be 23 feet high, listing seven or so businesses located within the complex.

“I have a problem with the sign. It’s big. Let’s face it, it’s huge,” Herrmann said. “I am wondering if there isn’t another alternative for a sign that’s not so invasive.”

The sign is actually under the town’s 25-foot height threshold for monument signs. It would, however, violate the town’s one-sign-per-road-frontage rule and need an exemption to be allowed.

“The biggest issue is that it would be the second monument sign on that street frontage,” said Bryon Hickox, development officer with the town planning department.

Ingles representatives said the large sign listing businesses located within the development would be a deal killer for tenants if not approved.

“Most of these tenants want visibility or they’re not going to come,” Kendall said.

Kendall said some leases are in limbo pending name visibility on an entrance sign.

Some planning board members countered that Ingles could repurpose its existing sign at the main entrance to advertise the internal businesses. But Kendall said they want that sign to be exclusively for Ingles, including its weekly specials and promotions.

Planning Board Chairman Patrick McDowell said if the sign was denied, Ingles could just use a loophole in the ordinance to get it approved anyway.

“Right or wrong, that’s what someone would do,” McDowell said.

“This sign is not out of line with what someone owning this property separately would be entitled to,” Bradley said.

The site plan will now go before the board of aldermen for final approval.

Bradley said the complex will be a big win for Waynesville.

“With the amount of land available for new development within the town in short supply, the infill strategy employed in the design is an efficient use of one of our rarest resources — buildable land — and provides a more sustainable alternative to outward expansion,” Bradley said.

Ingles plans to develop its hilltop site in Waynesville into a major commercial shopping complex. It will be constructed in phases driven by m…