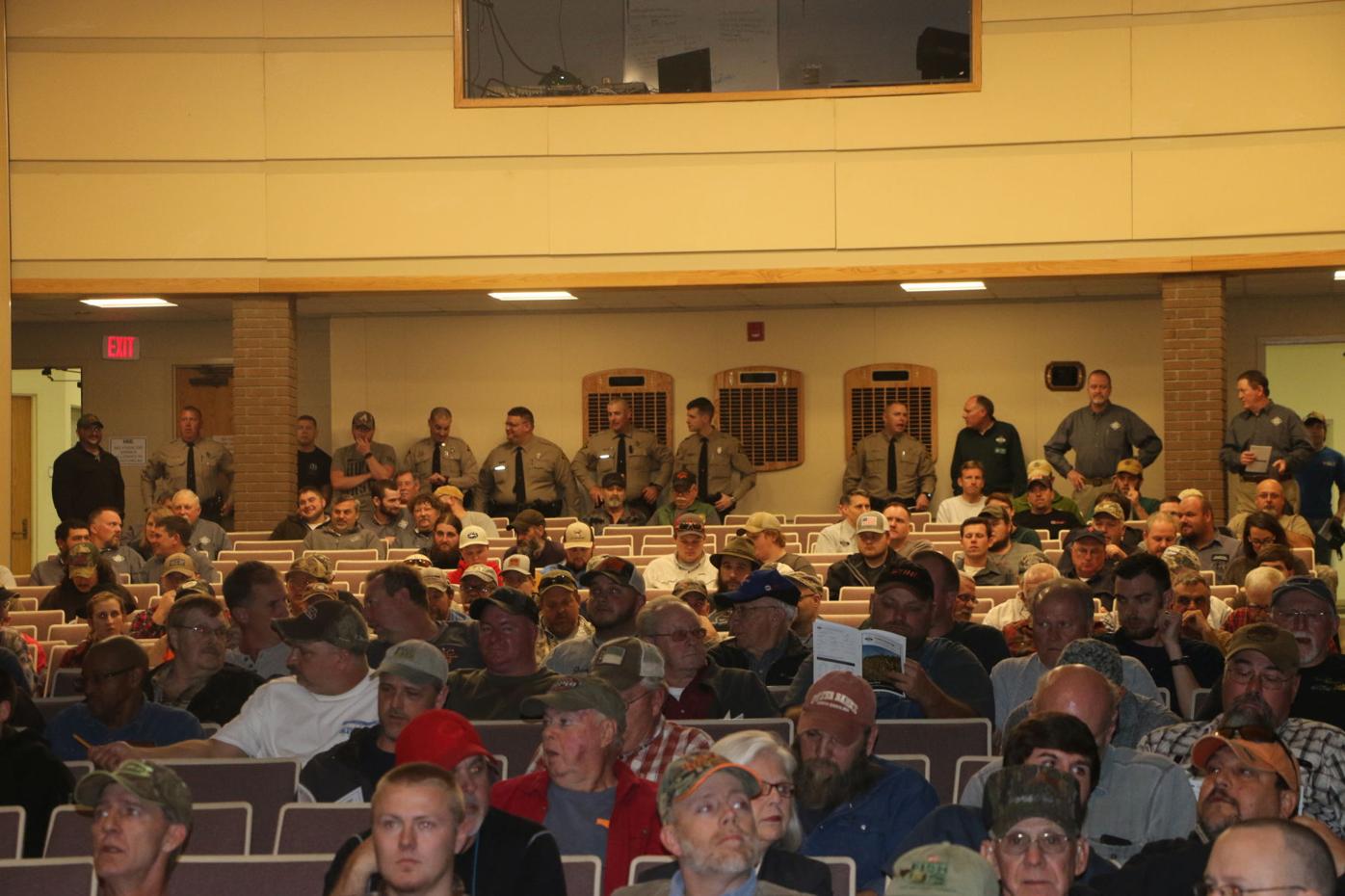 An estimated 270 people attended the hearing. 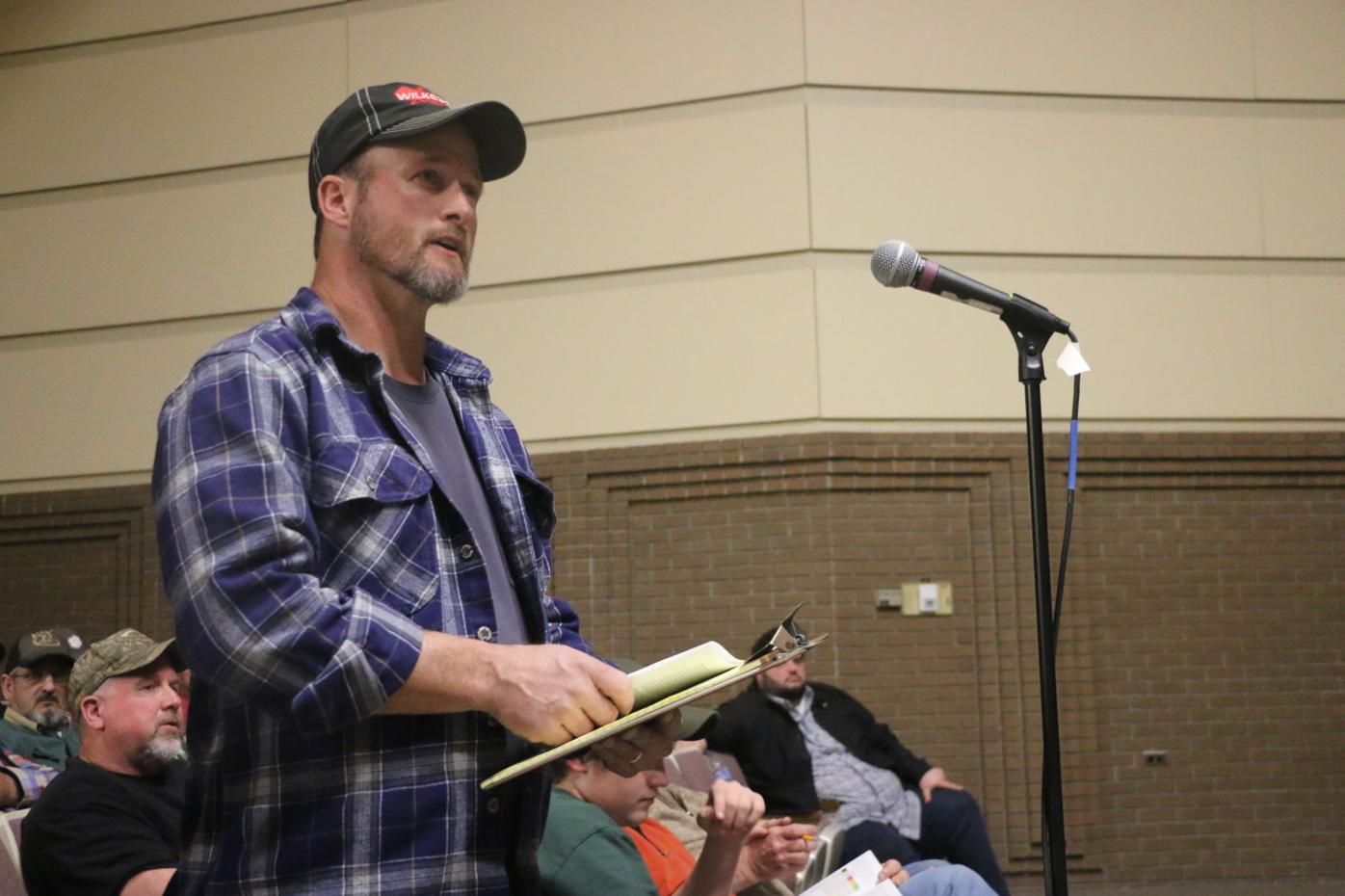 Brent Hyatt made his voice heard regarding changes in both deer and bear season. 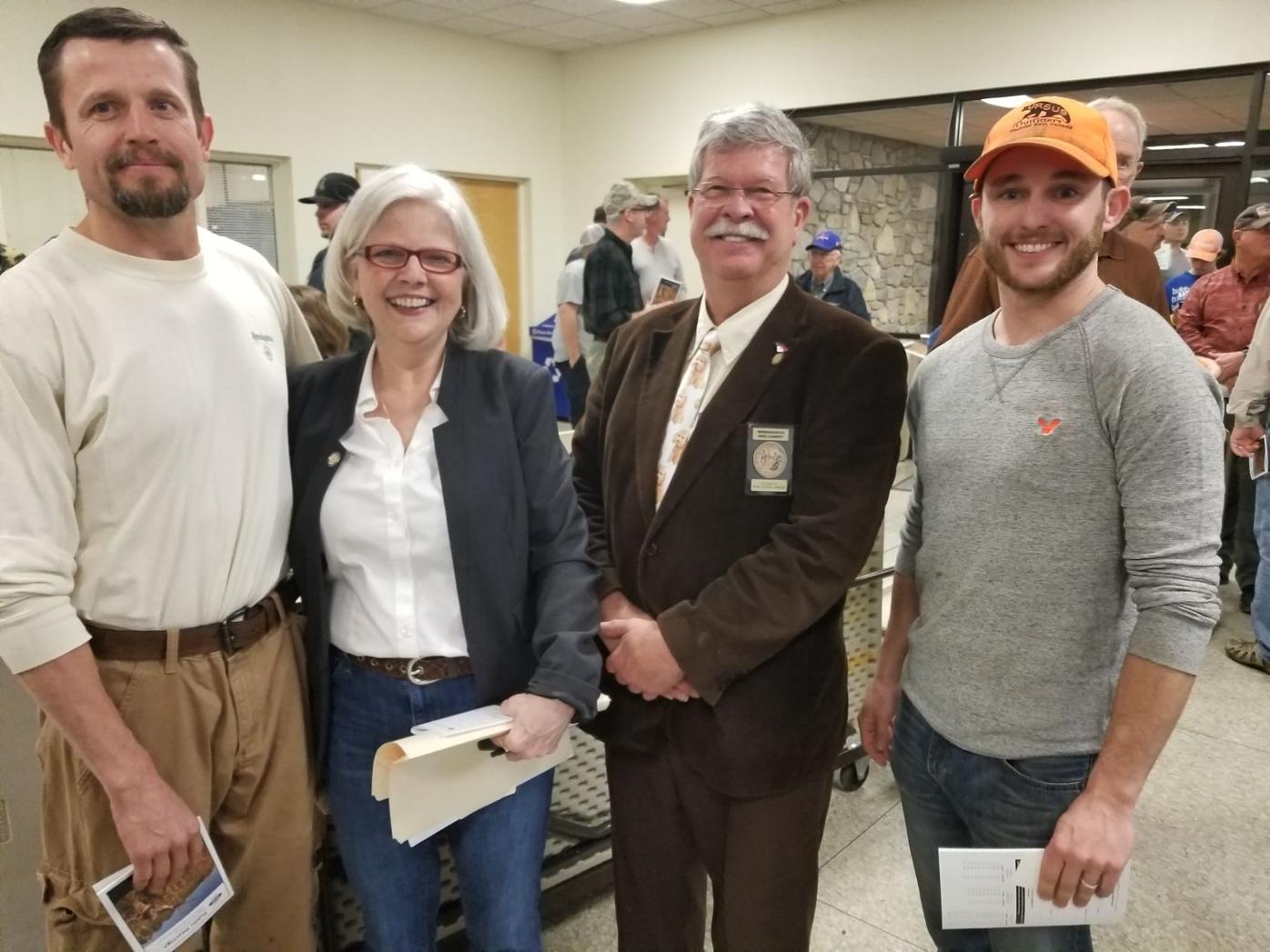 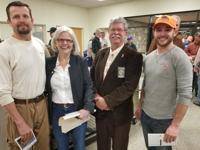 Representatives Michele Presnel and Mike Clampitt took some time before the hearing to mingle with constituents. Seen here are Michael Stiles, left, and Seth Stallard, right, of Cherokee County. 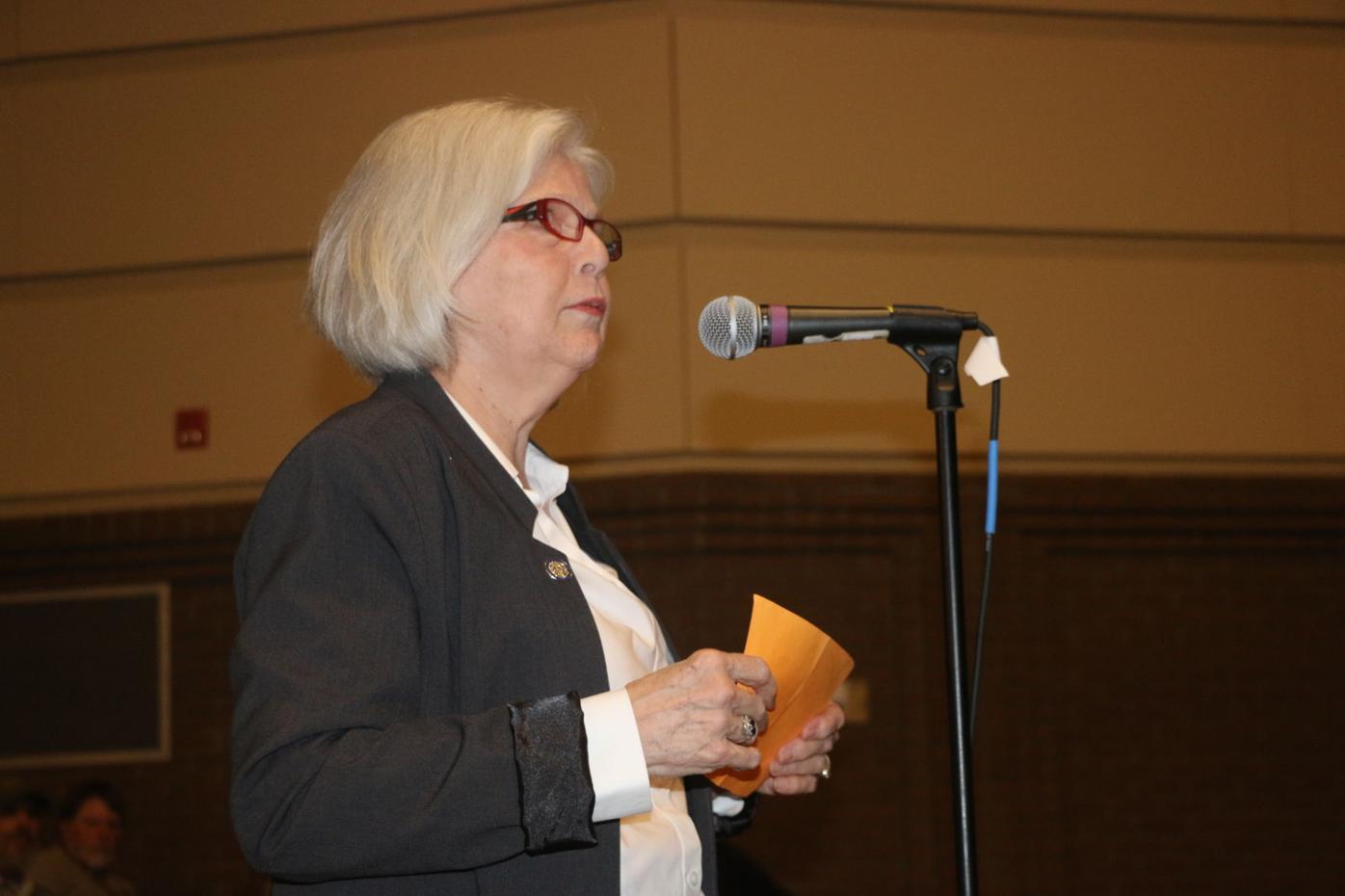 Michele Presnell at an event in Haywood County in February. 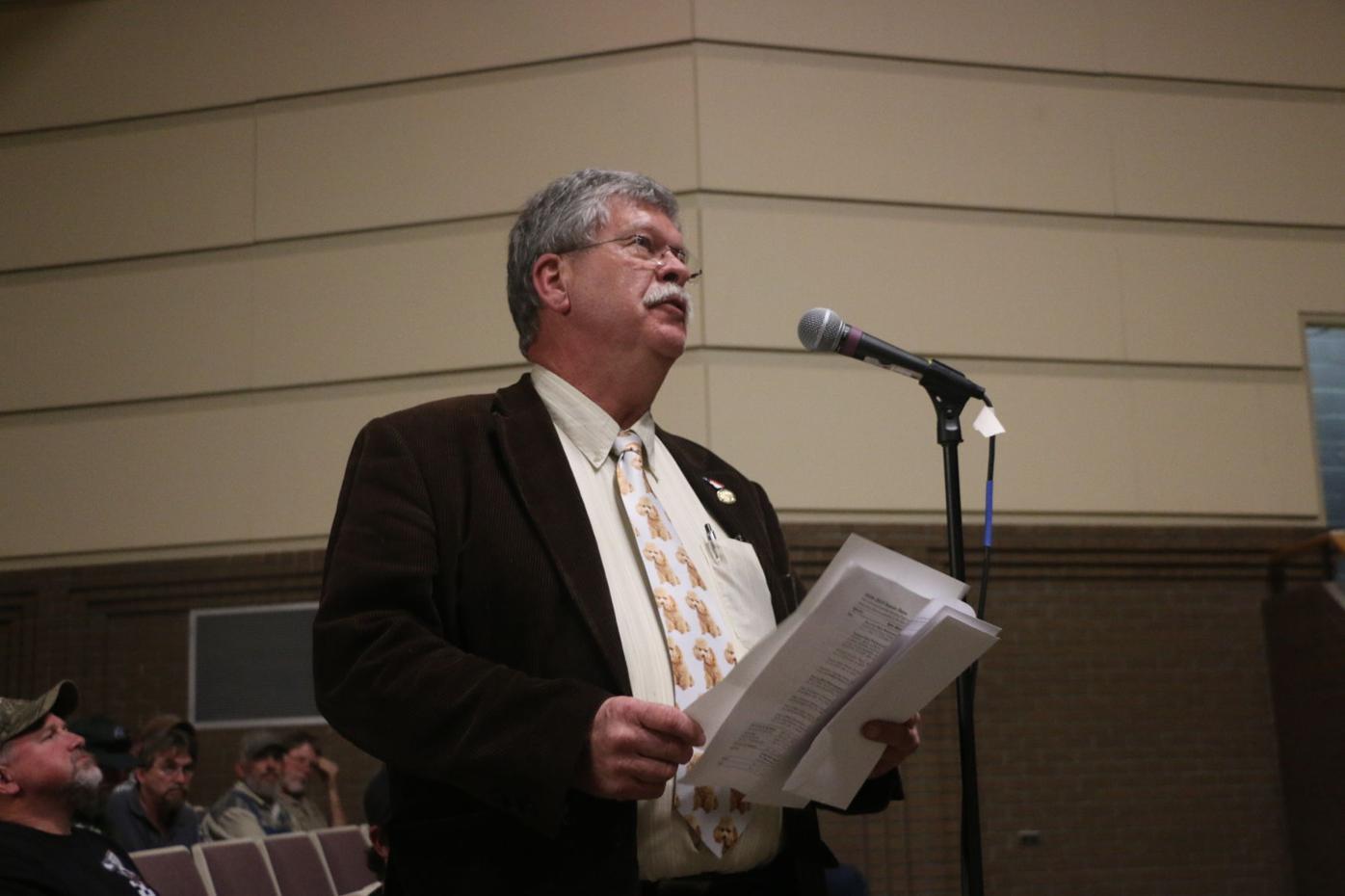 Representative Mike Clampitt prepared a written statement to read to the officials at the hearing. 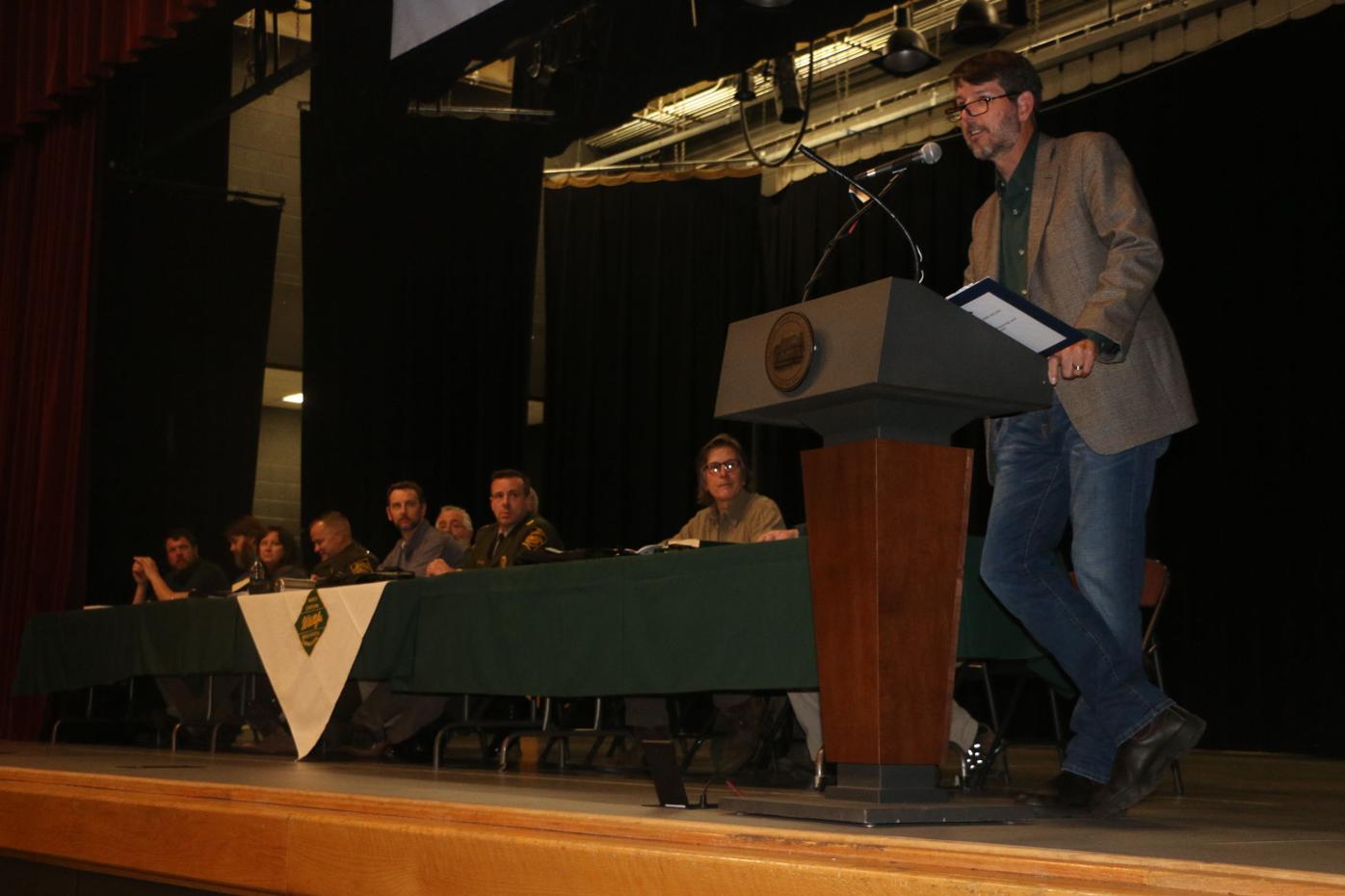 An estimated 270 people attended the hearing.

Brent Hyatt made his voice heard regarding changes in both deer and bear season.

Representatives Michele Presnel and Mike Clampitt took some time before the hearing to mingle with constituents. Seen here are Michael Stiles, left, and Seth Stallard, right, of Cherokee County.

Michele Presnell at an event in Haywood County in February.

Representative Mike Clampitt prepared a written statement to read to the officials at the hearing.

CLYDE — Local deer and bear hunting seasons are set to change, and local sportsmen are not happy.

Well over 200 people filed into the Haywood Community College auditorium Thursday night as a dozen officials from the N.C. Wildlife Resources Commission heard their questions and ideas.

At the meeting were deer and bear hunters from Buncombe to Cherokee County, and most shared the same concerns.

"These are balanced options based on the trade-off between hunter preferences and biological data," he said.

Brent Hyatt, a retired wildlife officer from Jackson County, pointed out what he believed to be some of the more problematic elements of the proposal. He noted that it will be hard to enforce the limits, and that the extended season could decimate the fragile deer population — a population which he said took decades to build to its current levels.

"I went from seeing a small deer herd to a good deer herd, and I oppose the lengthened season. I don't think our deer herd can stand it," he said. "It's took a good time to get what we got, and why would you want to kill that off?"

State Reps. Mike Clampitt and Michele Presnell both weighed in on the topic. Clampitt read from a letter he'd penned to the commission.

"I oppose this change since it eliminates the opportunity for the father and son or daughter hunting experience during the Thanksgiving holiday," he said. "This is usually a rite of passage for families with strong sportsmen heritage."

"I'm also against the change for the overlapping of the deer season and the bear season," he added, noting that it could pose an increased risk for hunting accidents.

Like many others, Presnell didn't want to see the seasons shift.

Presnell also talked about tradition. Specifically, she noted that fathers taking their sons out deer hunting is a time when boys become men.

"And believe me, we need a heck of a lot more men," she said.

Tom Ensley of Haywood County prepared a written statement that covered a large swath of issues, including the overlapping of deer and bear seasons under the new proposal.

"Bear season and deer season should not be at the same time … it looks like this would be a nightmare to police," he said.

Ensley also addressed a recent article in The Mountaineer about the wildlife resource commission's new proposal for controlling the coyote population. While the article noted that coyotes aren't a significant threat to the deer population, Ensley disagreed.

"Tell that to all the fawns that got killed," he said. "They kill countless deer and fawns."

In a particularly telling moment, one man came to the microphone and asked everyone who wants to keep the deer and bear seasons as they were in 2017 to stand up, and almost every person in the auditorium rose to their feet.

Although most stood against the change in regulations, there were a few who voiced support for the expanded deer season.

Jeff Cliffton from Buncombe County said that he doesn't get much time during the week to hunt because of work, so he would appreciate having a few extra Saturdays to get out in the woods. Kyle Childers offered another point.

"I guess I'm the oddball because I'm for it," he said. "Our kids get two weeks out for Christmas. I see that as more opportunity to get time deer hunting with rifle."

The other concern was the harvesting of bucks in too great a number. Edward Rodgers of Haywood County was particularly vocal on this, noting that the harvesting of too many young bucks later in the season will hurt both the population and hunters' ability to bag sizable deer.

And deer hunters weren't the only ones to speak up — several bear hunters had strong opinions on their season, too. The change proposed in the bear season would add two weeks at the beginning of the season.

Steven Broom from Jackson County said that the hearty bear population that has been built up over the years could be put at risk if the season is opened up too early. Like many of the deer hunters, he advocated for keeping the season as it is.

"I think a lot of hunters would rather see a longer (dog) training season than a longer hunting season," he said.

N.C .Wildlife Resources Commission Executive Director Gordon Myers said after the hearing that he was impressed with the attendance, which he said beat out even last year's staggering number.

Myers noted that some of the criticism of the changes in the deer and bear season were expected, and that he was happy to get the feedback from local sportsmen.

"One of the benefits of why face to face is so important is because we can get a sense of the cultural components, which were nicely articulated," he said.

"We heard a lot about that week of Thanksgiving, how culturally important that was," he added.