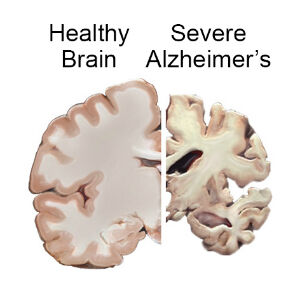 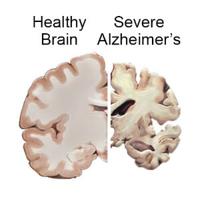 COMPARISON — This National Institute on Aging graphic shows the difference between a healthy brain and one plagued by severe Alzheimer’s disease. 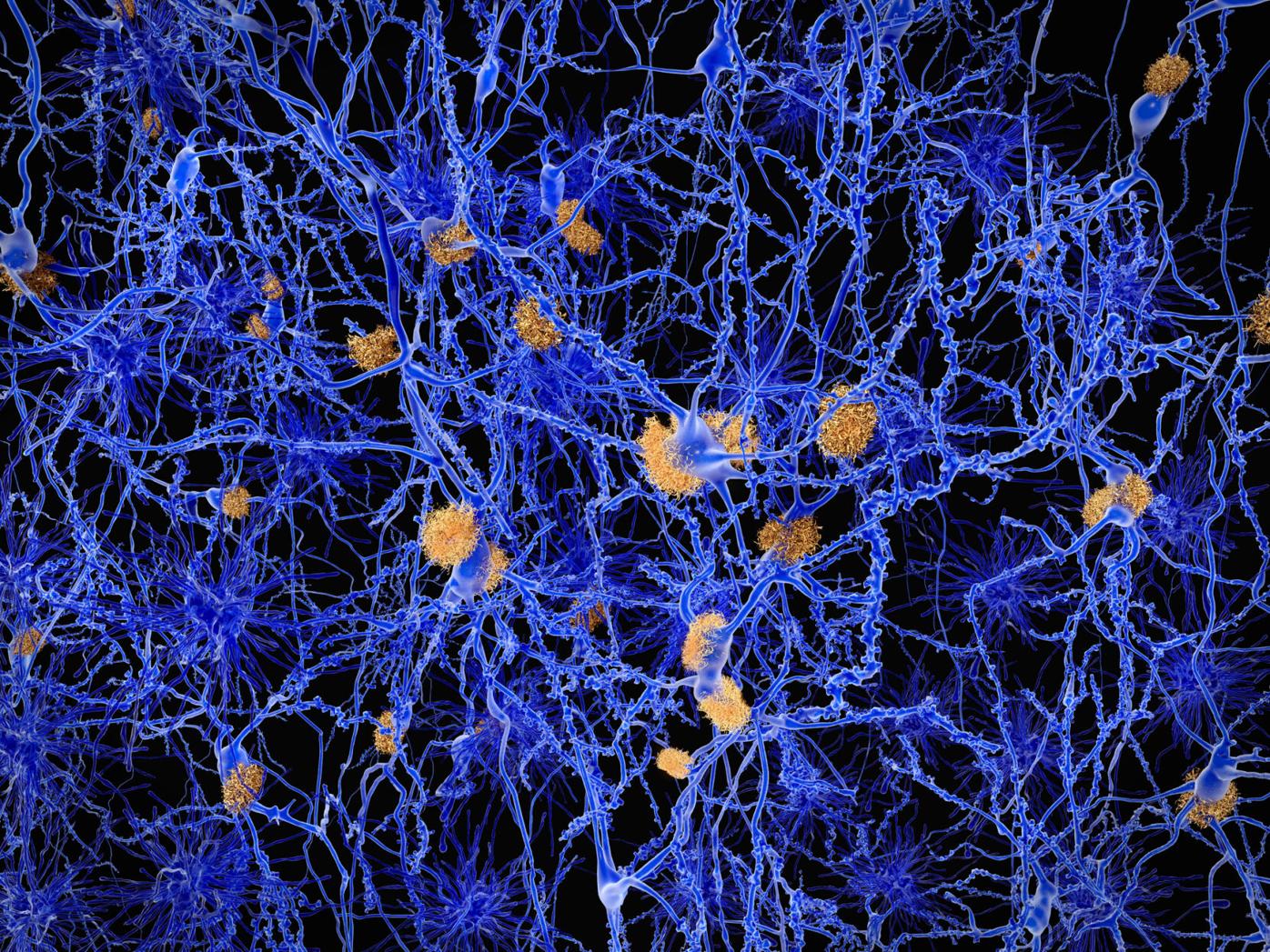 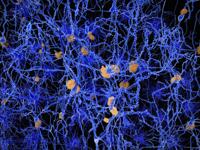 AMYLOID PLAQUES — Amyloid plaques are characteristic features of Alzheimer’s disease. They lead to a degeneration of the affected neurons, that are destroyed through the activity of microglia cells. 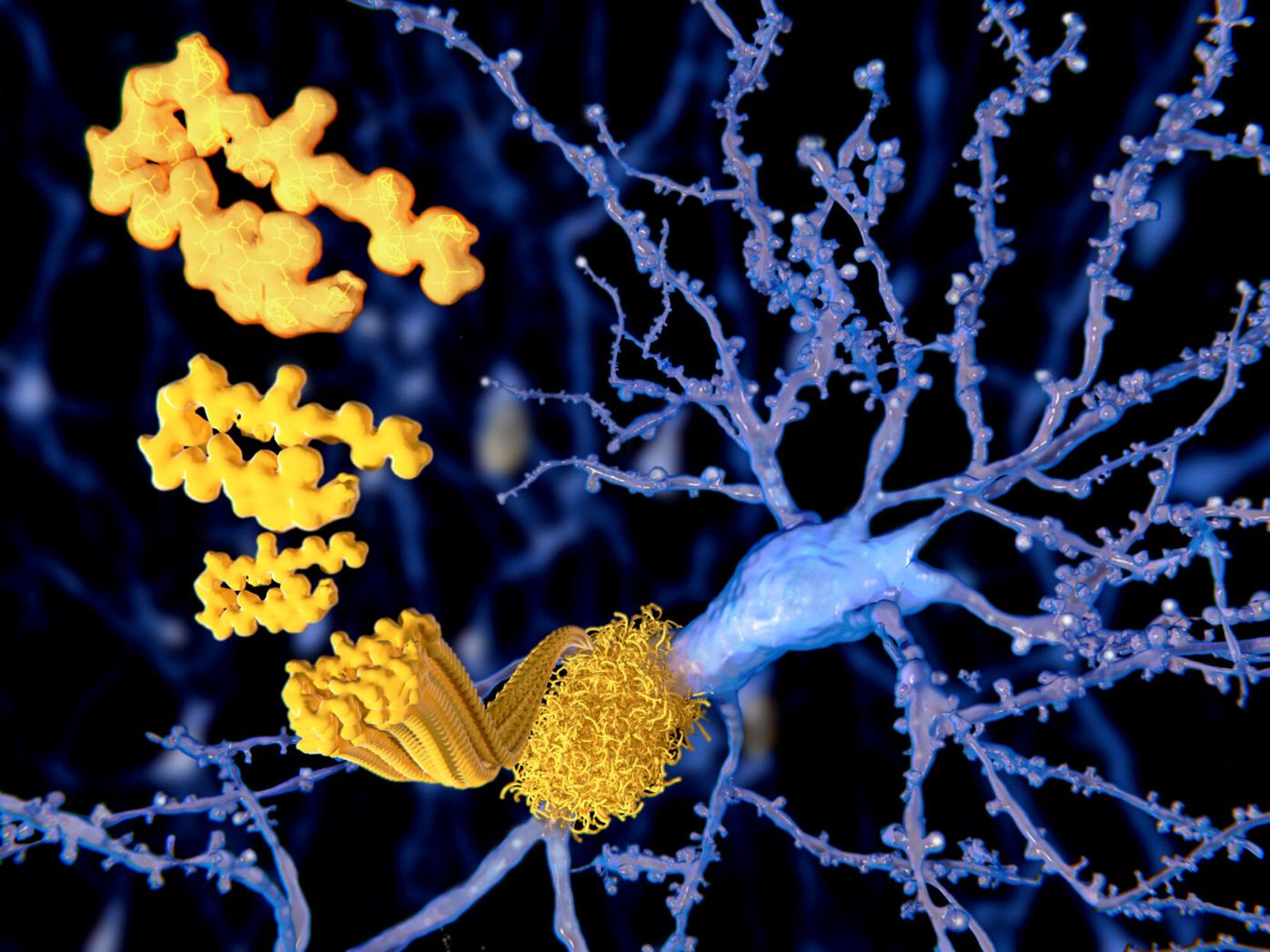 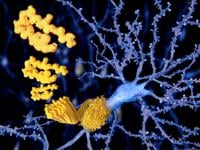 CAUSE OF ALZHEIMER’S — The beta amyloid peptid consists of about 30 amino acids. 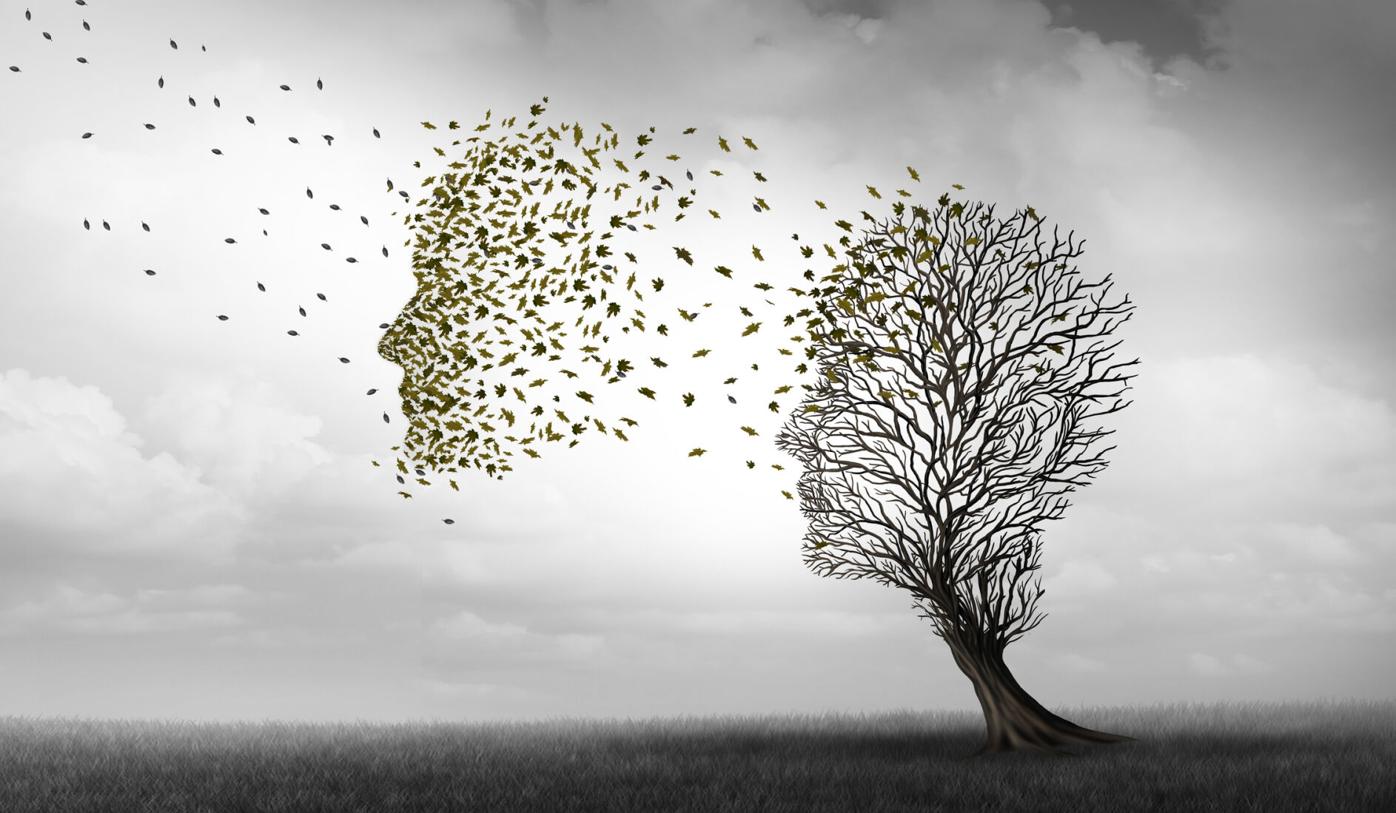 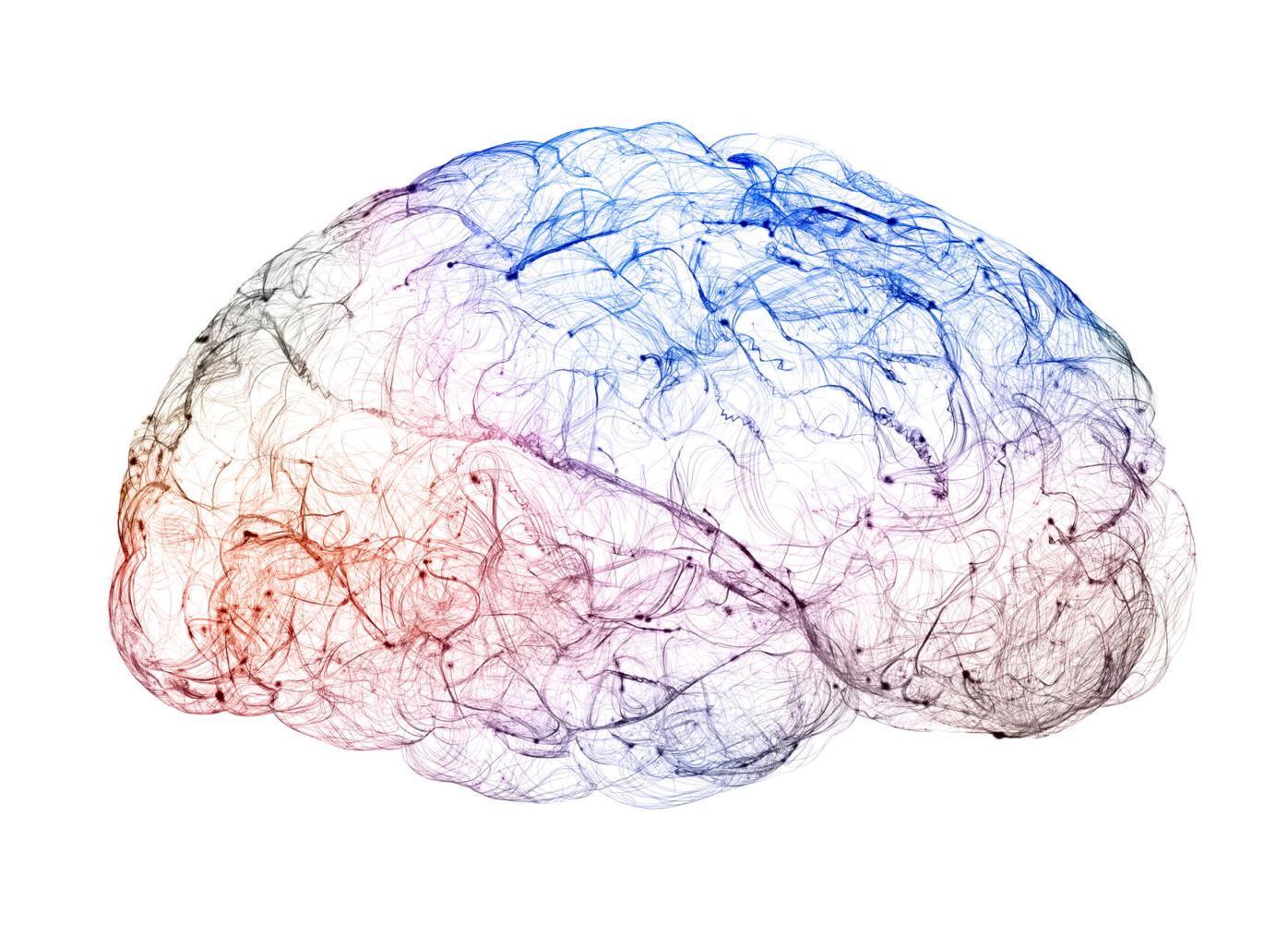 BRAIN CONNECTIONS — The human brain contains tens of billions of neurons — specialized cells that process and transmit information via electrical and chemical signals. Alzheimer’s disease disrupts this communication among neurons, resulting in loss of function and cell death.

COMPARISON — This National Institute on Aging graphic shows the difference between a healthy brain and one plagued by severe Alzheimer’s disease.

AMYLOID PLAQUES — Amyloid plaques are characteristic features of Alzheimer’s disease. They lead to a degeneration of the affected neurons, that are destroyed through the activity of microglia cells.

CAUSE OF ALZHEIMER’S — The beta amyloid peptid consists of about 30 amino acids.

BRAIN CONNECTIONS — The human brain contains tens of billions of neurons — specialized cells that process and transmit information via electrical and chemical signals. Alzheimer’s disease disrupts this communication among neurons, resulting in loss of function and cell death.

Those with an Alzheimer’s diagnosis not only face a slow death, but one where their memories are erased day by day.

Through decades of research, much has been learned about the cause of the most prevalent type of dementia, but doctors can offer little hope of a cure. At best, there are drugs thought to slow cognitive decline, but side effects can be serious, and the prognosis is unchanged.

The Alzheimer’s Association carefully tracks all aspects of the disease and was closely following the development of a new drug from Biogen, the first one in line for U.S. Food and Drug Administration approval since 2003.

In the past month, Aducanumab (Aduhelm™) received accelerated FDA approval, even though clinical trials showed it to be only marginally effective, according to numerous medical journal articles.

The company halted the trials in March 2019 after the trial oversight board determined it would be futile to continue, but the following year, the company announced it had reexamined the data and would continue. The FDA ultimately decided Aduhelm can reduce levels of beta-amyloid plaques in allowing the drug to move forward.

There is no evidence that Aduhelm can restore lost memories or cognitive function, and the trials didn’t measure outcomes — only that the drug reduced the protein-clump plaques partially blamed for causing Alzheimer’s.

The Biogen drug is based on the same concept as the other Alzheimer’s drugs now on the market, which have shown that lowering amyloid plaques has not led to cognitive benefits.

The FDA is requiring a post-approval trial to verify the drug is beneficial and has until 2030 to do that.

In November 2020, an FDA advisory committee voted overwhelmingly against the data presented about the Alzheimer’s drug candidate, according to an article in MedPage Today.

The agency’s reversal led to the resignation of three members of the FDA’s advisory committee, with one FDA’s authorization “made a mockery of the committee’s consultative process,” according to an article in Pharmaceutical Technology.

While drugs may not provide the answer to preventing or reversing cognitive decline, there’s a body of research that shows both are possible.

In his book The End of Alzheimer’s, Dale Bredesen, MD, tells about patients who have reversed the disease or adopted practices that stave it off, despite positive markers for developing the disease.

Through their scientific research, Bredesen and like-minded colleagues have been able to pinpoint the genetic portrait of those particularly at risk for developing Alzheimer’s and have broken the disease down to three different types. One type is exacerbated by toxins, another inflammation and the third by the lack of proper nutrients reaching the brain.

The “sticky plaques,” the amyloid-beta proteins, are indeed present in individuals with Alzheimer’s, but haven’t responded to medications meant to destroy them or keep them from forming. Bredesen suggests that is because the plaques are a protective response to inflammation, suboptimal nutrients or toxic compounds such as mold or bacteria.

This means attacking the plaques in the way all the Alzheimer’s medications approved by the FDA are developed to perform actually strengthens or increases the plaques’ protective efforts.

While the pharmaceutical industry, medical experts and associations dedicated to addressing Alzheimer’s offer no treatment hope, those who follow a path of functional medicine have a different take. It is one that looks to address the disease at its root causes, something they contend can prevent, stop and even reverse the symptoms.

Bredesen points to case studies and examples of large groups who are well-pleased with results to back up their claims.

For those willing to give it a try, the first step outlined in The End of Alzheimer’s is to determine what is creating the cognitive decline — inflammation, toxicity or lack of nutrients.

From that point, a specific regimen called ReCODE is tailored to the individual. All paths, however, rely on following a specific diet, largely ketogenic, and taking various nutritional supplements, depending on which ones are lacking in an individual.

In his book, Bredesen said his research is often met by skepticism, including from a “brilliant physician who had well-documented early Alzheimer’s.” After scoffing at the research, the doctor realized there were no other options, so reluctantly followed the ReCODE protocols.

“After three months, his wife called to tell me he was much improved and he remains so after three years,” he wrote. “He later told me that he had become a believer in the protocol and had started to recommend it for his own patients.”

• Alzheimer’s is a progressive disease, where dementia symptoms gradually worsen over a number of years.

Alzheimer’s is the sixth-leading cause of death in the United States.

On average, a person with Alzheimer's lives 4 to 8 years after diagnosis but can live as long as 20 years, depending on other factors.

More than 6 million Americans of all ages have Alzheimer’s.

Between 200 and 2019, deaths from heart disease have decreased 73% while deaths from Alzheimer’s have increased 145%

• There’s no cure for Alzheimer’s, but there are treatments that may change disease progression, and drug and non-drug options that may help treat symptoms.