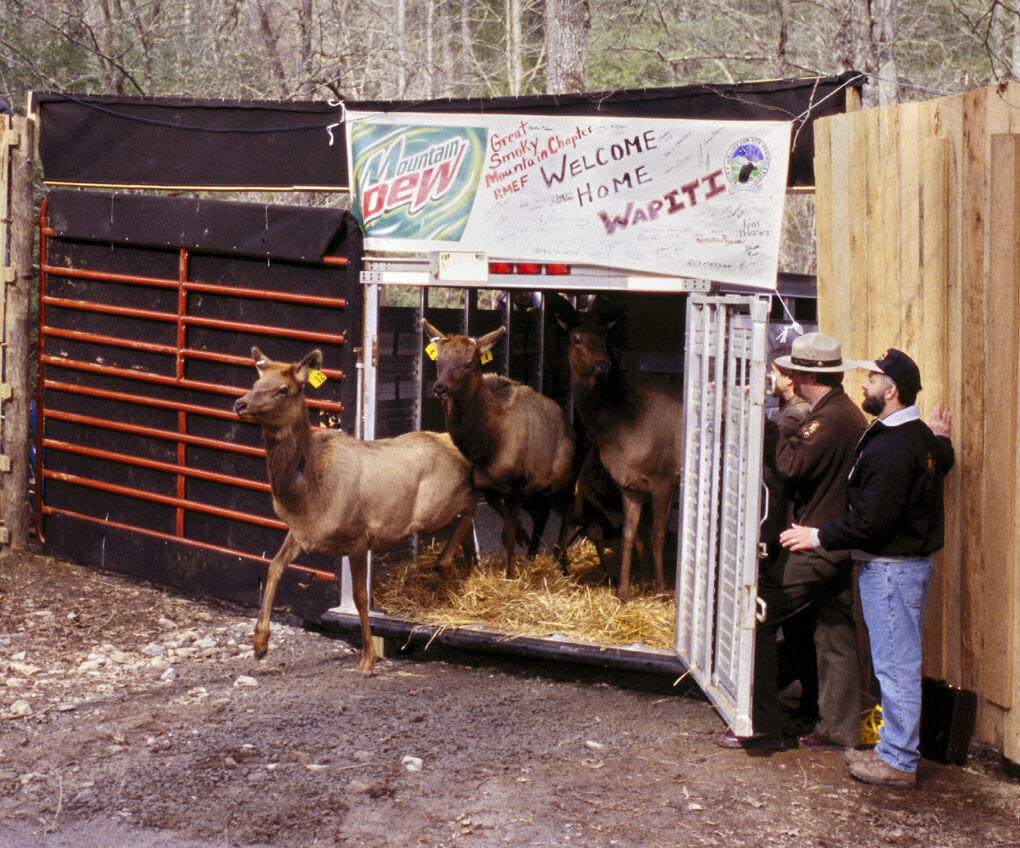 HOME SWEET HOME — The first elk step out of a transport trailer into their new home in Cataloochee Valley on Feb. 2, 2001. Pictured are Mike Tollefson, Superintendent of the Great Smoky Mountains National Park and Tim Queen with the Rocky Mountain Elk Foundation. 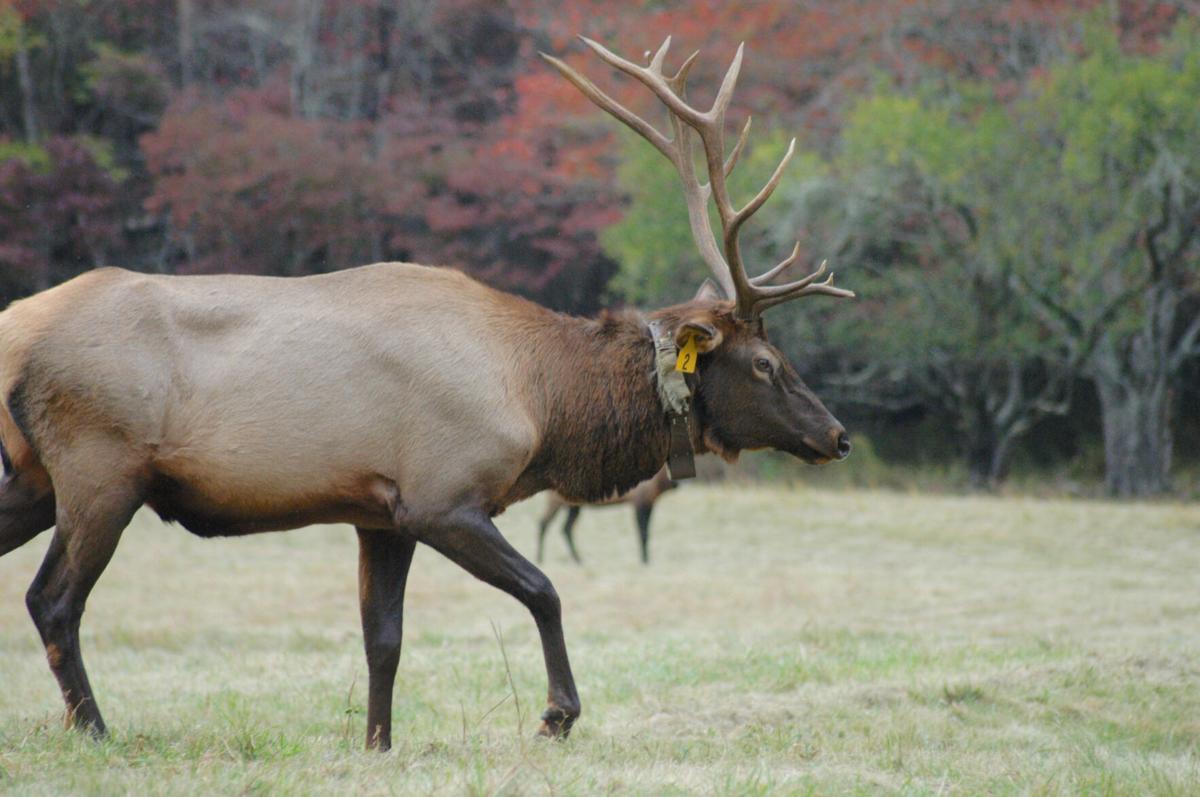 A PATRIARCH — This early photo of one of the original 25 elk brought from Kentucky in 2001 is identifiable by the yellow ear tag. The second batch of elk brought from Canada had red ear tags, which were a far less common sight as the Canada elk weren’t accustomed to people like the Kentucky elk were. 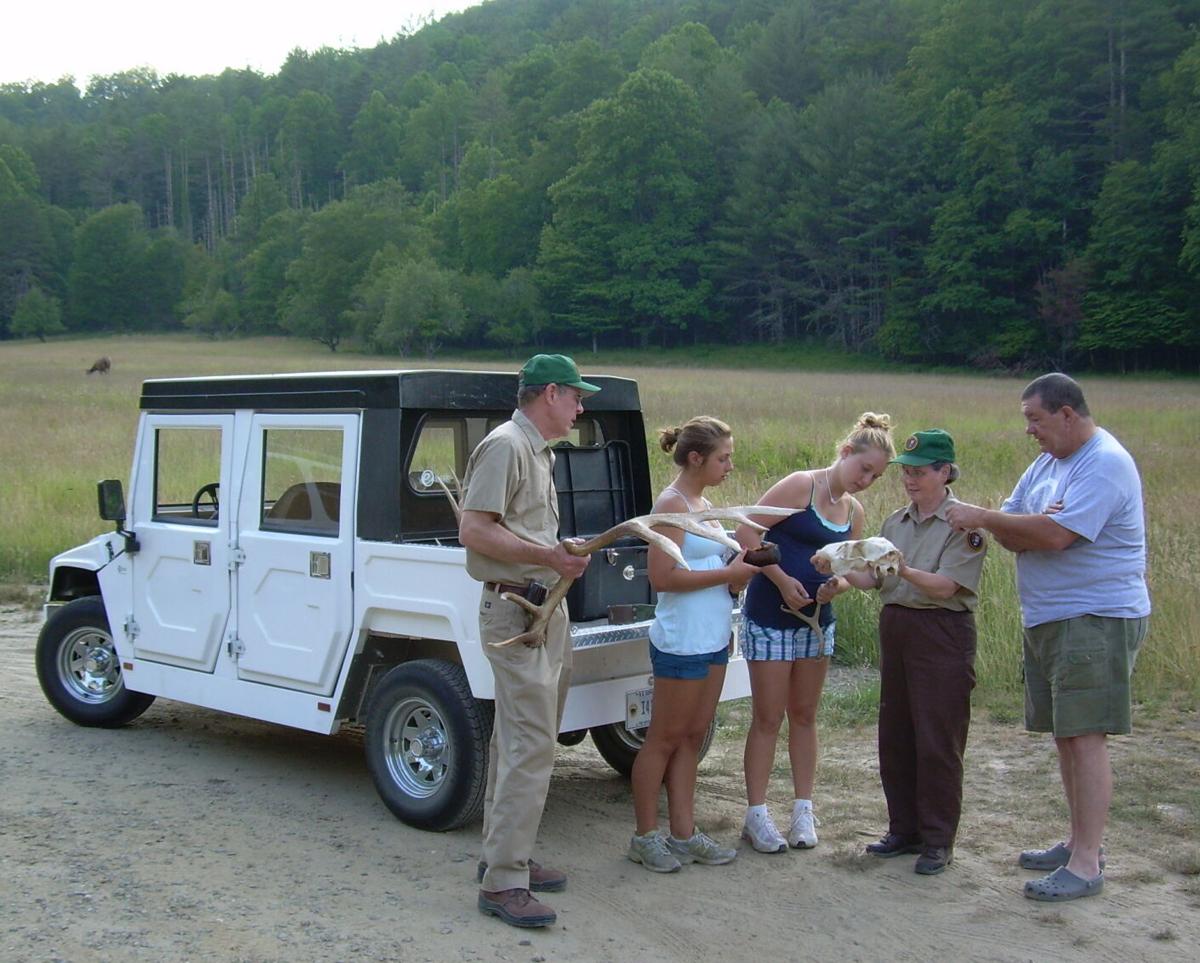 It’s been 20 years since the frosty February morning when elk first touched down on Smokies’ soil here in Haywood County.

Today, the elk are part of our fabric, transforming the county’s cultural landscape as much as its natural one — from the local pastime of Sunday afternoon elk picnics in Cataloochee to elk-seeking tourists by the thousands. Maggie Valley is the official elk capital of the state, the elk is emblazoned on the county’s tourism logo, and there’s even an elk festival.

But 20 years ago, few grasped how the elk would become an icon for Haywood County, growing from a meager herd of 52 to more than 200 in just two decades.

“It is much more successful than most people ever imagined,” said Jim Blyth of Maggie Valley and owner of Elk Country Realty. “Those of us involved in the release had a vision it would turn out the way that it has, but I don’t think the community anticipated how people would come from all over to see the elk.”

Blyth was among the invite-only crowd that gathered in Cataloochee Valley for the first elk release in the winter of 2001. As he climbed atop the wooden viewing platform overlooking the elk’s acclimation pen, Blyth knew he was witnessing history.

“It is probably one of the highlights of my life, helping to bring back an animal that roamed here 175 years ago before they were hunted to extinction,” said Blyth, a member of the Rocky Mountain Elk Foundation that championed the elk reintroduction.

The viewing gallery fell silent, save the sound of camera shutters, as they waited for the trailer gate to swing open.

Conflicts between elk and people have been an unavoidable side effect as the herd expanded out of Cataloochee over the past 20 years. Read about it here.

Ken Wilson, the official photographer for the elk project and former publisher of The Mountaineer, still remembers the day.

“I was really concerned about getting the right shot,” said Wilson, who set his film to motor drive to capture the moment.

Wilson chronicled the elk project from start to finish, including the round-up of those first 25 elk in Kentucky that would pioneer the Smokies’ herd.

Click here to see a photo gallery of the elk release, including the elk round-up in Kentucky and the first year of the elk's acclimation in Cataloochee.

“Every step was approached with an amount of anxiety and hope that everything would go well,” he said.

Documenting the first calf born here — the Virginia Dare of the herd — was “the greatest thrill of all,” Wilson said.

As elk calving season approached in June, park rangers kept close watch on the handful of pregnant females. When one finally ventured away from the herd — a sign it was ready to drop its calf — they bushwhacked back and forth through dense underbrush for the better part of a day before spotting it.

For Blyth, the crown jewel of the elk release came during the first fall mating season, when the haunting calls of male elk echoed off the mountainsides ringing Cataloochee.

“We couldn’t wait to hear an elk bugle in Cataloochee Valley, so that was a big day — the first rut,” Blyth said.

Back in 2003, when the elk were but a fledgling herd, Blyth predicted the iconic role the elk would eventually have. He named his new real estate firm Elk Country Realty and began looking for an elk statue to place in front of it. A local antique dealer, Steve Metzger, promised to keep his eye out for one.

He hired a crane to lift the cast-bronze elk onto a flatbed trailer and followed along behind as it made the trip from Waynesville to Maggie Valley.

“It was like being in a parade,” Blyth recalled. The statue is now on permanent loan to the county’s tourism agency.

Elk are no doubt the most compliant of the Smokies’ large iconic mammals, a surefire bet when it comes to wildlife viewing.

“One of the challenges has been managing their popularity,” said Joe Yarkovich, the Smokies resident elk biologist.

As elk watchers skyrocketed in the years following the initial release, tourists would meander among the grazing elk in the fields of Cataloochee. Once, an antlered elk head-butted a photographer.

“Nobody got hurt, but it was close,” Blyth recalled.

The park formed the Elk Bugle Corp, made up of volunteers who serve as elk docents, trolling the roadside viewing areas and sharing elk-viewing etiquette.

Visitation to Cataloochee was 65,000 a year before the elk came. It nearly quadrupled in a few short years, before leveling off to around 100,000 annually.

One reason for the decline is there are simply so many other places to see the elk as the population has expanded, but the elk continue to capture the public’s imagination.

“You still have the local crowd that comes every single day to see the elk,” Yarkovich said. “It’s a good cathartic experience to spend some time with wildlife.”

Click here to see a photo gallery of the elk release, including the elk round-up in Kentucky and the first year of the elk's acclimation in Cataloochee.

The first elk brought to Cataloochee Valley 20 years ago held on by a thread during those early years, the herd's future far from guaranteed. Read about the challenges and what the future has in store in print and online Wednesday.

Keeping the peace between elk and people

As the elk have expanded beyond the borders of Cataloochee Valley over the past two decades, their presence in Haywood County hasn’t been with…