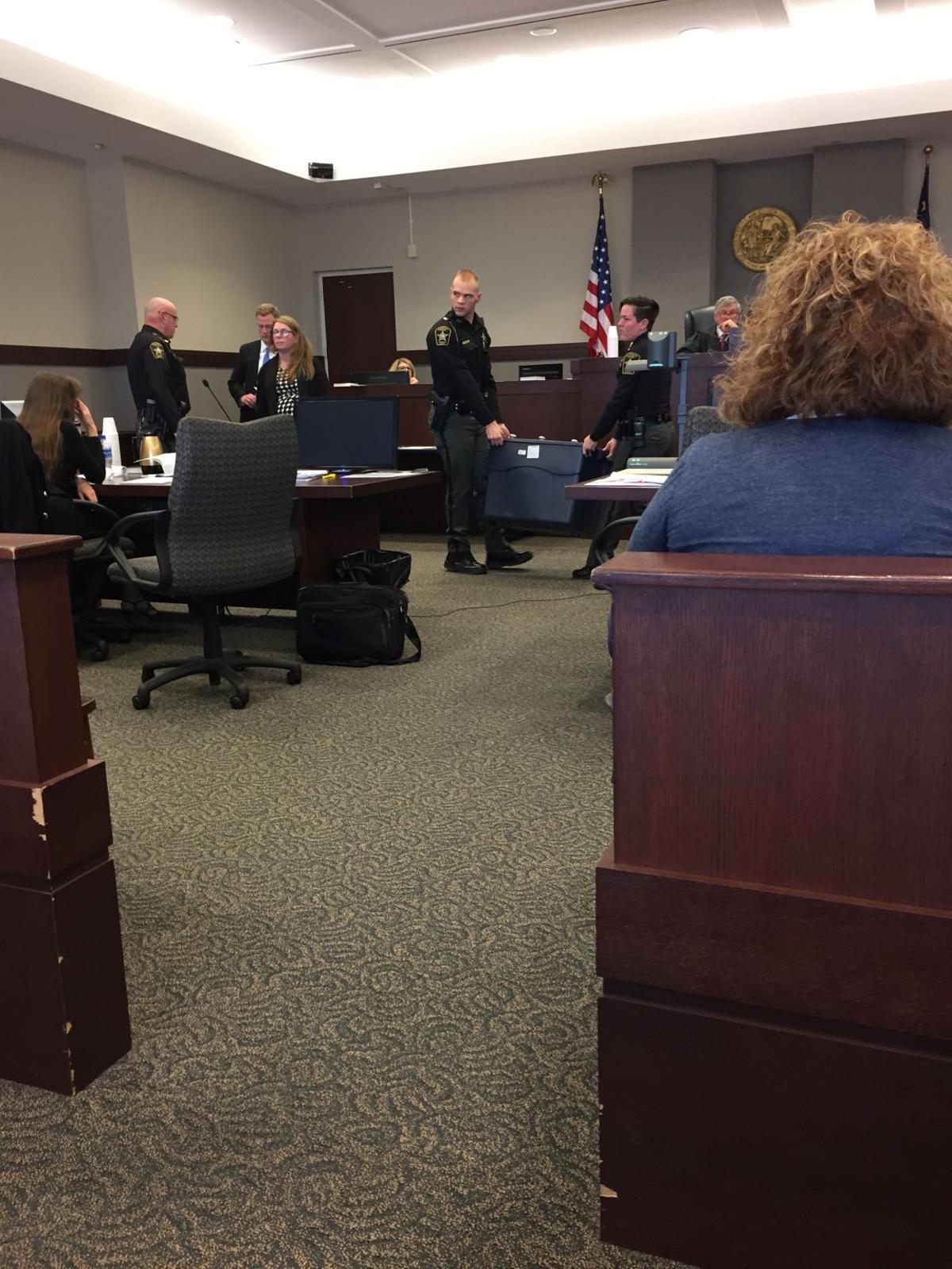 ON DISPLAY — Deputies hauled the moonshine across the courtroom so the jury could see it. 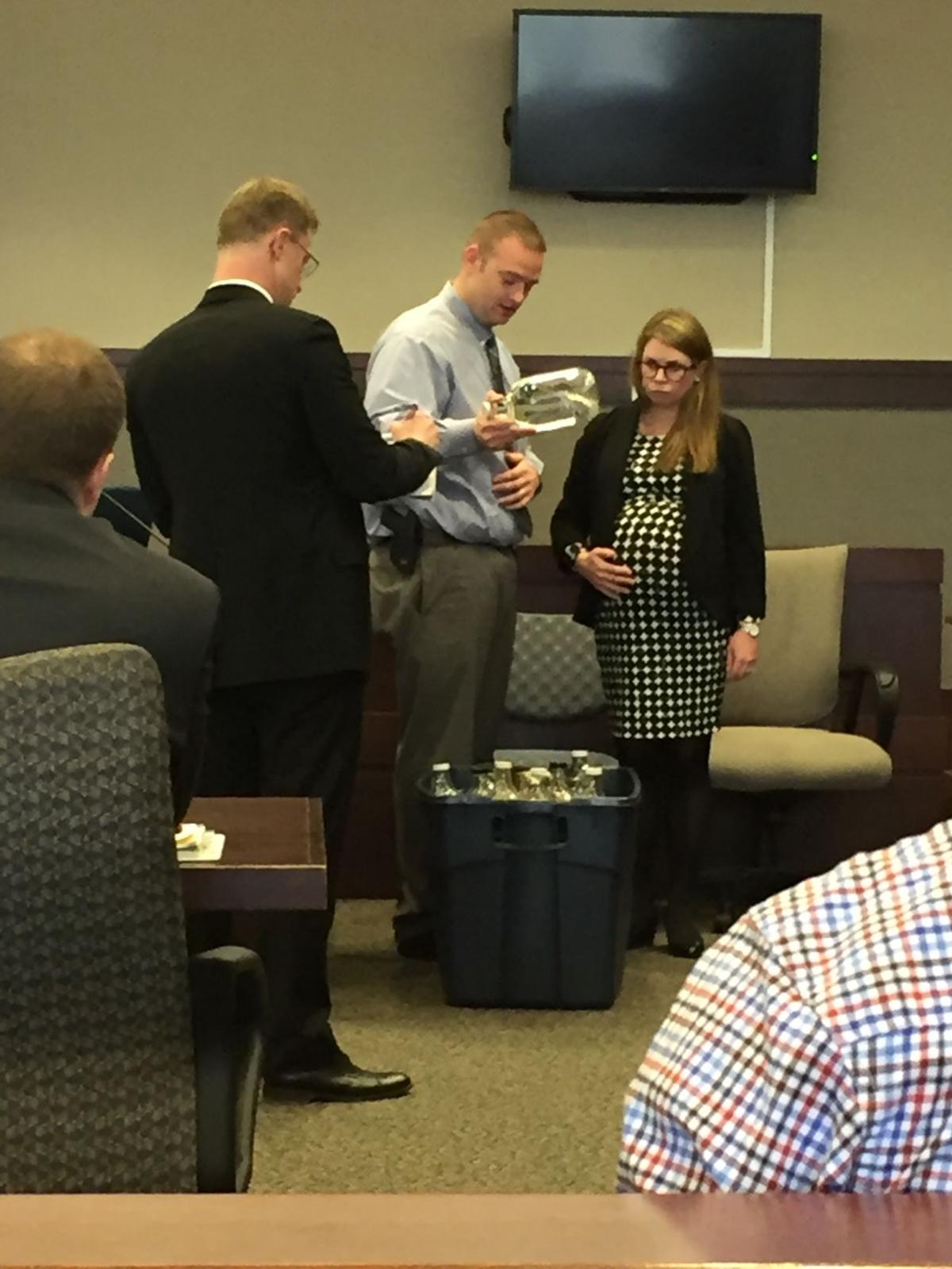 Detective Rinehardt shows the courtroom some of the moonshine. 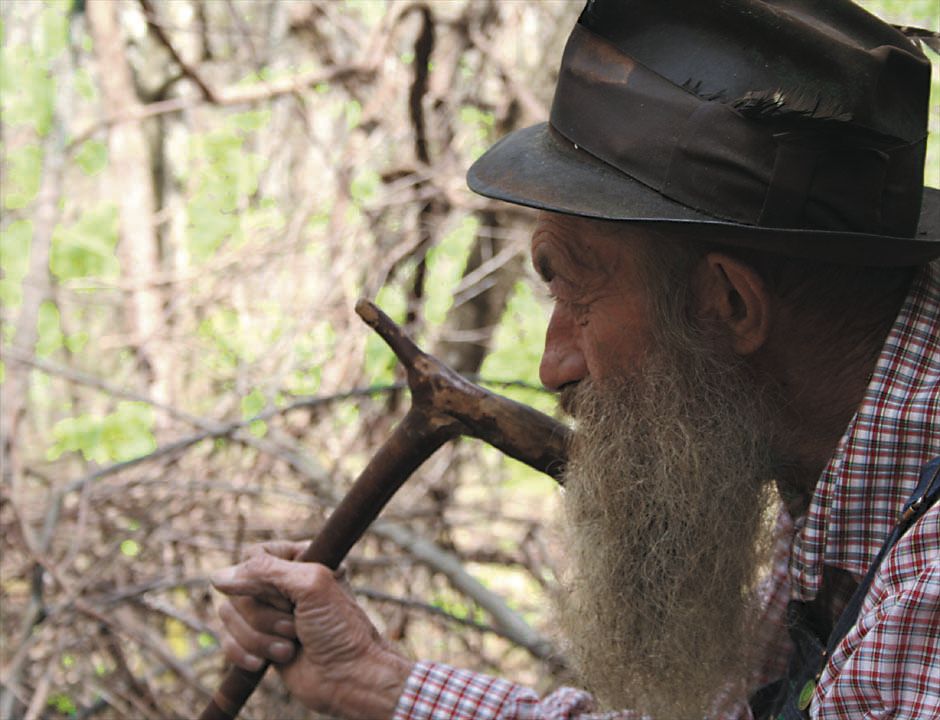 Marvin “Popcorn” Sutton before he was apprehended for selling non-taxed alcohol. 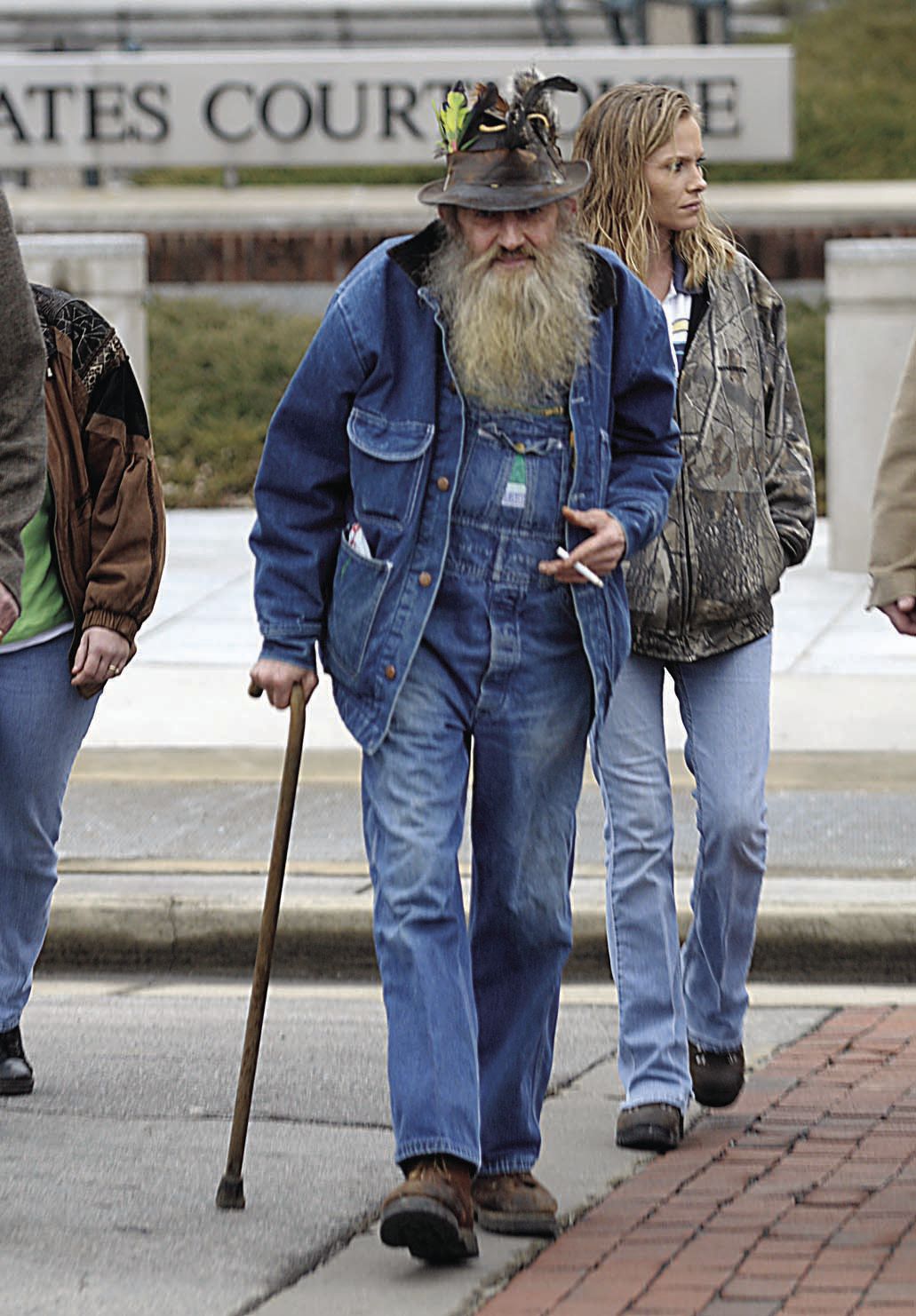 POPCORN — Haywood’s notorious moonshiner Popcorn Sutton is seen here after he was sentenced to eight months in prison for distilling spirits. He died of carbon monoxide poisoning in March 2009 just days before he was to report to prison. 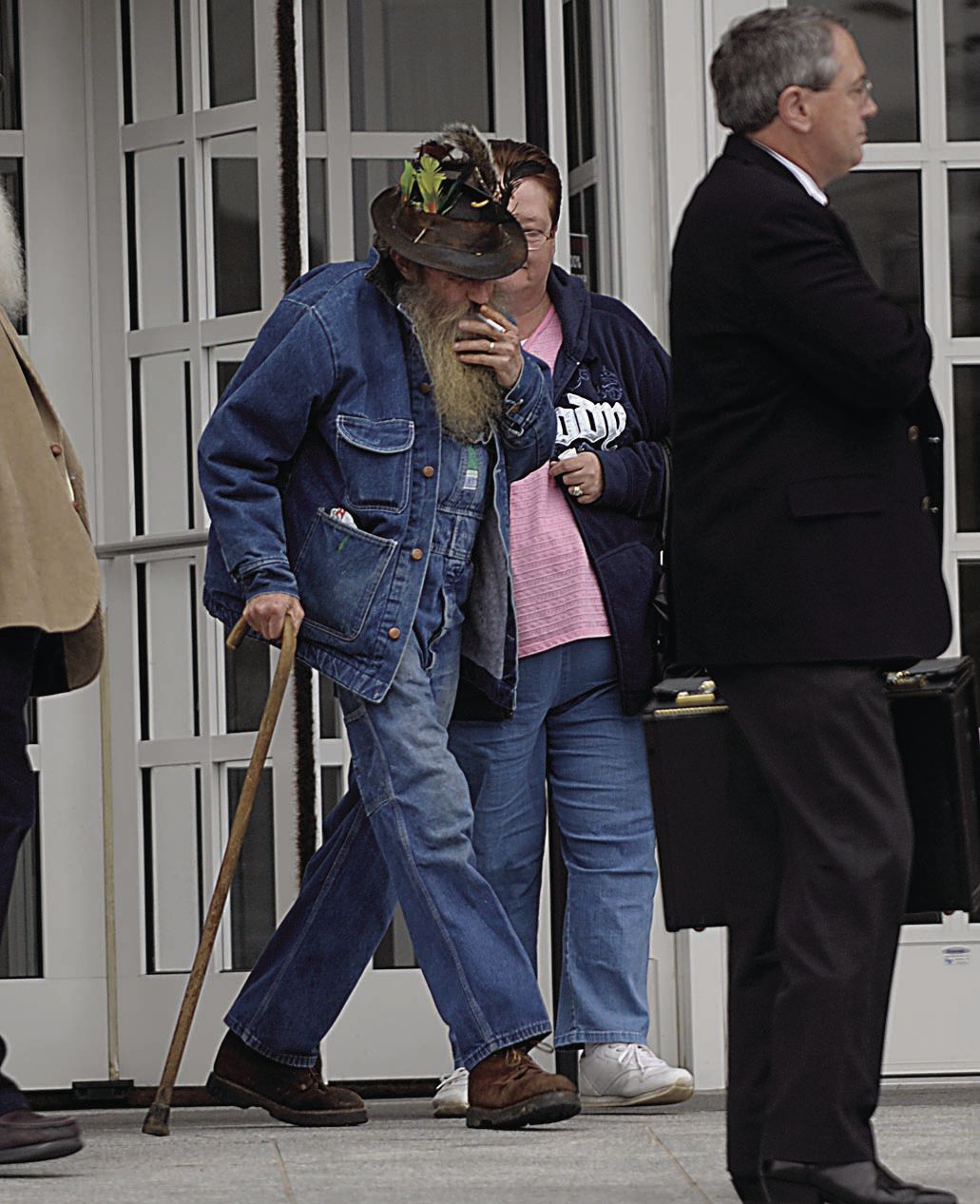 IN COURT — Marvin “Popcorn” Sutton on his court day. 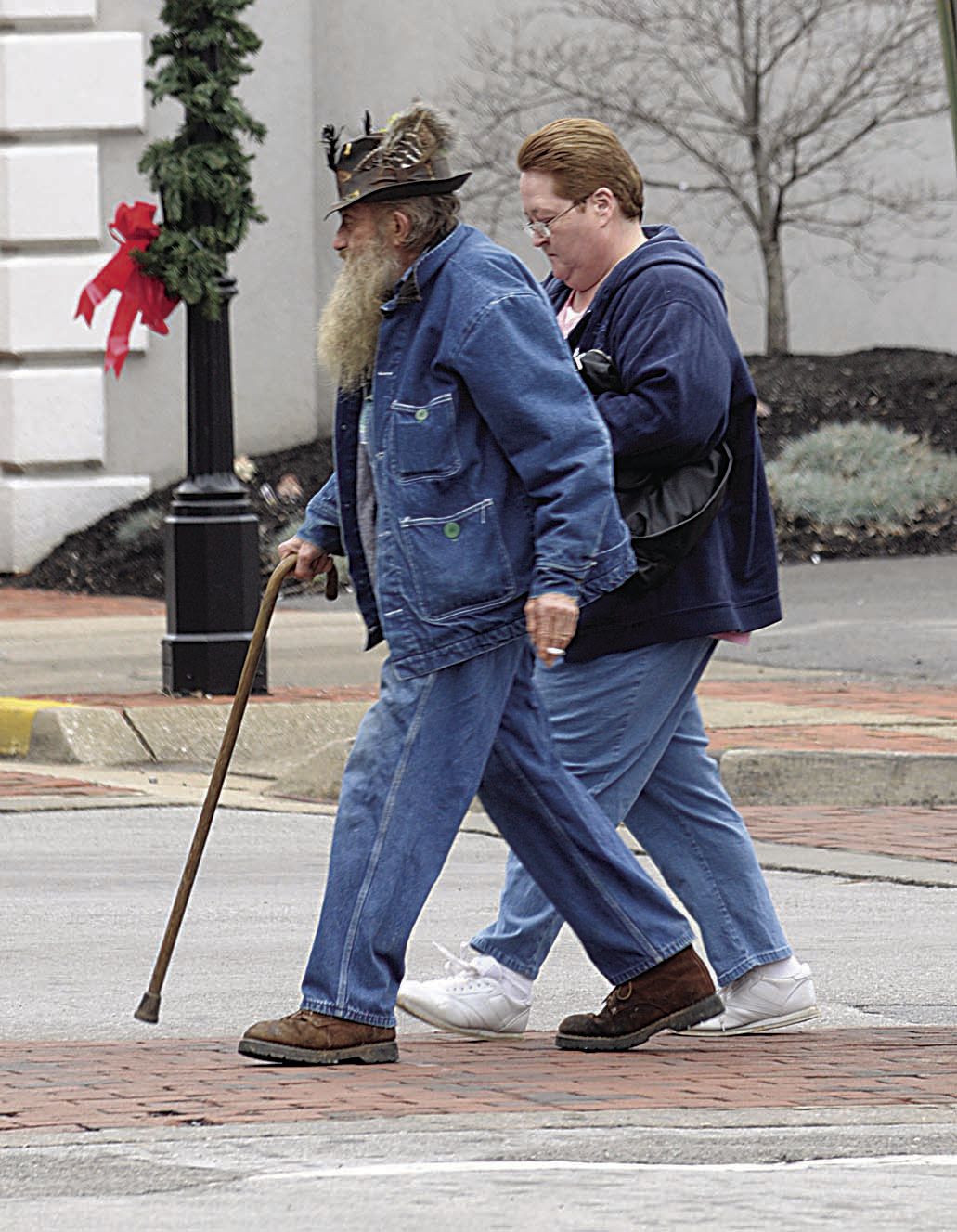 ON DISPLAY — Deputies hauled the moonshine across the courtroom so the jury could see it.

Detective Rinehardt shows the courtroom some of the moonshine.

Marvin “Popcorn” Sutton before he was apprehended for selling non-taxed alcohol.

POPCORN — Haywood’s notorious moonshiner Popcorn Sutton is seen here after he was sentenced to eight months in prison for distilling spirits. He died of carbon monoxide poisoning in March 2009 just days before he was to report to prison.

IN COURT — Marvin “Popcorn” Sutton on his court day.

A woman trying to keep moonshine she claims once belonged to Popcorn Sutton learned Wednesday it will be poured down the drain.

The saga of Michelle Lynn’s liquor took a turn in December 2016, when Haywood County Sheriff’s deputies responded to a call at Lynn’s residence.

When she consented to a search of the property, deputies found marijuana and moonshine, or non-tax-paid liquor, as it was called in court.

Up to and during her trial, Lynn seemed more upset about the prospect of losing the liquor than she ever seemed about being convicted. She said the liquor belonged to the legendary and now deceased moonshiner Popcorn Sutton, who she claims was a close relative, and possesses both sentimental and historical value.

After the February 2018 trial, Lynn was convicted only of maintaining a dwelling for a controlled substance and got no prison time.

“[Michelle Lynn] stated that the moonshine was her inheritance from Popcorn Sutton,” Deputy Ken Stiles told the jury. “She said it was moonshine he had made.”

After a hung jury on the moonshine charge, a second trial was scheduled, but when the detective handling the case left the sheriff’s office, it was dismissed.

One week later, Lynn filed a motion to get the moonshine back, and the state responded by filing a response on April 2, 2019, asking that the alcoholic beverages be destroyed.

The judge ultimately denied Lynn’s motion to preserve the liquor and ordered its destruction. Lynn had been claiming the liquor was initially seized by deputies in 2008 but that some was given back and eventually bequeathed to her.

Letts’ order states that Capt. Tony Cope testified that in 2008, deputies seized Sutton’s liquor from “a Dellwood Road Storage Unit.” Cope further testified that all 797 gallons of liquor had been dumped into the water at the Waynesville sewage treatment plant.

“He further explained he specifically remembered this event because it took the Haywood County Sheriff’s Office two days to pour out all the liquor,” Letts’ order reads.

While taxes allegedly hadn’t yet been paid on the liquor in 2016 when it was seized from Lynn, she eventually provided the court a receipt and stamps indicating that on June 21, 2019, she paid $230.40 to settle up. On July 5, 2019, Lynn filed an affidavit asserting that the alcohol should be returned since the taxes has been paid.

“The defendant has shown no proof that she possesses the requisite license to legally possess the alcohol … (per state law), it shall be unlawful for any person to possess any alcoholic beverage for sale without first obtaining the applicable ABC permit and revenue licenses,” the state replied in a memo.

Agent Steve Myers of the Alcohol Law Enforcement division of the SBI, now retired, testified during Lynn’s trial that “illegal liquor can’t transmogrify into lawfully possessed liquor simply by paying taxes to the N.C. Department of Revenue,” according to Letts’ order.

“Only a local ABC Board or a properly licensed distillery can pay excise tax on liquor,” it reads.

The order gave deputies 30 days to destroy the liquor but was immediately appealed.

Lynn was eventually assigned local attorney Meredith Vuotto to represent her on the matter by the Office of the Appellate Defender. However, it was decided that she ultimately didn’t have to represent Lynn.

On Oct. 7, 2019, appellate defender Glenn Gerding sent Letts a letter saying that because the case wasn’t criminal but rather “an appeal of the denial of her petition to return some bottles of liquor that were seized from her possession,” there was no obligation to defend her.

“Please let me know if you are aware of another source of authority for the appointment of counsel in a matter such as this, and if you would like to discuss the appointment further,” that letter reads. “Otherwise, I will not assign counsel to represent Ms. Lynn and she will need to retain counsel or proceed pro se for an appeal.”

On Nov. 14, Vuotto officially withdrew from the case. The appeal already filed, Lynn was on her own to navigate the process, which she failed to do. On June 18, the state filed a motion to dismiss the appeal for failure to “perfect,” the appeal, which means she failed to follow the procedural timeline. After being delayed for months due to the COVID-19 pandemic, the case was heard Sept. 30 in front of visiting Superior Court Judge R. Gregory Horne.

At last week’s hearing, Assistant District Attorney Kate Robinette, who has handled the case on the state’s behalf, argued for the dismissal of Lynn’s appeal.

“It’s actually right outside this courtroom in a closet,” she said of the liquor.

Horne, who had no prior knowledge of the complex case going into the hearing, took a fair amount of time to review the file and ensure he had a handle on the details. His chief concern was that he may not have jurisdiction to dismiss the appeal if anything had previously been filed by Vuotto on Lynn’s behalf that wasn’t in the file here in Haywood.

“My hesitation is, if something was filed by someone at the court of appeals, do I even have the jurisdiction to dismiss this?” he said.

Horne dismissed the appeal and put Letts’ order back into effect.

Lynn became upset and wanted to read letters she’d brought attesting to the liquor’s historical value but wasn’t allowed to. One written by Neal Hutcheson, an NC State senior research scholar who directed a 2008 Emmy-winning documentary about Sutton, wrote that he believed the moonshiner “sought to produce a product worthy of moonshine’s privileged position in the regional heritage.”

“[Sutton] was an actual person, both good and bad, who lived as much as possible in the ways of his forefathers, and he is now part of our State and Nation’s history,” Hutcheson wrote. “The fact that some of his liquor survives is no small matter; it is a minor miracle. Moonshine is not just an illegal product, state’s evidence, but a powerful emblem of heritage and shared history.”

When Lynn wasn’t allowed to read the letters in front of the court, she became emotional and angry. Horne warned her to conduct herself in accordance with the rules and that she could be held in contempt if there were additional outbursts

“You don’t want to go down that road,” he said.

Lynn quickly and quietly left the courtroom. Horne’s order stated that Letts’ order is to remain in effect.

Lynn subsequently filed a stay of the destruction, which may have bought her a bit more time. But for Lynn, delaying a foregone conclusion isn’t the goal. She still wants the liquor back, no matter how unlikely that now seems.

“He’s history, a historic figure in Haywood County,” she said in an interview Monday. “People used to come from all around to see him and get his liquor. Anywhere I go, as soon as I say I’m from Maggie Valley, people ask about Popcorn Sutton. Now I’m fighting for the last bit of his liquor there is on this earth.”

Lynn told The Mountaineer she hoped to donate the liquor to the Shelton House for an exhibit.