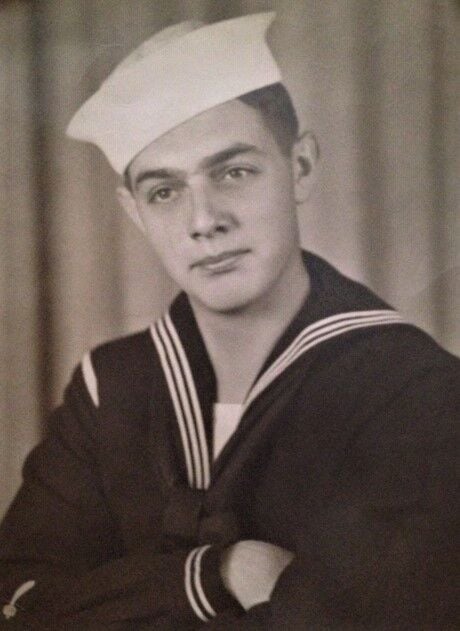 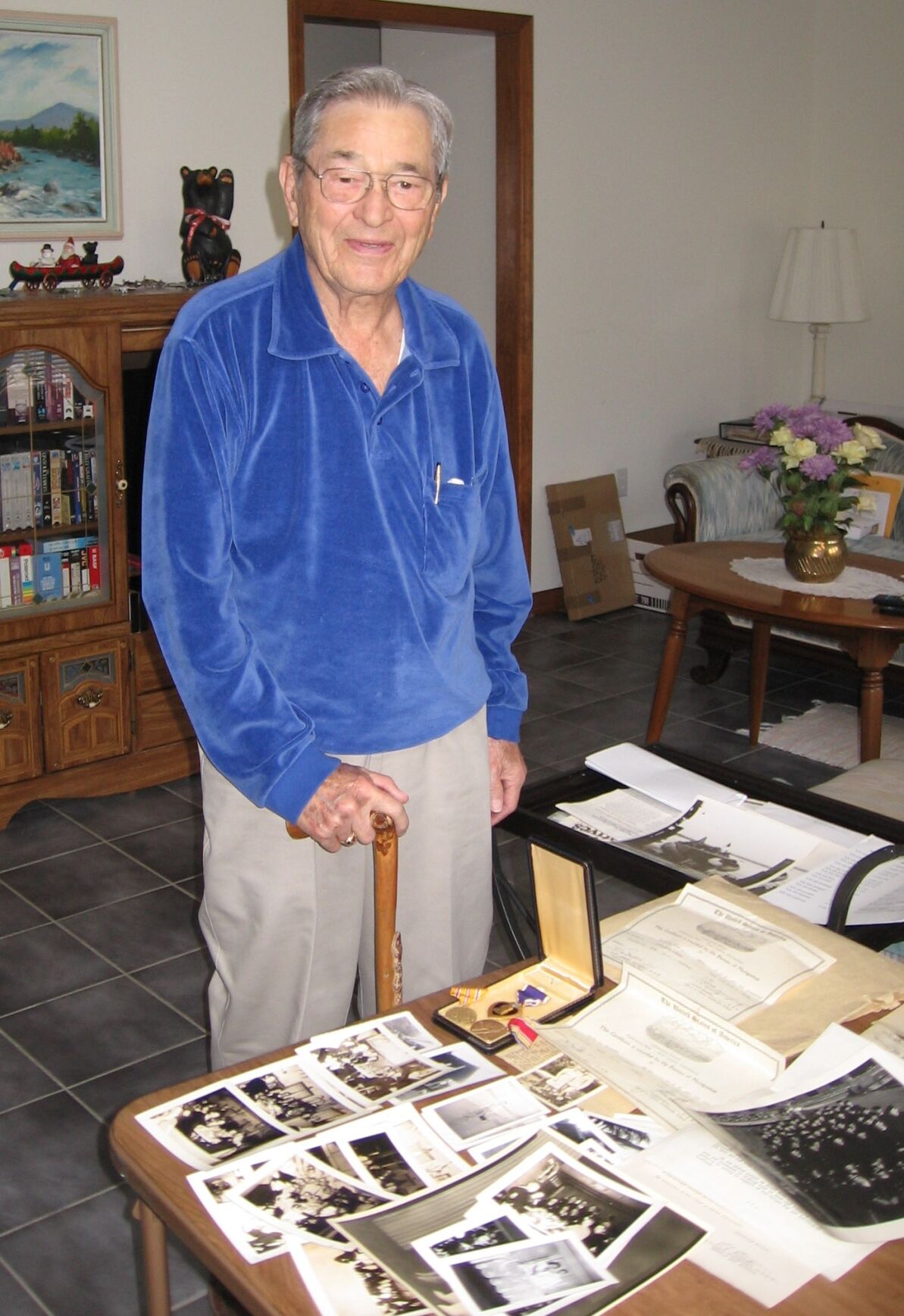 A TRIP DOWN MEMORY LANE — Sam McCrary looks through his photographs in 2009. 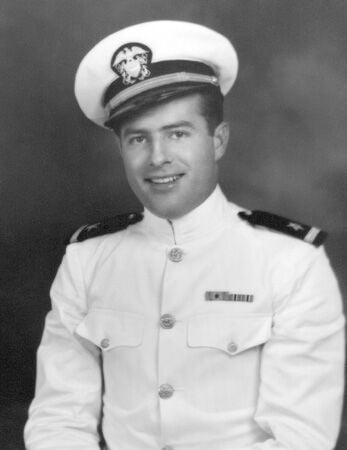 A TRIP DOWN MEMORY LANE — Sam McCrary looks through his photographs in 2009.

As dates go, Aug. 6 is especially important in the 75th anniversary commemoration of the end of World War II. On that day in 1945, the American bomber Enola Gay dropped an atomic bomb on Hiroshima, Japan, thus setting in motion the steps that would lead to the surrender of Japan.

Less well known is the fact that the U.S. Navy suffered an important loss on that same date. Just after 8 a.m. Aug. 6, at roughly the same time that Enola Gay was beginning her bomb run, a Japanese plane on patrol off the island of Bali caught an American submarine on the surface of the Java Sea. The pilot attacked, his bombs found their mark, and the sub sank with all hands.

The USS Bullhead (SS 332) turned out to be the last of 701 U.S. Navy ships lost in World War II. The loss of an entire submarine crew at the end of a long and awful war was a sad story in its own right, yet the submarine has never rated more than a footnote in the history books. As storylines go, it’s hard to compete with the atomic bomb.

Eighty-four brave sailors perished when Bullhead sank. One of those was from Haywood County.

Lt. j.g. Paul Austin Gossett was one of nine officers aboard Bullhead. Gossett, the son of JH and Ethel Gossett, graduated from Clyde High School in 1934 and worked for a few years at American Enka before joining the Navy.

When the war came, Gossett volunteered for submarine duty and was eventually assigned to the crew of Bullhead in July of 1944. The following month, he made his last trip home to marry Catherine Moody of Waynesville.

War correspondent Martin Sheridan accompanied Bullhead on her first war patrol in the spring of 1945 and got to know Gossett. He found the “short, affable Southerner” to be good company and enjoyed the stories he told of his family in the mountains of North Carolina.

The Mountaineer reported on the loss of Bullhead and Gossett’s status as missing — it took time for the crew to be classified as presumed dead — on Aug. 30, 1945.

The story was surrounded by articles about the Japanese surrender and plans for local victory celebrations.

Gossett’s wife, parents, and siblings had to deal with the disconnect of processing their shock and sorrow amid the jubilation that accompanied the end of the war. As with other Bullhead family members, they were on their own, victims of bad timing as much as their loved ones on the submarine. It was a lonely place to be.

To make matters worse, the secretive and unique nature of submarine warfare meant that the location of the wreck would remain unknown. There would be no remains to repatriate and no grave to visit. Paul would never come home.

Among those most grieved by Gossett’s death was his close friend Sam McCrary, also of Haywood County. McCrary served in the Navy as well, and upon returning from the war eventually married Gossett’s widow and became a well-known businessman in Maggie Valley. But he never forgot the memory of the man who had looked after him “like a little brother.”

Another young sailor with Bullhead ties would eventually make his home in Waynesville. Warren Kitts entered the Navy upon graduation from Knoxville High School in 1943. Following boot camp, he volunteered for submarine service and trained as a torpedo operator. In early 1945, Kitts was assigned to Submarine Division 302 in Fremantle, Australia, the unit responsible for Bullhead plus five of her sister boats.

Word eventually came down to Kitts that Bullhead needed a torpedo man and that he should prepare to join that crew. But fate intervened when he injured his hand on a training dive. The gash was deep enough to prevent him from getting an active assignment until his hand healed, and so he was shuffled back into the deck of the relief crew.

Kitts’ number came up again later, this time to join the crew of USS Becuna (SS-319), another one of the boats operating out of Fremantle. It was on that submarine that the young seaman finally got into World War II. He had just completed a war patrol and disembarked Becuna at Subic Bay when the war ended. It was there that he learned that Bullhead had gone missing.

Submariners are a tight-knit group, and Kitts’ time in Fremantle had put him into direct contact with Bullhead and her crew. Moreover, some of the guys he had been with since sub school had been assigned to the submarine as replacements and were aboard when she went down.

Kitts mustered out of the Navy after the war, became a dentist courtesy of the GI Bill, and married his hometown sweetheart. The couple moved to Hazelwood in 1955, where he opened his practice. The remainder of his life revolved around family, church, and his beloved garden. But through it all, he remembered friends who had died aboard Bullhead, and he carried the weight of that loss in his heart until his death in 2004.

So as we remember Aug. 6, let’s pause and remember the submarine that sailed out of Fremantle and into eternity 75 years ago. Let’s remember Sam McCrary, Warren Kitts, and the hundreds of other local citizens who saw the war through to its conclusion. Above all, let’s remember Lt. Paul Gossett and the other sons of Haywood who gave the last full measure for country in history’s largest conflict.

Waynesville native Ken Kitts is the youngest of four children of Warren and Betty Kitts. He lives in Alabama with his wife, Dena, and their two sons. He is writing a book on the loss of the USS Bullhead.